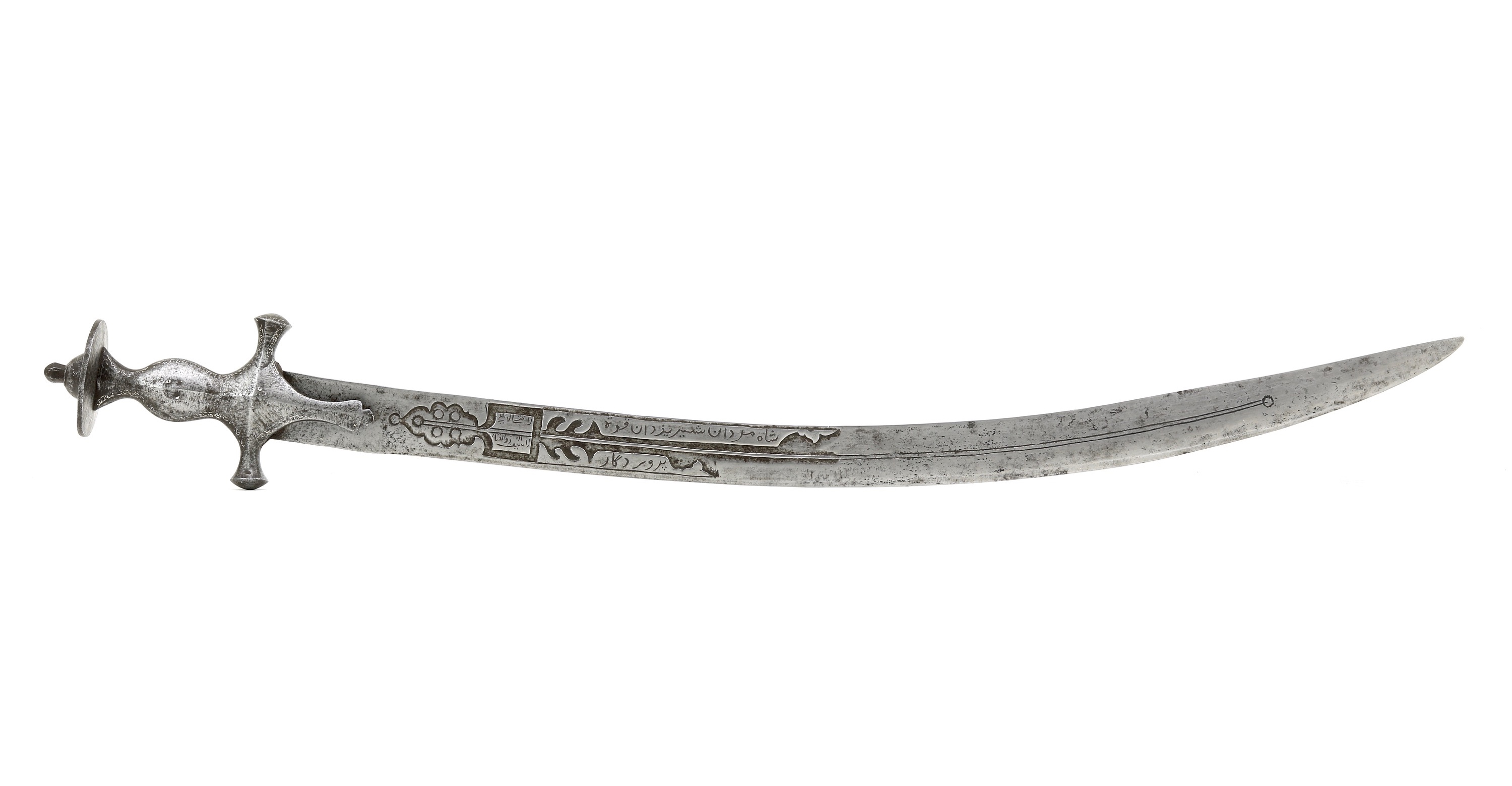 From a European collector

There is a small group of Indian talwar with blades that are chiseled in mamluk form. We have had one with a purely Indian talwar style blade that was related to the Maharajah of Ratlam, dated 1744-1755 with a hilt dated 1759, which was sold earlier this year. Another, with a much more Persian-style blade, is listed here which has a hilt that points towards Punjab manufacture.

The third example in this style. This one is simpler and more humble in execution than the preceding pieces. The wide blade is of typical Indian talwar form, with a moderate curve, two narrow grooves on each side, and an edge bevel that starts a few centimeters from the hilt.

Like with the others, the Mamluk style blade decor only features on the right side of the blade.

On the little square it is written in Arabic:

Along the line, in Persian:

The King of [Brave] Men, the Lion of God, the Power of the Creator

It is very interesting to see the Persian inscriptions use two Persian words to refer to God: Yazdān ﻳﺰﺩﺎﻥ (with ancient Iranian origin “Creator of the Good”) and Parvardegār ﭘﺮﻭﺭﺩﮔﺎﺭ (also with Persian origin meaning “Creator”).

On the left side of the blade is written in a mix of Arabic and Urdu:

"Ali the friend of God, a Talwar, which means “the Chosen of God”."

It is mounted in a talwar hilt of classic Punjabi style. Hallmarks of this style are the slightly forward inclined guard quillons, and the comparatively fat-bellied grip section. They are often of hakim khāni style where there is no pronounced V between grip and guard.

The hilt comes with traces of silver decoration, now largely gone through handling but the crosshatched underground remains to be seen. The work consisted of decorative borders and roundels.

A relatively humble fighting talwar but with Mamluk style blade decorations that put it in a rare and illustrious group of pieces with similar decor. It is not the first of this group to have hints towards a Punjabi origin.

The text is very Islamic in nature but references to the mythical sword of Ali, Ḏū l-Fiqār, are also found on Hindu swords at times, such as our Rajput talwar from Ratlam referenced above. A result of centuries of interaction between Hindus and Muslims in northern India.

Notes
1. Thanks to Abdallatif Ali Alnakkas and Dr. Manouchehr M. Khorasani for helping with the translation of this part.