Narrowest at base 33 mm

A large military khukurī of the second world war era, formerly in the John Powell collection.

The blade is relatively thin for its size, making it behave more machete-like than the heavier standard Ghurka military pieces. It was perhaps a specially commissioned piece. The blade has two narrow grooves or khol (खोल्) running up to the shoulder, called pāto (पातो). From then onwards the blade is decorated with stylized floral engravings resembling creeper plants. Edge shows signs of repeated field sharpening.

It is fitted to the hilt with an iron bolster. The wooden grip flares out resembling a fishtail, a profile often seen on khukurī of this period. It has its typical raised ridge to provide extra grip, and a relatively broad band of stylized floral decoration. Some of the usual longtitudinal cracks related to the shrinkage of the wood, but the hilt remains tight.

The scabbard is the standard black leather over wood. It comes complete with its back pockets including the karda (कर्द) and cakmak (चक्मक्), and the pouch for tinder called khisā (खिसा). The chape is made of sturdy iron. Some losses to the scabbard and a split in the side. See photos.

The blade bears a fine dot punch marking on the left side;

Many soldiers served in India and Burma so these years and places don't add much to our understanding of the khukurī owner. Although it is notable that British soldier Lt. Col. John P. Cross, who served in the Ghurka Brigade of the British Indian Army, first saw action in Burma as well. He became a Nepalese native and wrote many books about Nepal and his service with the Ghurkas.

The battle of the island of Ramree, also known as Operation Matador, was a relatively small operation that may tell us more about the owner of the khukurī.

The island of Ramree was occupied by a Japanese garrison of the II Battalion, 121st Infantry Regiment lead by Colonel Kanichi Nagazawa with an estimated 1000 men. The Allied side sent in the 26th Indian Infantry Division, 1 squadron 146th Regiment RAC and the 3 Commando Brigade. It was to be an astonoshing victory for the allied side, where only 20 Japanese survived and an estimated 500 perished, the other half managed to escape the island in time. 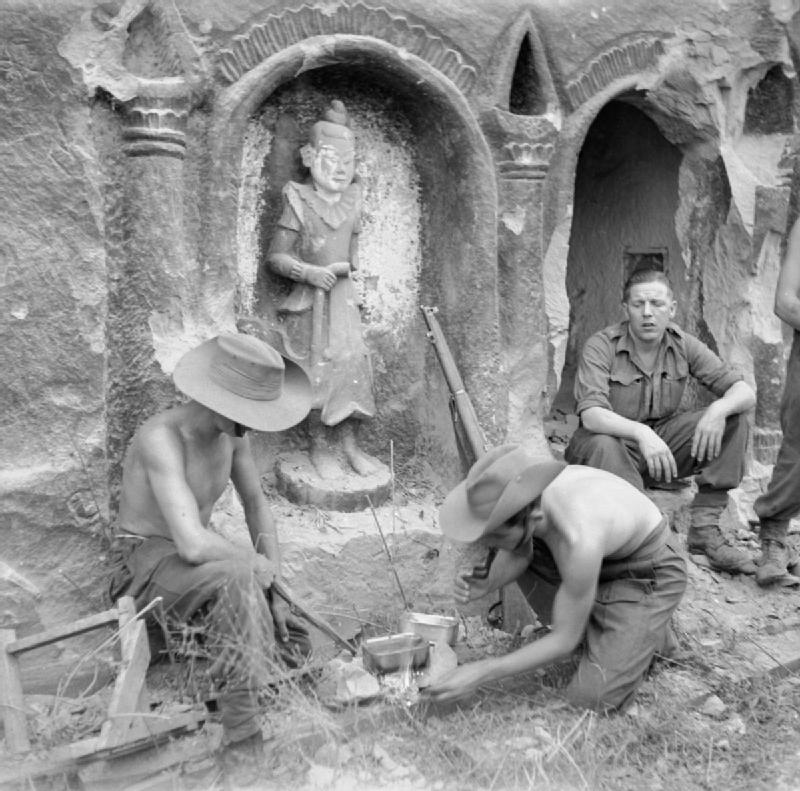 Men of the Wiltshire Regiment from the 26th Indian Infantry Division preparing a meal beside a temple on Ramree Island.
Photo by Wackett A (Sgt), No 9 Army Film & Photographic Unit.
Imperial War Museums, SE 2209. (Collection no. 4700-64)

I have not been able to find more about the soldier, Ricky Milnes, but American and British troops did serve in Ghurka Regiments during World War 2 so perhaps a next owner can find out more about this individual. It is also possible he didn't serve directly with Ghurkas but got inspired to obtain a khukurī along the way.

A large World War 2 era khukurī that is inscribed with the name of its former user, Ricky Milnes, who served in India, Burma, and finally on the island of Ramree which resulted in an astonishing Allied victory. The khukurī eventually made its way to the John Powell collection, and through a collector found it's way here.

Now looking for a new home to continue its adventures. 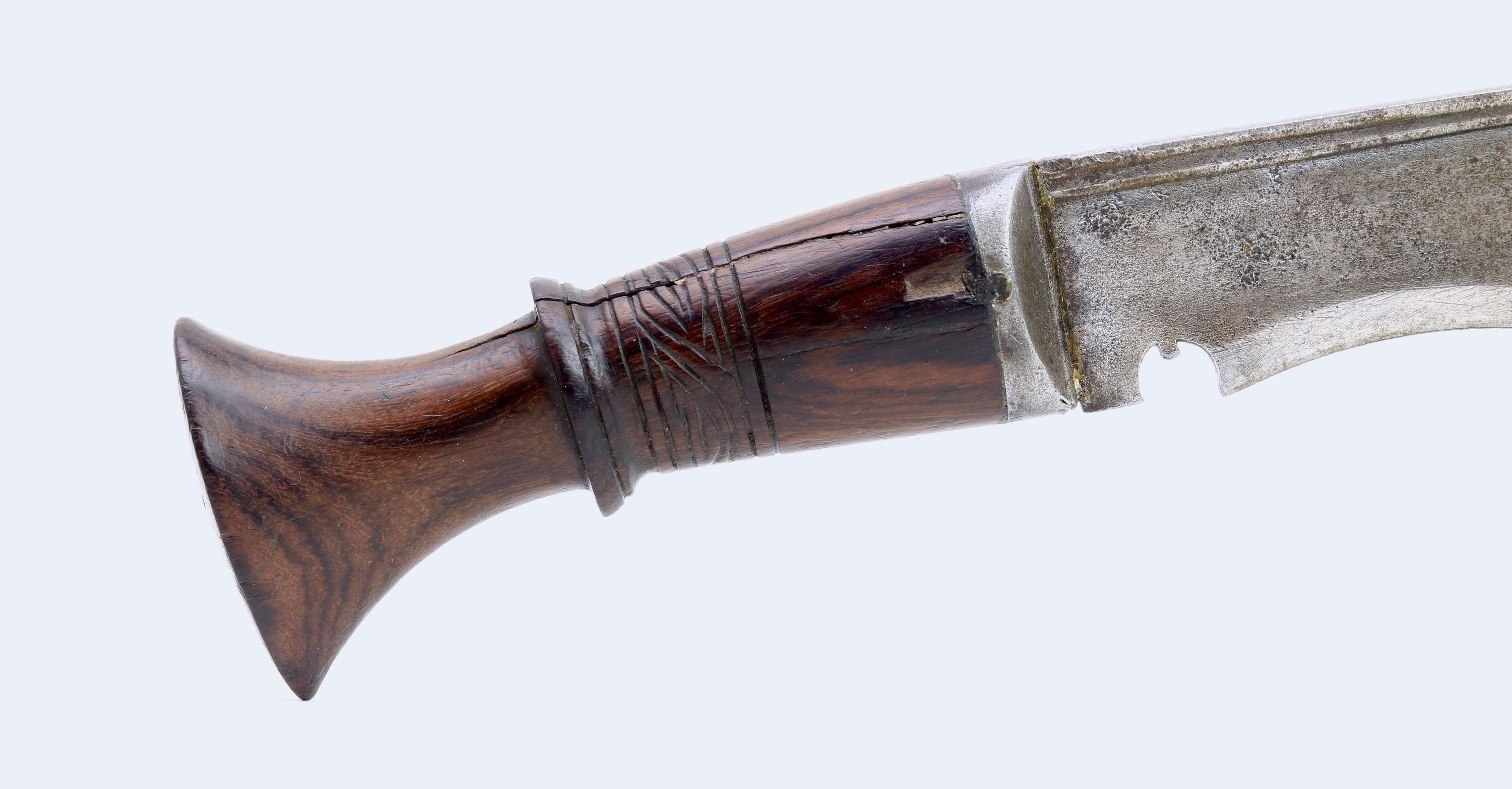 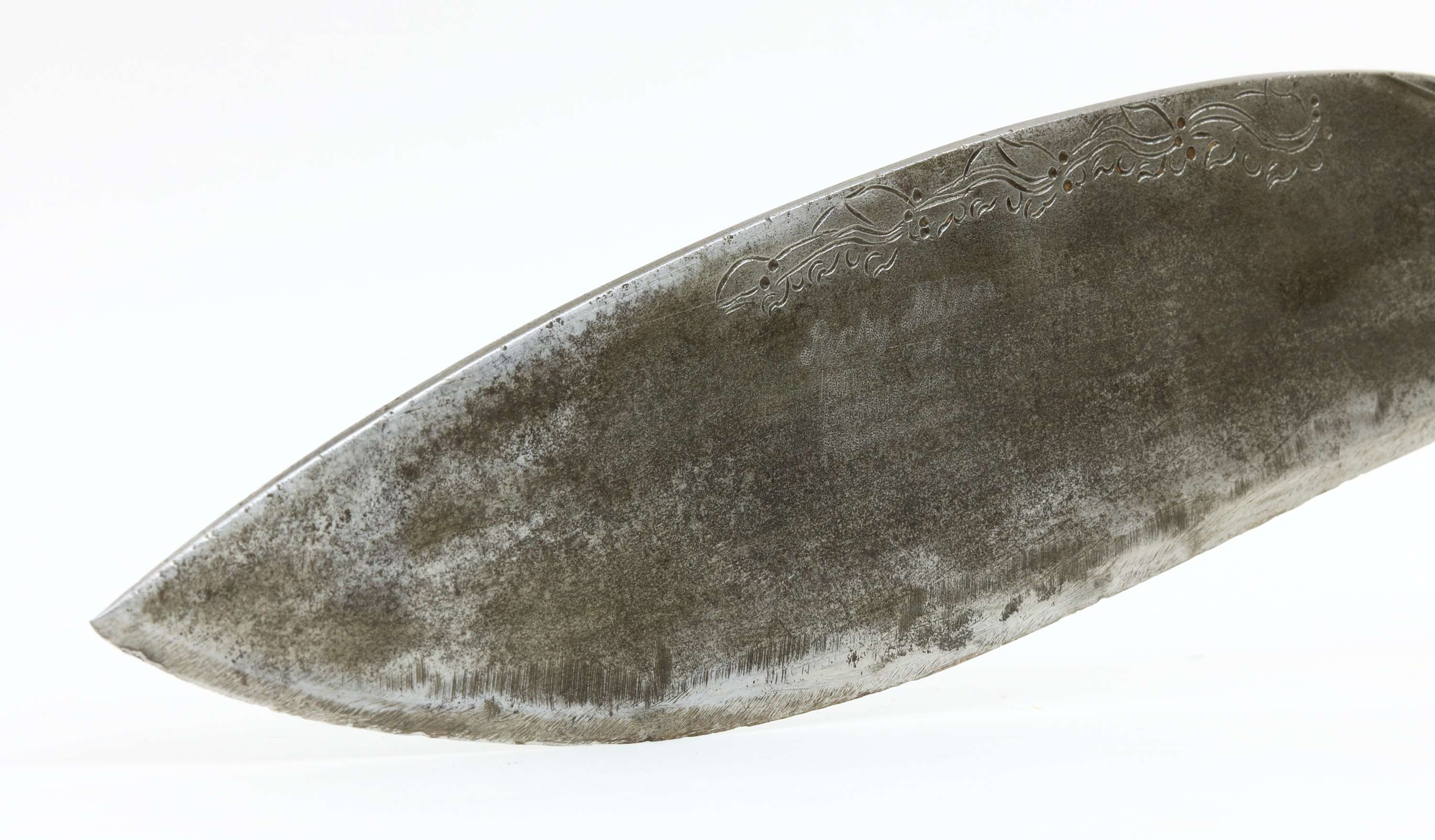