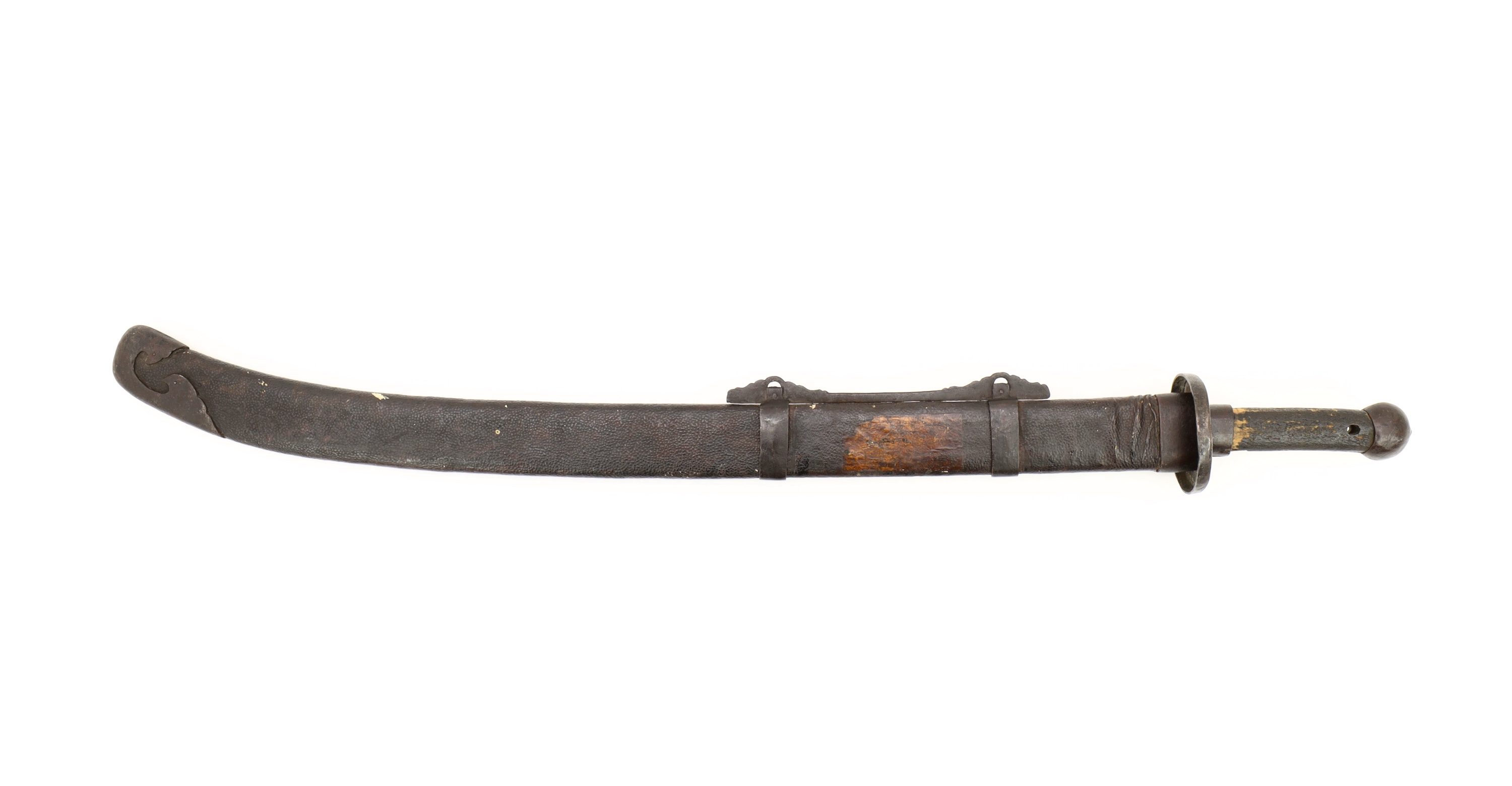 This type of saber is the last iteration of a series of regulation pattern Qing military liǔyèdāo (柳葉刀) sabers. Many of this exact type were taken back by foreign troops who had served in Beijing during the Boxer Uprising of 1900. I am not aware of any with earlier provenance, which leads to believe that production started not long before the Boxer Uprising, and due to the fall of the Qing in 1912 was discontinued not much later.

The Boxer Uprising was a civilian uprising against the foreign presence in China. Foreign powers forced cheap products into China, like machine-made fabrics, that took local producers out of business. This combined with general economic decline and famine made the people of Shandong rise up in anger. An angry horde nicknamed the Boxers, as many had martial arts backgrounds, made its way to Beijing where they started to attack foreign embassies.

Cixi, Empress of the Qing, didn't like the foreign presence either and sent the imperial army to back up the Boxers. In response, the foreign powers sent a 45.000 strong coalition force known as the Eight-Nation Alliance consisting of Russian, Japanese, British, French, American, German, Italian, and Austrian troops.

It resulted in a decisive victory of the much better equipped Eight-Nation Alliance who ended up raiding the imperial palace. Cixi barely escaped, but many of her Eight Banners forces perished. The sword described here was probably taken from one of them. 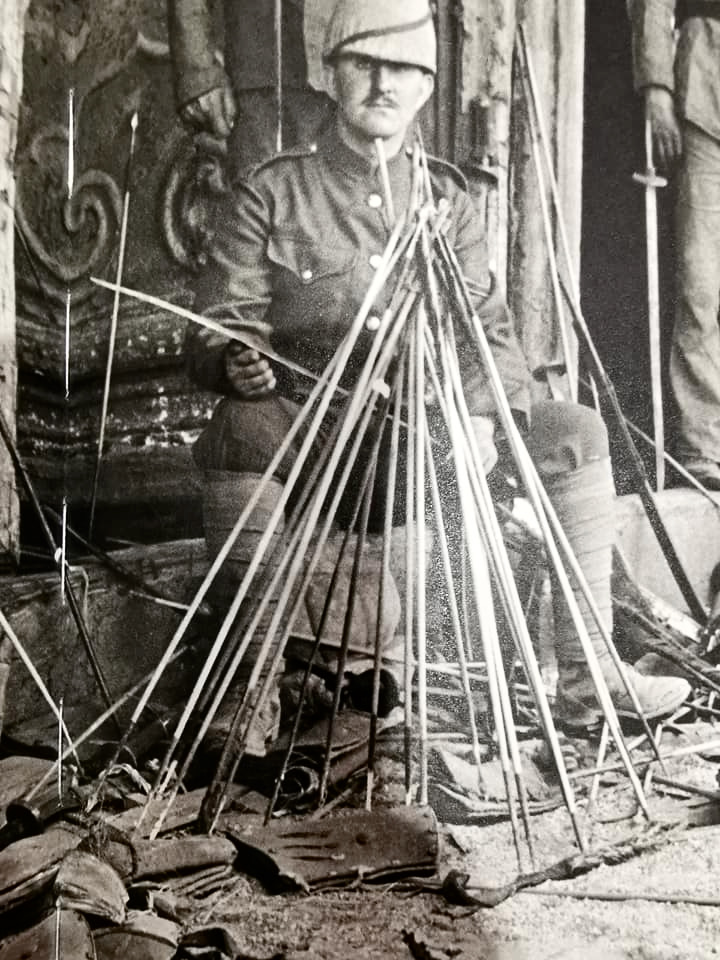 A soldier of the Eight-Nation Alliance,
posing in front of Manchu military equipment after the conclusion of the battle.
Among the items are arrows, a curiosity for the modern soldier at the time,
quivers, and some sabers like the one in this article.
Beijing, 1900. Unknown photographer.
National Archives, Washington.

Notes
For a very well-researched account of the Boxer Uprising, see: Joseph Esherick; Origins of the Boxer Uprising. University of California Press, 1987. He argues that the often-used "Boxer Rebellion" is a misnomer because it was backed by the Qing state and so is more accurately referred to as a rebellion.

A standard pattern Qing military saber, as issued to the imperial troops in Beijing in the years leading up to 1900. They are all quite similar with large, heavy blades with a single fuller. Metal mounts, blackened with a technique referred to as "fire lacquering" in regulation texts. The wooden scabbards of typical late Qing rounded style, covered with pebble-grained leather. Grip wraps, if they retain them, are also often black, but this example has lost its wrap.

Blade with some of the usual dings and patches staining but overall in very good shape for one of these. Blade edge is surprisingly blunt for its entire length. Some small edge damage, possibly from use.

These are very common sabers, I normally wouldn't buy any because they are not well made when compared to the much better Qing military sabers that were still in production around the mid 19th century. However, this particular one comes with a very interesting feature that made my heart pound faster; attached to the left side of the scabbard is a paper label in Manchu. 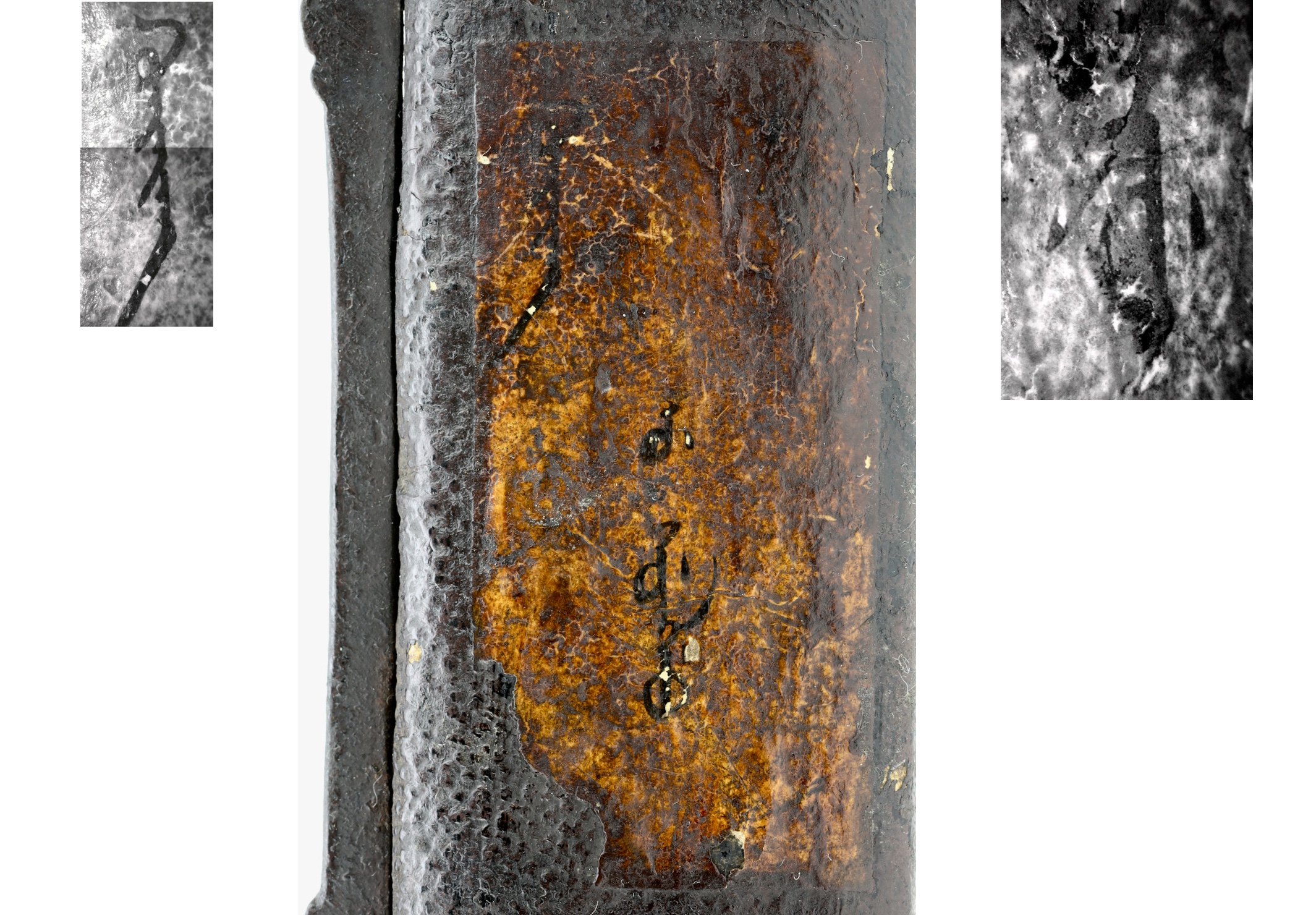 The paper label with the Manchu script.
Infrared examination revealed a hidden word in the upper right.
I added both upper words enhanced, to the left and right in black and white. 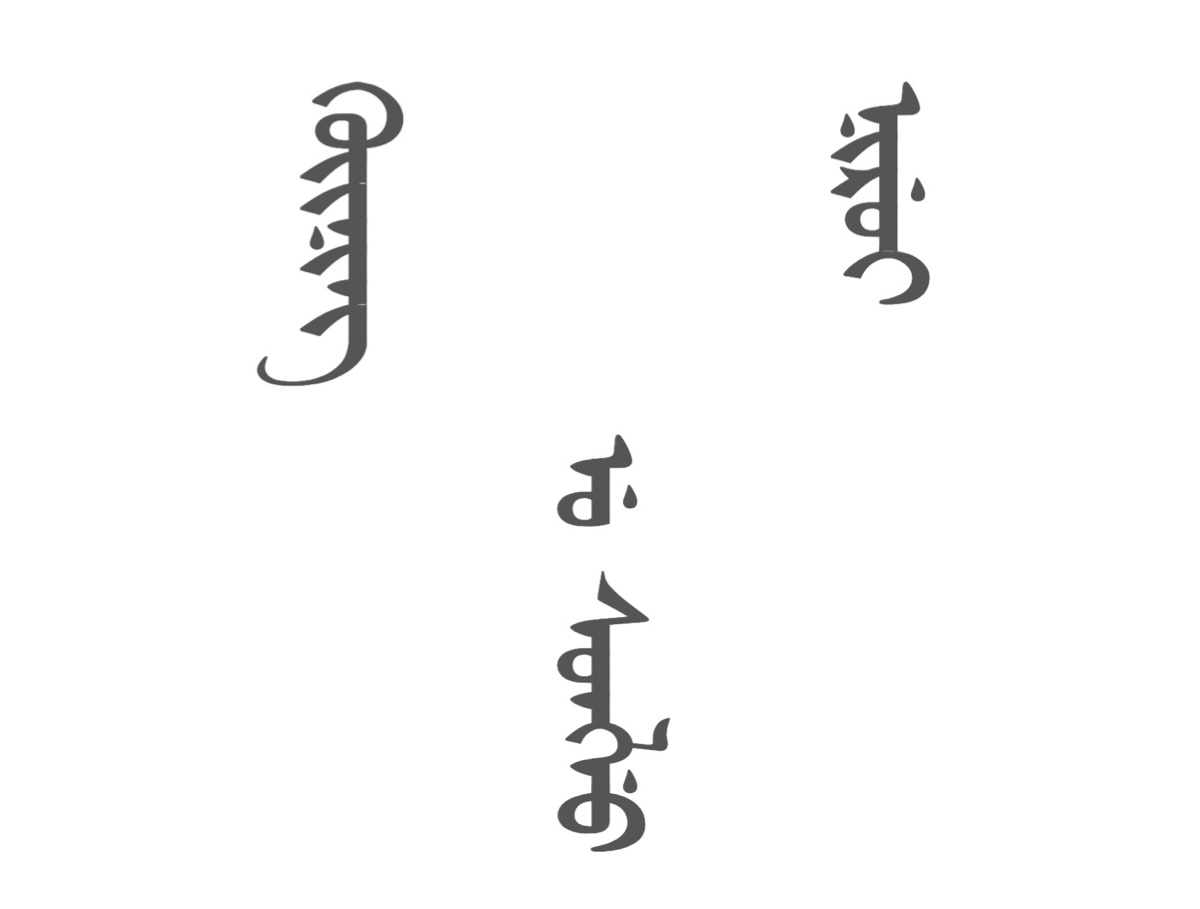 Kuining can alternatively be read as guining.1 It appears to be the name of the nirui.

A niru was a company of up to 300 men under one of the Eight Banners. It literally means "broadhead arrow", the name may have derived from the fact that commanders were bestowed special "command arrows", oversized arrows that were an emblem of rank and authority. A company commander, equivalent to "captain" of such a company was also called niru.2 On old labels on Qing military weapons, niru is often written as nirui, like is the case here.

The final word is the name of the owner, a Manchu by the name of Wu Songlu. Wú (吳) was a popular Sinified family name under Manchus, short for the clan name U Hala. A famous Manchu using the Wu surname was Wu Quanyou, originator of Wu style tàijíquán.

I believe almost all of these sabers that appear on the Western market were taken in Beijing in the summer of 1900 as war trophies by soldiers who served there. The vast majority of them are unmarked, giving no hints as to what kind of troops would have been issued them. Here we have rare evidence, in the form of a paper tag in Manchu, that they were also issued to the Manchu Eight Banner forces that guarded the imperial palace, now known as the Forbidden City. It was most likely taken in the assault on the Manchu Inner City, on August 15th.

I purchased the sword from an American individual, so it was most likely an American soldier who brought it back. The Americans were camped between the Dongbianmen and Guangqumen gates on the 14th of August and pushed Westwards from there the next day into the area of the city where the Plain Blue Banner was stationed.

The Manchu script is quite nicely done and an indication that the Manchu language was still very much alive in the summer of 1900 and that the complete sinicization of all Manchus, which is often thought to have happened during the course of the Qing, most likely happened in the decades after the fall of the Qing instead.

The saber also shows how poorly equipped unfortunate Wu Songlu was. Large, heavy, balanced like a crowbar. Inflation had hit the Manchu Bannermen quite hard and it shows in much of their later equipment. He was most likely also equipped with bow and arrows, or perhaps a matchlock musket while being expected to face an army with modern breech-loading weapons and early machine guns. Many Manchus fought bravely, but most of them never stood a real chance in these battles. Manchu arrows that date from this event are often covered in blood, not at the tip, but between the feathers. It's the blood of whoever wore them, splashing on the tails that stuck out of their quivers while meeting their ill fate.

In memory of Wu Songlu, and the many Qing soldiers who perished on August 15, 1900.


"I hate war as only a soldier who has lived it can, only as one who has seen its brutality, its futility, its stupidity." 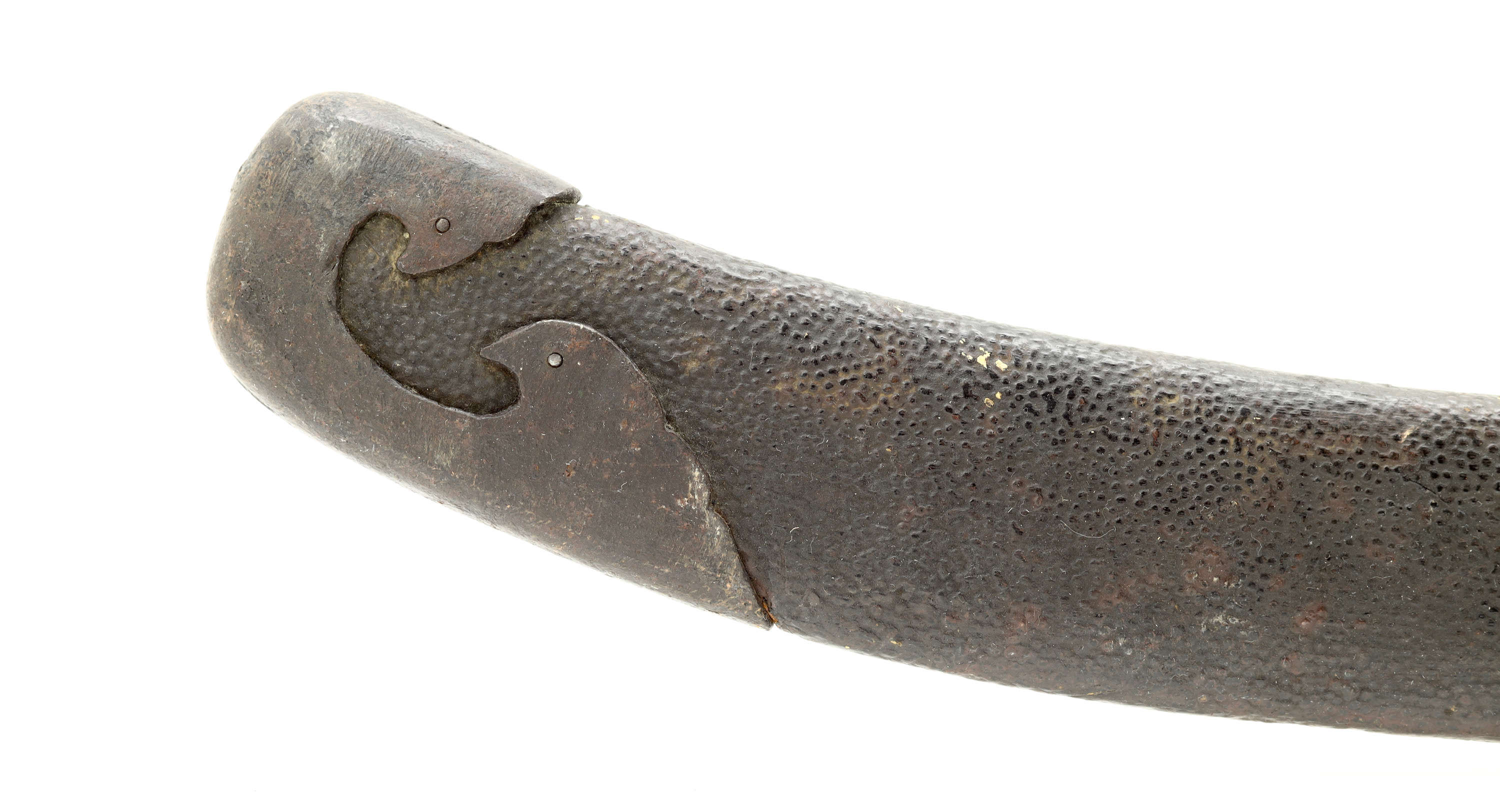