Made in Datong, Shanxi.

Following the defeat at the Boxer Uprising in 1900, the Chinese signed the Boxer Protocol, a treaty that allowed certain foreign troops, including Japanese, to remain in China. By 1937 however, the Japanese forces consisted of many times the number allowed by the treaty. A few years prior they had already taken Manchuria and established Manchukuo as a Japanese puppet state. Further tensions rose as Japanese forces started to surround Beijing and Tianjin.

In July of 1937, the Imperial Japanese Army was conducting military exercises near Wanping, a walled town southwest of Beijing. On July 7th they clashed with the Kuomingtang forces (中國國民黨 pinyin: Zhōngguó Guómíndǎng) at the Marco Polo Bridge. Colonel Ji Xingwen led the Chinese defenses with about 100 men of the 29th Route Army, famously holding ground with their dàdāo in hand until a truce was negotiated. This was the event that put the dàdāo on the map and made it an icon of Chinese resistance.

Later that month a detachment of about 800 troops of the Chinese 29th Route Army lead by general Song Zheyuan camped outside the walls of Tongzhou, the seat of the East Hopei Government, a Japanese puppet state that served as a buffer zone between Beijing and Manchukuo. Within the walls were the Japanese trained collaborationist Chinese troops of the 1st and 2nd Corps of the East Hopei Army, lead by Yin Ju-keng.

The Japanese pressed the Kuomingtang forces to disarm but they refused, and according to some sources about 500 of them were killed. The Japanese then ordered the East Hopei Army to press an attack on the remaining forces but they refused to do so, after which the Japanese bombed their barracks. This caused a mutiny against the Japanese garrison which lead to a decisive Chinese victory on 29 July 1937 and a massacre of almost all the Japanese within the garrison.

A typical early Republican period type dàdāo with classic wide blade that flares out towards a clipped tip. Two deep grooves are cut into the blade for improved handling, one stopping just short of the other, a feature also seen on many earlier Qing military sabers.

Hilt with the typical "ram's horn" quillons, one broken in action, and a large ring pommel. The grip is made of wood, wrapped with cotton cord, and then covered with a dark blue fabric that was stitched at the sides. This is also seen in old photos showing men of the 29th Route Army. 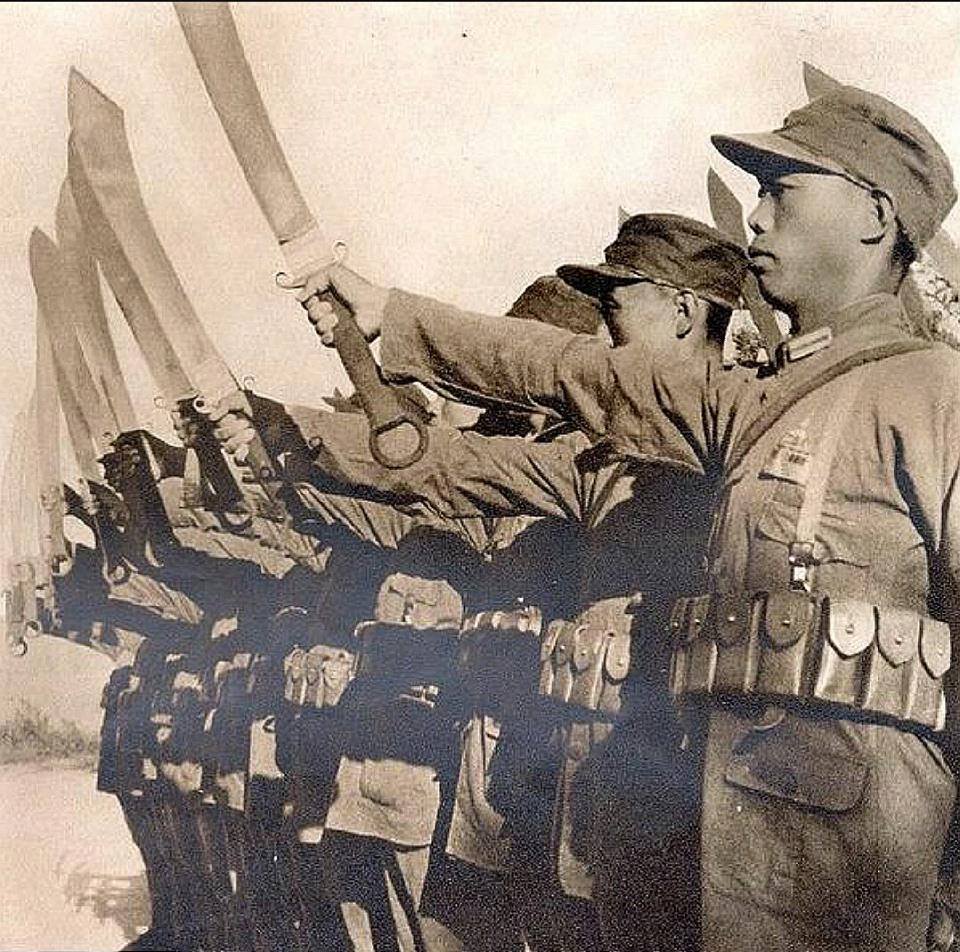 The blade is marked on the left side with the text, in Japanese: 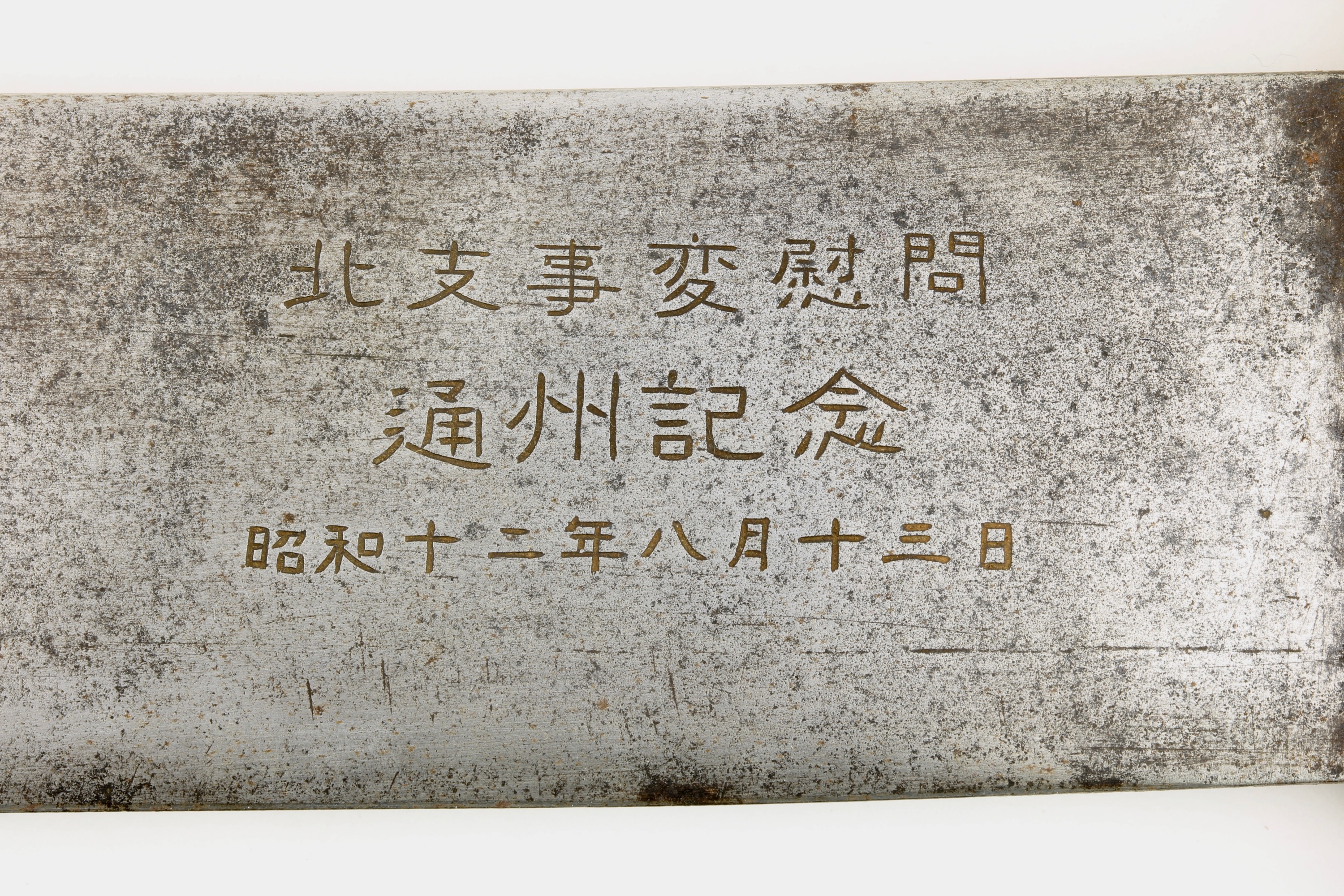 On the reverse is a single character: 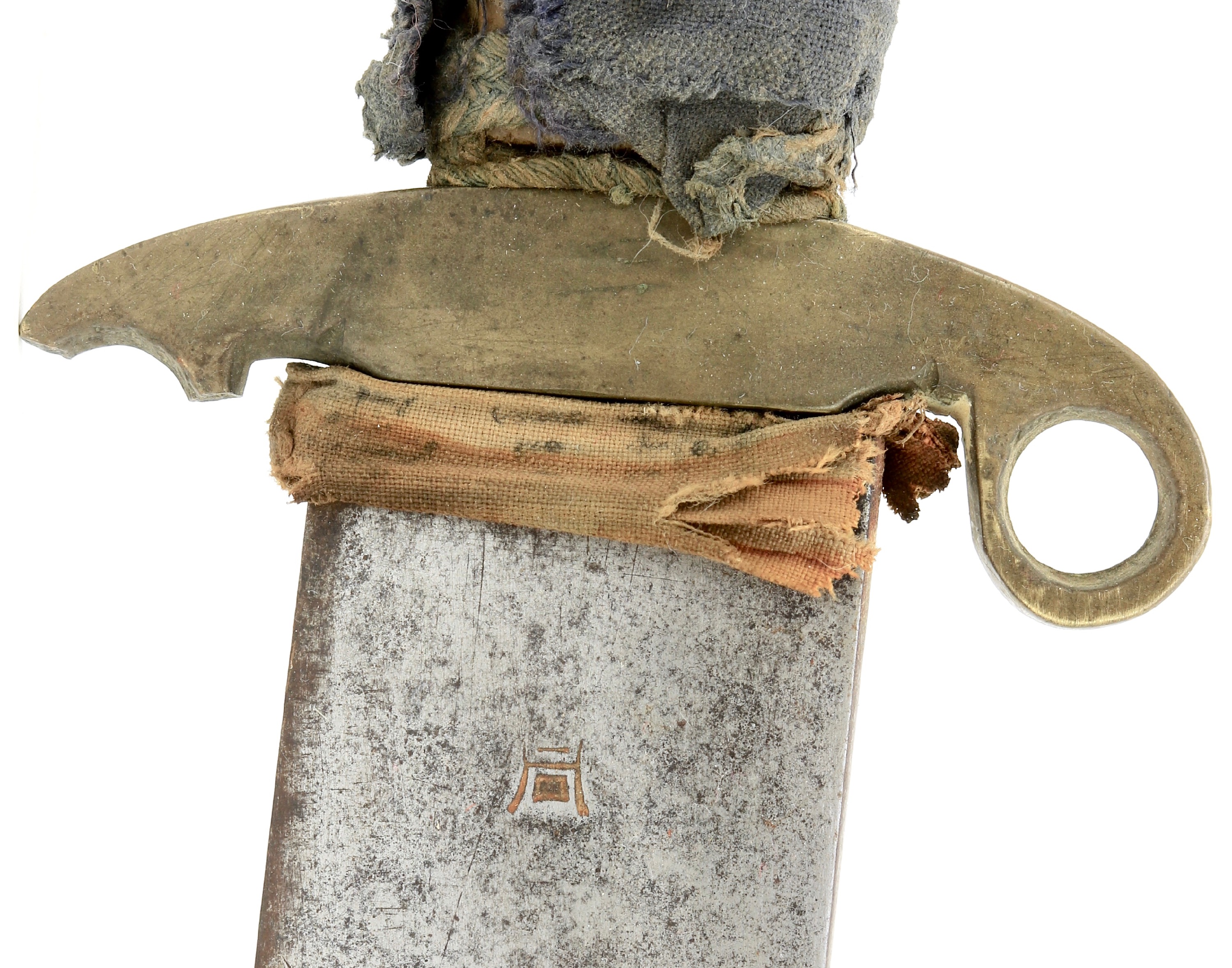 This probably refers to The Taiyuan Arms Factory (太原兵工廠) in Dàtóng (大同), Shanxi, one of the three largest in China. One of the first Chinese factories to adopt Western steam engines. In 1930 it had 3,800 pieces of machinery and 15,000 workers and technicians that produced a range of weapons from howitzers to machine guns to edged weapons.1

Around the base of the blade is wrapped an orange surrender tag. Such tags were attached to weapons that were surrendered by the Japanese to Allied forces after the capitulation in 1945. They are mostly seen on Japanese swords that were brought back to the United States by American soldiers. This dàdāo came to the USA in the same way, along with some Japanese swords.

The tag is fragile and its writings somewhat faded. I did not attempt to open it, but it should have the name of the Japanese soldier who surrendered it and possibly also a location or address. 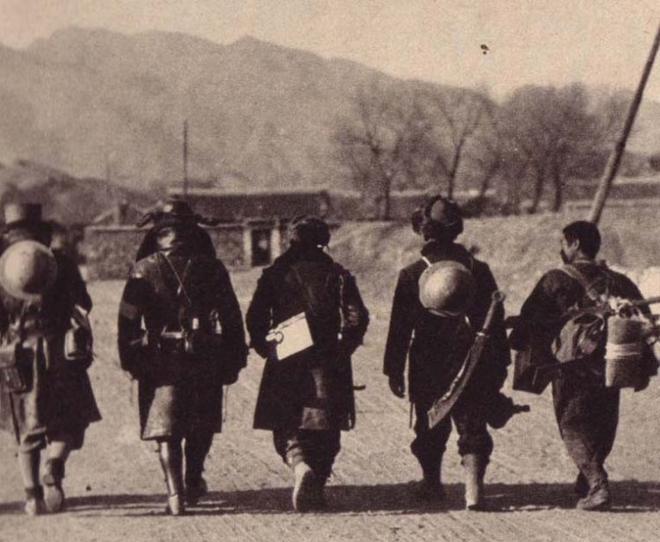 A group of Japanese soldiers. One carrying a trophy dàdāo.
Unknown photograpger. Circa 1932.

The August 13 date, two weeks after the Tongzhou incident of July 29, suggests it was taken when Japanese troops regained access to the area of the conflict at the end of the Battle of Beiping-Tianjin. The inscription hints at an event where the deaths were mourned. (Among the casualties were Japanese civilians as well.)

The surrender tag indicated that it was handed over to US troops by a Japanese soldier in 1945. Perhaps the same who had taken it in the first place.

The East Hopei Army was Japanese trained and equipped, and so it is less likely that this sword belonged to them. It was, however, the iconic side-arm of the 29th Route Army who initiated the event by being unwilling to stand down. About 500 of them are believed to have perished at the scene, and the sword was probably taken from one of their fallen soldiers.

Our dàdāo misses its scabbard but does carry markings that attribute it to a specific time, place, and event, and it still retains its Japanese surrender tag.

The blade still sharp, but with some dings in the edge from contact. Patches of corrosion here and there. Part of the guard snapped off, probably in action. Some fraying to the guard-side of the wrap. The surrender tag is fragile and somewhat faded.

An important Chinese dàdāo with markings that attribute it to the Tonzhou incident, a Chinese attack on a Japanese garrison during the Battle of Beiping-Tianjin. It was part of a number of incidents that are seen as the start of the Second World War in Asia.

It was most likely used by a soldier of the 29th Route Army, the troops that made the dàdāo famous just days before at the Marco Polo Bridge Incident, and probably left at the scene of the Tonzhou incident until Japanese forces regained control of the area.

This sword has come full circle; Taken as a trophy by a Japanese soldier in China, then as a trophy for a US GI in occupied Japan, found its way to the US, and now with the descendant of a Tianjin resident who lived there during the invasion who consigned it to me.

The owner wishes his proceeds, minus my commission, to be donated to charity.

"May it rest in peace and witness only harmony from now on." 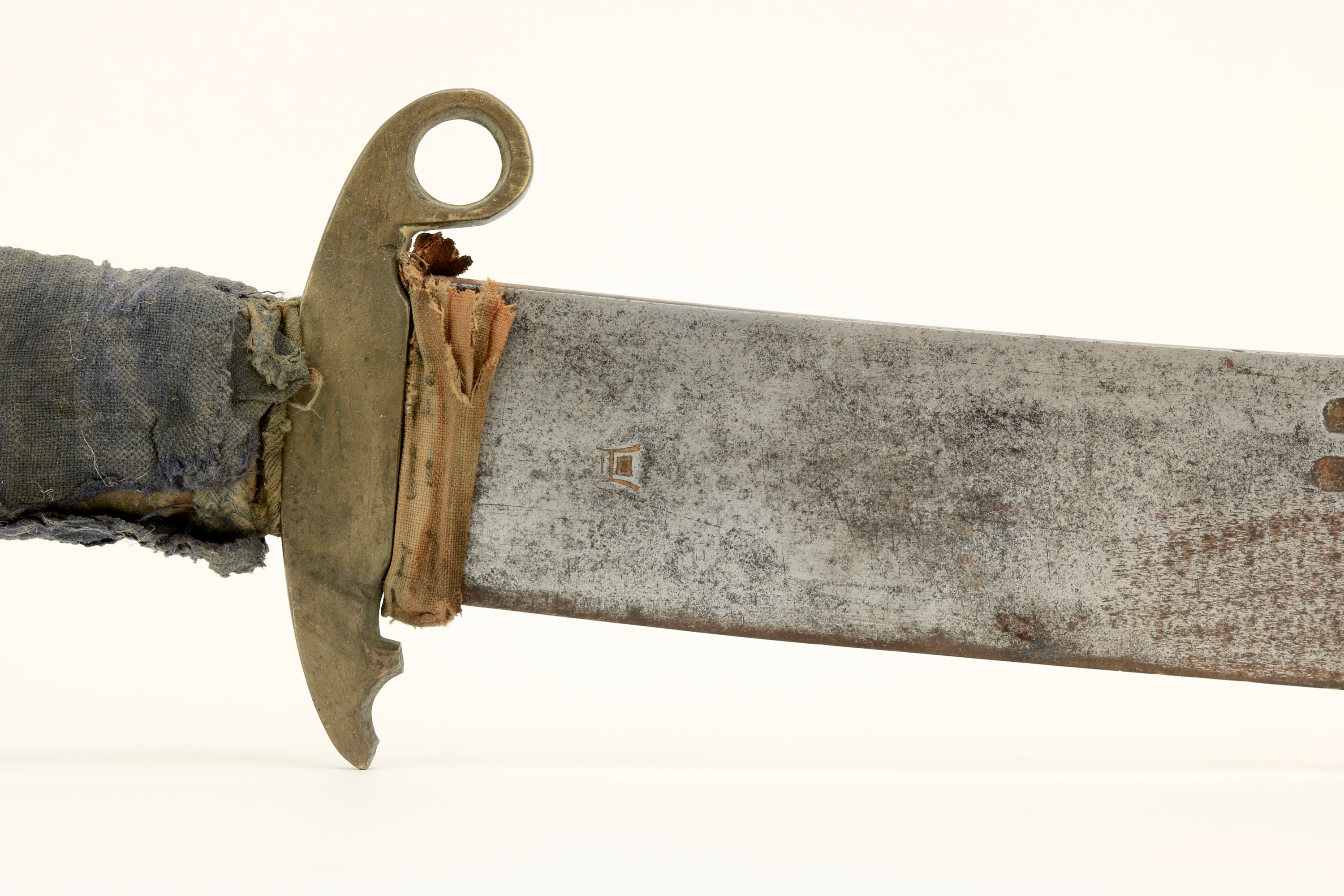 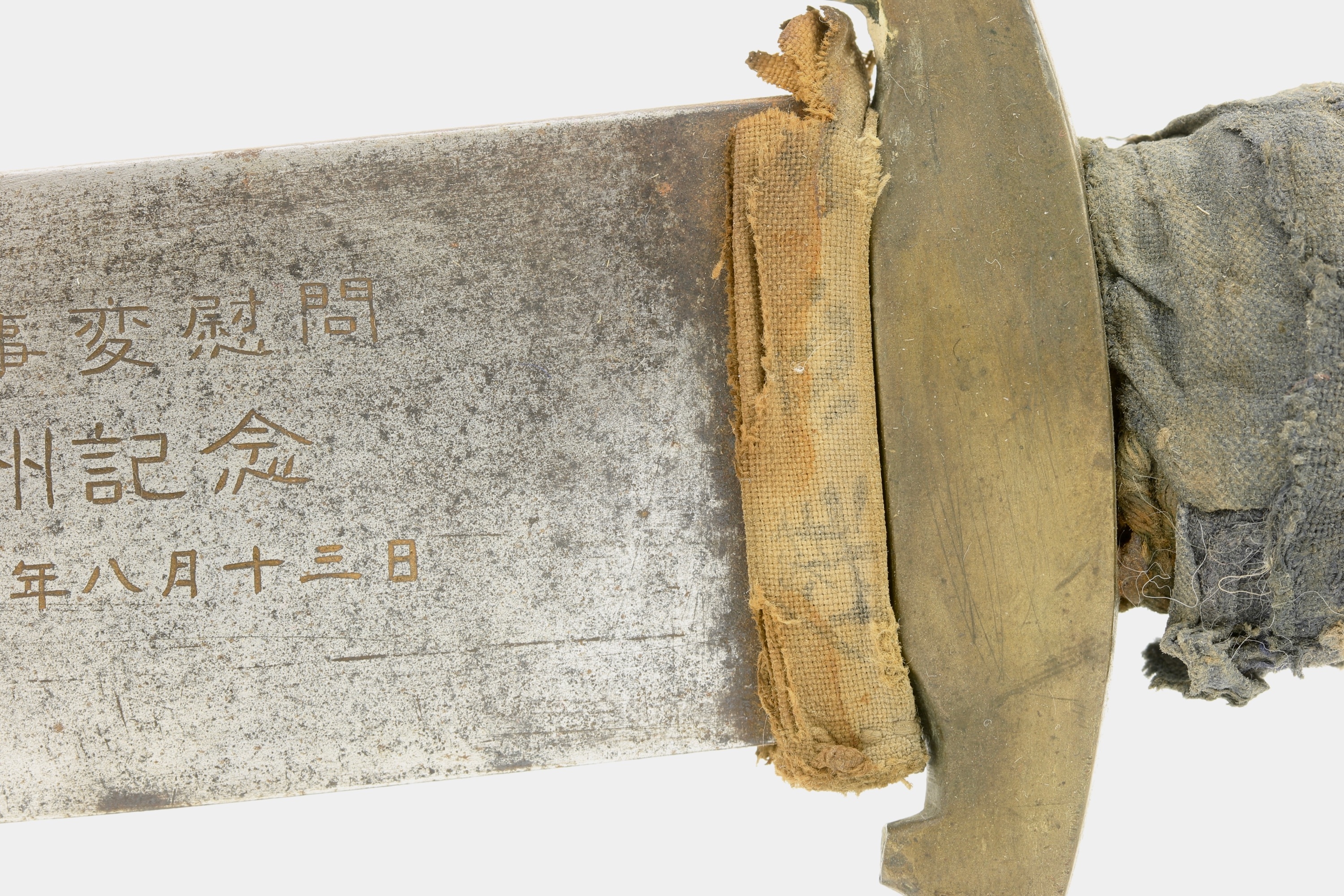 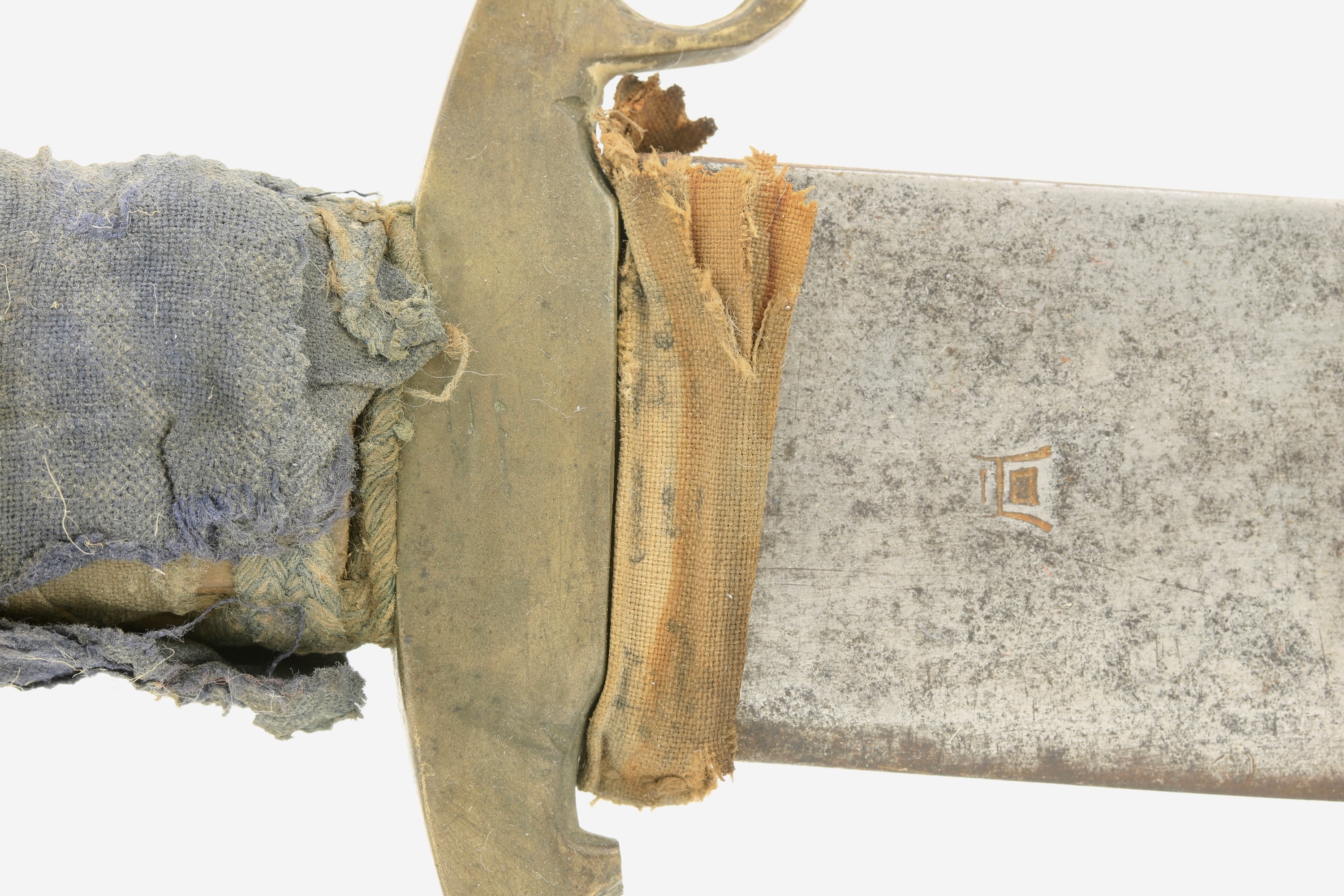 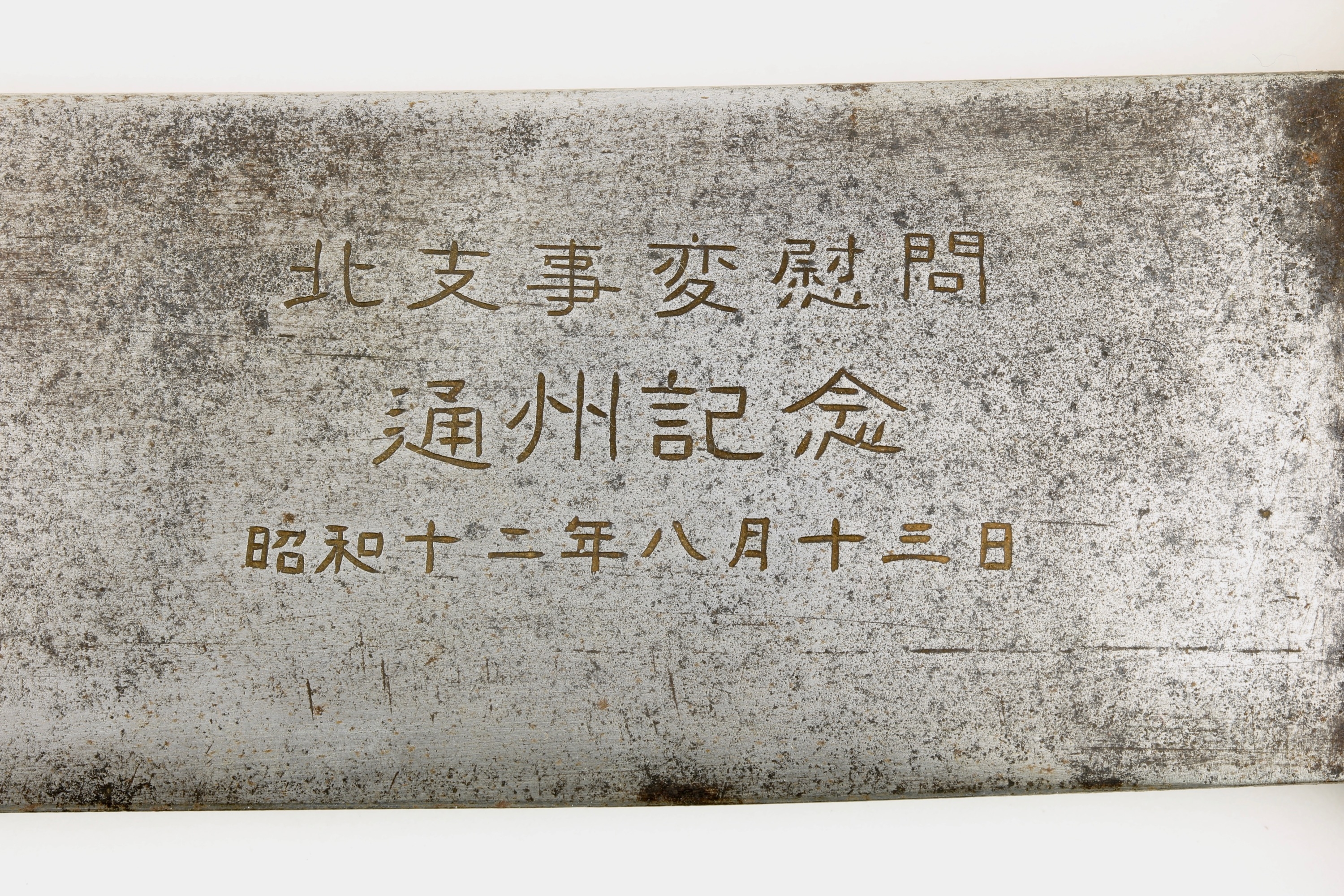 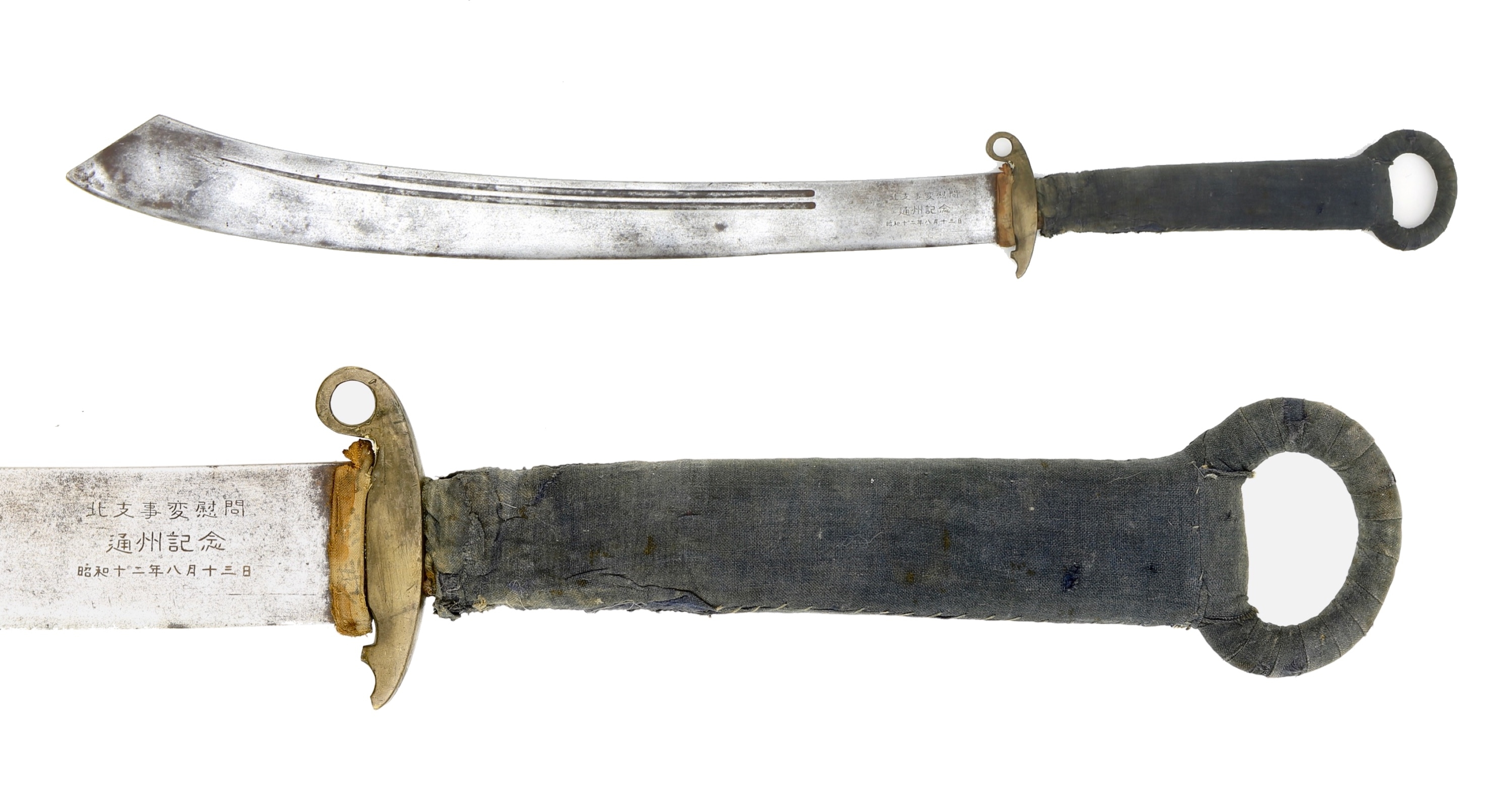