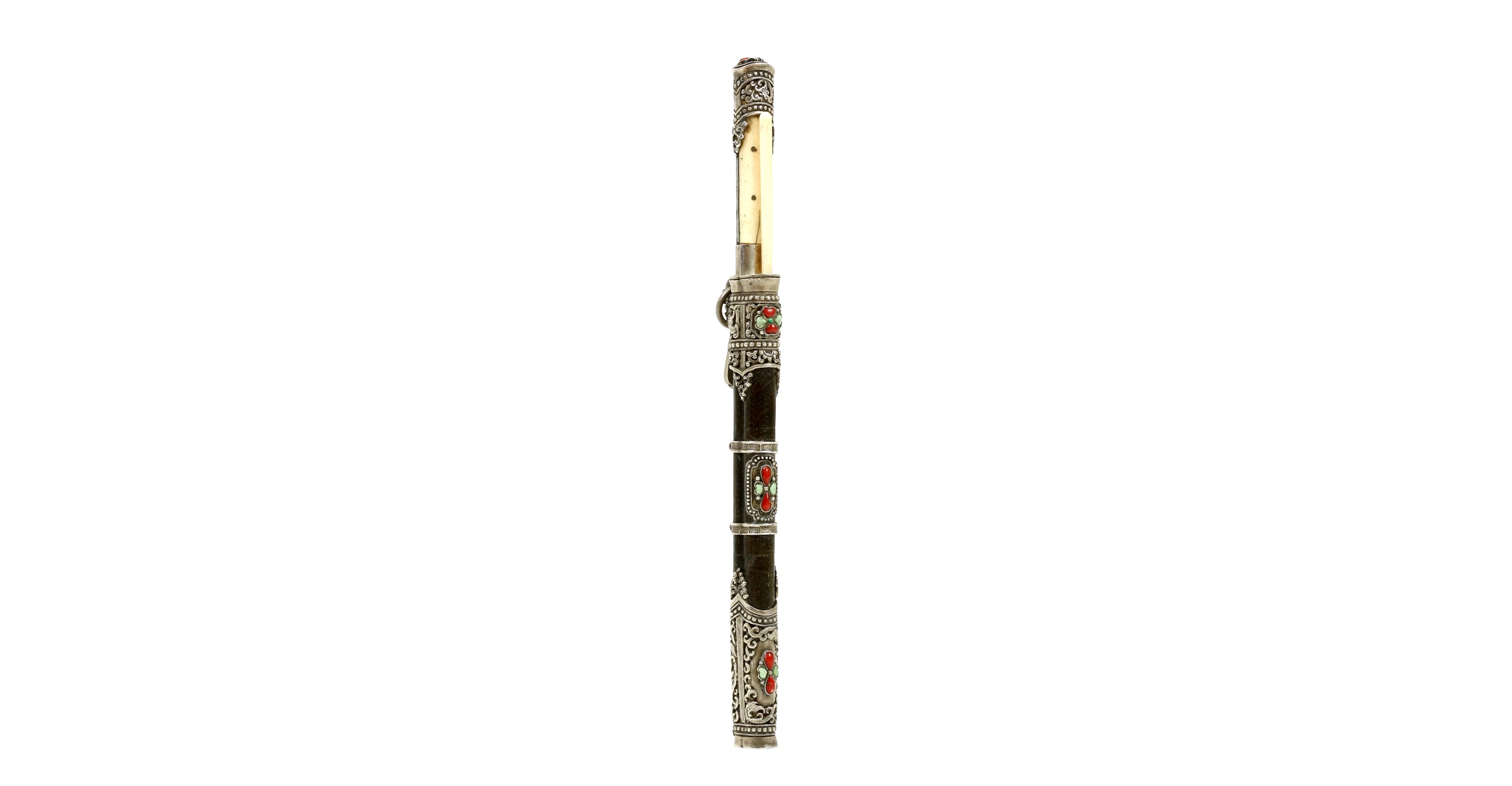 Sets of knife and chopsticks were customarily worn by Manchus and Mongols. Their traditional eating habits included cutting the meat from the bone themselves, and eating it with the chopsticks, whereas in the Chinese way of eating the meat would come pre-cooked and there was no need for a knife at the table.

In the 18th century, the Qianlong emperor was worried about a rapid decline of Manchu and Mongol customs, and as a result feared his men would become too cultured, and less martial. Among the many things he did to promote the old customs, he issued an edict making it illegal for the Manchus and Mongols to have their meat cut for them. As a consequence, all had to carry a knife with them all the time.

A fine specimen. The blade is forge-folded with an inserted high-carbon edge, between layers of tough steel forged with a wood grain pattern. It has a wide groove on the right side, and a flat surface on the left to show off the forging pattern.

The hilt consists of two bone grip scales, a solid silver bolster and a large pommel made of thick, pierced and chiseled silver with designs of archaic kui dragons. Four stones are set in the pommel, two corals and two turquoises, shaped like a stylized flower.

The scabbard is made of wood with a dark veneer that appears to be wither fine-grained bark or dark wood. It is mounted with thick, heavy silver mounts in the style of the pommel, with coiling kui dragons and each mount beset with corals and turquoises.

In addition, a silver band runs along the back, engraved with a "rolling thunder" pattern that resembled the Greek key pattern of Western art. Two additional bands, in the same style, go around the mid-section of the scabbard.

It survived with a single chopstick, which is made of ivory. For buyers outside of the EU, the item is offered without the chopstick.1

The workmanship on this piece is rather Chinese, as are the proportions of the knife itself. The style of the decoration, made of thick, pierced silver that somewhat resembles Tibetan ironwork, follows Mongolian taste. It was probably made by a Chinese craftsman, in the Mongolian taste to cater to a wealthy Mongolian.

A report by Dr. Edward Bedloe, Consul of Amoy, explains the market for such luxury goods even as far down south as Amoy, present day Xiamen, in 1892:

"Few collectors in the United States are aware of the wealth of China in all sorts of oddities and curios. There is an army of connoisseurs among the rich Mongolians, but they display little or no energy is accumulating art treasures. If they see something that strikes their fancy and they are satisfied with the price, they take it without a murmur. If it be 10 cents beyond what they regard as a fair limit, they walk off in high dudgeon.

As a consequence, the curio market has few ups and downs. Nevertheless, it does an immense business the year through. The best patrons are naturally wealthy natives. Then come some European collectors and experts. Ship captains and missionaries are also buyers of considerable importance. Last and least are the collectors of the United States." 2

A very nicely made Chinese trousse set that was made with a wealthy Mongolian in mind. It is of fine quality with substantial silver mounts, pierced, chased, chiseled and engraved to finer detail.

Notes
1. I cannot ship the ivory chopstick outside of the EU without a CITES permit, which unfortunately is almost impossible to get from the Netherlands CITES branche. As such I will only offer it without the chopstick outside of the EU. I have a restorer who can reproduce the chopstick in bone, and re-create the lost one as well.
2. Dr. Edward Bedloe; Chinese curios, Consular Reports on Commerce, Manufacturing, Etc. No. 147. December 1892. US Congress: Washington DC. 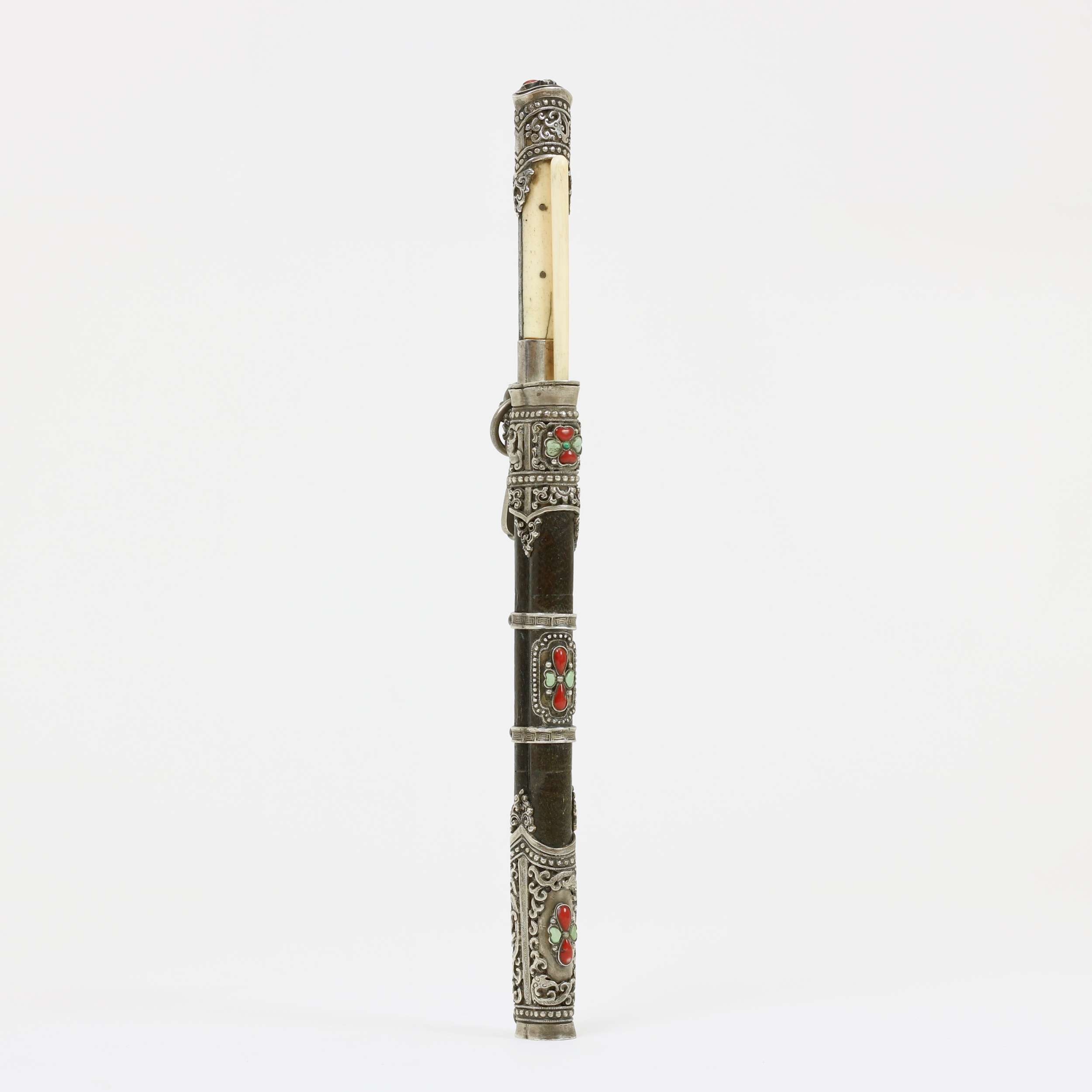