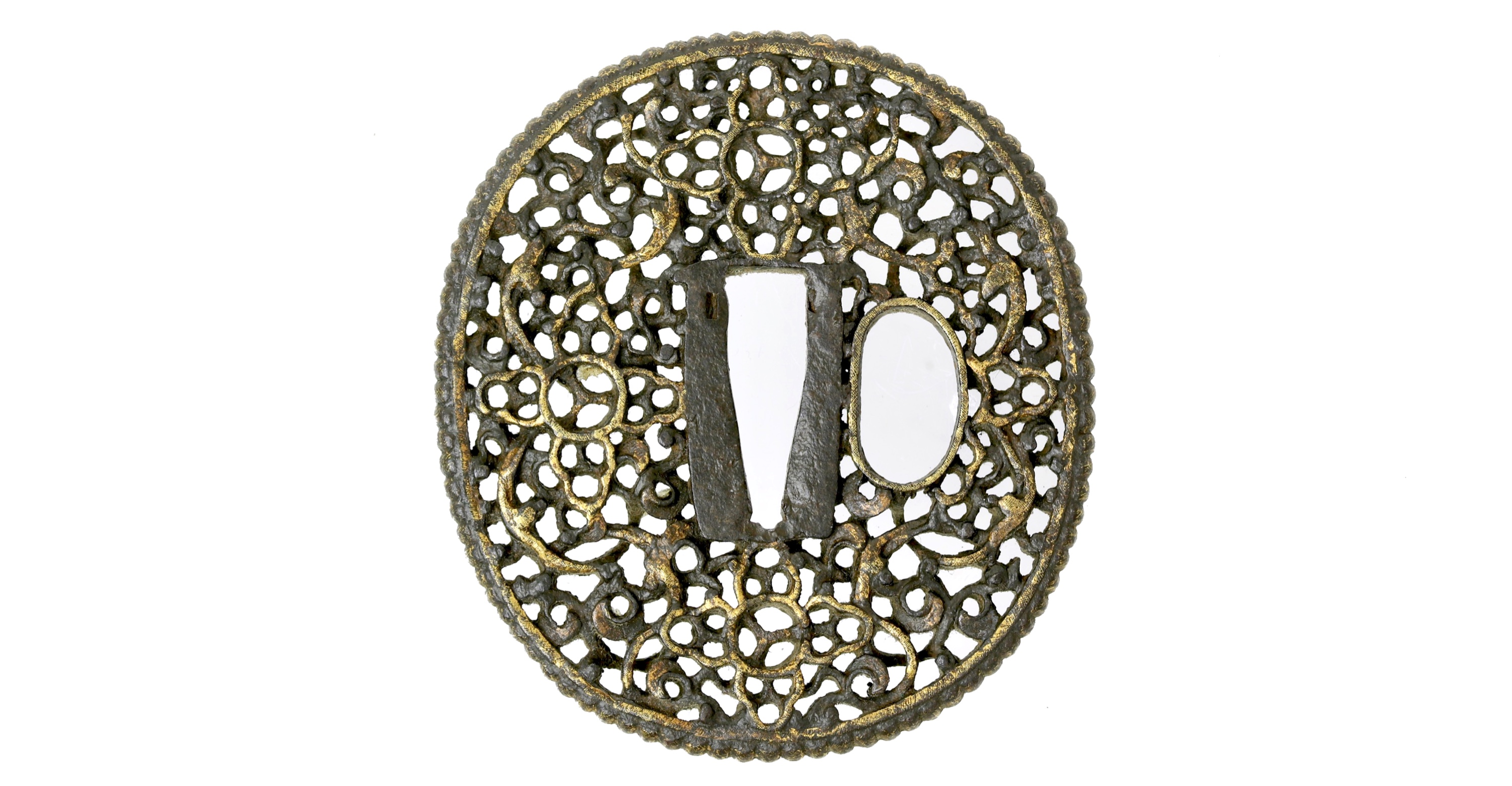 Earlier part of the Qianlong period

Japanese sword guards that exhibit any kind of foreign influence are today commonly called nanban tsuba by collectors and connoisseurs who are mostly unaware of the fact that some of these are not just foreign-influenced, but actually altogether foreign. Here is such an example.

Made from a forged plate of iron that was pierced, filed and chiseled to a complex network of tendrils, some overlapping and undercut, all framed within a ribbed rim. Such openwork is called lòukōng (鏤空) in Chinese.

Among the tendrils are four raised outlines in shapes that resemble the outline of a double vajra. These probably once served as bezels for (semi-)precious stones like lapis lazuli, turquoise, and / or corals. 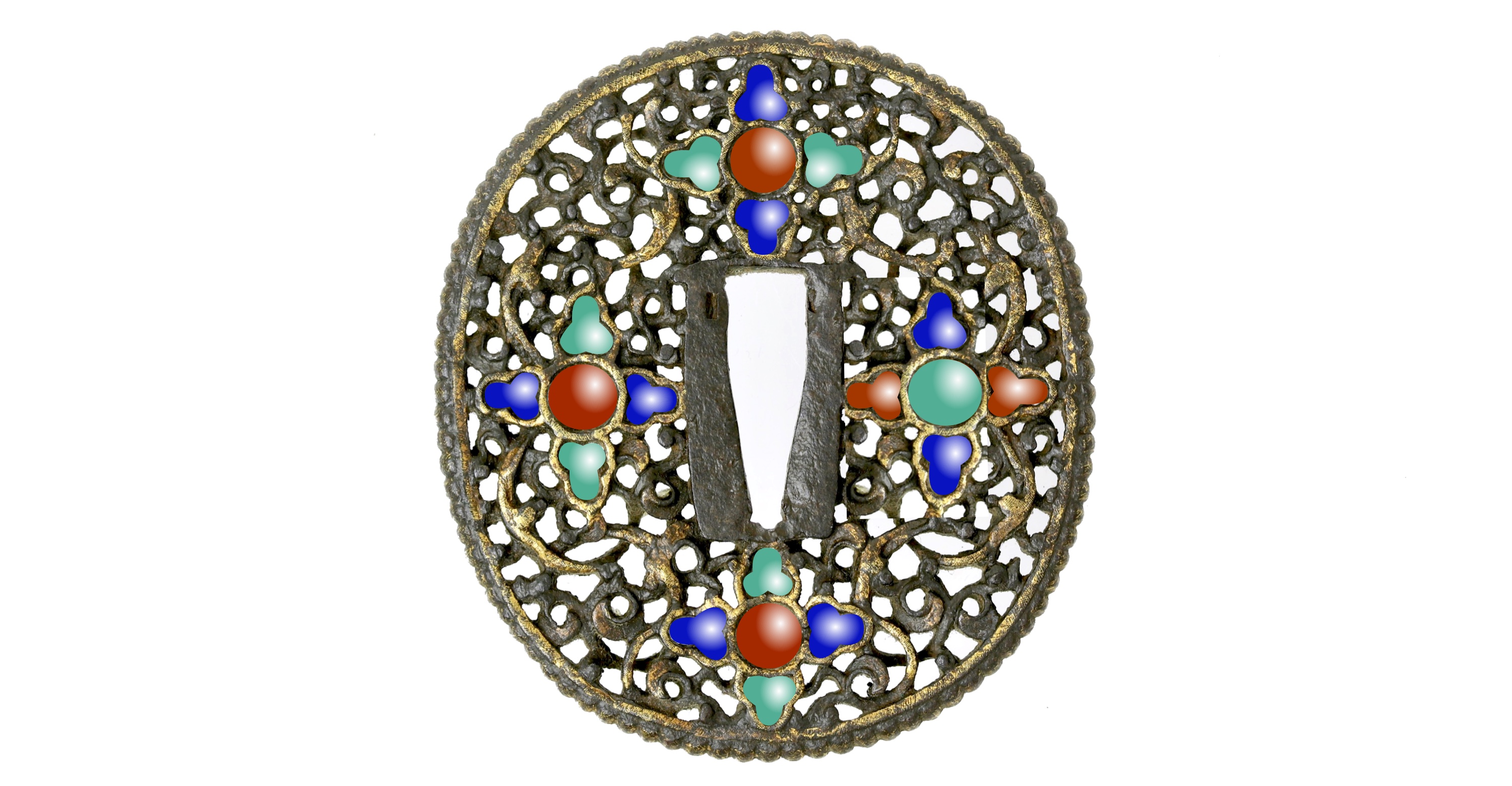 The guard as it may have looked like with the stones and corals still present.
I based the color scheme on similar stones on a helmet in the Royal Armories in Leeds.
Accession number XXXVIA.257. (Not currently digitized.)

The tang opening is surrounded by a trapezoid plate, in the shape of the ferrule for the typical angular style Qing hilt mountings. One side is flat, that went against the ferrule and sword grip, while the other is ribbed, which was exposed on the blade side.

An opening was cut on one side, called the kozuka-hitsu-ana. It was meant to accomodate the hilt of a small utility knife often carried in Japanese sword scabbards along with the sword itself.

It is lined with a thin band of iron, the sides covered with gold overlay over fine crosshatching, much like the golden decor on the rest of the piece.

Another purely Japanese addition are the tagane ato (鏨跡), literally "punch marks" done near the tang opening. This kind of punching is meant to expand the metal to order to ensure a tight fit of the guard against the sword tang.

The work is finer and denser than the bolder openwork that was common in the 17th century, and the rim is ribbed, a simplification from the earlier beaded borders. These elements point towards the first half of the 18th century.

Pierced iron mounts that held (semi-)precious stones and corals were not just for anybody. In fact, they were reserved only for a number of noble ranks of the early Qing. The 1766 Huangchao liqi tushi (皇朝禮器圖式) for example stipulates that:

Only the "Eastern Pearl" was forbidden for them, these were large Manchurian freshwater pearls that were only for imperial use.

Fine metalwork from China rarely survives in any condition, and and it's a blessing that this one was preserved and treasured by a series of Japanese owners, probably going back into the 18th century. 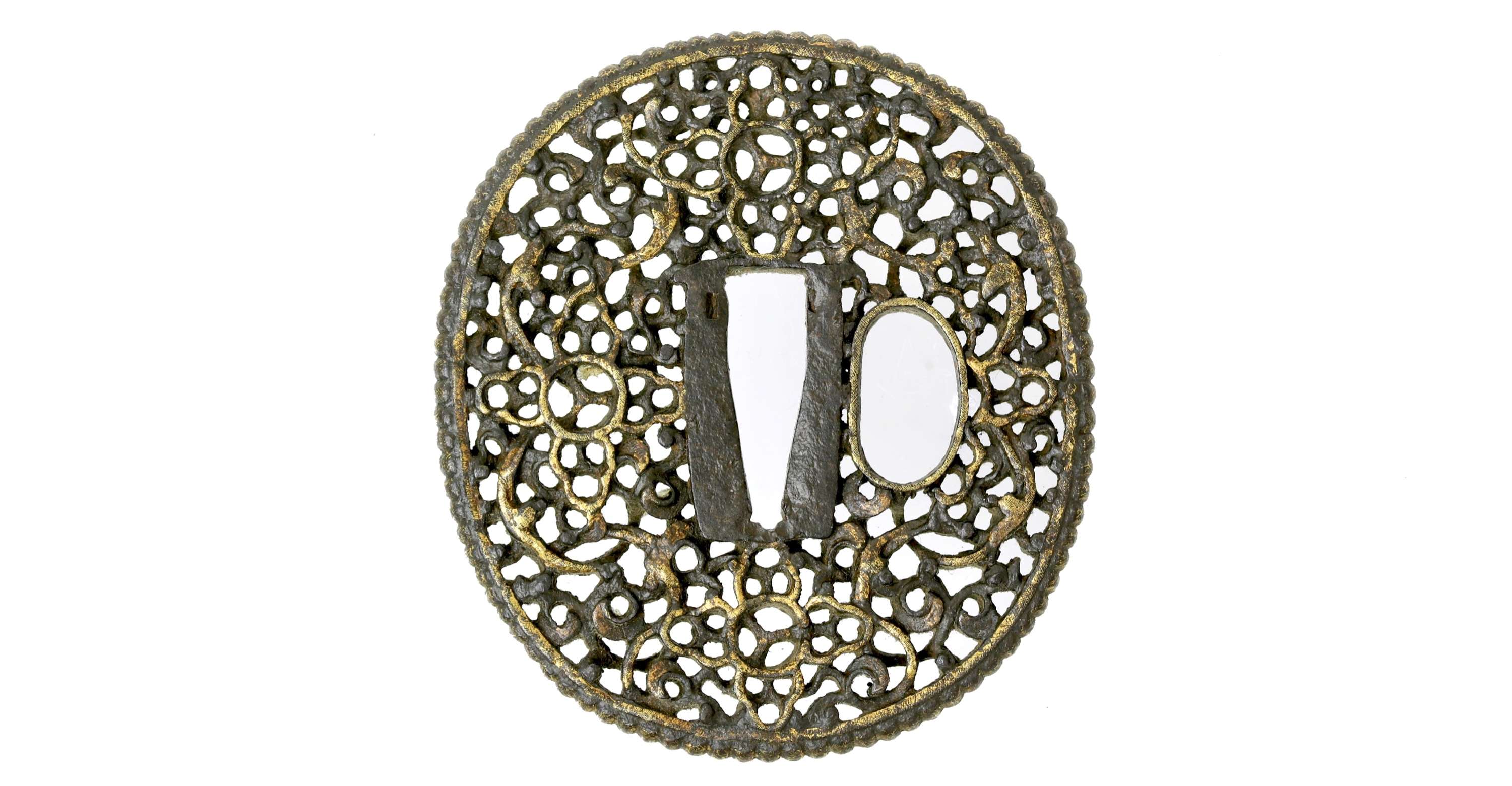 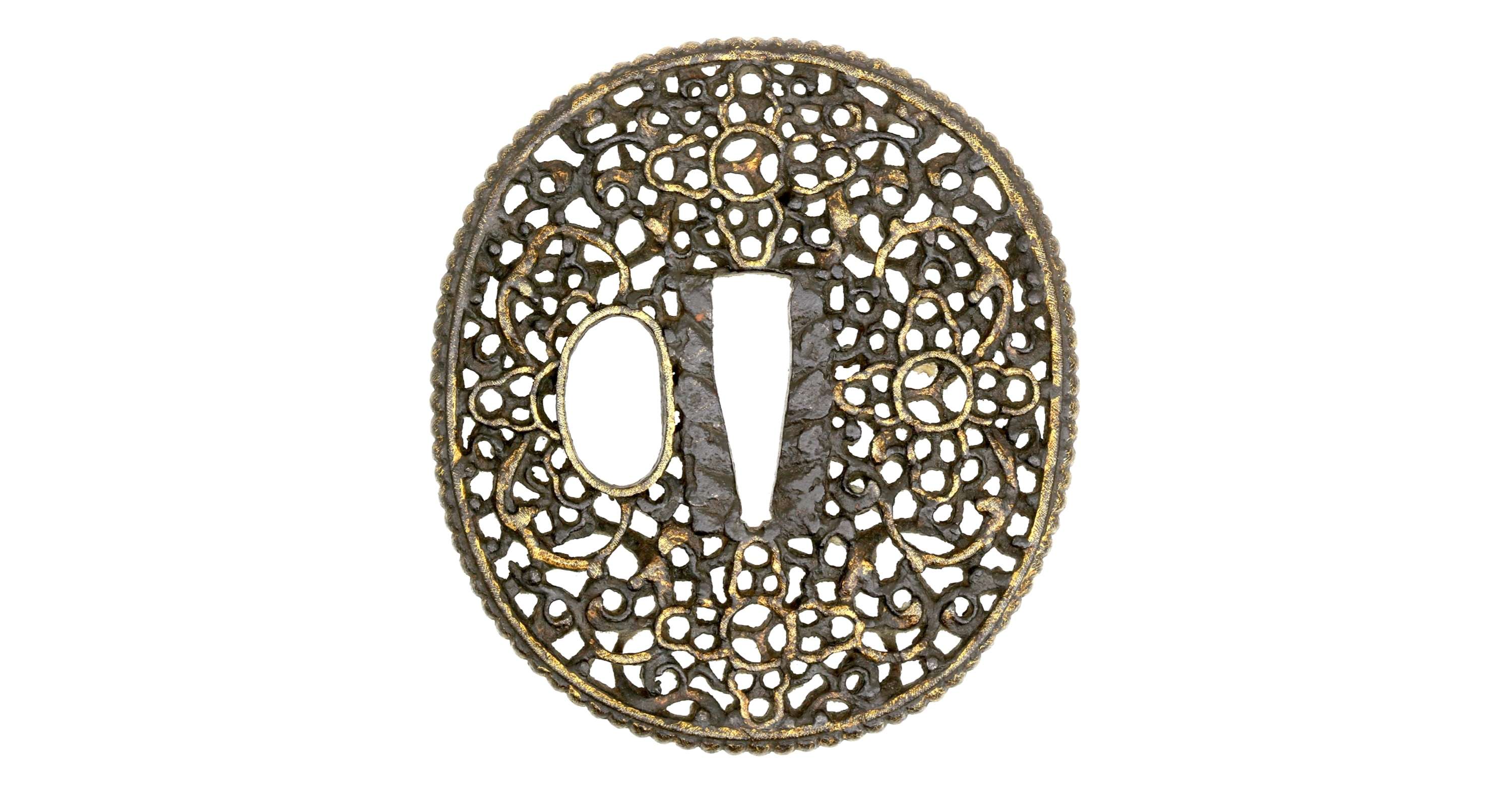 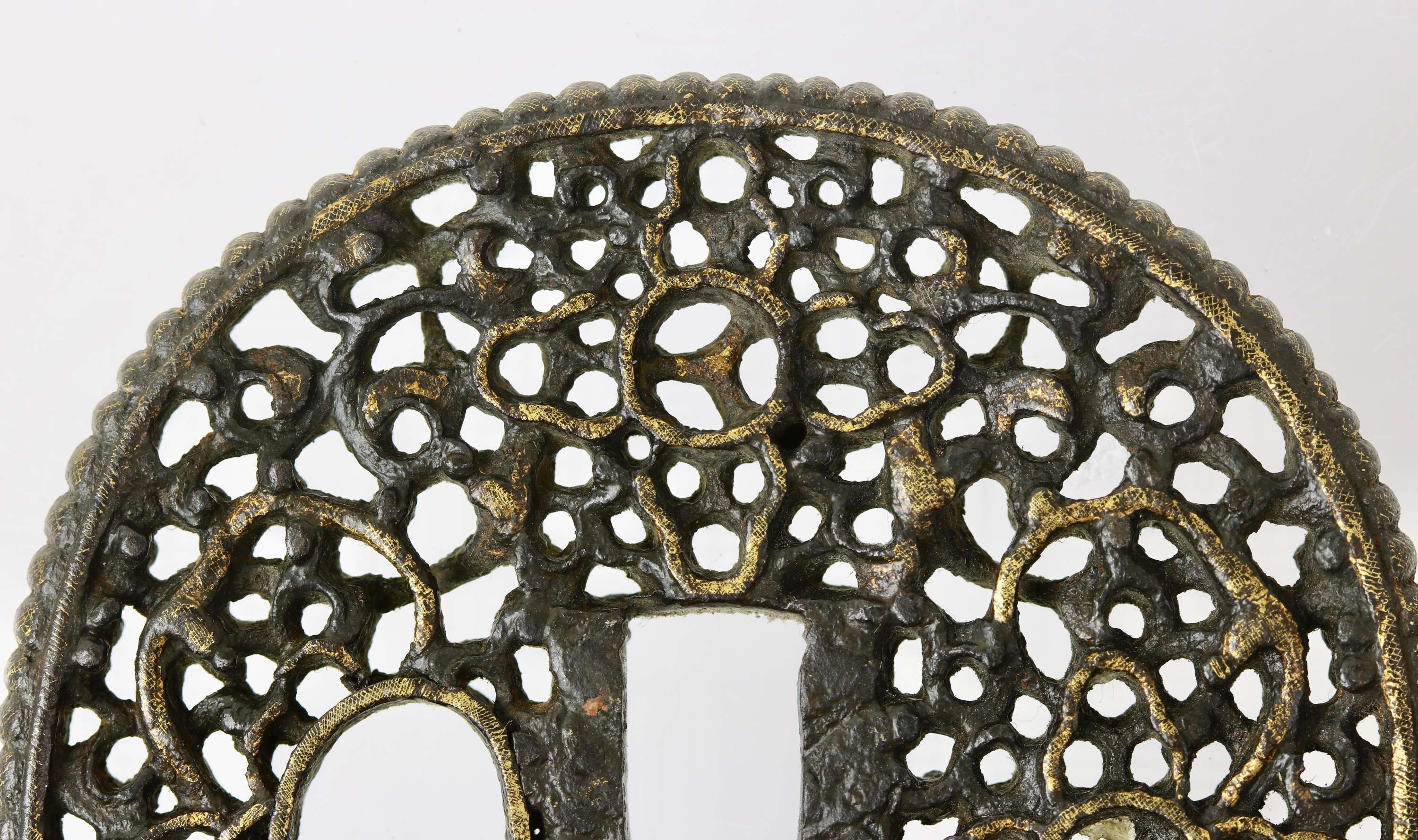 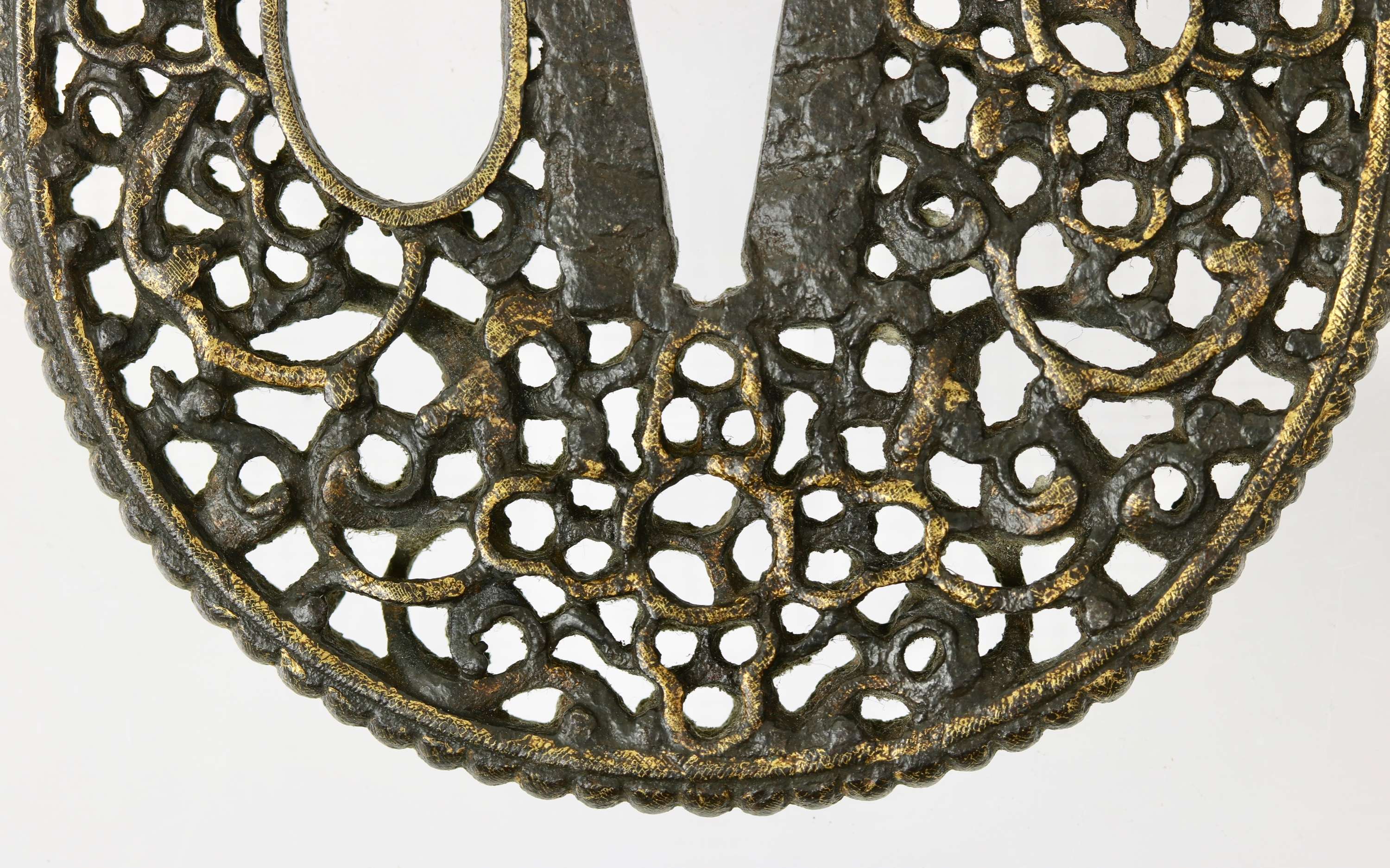 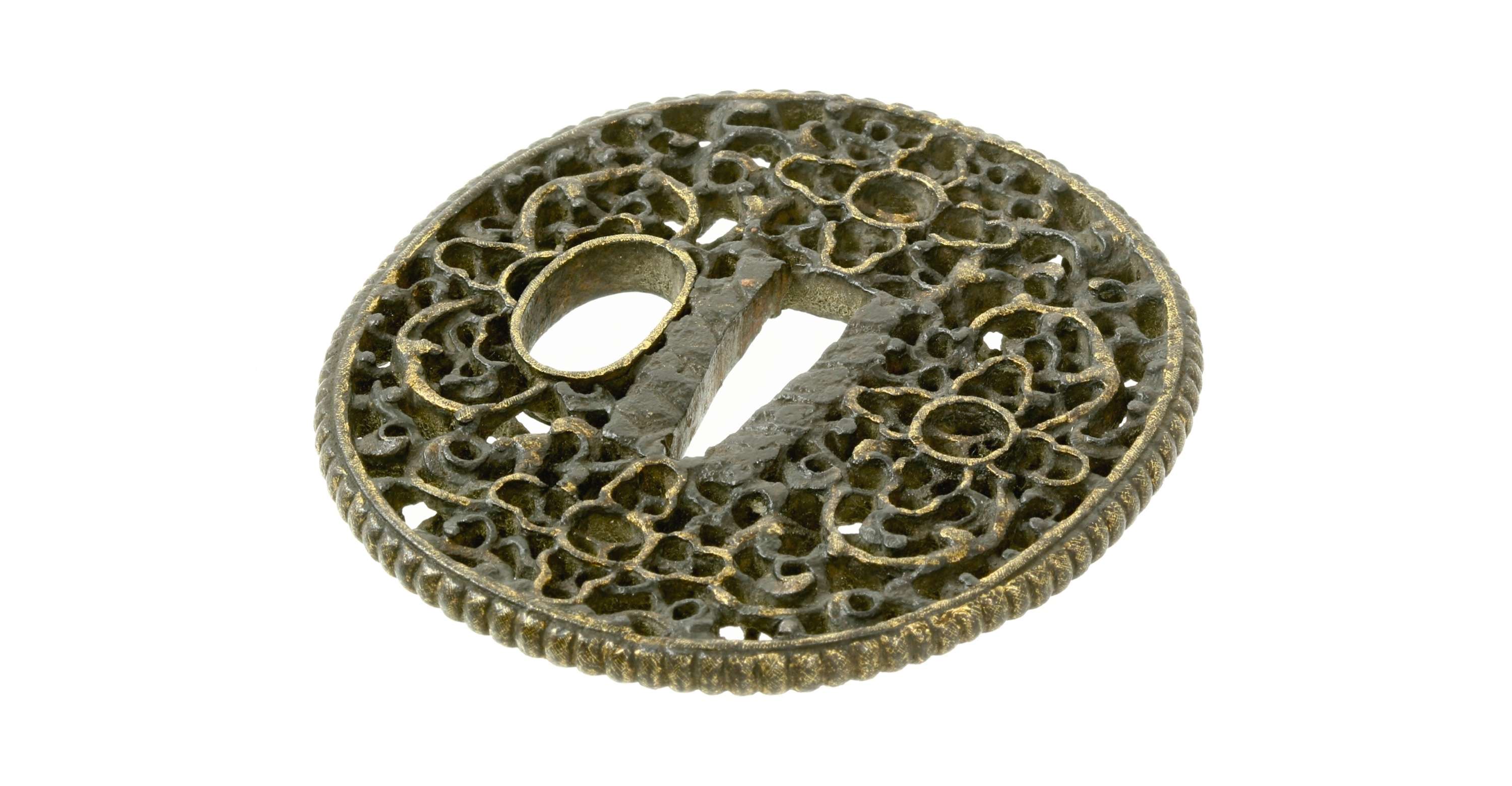