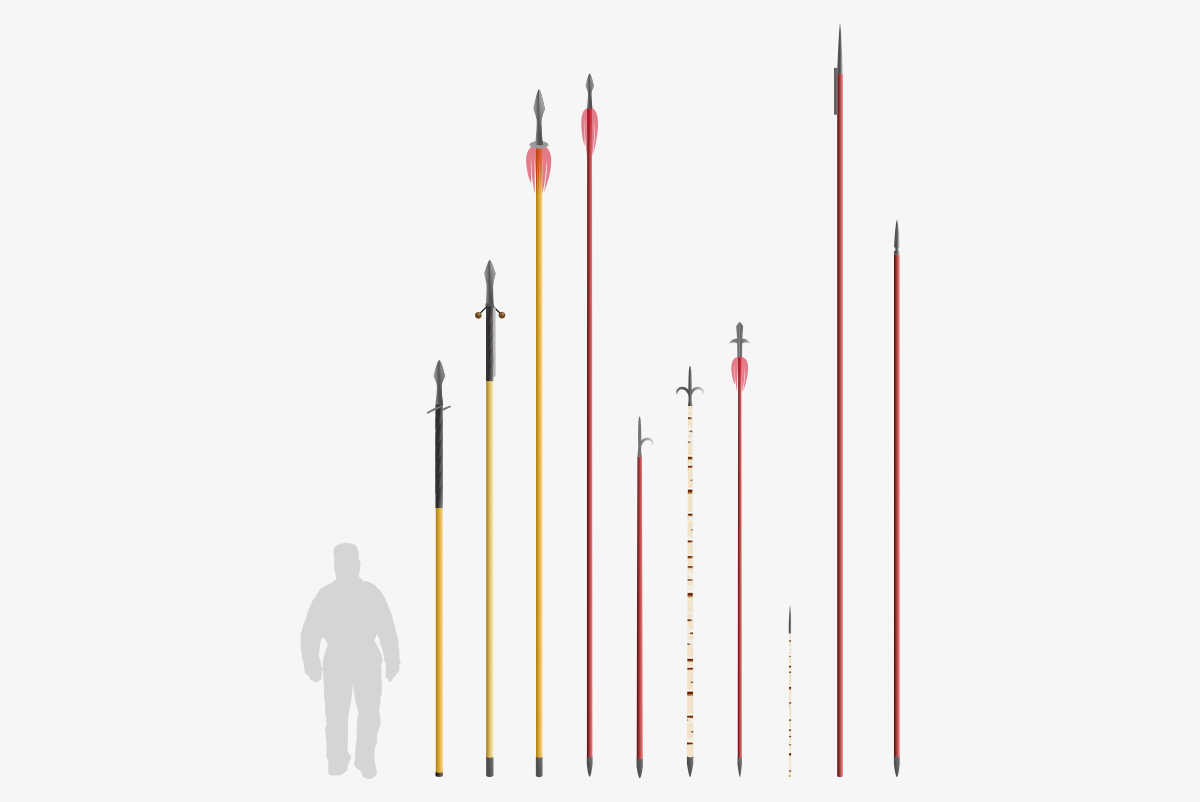 Spears of the Qing dynasty

In this article I highlight a number of spears used by the Qing dynasty military. They come from the Huangchao Liqi Tushi (皇朝禮器圖式 ) of 1766, based on a 1759 manuscript. It was compiled under auspices of the Qianlong emperor himself, who -to our fortune- was all about the careful recording of the minute details of the workings of his dynasty.

The work lists no less than 31 polearms, among which various types of spears, forks, and halberds. For this article I have kept to the spears and their close relatives, leaving out some of the less conventional shapes, coming to a total of ten spear types.

The Chinese didn't differentiate between spear and lance, both are called qiāng (槍). As such we do not always know which of these were used on foot, and which from horseback. I will consistently call them spear in this article, even though some are surely used as lances, they may have doubled as spears. On military artwork of the Qing, we frequently see even Manchu elite cavalry dismount and face the enemy on foot with bow, arrow, and spear.

An interesting difference between the spears in this article and the spears we see later in the hands of civilian militia and martial artists is that the military spears have less of a taper and are mostly counterbalanced by a large steel fitting at the butt end. Civilian and martial arts spears are often balanced by having a strong taper, with a very thick butt end narrowing down considerably towards the tip. The metal parts being quite expensive in pre-industrial China, this was probably a cheaper way to reach a similar balance.

In the following diagram, I have drawn all ten spears to scale, as described in the historical text. On the left a silhouette of a man, 170cm tall. 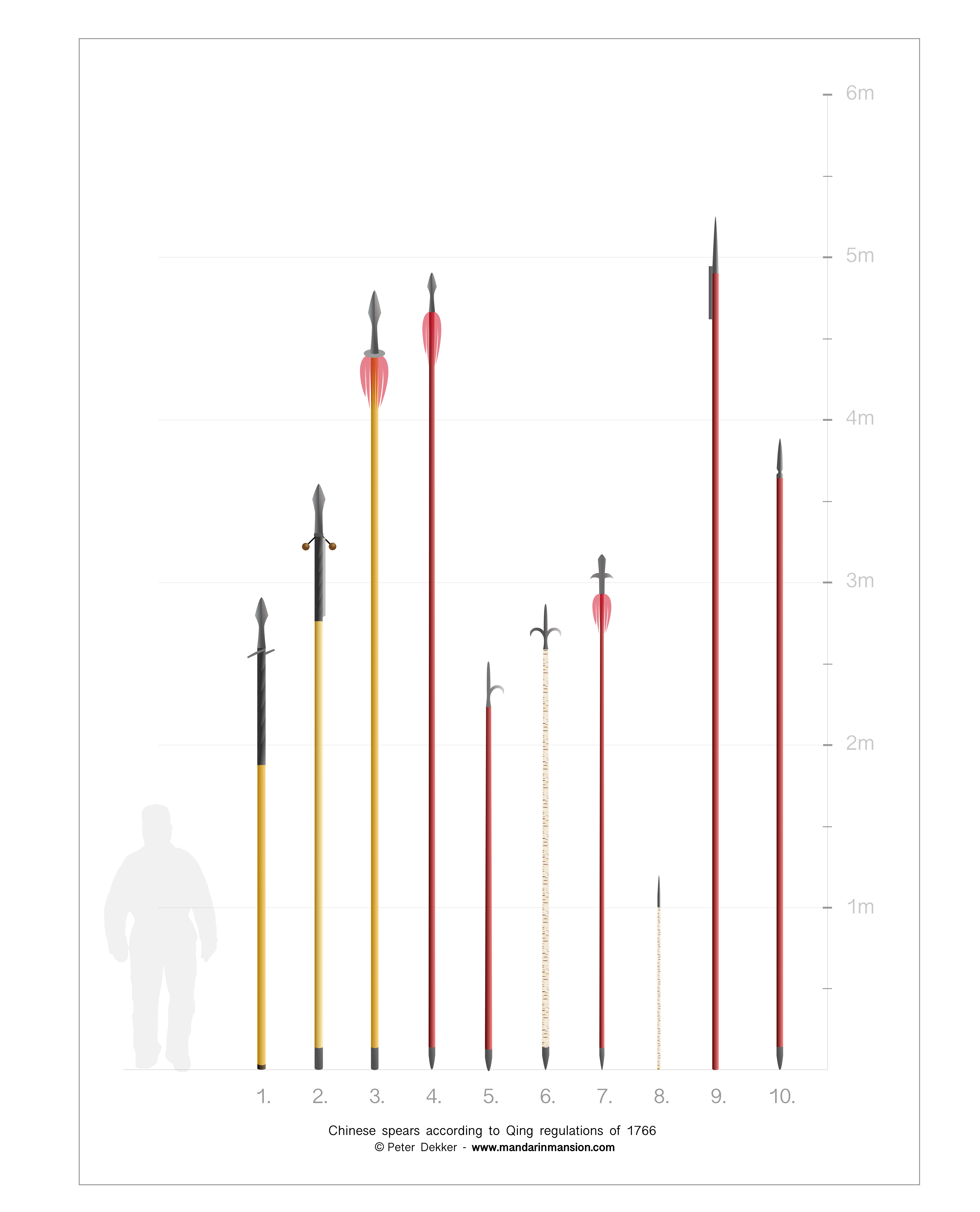 Spear 1 to 3 were in use by the Manchu and Mongol troops of the Eight Banners, an elite front-line army that was stationed in the capital and a series of garrisons on strategic locations. Spear 4 to 10 were in use by the all-Chinese "Green Standard Army" which served as internal peacekeepers and a backup to the Eight Banners armies in larger conflicts. They were spread over many towns and garrisons across the empire.

We can see that Eight Banner spears are massive compared to those of the Green Standard Army. Also, the shafts are all natural wood with no additional finish. The Green Standard Army spears, adhering to Chinese traditions inherited from the Ming dynasty, are almost all lacquered vermillion. Also, Eight Banners spears all have "stoppers" to keep a target from moving in too close. This initially came from the Manchu large game hunting spears.

Below the original woodblock prints of the Huangchao Liqi Tushi, together with my translations and some added notes.

I have used a one chi equals 35 cm conversion. This is slightly larger than the generally accepted conversion of 1 chi equals 32 cm. In the Qing, sizes were not as standardized as today and ruler sizes varied from trade to trade, place to place, and even from guild to guild within a single profession. I recalculated the Beijing imperial armorer's ruler from antique arms that were made according to the published regulations. 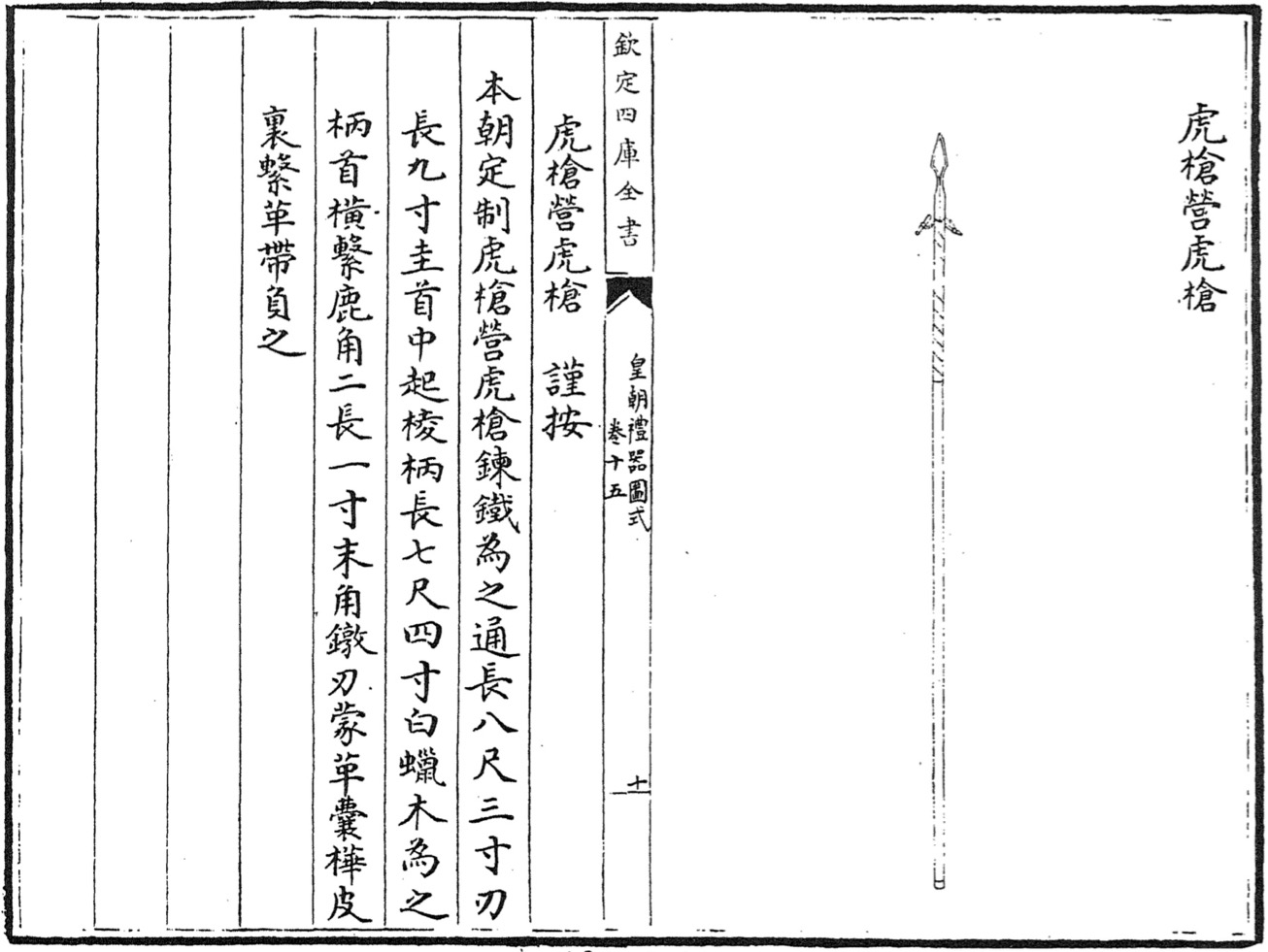 "According to the design of the 14th year of Qianlong.

Regulations of the dynasty; Tiger Spear Division's Tiger Spear: Spearhead made of forged steel. Overall 8 chi 3 cun long. Spearhead is 9 cun long, with triangular tip and center ridge. Shaft is 7 chi 4 cun long, made of white waxwood. At the top of the shaft are tied two transverse pieces of deer antler, 1 cun long. There is a horn ferrule at the end of the shaft. The spearhead is covered with a leather bag, wrapped with birch bark. It is carried by tying it to a leather belt."

Notes
The Tiger Spear Division was set up in the 23rd year of Kangxi (1677). They were the best horseback archers drawn from the Eight Banners Vanguard, Guard Division, and Firearms Division. They served as imperial guards while the emperor was in the imperial hunting grounds of Mulan, an area full of wild animals such as bears and the large Siberian tiger. Their spear was a traditional Manchu hunting spear, with its two deer horn stoppers to prevent the spear from penetrating so deep that the animal could reach the wielder. They are related to Siberian hunting spears. 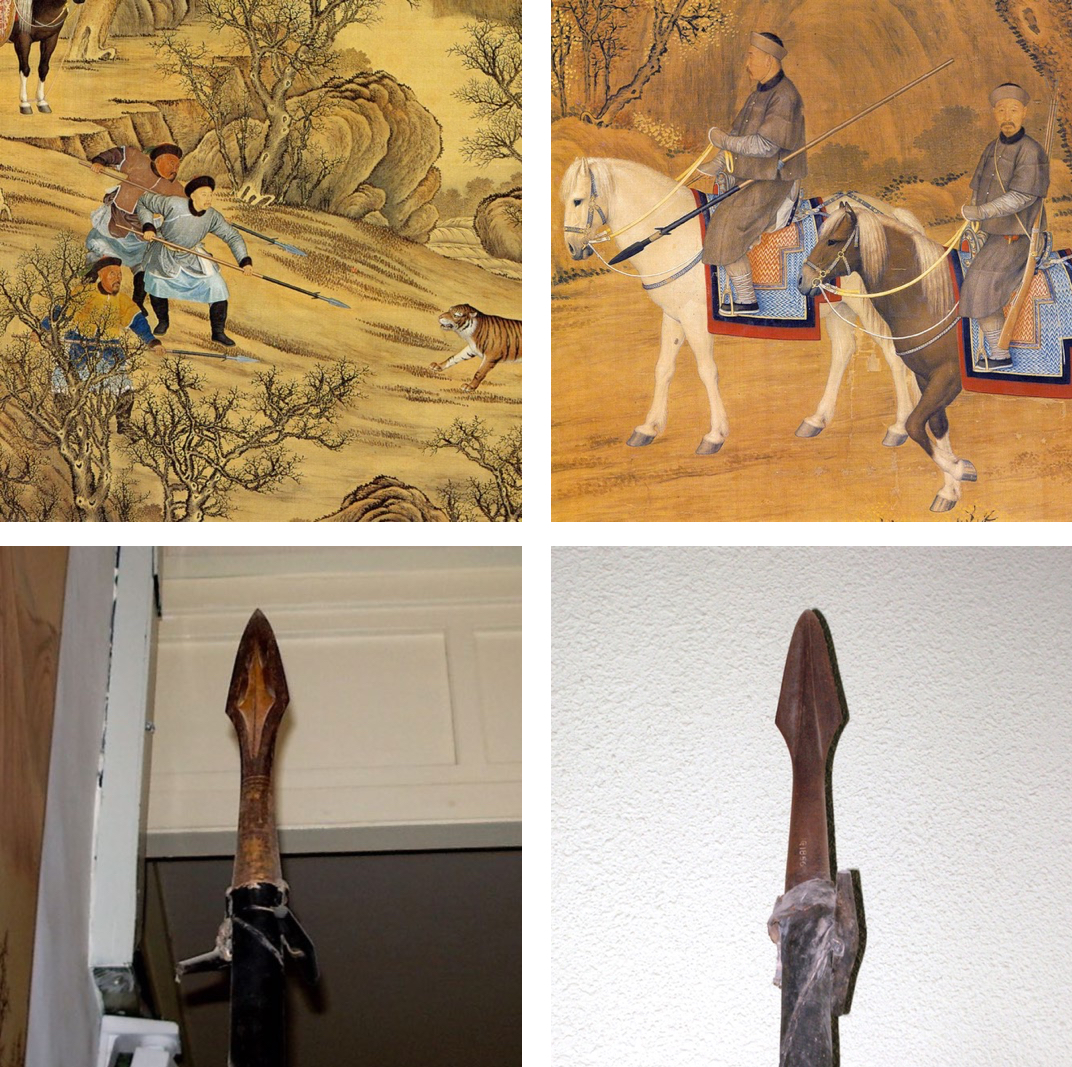 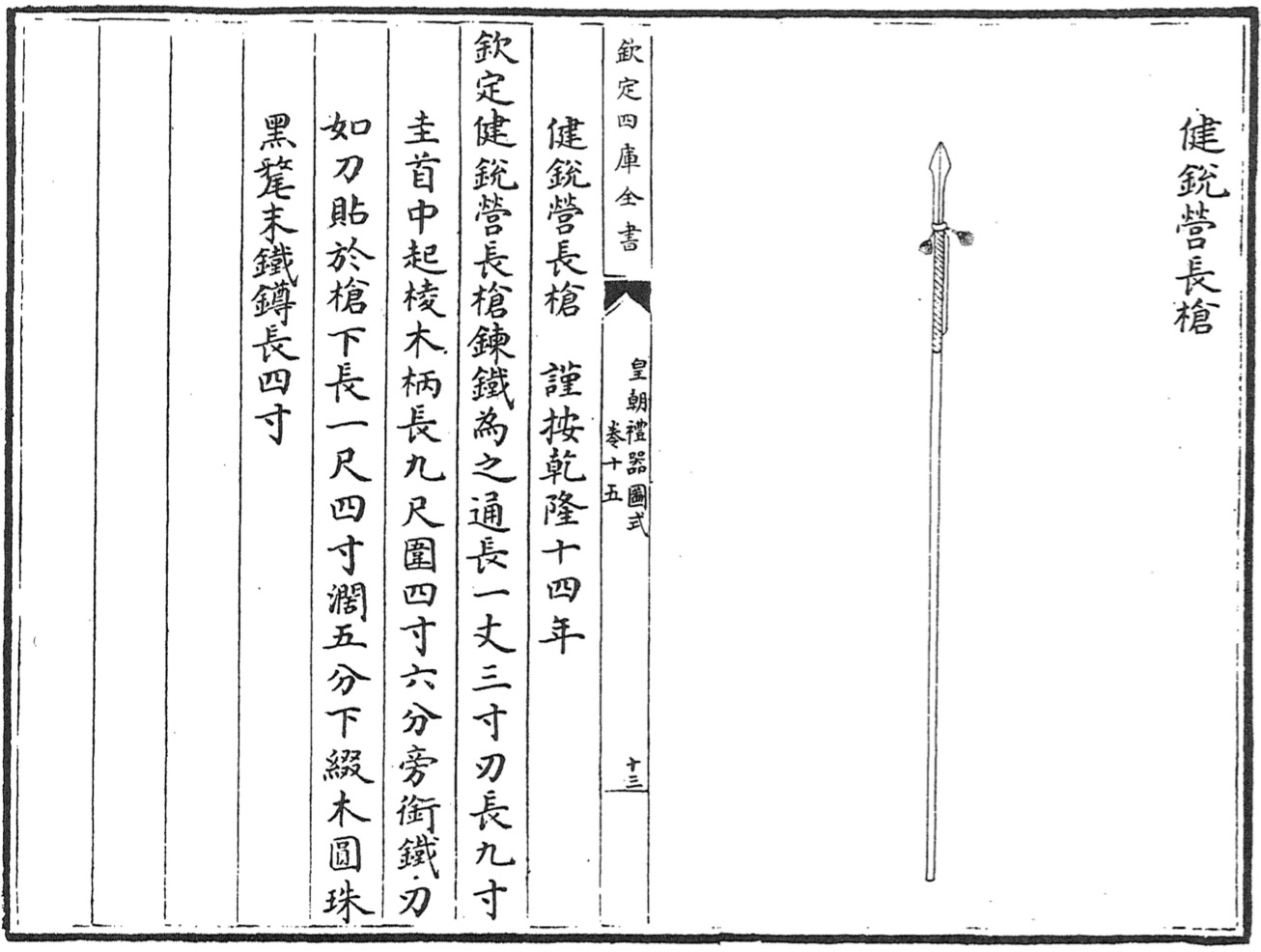 "According to the regulations of the dynasty; Jianruiying Long Spear: Spearhead made of forged steel. Overall 1 zhang 3 cun long. Spearhead is 9 cun long, with triangular point with a central ridge. The wooden shaft is 9 chi long and the circumference is 4 cun 6 fen. It has steel edge like a knife inserted in the side, glued into the spear, that is 1 chi 4 cun long and 5 fen wide. Under [the spearhead] are connected two wooden balls with black horse hair. Steel fitting at end is 4 cun long."

Notes
An interesting adaptation of elements from the Tiger Spear Division's Tiger Spear and the Green Standard Army Nail Spear: It has round stoppers to keep the opponent at a distance and a sharp edge glued in the shaft to prevent the opponent from grabbing it.

Read more about this spear's design and the unit that used it in my article about the Jianruiying special forces: 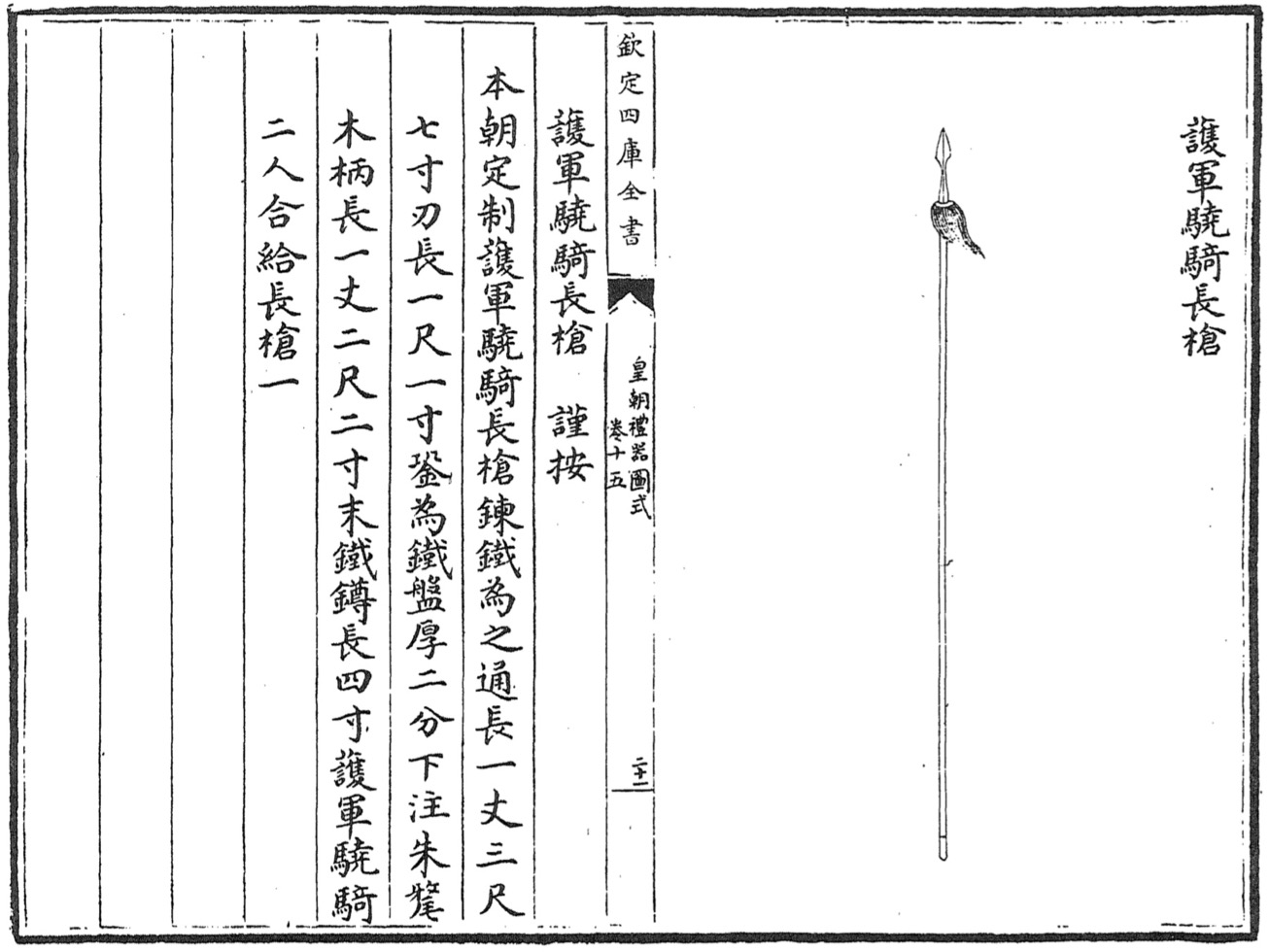 Notes
The Guard Division was part of the elite Eight Banners army, responsible for guarding the rear of the army on campaign. The Valiant Cavalry suggests these were primarily lances issued to horsemen. 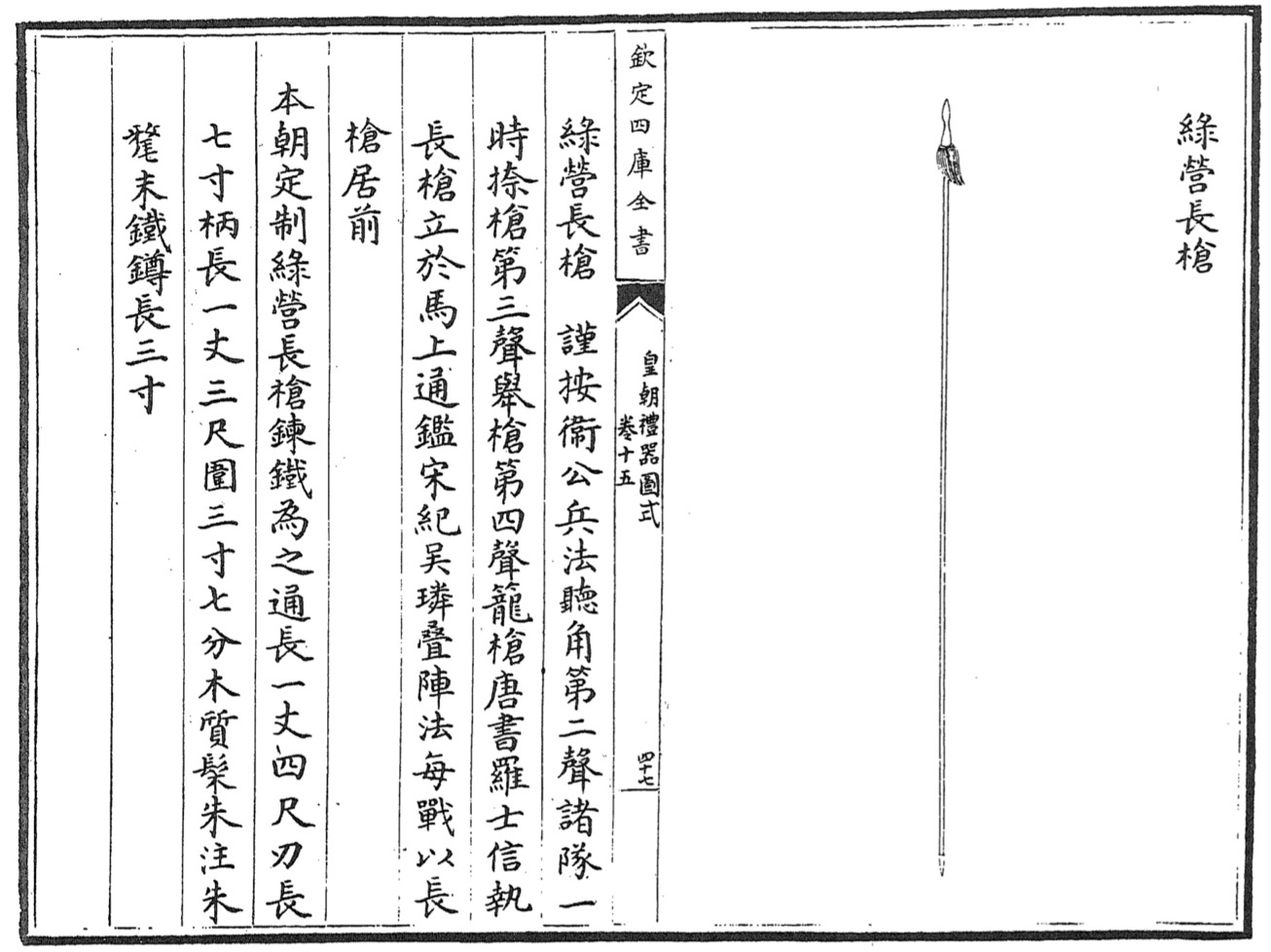 "According to the regulations of the dynasty; Green Standard Army Long Spear: Spearhead made of forged steel. Overall 1 zhang 4 chi long. Spearhead is 7 cun long. Shaft is 1 zhang 3 chi long with a circumference of 3 cun 7 fen. Made of wood, lacquered vermillion. It has a red yak hair tassel. Steel fitting at end is 3 cun long." 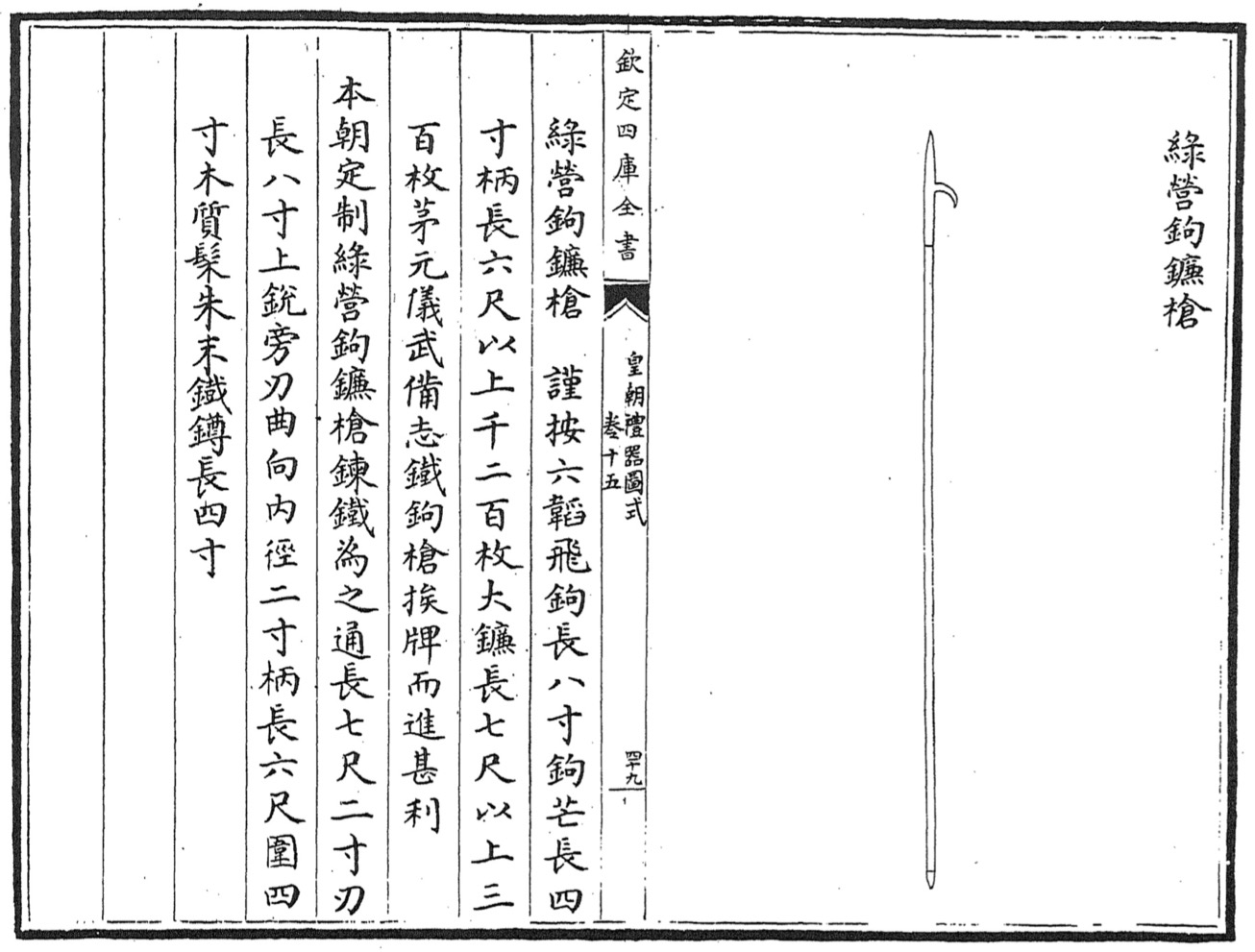 "According to the regulations of the dynasty; Green Standard Army Hook Sickle Spear: Spearhead made of forged steel. Overall 7 chi 2 cun long. Spearhead is 8 cun. The top is sharp, on the side is a blade curved inwards, inner diameter 2 cun. Shaft is 6 chi long with a circumference of 4 cun. Made of wood, lacquered vermillion. Steel fitting at end is 4 cun long."

Notes
Such hook spears can be formidable weapons against shield-bearing troops where the hook can be used to pull the shield aside, followed by a thrust. It might also serve well for guards, where trespassers can be caught or tackled. 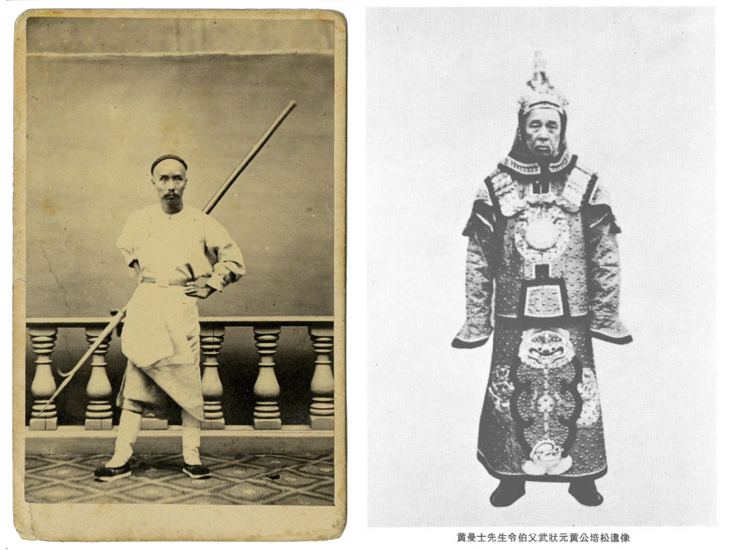 Photograph of a spearman with his hook sickle spear.
Photograph by S. Schoenke, a photographer and watchmaker that was active in Fuzhou from 1862 - 1889.

He continued to serve as a military officer under Yuan Shikai in the early republic. He passed away in Suzhou in 1925.

For the contents of the examination he passed with flying colors, see my article on the Jiangnan examination results. 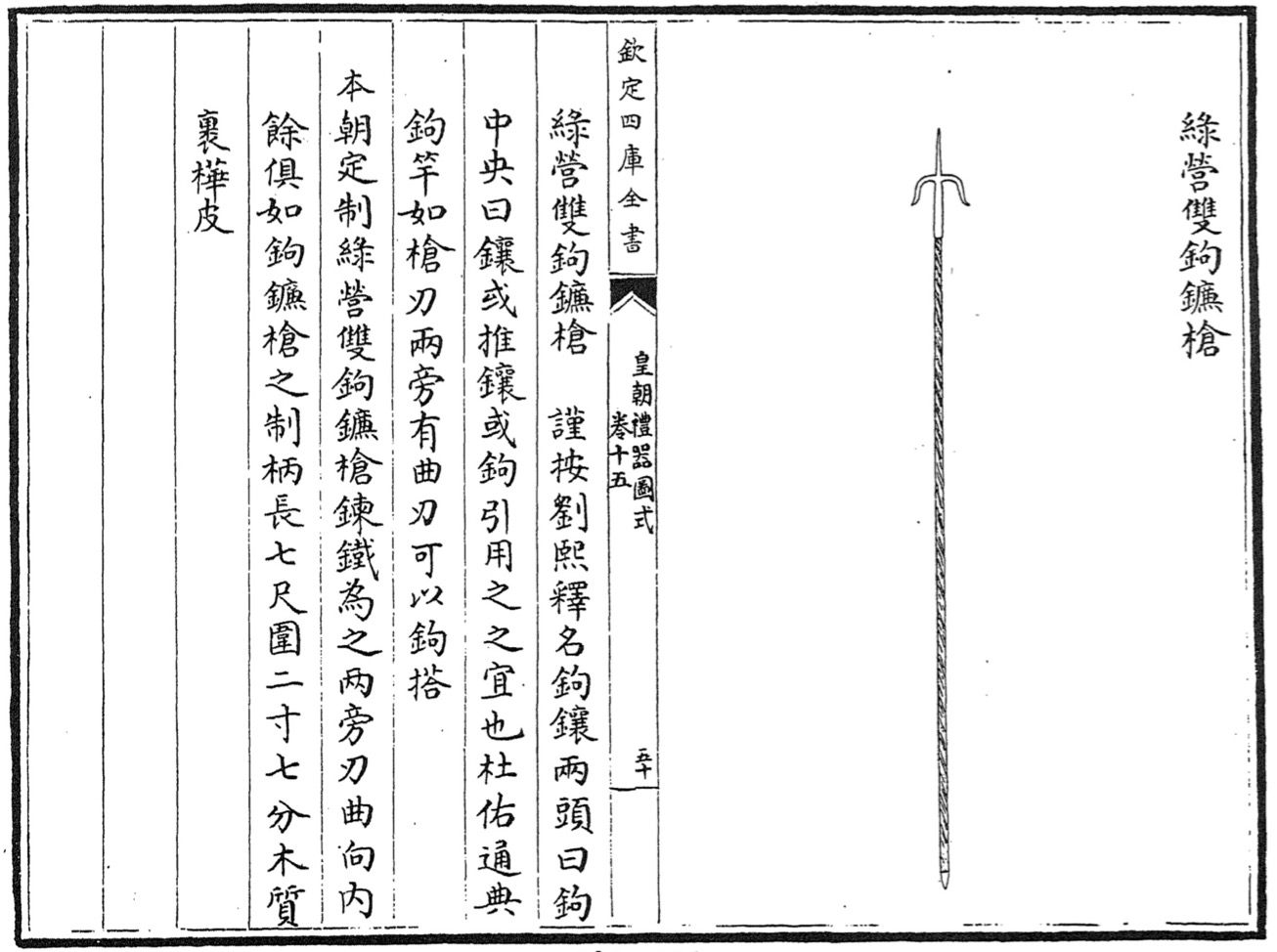 "According to the regulations of the dynasty; Green Standard Army Double Hook Spear: Spearhead made of forged steel. It has two blades o the side, curving inwards, constructed like the Hook Spear. Shaft is 7 chi long with a circumference of 2 cun 7 fen. Shaft completely wrapped with birch bark."

Notes
An interesting variation with double hooks. Curious is the shaft, which is completely wrapped with birch bark. 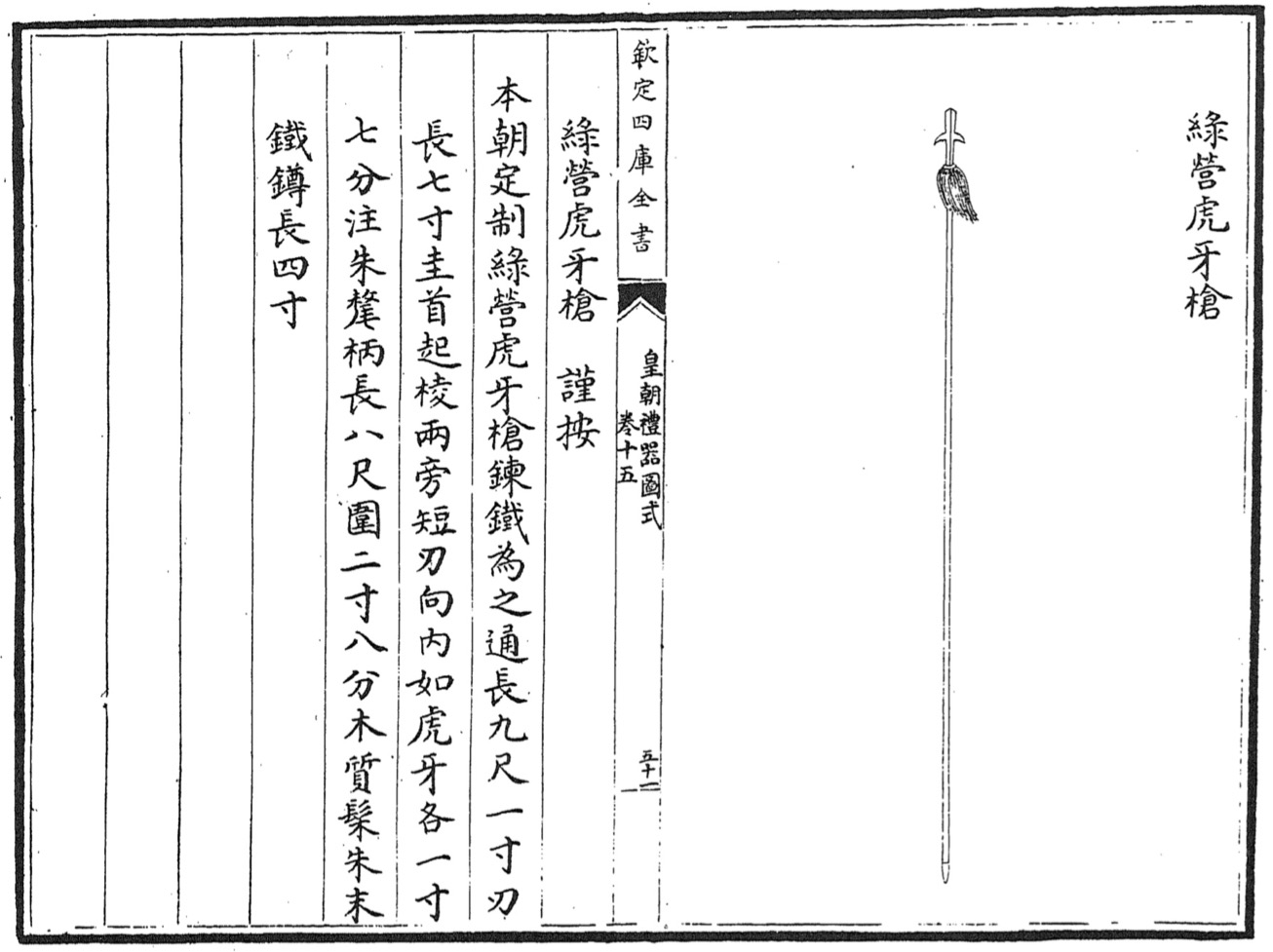 "According to the regulations of the dynasty; Green Standard Army Tiger Tooth Spear: Spearhead made of forged steel. Overall 9 chi 1 cun. Spearhead is 7 cun long with a triangular point and center ridge. Either side has a short edge shaped like a tiger's tooth, both 1 cun 7 fen long. It has a red yak hair tassel. Shaft is 8 chi long with a circumference of 2 cun 8 fen. Made of wood, lacquered vermillion. Steel fitting at end is 4 cun long."

Notes
This interesting design has a rather flattened head and two "teeth" protruding from the sides. Its use is unclear. The teeth seem somewhat short for effectively hooking a shield or weapon, so they are perhaps meant only to deal damage to the opponent's body instead. 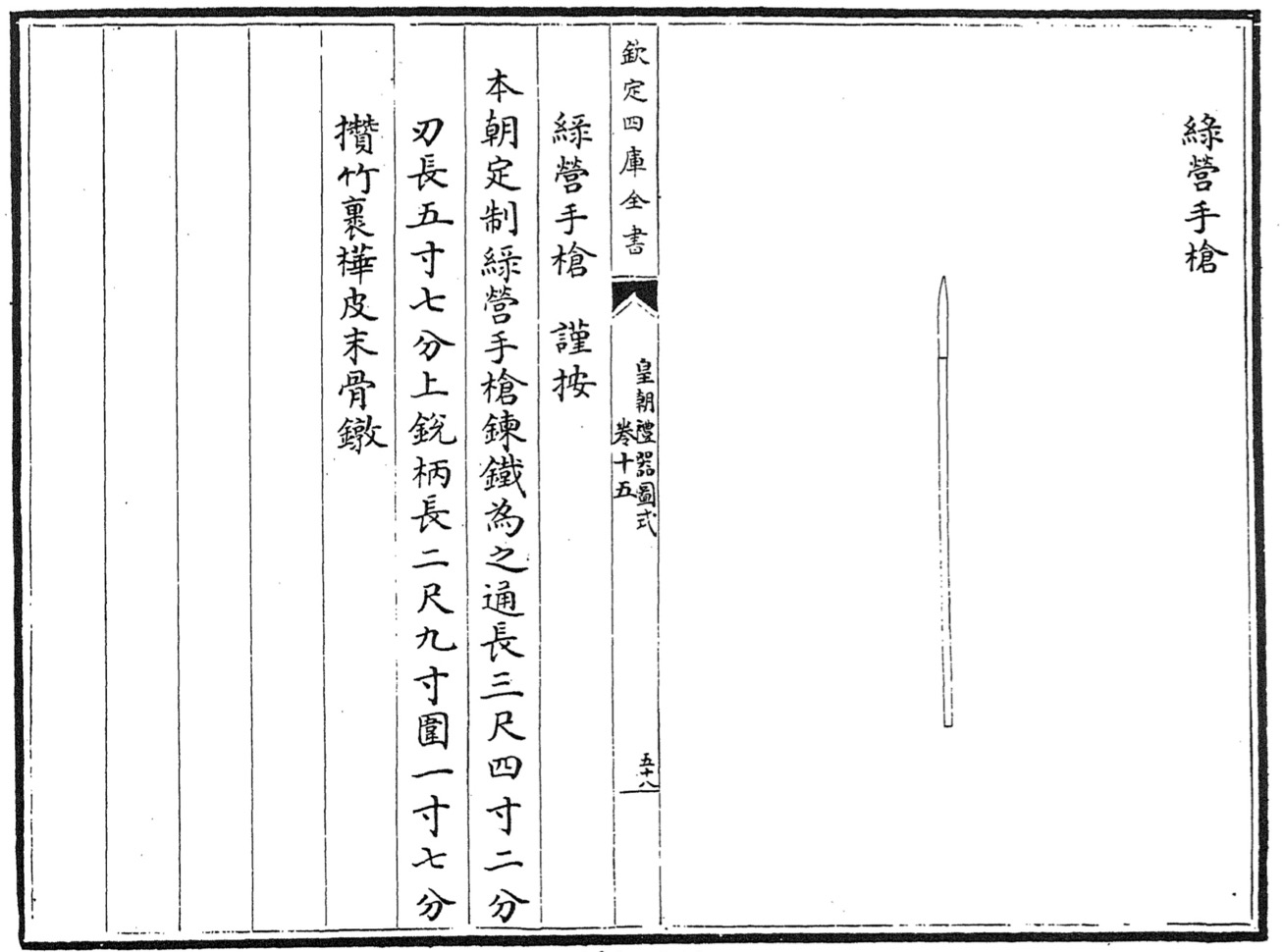 "According to the regulations of the dynasty; Green Standard Army Hand Spear: Spearhead made of forged steel. Overall 3 chi 4 cun 2 fen long. Spearhead 5 cun 7 fen long, sharp tip. Shaft 2 chi 9 cun long with a circumference of 1 cun 7 fen. Made of joined bamboo [strips], wrapped with birch bark. It has a bone ferrule at the end."

Notes
These are not javelins for throwing, as those are covered in a different part of the same text. The construction with various strips is also used on Ming era Chinese arrows and on Japanese spears. It makes a rather light, but very strong shaft. The use of these small hand spears is probably as close quarters thrusting weapons. There is a beautiful example with golden decorated tip in the Palace Museum collection in Beijing. 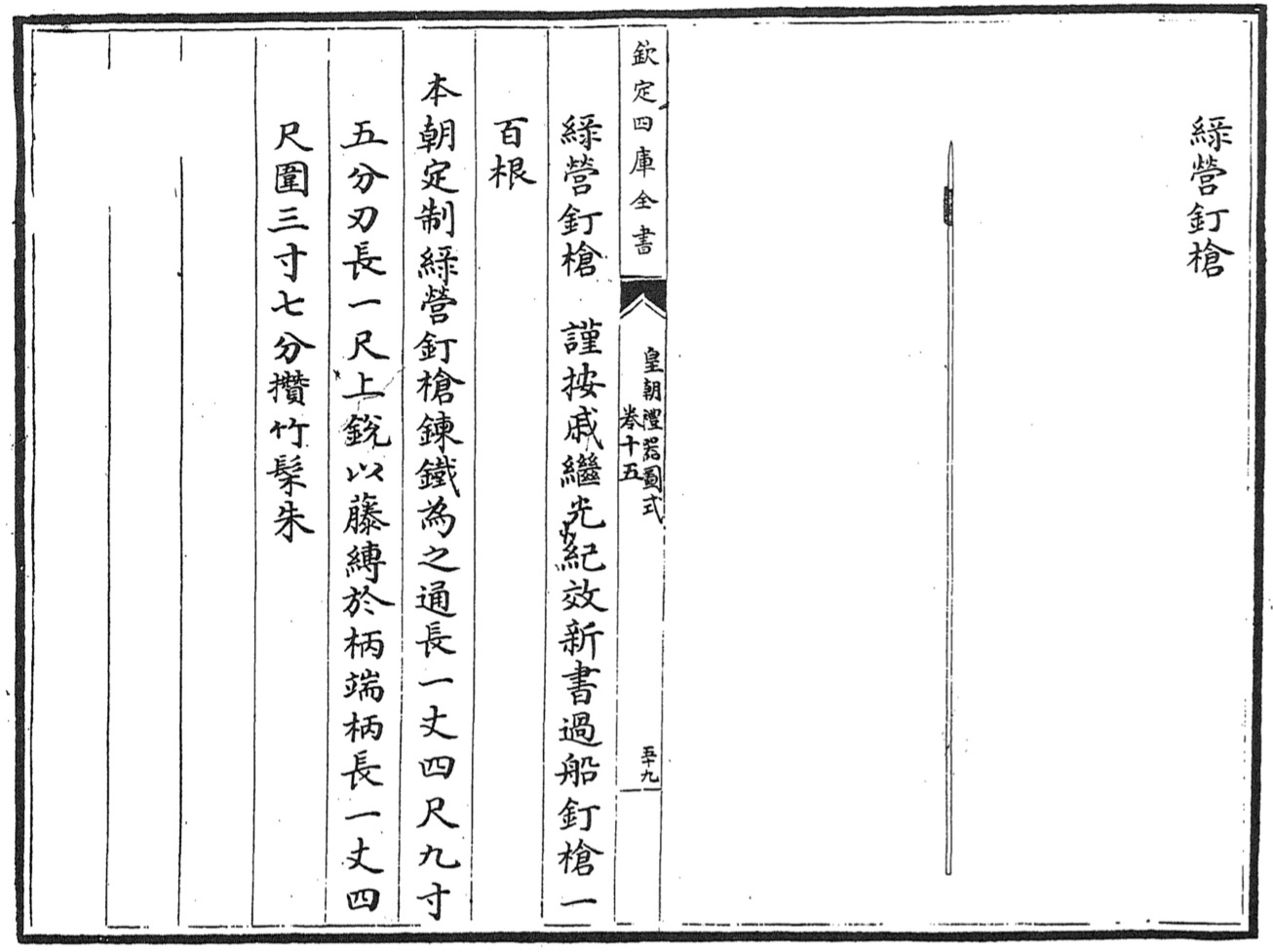 "According to the regulations of the dynasty; Green Standard Army Nail Spear: Spearhead made of forged steel. Overall 1 zhang 4 chi 9 cun 5 fen long. Spearhead is 1 chi long. On top is a sharp [edge] tied in place to the top of the shaft with rattan. Shaft is 1 zhang 4 chi long with a circumference of 3 cun 7 fen. Made of joined bamboo [strips], lacquered vermillion."

Notes
Although described as a Green Standard Army spear, you also see this specific spear in the hands of Eight Banners troops and even on paintings in use by their Dzungar adversaries. The style may have even been inspired by lances encountered from the Dzungars, as we consistently see Dzungar troops depicted with them in battle paintings of the East-Turkestan campaign of 1755-1759. 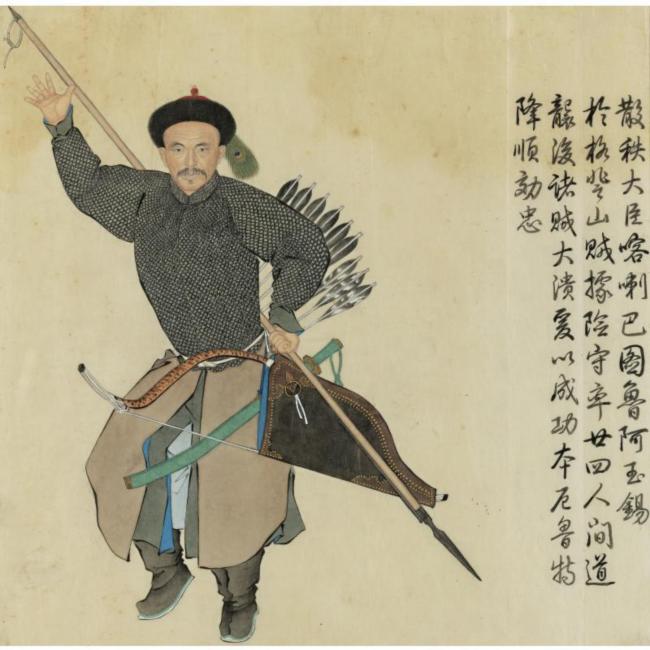 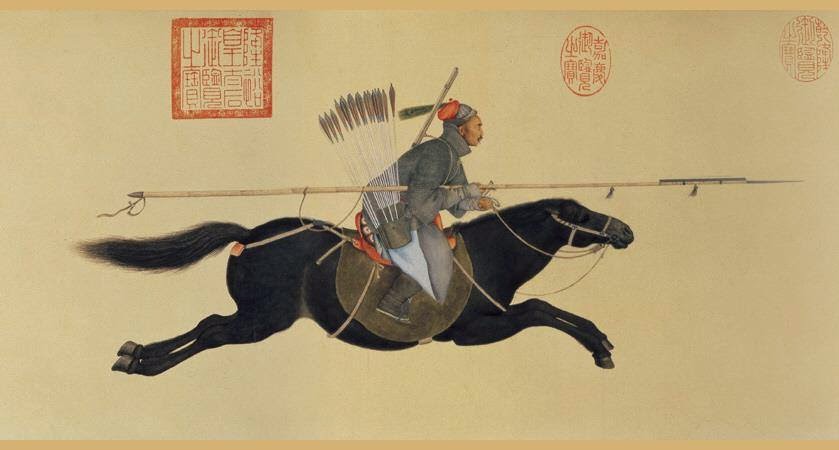 Former Dzungar Ayusi who defected to the Qing. He became a loyal warrior and high level military commander for the Qing. He was known as an unrivalled spearman, and is always depicted with his "Nail Spear", on foot and on horseback. 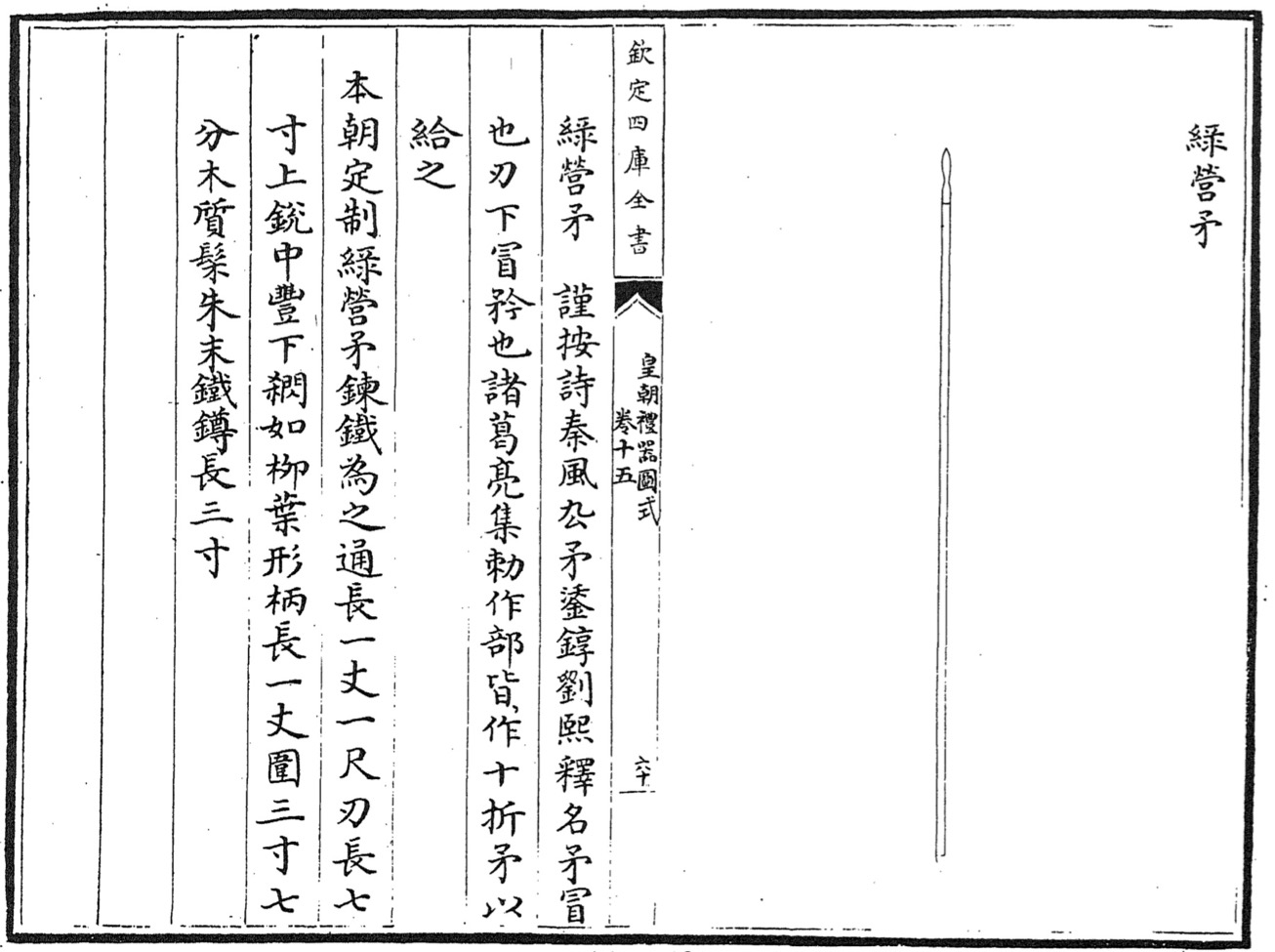 "According to the regulations of the dynasty; Green Standard Army Spear: Spearhead made of forged steel. Overall 1 zhang 1 chi long. Spearhead is 7 cun long. Sharp on top, fat in the middle, reduced at the bottom, like the shape of a willow leaf. Shaft is 1 zhang long with a circumference of 3 cun 7 fen. Made of wood, lacquered vermillion. Steel fitting at end is 3 cun long."

Notes
Note that in the Chinese text the word for spear in this entry is not the common qiāng (槍), but the somewhat less common máo (矛). Qiāng come in various shapes and sizes, some leaf-shaped, others with wilder shapes like a cross or blazing fire. Máo, at least in the Qing, differentiate from qiāng in that they have long and slender heads with a rather thick cross-section. They are more suited for the armor piercing thrust, and less for the cut, than most varieties of qiangencountered, and may have primarily served as lances.