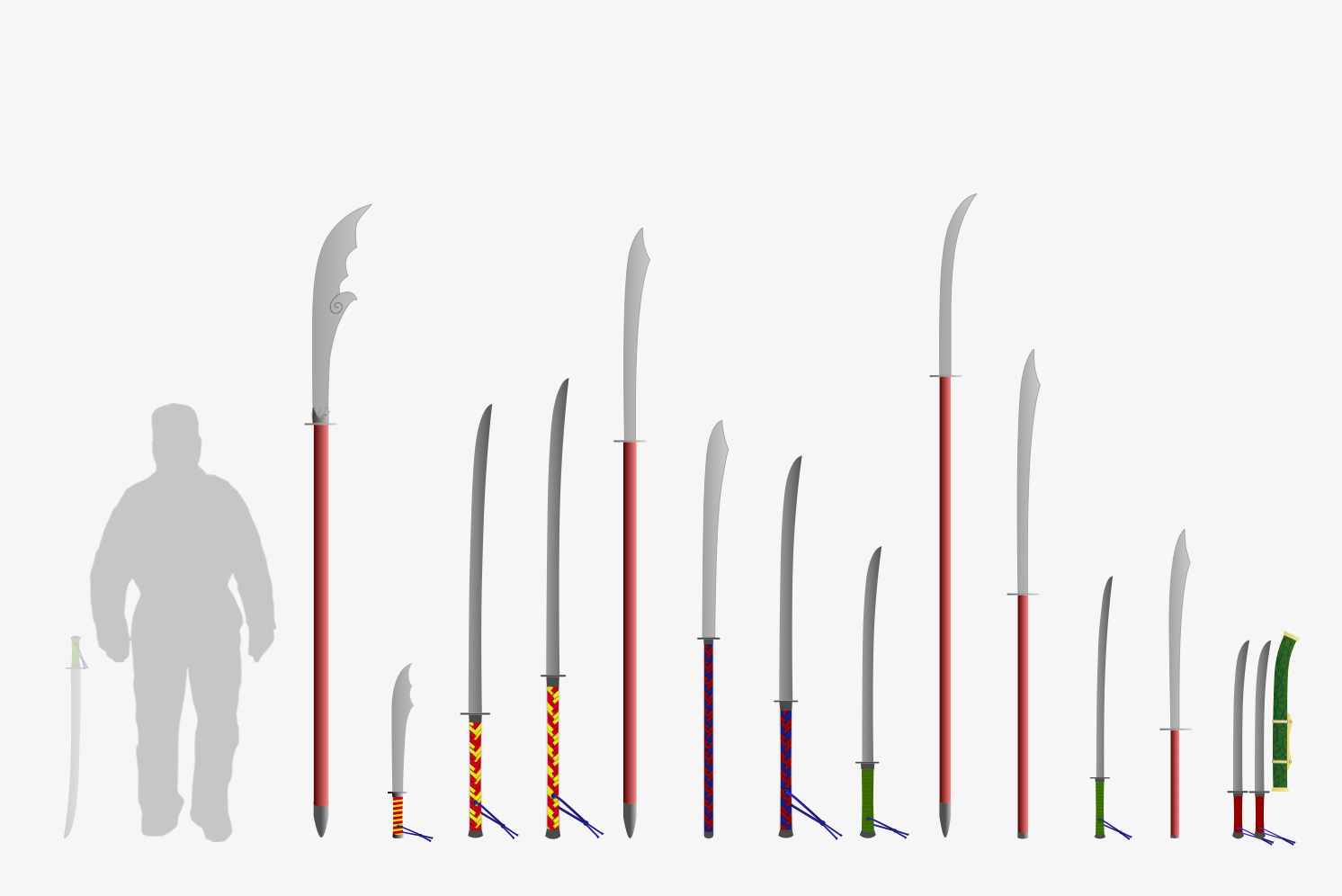 The Green Standard Army was a large standing army of the Qing dynasty. It was composed entirely of soldiers of the Han dynasty, lead by a mix of Chinese and Manchu officers. It was the largest troop force the Qing had, three times larger than the Eight Banners.

It was mainly an infantry force. Structure, weapons, and tactics were largely inherited from the preceding Ming army, and it was also sometimes called the "old Han army". They were mostly scattered over a large number of garrisons throughout the empire, many in rural areas. Their roles varied from local police-like roles to peacekeeping in times of local unrest, to supervising river conservancy and food transports. In some cases, they formed a front-line army that aided the Eight Banners.

Arms standardization in the 18th century

Historical accounts describe a great number of weapons in use by the Green Standard Army, often reflecting local martial arts traditions. This meant that when the central command ordered 1000 spears to be made in one province, the resulting weapons were not always the same shape and size of that of a different province. As a result, the costs of labor and materials also greatly varied.1

In the 18th century, the Qianlong emperor strived for more standardization in attempts to regulate the costs and material usage of his armies while maintaining their effectiveness in the field.  This resulted in various texts describing the types of weapons and their construction, as they would ideally be produced across the empire.

One of these texts which is particularly valuable to the student of Chinese arms and armor is the illustrated Huangchao Liqi Tushi of 1766, that was based on a 1759 manuscript. This text lists a great number of weapons and describes their sizes, materials, colors, and which units they belong to.2

The original text presents cartoon-ish black and white woodblocks with text in classical Chinese. For clarity of overview, I've made a schematic drawing of each of these weapons, drawn to scale and using the colors that are mentioned in the text.

The figure on the left is about 165cm tall, approximately 170cm measuring his hat. This would have been a fairly common size for Green Standard Army soldiers of most of China, keeping in mind that northern Chinese tend to be a little larger and southern Chinese tended to be smaller.

This time I've only included the dedicated cutting weapons. The many spears and other pole-arms illustrated in the same text will feature in a future article. 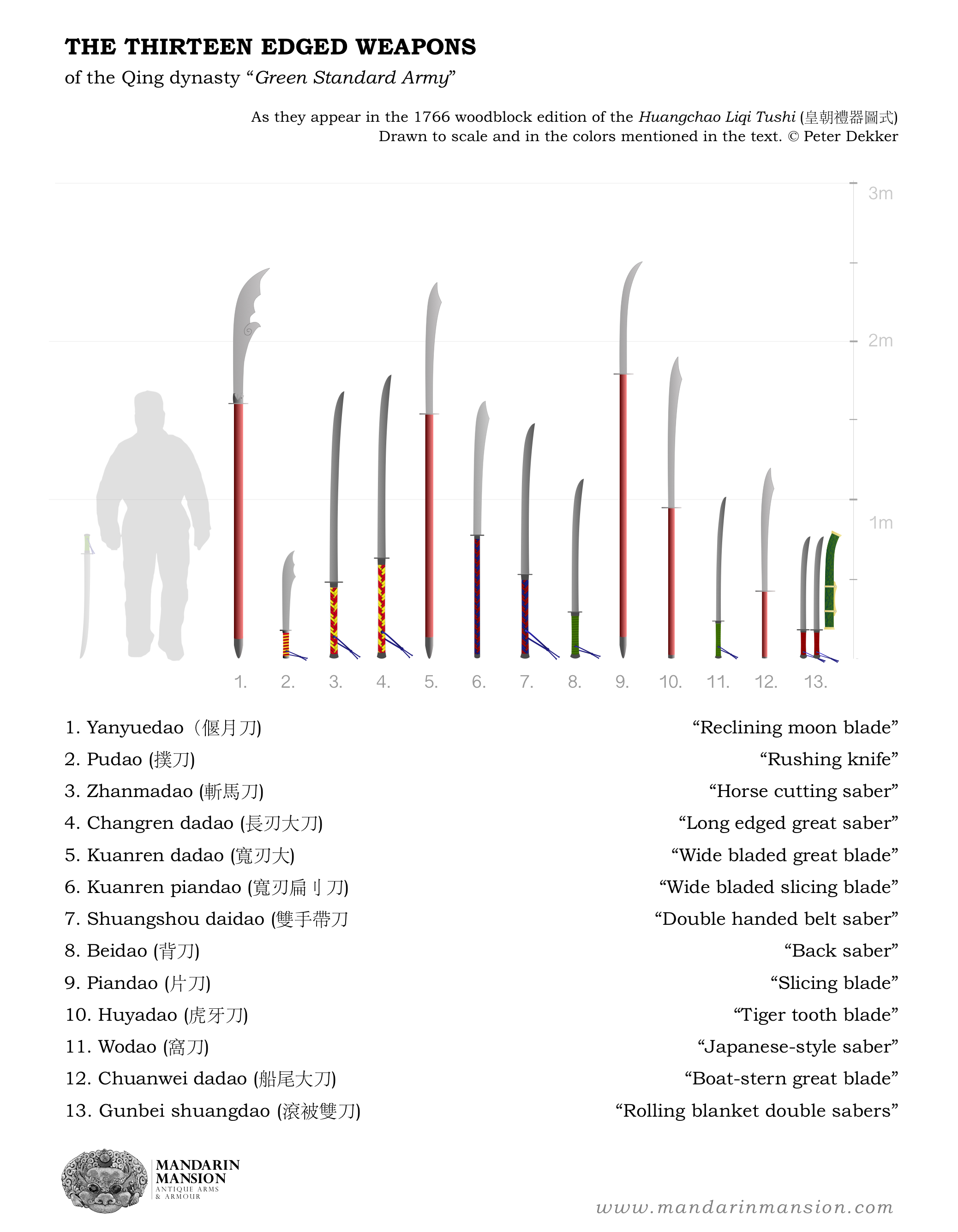 The contents of the visualization are not always in line with oral traditions as passed on through generations of martial artists.

This can be explained in part due to the fact that despite the efforts of the government, weapons and their names were never completely standardized in China. We can see this in the fact that names used can vary from source to source, even among some historical sources. The variation is even greater among arms that were never used by the military, and thus no attempts were ever made to standardize them.

Another obvious reason is that many errors inevitably slipped into martial arts jargon over time. Many aspects were forgotten and re-invented during the tumultuous 19th and 20th centuries when Chinese martial arts had to redefine itself several times to suit a new era.

The yanyuedao, for example, is commonly known today as a guandao but never appears as such in old texts from the Song dynasty to the Qing. It is as if the original name that was used consistently for centuries was suddenly forgotten somewhere in the early 20th century. Which makes sense as the piece had no use on the modern battlefield, and only was rediscovered as a training tool later. The name guandao is convenient as statues of Guan Yu always depict him with this weapon, and so everyone would know what weapon one meant.

This list based on the 1766 Huangchao Liqi Tushi represents what the Qing administration considered to be the correct names, colors, and sizes for these weapons during the height of Qing military power in the 18th century.

Names, sizes, and colors are often not consistent with what is considered common knowledge about these.

From an arms history perspective, this list should be considered leading when we want to advance the study of antique Chinese arms.

Notes
1. Ulrich Theobald, Space and Place in Administrative Military Regulations of Qing China: An Evaluation of the Legal Type of Zeli. Published in Extrême-Orient Extrême-Occident, vol. no 40, no. 1, 2016, pp. 183-206., Presses universitaires de Vincennes, 2016.
2. Pu Jiang et al., eds., Huangchao Liqi Tushi (皇朝禮器圖式), or "Illustrated Regulations on the Ceremonial Paraphernalia of the Dynasty", Palace Edition of 1766 (British Library, 15300.e.1). This version is based on a manuscript of 1759.