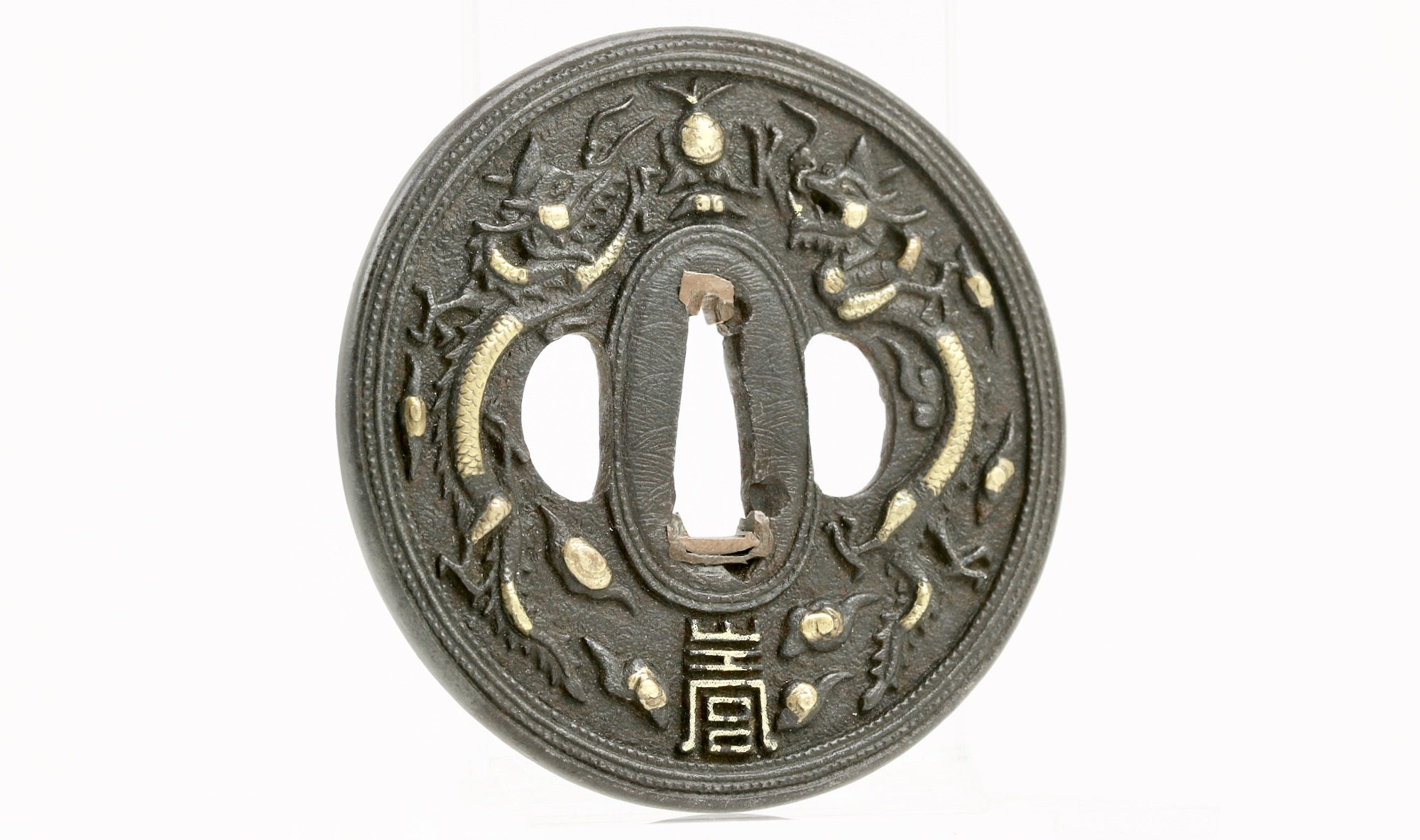 Private collection. Not for sale.

Asian export sword guards are sword guards, often roughly of Japanese form, that were made across Asia to be used in trade and diplomatic gifts. The target market was primarily Japan, where today most of them are found. Production centers were spread all over Asia, including Tonkin, China, Sri Lanka, and possibly Batavia.

In Japan, the genre is largely categorized under the label Nanban tsuba, the only "school" of Japanese sword mount making that has no founder and no lineage. Most Japanese collectors, including certifying institutions like NBTHK, are unaware of the non-Japanese origins of many of these.

A large circular Asian export sword guard with elaborate decor carved in relief on both sides. The front follows the typical form of a Canton tsuba with two facing dragons chasing a flaming jewel or tama. At the base is a character, 嵩 (song) which is the name of a sacred mountain in Henan, China. This mountain is an ancient symbol, often seen on imperial Chinese dragon robes up to the Qing dynasty, but also on ancient bronze mirrors as early as the 8th century.

Left: A Tang dynasty (8th century) Chinese bronze mirror, in the Japanese treasure house, Shōsō-in.
Middle: The guard currently described replaces the mountains for the character for that particular mountain range.
Right: A Canton tsuba from our Canton style study group that replaces the elaborate mountain for a much simpler one.

The 8th century depiction of the mountain is actually remarkably true to life, this is what the central mountain of Songshan looks like: On the reverse is an interesting mix of elements, with four running lions, three Chinese coins, and a peony flower. The arrangement is much like how they are depicted on the backs of some Chinese bronze mirrors, but also on Vietnamese sword guards: The peony is of a style often encountered on Japanese work, and also features on Dutch commissioned Sawasa wares.1The guard also has a peculiar rim that mimics rope or braided work, something seen on the fittings of some Vietnamese and other Southeast Asian sabers.

The whole represents a pan-Asian mix that is not easily attributed to a single culture, but the workmanship may betray where it was made: The high spots of the dragons and lions are highlighted with brass. See photo below, showing a Sinhalese kasthané decorated in a similar fashion. As it happens, the Dutch had a factory in Galle, Sri Lanka, that produced all kinds of weapons for presentation purposes, which is quite possibly where this guard was made. It deliberately mixes elements from dominant Asian cultures to appeal to an internationally minded market, just like sawasa wares.

The entire background behind the raised work is very finely carved with subtle floral designs. The tang aperture indicates it was once proudly mounted on a Japanese katana. The hitsu-ana were probably added later. This guard, and a group of similar pieces was extensively covered by James McElhinney; Sinhalese sword guards, made in Sri Lanka for the V.O.C.2

A very rare type of Asian export sword guard that was most likely made in Sri Lanka, commissioned by the Dutch V.O.C. Such guards could have served as objects for the private trade that many V.O.C. personnel were involved in, or could be used as diplomatic gifts. 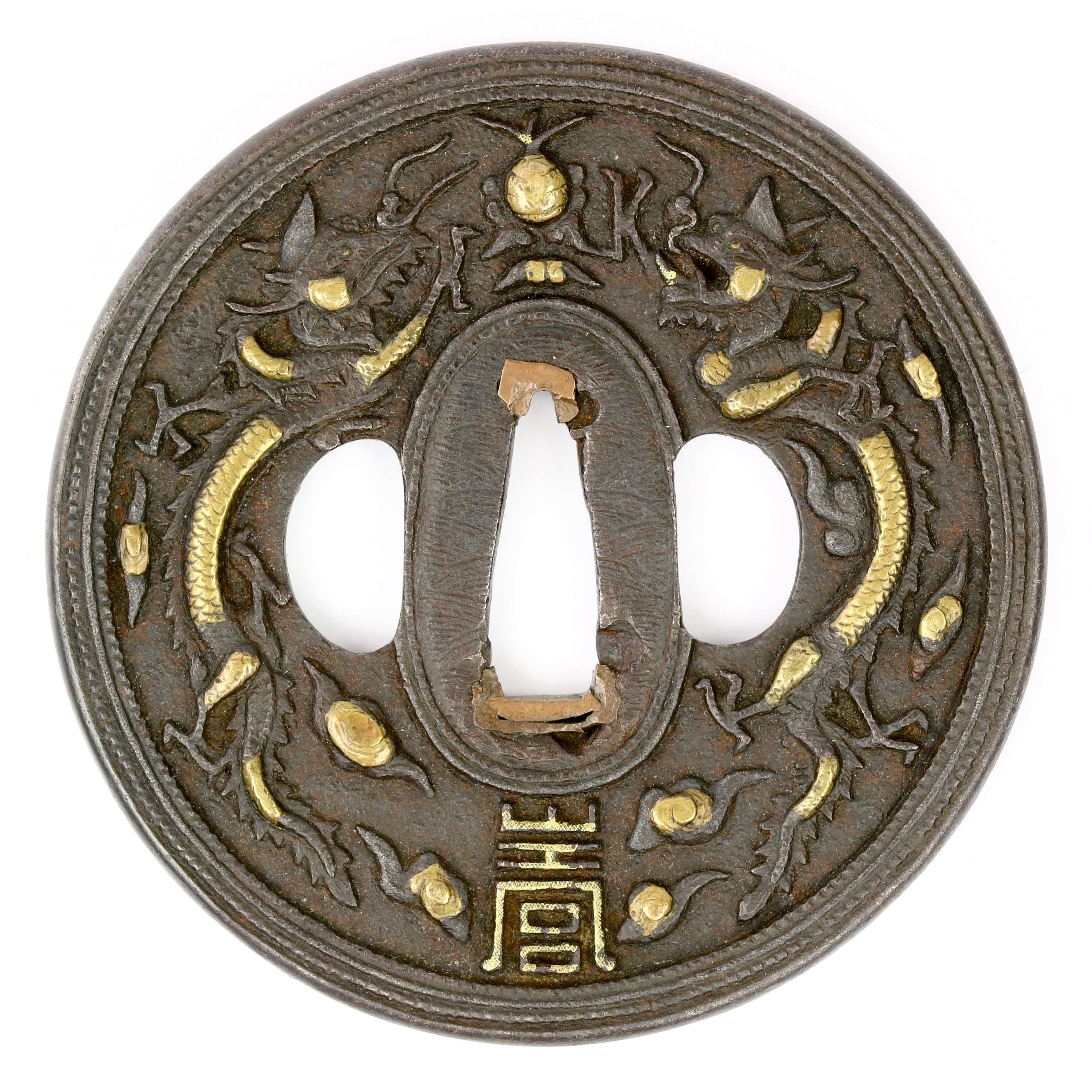 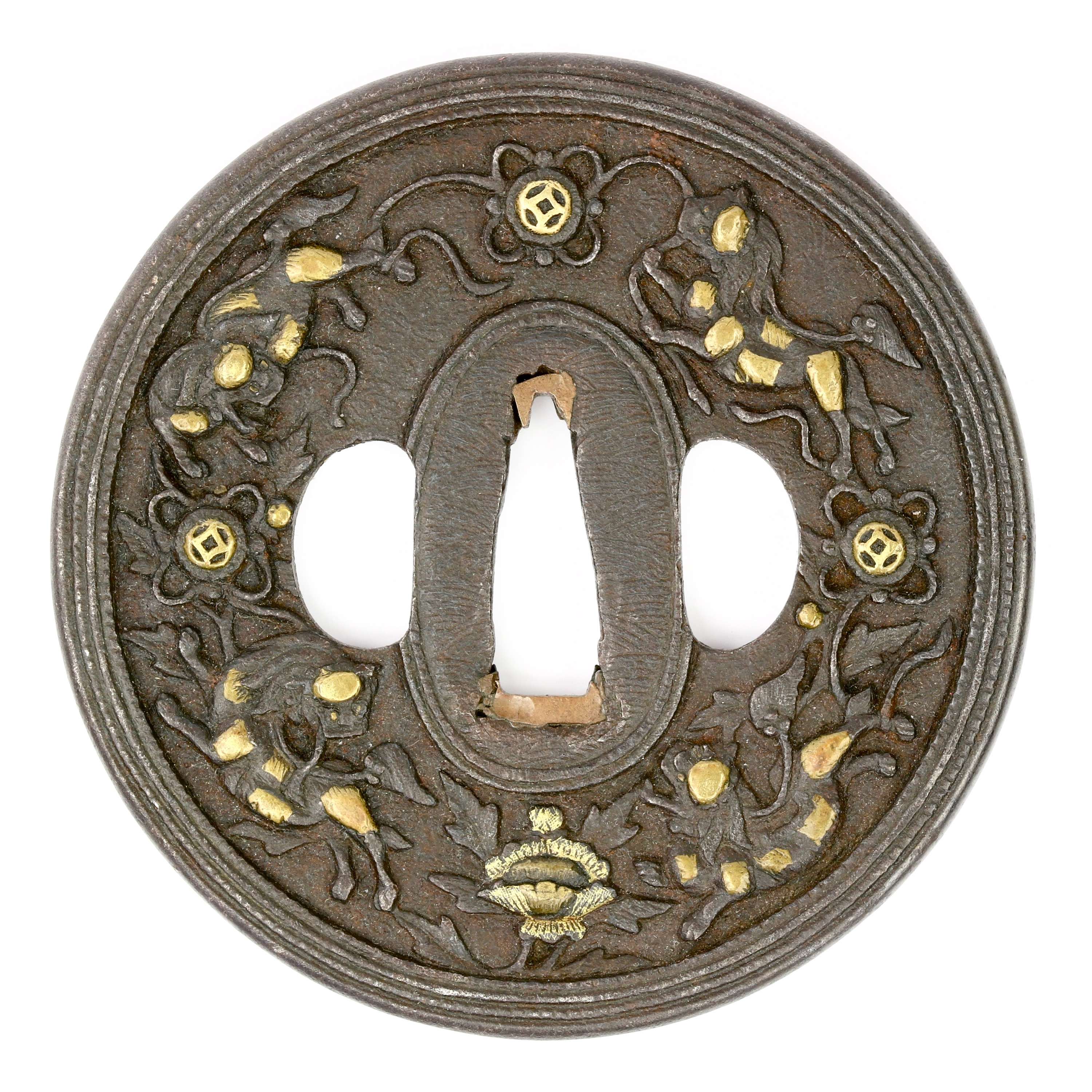