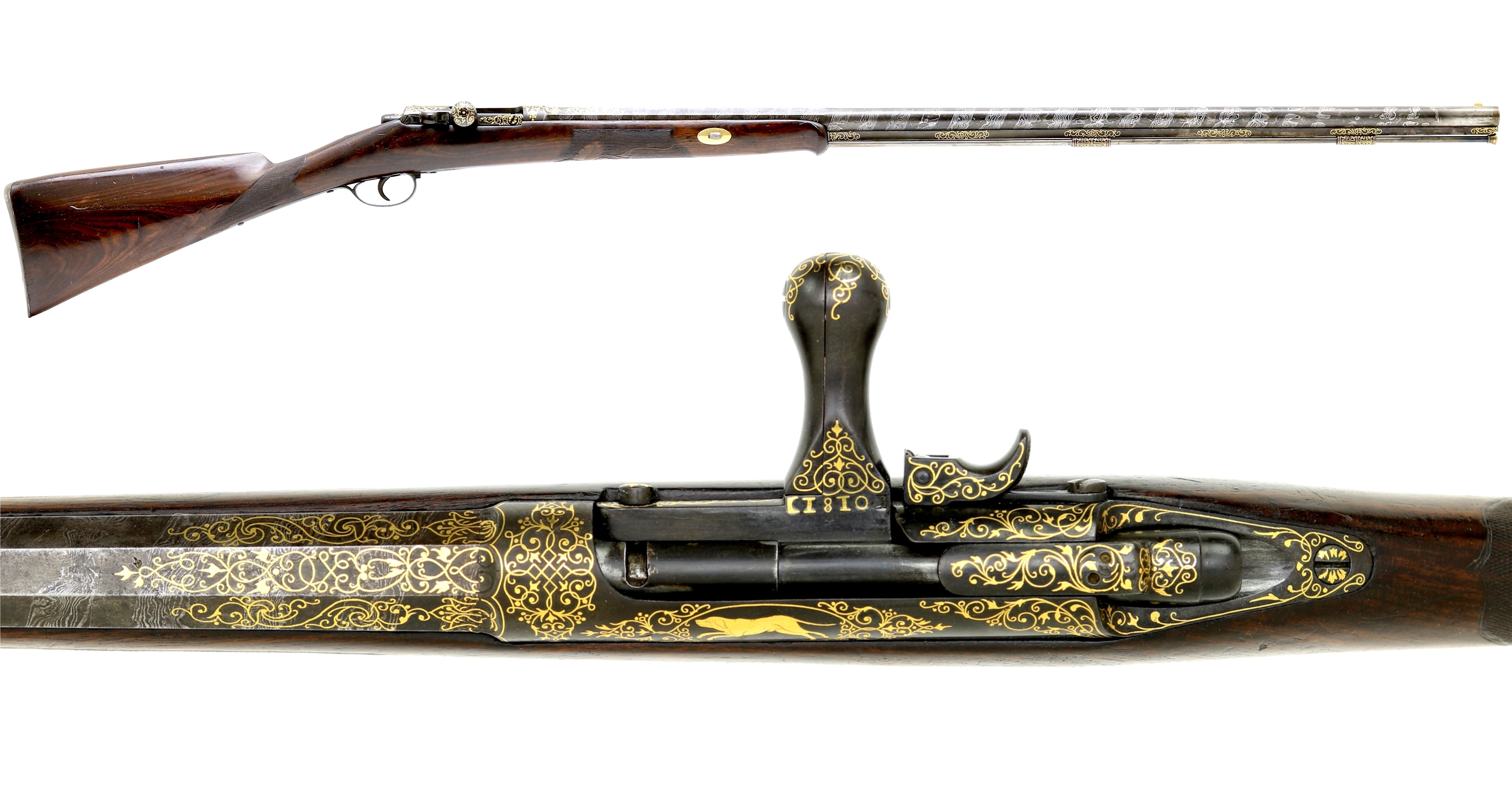 This fine sporting gun is based on the Beaumont turning bolt action rifle. The Beaumont was developed in the late 1860s by Edouard de Beaumont of Maastricht, the Netherlands. The design is unique in the fact that the mainspring is cleverly housed inside the bolt handle. From 1870 onwards it became the standard Dutch military gun, under the name model 1871 infanterie geweer klein kaliber. It was used widely in the Netherlands and the Dutch East Indies until it was replaced by the Mannlicher M1895.1

Our gun uses the turning bolt action mechanism of Beaumont's design, but the rest is all custom. It incorporates an external safety switch that went out of production in the Netherlands in 1878, but which remained in use longer among colonial forces in the Dutch East Indies.2 The trigger guard, too, appears custom and diverges from the typical Dutch trigger guard with a characteristic concave back that was in widespread use at the time.3

It has a finely forged barrel of a large caliber that goes from octagonal to a round cross-section. The barrel has a prominent twisted pattern (pamor) with a high contrast and smooth finish that reminds strongly of that found on some keris blades of Bali and Lombok. The bright silver patterns are usually accomplished by forging in iron or steel with a higher nickel content.

The barrel is further embellished with gold in true inlay. One can see the work of several hands on this piece. The decoration around the breech, including the dog, are of a style and workmanship more closely associated to European work. The gold inlays on the octagonal base of the barrel are done by a different hand, and show more of an Asian twist to the design and a slightly more loose execution.

Finally, there are floral elements and swastika patterns under the barrel, on the rod and the tubes that hold the ramrod, which are entirely Indonesian in both style and execution.

The barrel is mounted on a dark wooden sporting half stock, of typical European form and with European style checkering but with a floral carving on the forestock that is decisively Indonesian, possibly Balinese.

On the base of the bolt handle is the number 1810. It is a bit awkwardly done, most likely by someone not familiar with the numerals. Puzzling, because the technology was not around until the late 1860s.

Several parts of the gun are marked with tiny stamps:

"NH" or "HN" with a W shaped logo appear on the trigger spring.

"S" with a crown on the other side of the trigger spring.

"S" with a crown on the bottom tail end of the receiver.*

"S" with a crown on the trigger place at the bottom of the stock.

"H" inside an oval on the inside of the separate part of the bolt handle.*

"R" on the base of the connected part of the bolt handle.*

"H" on the slider connected to the bolt handle.*

"F" inside a circle on the back of the receiver.

"5" on the left side of the base of the trigger.

"C" with a crown and the number 497 on the right side of the base of the trigger.

Two unintelligible shallow stamps on the back of the bolt handle. One may be a "J".

* The parts marked with * exhibit silvery layers on the blackened surface that remind of pamor running through. The effect is more subtle than on the barrel but present.

Upon disassembly, the pamor is also vaguely seen on the case of the receiver, suggesting that the entire barrel and receiver are locally made using Beaumont technology. Some of the parts however are proofed in the Netherlands. 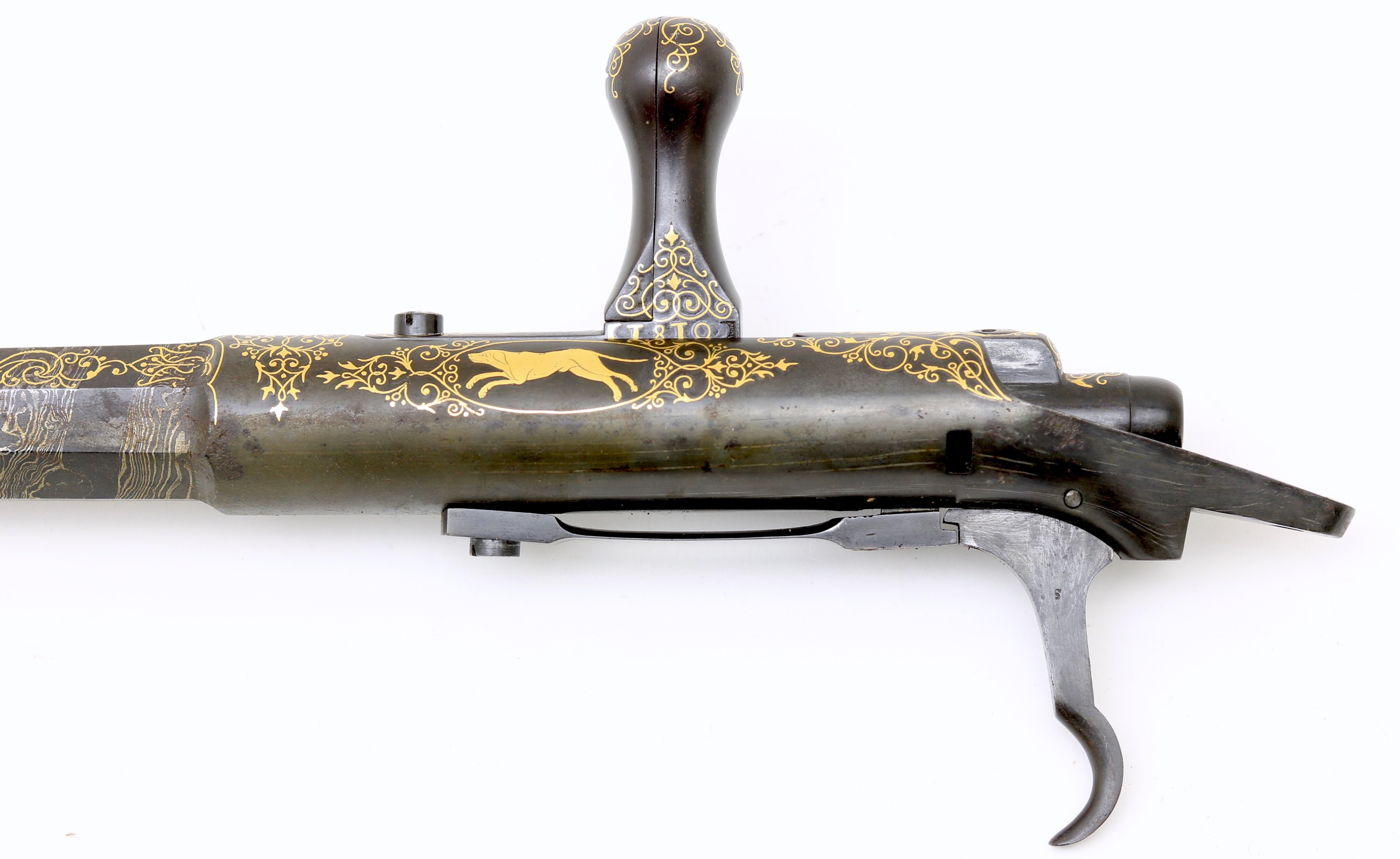 Gun partially disassembled showing some of the pamor running all the way to the back of the receiver.

We know of one place where -among others- variations of firearms produced based on De Beaumont's technology. De Geweermakersschool (GS) or "Gun maker's school" located in Meester Cornelis, a suburb of the then capital of the Dutch East Indies, Batavia. (Now Jakarta.) It was a small production, only a few dozen firearms were produced annually as a test of the student's skill.

This school was lead from 1866 by captain F. W. H. Kühn who was very interested in firearms and designed his own improvements to military firearms. The Dutch Army Museum is in the possession of two gun cases with guns and parts, each including a firearm that was based on the Beaumont system, that were produced in this school under his supervision. They are to be found under accession numbers 013544 and 005271. They were intended for the international colonial and export exposition in Amsterdam that ran from May to October 1883.

This particular gun is quite unique in the fact that it has a barrel with typical Indonesian pamor, combined with lavish decoration in inlaid gold that exhibits a mix of European and Indonesian tastes. The high contrast pattern on the barrel and some details of the decoration seem to point towards a Balinese influence.

"The Balinese blacksmiths are also able to make gun barrels, and even rifles, but for the locks they are indebted to the Chinese, who import them from Java."

A very unusual and probably unique hunting gun that was made blending Dutch technology with Indonesian style pattern welding, finished with golden inlays that exhibit a mix of Dutch and Indonesian tastes.

It was probably a one-off, perhaps produced on special consignment for someone, or perhaps as a showcase of the combined skill of the Dutch and Balinese trained artisans. 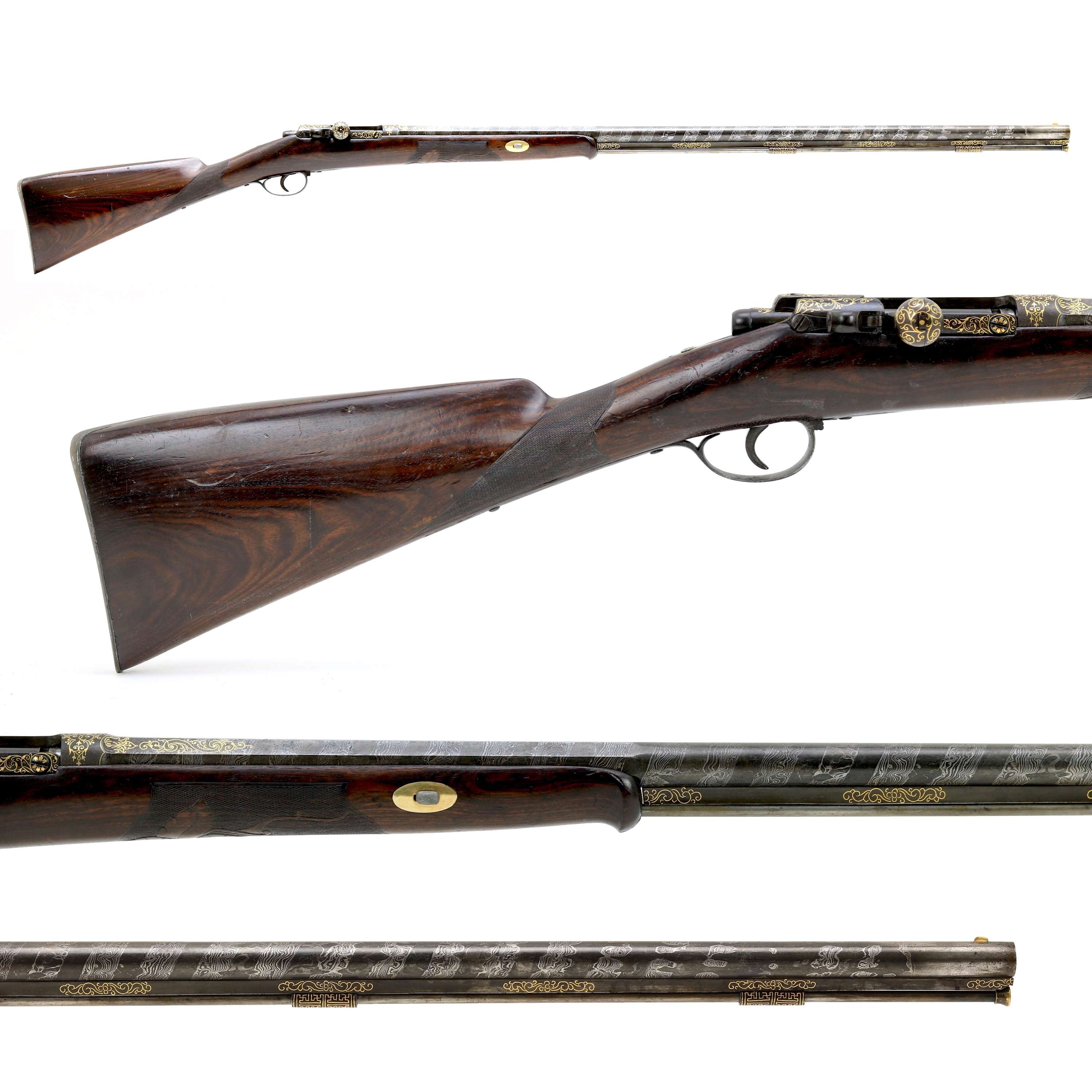 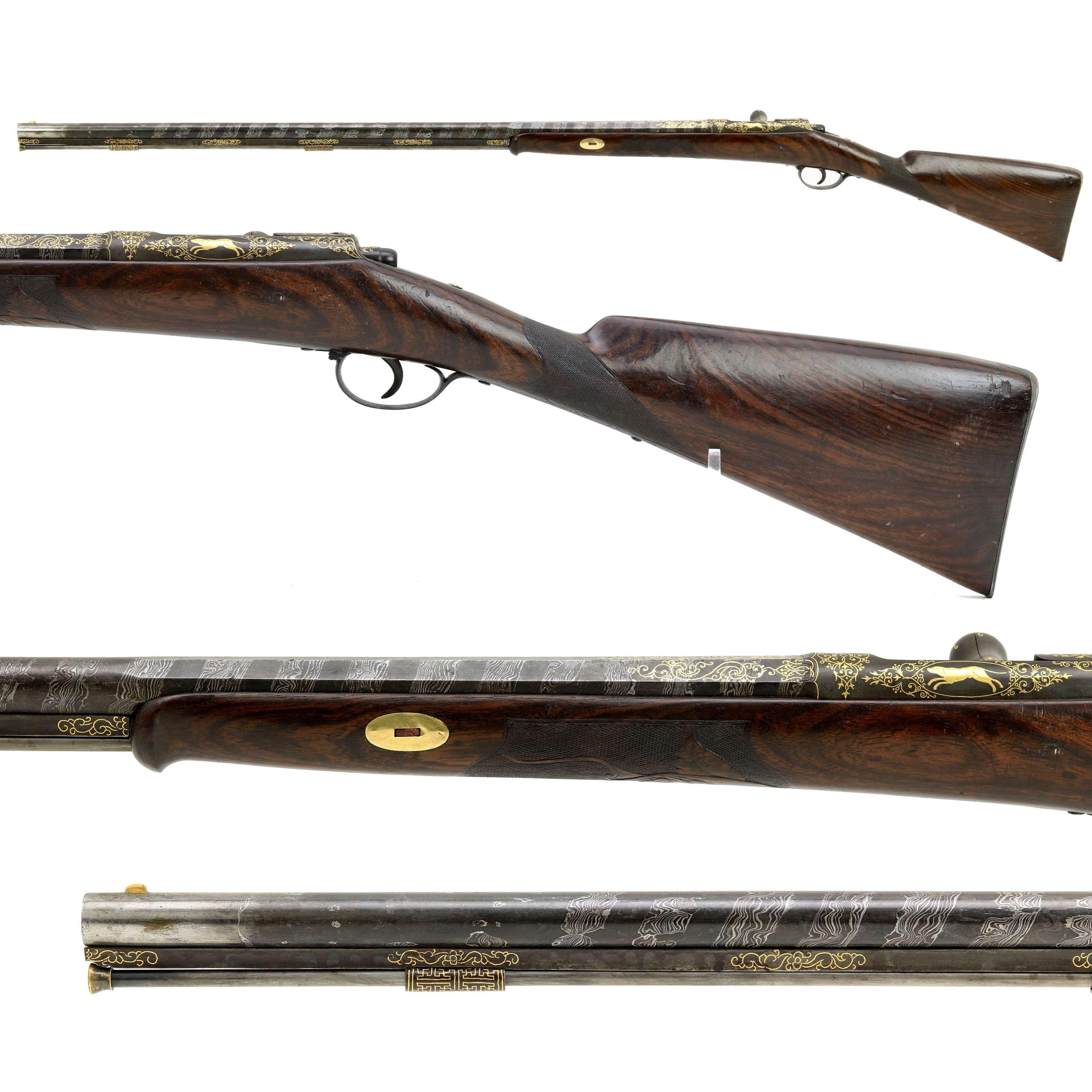 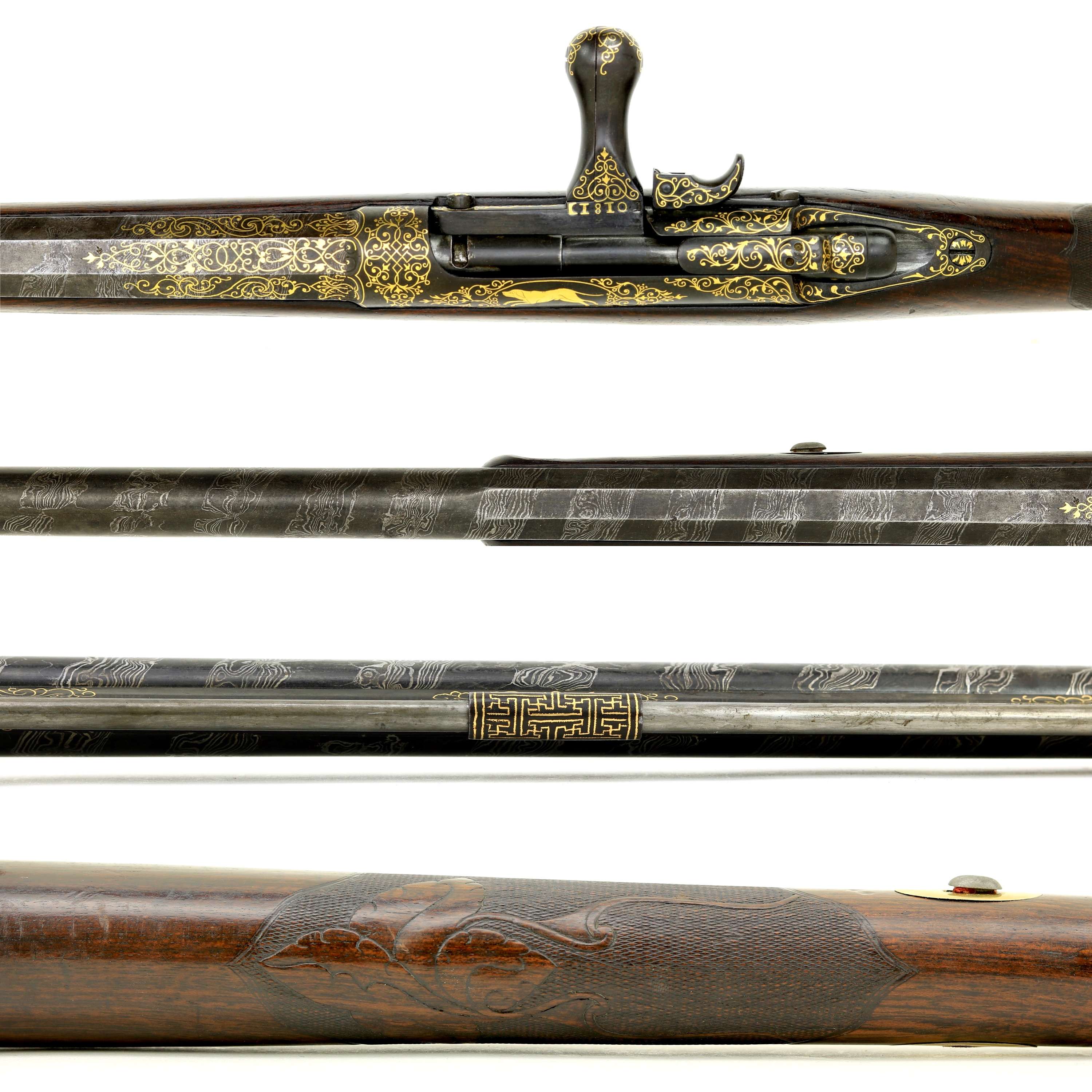 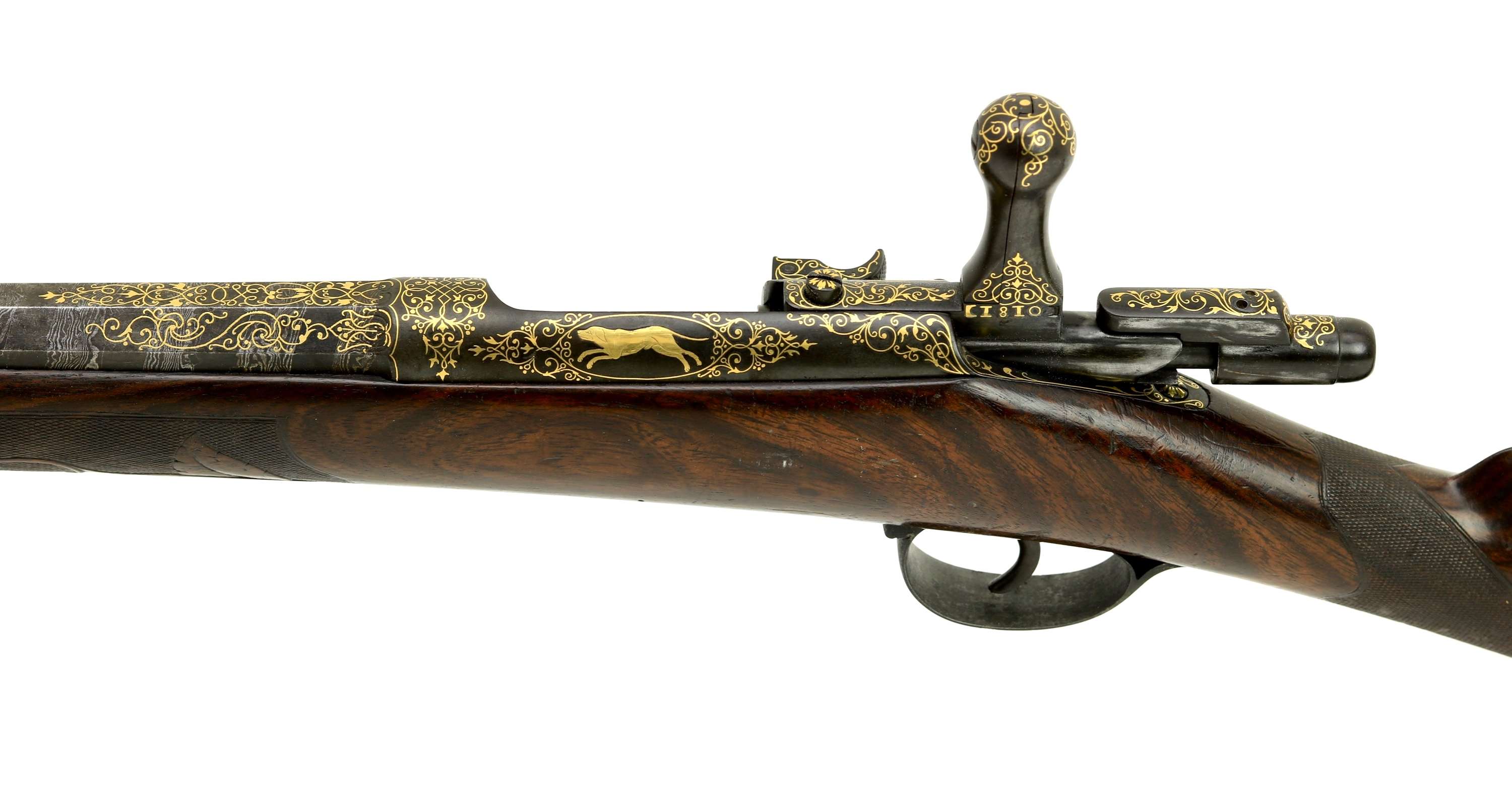 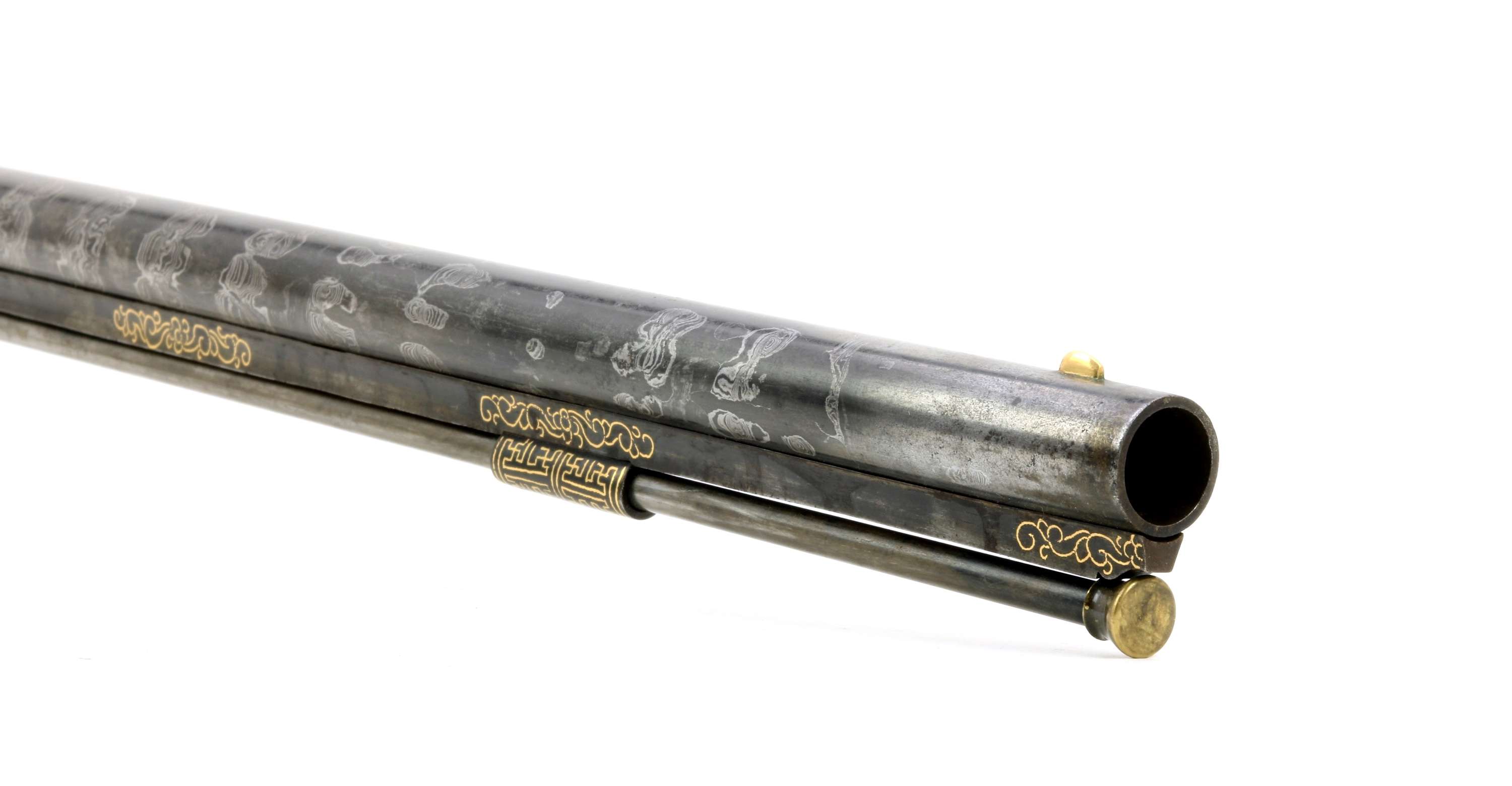 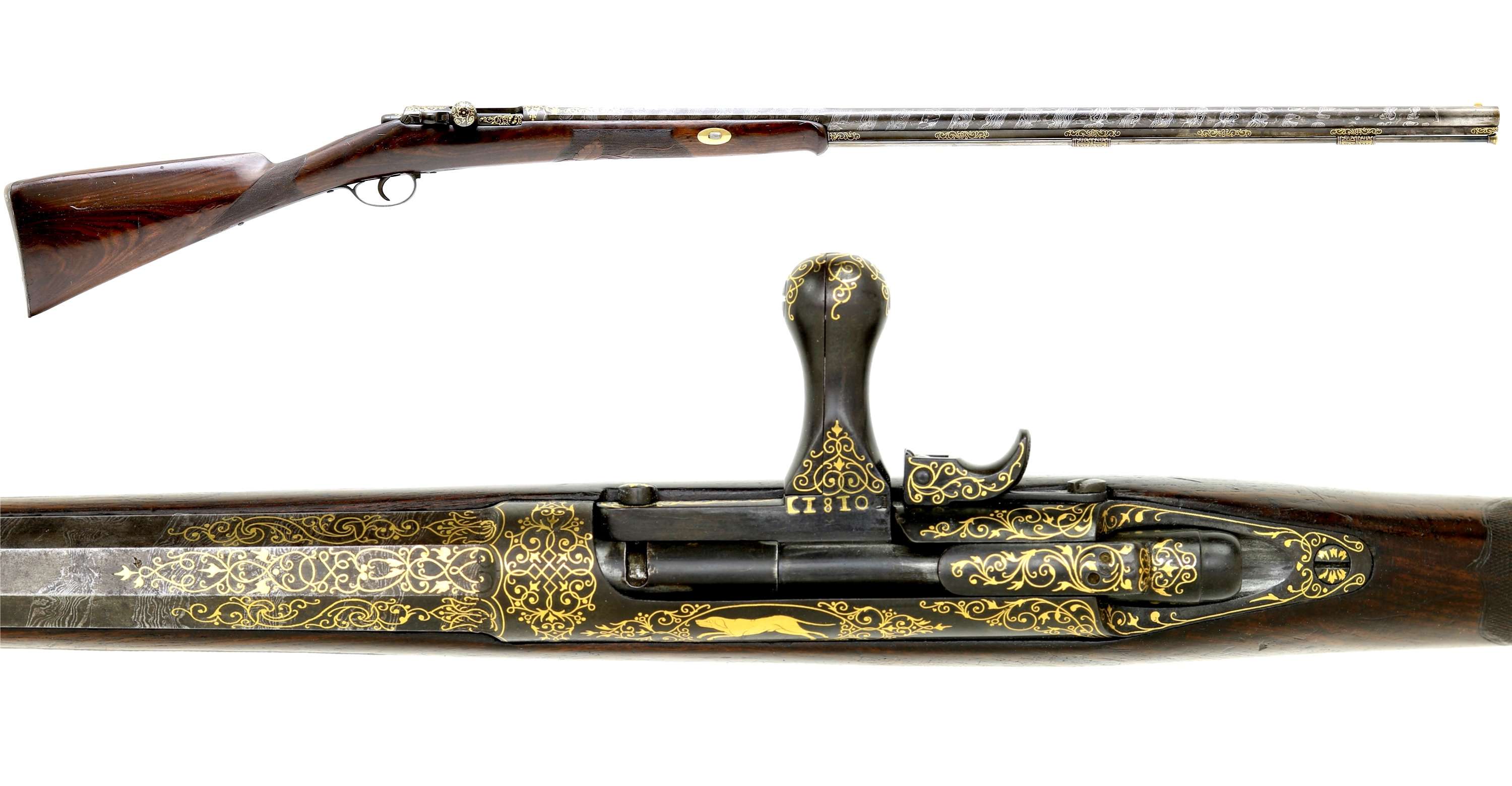 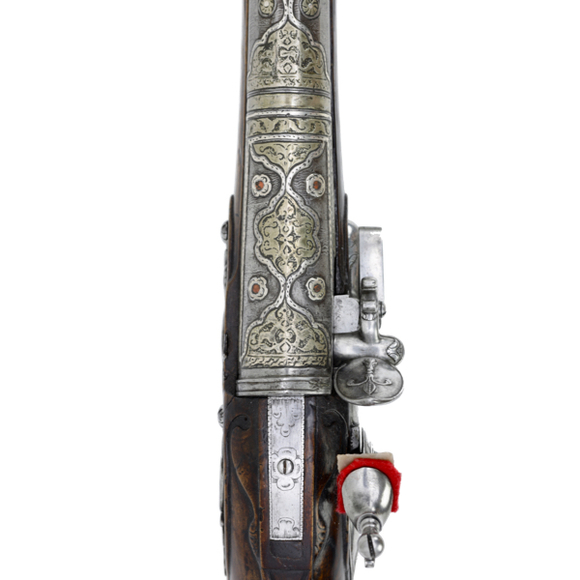