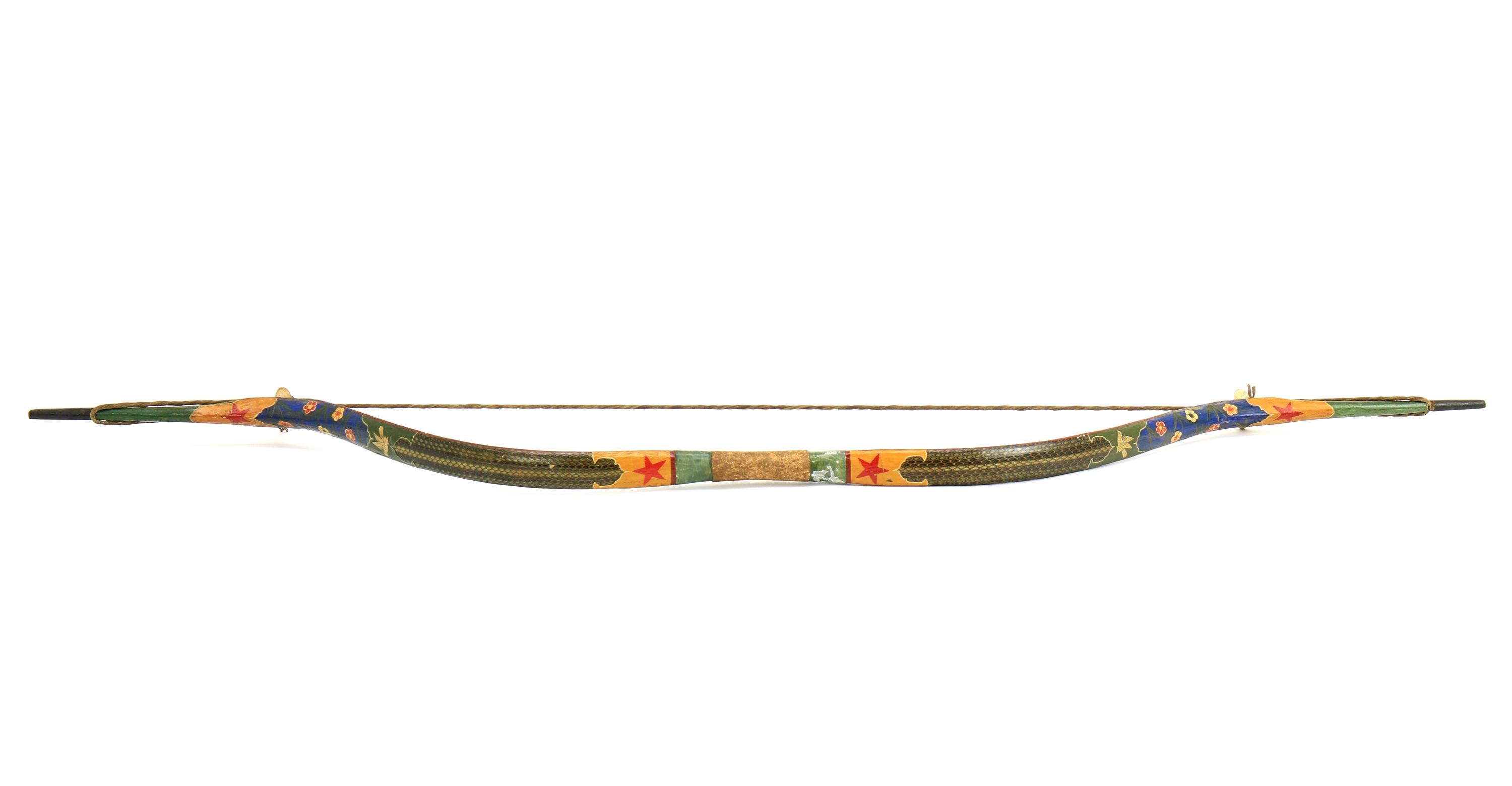 Jù Yuán Hào (聚元號) is a famous bow making workshop in Beijing. Founded in 1720, it changed hands to the Yáng family when Yáng Ruìlín (杨瑞林), a Manchu of the Blue Banner, purchased it from its previous owner in 1910.

Originally there were about 40 bowyers in Beijing but by the late 19th century only 17 were left. By the beginning of the Republican Period, only 7 were left including Jù Yuán Hào and by 1960, they were the very last that was still in operation. At that time, olympic archery had superseded traditional Chinese archery in China and they were mainly catering to outer Mongolia and Qinghai where traditional bows were still in use. 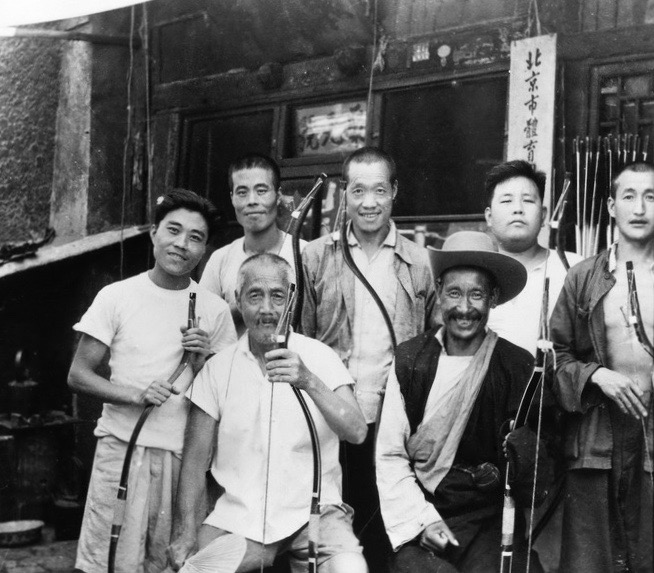 Jù Yuán Hào in 1957.
Yáng Ruìlín (杨瑞林) is in the front, left.
His son and successor Yáng Wéntōng (杨文通) behind him, left.
The rest appear customers from Qinghai (with hat) and Mongolia.

The shop was closed down and its inventory burned by Red Guards in 1966. In 1998, after a hiatus of 32 years, Yáng Fúxǐ (杨福喜) reinstated the brand and is still making bows today. The shop gained international fame after being the subject of a number of documentaries and articles in international media.

A rare example of an extant work by Jù Yuán Hào (聚元號). It is a traditionally made composite bow using horn and sinew glued to a wood and bamboo core. The back is covered with bark and snake-skin, the bark painted and decorated with designs of flowers, doves and red stars.

The bow still retains its original gut string and is in healthy enough shape to be strung and unstrung. There is however a twist in one of the limbs and when strung it is ever so slightly out of balance. It's something I can fix with the application of heat, but on old bows such straightening is never completely without risk I decided to leave it "as is" out of respect for this old bow.

The bow has fairly relaxed ear angles and long, straight ears; a design optimized for use as a sports bow for for example the Nadaam Festivals in Monglia. By the 1950s, the bulk of Jù Yuán Hào bows were indeed aimed towards this market.1

The red stars indicate that it is made at least after October 1949, the start of China's Communist Era. The shop seized production in 1966 and so we have a just over 16 year window in which the bow was probably made. During this period, 9th generation Jù Yuán Hào bowyer Yáng Wéntōng (杨文通) who lived from 1928-2006 was the main bowyer and the bow is most likely by his hand. 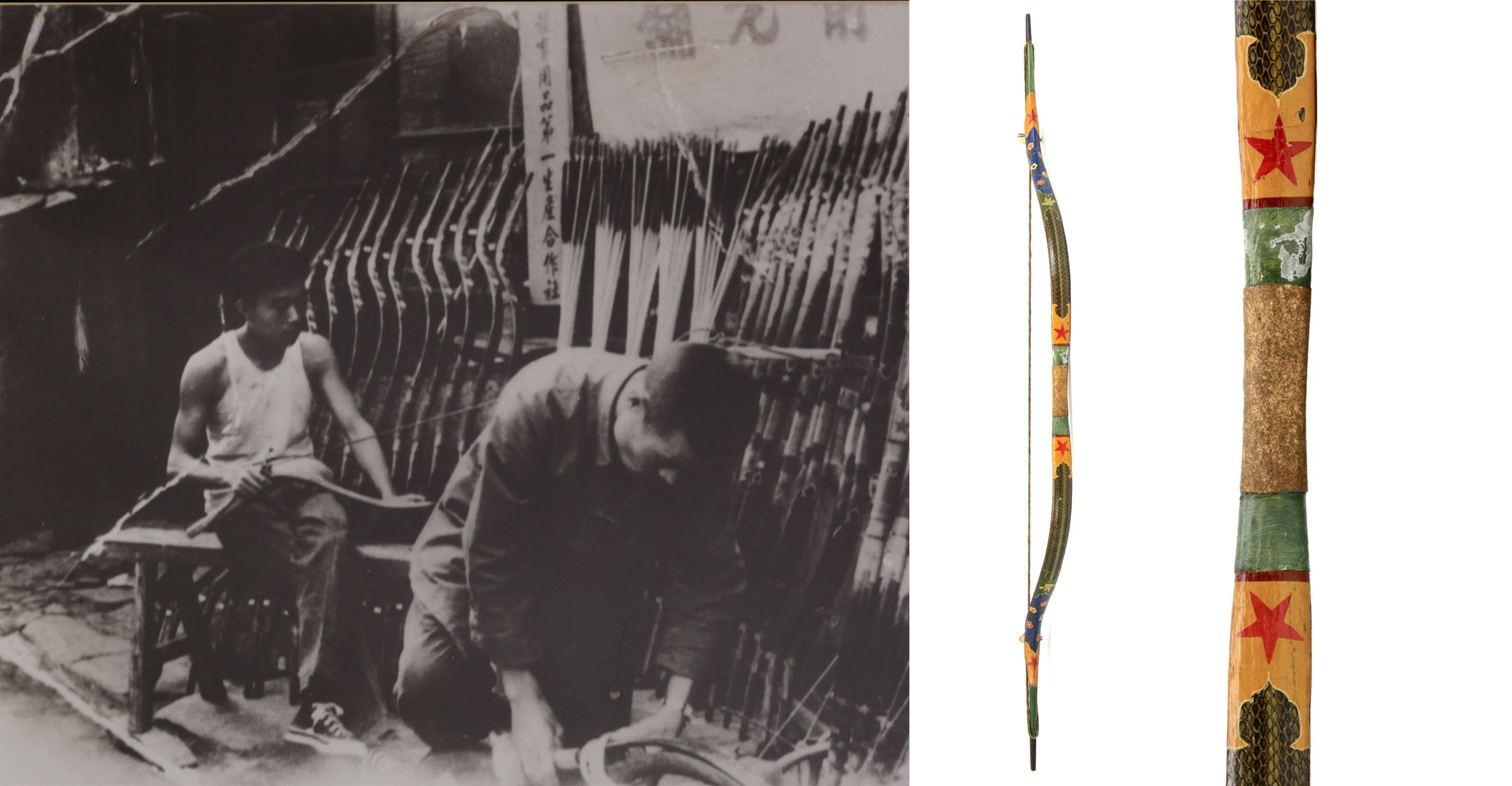 Confirmation of this theory comes from an extant bow, once in the famous Charles E. Grayson collection, now in the University of Missouri collection cat. No. 1994-0668 can be accessed under the same reference number in their database.

Grayson's records describe it as being made by Yáng Wéntōng in the 1950s, and also that it was used in a Mongolian archery festival in the 1960s prior to him purchasing it. The bow is 168.9 cm long, 3.5 cm wide at midlimb, and 1.3 cm thick at midlimb.2

Another similar bow was described by Jack Farrell, and yet another is in the GRASSI Museum für Völkerkunde.3

There is also a photograph from 1961 by Werner Hartwig in the GRASSI Museum für Völkerkunde that depicts an archer in Ulaanbaatar that seems to be shooting a rather similar Jù Yuán Hào bow.

The bow comes complete with four old arrows. The wooden shafts are wrapped front with a red and yellow spiral wrap, similar to that seen on photographs made in the bowyer's quarters in 1935. The self nocks are painted green. Three retain their iron tips, with remains of silver paint.

This bow is a piece of Chinese archery history. The style and workmanship helps us attribute it to the period between 1950 and 1966 and determine it was made by the hand of Yáng Wéntōng who lived from 1928 to 2006. Very of these survive in collections worldwide, let alone complete with original string and in near excellent condition.

A last note to potential buyers
I get this question every time I put an old bow up for sale: "Can I still use it?". As an archer, I truly understand the desire to shoot an old bow, especially one by a notable maker, but I would strongly advise against it. Over the years, the wooden ears may have been subject to excessive drying, making them more brittle. Many collectors who tried have noticed they can snap without warning, and each time this happens another bow is reduced to scrap. This bow is now a historical relic, and being able to afford it does not mean it's ethical to jeapardize its chance of survival to a next generation of collectors. 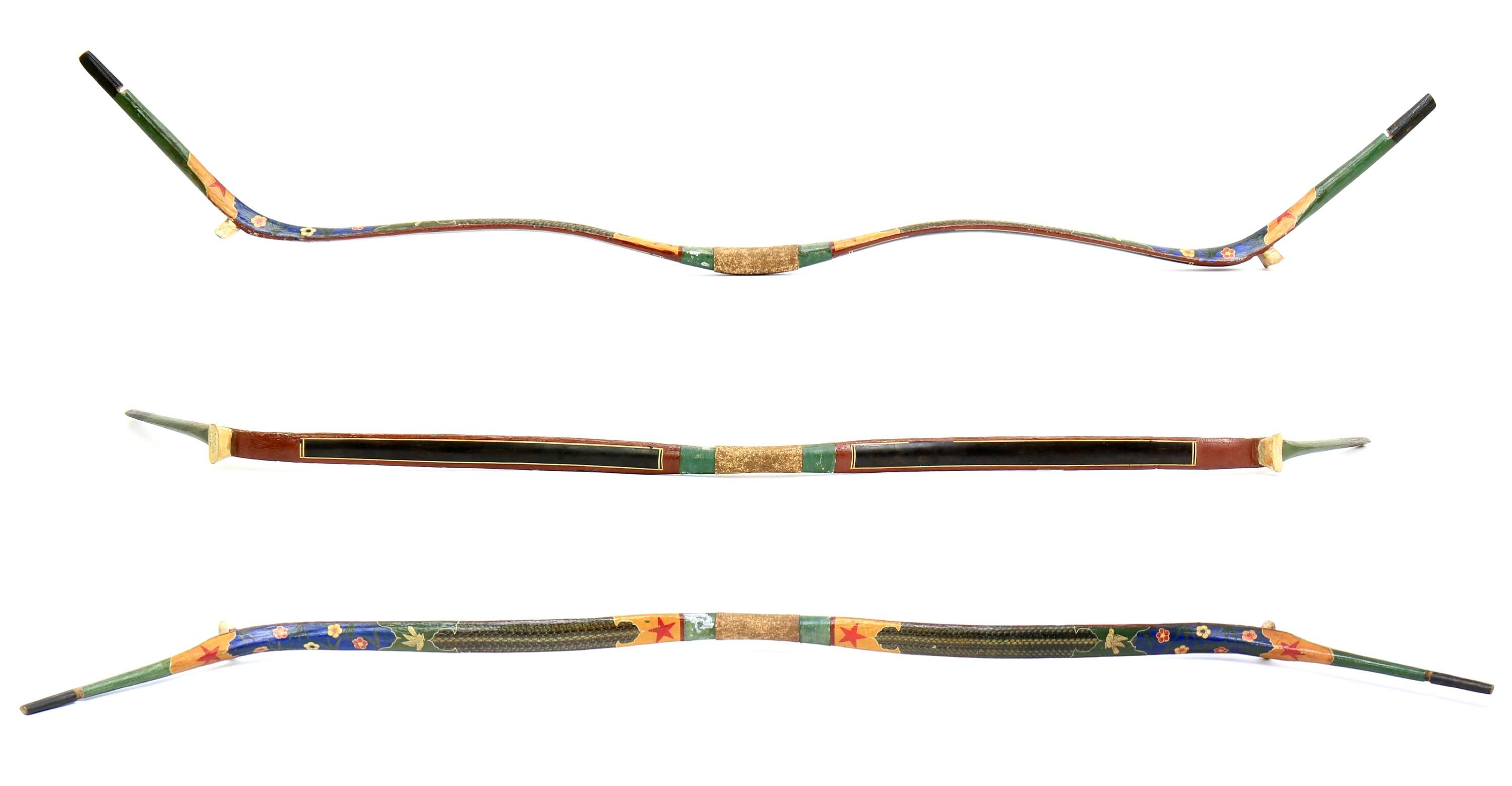 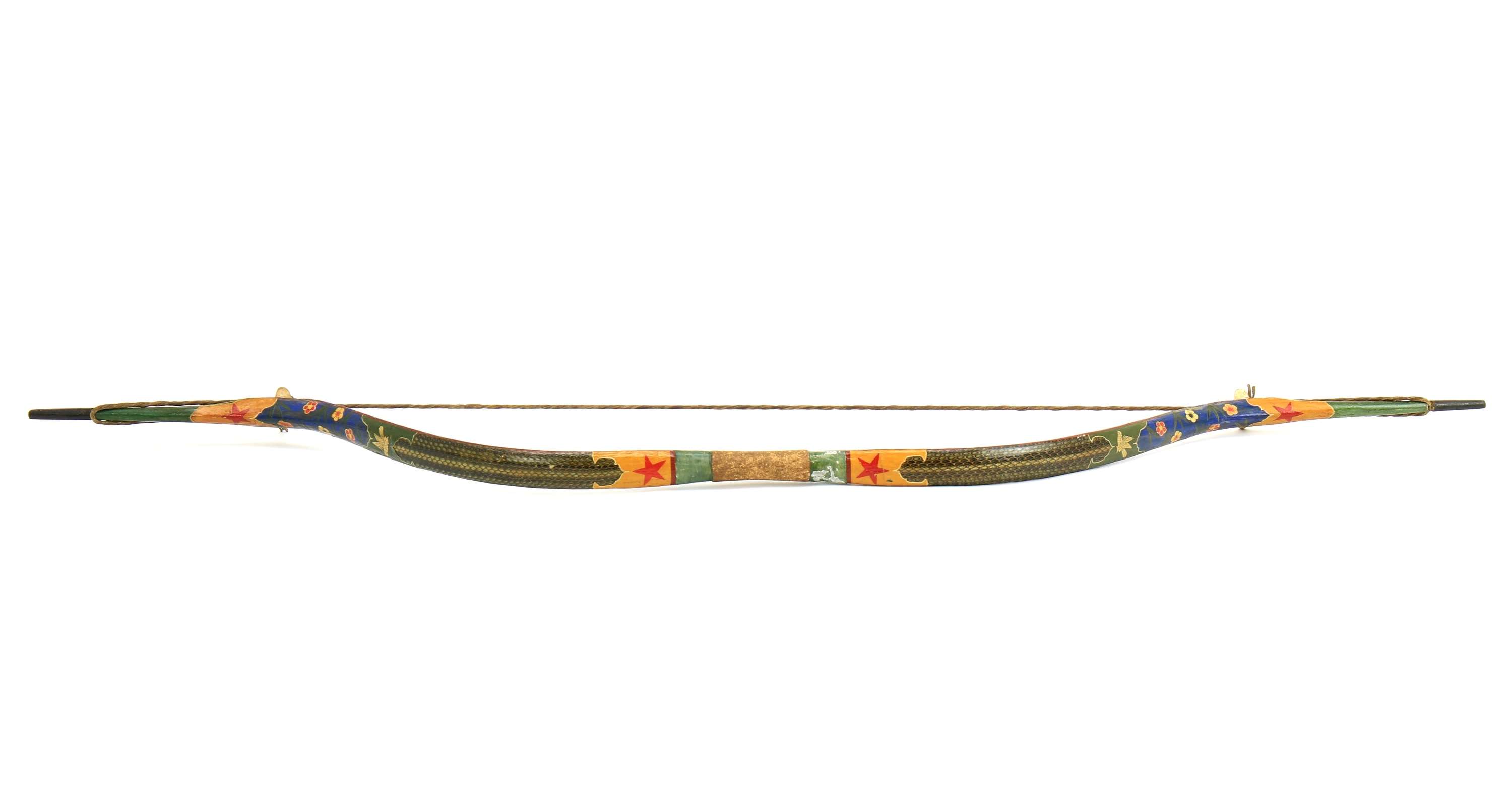