On weight and balance

In researching antique arms -or any kind of material culture for that matter- it is of paramount importance to actually feel and handle pieces. In conversations with martial artists, I've noticed that many conclusions are being drawn from only looking at photos, resulting in errors becoming widespread.

Let's cover two things one doesn't generally pick up from a photo; weight, and balance. I use Chinese swords as examples because most of these discussions concern Chinese swords, but the general principles apply to all swords.

One of the obvious misconceptions that are commonly floating around is that wider blades contain more steel and are thus heavier. People assume dàdāo (大刀) or niúwěidāo (牛尾刀) must be considerably heavier than slender military liǔyèdāo (柳葉刀), for example.

Most recently, someone sent me a youtube video where a Wing Chun instructor discusses the pros and cons of the narrow "stabbing" variety with the wide "chopping" variety of húdiédāo (蝴蝶刀) (a.k.a. wu dip dou, a.k.a. bat jam do / bāzhǎndāo). His main points;

This was based on comparing pieces side-by-side, looking at their profiles. Here's a photo with an example of each variety:

So the top one is considerably lighter. Sounds like a reasonable conclusion, right? Well, no.

A profile picture only presents part of the information needed.

Our world is 3D, the profile gives us length and width, but not thickness. With many people only studying photos without handling pieces, and most photos being made in profile, blade thickness and tapering have become one of the most underrated aspects of sword design.

Let's look at the same pieces, photographed from the spine:

This photo shows just how substantial the narrow variety is.

What is notable is that the wider one is still heavier than the narrow one, but not by much. Also, notice how the point of balance is much more forward on the narrow piece. We will get to balance later.

Now, this piece is not the odd one out, in fact, it is quite light for a narrow húdiédāo.

Some more sets that passed through my hands in recent years help illustrate that narrow doesn't necessarily mean light.

Which one is heavier? By now you will know that this may be a trick question. And it is. 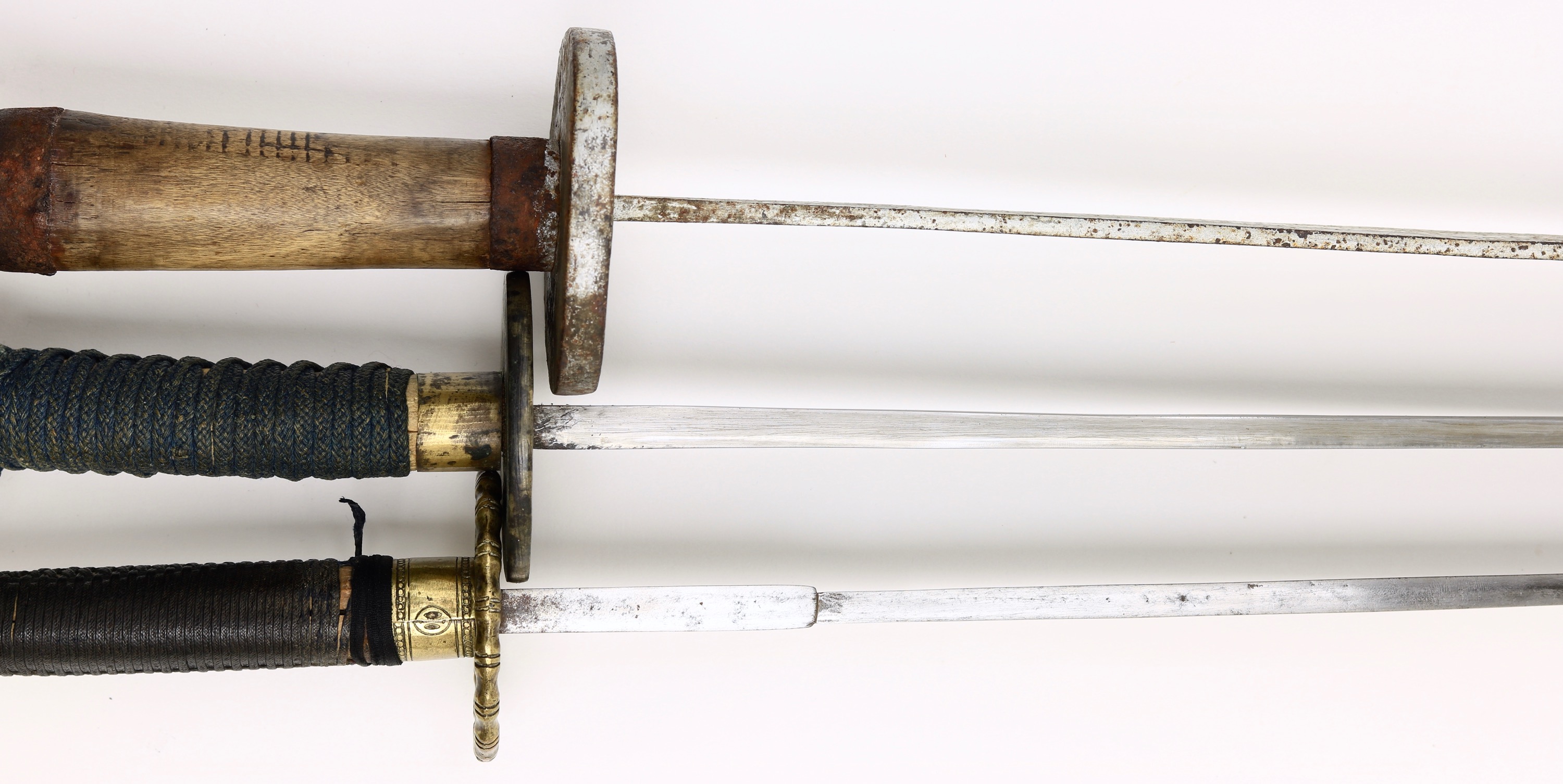 When the Chinese niúwěidāo and dàdāo are discussed, people sometimes assume it had more steel near the tip and therefore had a very forward balance. This may indeed seem so from photos, but quite the opposite is true.

Below are sets of measurements of two dàdāo:

You can see that the taper in width on both pieces is far more dramatic than the widening, so they don't actually have that much weight in their tips. The widening of the tip is achieved primarily by hammering that area flatter, not by adding additional material. The same goes for niúwěidāo. As a result, they handle a lot more lively than they look.

Let's look at the "why" of the numbers mentioned above. I often notice that people mistake an easy balance for a good balance. They are not necessarily the same thing. If easy was always good, hammers and axes would have been balanced a lot closer to the hand.

Generally speaking, a balance closer to the hilt makes it easier to point at something or change direction, and as such is seen to the extreme in dueling rapiers and smallswords. A balance further out improves the force with which the sword hits.

The balance of a piece is thus dictated by its intended purpose. Many Asian cavalry sabers have balances that can be 20 cm from the hilt. Their purpose is not nimble dueling, it's heavy-hitting. A sword tip at full stroke goes about 14km/h. A warhorse can get up to speeds of 50km/h, but typically would charge at about 20km/h. That means a cavalry saber cut can hit with more than double the normal impact, and it will pack more punch even when the blade is heavier and more forward balanced. So they were.

Most swords developed for infantry use often held a balance between being nimble enough for general fighting while having enough weight to do damage. It also mattered a lot what the opponent was likely wearing; you can't cut through mail but a heavy sword may damage the tissue or even break the bones under it.

The Chinese niúwěidāo and later dàdāo were both developed with a wide but thin tip with an accelerated curve that was very good at cutting through the layers of thick padded clothing worn in the north during wintertime where temperatures could reach -30 centigrade. Narrower blades remained popular in the hot and humid south where cutting ability was less important, as few layers were worn, so the swords could be made capable to thrust better.

It's not just important where the piece balances, it is also important how balance is achieved. Here's a diagram I made that helps explain that aspect: 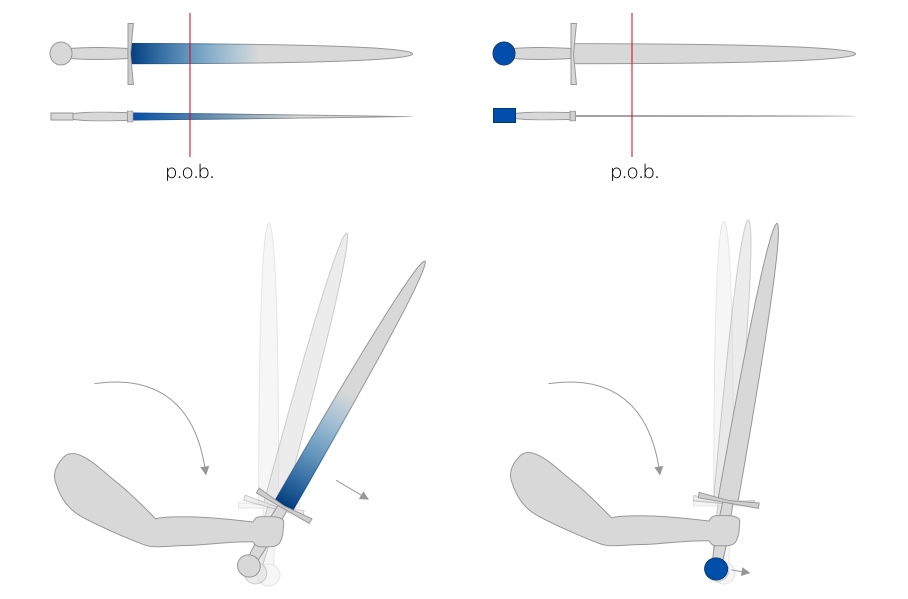 Both swords can be made with exactly the same weight and point of balance, but the sword on the left achieves the balance with a very thick base of the blade, while the second sword has a thinner blade that balances mostly with a heavy pommel. Because of where we grip the sword, both these pieces will handle very differently.

Most Asian swords got their balance almost entirely from smart tapering in their blades, like the example on the left, with often light and hollow sheet metal fittings. The result is a sword that when held, has more weight above the hand, giving the wielder striking power.

Balancing a sword for a large part through a heavy pommel is usually a design flaw, as it detracts from its striking power. Unless the intended purpose of the sword is very much thrust-oriented, like a smallsword.

So why were these two types of húdiédāo made the way they were? Remember the statements made in the youtube video:

The "stabbers" with their narrow blades are indeed much better suited for the thrust. They are, however, not bad cutters. For one, they do not by definition lack heft. Second, their blades are generally more forward balanced and their edges have more of a wedge-shaped, ax-like cross-section, giving strength to the edge. They were designed to strike harder, and carry a much stronger edge that is less likely to damage in contact with protection or other weapons.

The "choppers" are indeed good for chopping. Some are hefty but in general, they are lighter than most narrow húdiédāo, not heavier. They are indeed not very well suited for stabbing, although at arms fairs when I ask "can I poke you with it, then" the answer is always a firm "no". So yes, not well suited, but not wholly incapable either.

The thin but wide blade design makes the edges fragile, but potentially sharper and with less resistance because the blades are thin. This makes them optimal for softer targets, like layers of clothing. The balance a little closer to the hilt also gives them a little less percussive force, providing the ability of quicker but shallower cuts.

The long narrow húdiédāo were primarily used by the Qing military. These were people equipped to kill other professional soldiers or rebel armies. Their opponents were known to often wear some sort of protection in the form of paper armor, leather armor, or the rattan cuirasses that were worn in the south of China. Weapons they were up against may include rattan shields, larger sabers, spears, and rifles fitted with bayonets.

The wide variety was most popular among martial artists who sometimes served as guards, and triads, people who could get into a lot of trouble when they killed. Their opponents were dressed primarily in civilian dress, the weapons they faced primarily short weapons like knives.

So among húdiédāo, to me the distinction between "stabbers" or "choppers" doesn't quite cut it, pun intended. There is a long and heavy variety, and there is a generally shorter and wider variety. Both were made for different roles.

It's not a coincidence that the wide variety is still in use, while the long narrow variety fell out of use when the Chinese armies started to switch almost entirely to modern equipped armies with firearms.

There is a lot to say about weight and balance, and we haven't even gotten into blade geometry yet!

Any field of study is about connecting the dots. The more dots one has, the more clear a picture one can draw.

So when discussing weights, balance, and intended purposes, be sure to collect all the dots that are available. For this purpose, I list detailed measurements including weights, tapering, and points of balance of my swords so they can still help enthusiasts conduct their research long after they are sold.

Thanks for bearing with me through a rather lengthy post!

This article contained quite a few Chinese terms.
Did you see any weird terms you did not understand? Look them up in the Glossary!