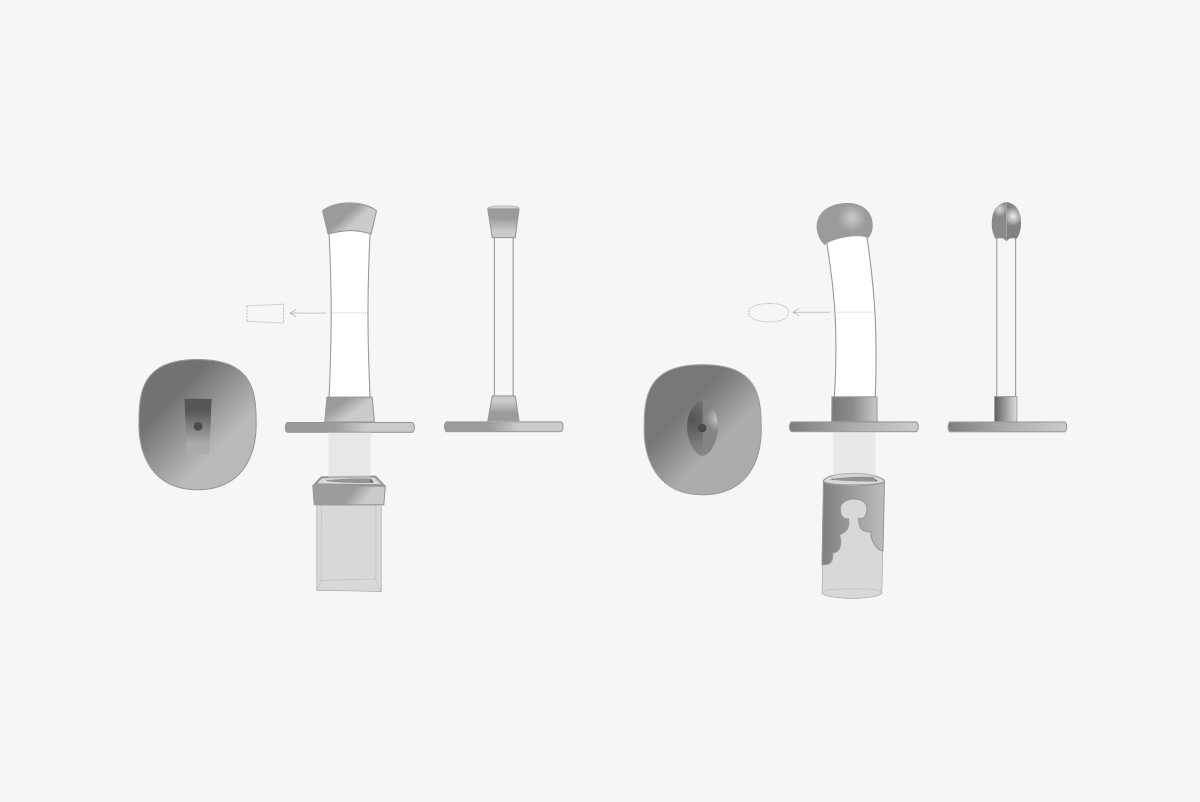 Among sabers of the Qing dynasty, we encounter two basic types of mountings:

Alternatively, these are called fāngzhuāng (方裝) and yuánzhuāng (圓裝) respectively, meaning round or square "dress". All of these terms are today's collector's jargon and although the distinction is seen in artwork and illustrated texts, neither style is mentioned by name in these same texts.

The origins of the fangshi style are unknown, but the style is never seen on Ming artwork and becomes ubiquitous on early to mid Qing artwork. It seems possible that it was introduced -or at the very least widely popularized- by the Qing's founders, the Manchus who invaded from the north in the 17th century.

Classic Qing yuánshì starts to appear in the mid 18th century among in elite Manchu circles of the 18th century. The very first to carry them was the emperor himself, elite soldiers of the jianruiying, and certain ranks of imperial princes.

The topic is a fascinating one, that deserves it's separate article. For this article, it suffices to know that the popularity of yuánshì increased over the course of the late 18th to early 19th centuries, so that by the mid 19th century even standard pattern military sabers were executed in yuánshì. Here is a diagram showing the classic fāngshì and yuánshì styles: 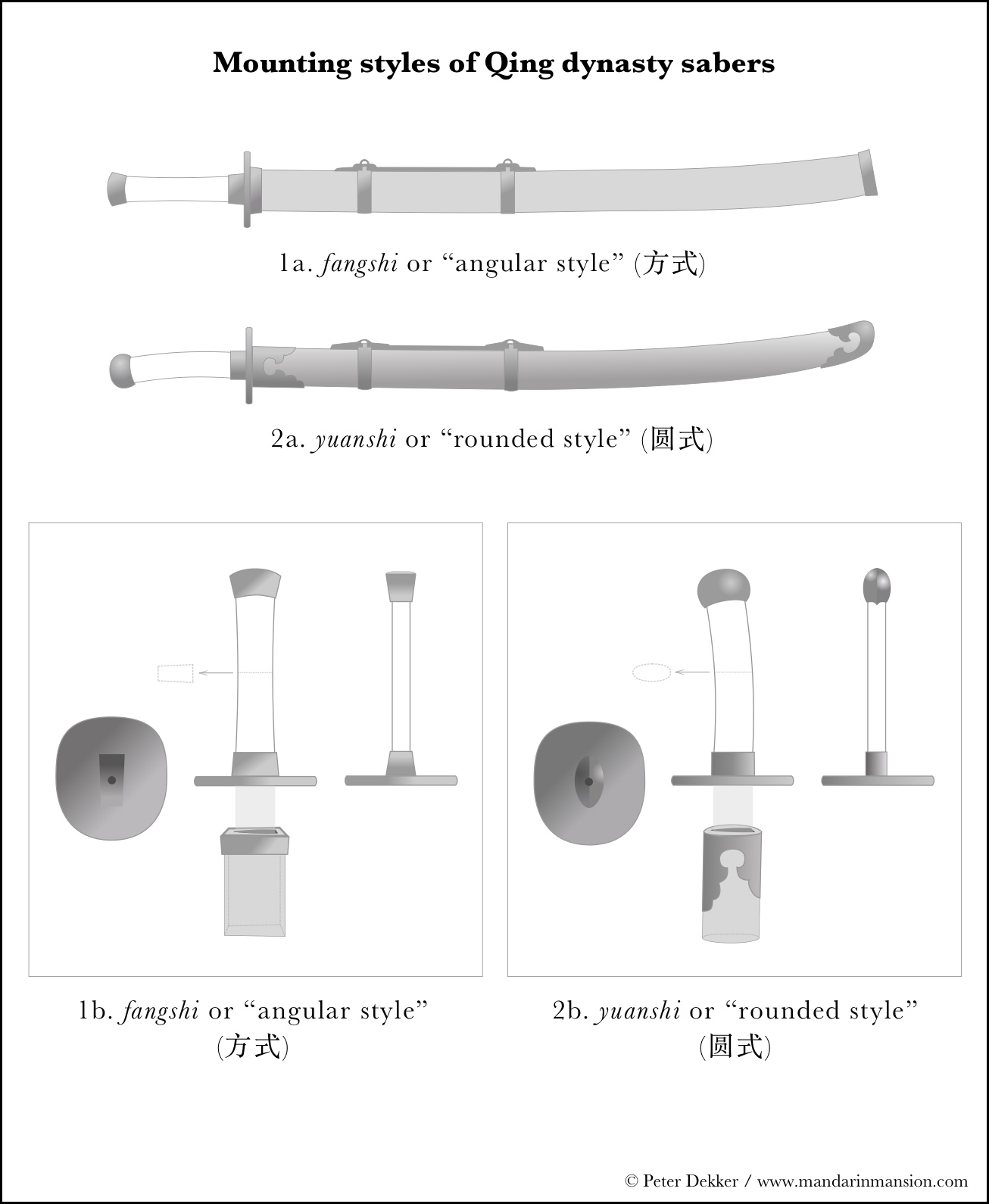 In the fāngshì or "angular style" the hilt and scabbard have an angular cross-section, often slightly wedge-shaped, and usually fairly simple fittings to match. Most fāngshì sabers are iron mounted but brass mounted examples are encountered from time to time. Most fāngshì scabbards were covered with morocco-grained leather in black, green or brown, although lacquered or ray-skin covered scabbards are encountered. Most fāngshì handles were straight, but some were curved.

In the yuánshì or "round style" the hilt and scabbard have a rounded, oval cross-section and matching fittings. The pommel is often in the shape of a flattened tangerine -although other shapes like "horse-hoove" pommels are also encountered- while the scabbard mouth- and endpieces (chape) usually have cutouts of stylized cloud designs, like the ones in my diagram. Most surviving yuánshì scabbards are covered with ray-skin, one late military type always comes with black leather. Other materials and / or colors from time to time. Most yuánshì handles are curved, but some are straight.

While the mounting styles depicted above represent the two most common types of mountings for Qing sabers, there are numerous varieties to these themes. Especially in the late 18th century, a number of transitional configurations were in use that held the middle between classic fāngshì and later yuánshì. Some had hilts and scabbards with rounded cross-sections but with simple mounts that remind strongly of the fāngshì they derived off. 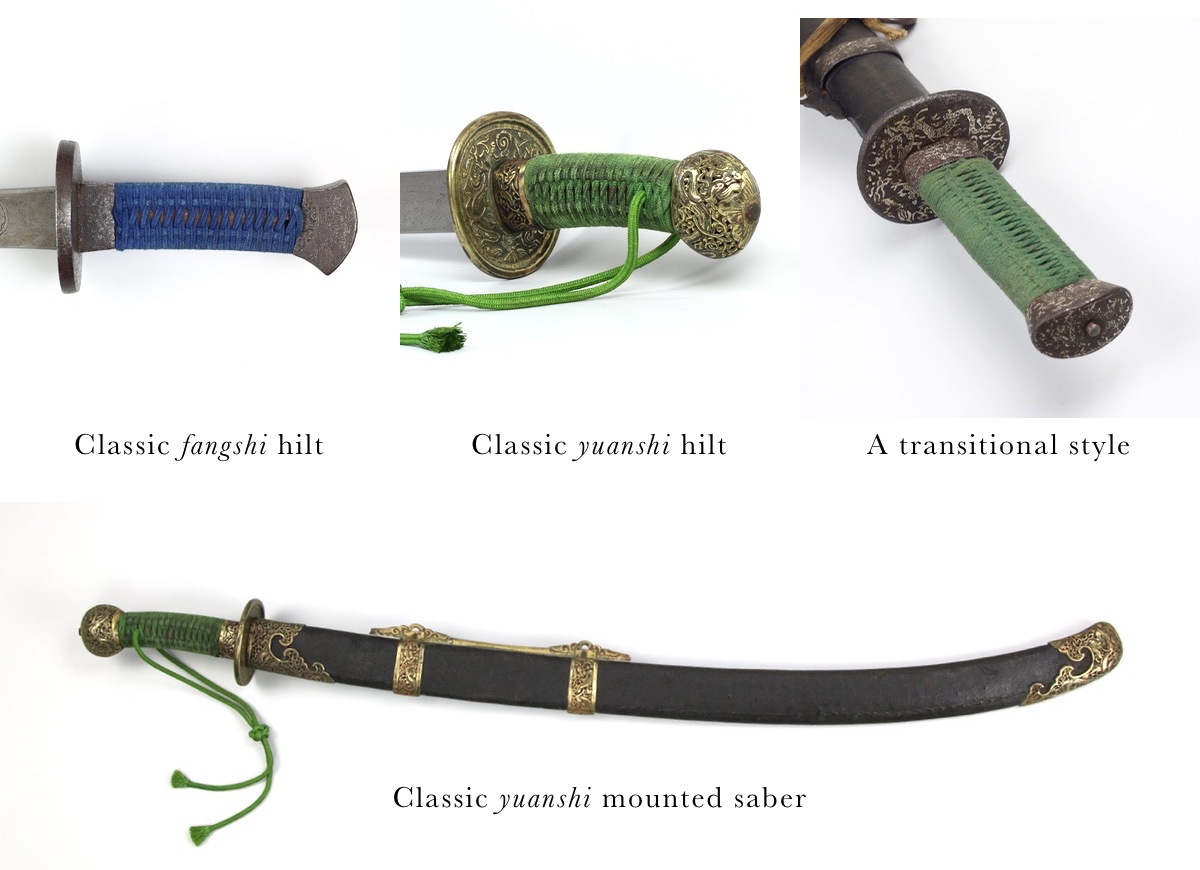 Some more real-life examples. Note the transitional style to the upper right.