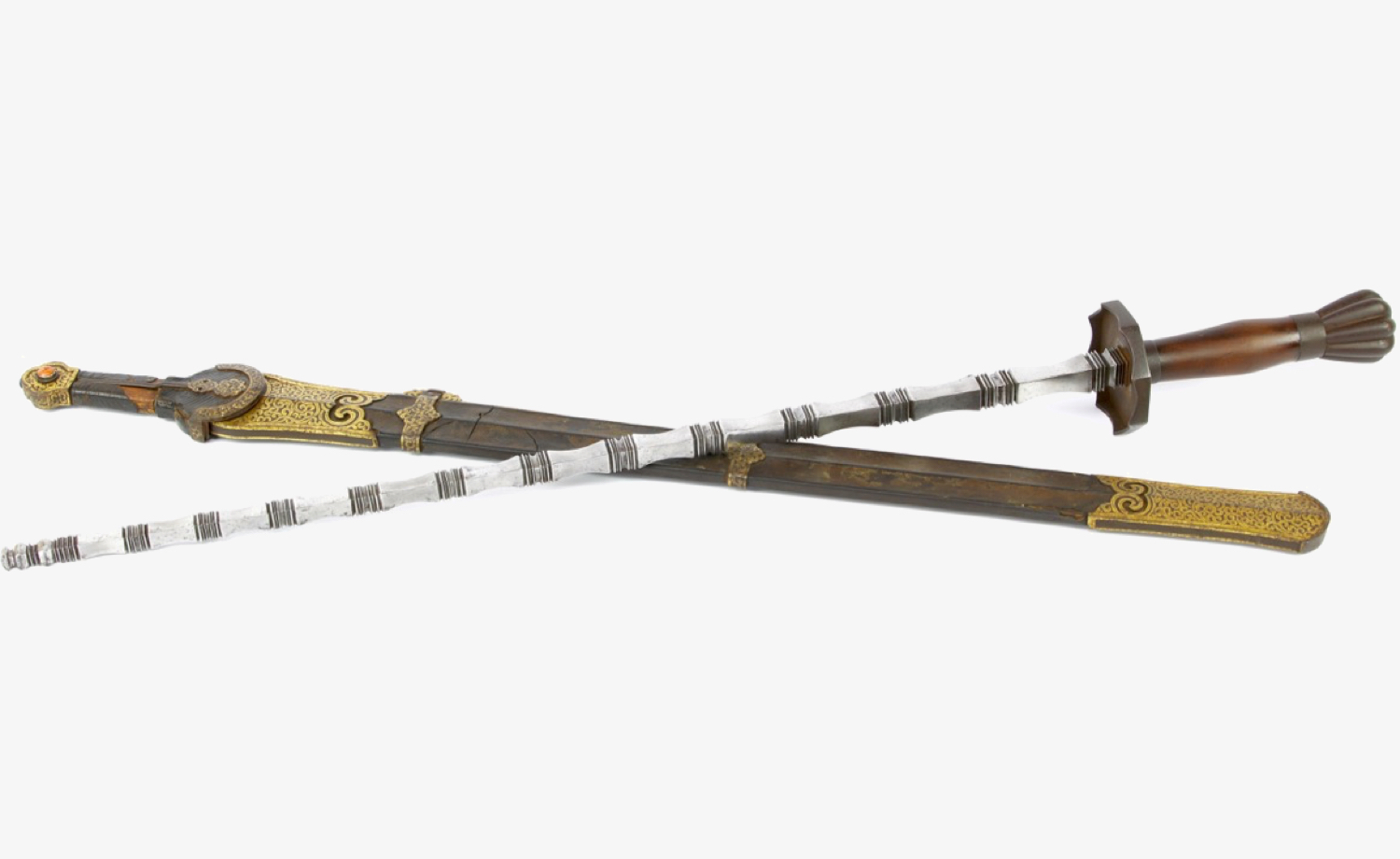 The Jianruiying was an elite division of the Qing dynasty military consisting of crack troops that were specially trained to cross rough terrain and overcome fortifications. In my introduction of the Jianruiying I describe their history.

In this follow-up article, I will cover some of the Jianruiying weapons and equipment.

The Qinding Junqi Zeli or "Regulations and precedents on military equipment" (欽定軍器則例) of the 56th year of the Qianlong reign (1792) covers the construction and maintenance of Jianruiying equipment. 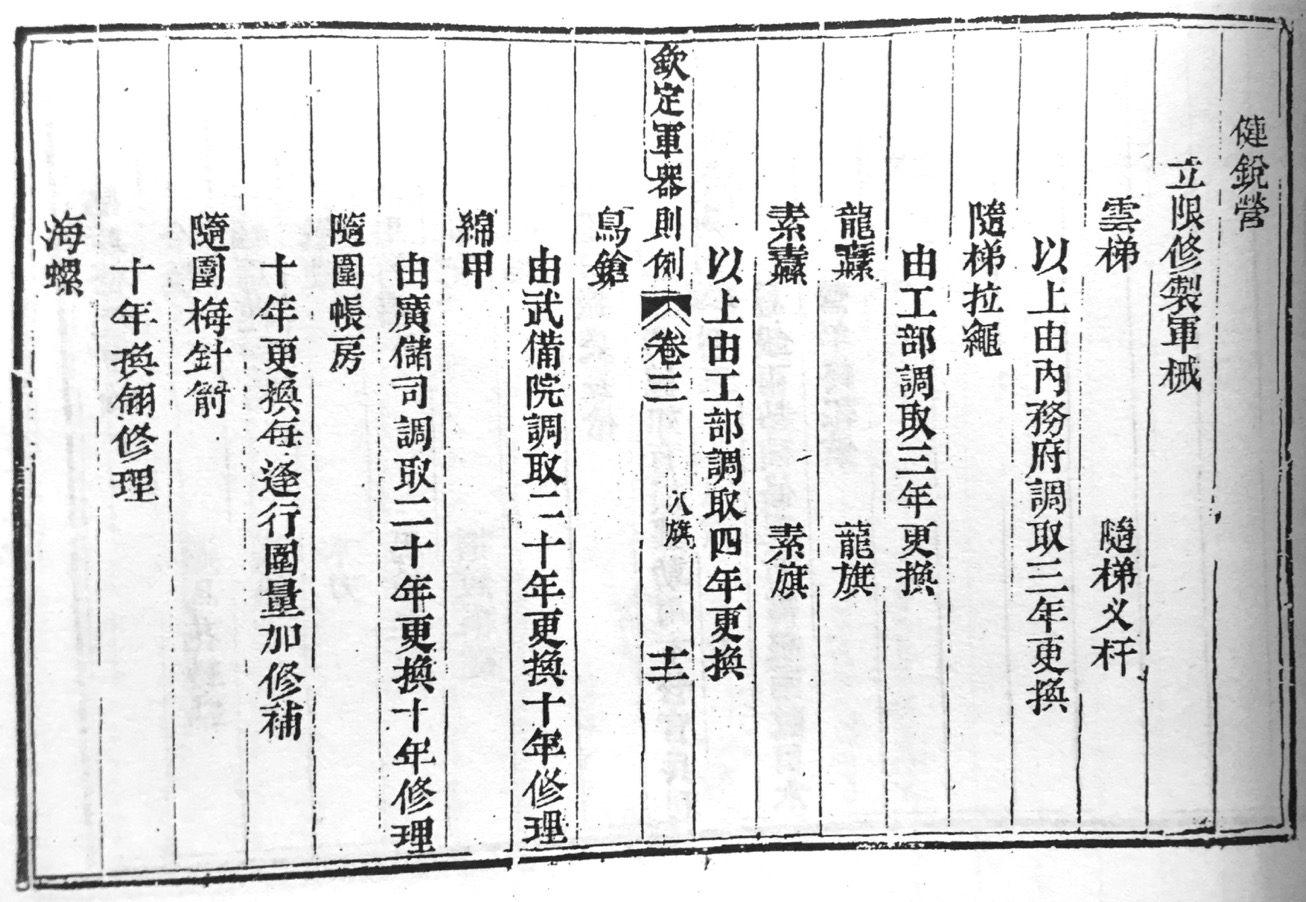 The first page of the Jianruiying equipment regulations of the Qinding Junqi Zeli.

"To be provided and repaired by the state

Equipment to be periodically maintained:

Soldiers prepare for themselves the following equipment:

There are some interesting items in this list. For example, the Jianruiying was apparently issued the more expensive tents similar to that of the imperial guard. The "plum needle arrow" is also a better quality, more expensive type of war arrow. We also see specialized equipment such as maces and cloud ladders that are described in more detail below.

A fascinating item on the list is the mùdāo (木刀), freely translated as "wooden saber" which is probably a practicing saber for fencing. This item seems exclusively listed among jianruiying equipment. Other items such as the "lance stopping shield" all hint towards a greater emphasis of training hand-to-hand combat compared to must units.

Even though the illustrated regulations do not mention helmets, this text does attribute helmets to the Jianruiying officers, of which there must have been only a few hundred at any point in time.

Several sets of Qing dynasty regulations make mention of the special weapons used by the Jianruiying. One of them is the Huangchao Liqi Tushi (皇朝禮器圖式), or "Illustrated Regulations on the Ceremonial Paraphernalia of the Dynasty". This is a 1766 publication based on a 1759 manuscript. According to this text, all designs for Jianruiying equipment were made official in the 14th year of Qianlong, corresponding to 1749 or 1750 depending on the month.

Here the pages that describe the specialized equipment used exclusively by the Jianruiying, followed by my translations: Made of standard wood. Total height is 2 zhang. It has 24 steps and is 1 chi 2 cun wide on top and 2 chi wide at the base. Every second step is wider than the former, protruding on the sides. On either sides of the top are iron wheels connected to the top rung. Two wooden sticks, serving as handles, hook to the top step with iron hooks.”

Two zhang equals closely to seven meters.* The two sticks were meant to push the ladder up against a wall, the wheels helped it roll up. The ropes, on the other hand, served to keep the defenders from pushing the ladder over. A clever design. A cloud ladder, possibly a reproduction, on display at the Jianruiying training grounds museum.

* Sizes were not as standardized as they were today, and the chi ruler had different lengths according to profession, city, or even differed between various guilds within the same profession in the same city. Based on existing examples of Qing military equipment in several Beijing museums I re-calculated the imperial armorer's ruler at about 35cm per chi, which is slightly longer than the generally accepted 32cm conversion. Made of forged iron, the blade is 2 chi 3 cun long. The handle is 3 cun 2 fen long. The fittings are made of brass. The rest is similar to the style of the officer’s peidao.”

The saber is about 91 cm long, converted to my proposed Qing armorer's chi of around 35 cm.

The officer’s peidao that is referred to has a leather covered scabbard, blue wrist lanyard and blue silk handle wrap. The scabbard color is not specified, although on artwork of this period scabbard are almost always green, or sometimes black.

One of the most interesting things about this saber is not mentioned but depicted: The style is yuanshi or round style and represents one of the earliest depictions of this style. The norm at the time were swords with angular cross-section hilts and scabbard, and simple angular fittings en-suite. This round style had scabbards and handles of a round cross-section and customarily came with fittings with stylized cloud designs. Imperial troops were also called "heavenly troops" and their depiction on weapons referred to the troops executing heaven's will. The only other yuanshi style sabers in regulations of the time were reserved for princes.

In the decades to come yuanshi would gradually replace fangshi as the standard military saber. This was probably due to a trickle-down effect, where ordinary soldiers wanted to be like the elite. At the end of the Qing yuanshi sabers were the standard pattern for the rank and file, the angular style all but replaced entirely. Spearhead made of forged iron [as to produce steel], overall 1 zhang 3 cun long. Spearhead is 9 cun long. It has a triangular point with a central ridge. The wooden shaft is 9 chi long and the circumference is 4 cun 6 fen. It has steel edge like a knife inserted in the side, glued into the spear, that is 1 chi 4 cun long and 5 fen wide. Under [the spearhead] are connected two wooden balls with black horse hair. End steel fitting is 4 cun long.

The spear is about 360 cm long, converted to my proposed Qing armorer's chi of around 35 cm.

This spear is an interesting mix of two spears that were already in use by the Qing army: The huqiang (虎槍) or “tiger spear” used by elite Tiger Spear units, and the Green Standard Army’s dingqiang (釘槍) or “nail spear”. The tiger spear is a Manchu hunting spear used for large and dangerous game. It has two crossbars attached by straps of leather, right behind the tip. These bars prevent the animal from getting through the spear and reaching its wielder. The nail spear is a long bamboo spear with a narrow spearhead and a sharp edge glued into the side of the shaft. Ayusi the Valiant with his "nail spear", notice the blade glued into the side of the shaft. A "tiger spear" worn by a member of an imperial hunting party accompanying the Qianlong emperor. Several tiger spears survived, and are now in the collections of the Beijing Military Museum, and the Palace Museums in Beijing and Shenyang.

On the Jianruiying spear these two special features are combined, but the crossbars are replaced with balls. The edge glued into the side of the shaft discourages an opponent from grabbing the shaft and may have allowed for special techniques to deal more damage. The crossbars were probably replaced with balls because human opponents can more easily grab such crossbars in order to gain control over the spear. All in all, a very interesting spear. To my knowledge, no antique specimens have surfaced yet. Made of forged iron. The stave shaped like bamboo sections, 2 chi 3 cun 5 fen long. It’s guard is an iron disc, 1.5 fen thick. Handle is 6 cun long, with a circumference of 3 cun. Made of wood, lacquered black, and with an iron pommel or wrapped with green silk cord. Fittings are damascened in gold.


The bian is about 103 cm long, converted to my proposed Qing armorer's chi of around 35 cm.

These bian are heavy weapons, antique examples often weighing over two kilos, that's twice the weight of a good, heavy military saber of the period. Advantages are that they are very hard to defend against, can destroy edged weapons they hit, and strike armor with enough force to cause severe internal damage. The weight requires considerable strength and stamina to wield them effectively. This is probably why you only see them issued to elite units like the Jianruiying.

An antique fighting bian was sold by Mandarin Mansion in 2018. Of excellent workmanship throughout, this piece has no decoration but solely relies on its geometry for aesthetic appeal. A robust, practical piece with a heavy segmented rod with sharp corners that can "bite" into armor, preventing it to slide off during a hit. 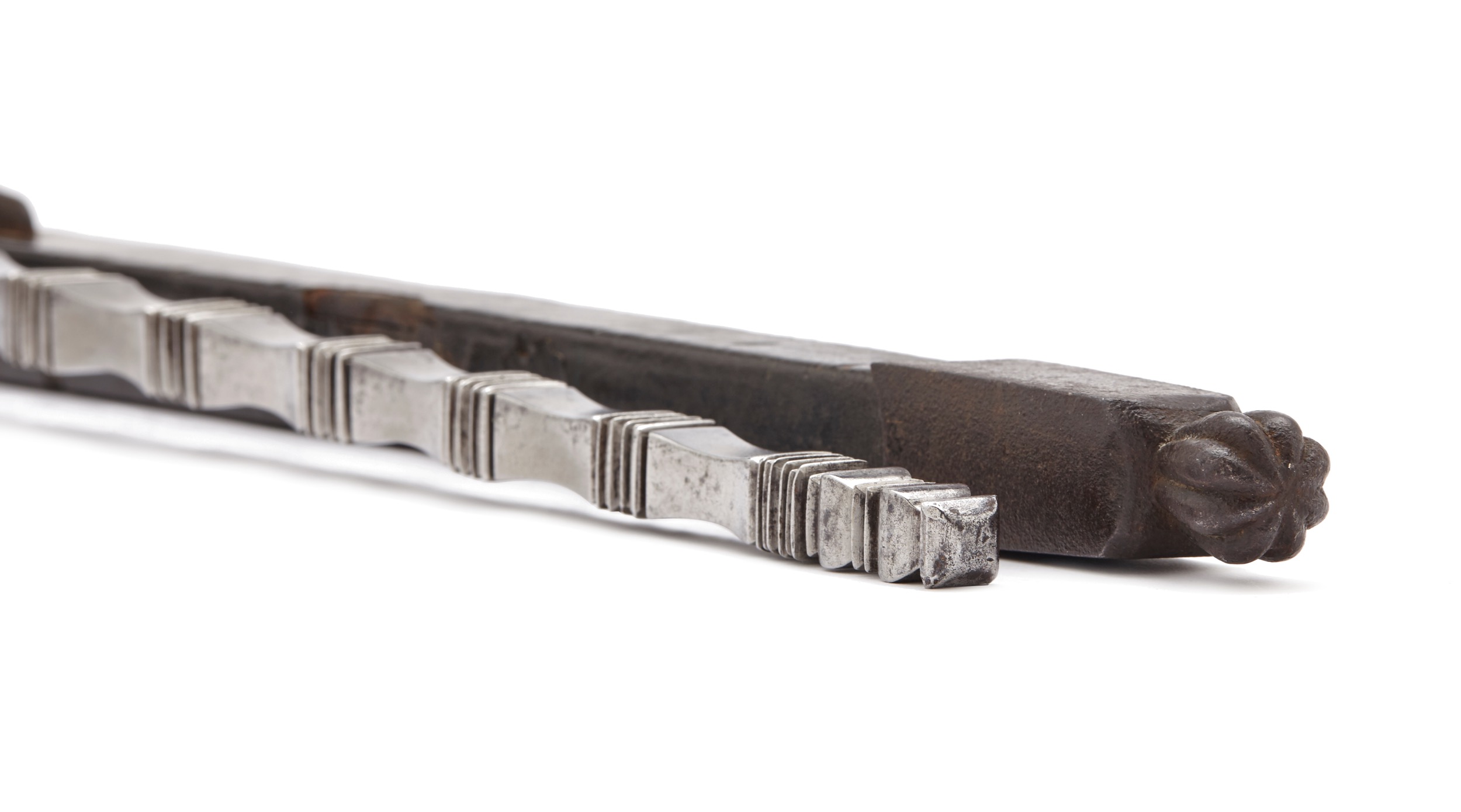 At first glance this looks like a standard pattern Qing military helmet of the late 18th century. But: The back and side flaps are indigo blue with yellow edging: Jianruiying colors.

A practical helmet, the flaps are brigandine with rectangular steel plates are secured inside the fabric with rivets that can be seen from the outside. 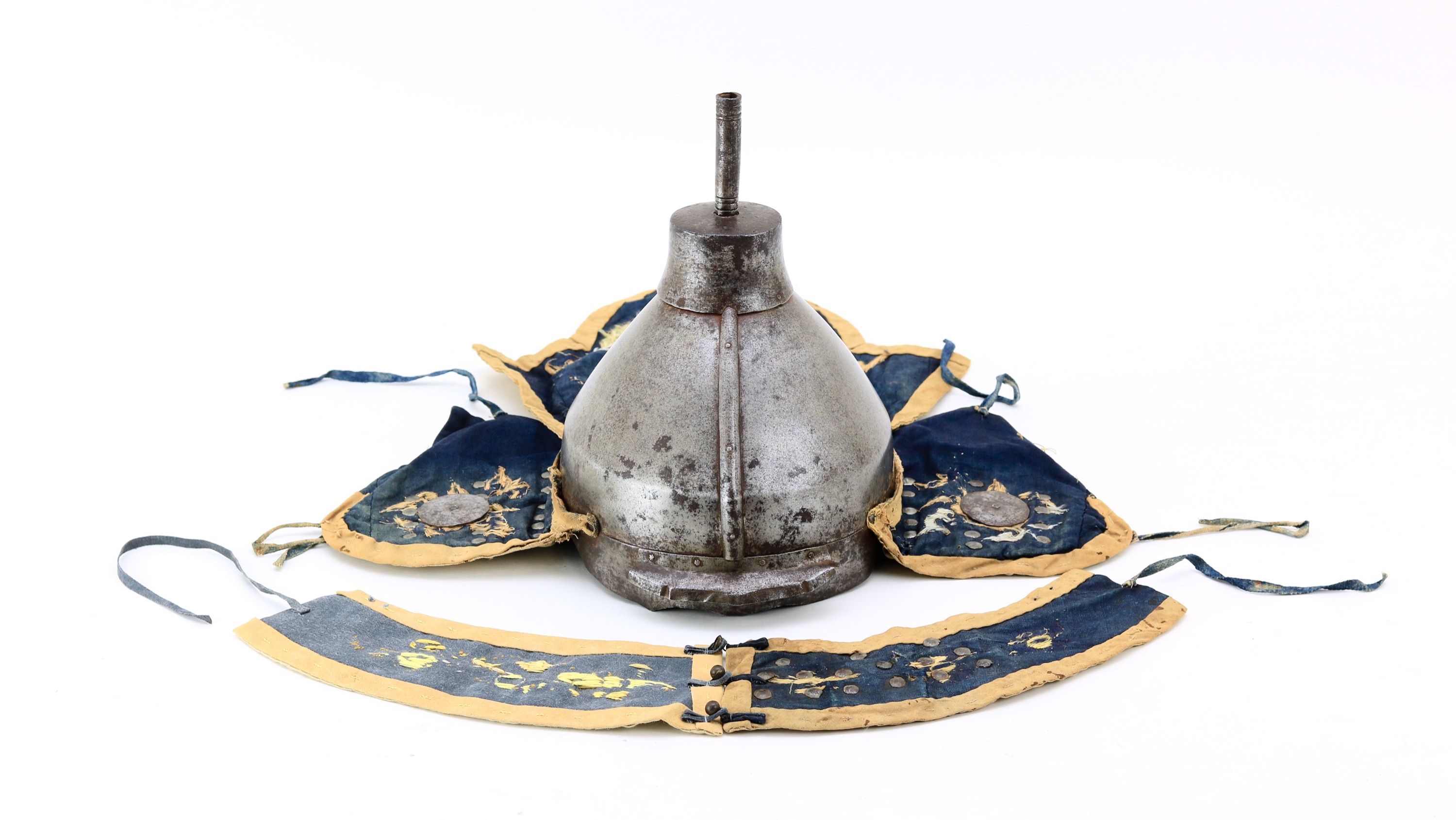 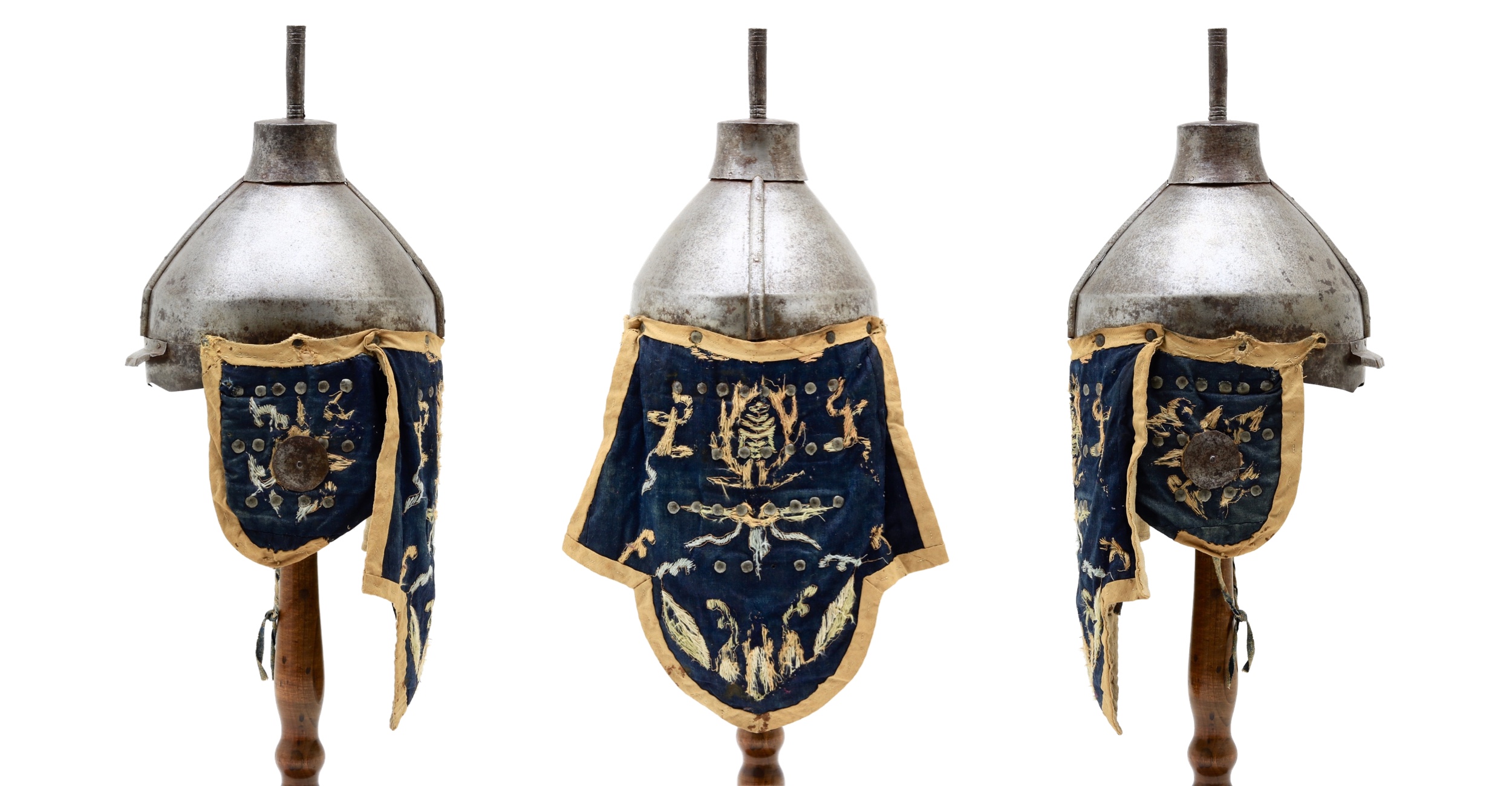 Jianruiying helmet. Back and side views.
Author's collection. 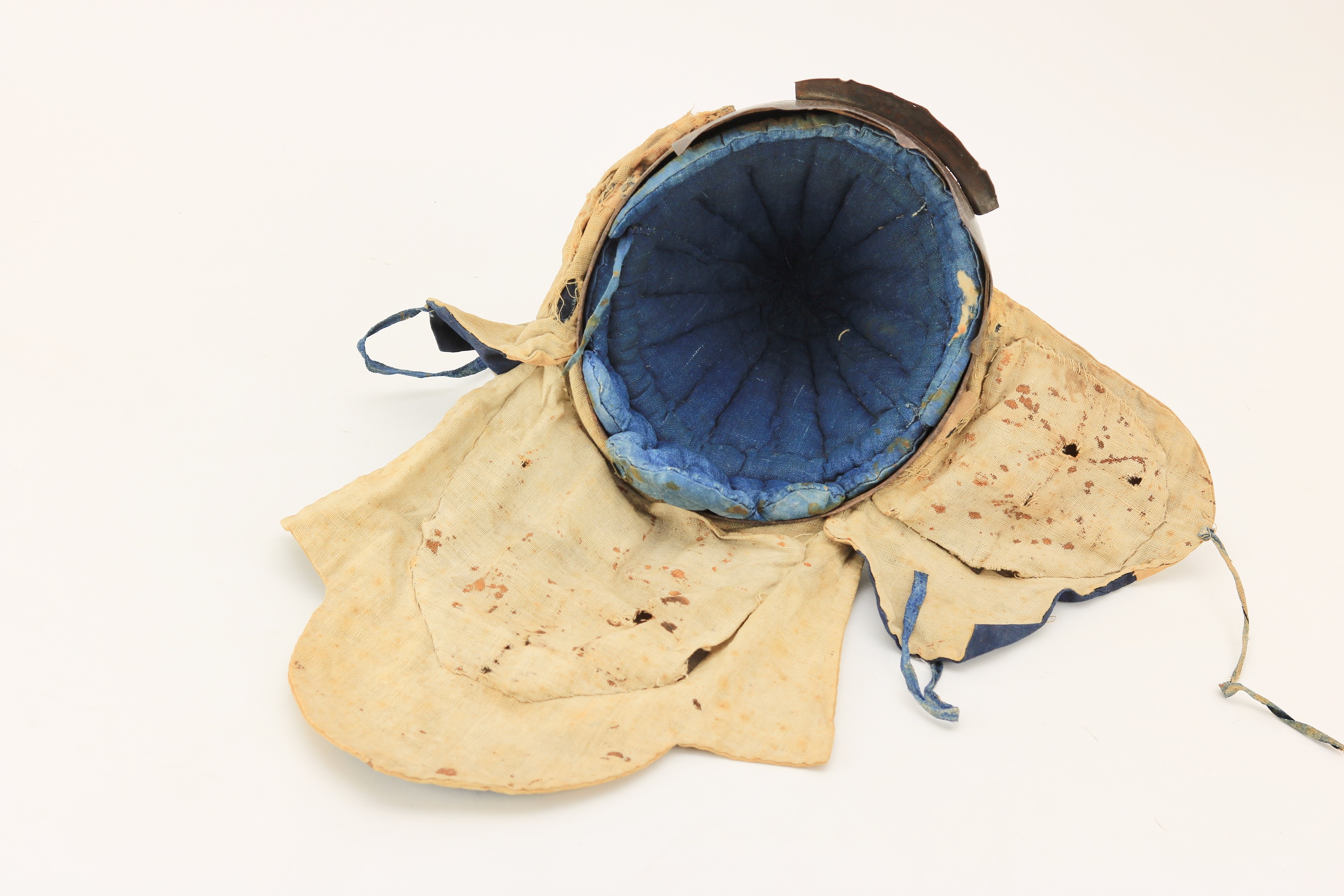 View inside the helmet, showing the liner cap. 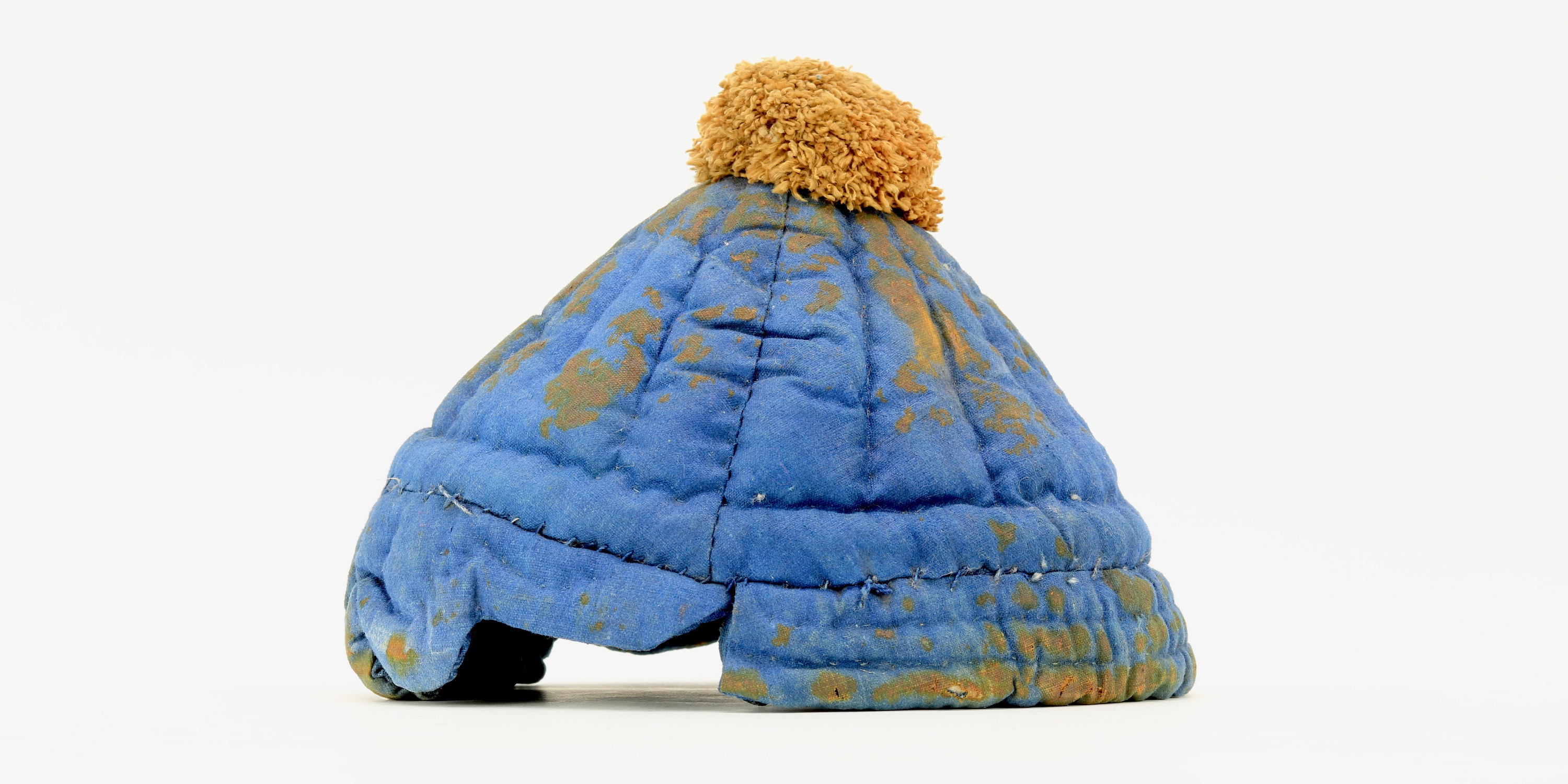 Liner cap in Jianruiying colors.
(Usually, these are black and red, regardless of banner affiliation.) 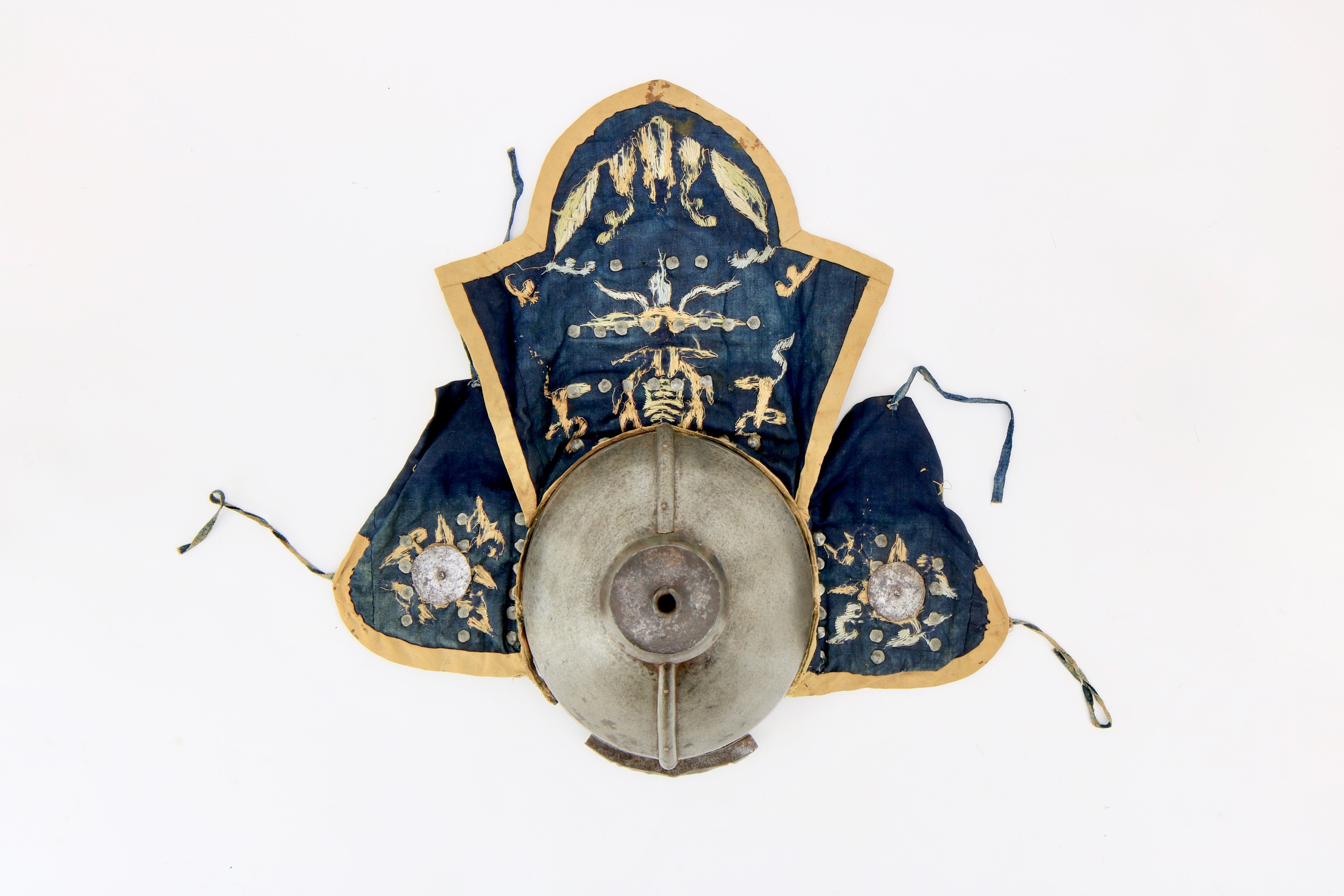 I'm a bit of an arrow geek and I was very pleased to have found this one. It's pretty much a standard Qing war arrow, like many, of a type that was brought back by many soldiers following the conflicts between China and Western forces between 1860-1900.

This particular arrow has one addition that no other arrows I have ever seen has: The Manchu word silin on the shaft, the first word of Silin dacungga kūwaran, the Manchu name for the Jianruiying.

The arrow probably dates from the last combat mission of the Jianruiying that I am aware of. It was mid August 1900 when the Jianruiying successfully slowed down the progress of coalition forces long enough for Cixi, the Empress Dowager, to get away from the Palace.

Most of the Jianruiying perished in the action. Many war arrows picked up during these battles have blood in between the feathers, probably blood that sprayed from the owner on the fan of arrows in his quiver. This arrow has the same splashes of dried blood, also probably from its owner. 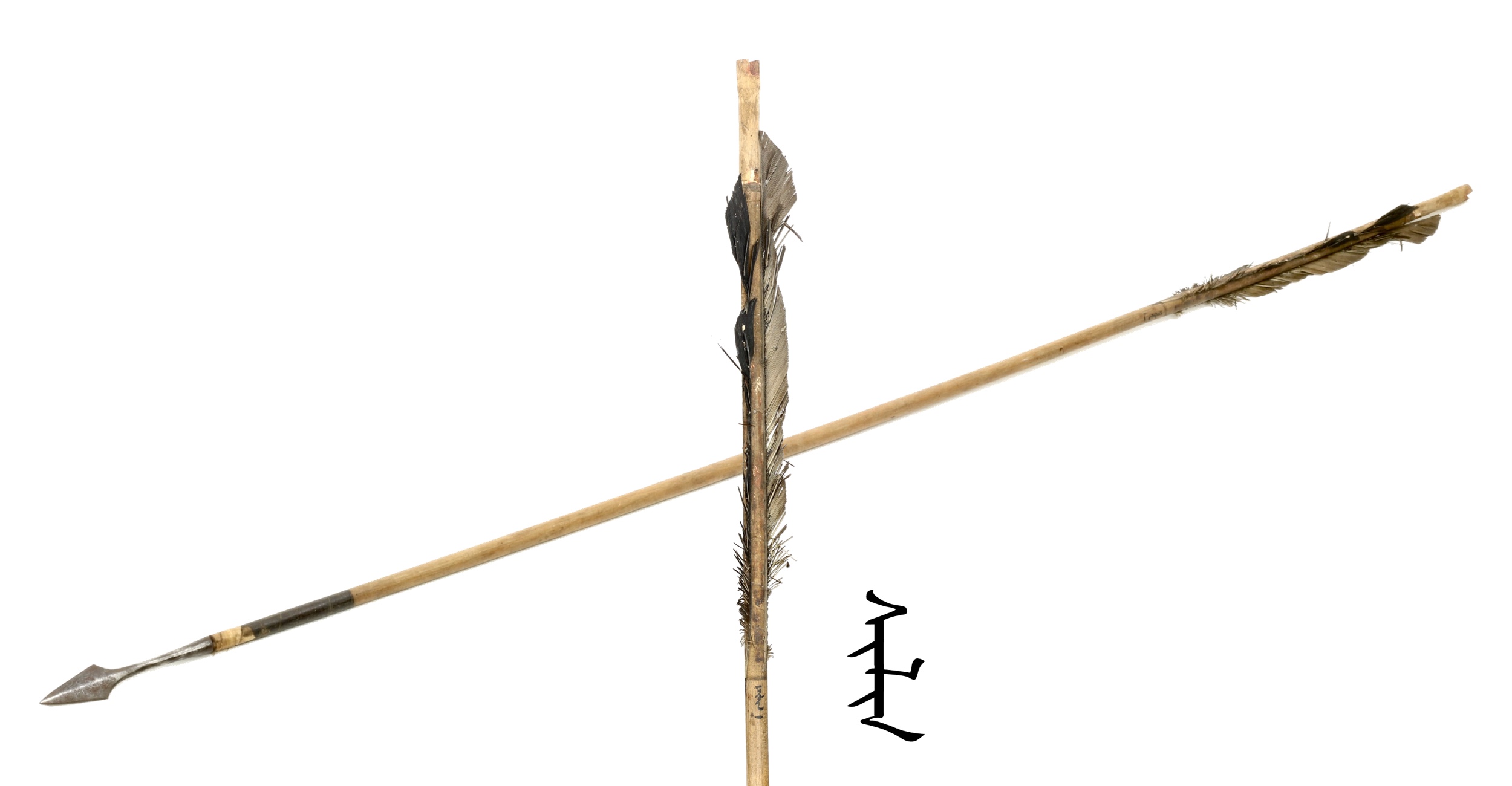