Seleme is a large hunting knife. In Chinese, it is called shùndāo (順刀) which literally means something like "straight knife".

It is used to describe a type of large hunting knife with a straight or fairly straight blade, sometimes with a double-edged tip. The tang is typically as wide as the hilt, with handle scales riveted to each side. The hilt has no guard, and part of the hilt sinks into the scabbard when sheathed. They are mainly associated with the Manchus and their outdoor lifestyle.

According to the 18th century Huangchao Liqi Tushi, two types of shùndāo were worn by members of the elite Vanguard. There was a different shùndāo for each of the Vanguard's wings, left and right. The National Museum of Scotland holds a rare color folio of this work depicting the "Vanguard Left Wing Shùndāo": 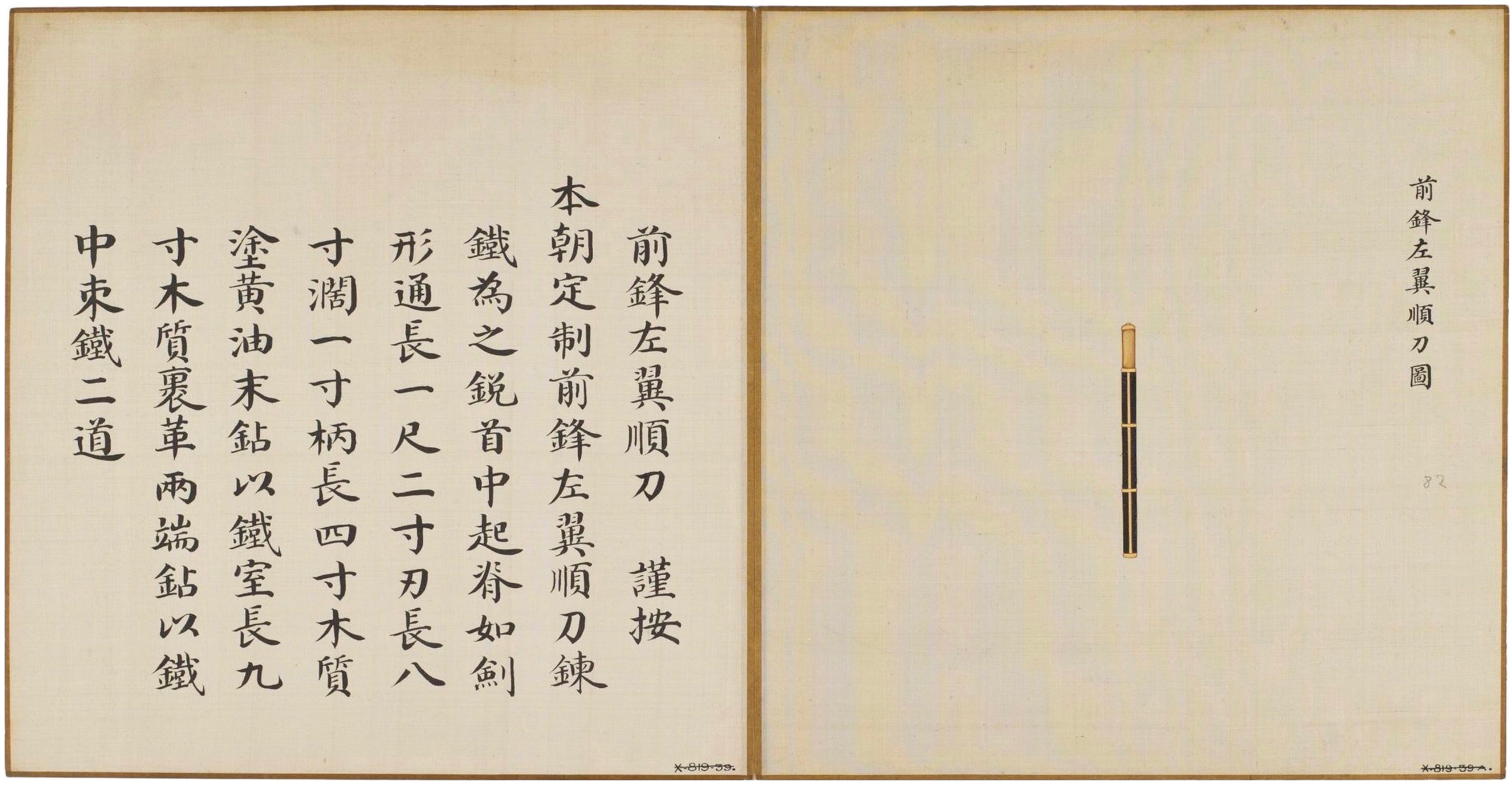 Vanguard Left Wing Shùndāo, according to the regulations of the dynasty:

The Vanguard Left Wing Shùndāo is made of forged iron. It has a sharp tip with a center line, like a straightsword.

Hilt is 4 cun long. The wood is rubbed with yellow oil. It is capped with an iron pommel.

The sheath is 9 cun long, made of wood and covered with leather.

On either side is an iron mount, in between are two iron bands.

Apart from the large, machete-sized shùndāo there is also mention of several smaller versions.

Translated: "A type of blade shorter than those worn on the side; it has no guard. A hunting knife that is carried in front."

Translated: "A kind of hunting knife. Smaller than the one called seleme."

This piece is simply described as a small knife in a scabbard by other period dictionaries.

Among antiques, many smaller examples come with a scabbard that also fit two chopsticks and sometimes other utensils. Elaborate sets came in a case with pickle spears, cups, and other accouterments. 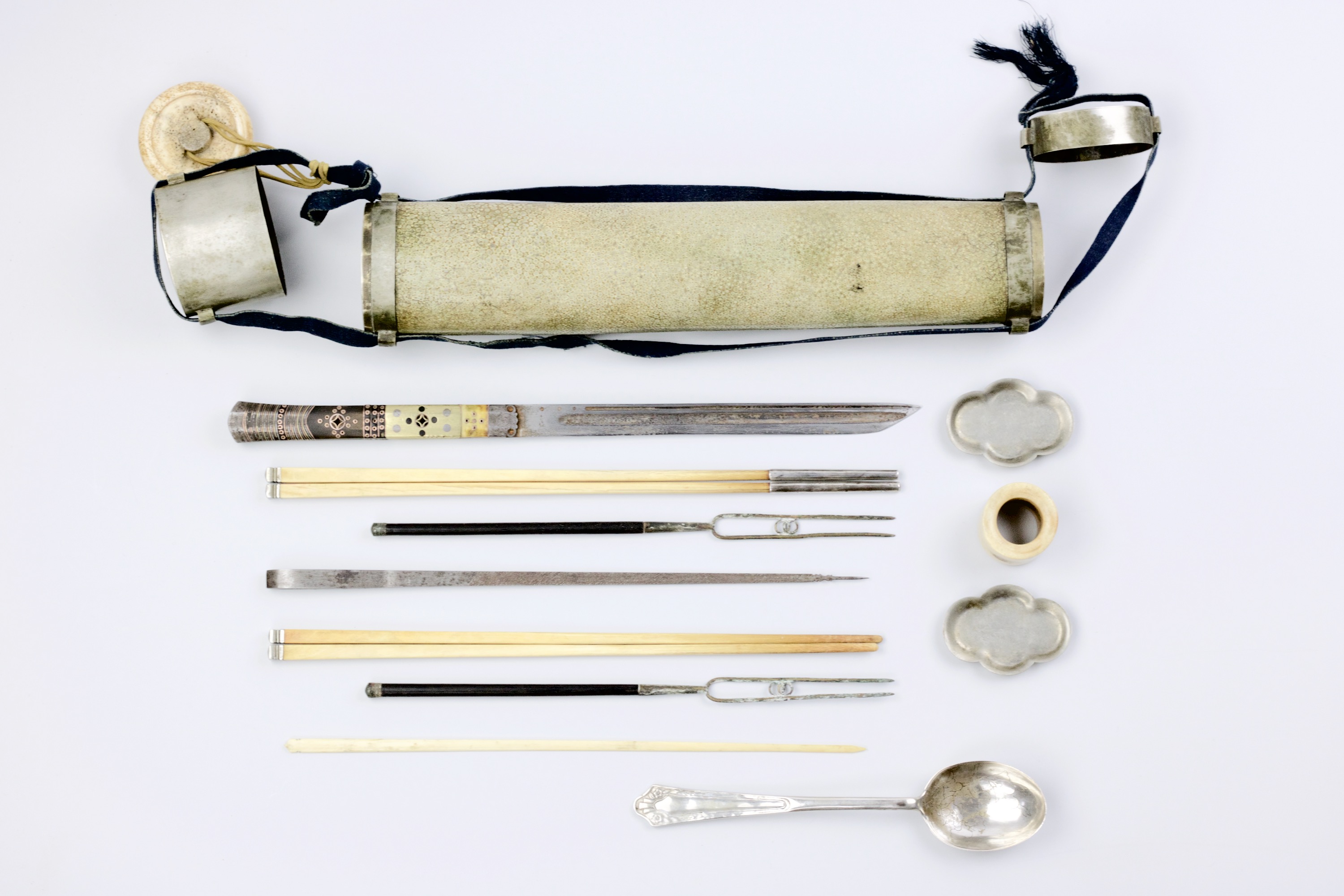 Such knives were worn as utility knives by most peoples in and around the Chinese empire, predominantly by those with a more outdoor lifestyle like the Mongols, Manchus, and Tibetans. The various cultures gave their own twist to the design.

As a staple of Manchu lifestyle

These knives facilitated the traditional nomad style of meat-eating, cutting it straight from the bone. This was in contrast to the Chinese method of eating, where the food was pre-cut into bite-sized pieces that could be eaten with chopsticks. In an attempt to preserve the rough outdoor nature of the Manchu and Mongol lifestyles under the Qing, it became mandatory for Manchu and Mongols to wear their knife at all times and cut their own meat.

The Qianlong emperor erected a stone plaquette inside the Arrow Pavilion, which had in its front yard the training fields for court archers, and was also the place for top-level military exams. It quoted a speech by Hong Taiji of 1636. A passage:

"Should we abandon our shooting from stance and horseback, then we might as well also start wearing big robes with wide sleeves, start eating the meat that others have slaughtered for us. Should it go down this path, how then would we be any different from those idiots?" 4