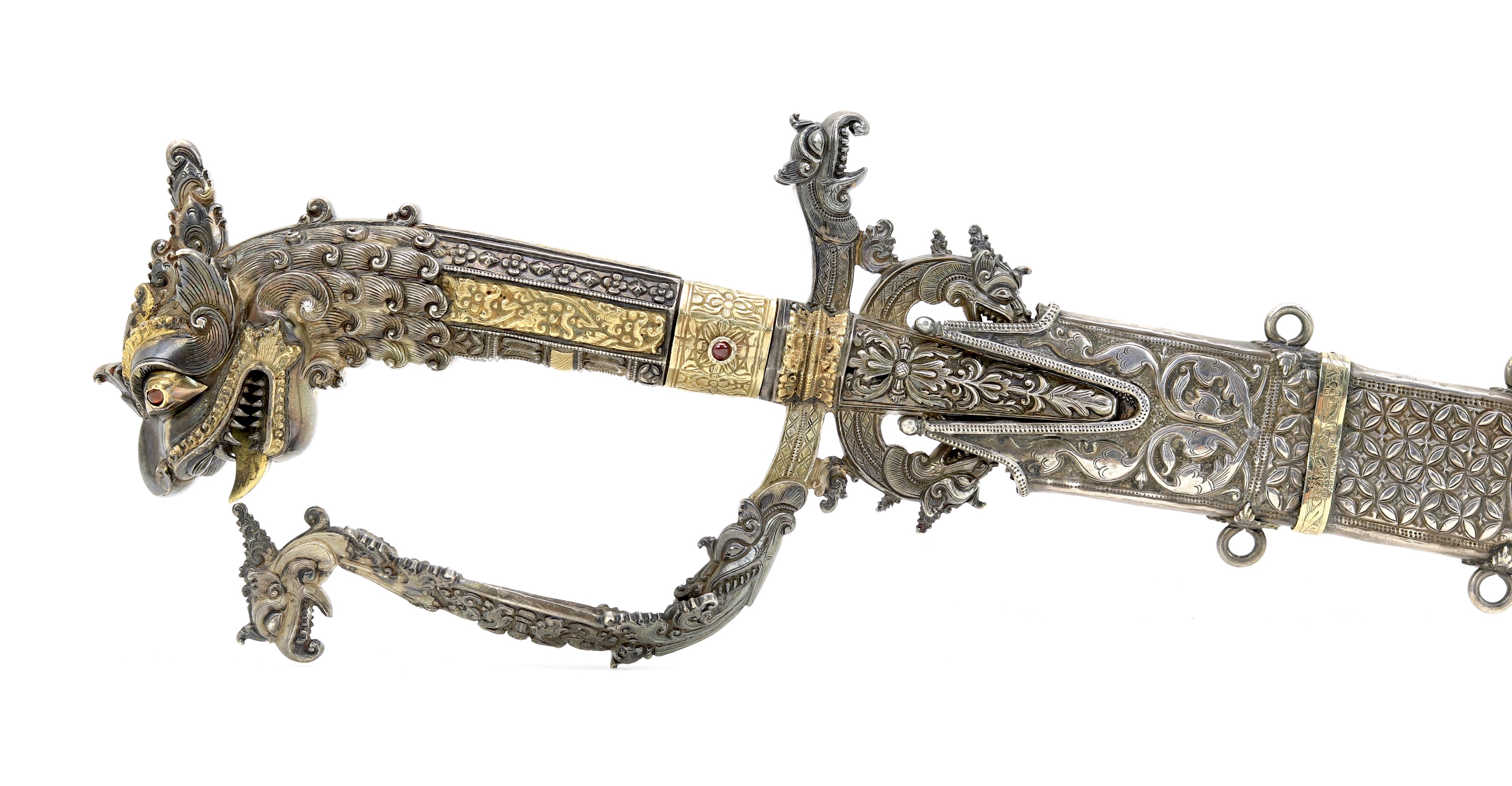 From the collection of Alexander von Hoffmeister.

The kasthāné is the national sword of Sri Lanka. It seems to have emerged in the 16th century following the first contact with Europeans. The general design shows influences from various cultures but their execution is wholly Sinhalese, exhibiting classic Sinhalese motifs and lion head pommels after the royal emblem.

Silver mounted kasthāné like this example were made in the Paṭṭal Hatara, the royal workshops of the king of Kandy. These shops made all the weapons and regalia for the king himself, and also those he bestowed upon noblemen and local chieftains as symbols of rank and office, or as gifts to diplomats. Gold was reserved for the king himself and silver for his highest officials, Adigar, who were basically feudal lords that also acted as ministers and governors.

"When he first promotes them [the Adigar] (…) he (...) gives them a sword, the hilt all carved and inlaid with silver and brass very handsomely, the scabbard also covered with silver - a knife, and halberd; and lastly, a town or towns for their maintenance." 1

"Al the men in office wear swords of a moderate size, antiquated and not formidable in appearance. The hilt and scabbard are made of silver. The former imitates the head of a tiger, the later is embossed and turned round at the point." 2

A beautiful kasthāné with a narrow, curved blade with a single groove on each side. The blade is plated with a bright yellow alloy giving the impression of gold.

It was obviously not intended for actual use but nevertheless did see use. Along the edge, we can see a coarse sharpening job to make the edge useable, and the blade took a considerable hit about one third from the tip. I will elaborate on this later.

The forte of the blade is covered with silver plate, engraved with fine floral scrollwork called liya-vẹla.

The hilt is of typical form, with majestic siṃha mūnu mitta, literally "lion-faced hilt" in Sinhala. It is of a style and workmanship that is attributable to the last decades of the 18th century. All details are very finely sculpted by chiseling, with much sharper detailing than is usually achieved on these which tend to be largely cast.

The lion's face has strong features, with a golden tongue protruding from a mouth full of sharp teeth, meticulously articulated. Both protruding eyes made of gilt metal, with rubies as pupils. Various elements of the face are highlighted with parcel gilding.

The main grip section is decorated with chiseled decorative motifs, with various sections plated with sheets of gold, worked in relief. The ferrule is made of gold, engraved with floral motifs and set with a ruby on either side.

The elaborate guard consists of a crossbar that forms a quillon on one side and a knucklebow on the other, both terminating in a sérapéṅdiya head. Below it are two forward swept quillons that curve into the base of the blade, both terminating into makara heads.

The langets that hold the blade are deeply chiseled in relief with Sinhalese floral motifs. The whole has a nice blueish patina, indicating silver of high purity.

The scabbard consists of two wooden plates, entirely encased in silver. It has four small rings, two on either side, for its suspension. The scabbard is worked entirely in repousse with Sinhalese floral and geometric patterns, most prominently featuring a succession of liya-vẹla, circular floral motifs covering most of either side. Two golden bands reinforce the scabbard and prevent it from splitting.

The scabbard endpiece terminates in a sérapéṅdiya with open mouth, its body consisting of liya-pata, a series of curls upon curls, one of the staples of Sinhalese design. They are believed to be a heavily stylized representation of feathers.

Rudimentary sharpening and use

I mentioned that the blade has gone through a rudimentary sharpening and looks like it has seen action. This is highly unusual for what is otherwise an ornate court piece and emblem of rank. The most likely scenario for this were the Kandyan wars between British colonial forces and the Kingdom of Kandy between 1796 and 1818.

Sir John D'Oyly noted in his diary that the Sinhalese wealthy families were ordered to get ready for war:

"The Adikar is doing nothing, but hearing Complaints, & receiving the People - The Wattoors of all the Families in the Korle, are brought down from Kandy, & one of each Family ordered to appear. He appears with a Bulat is asked, Whether he has got his Arms (Sword, Lance or Gun, according to his Family) & is told, that if he has them not in readiness, when demanded, he will be punished, & lose his Lands." 1

In February 1815 the British forces entered the capital city of Kandy, defeated the last Sinhalese resistance and captured the king on February 18th.

It is quite possible that this sword was sharpened and used for this final stand of the Kingdom of Kandy.

Hilt in near-mint condition. No damage and losses to the main work. Both sérapéṅdiya are missing little drop shaped ornaments that emerge from their mouths, otherwise complete. Blade; as mentioned it underwent rudimentary sharpening and sustained damage. This is period, working life damage and part of the history of the piece. Some minor losses to the silver sheet at the base of the blade. Scabard complete and largely undamaged. There are two areas of soldered repairs. See photos for a complete impression on quality and conditions.

A nearly identical piece was obtained by the Metropolitan Museum in 2016, accession number 2016.426a–c. 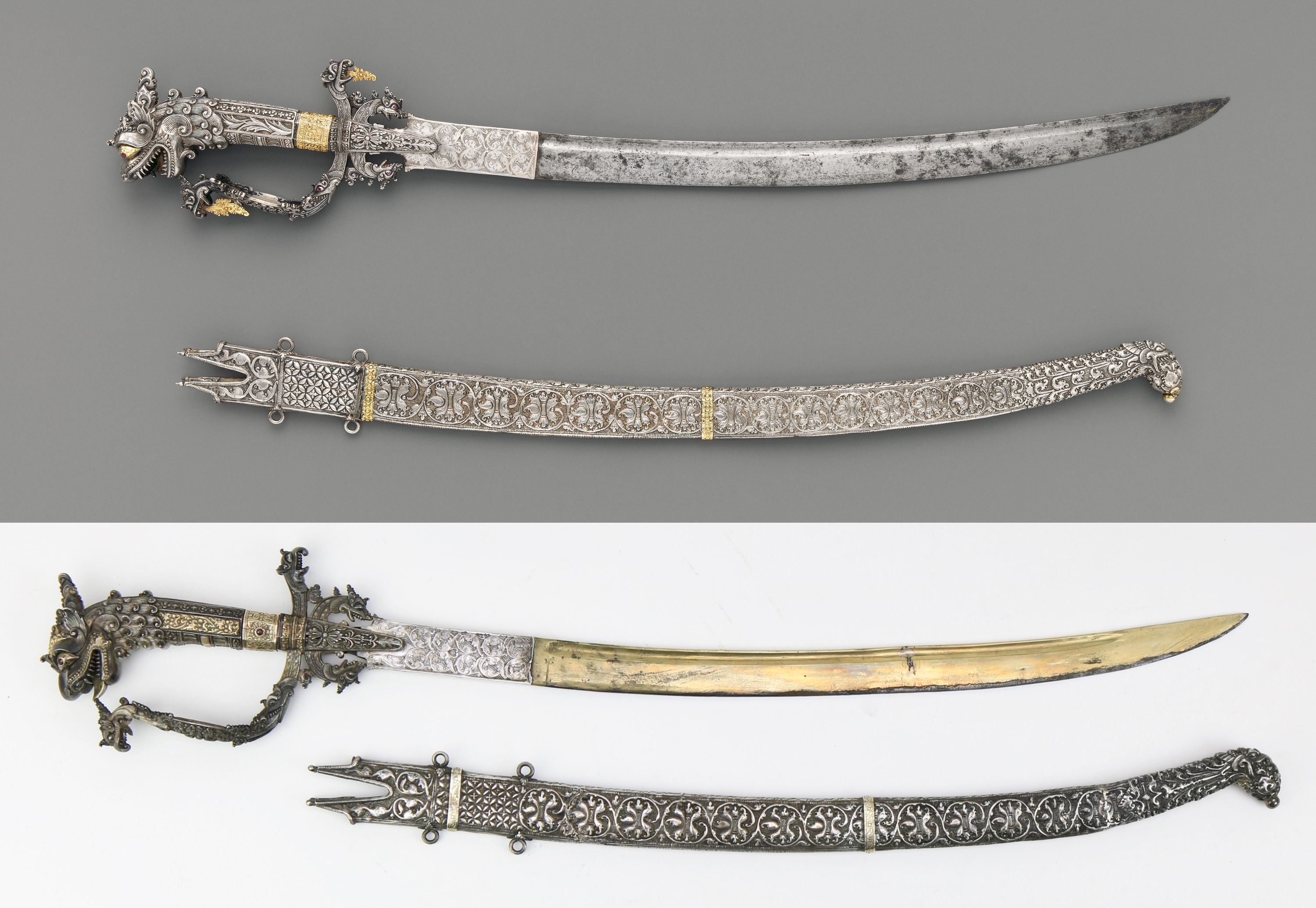 Both pieces follow a very similar pattern, with identical scabbards and very similar work on the hilts. The Met's example retains the two elements that emerge from the sérapéṅdiya heads, while ours seems to be made with more parcel gilding.

The museum's example is cleaned to a brighter finish, while the one I present here retains much of its original patina. I left it "as is" because I like that blueish hue of good old silver, and leave it up to a new owner to decide what to do in that regard.

Two other kasthāné, of slightly earlier type, were taken in 1765 and are now in the Rijksmuseum, Amsterdam. See: kasthāné in Rijksmuseum.

A very nice example of a kasthāné dating from the final decades of the Kingdom of Kandy, displaying the typical fine craftsmanship of this period. Such work came to a sudden halt when royal patronage seized after the fall of Kandy to the British. The piece shows signs of sharpening and use, possibly related to this period.

Slightly unusual for these, it has various areas where gold sheet and parcel gilding was use. In earlier times, only the king could have golden details on his swords, and only foreigners were exempt from these restrictions. It seems that in the later Kandyan period, regulations may have loosened a little allowing sparse use of gold on Adigar quality swords. 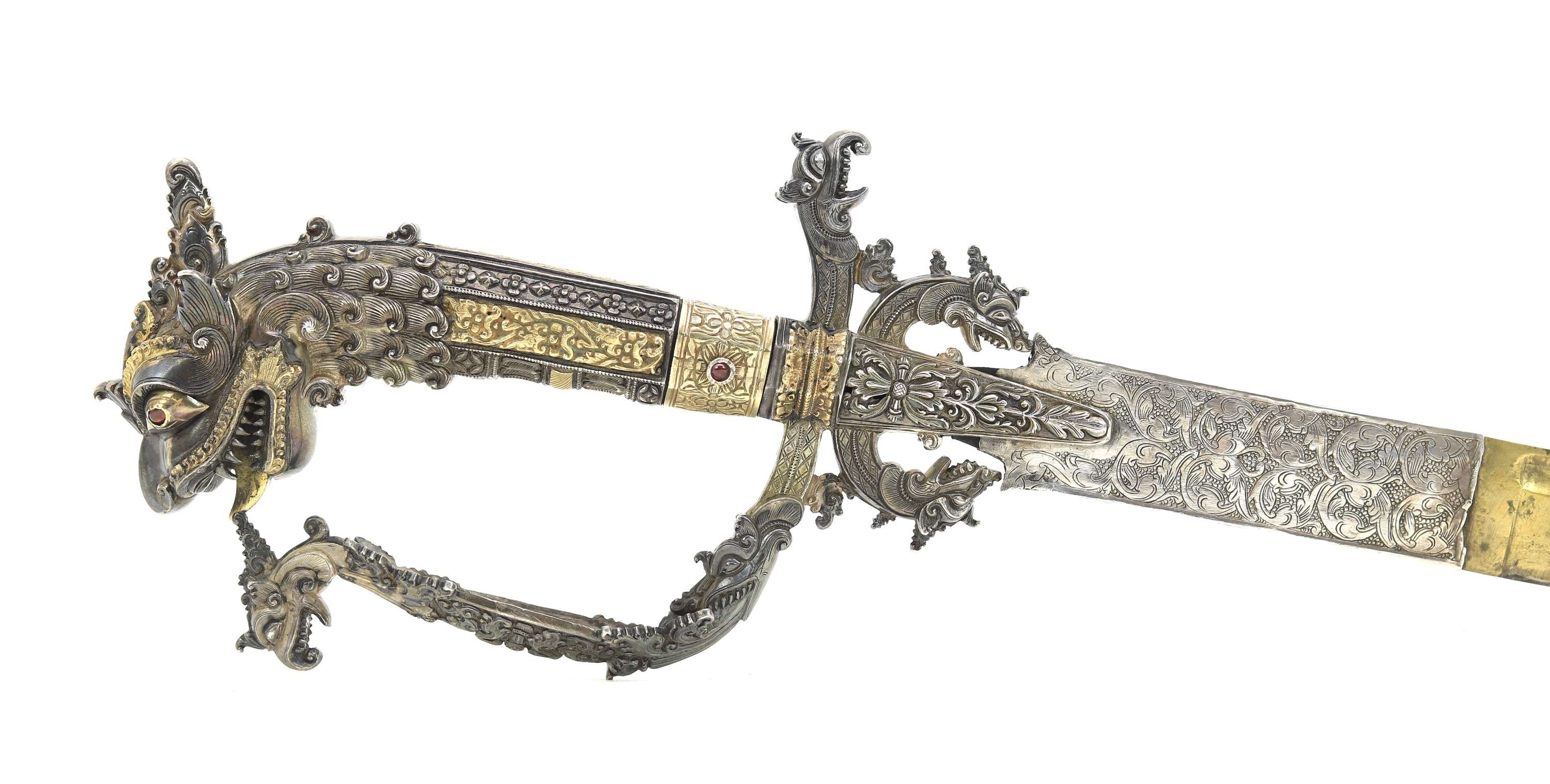 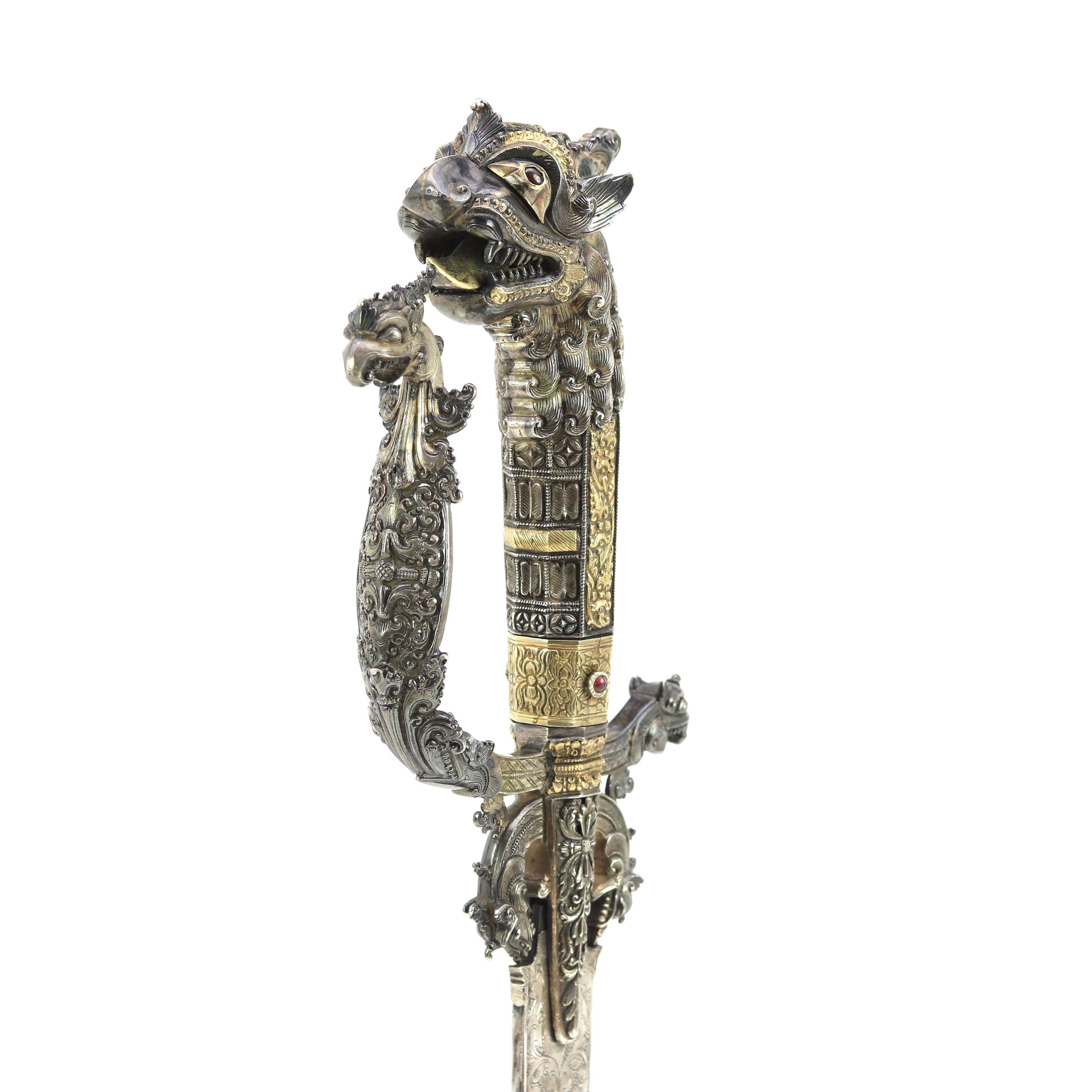 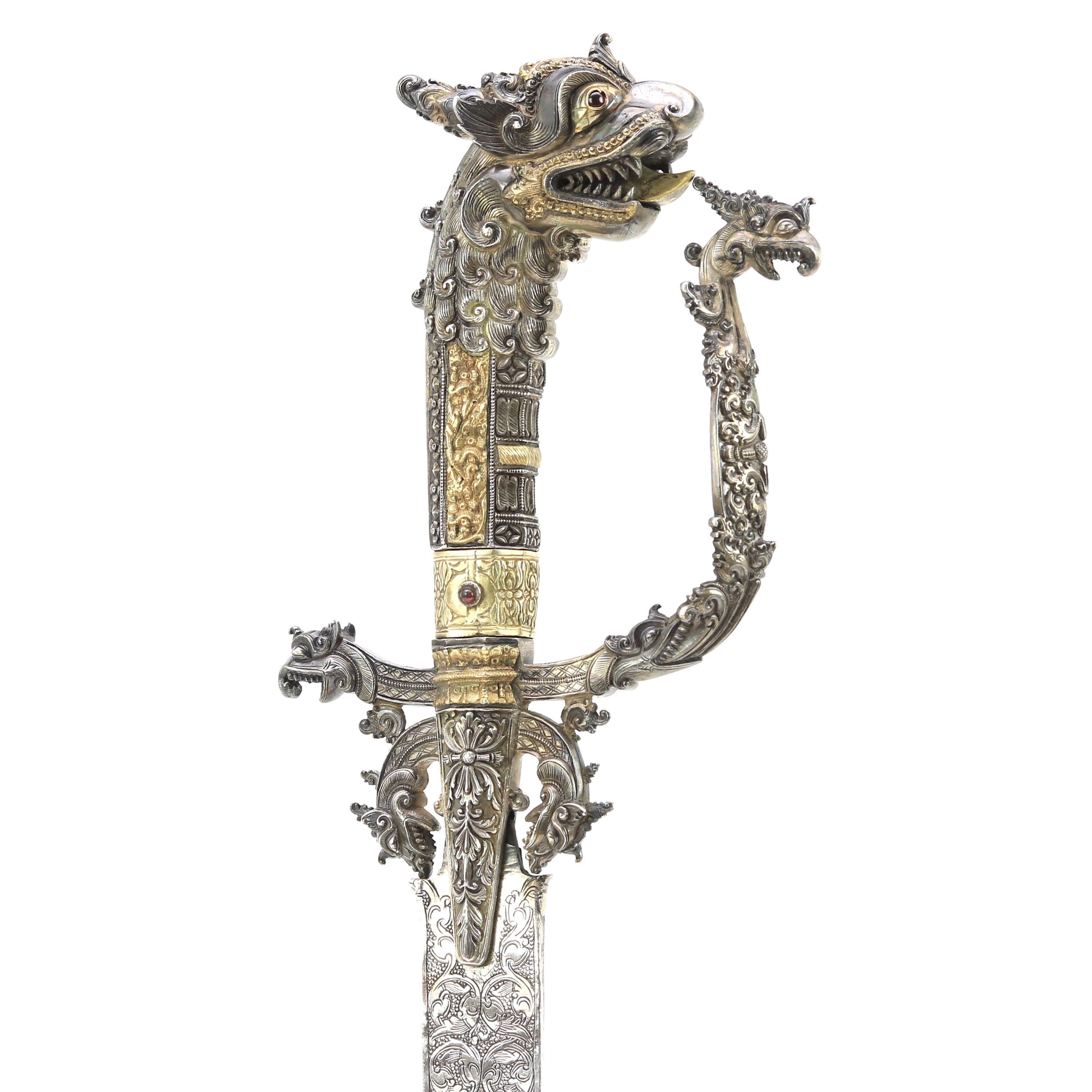 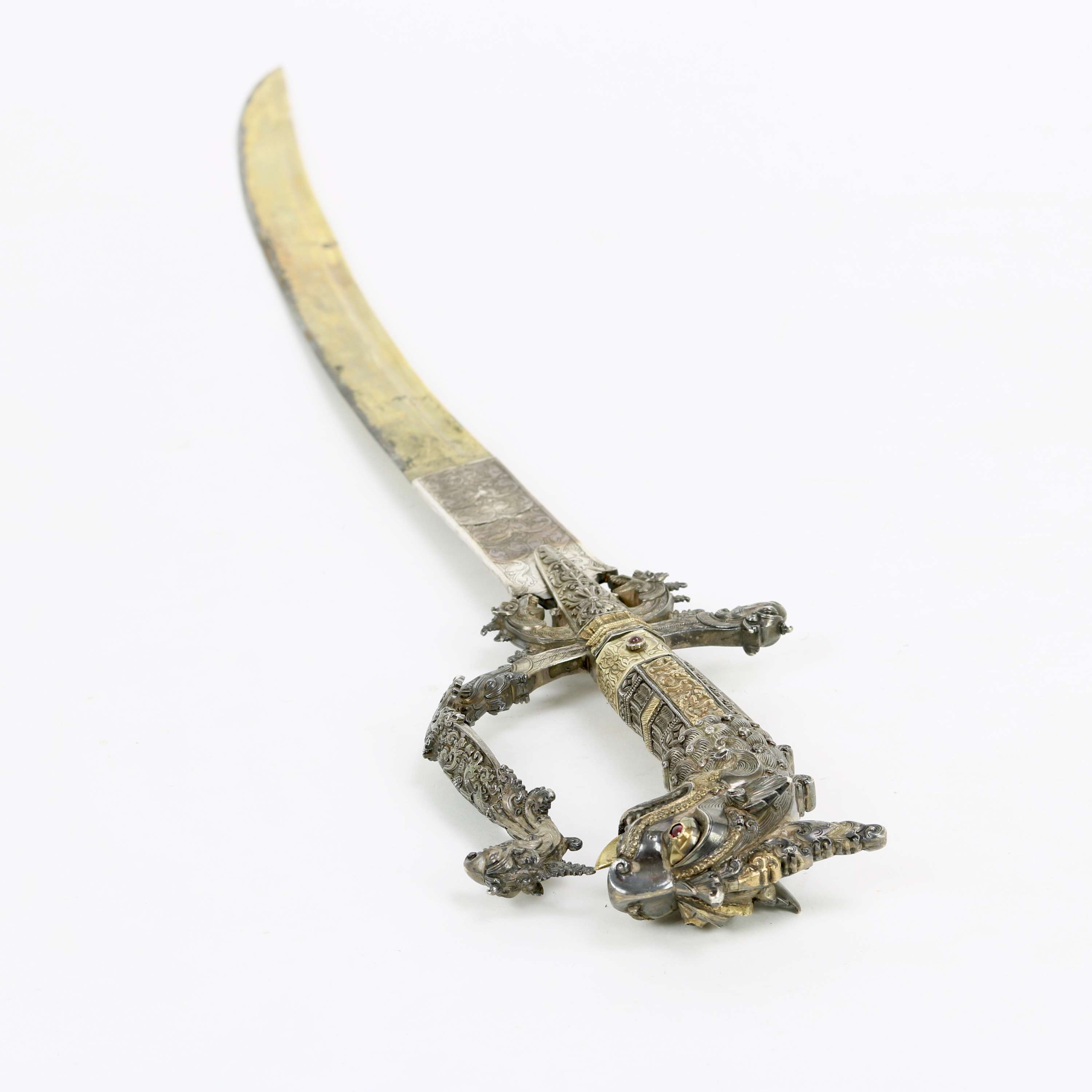 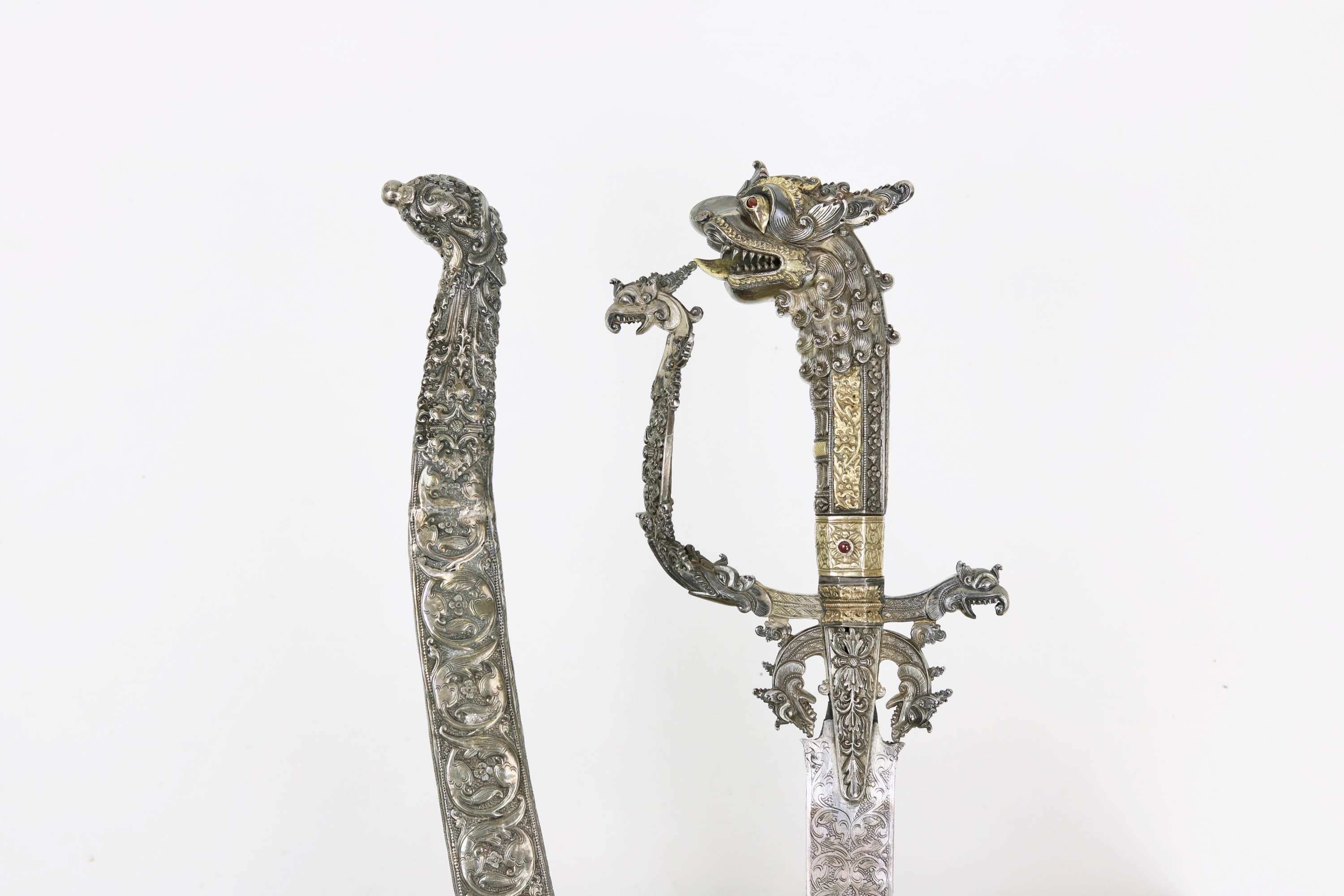