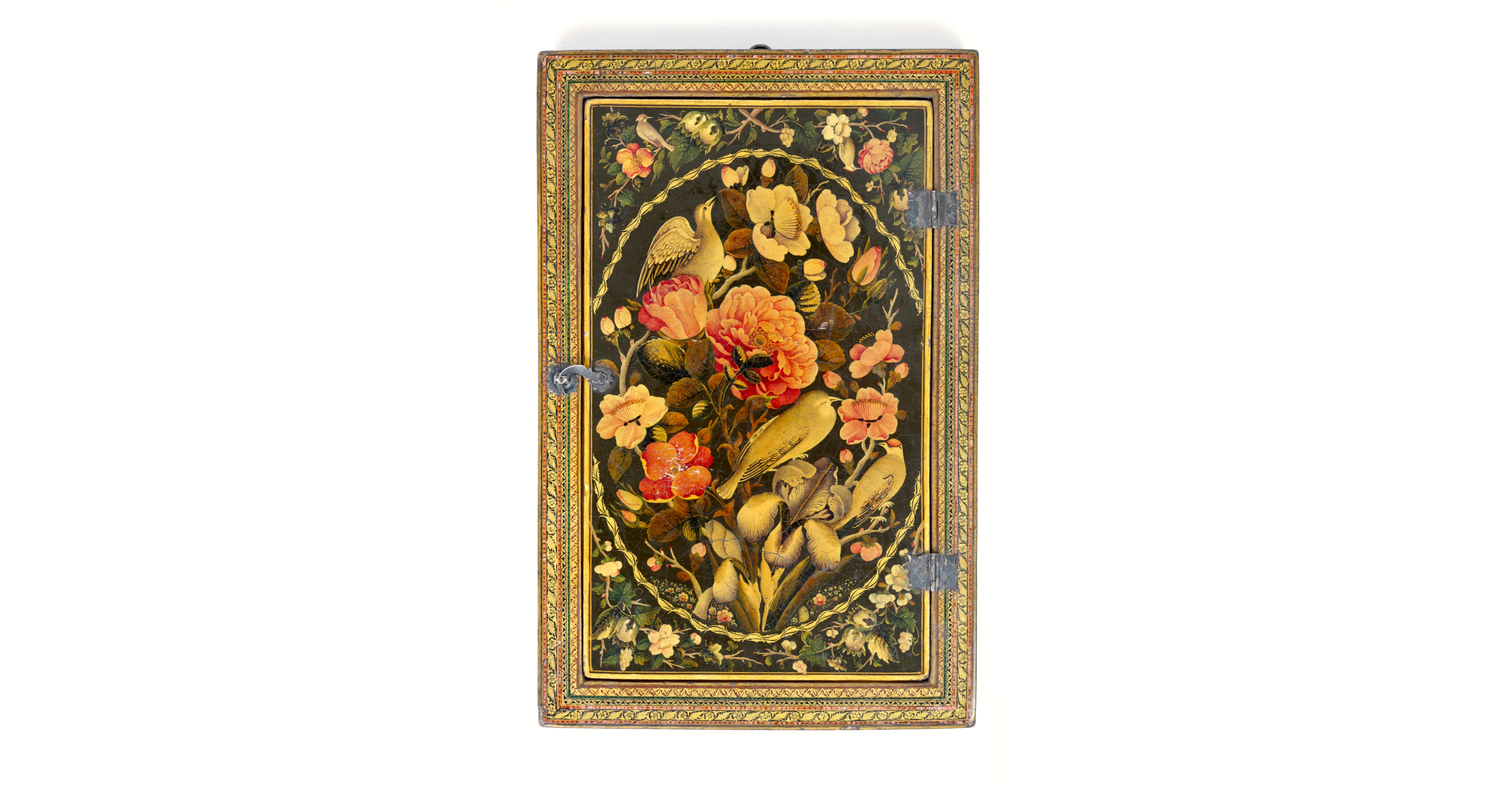 Papier-mâché base, paint and gold under a lacquer varnish

European mirrors were traded to Persia from around the 1660s, and these precious objects were often stored in special, finely lacquered cases that became artworks on their own.

Known production centers included Shiraz, Isfahan, and Tehran. Especially the painters in Isfahan were of note.

A Qajar period mirror case, painted with nightingales and roses, a common theme in Persian art called gul-u-bulbul a subtheme of the bird and flower gul-u-morḡ) genre in Persian art. Originally these motifs were copied from China art, but by the 17th century the Persians had made it their own.

"The rose symbolized perfection, beauty, and elegance, and the bird (nightingale) represented the human spirit in Persian mysticism. Together the pair stood as a metaphor for the loved and the beloved. This love could be both earthly and divine, symbolizing the soul's yearning for union with God."

The work on our case is particularly fine, and compares well to most museum examples. Flowers and birds are painted with tremendous precision, tiny brush strokes smaller than a human hair appear under high magnification. 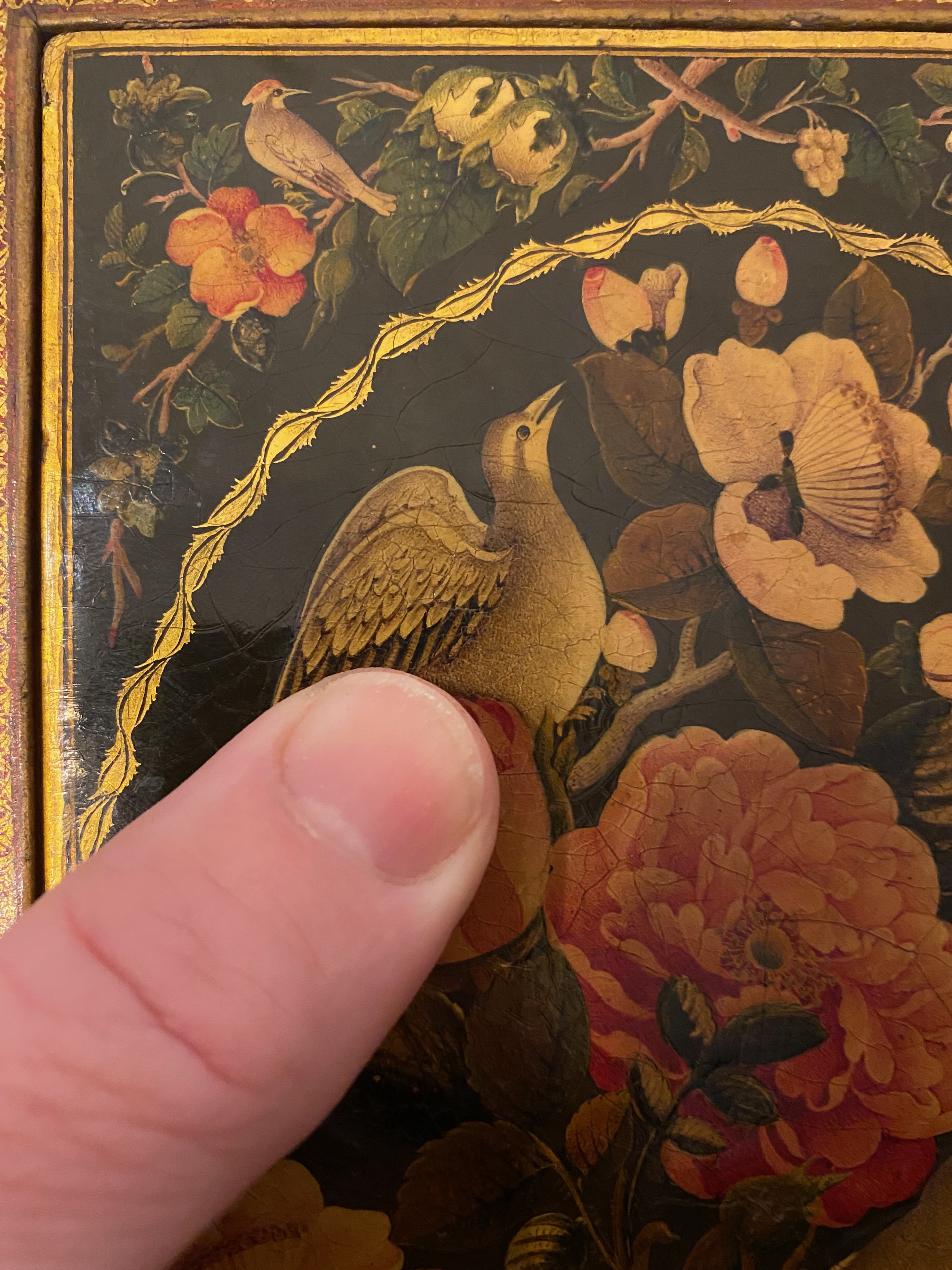 It doesn't carry a mirror anymore. On the inside is now a manuscript page in fine calligraphy. It is a section of the Shahnameh "Book of Kings" by Ferdowsi. This 10th-11th century poem is the national epic of Persia. The poem was probably added outside of Persia, because it is upside down in relation to the case decoration.

An example by the same hand, this time signed by its maker, was purchased at the Paris Exhibition of 1867. It was specially commissioned for the Persian Pavilion during this event. It is now held in the Victoria & Albert Museum, accession number 922:1,2-1869.

"This very good specimen of Persian flower painting appears from the small inscription it bears to have been made to the order of His Excellency the Mueyyir il Mumalik Lord High Treasurer of Persia, who had charge of the collection and dispatch of objects for the Paris Exhibition of 1867."

Another fine example attributed to the same artist appears in "An exhibition of 50 pieces of Persian, Indian and Turkish Lacquer" by Bernheimer Fine Arts Ltd. London 1986. Item 27, page 19. Priced £16,500.

Pretty good condition, with only some minor losses to surface. See photos. 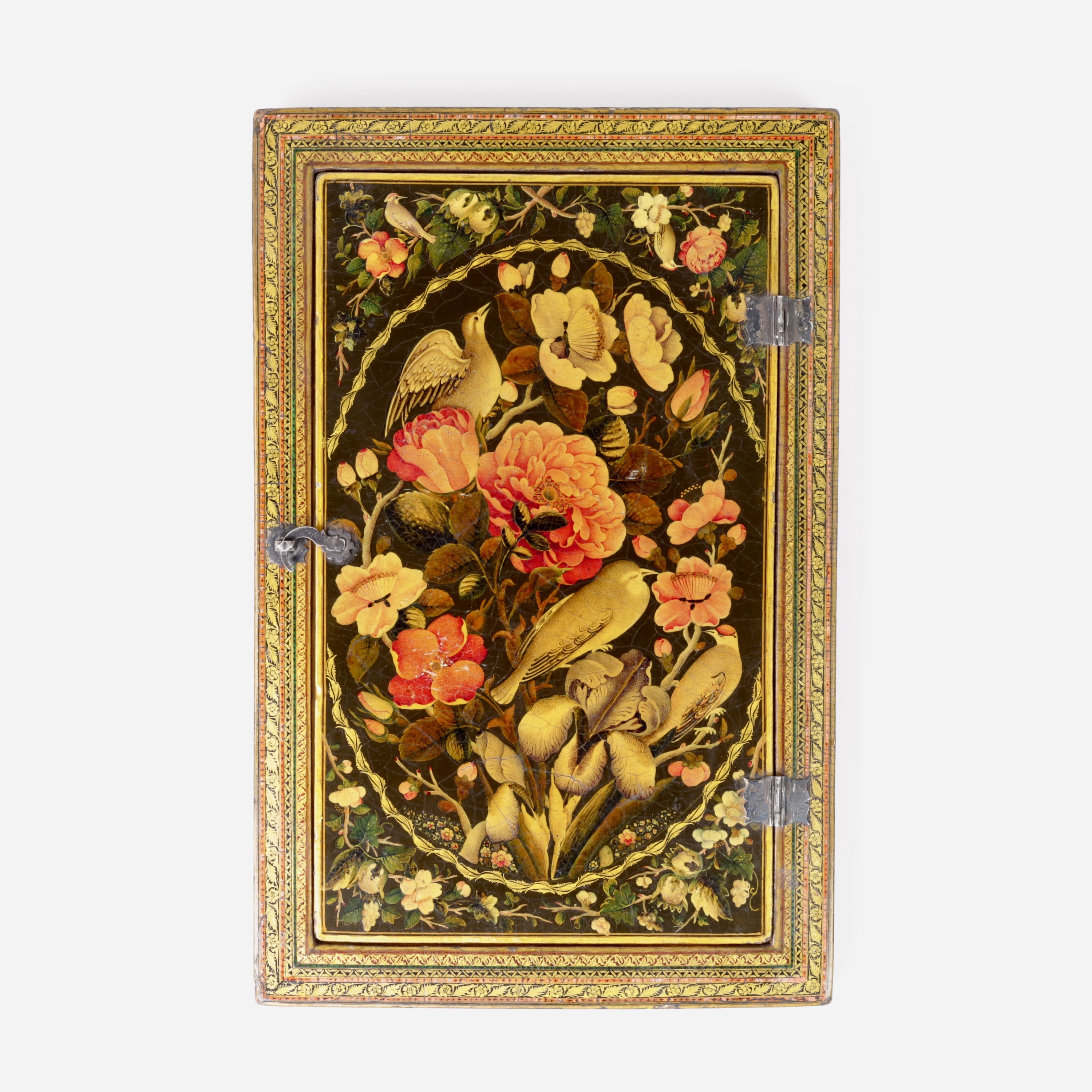 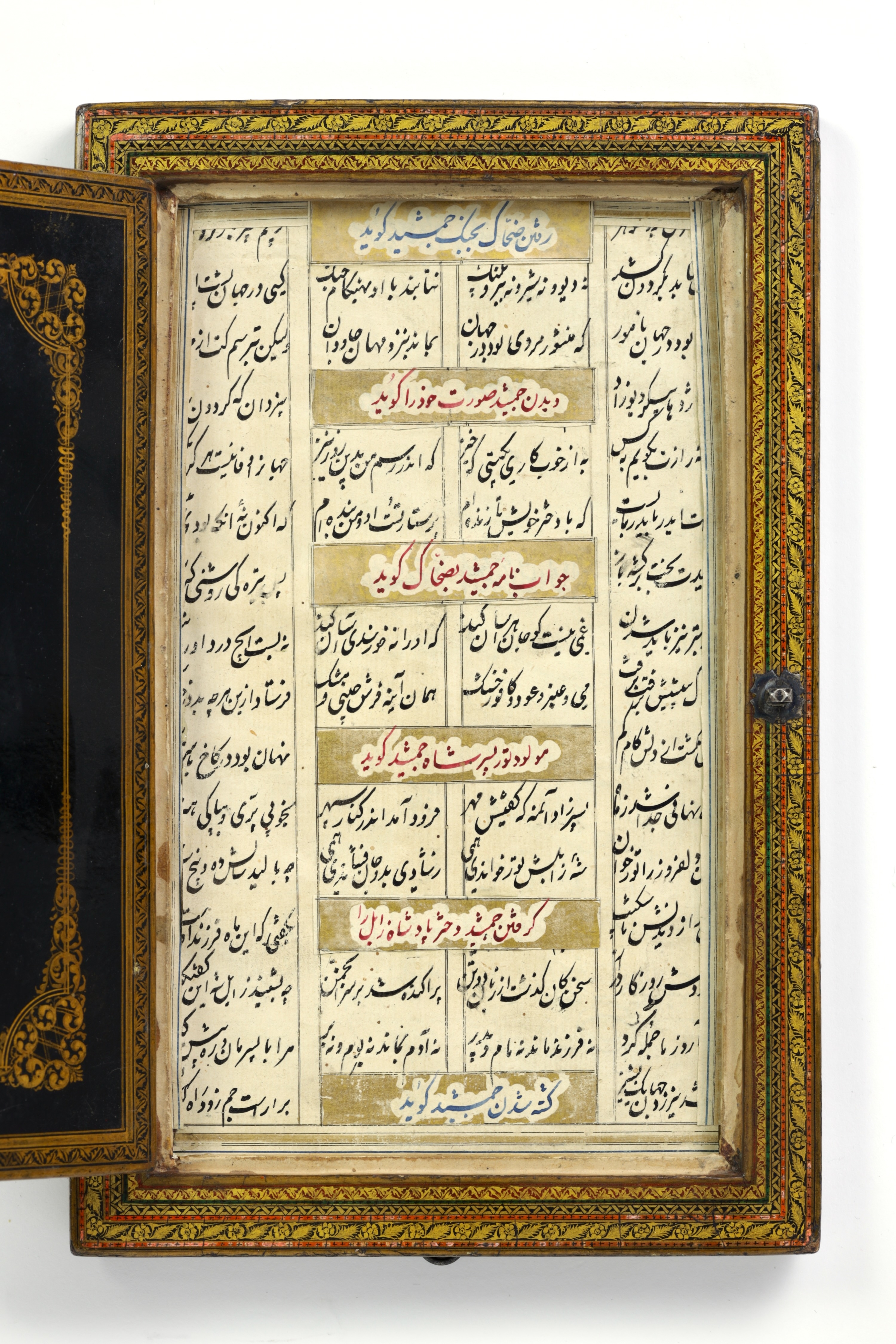 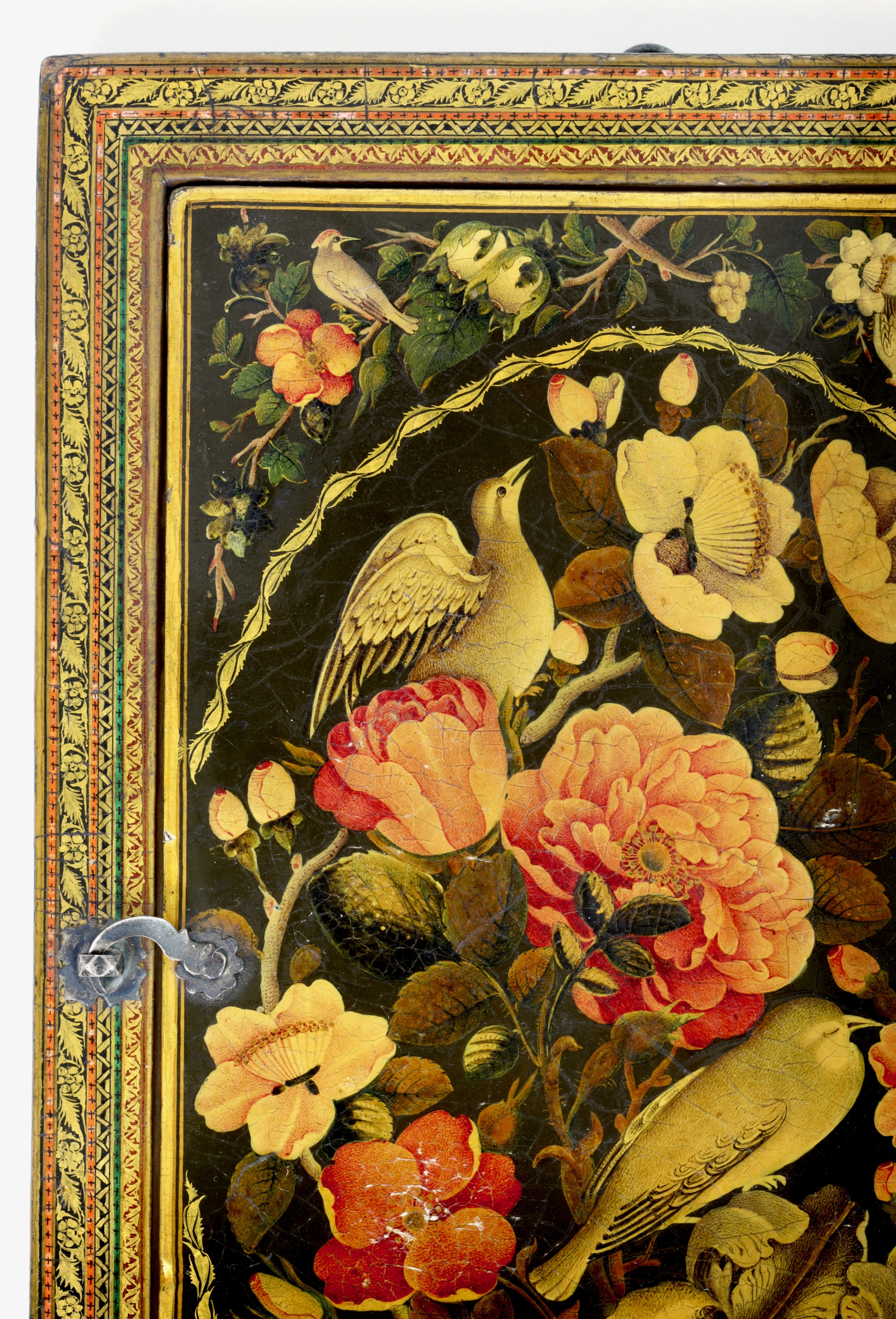 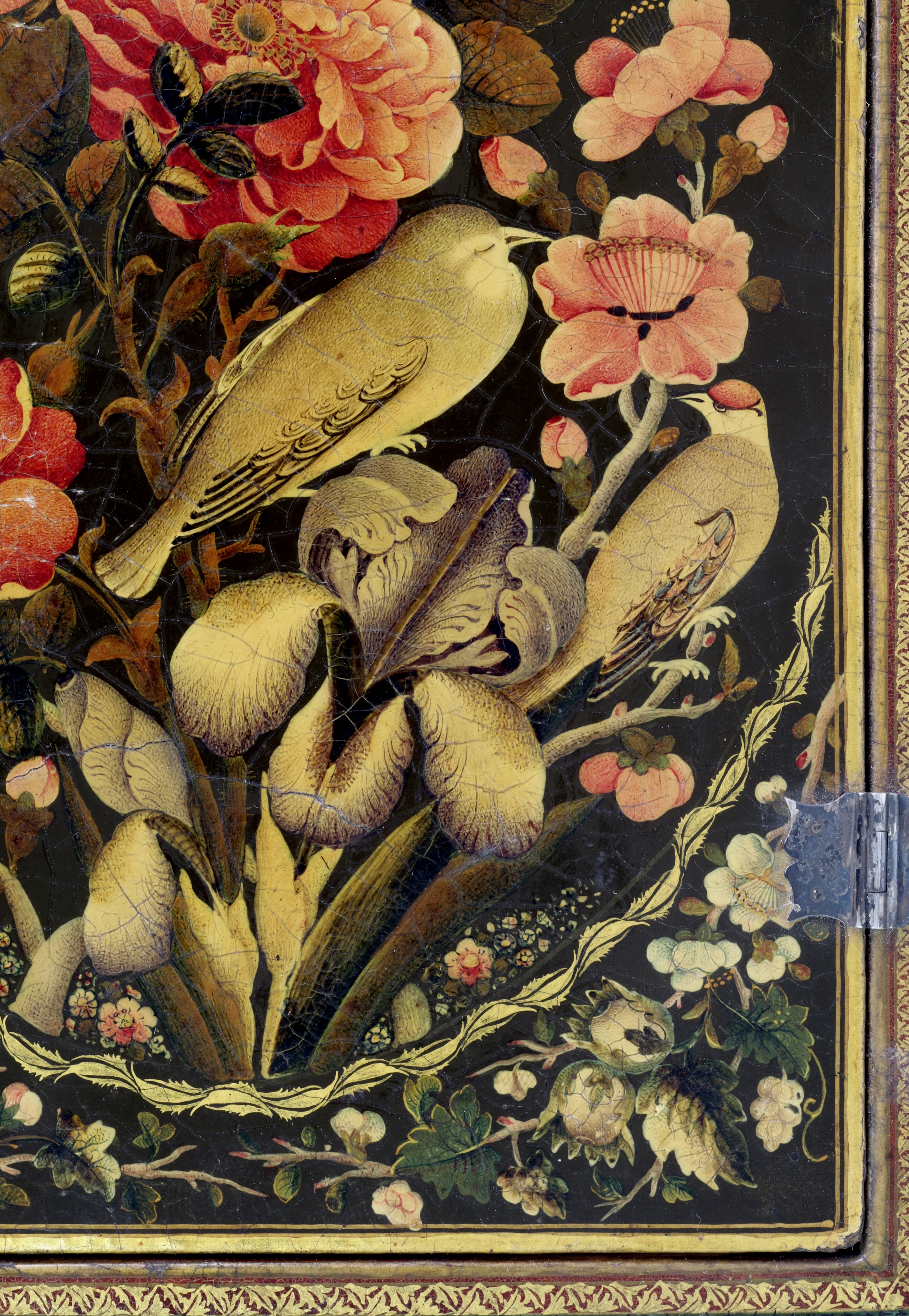 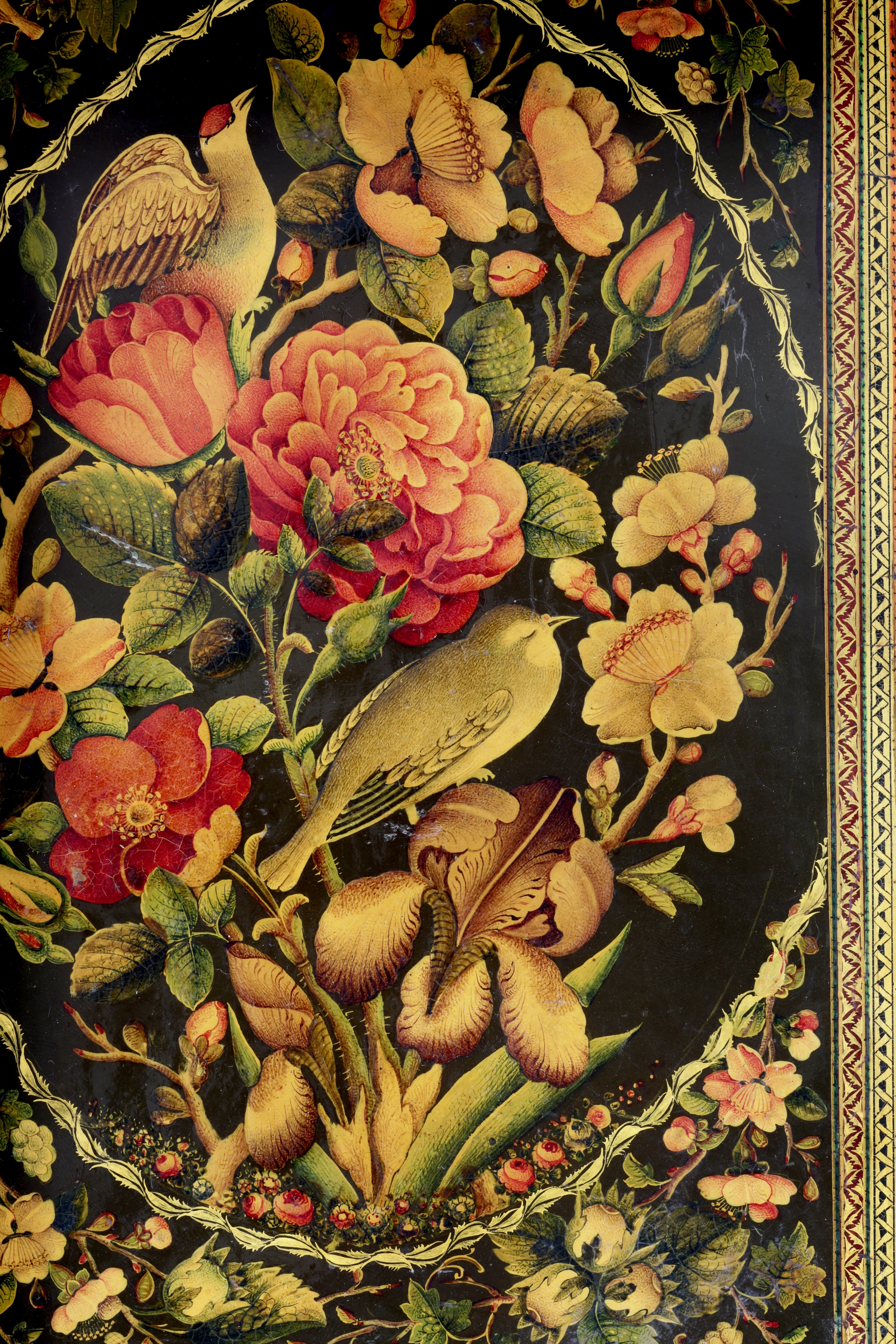 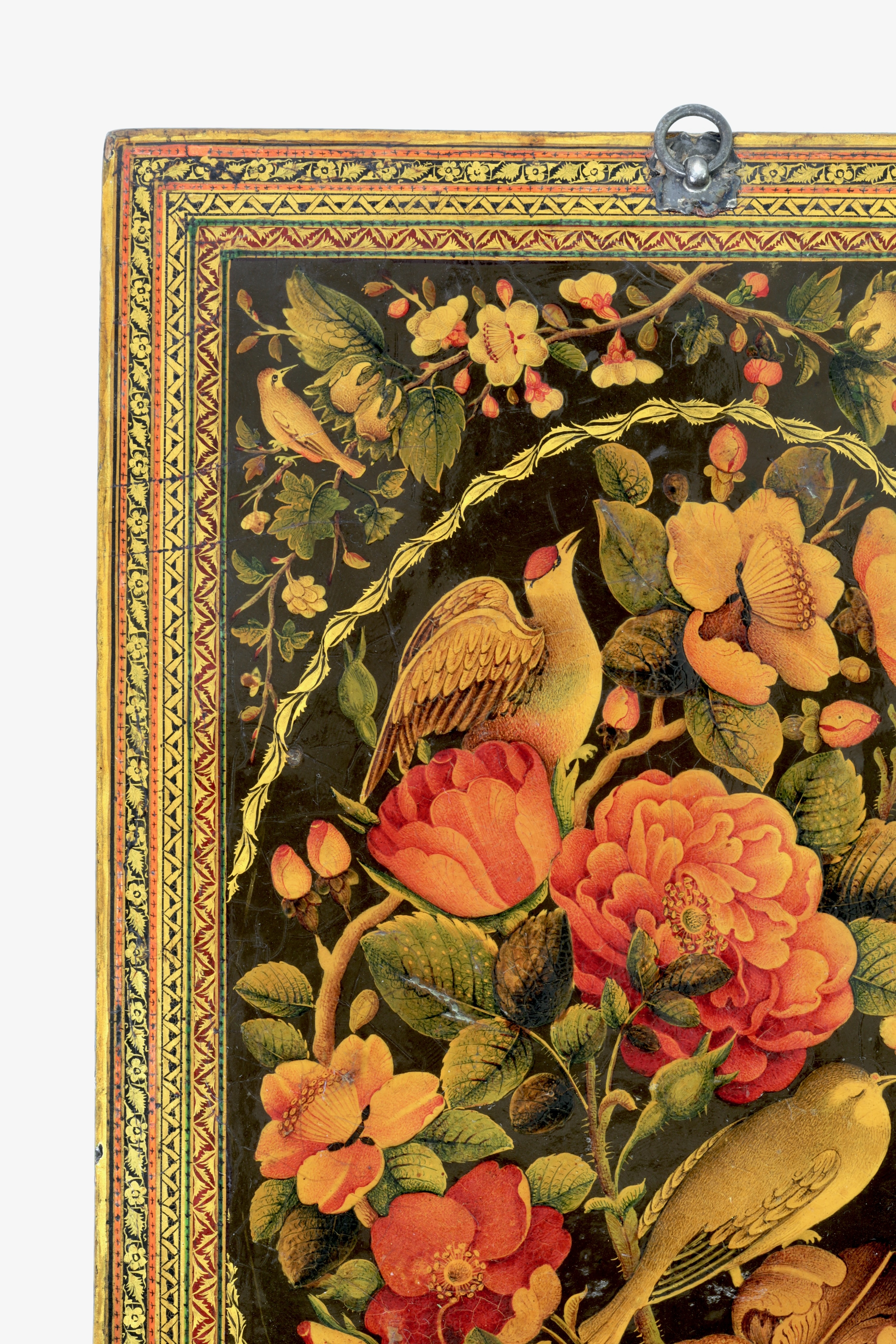 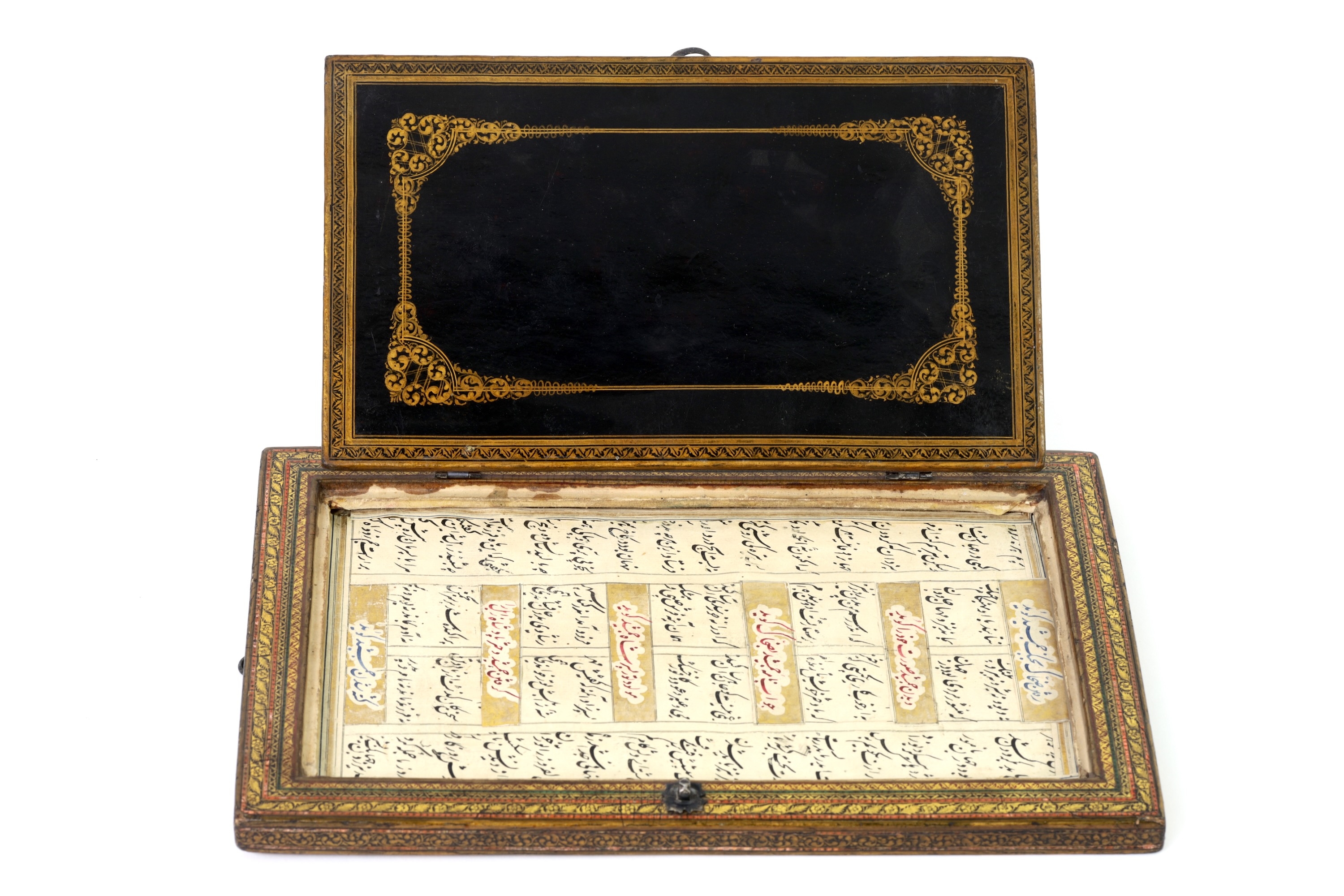 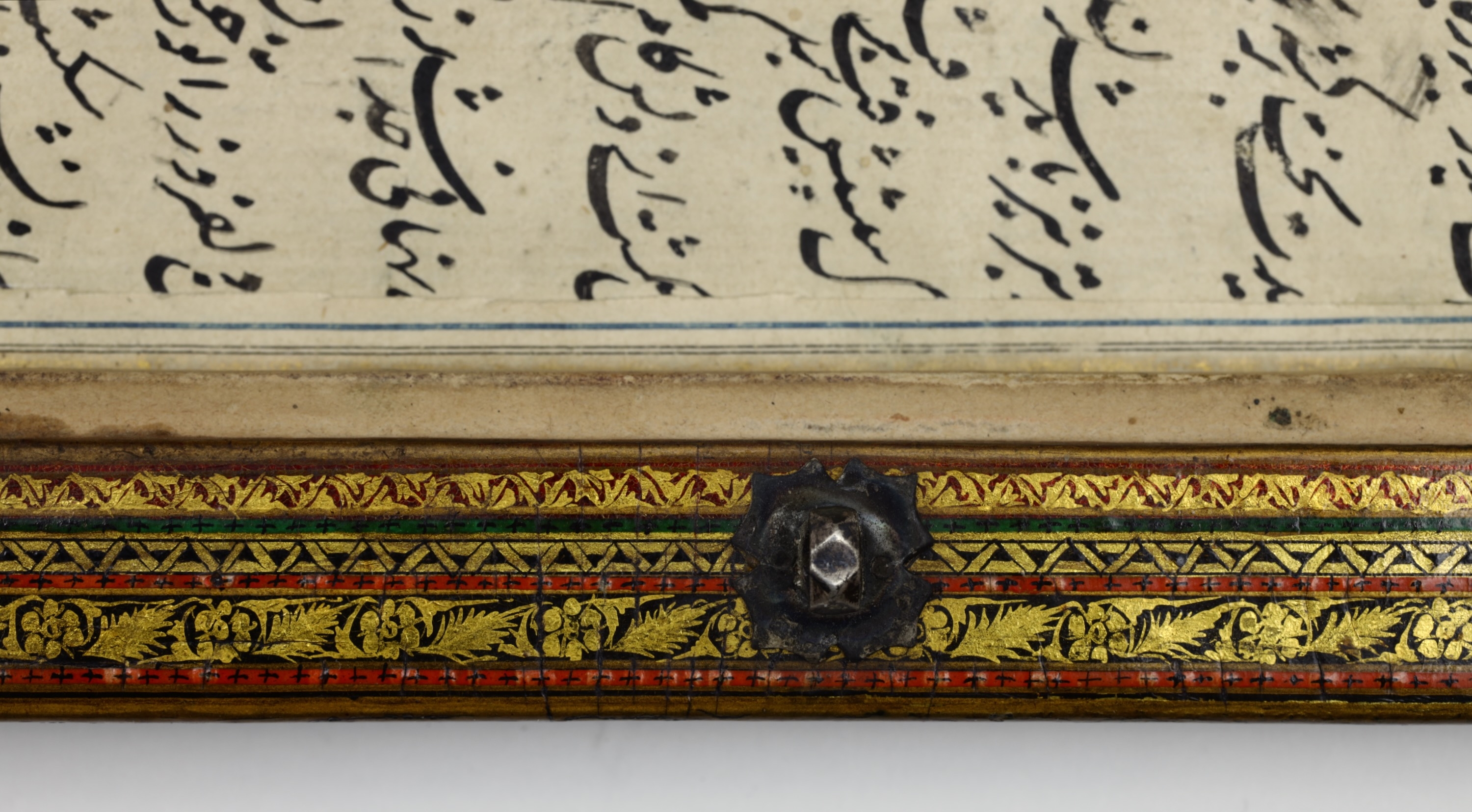 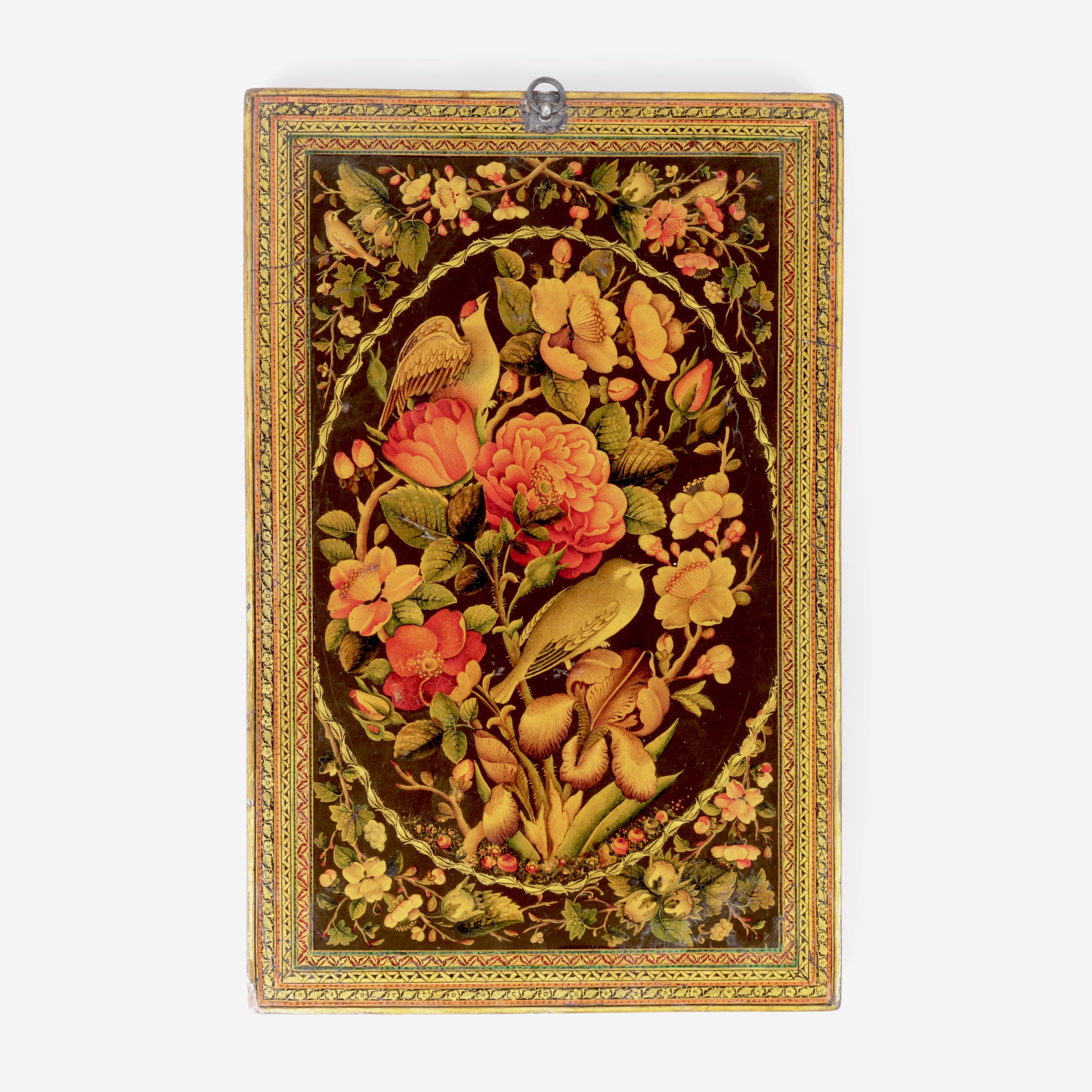