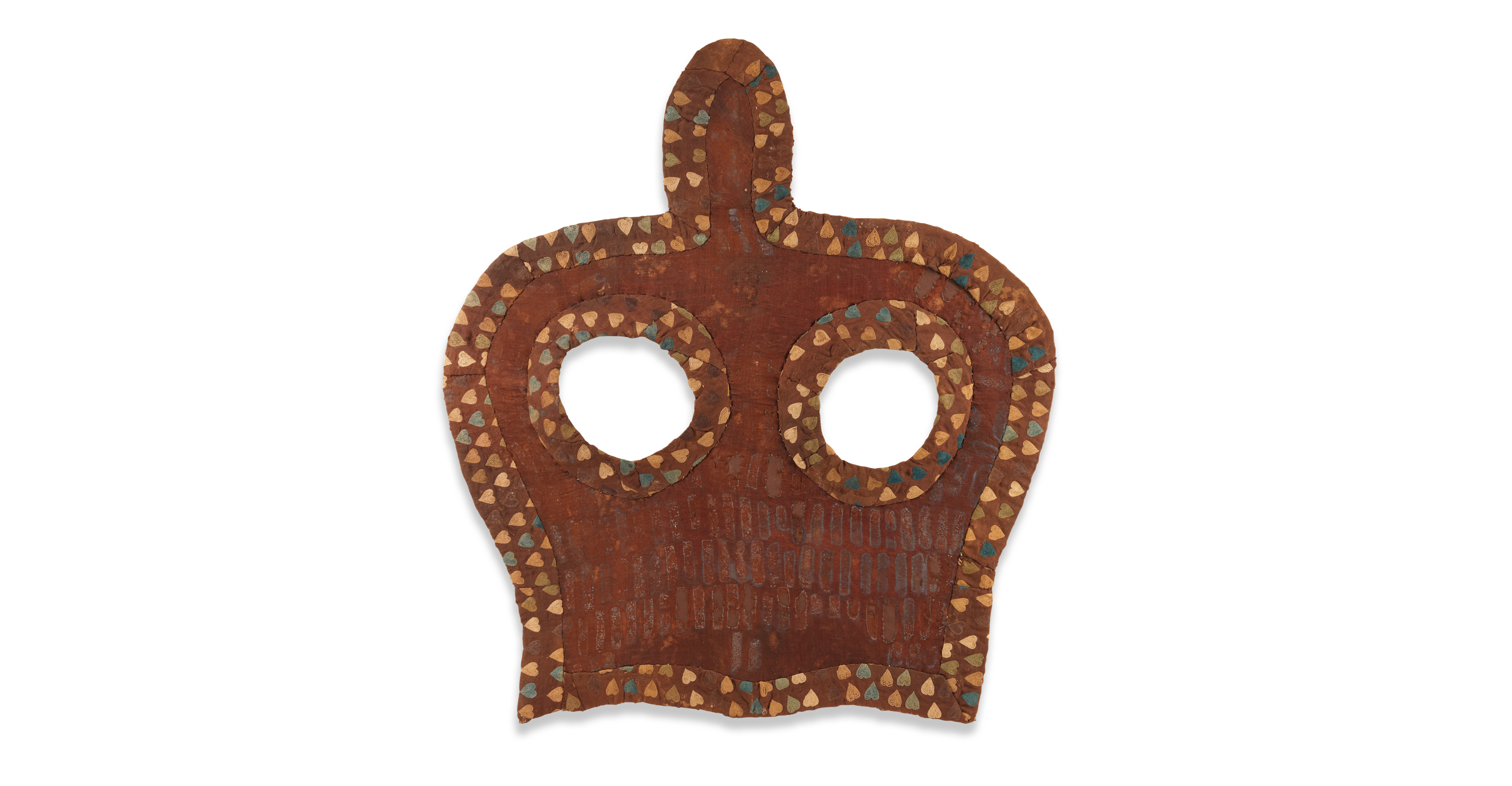 The Northern Wei dynasty (386-534 A.D.) was ruled by the Tuoba Xianbei, a clan of ancient proto-Mongolian nomadic people. It was situated in what is now Mongolia, Inner Mongolia, and Dongbei, also known as Manchuria. The Xianbei allowed thriving trade routes that lead to increased cultural exchange, commencing a time of rapid social and cultural developments.

It was, for example, the period during which Bodhidharma came from the West over the Silk Road and settled in Northern Wei territory, and introduced Chán Buddhism into China, perhaps more well-known in the western world as Zen. Chán Buddhism differed from earlier branches of Buddhism in that it did not revere any sacred texts and focused solely on developing the human mind to reach enlightenment.

A substantial portion of the silk road trade consisted of the prized silk, over which the Chinese still had a monopoly. By the 5th century, Chinese fabrics were found all across the silk road, even into Byzantium. It would still take two centuries for Byzantium to manage to start its own silk production, supposedly with smuggled silkworms.

A silk shaffron or horse mask. It is made finely woven of maroon-colored silk, with subtle designs of roundels woven into the fabric. These designs are typical for the Chinese silk that was found all along the silk road at the time. It is bordered with brown silk piping around the eyes and the circumference.

The borders, in turn, are embroidered with a multitude of heart shapes in shades of blue, yellow, and orange. These shapes are believed to represent leaves. Leaves of various kinds were popular on early Central Asian fabrics and also on golden headdresses.1 The distinct heart-shaped leaves on this shaffron may allude to the sacred Bohdi tree (Ficus religiosa) under which the Buddha attained enlightenment.

The part below the eyes was once covered with plates adhered to it, now gone. The absence of staining suggests the plates were probably made of an inert material like gold.

Red shaffron appear on period painted pottery statues of riders and horse. This one may serve as a padding for a protective plate. See for example: 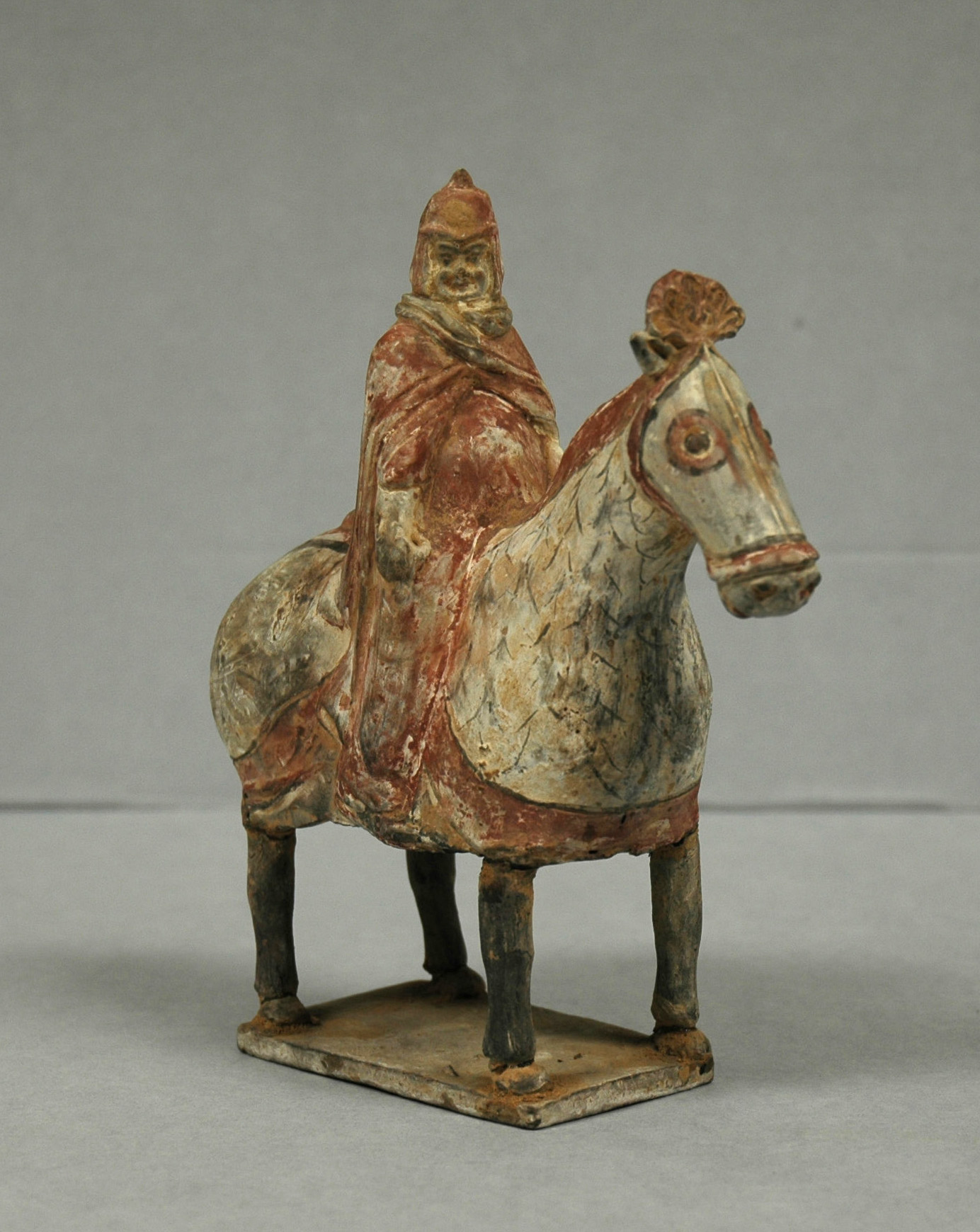 A very similar piece to ours is in the China National Silk Museum in Hangzhou. It also has these rectangular "shadows" of plates that were once attached and now lost. The museum also dates this to the Northern Wei, like ours. 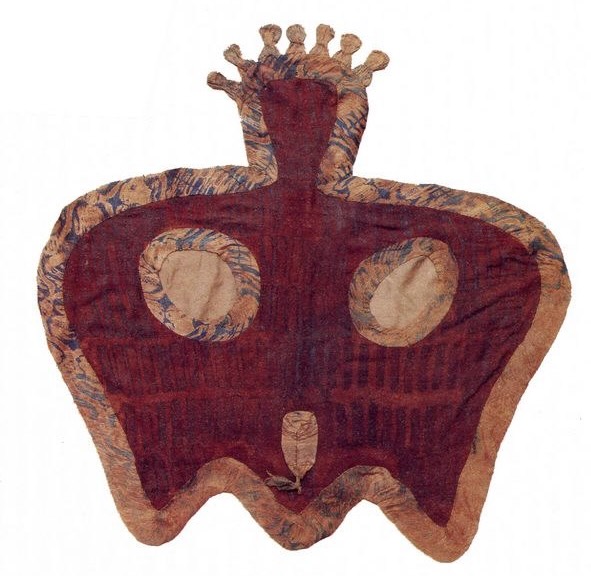 The Metropolitan Museum in New York has a wonderful, slightly later central Asian shaffron that dates to the 5th-7th century A.D. 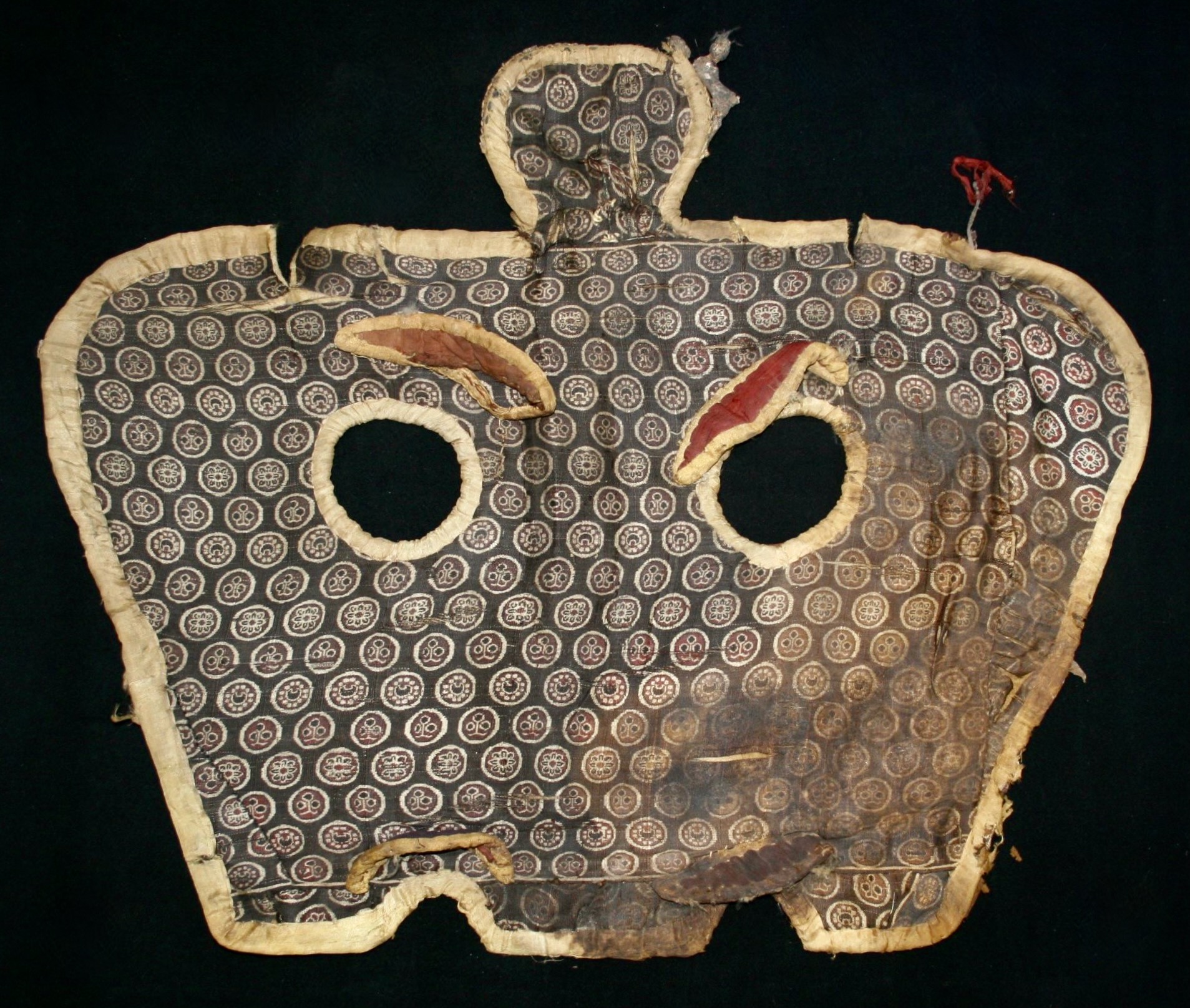 Silk shaffron of the 5th-7th century.
Central Asian. Notice the roundels that bear a resemblance
to the ones woven in the fabric of the current example.

A lacquered panel from the tomb of Sima Jinlong, dated 484 A.D. Sima Jinlong was a Xianbei prince and general of the Northern Wei. It shows the colorful dress of courtiers of the time, with a prevalence of red fabric. We can also see repetitive decorative elements, probably embroidered like the hearts on our shaffron.

Lacquer screen, from the tomb of Sima Jinlong who died in 485 A.D.
Unearthed at Datong, Shanxi. Now in the Datong Museum.
Dimensions: 80 x 20 x 2.5cm

And finally, a piece of fabric with a remarkably similar pattern to the main fabric on our shaffron was published in 1972.2 It has similar roundels and is referred to as tào huán “guì” zì wén qǐ (套环贵字纹绮) or "Qǐ pattern with roundels containing the character guì". Guì means "expensive". The somewhat dated catalog puts the fabric in the Northern dynasties period (420-589 A.D.) to Sui (581-618 A.D.) period, modern scholarship suggests it originates from the earlier part of that date range. 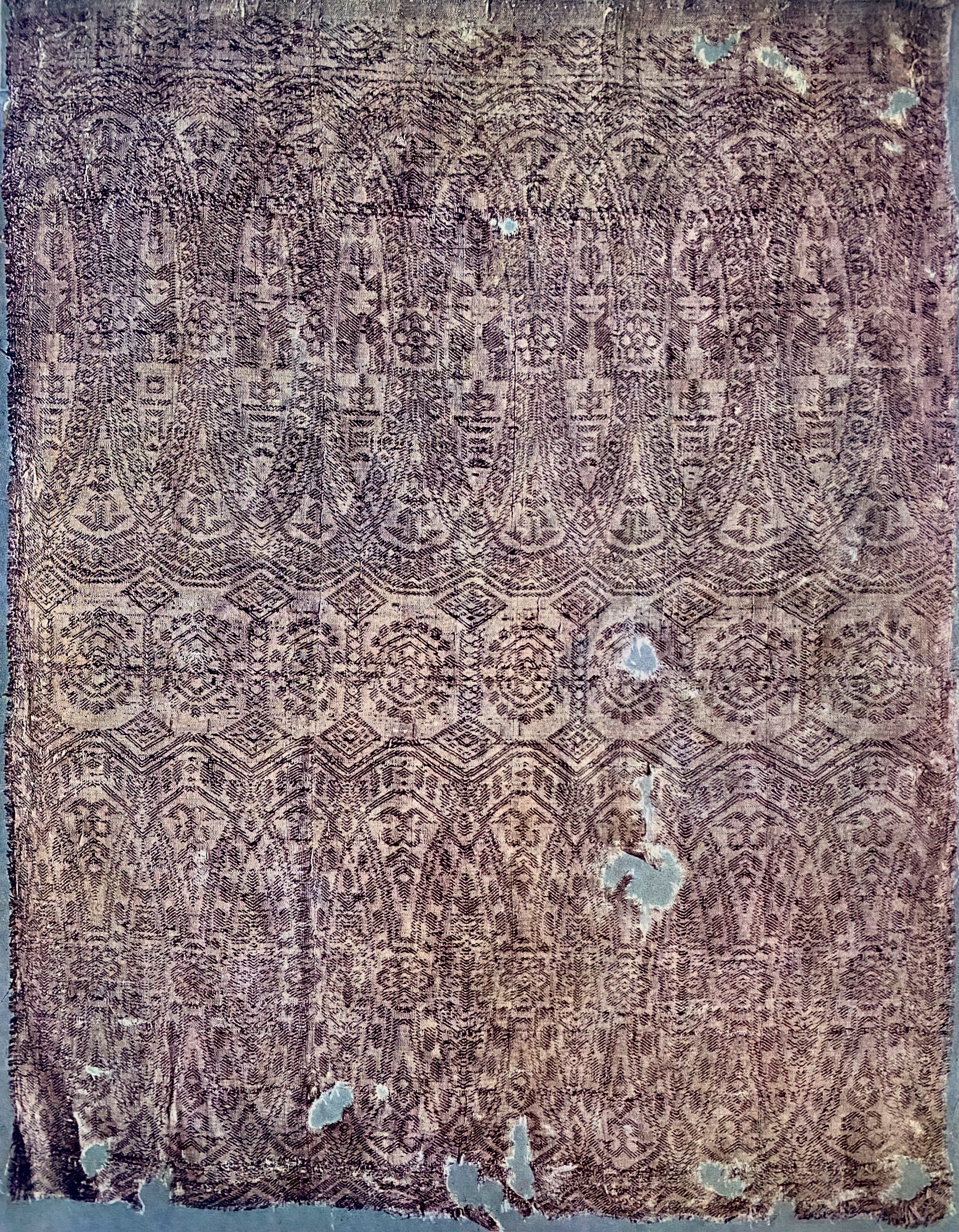 The shaffron is professionally mounted on white cotton. Maroon-colored fabric backing was used to mask some holes; see photos. The whole is framed by Sainthill frame makers using ArtGlass AR 92 with 92% UV protection. It was framed using clamps so that the piece can easily be taken out for closer inspection.

Notes
1. Sarah Laursen; "Leaves that Sway: Gold Xianbei Cap Ornaments from Northeast China" (2011). Publicly Accessible Penn Dissertations. 304. Also see a golden crown with pearls and inlaid stones from the Khokhlach Kurgan in Russia referenced in the dissertation: Hermitage Museum (SK 367) (Abbaye de Daoulas, L’Or des Sarmates, 59, Cat. 86).
2. The Silk Road, fabrics from the Han to Tang dynasty (絲綢之路 汉唐织物). Edited by the Museum of the Sinkiang Uighur Autonomous Region and the Group in Charge of the Exhibition of Cultural Relics. 1972. 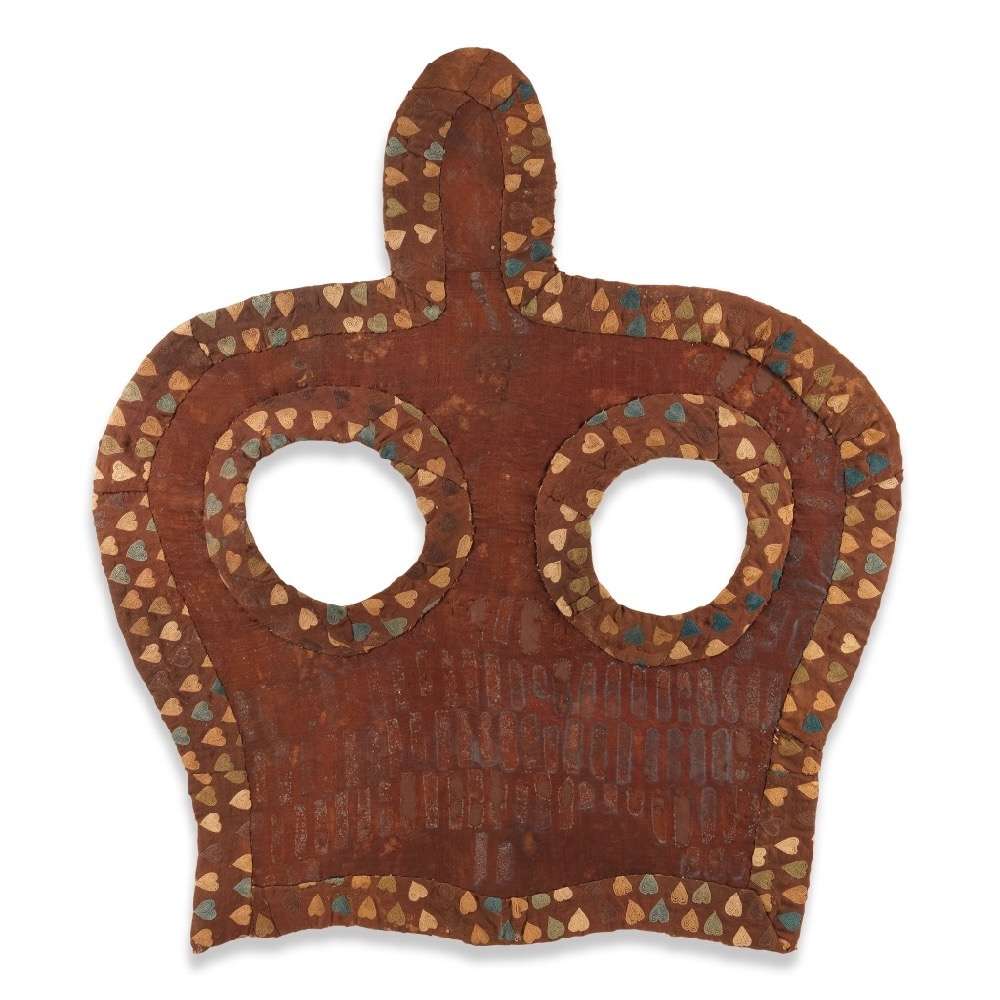 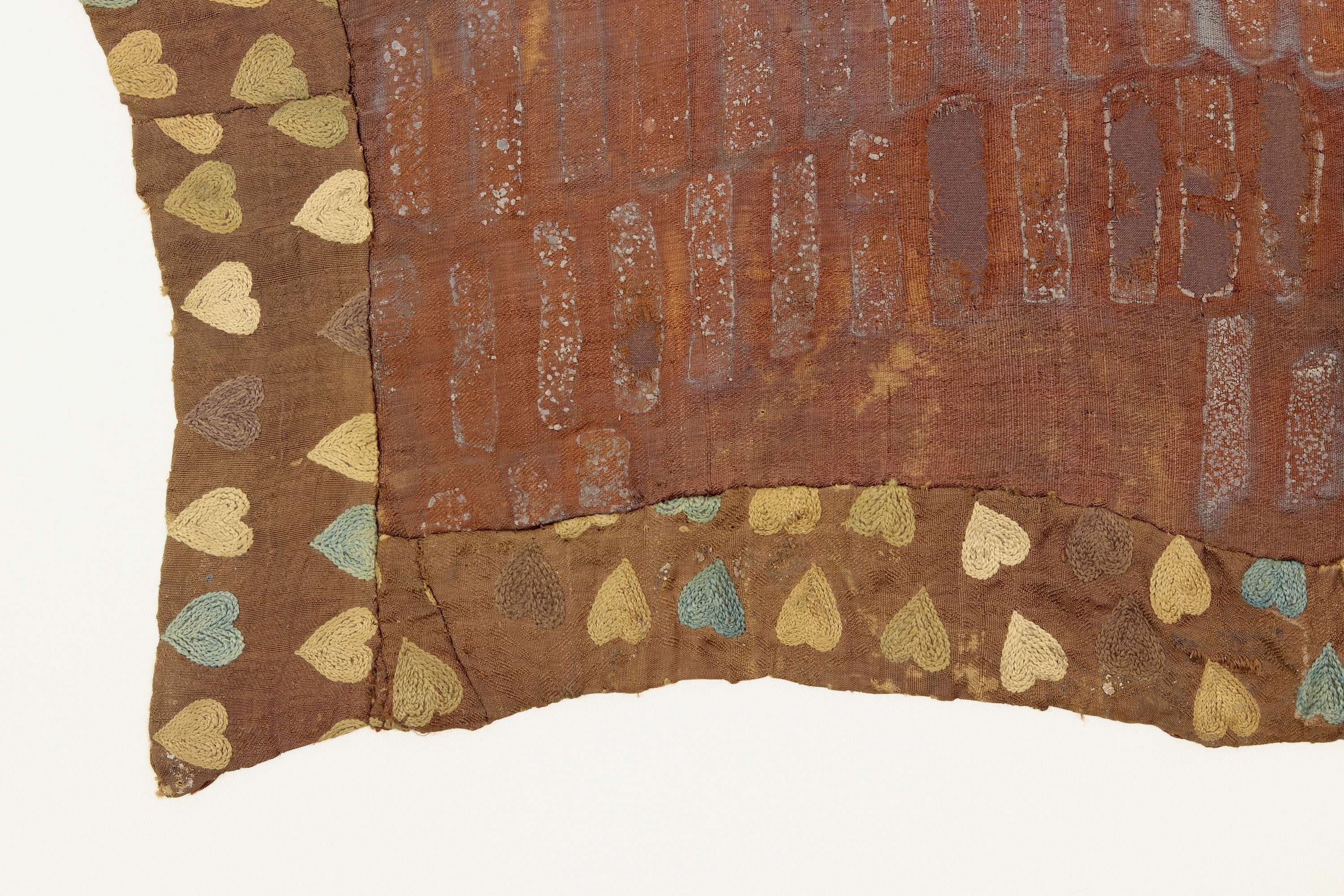 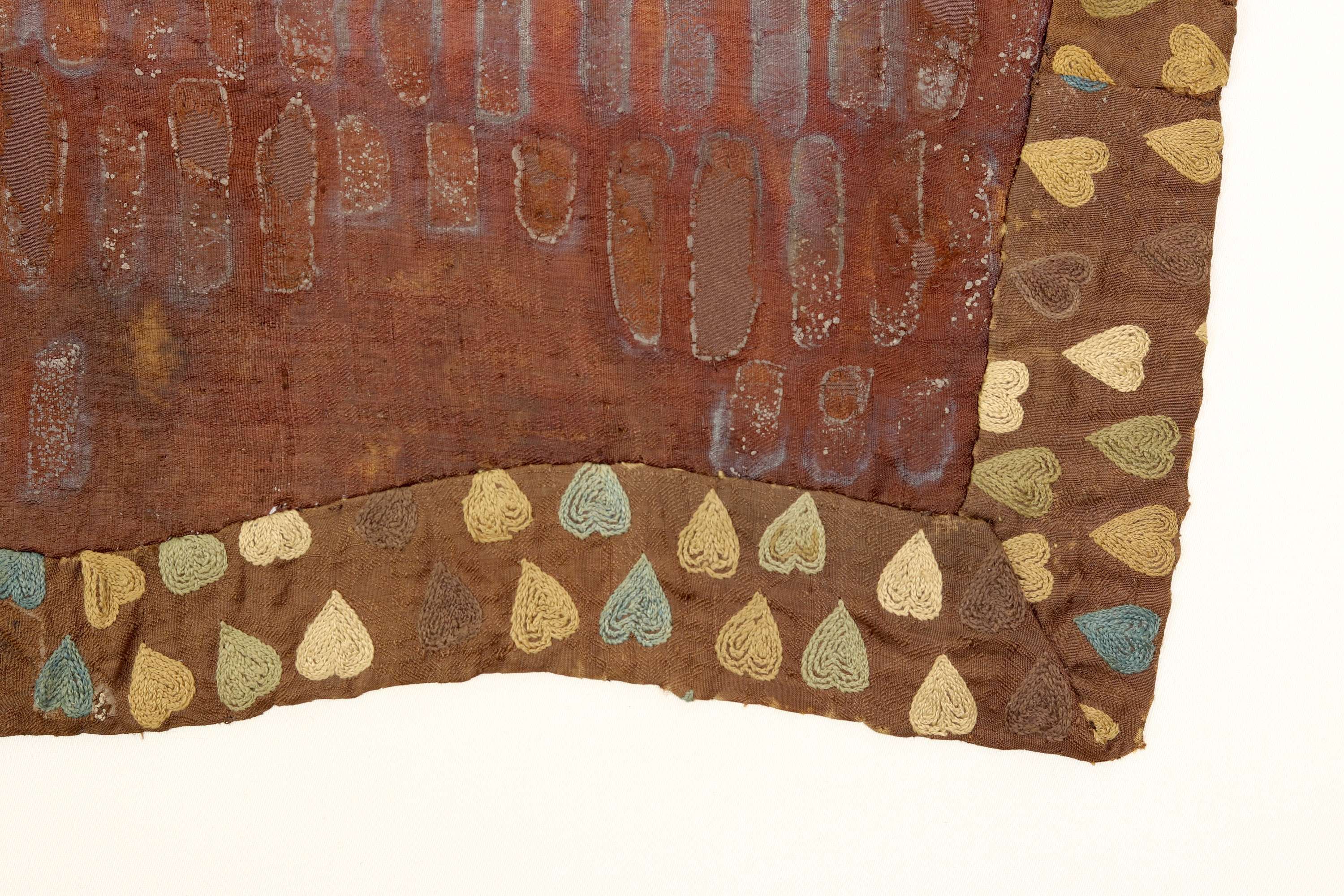 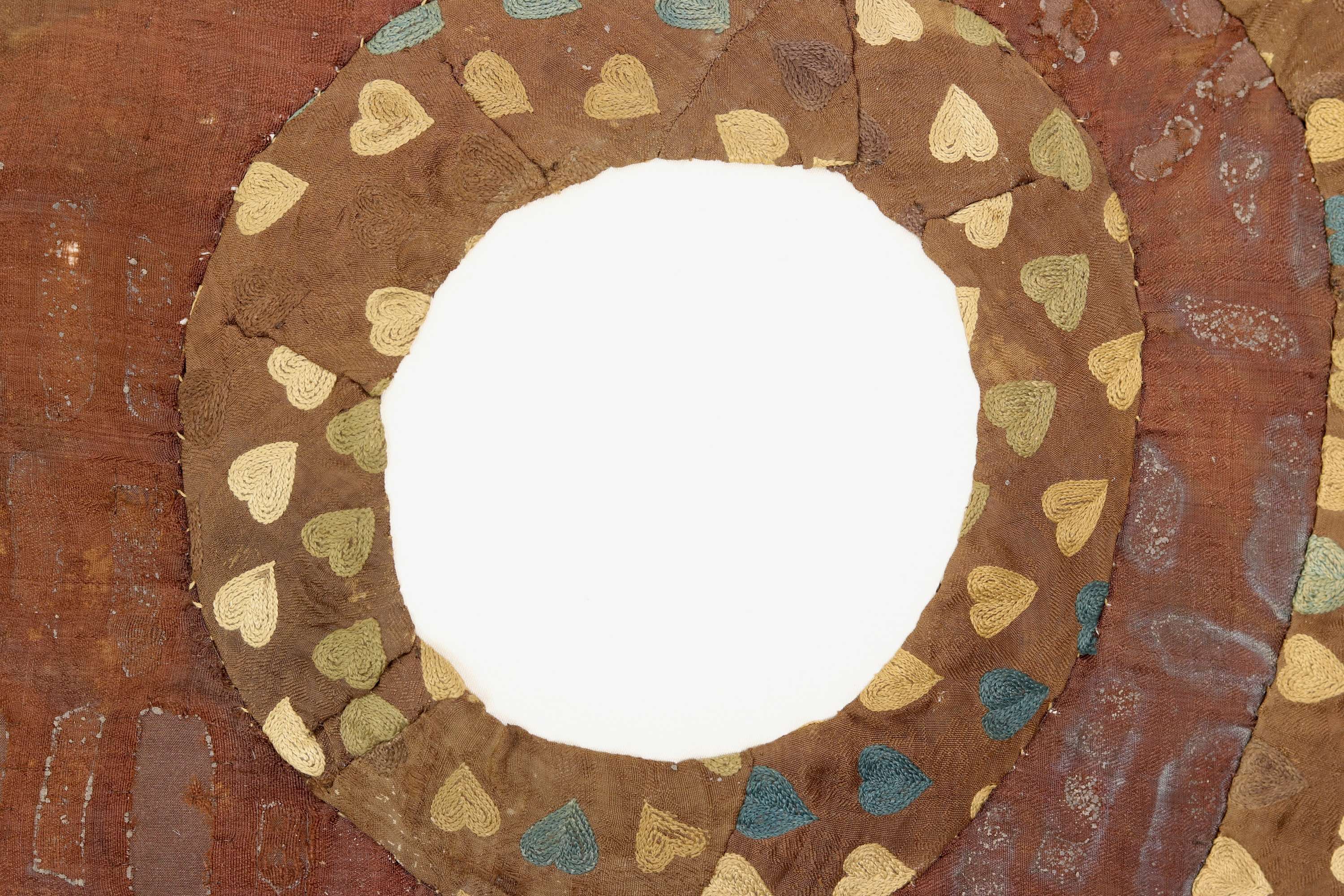 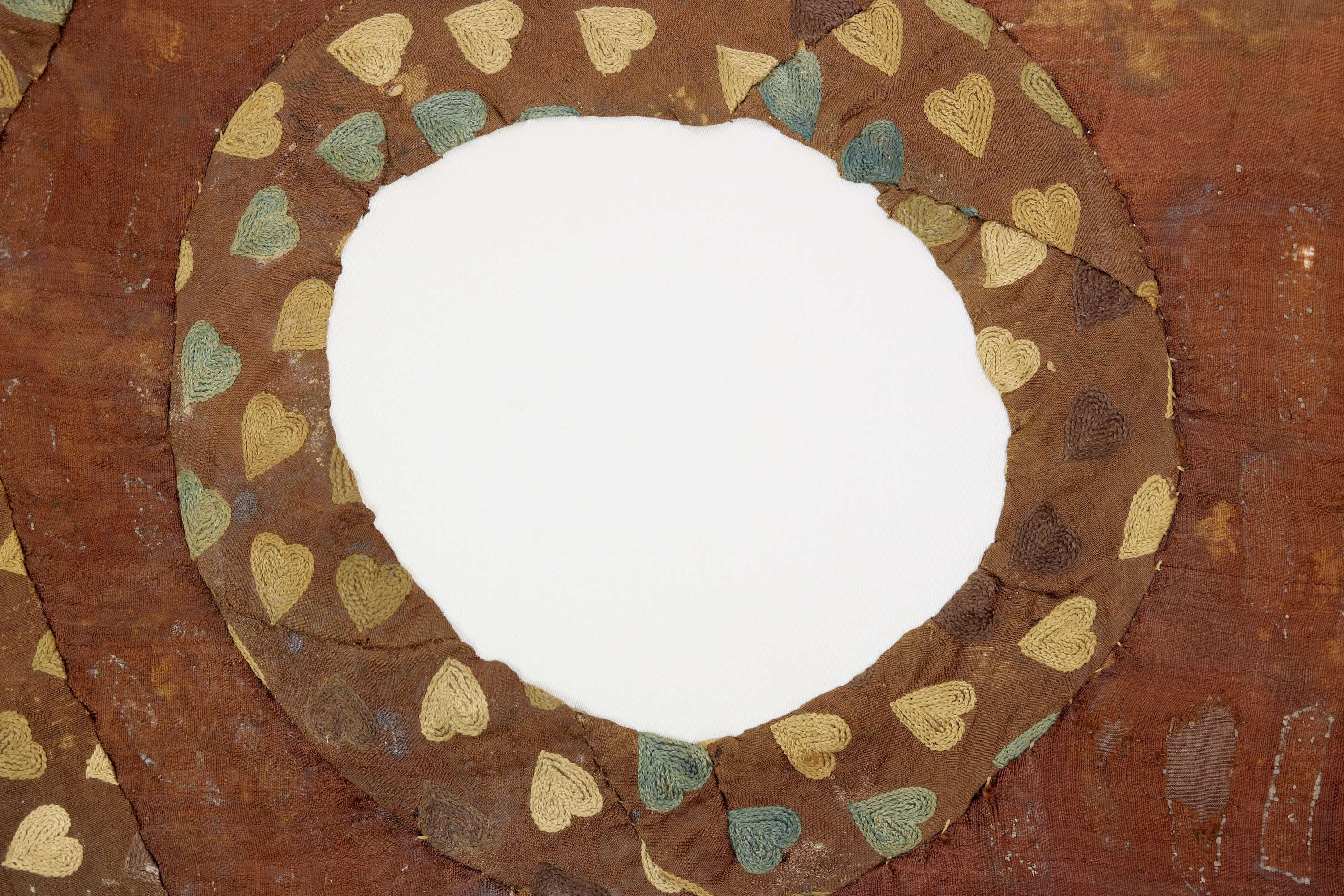 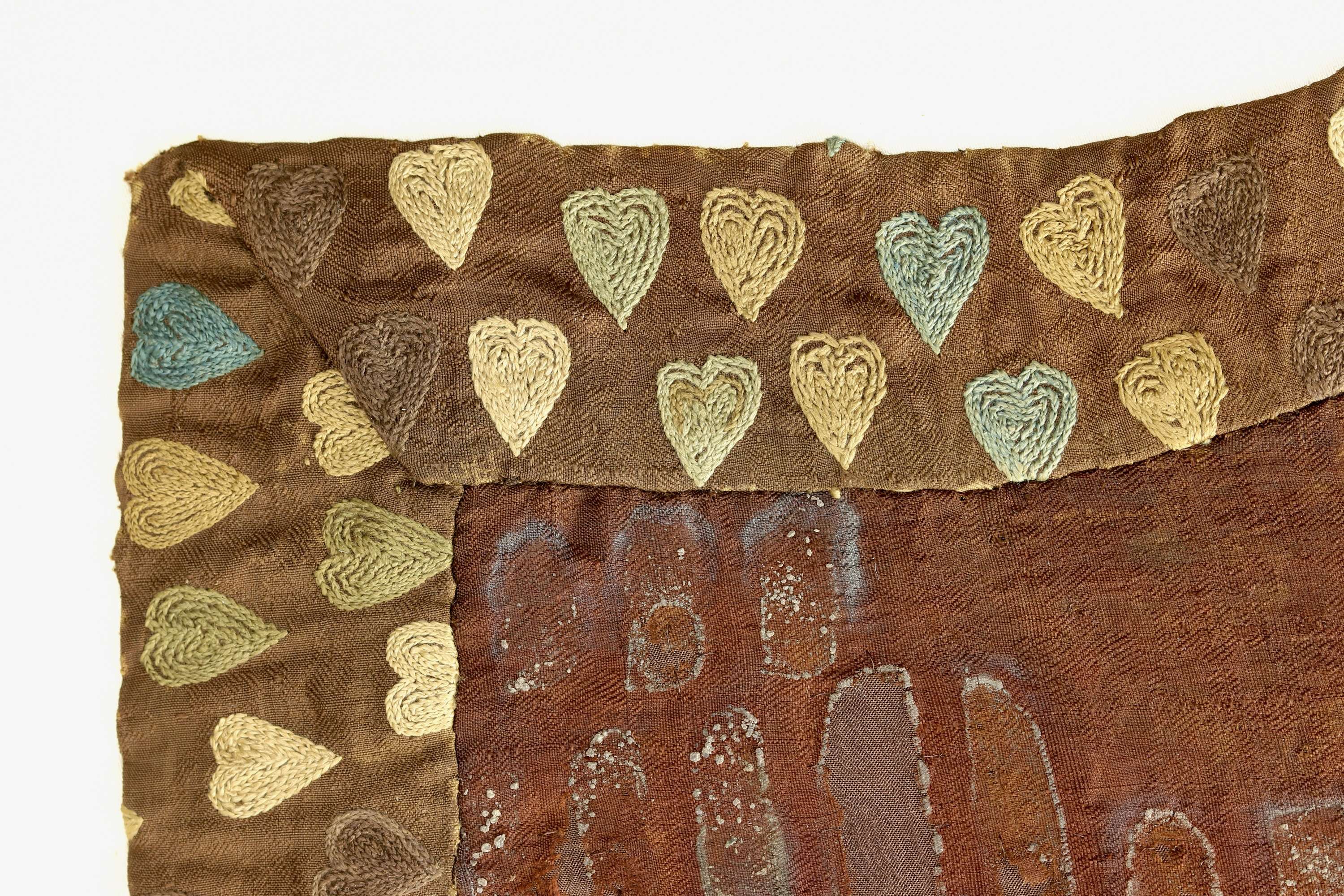 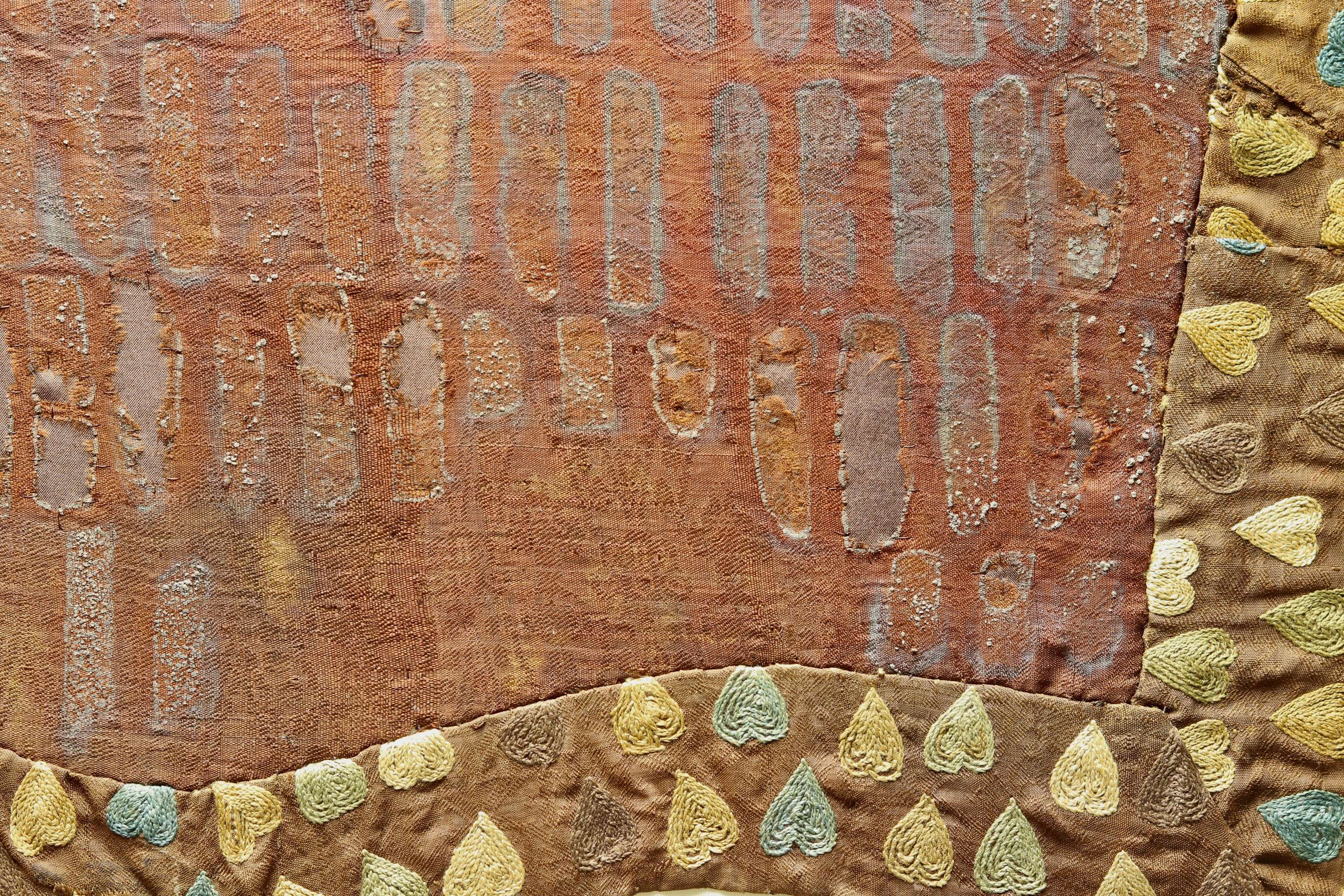 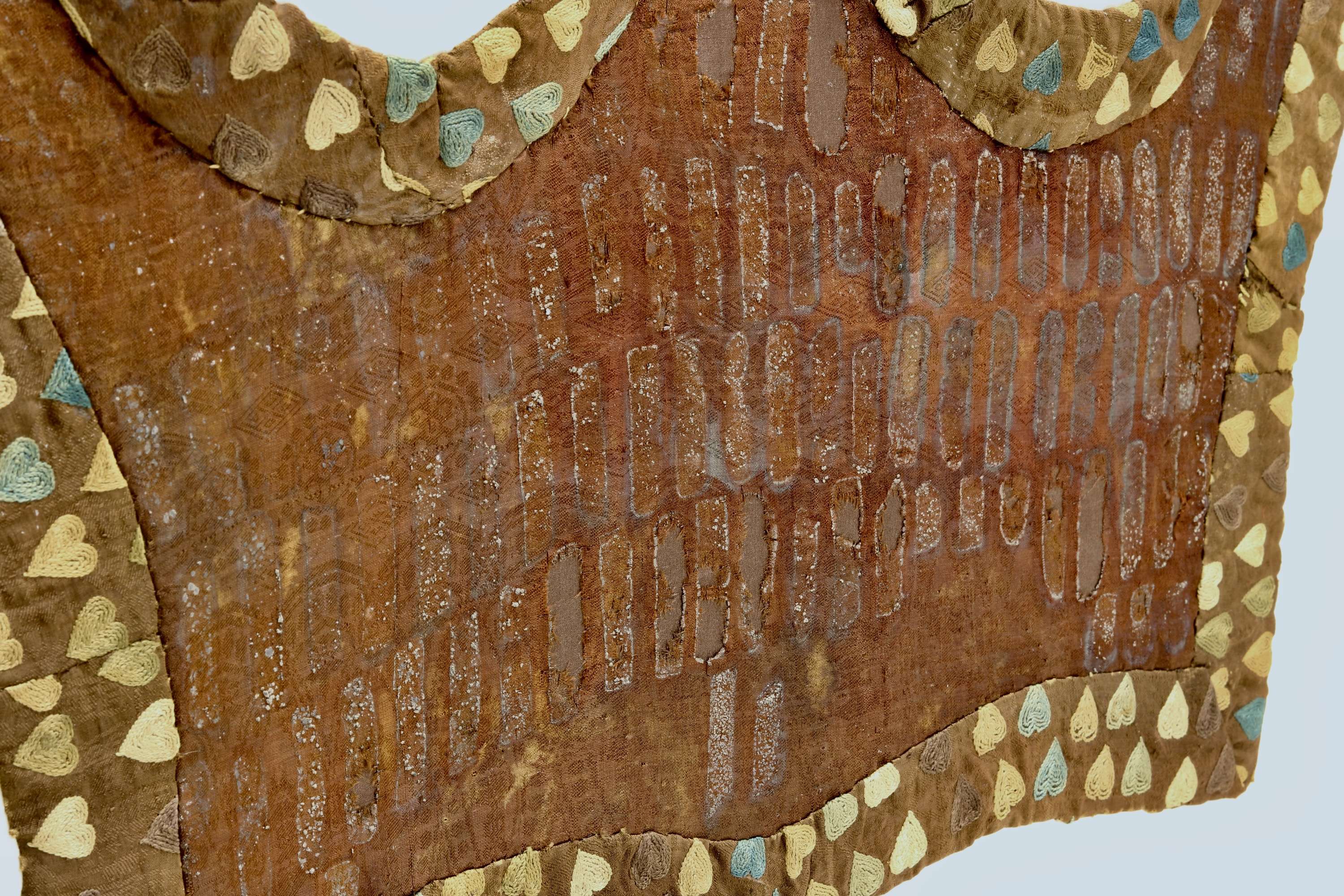 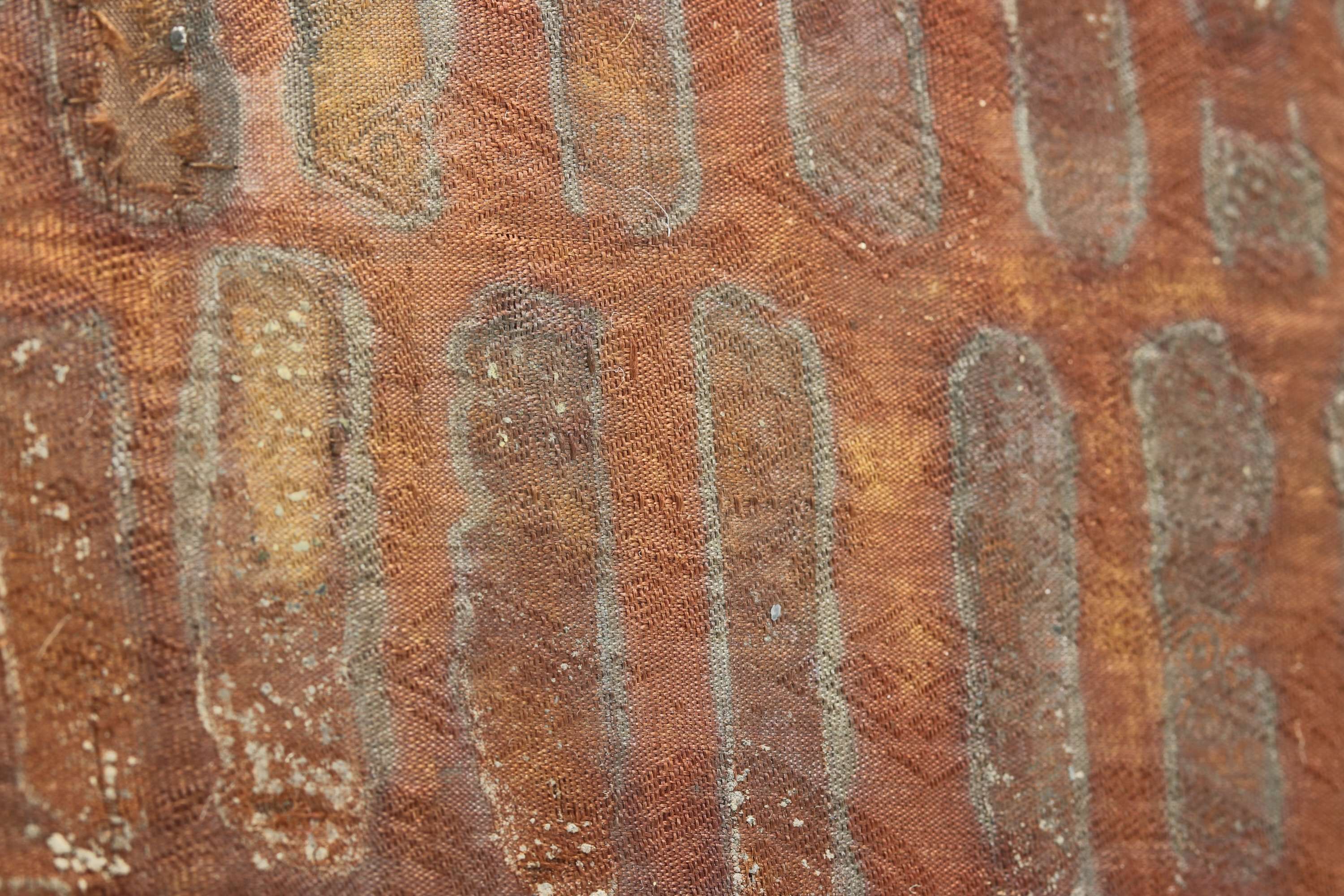 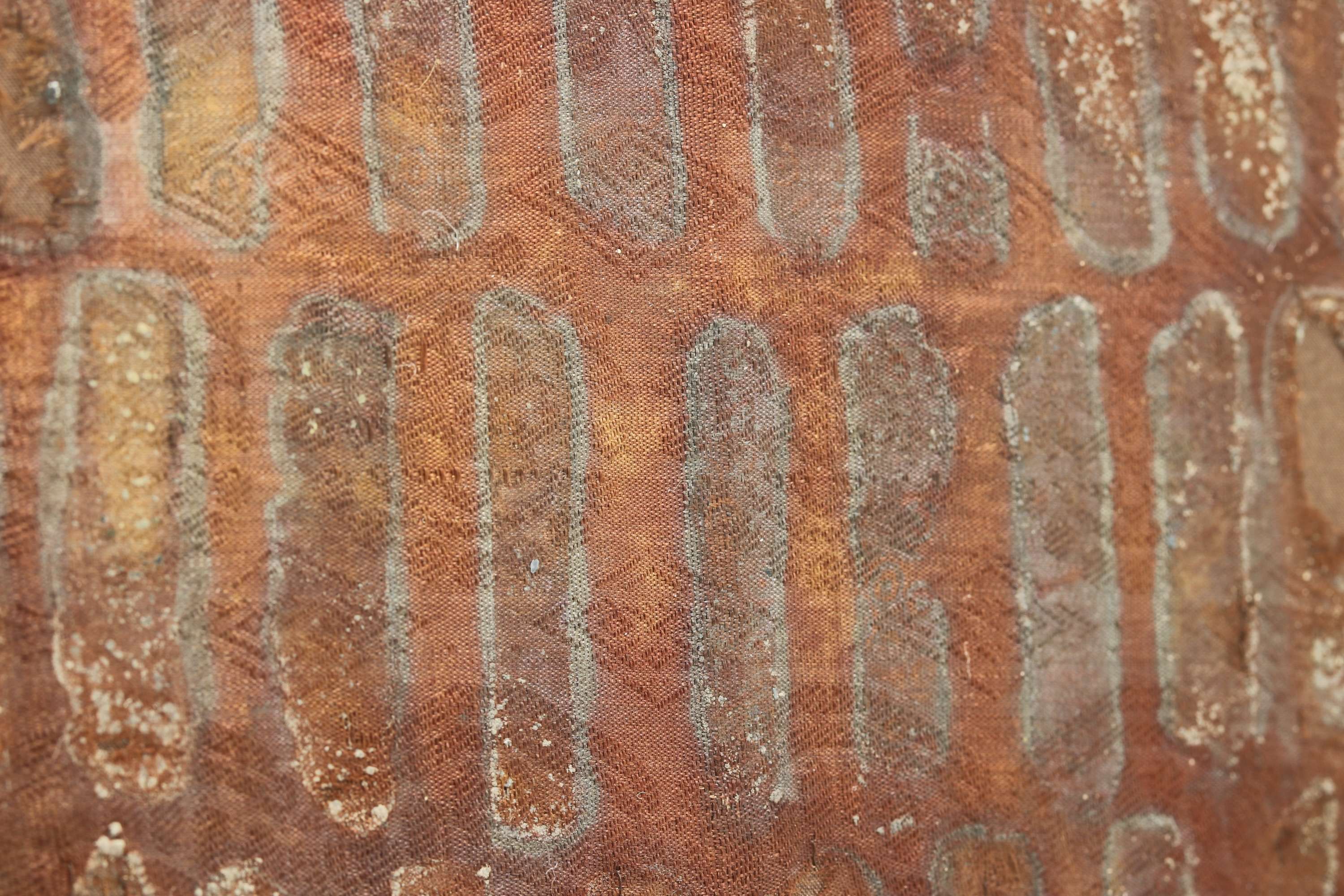 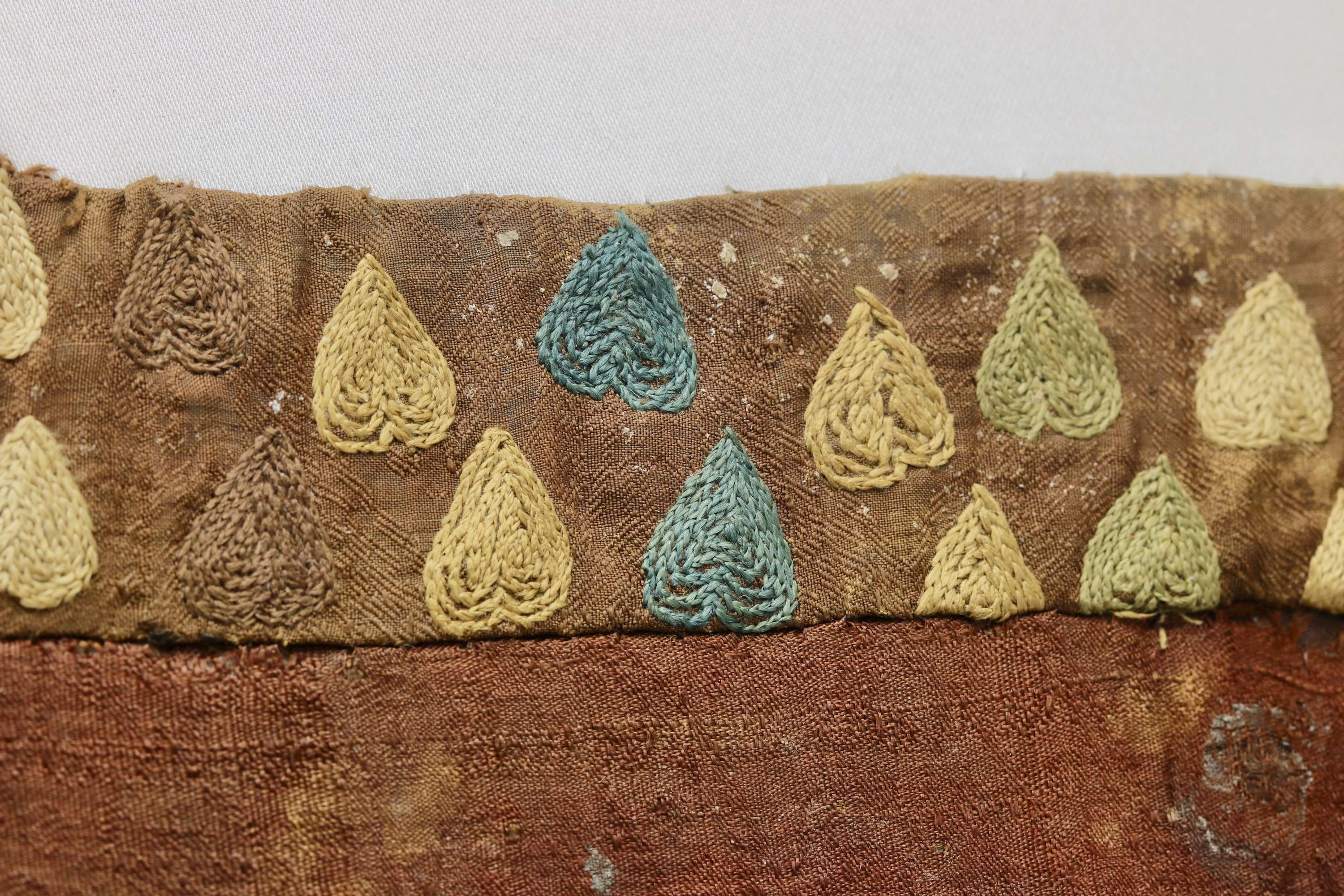 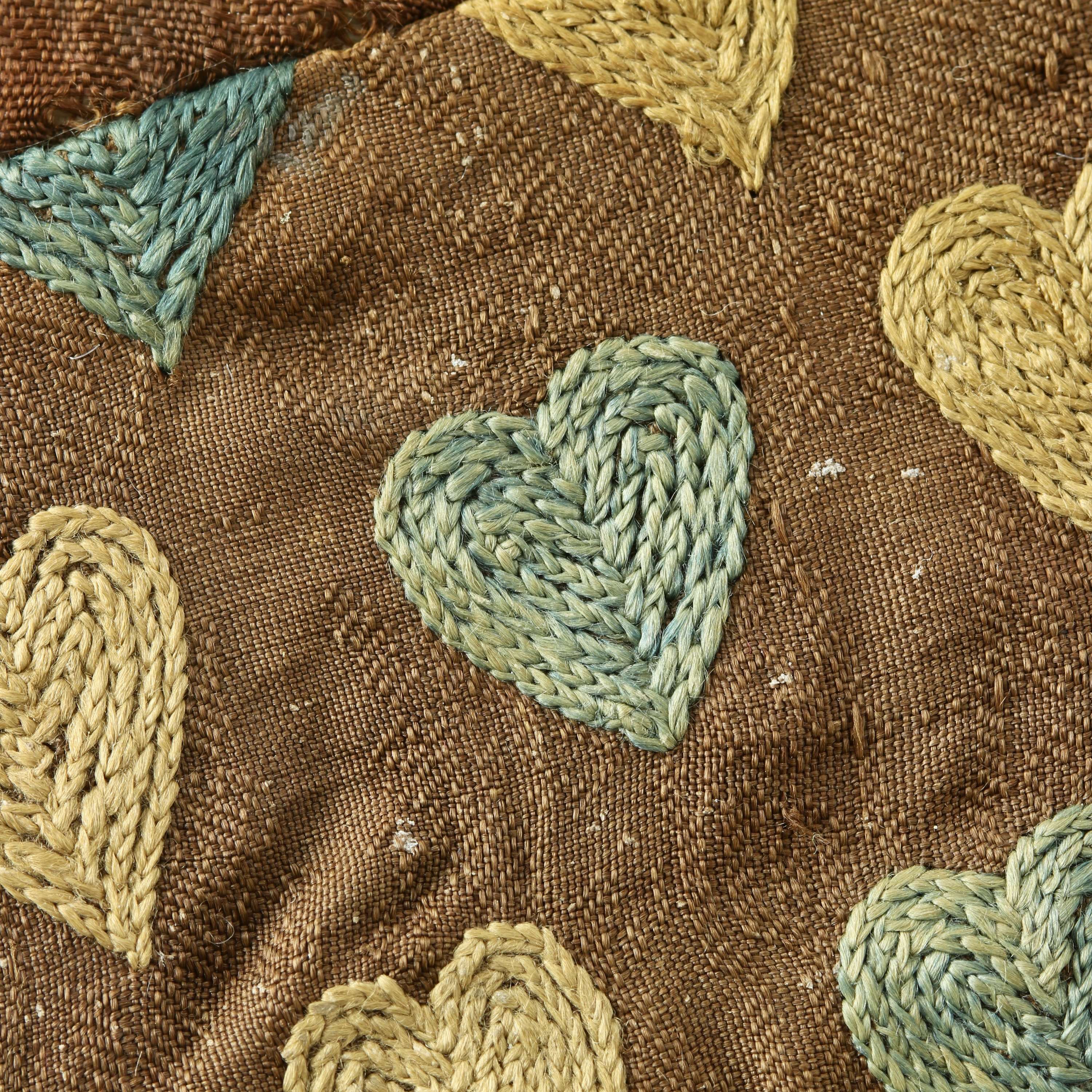