The best carving in ivory was done in Moulmein (Mawlamyine) in the southern stretch of Burma with some "fairly good work" done in Pyinmana in central Burma. There had also been a carver active in Rangoon (Yangon), but by 1900 he had retired and outsourced orders to Moulmein.1

The entire industry in Moulmein consisted of only 8-12 tusks a year.

In Moulmein, the ivory is procured chiefly from Shan traders and occasionally from the local timber mills, or the Commissariat Department when an elephant happens to die or break its tusks.2

Articles are not manufactured in anticipation of the demand, but solely to meet orders received.3

A somewhat short Burmese dha with an ivory hilt. The steel blade of typical form, narrow and with a gradual widening towards the tip section and a false backedge running about 2/3rd of the blade length. A narrow groove on either side is crosshatched and decorated with scrollwork in silver wire. According to Bell, such swords were made much like Japanese swords with an outer casing of steel around a softer iron core.4

The hilt consists of an ivory grip section with silver pommel and silver ferrule. Pommel and ferrule are both worked in repousse in traditional Burmese floral designs, the back of the pommel is decorated with a large star and five smaller stars surrounding it.

The grip section is finely carved with a tall, bearded figure holding his long mustache. Above his head is another face that appears to wear the pommel as a hat. It has what appear to be ruby eyes.5

At the back of the grip section is another seated figure, the rest of the decoration is floral in nature.

The wooden scabbard is entirely clad in silver, consisting of six segments with ribbed bands covering the seems. The surface is engraved with Burmese floral designs around a series of cartouches on either side. At the top of the scabbard is a plant fiber cord, covered with deep green silk velvet.

A charming Burmese dha that makes use of high-end materials and decorative elements, while none of the work represents the best of what the more metropolitan Burmese craftsmen could do. I, therefore, believe it was probably the sword of some local chief, or otherwise a Burmese of some means and status but in a smaller, rural community.

The ivory carving has a nice strong presence yet not the fine carving described as being done in Moulmein. Perhaps this is an example of the work done in Pyinmana.

Notes
1. H.S. Pratt, I.C.S.; Monograph on Ivory Carving in Burma, Rangoon, Printed by the Superintendent, goverment Printing Burma, 1901. (Written in 1900.)
2. Ibid.
3. Ibid.
4. E.N. Bell I.C.S.; A Monograph on Iron and Steel Work in Burma. Rangoon, Superintendent, Government Printing Burma, 1907.
5. Given the fact that 90% of the world's rubies come from Burma's "Valley of the Rubies" in Mogok, these might actually be rubies. 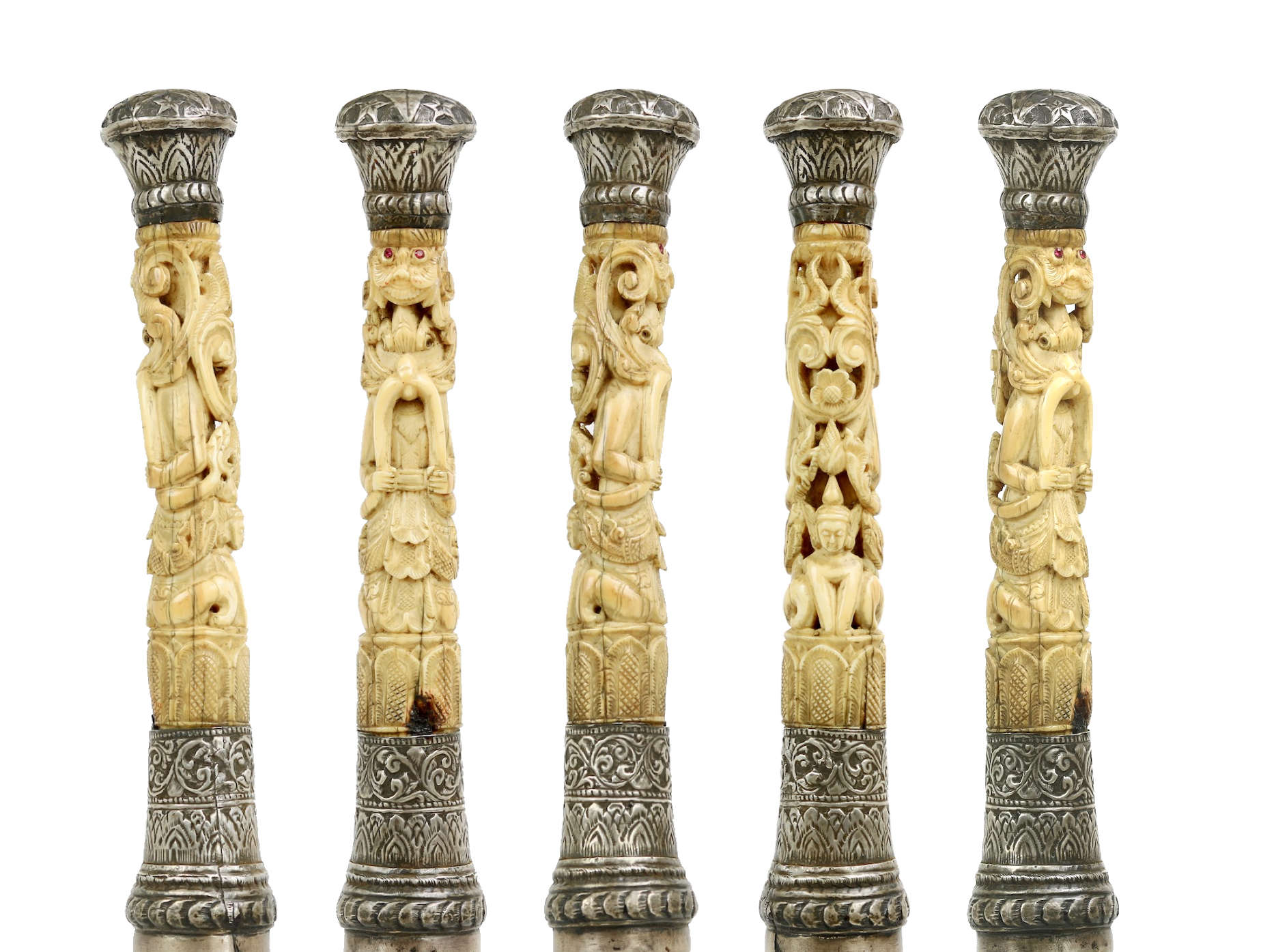