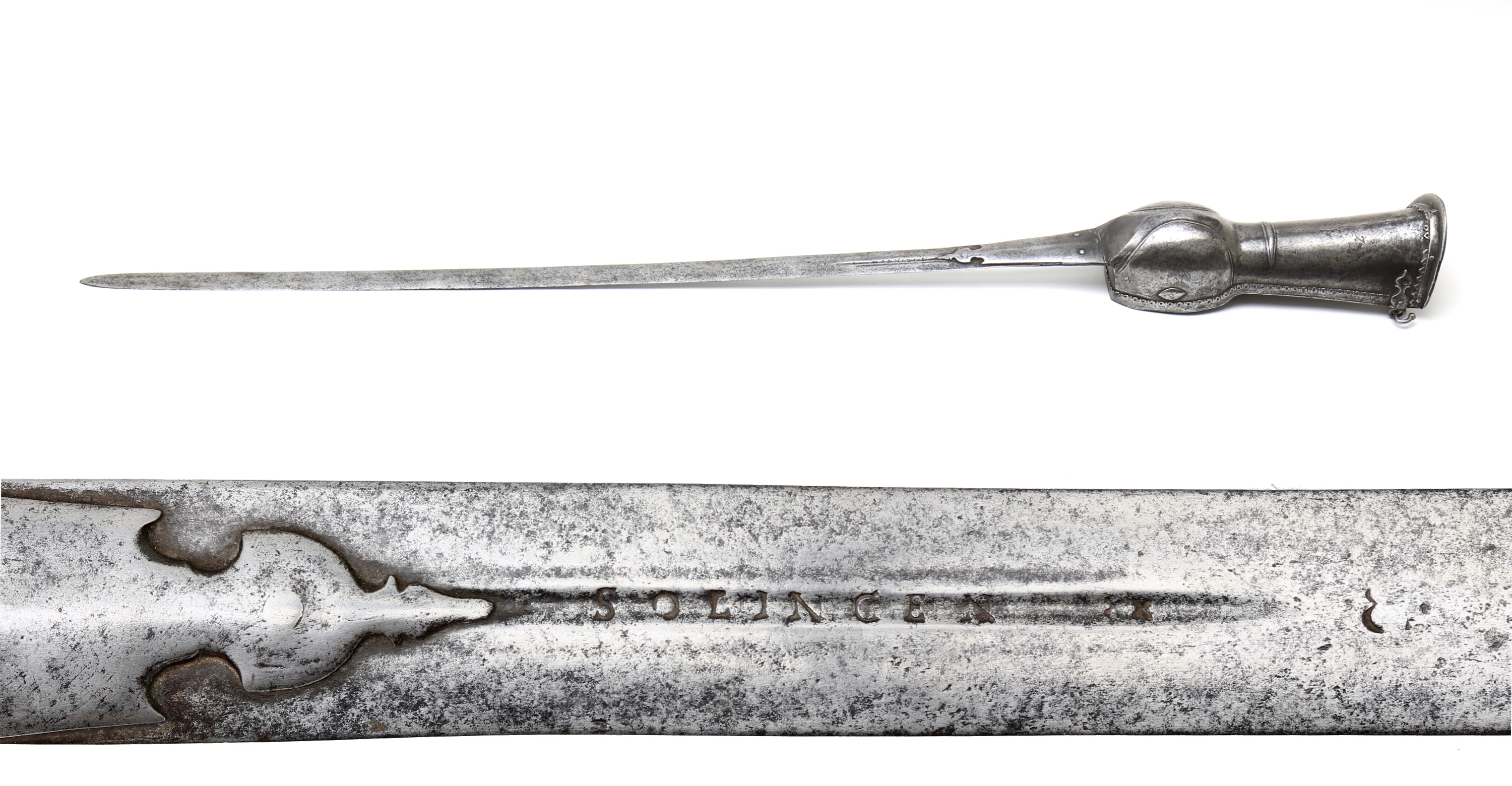 The patá is a large gauntlet sword, sometimes found with European import blades like this one. It is strongly associated with the Maratha who call it dandpatta.1 The Maratha empire (1674-1818) rose to prominence in the 17th century and defeated the long-established Mughal empire in the North. Its use was however not confined to the Marathas, and is described in use by many people of India:

"The huge gauntlet swords -Patta- used by the Nagas or military monks of Jeypore,
and by Mahrattas, have large steel gauntlets."
2

"Used by the Sikhs in their sword play, and by the Mohamedans at the festival of the Mohurrum. Also by Mahrattas of Southern India." 3

For more information on patá, see my glossary article: Patá.

A large patá with a European riding sword blade, made around the mid 17th century. The large, flexible blade of lenticular cross section has three grooves on its base with markings in the center groove.

Solingen on the top of the blade, Knegt on the bottom, with on both sides remains of what appears to be an anchor shape.

Other very similar blades have turned up in schiavona hilts, a sword popular mainly in Italy in the 16th and 17th centuries. One is in the depot of the Klingenmuseum in Solingen, dated second half of the 17th century. Another showed up on the antique arms market years ago. These are signed "GIO KNEGT", and ours is probably too but the "GIO" is now hidden under the hilt's langet. Gio is a romanization of Johann, Knegt is a last name that also means "servant". Gio Knegt does not appear in lists of known Solingen makers so he was probably a grinder or merchant who mainly catered to the Roman speaking areas, which is why he romanized his own name on these blades and why we find them on Italian swords.1

European import blades were prized possessions, primarily in the 17th century because they offered a kind of lightness and flexibility that could not yet be achieved with local steel. Wootz for example is an excellent steel that can take an impressive edge but it was brittle compared to the better European swords, and therefore unsuited for very long and thin straightswords. Indian sword makers would catch up soon though, and by the next century they could themselves make such blades as well, of forge folded steel.

The blade is held between two thick langets with pronounced center ridge for added rigidity, riveted in place with three rivets. Small cracks on either side of the langets attest to the considerable forces the hilt has been subject to through use. Despite, them, everything is still solid.

The gauntlet itself is made of fairly thick steel, polished bright on the outside and with patination and hammer marks on the inside. The edges are strengthened with a band of metal with decorative piercing and engraving.

The handle bar is riveted in place with two rivets, each with an eye-shaped washer. The wrist is further confined with an arched bar that is attached to two rings, which are in turn riveted to the gauntlet.

There is no fancy decoration but it shows attention to detail in its geometry, and the whole is of a sturdy, businesslike construction.

A good example of an earlier fighting patá of the 17th century with a European, Solingen-made blade that was highly prized in India at the time.