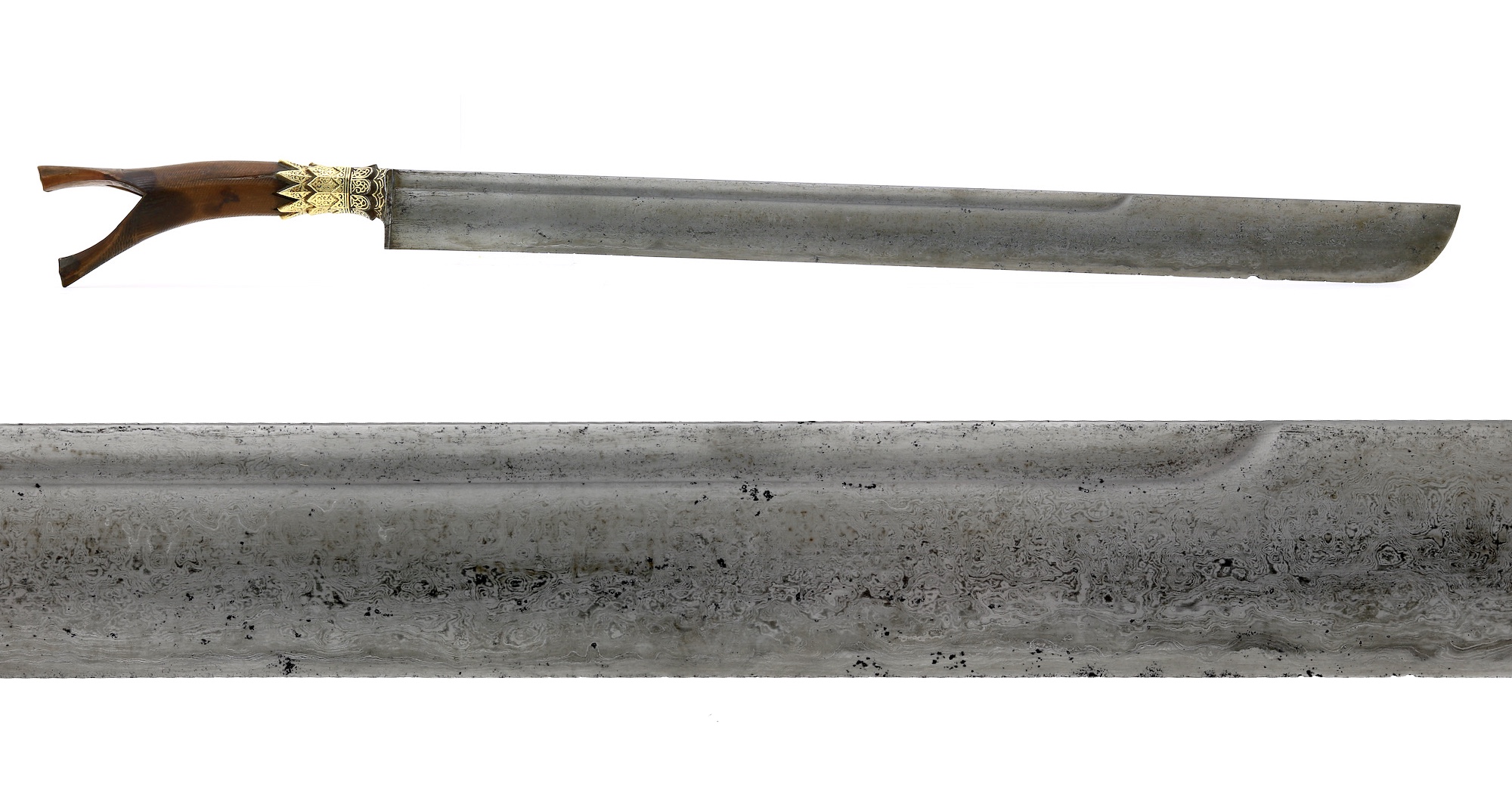 The sikin panjang was the standard fighting sword for the Acehnese. It has a single-edged, straight blade, and a forked, horn hilt.

“Persons of position or those who are going on a journey carry in addition the Achehnese sword which is the ordinary weapon used in fighting.
It is of uniform width from end to end, and is placed in a sheath.”
1 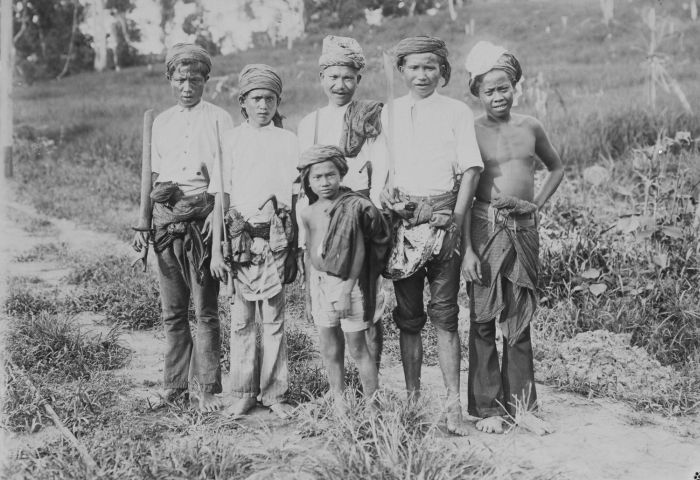 Men and children from the retinue of an Acehnese nobleman.
Notice the rencong and sikin panjang.
Photographer unknown. Tropenmuseum Collection TM-60043266.

Some of the better sikin panjang have a golden “crown” at the base of the blade called puco when it has rounded ends and glupa when it is pointed. The latter seem to have been used mainly on the northeastern coast of Aceh.

These crowns come in anywhere from one to four tiers, their number seems to be connected with rank. Sets of crowned sikin panjang and rencong were presented by the Sultan to uleebalang a class of hereditary nobles who acted as governors, and other dignitaries.

The lowest rank to be allowed to wear the sikin panjang and rencong with the golden crown are the panglima prang. Their weapons typically have a single-tiered crown. We know that the Sultan of Aceh had weapons with four crowns. That leaves two to three crowns for important people in-between, like the uleebalang, nobility who were in charge of local regions.

A very good example of an Acehnese sikin panjang with a triple-tiered golden crown of the rarer pointy style called glupa. The blade is of textbook form for these, straight, single-edged with one groove near the spine.

The piece is of high quality throughout, starting at the blade which is forged from the finest pattern-welded steel I have seen on these to date. It shows a boldly contrasting pattern in shades of dark grey to silver. Some of the silver layers light up brightly when viewed from the right angle. 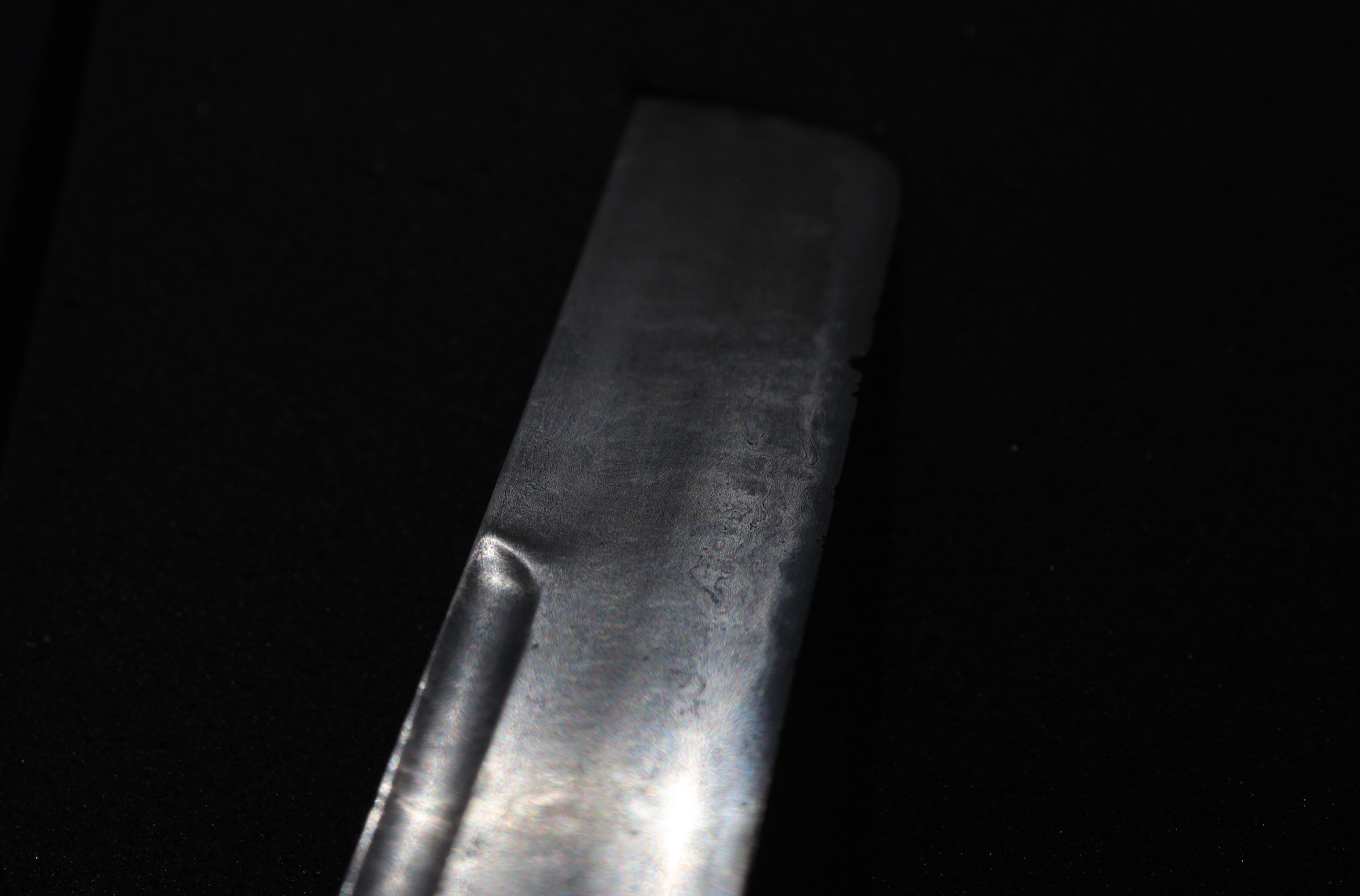 Besides the layering, it has a differential heat treatment that starts about 65mm from the hilt and bends around the tip. These effects are widely known as hamon on Japanese swords.
Many non-Japanese swords have them, too, but few are ever polished far enough to reveal them.

The blade is forged together with a steel bolster, which is inlaid with traditional Acehnese stylized floral patterns in gold. Some golden inlays also extend onto the back of the blade.

The golden crown with its three tiers is in good condition, with no dents or losses to the gold. It retains some of the original dark blue and green enamels that once adorned it.

The hilt is a beautiful amber-colored buffalo horn.

The blade was polished and etched by Philip Tom to once again bring out the fine pattern. Most of these have seen action and this example is no exception, judging from the edge damage that remains. One age-related crack in the horn handle. No scabbard. 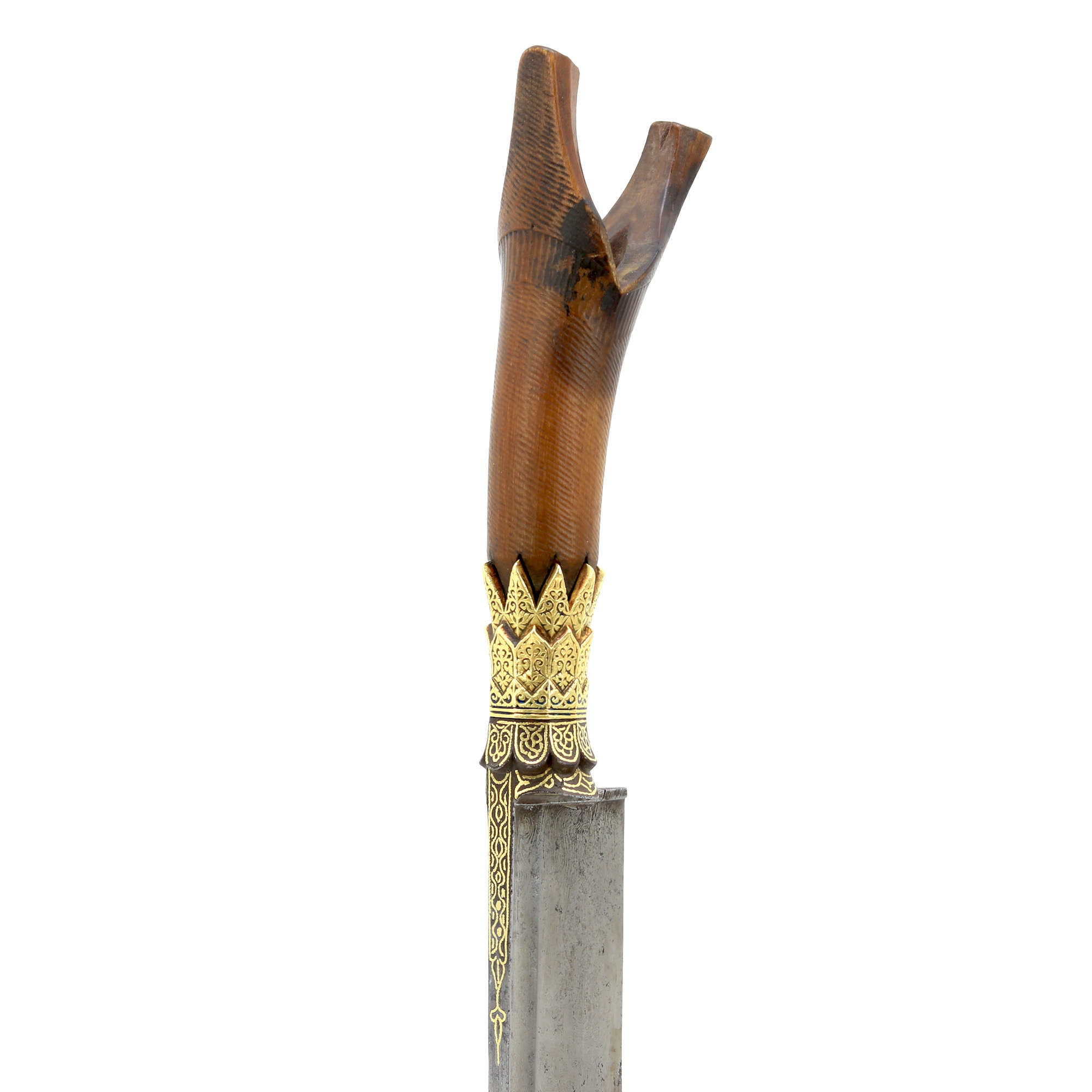 Cast brass shield of a ceremonial type that was used during sword dances in Aceh.