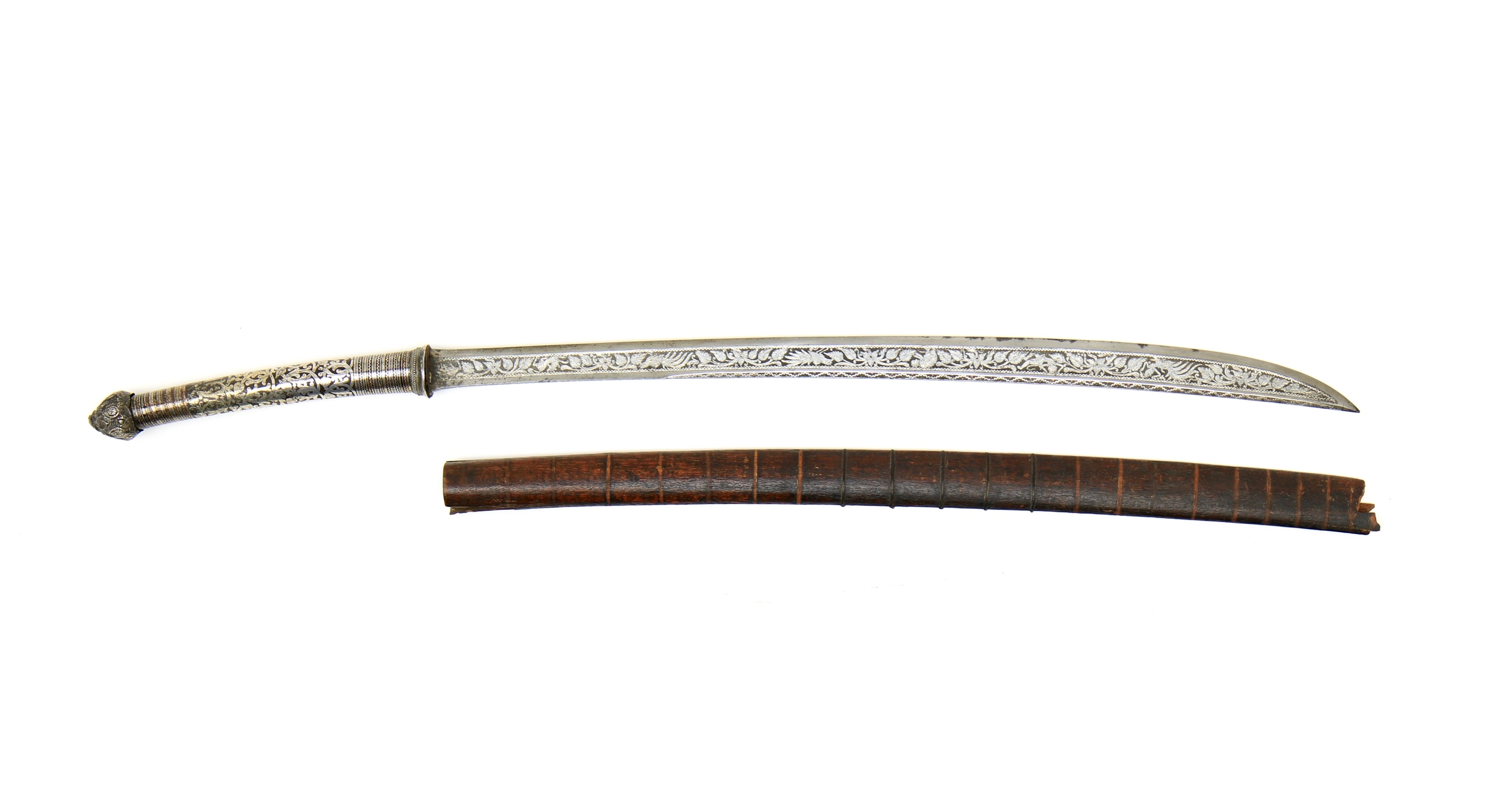 From an Austrian private collection

At first glance this looks like a rather typical silver overlaid Burmese dha, that are strongly associated with the manufacturing tradition of Mindan, Yamethin district, just south of Mandalay. For more information on Mindan sword production, see my glossary article: Mindan, Yamethin.

But there are some differences.

Blade, of typical form. Relatively thick at the forte but with a good distal taper. In profile we observe a gentle and pleasant widening towards the tip. As is the Burmese custom, has a long back-bevel running about three quarters of the blade.

In the center of the blade is a wide hollow panel that is entirely crosshatched and overlaid with silver. The background was then blackened to make the silver designs stand out in sharp contrast.

The blade is in good condition overall. Some very small nicks and patches of black stains where active rust was removed. Still very sharp. Most of the silver overlay survived, some darkened a little over time.

The designs on either side consist of floral elements with animals and mythical creatures. On each side are seven segments, each with a flower with three petals with branches spreading out left and right that bear fruit or buds and leaves. Between each of these flowers is a creature. There are three different types of bird, monkeys, human figures, and mythical half man half bird creatures called kinnara.

There are also a number of four legged animals, some of which seem to be thaman gja (သမန်းကျား), or "forest tiger". These are also translated as were-tiger because like the werewolf, they were described as shape shifters that could go from a tiger to human form and back. The whole may represent a story from Burmese folklore.

Further embellishment of the blade is found on the back bevel in the form of a wavy line with copper dots on alternating sides, framed by a precisely done border. Floral scrollwork is seen on the base of the spine.

The hilt is made entirely of iron, determined by a magnet. It is decorated by bands of inlay in silver and copper. A mid-section is done in thick overlay, so thick that is gives a good relief and with that a firm grip. It is decorated with bold floral scrollwork in a repetitive motif.

The pommel feels like somewhat of an afterthought; made of relatively thin silver and screwed on with a very old screw. It does resemble the form of pommel often seen on Mindan work, so overall it's stylistically not out of place, but I do not think the piece was initially made with this pommel.

The piece comes with its original wooden scabbard, at least what is left of it. Part of the tip is lost, the remainder split, and there is some wood missing at the scabbard mouth. It also used to have many silver wire wrappings to hold the halves together, now only 5 remaining. It could use some attention from a professional restorer.

Yeah that must have looked better when new.

The blade certainly looks to be made in Mindan, Yamethin, but the work is somewhat more abstract and less flamboyant as the items made when Bell visited the workshop of Saya Pyo in 1907.

The trade was said to go back 5 generations from his father, Saya Lan, which means it started somewhere in the 18th centurt.

Looking at this piece, the story-like decor, but the absence of text, plus the relatively deep curve in the slender hilt, and the bold nonstandard decor of the hilt, I think this is most likely an earlier example of Mindan work.

Exactly how early is hard to determine because earlier pieces with dates on them are practically non-existent. We do know from period accounts that officers used lavish silver dha in the First Anglo-Burmese War (1824–1826), and this piece may well date from around that time.

"Rubies, also, are a sign of rank, and only permitted as ornaments in the swords and cups of the very highest dignitaries. The former point out rank very distinctly, those of the subaltern chieftains having merely silver scabbards and handles, whereas the superior oflicers have theirs made of gold, and often handsomely ornamented with precious stones." 1

"The advanced posts of the army under Shumba Woonghee, had now appeared on the banks of the Rangoon River, seven miles from Rangoon."

"The carnage was very great, at least five hundred men being slain in the first stockade, and amongt them was Shumbah Woonghee."

"In this stockade was a battery of nine small guns, and ranged in a row behind, wore the Burman colours. They were made of red silk, swallow-tailed, and having the figure of a Braminy goose in the centre, and when furled, were bound round with green leaves instead of cases. A great many stand of arms were captured and destroyed, and many handsome spears, the shafts headed with chased silver, swords with gold and silver handles and scabbards silver caps, and even the Tsaloeh or gold chain of nine links, worn by the Woonghee became the property of the soldiers. The latter ornament was afterwards sold for six hundred and fifty rupees." 2

In the last account, many lavishy decorated swords and spears were captured. This is probably not just the regalia of the Woonghee, a powerful noble rank, but of his retainers as well. The stockade they mention was a temporary camp, so these were practical weapons taken on campaign, not the contents of a palace armory.

Composite illustration of the dha-lwe made by Saya Pyo in Mindan, early 20th century.
The decor became more complex around 1900, and the hilts straighter. 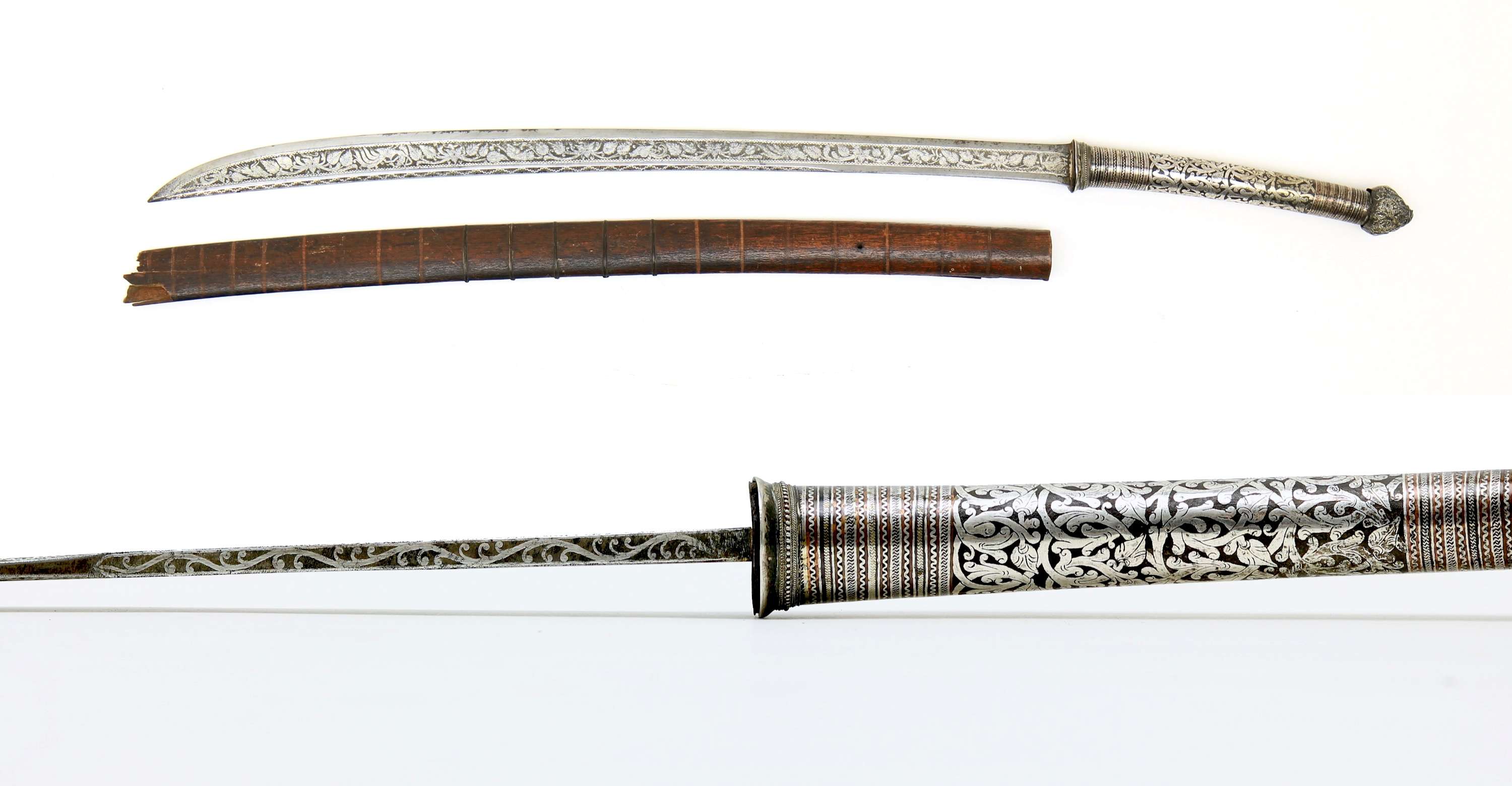 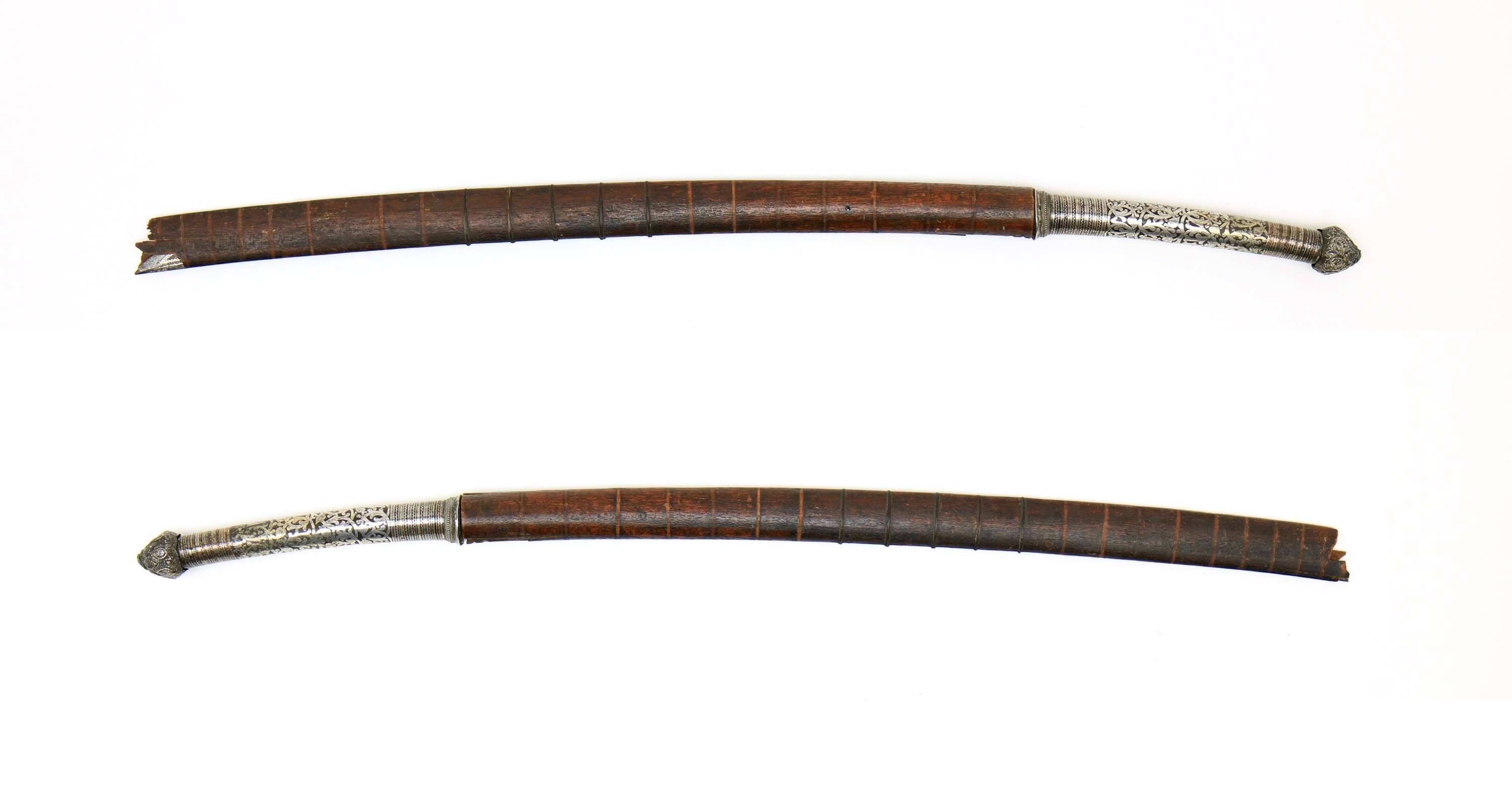 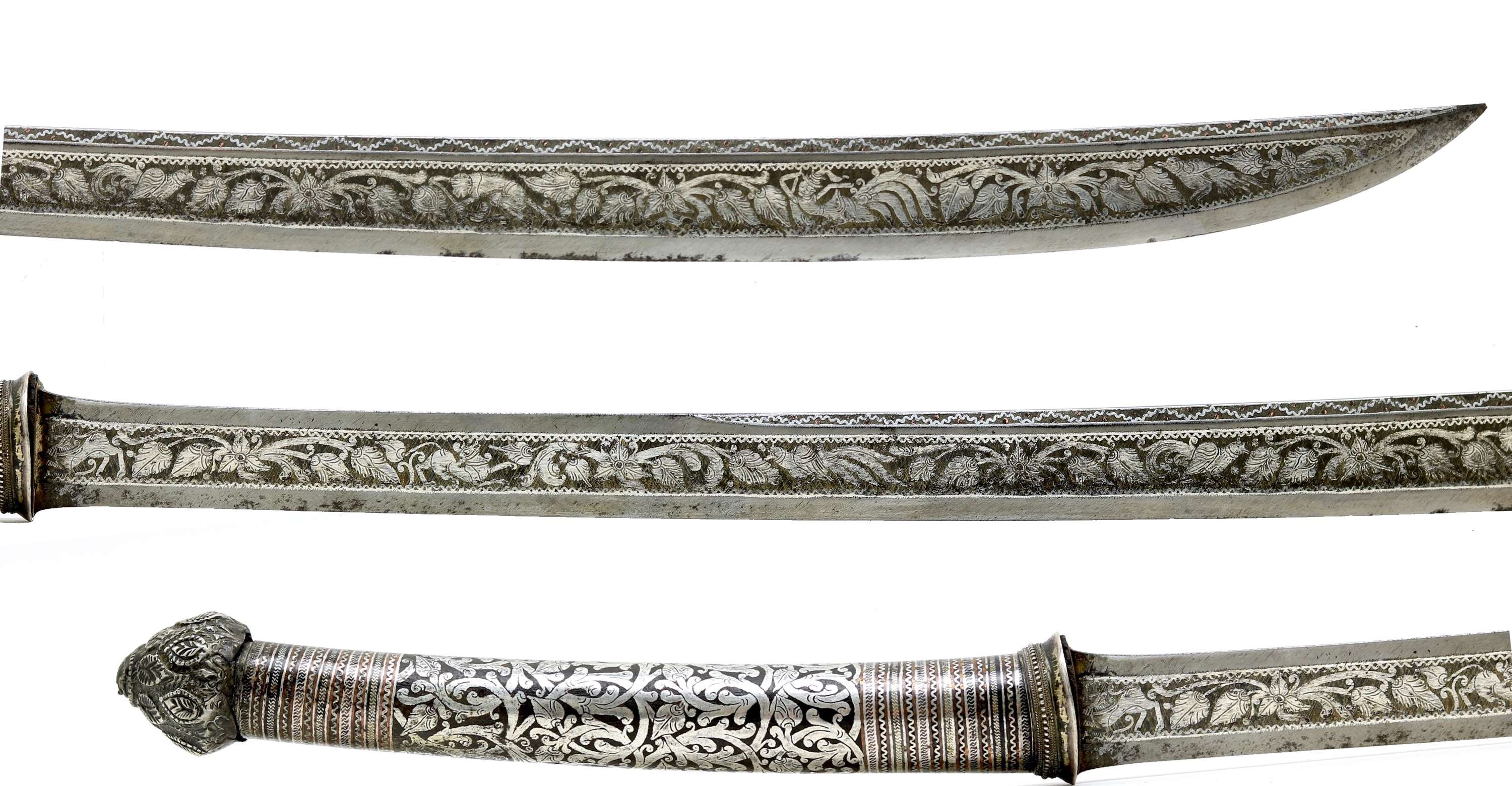 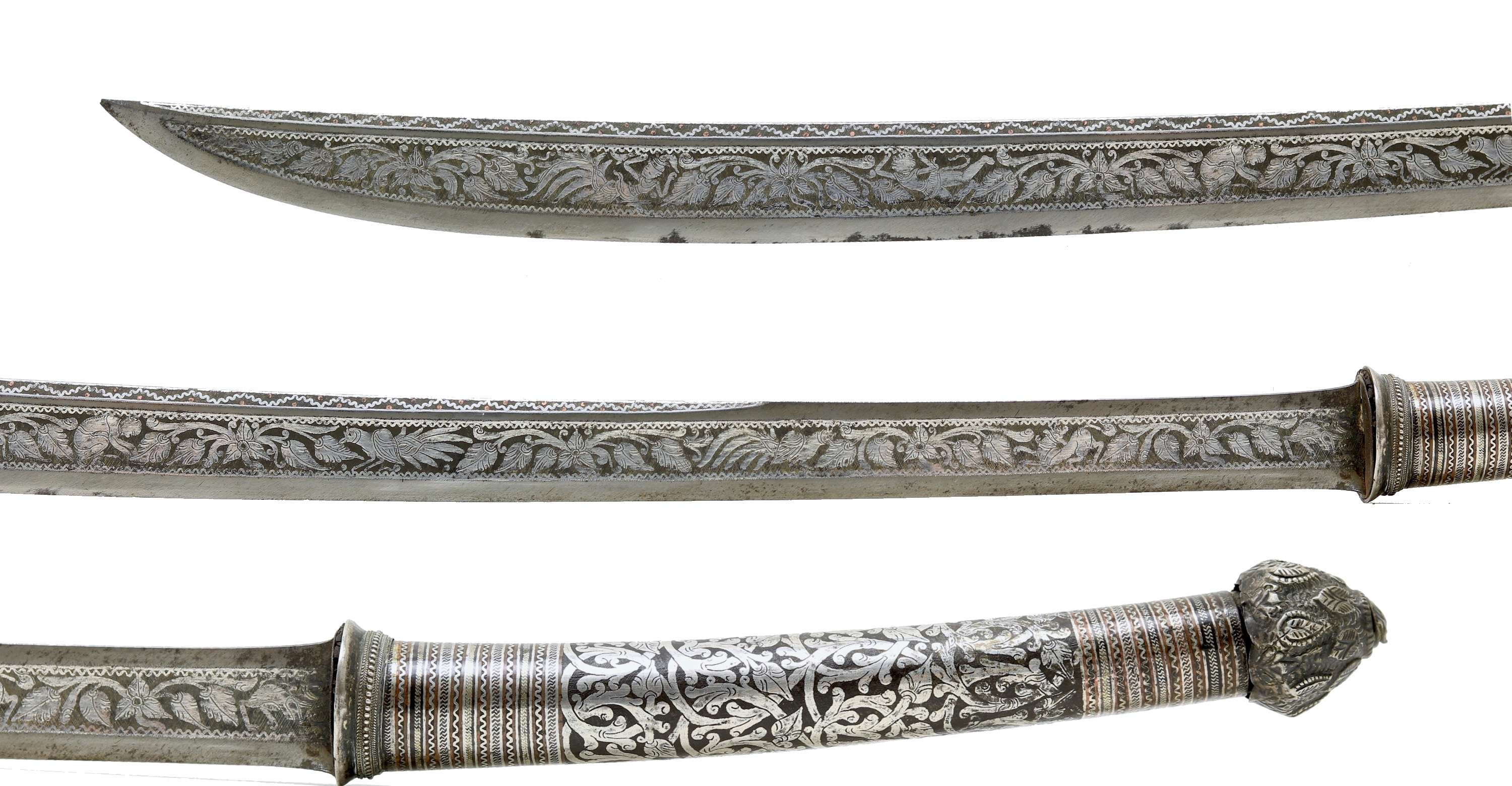 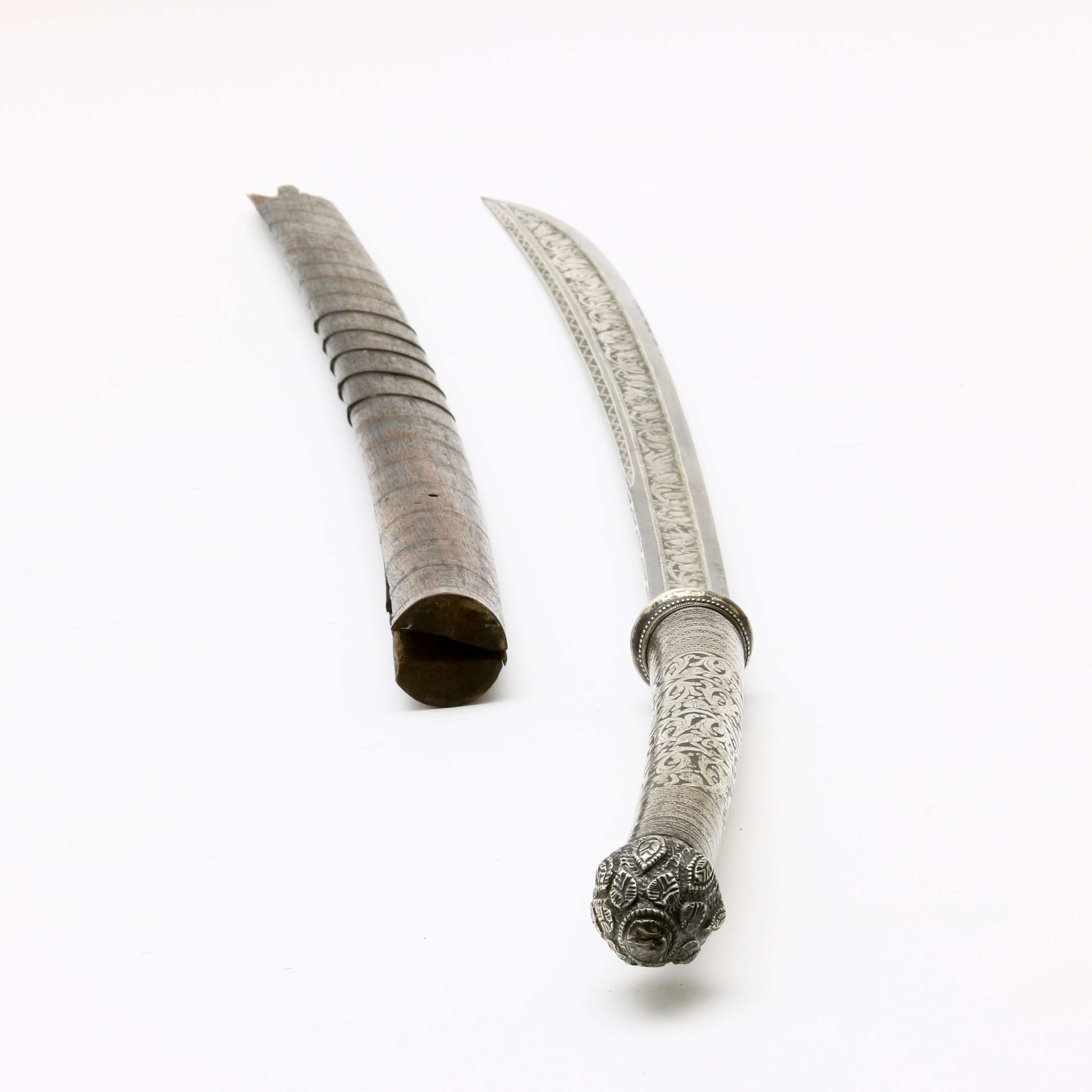