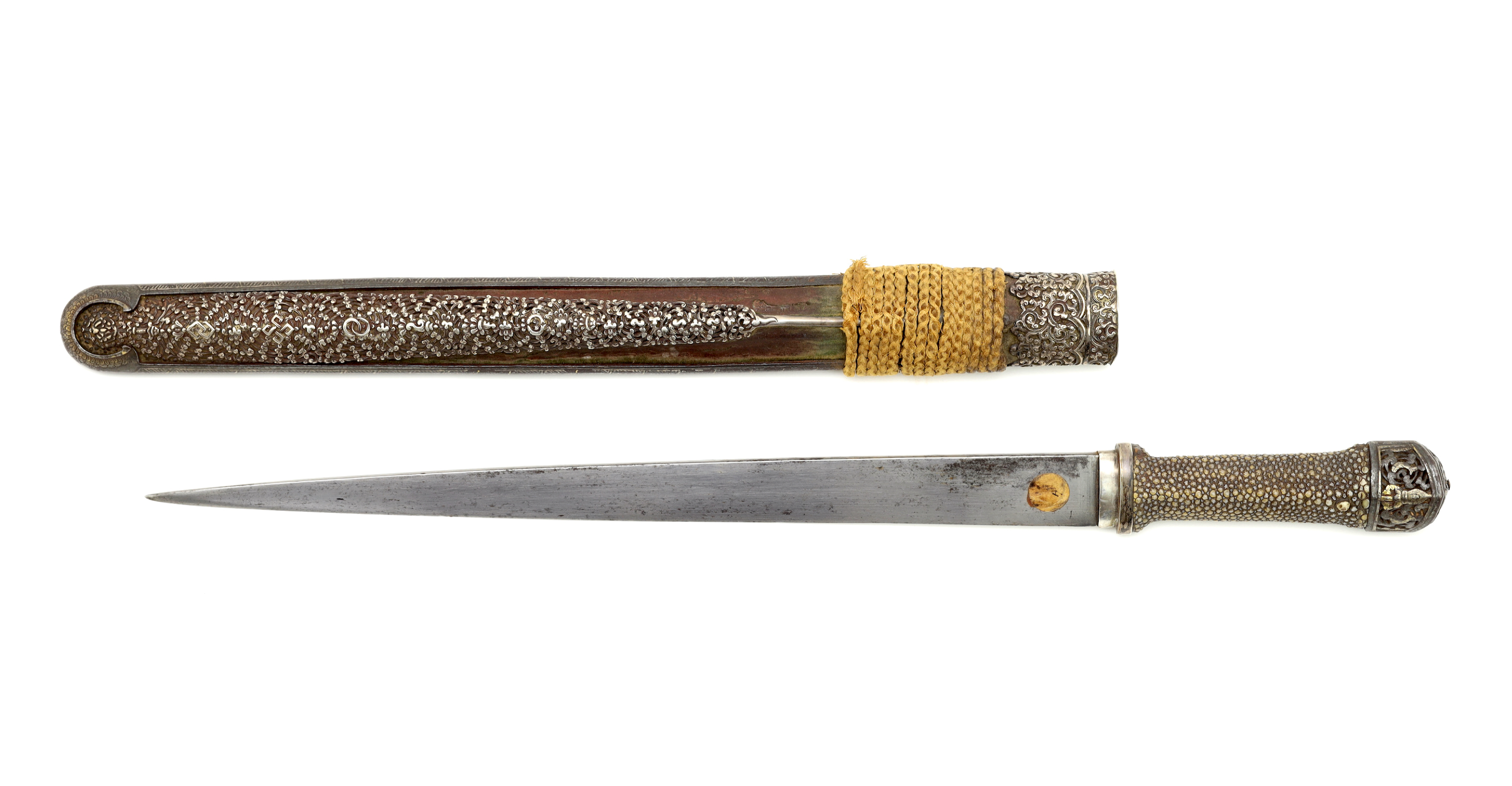 A Bhutanese shortsword with a slender blade that gradually tapers to a sharp point. The blade shows longitudinal forging lines of a type which collectors like to call “hairpin laminations”. This is a type of bladesmithing that is peculiar to the Himalayan plateau; Instead of forge-folding plates into a lamellar steel body for strength, this method “stacks” the layers of the edge on top of each other. The method was probably developed to make the most out of the limited fuel resources and low oxygen levels at that height that made it hard and expensive to sustain high temperatures for longer periods in the smith’s oven. The blade is polished to an almost mirror-like finish, as per the Bhutanese taste.

The wooden hilt is covered with stingray-skin (himantura uarnacoides) that was imported from Southeast Asia, a very prized material back then, so far from the sea. The pommel is made of pierced iron, damascened in gold and silver. The facing side shows a parasol and two fish. The back shows a vajra, a ritual weapon symbolizing the properties of a diamond (indestructibility), and a thunderbolt (irresistible force).

The scabbard consists of an iron U-frame holding two slabs of wood. Once covered with now much faded and worn green silk velvet. The facing side of the scabbard has a large silver ornamental plate, pierced and chiseled with flowing designs and Buddhist symbols.

The scabbard's frame and the pommel are of a type of ironwork that may be earlier than the rest of the sword.

This sword was previously in the collection of P. Holstein, a notable collector of the early 20th century. He is famous for his Contribution A L'Etude Des Armes Orientales, a large two-volume set of books with illustrations and descriptions of arms from all over Asia which was published in 1931. This sword is featured in Volume II, No 4, and plate XIX. Its blade still retains a round paper label on the blade with the number 4 on it. 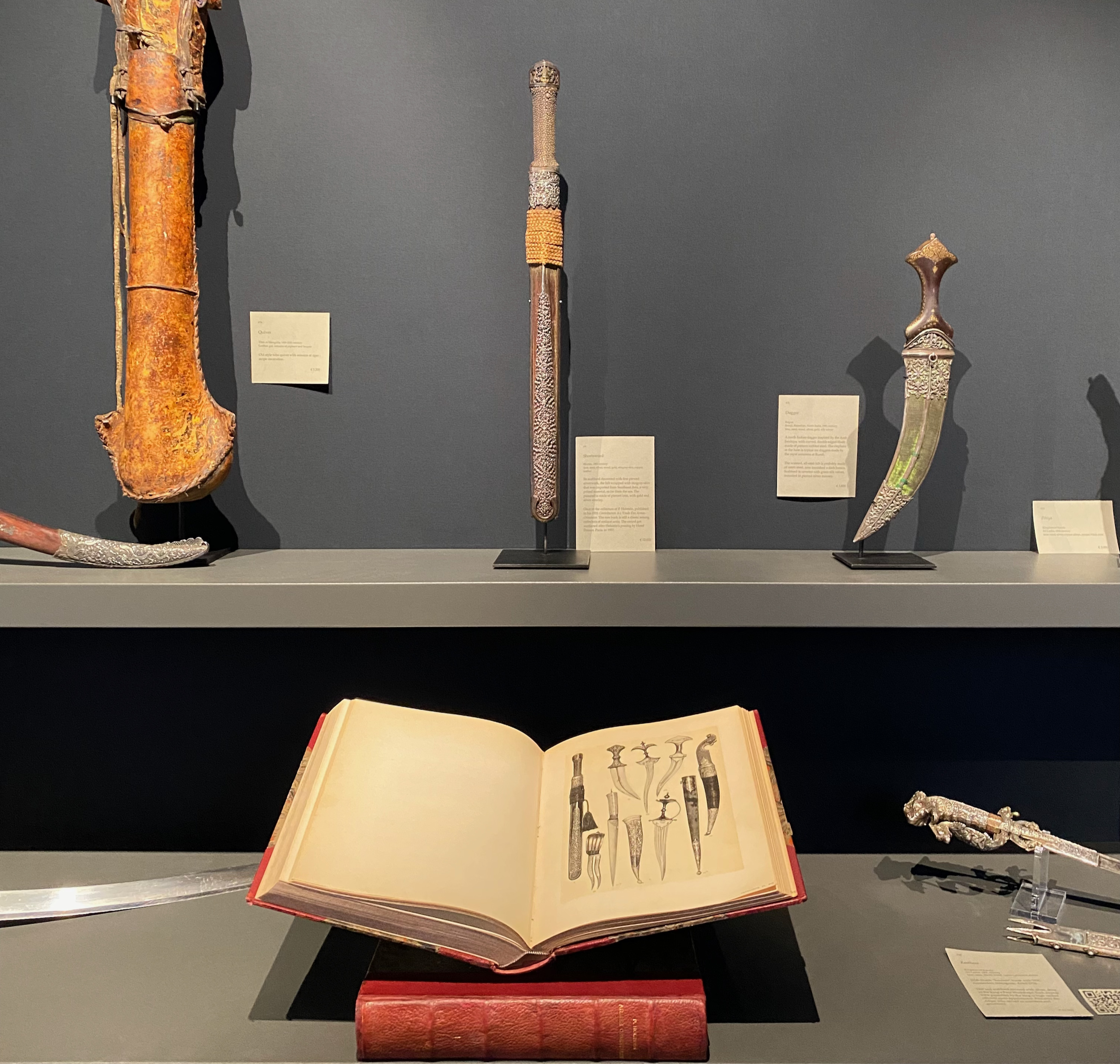 The sword exhibited at PAN Amsterdam 2021.
Under the sword the 1931 publication showing the page that illustrates the piece.

After Holstein’s passing, the sword was auctioned at Druout in Paris in 1957, lot number 1. The paper label with that number is still attached to the back of the scabbard. 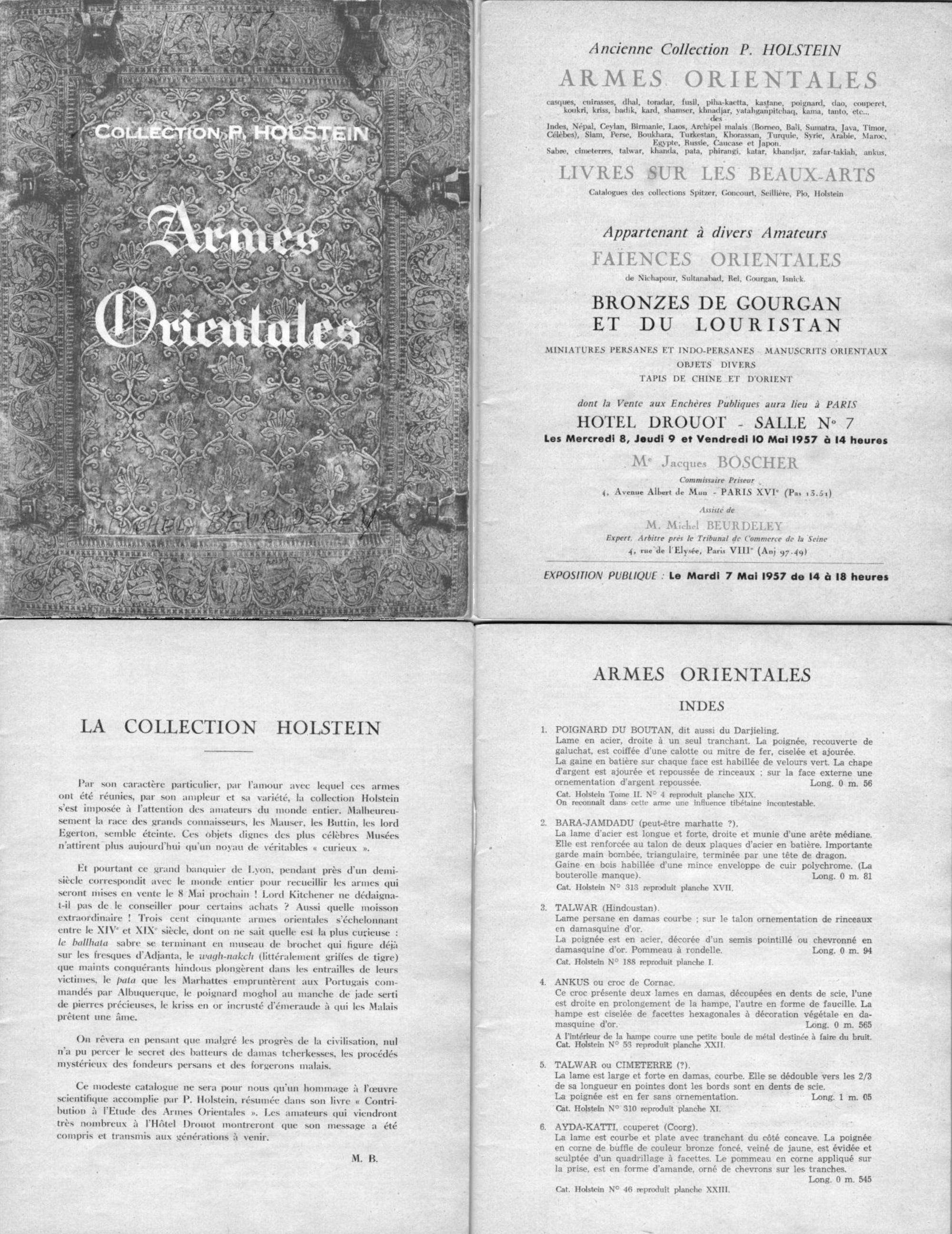 Pages from the catalog of the 1957 Drouot sale.

Good general condition. Blade clean with no edge damage or pitting. Most of the velvet is now worn. Some usual wear and tear to the softer silver and gold and silver overlays. See photos for a good impression. 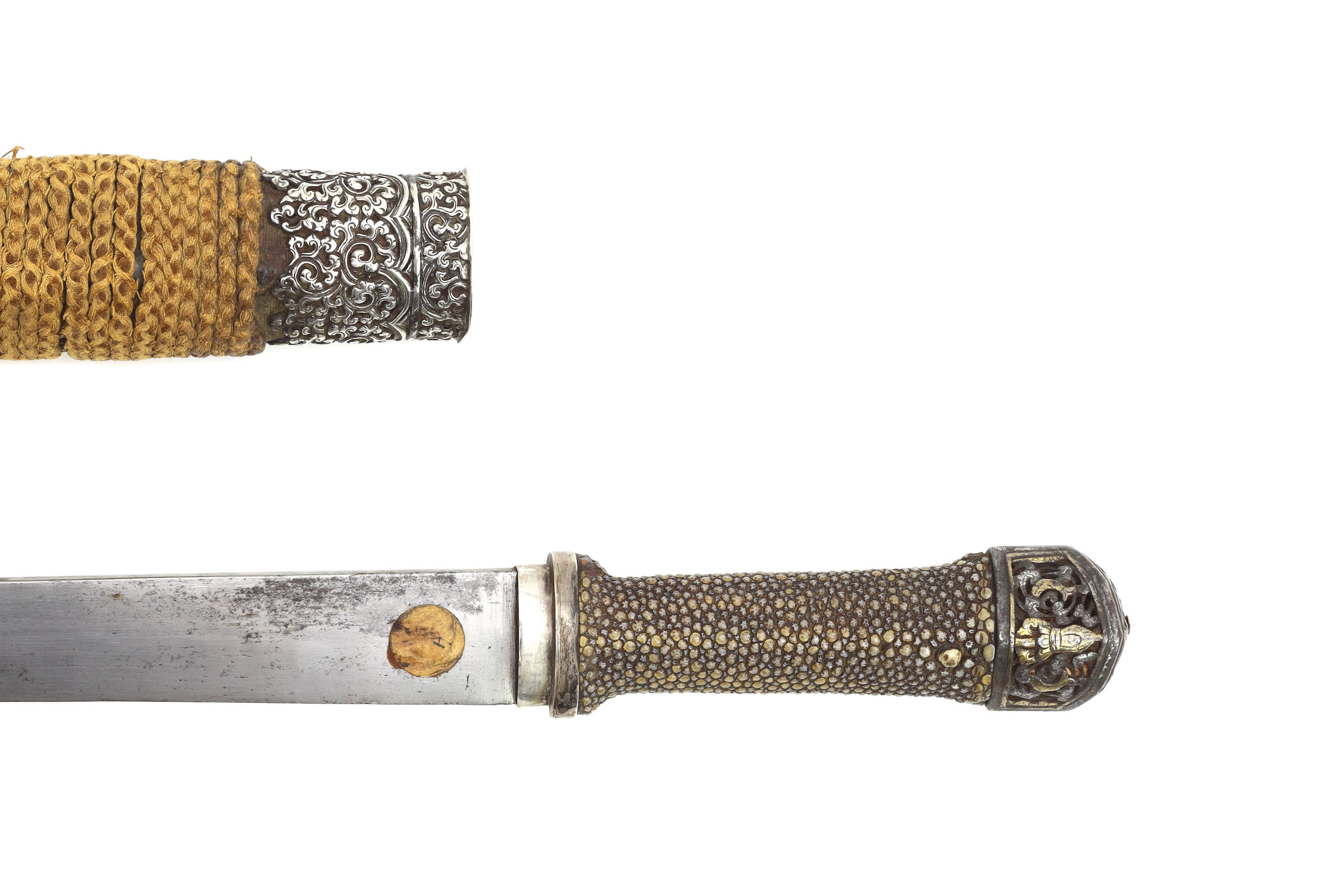 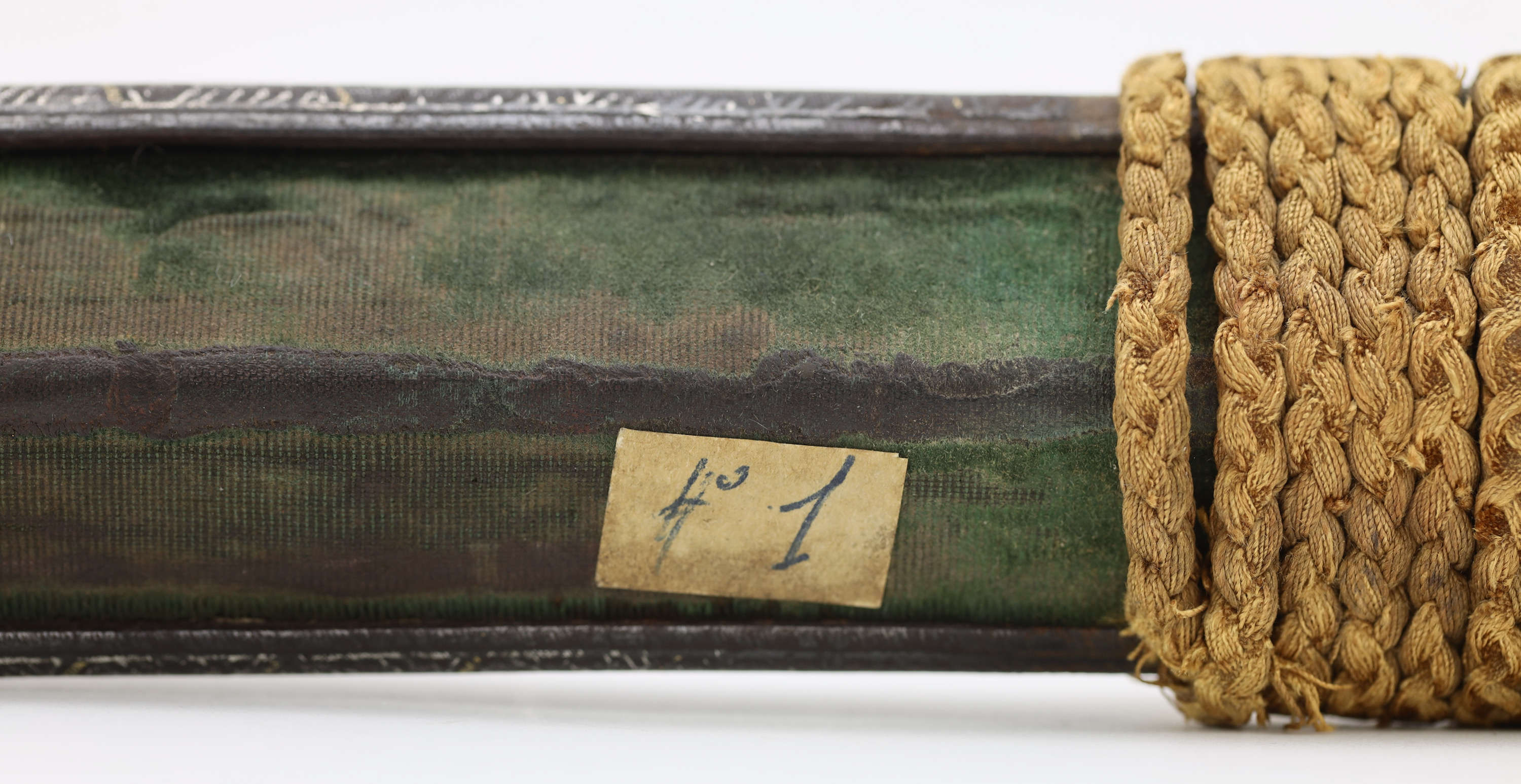 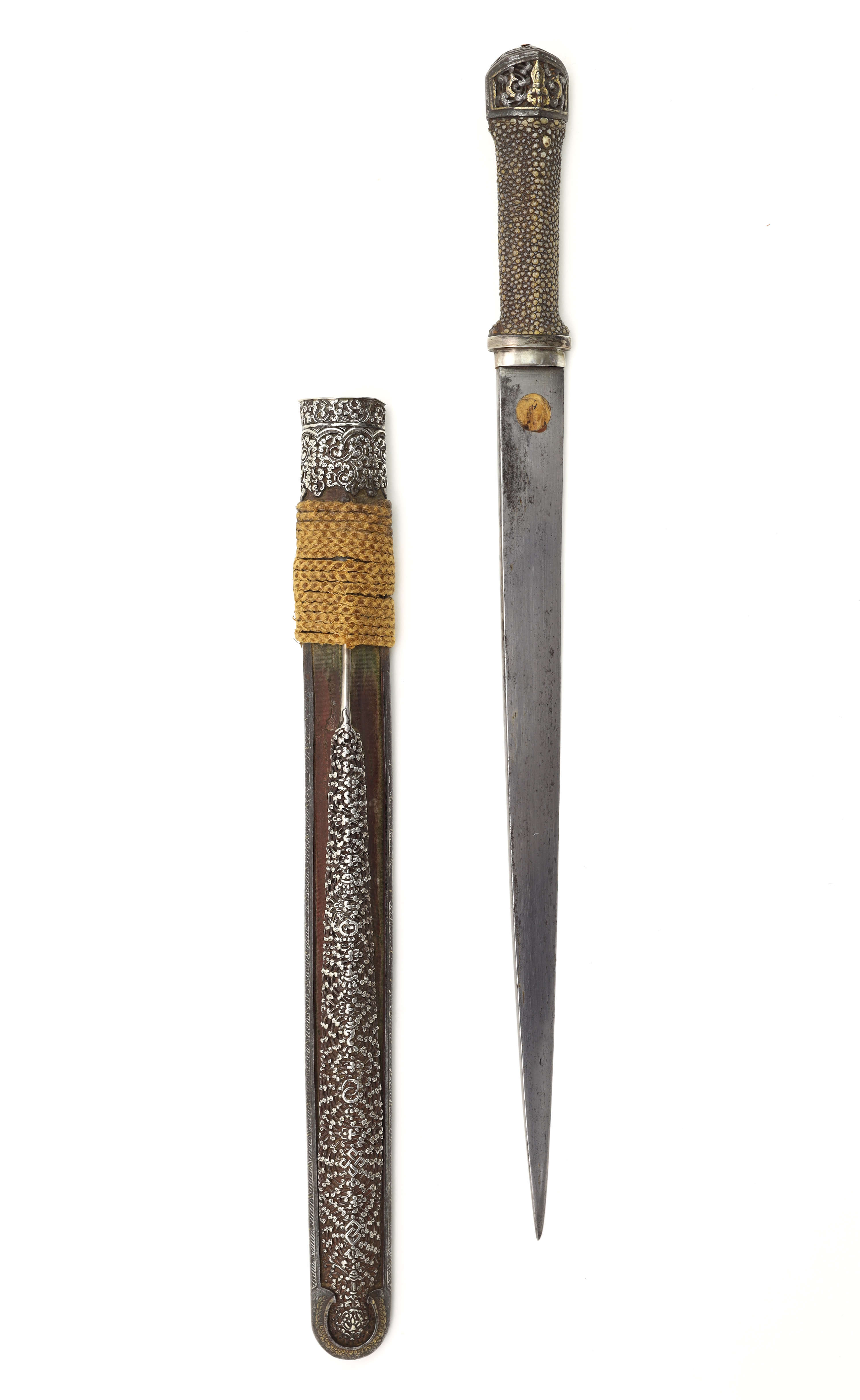