Lóngquán (龍泉) is a town along the Ou river in Zhejiang province, China, known for its sword making. Until the Tang dynasty, the town was called Lóngyuān (龍渊), yuān meaning a deep pool, or deep or profound in meaning. The founder of the Tang dynasty, Emperor Gaozu, banned the use of the character yuān as it was part of his personal name. Before this event, swords from lóngquán could also be called yuān jiàn (渊劍); "deep well sword".

An old set of double swords with an inscription that refers back to the town's past name.
Sold by Mandarin Mansion in 2021.

The words 龍泉 can be found on many swords from the late Qing to early Republican period. They appear almost exclusively on straight swords, jiàn (劍). While some of them appear to be made in the town of Lóngquán, it seems that some others might be made elsewhere, especially in Canton.

The markings are usually found on one of the scabbard mounts, most often the upper suspension mount: 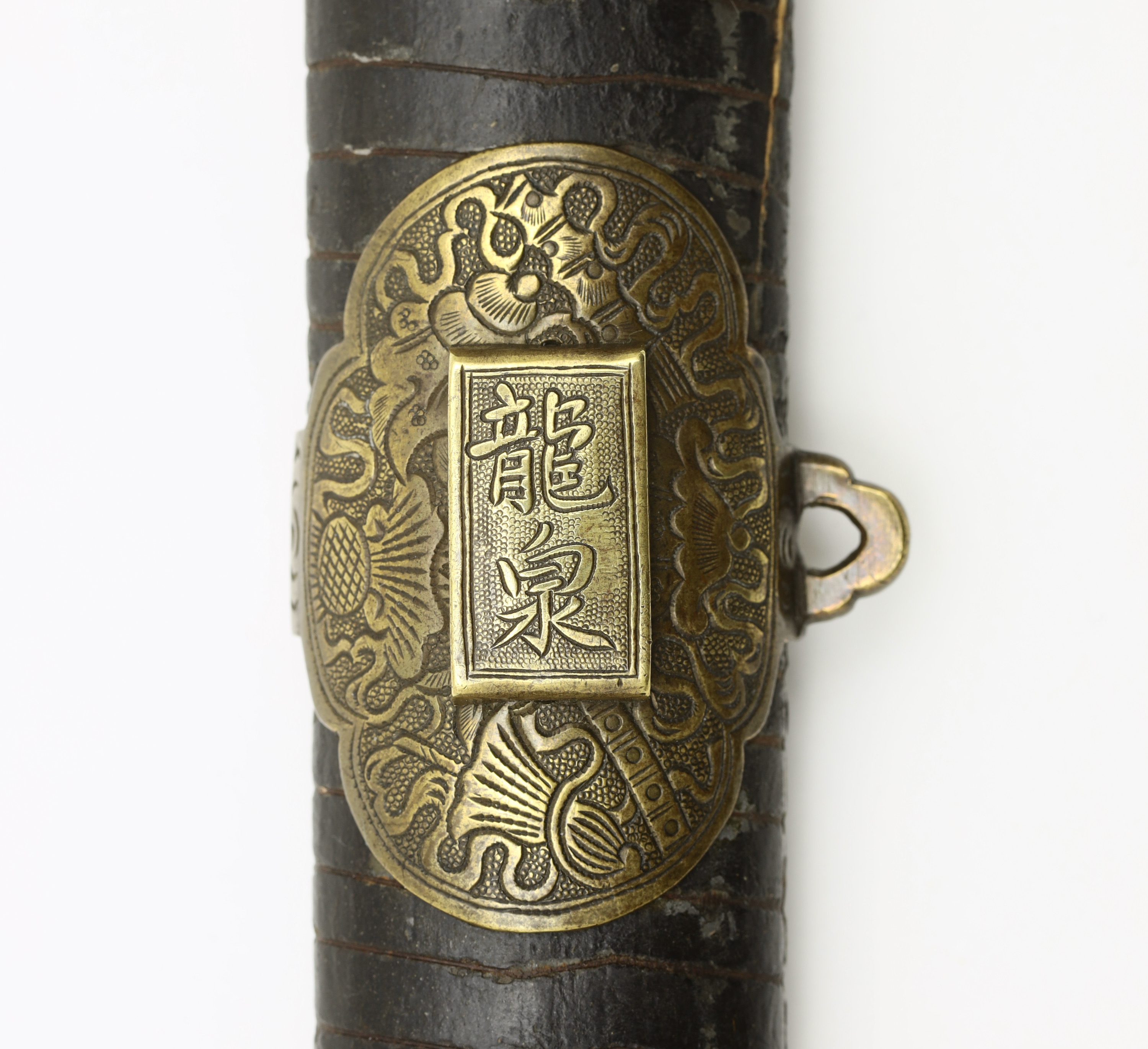 In rarer cases, the words are found inlaid into the blade in brass or copper. One such sword is published by Alex Huangfu.1 The markings include the words:

A sword much like it was confiscated by the Japanese all the way up in Manchuria in the 1930s.2

A number of workshops are mentioned in Chinese sources. These were called jiàn pù (剑铺) or sword shops.

1858 (8th year of Xianfeng)
The Taiping Army was stationed in Lóngquán and needed a large number of swords and weapons. The fourth-generation grandson of Zhèng Yì Shēng, Zhèng Sāngǔ (郑三古)'s shop was overwhelmed by the surge in demand.

Opened by Zhōu Guóhuá after completion of his training with Zhèng Sāngǔ of the Qiān Zì Hao shop.2

1956
Chén Huànzhōu and Chén Huànwǔ made a sword for Mao Zedong.

1972
4th generation Chén Xīnpéi made a sword for US President Nixon.

1979
Received by chairman Deng Xiaoping for a group photo.

1991
Chén Xīnpéi was officially recognized as a master of arts and crafts in Zhejiang Province.

2005
Xi Jinping visited the sword shop. Chén Xīnpéi and Chén Zhōu made a sword for him.

Notes to known sword shops
1. https://baike.sogou.com/v299709.htm
2. Ibid.
3. From sgljp.com. Thanks for KK Cheung from www.lkchensword.com.