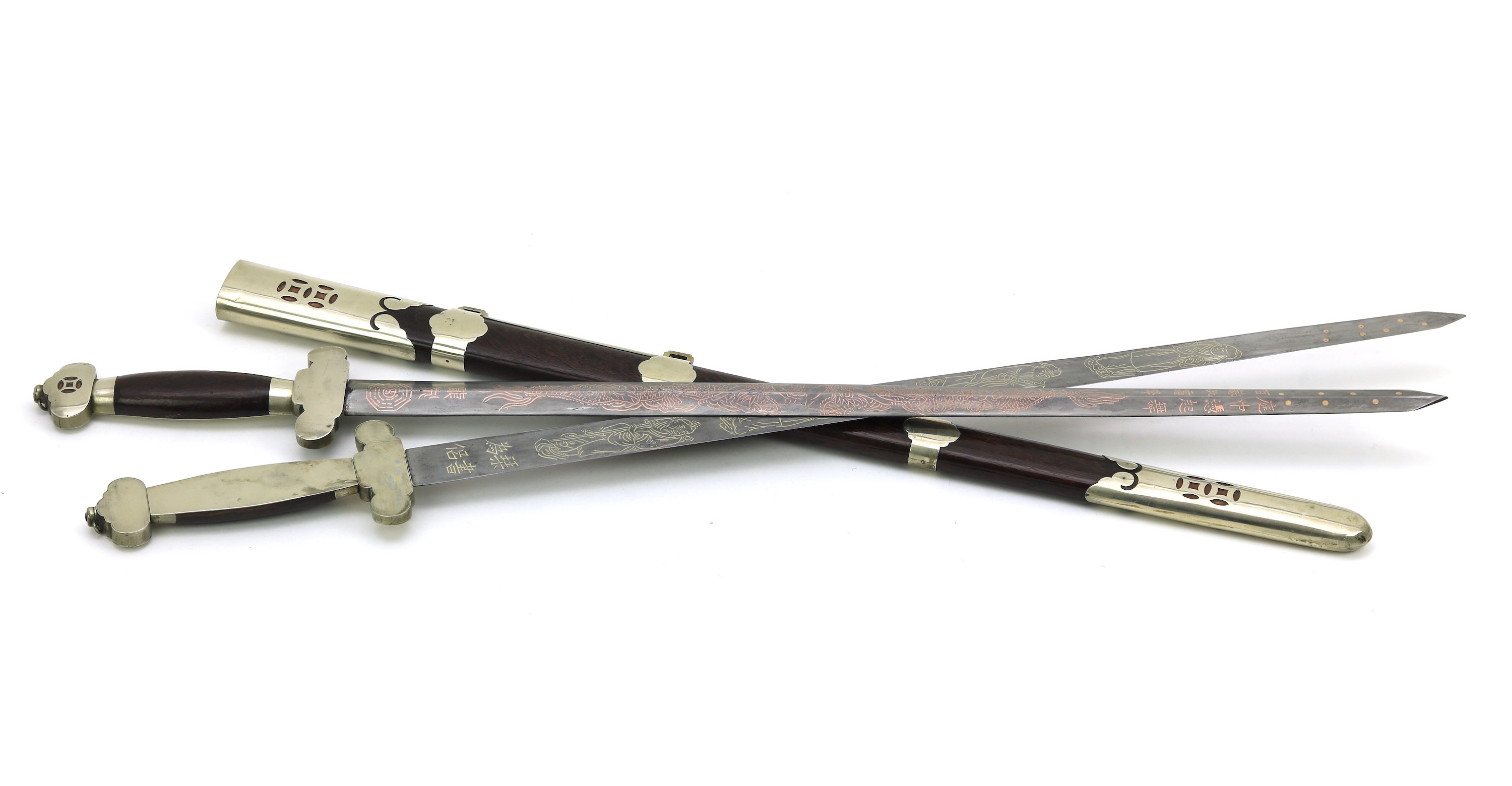 From a US private collector

A very good set of Daoist straightswords in a single scabbard. There is a lot to see here, I will start with the blades.

The blades start wide at the forte and have a marked taper leading up to a triangular so-called "male-tip". They have a triangular cross-section with a flat on one side and on the other convex slopes leading from the center ridge to the edges, giving the edges great strength. The general blade style is very much Ming in style, although we are probably looking at a revival of an earlier style and not actual Ming blades.

Each blade is forge folded with a subtle layering of mild steel, protecting a high-carbon edge-plate. In the right light, one can make out the spectacular effects of the blade's heat treatment, creating clouds of crystals. The effects are quite hard to photograph, but I have tried.

The blades are lavishly inlaid on both sides with brass and copper. Each sword has the Big Dipper inlaid in the blade near the tip, with each star being made of brass lined with copper. The plugs go all the way through and are visible on either side.

The blades are further adorned with inlays in copper of a pair of dragon chasing a pearl on one blade, and a pair of phoenixes meeting at a peony flower on the other:

The flats of both blades each show four of the Eight Immortals, totaling all eight for the set: 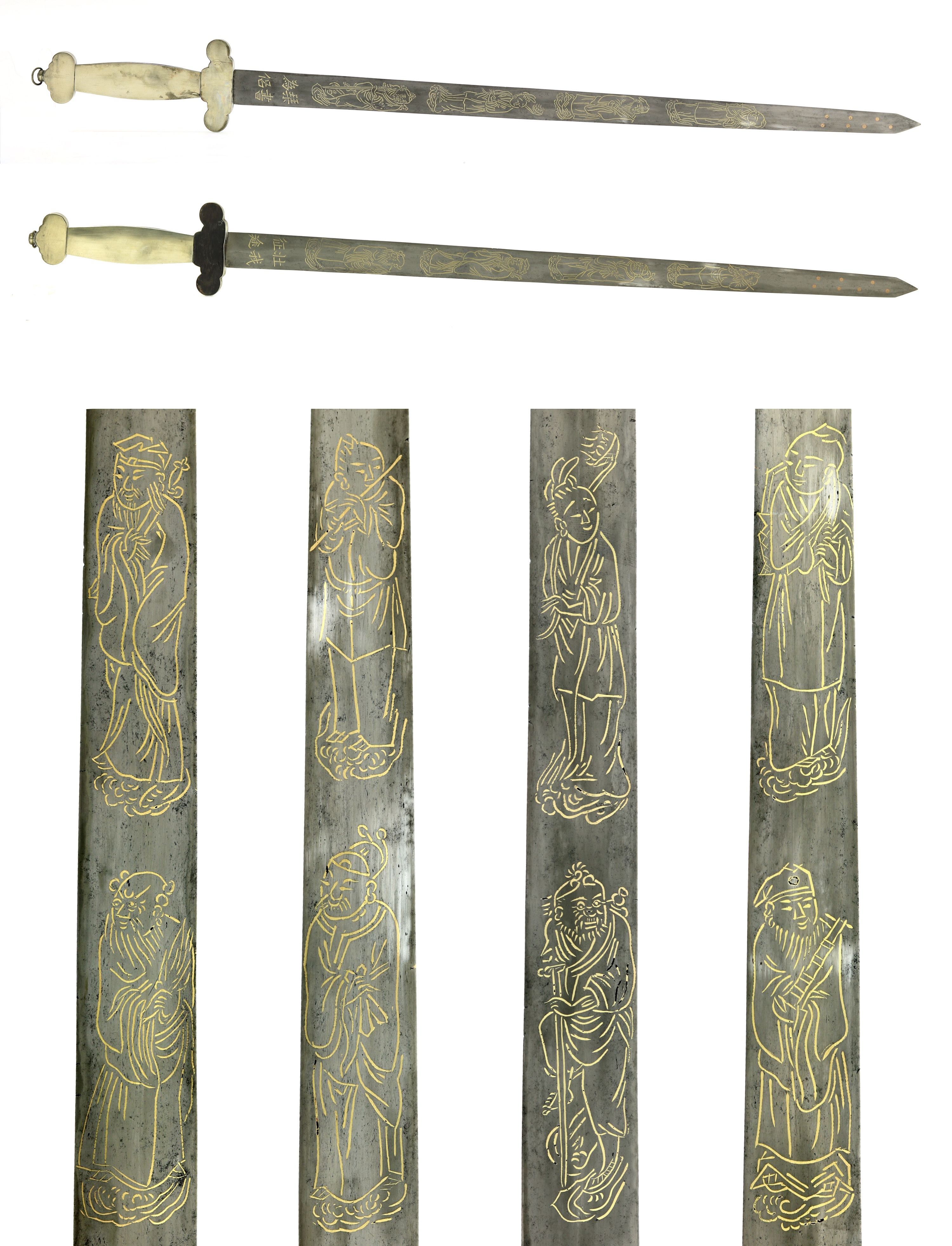 At the base, each blade, ridged side, is an Eight Trigrams symbol with the Tàijí in the center. Above it Chinese characters, skilfully inlaid in seal script:

Lóngquán (龍泉) refers to the old sword-making center by that name in Zhejiang province, along the Ou river. Until the Tang dynasty, the town was called Lóngyuān (龍渊), yuān meaning a deep pool, or deep or profound in meaning. The founder of the Tang dynasty, Emperor Gaozu, banned the use of the character yuān as it was part of his personal name. Before this event, swords from lóngquán could also be called yuān jiàn (渊劍); "deep well sword".

On the reverse flat side of each sword is inlaid in kǎishū (楷書) script:

"Strengthen me on my journey"

"With qin and book as my companions"

Near the tip are inlaid two five-character lines of text: 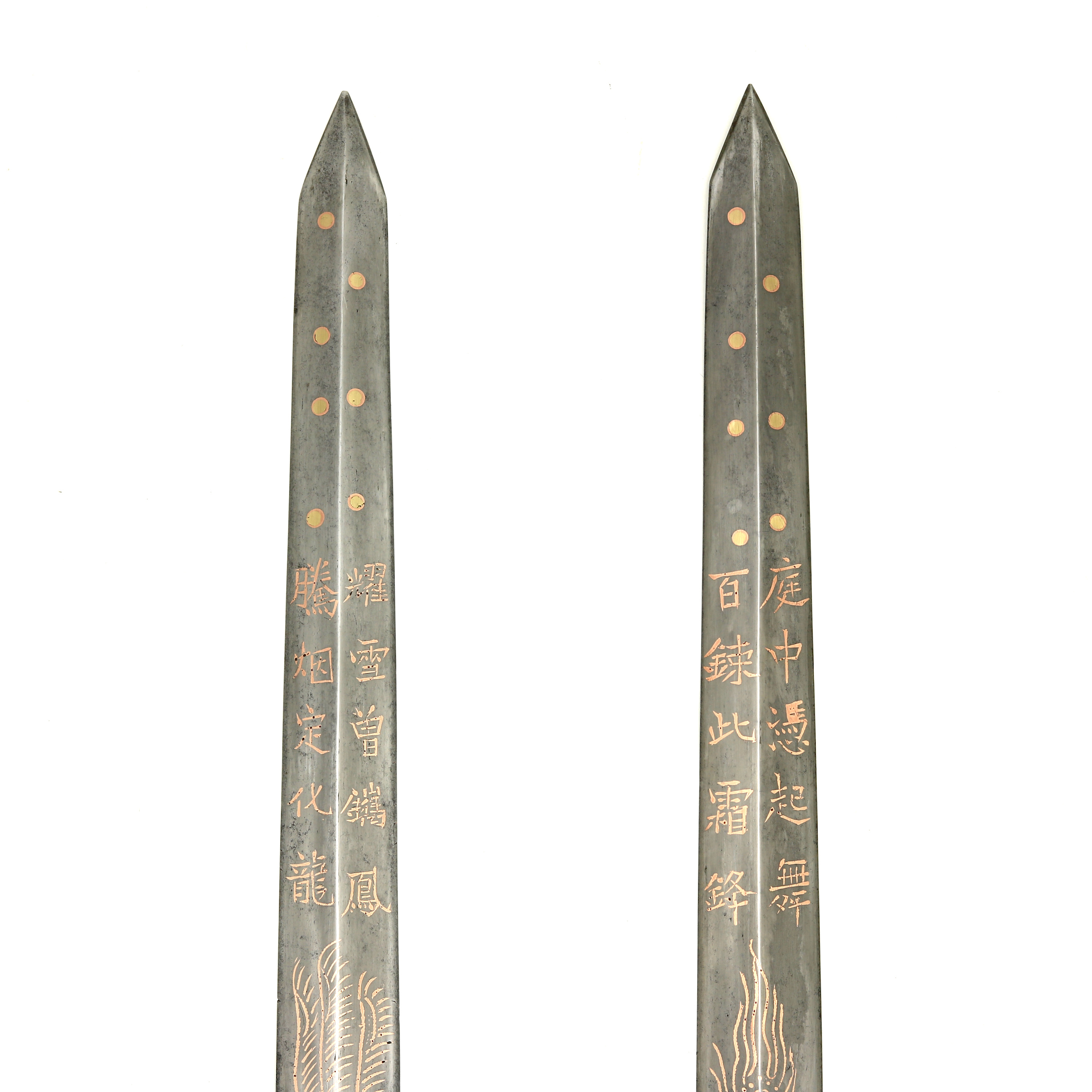 "In the courtyard, [I] rely on brandishing [this]
hundred [times] refined frosted edge"

I am not sure why it is brandished specifically in the courtyard. The hundred refined frost edge is a very interesting reference. References to repeated refinements of steel are found carved into swords and daggers that go back to as early as the second century B.C. The number of refinements varies from 30, 50, 80 to 100, always using the same word, liàn (鍊) for "refined". One such sword found its way to Japan and was uncovered in Nara Prefecture, Japan, which was 100 refined and which carried a date of the Chinese Zhongping period, 184-189 A.D.1 The phrase bǎi liàn gāng (百鍊鋼) lived on as a proverb long after its use on swords diminished. It meant that adversity can create refinement.

The frosted edge refers to the effects of the heat treatment, where carbon present in the steel formed chrystals during the tempering process which can be seen shimmering in the right light: 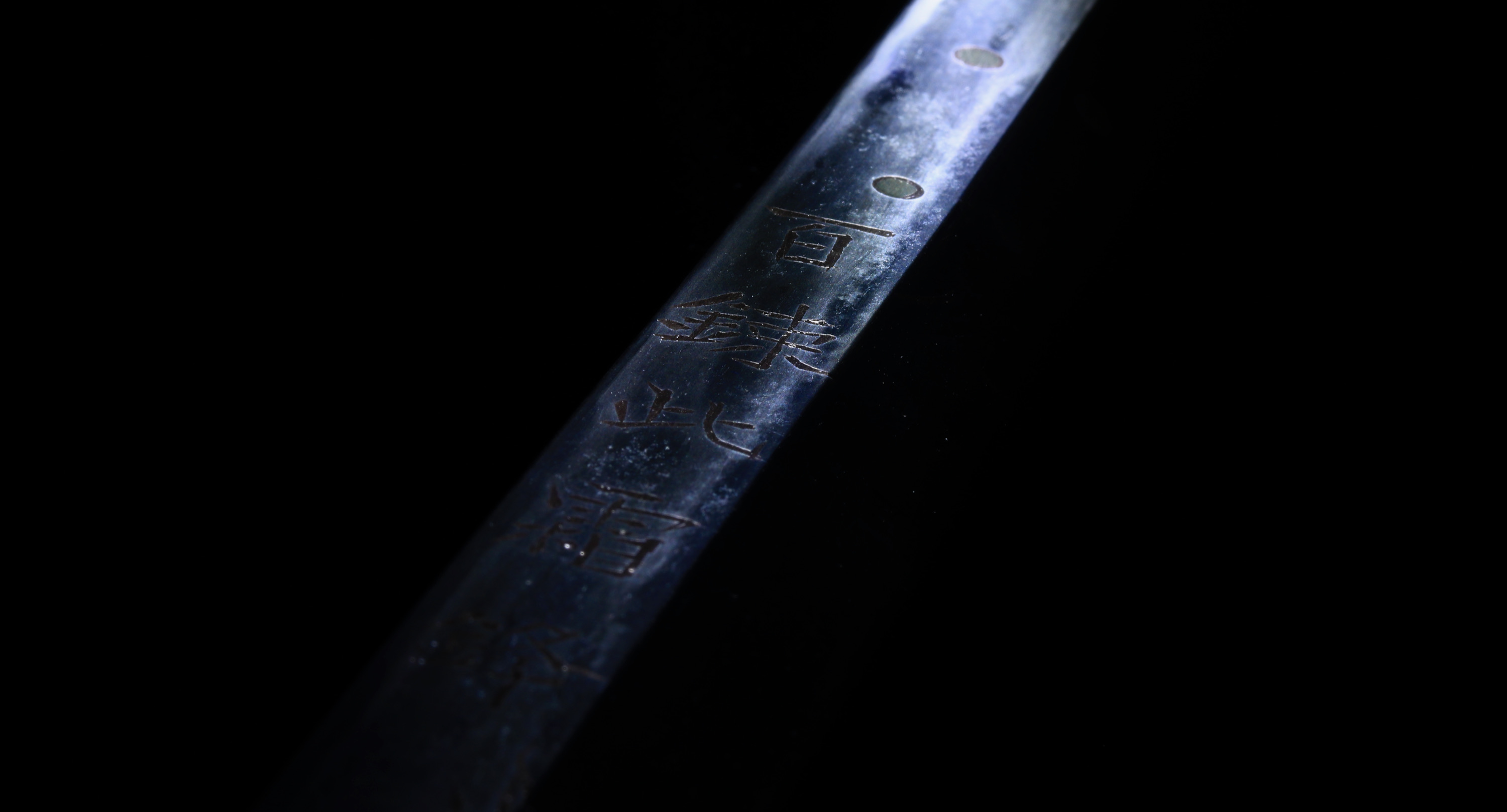 The hilts are of a rarer form, with a relatively wide and low pommel and a guard that terminates in two circles. Such hilts are found on a small number of well-made jiàn, all with strong Daoist references on their blades. Both hilts are peened, the traditional fashion, but with thick washers with added rings that could hold tassels.

The grips and the scabbard body are both made of jīchì mù (雞翅木) or "chicken wing wood". Native to southern China, it was used for high-end furniture making in southern China, prized for its patterning.

The scabbard is made of three parts, a thin sheet in the center that divides the two blades when sheathed, and a rounded piece on either side.

It is mounted in a full set of báitóng (白銅) mounts. A prized nickel alloy that was previously only available by mining it in Yunnan. The scabbard mounts are adorned with tasteful lingzhi shaped cutouts and scabbard mouthpiece, endpiece and both pommels are pierced with stylized coin motifs through which we see a copper underground.

A very unusual feature is the lining of the inside of both grips with metal plates, in this case báitóng. One plate covering the inside of the guard is missing, exposing more previously unseen chicken wing wood. Its purpose possibly talismanic.

Fit and finish on all parts is excellent.

A sword with a hilt of similar profile, chicken wing wood scabbard, and with the words Lóngquán yuān jiàn (龍泉渊劍) on the blade in a similar fashion is published by Alex Huangfu.1 It is a shorter, single jiàn with mounts that suggest it is of a somewhat earlier date. In addition to the Lóngquán reference, it carries a marker's mark:

According to Huangfu, this was one of the shops in Lóngquán which was established in the 13th year of Qianlong, or 1748. No further reference is given as to where this information is from. There is little doubt that our sword here was probably made by the same shop.

Another such sword was confiscated by the Japanese all the way up in Manchuria in the 1930s.2

In good condition overall. Some of the usual denting and superficial scratches. One báitóng plate missing from the inside of one of the guards. Some minor movement in the hilts. Blades largely free of pitting. Some very minor edge damage. See photos.

Judging from the style and workmanship, I believe this piece was probably made in the final decades of the Qing, up to the early Republican period.

One of the most interesting Chinese swords I've had on my research table. Looking at the work and the markings, we can catch a glimpse of the individual who consigned it. The texts on the sword are no generic copied phrases from elsewhere, it is original writing by someone who apparently had some literary talents and an interest in sword connoisseurship. He seemed to enjoy the effects of the heat treatment, and liken them to frost, snow, and smoke.

The text on the base of the blades which reads "Strengthen me on my journey, with qin and book as my companions" confirms the image of a classical scholar. The qin is an old seven-stringed instrument that is strongly associated with the scholar class and represents refinement. The text also suggests he is moving around, alone, and expects to face hardships. It may all be metaphorical of course, but it does remind of a story by William Mesny of men in southern China who were duelists, poets, and traveling troubadours all in one, who challenged each other or joined forces for what they thought to be a just cause.1

The prized chicken wing wood scabbard, with plain but elegant and well-made báitóng mounts, indeed show a man of refined tastes. He could have gone for the more mainstream and immediately obviously expensive gilt-copper mounts that were in vogue at the end of the Qing, but he chose something that looked more humble from a distance. Only closer inspection reveals the quality of the work and the materials.

From a contemporary sword collector's point of view, this is an extremely rare piece. It is rare today to find a good quality, full-length jiàn, let alone a paired shuāngjiàn of this size. It is also the first paired, full-length version of this Daoist style of jiàn I have seen to date. The blades show a quality that is uncommon for later period pieces, with references to earlier swords in both the blade geometry and references in its inscriptions.

A remarkable set that was a joy to research and document. 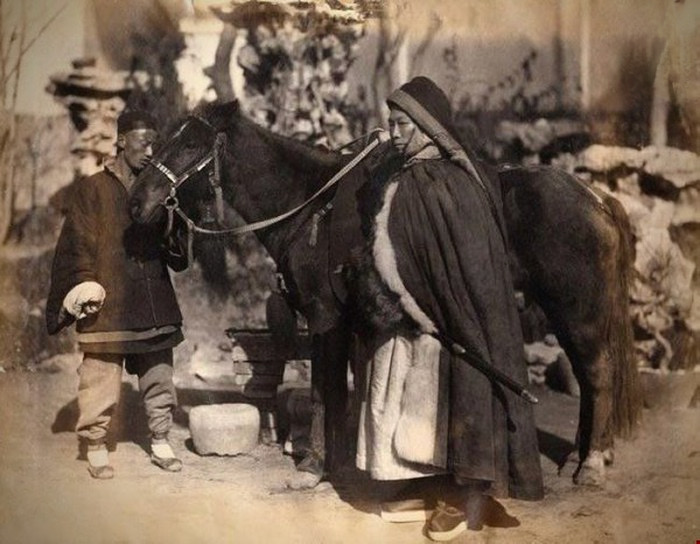 A traveler with his jiàn.
Late Qing dynasty. Unknown photographer. 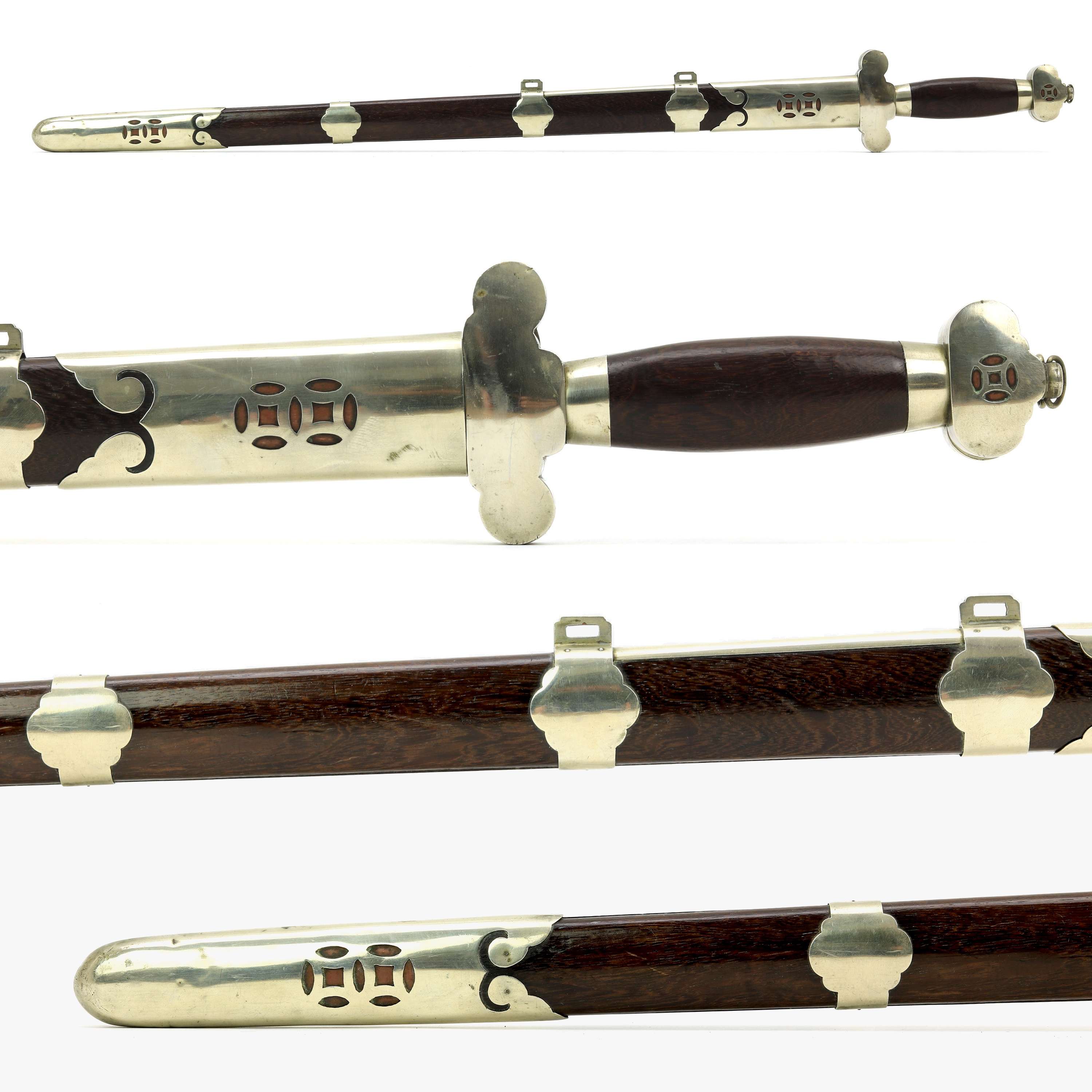 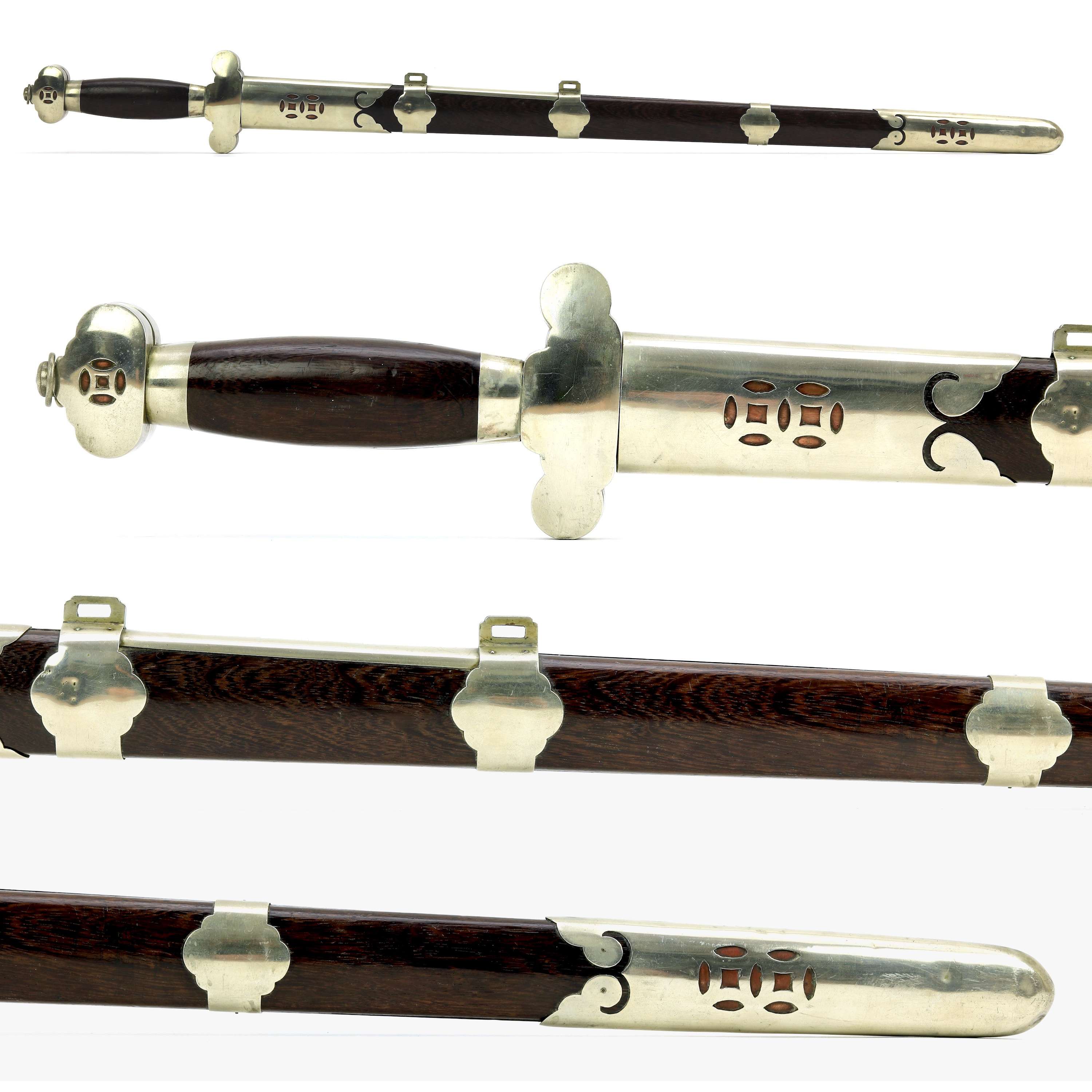 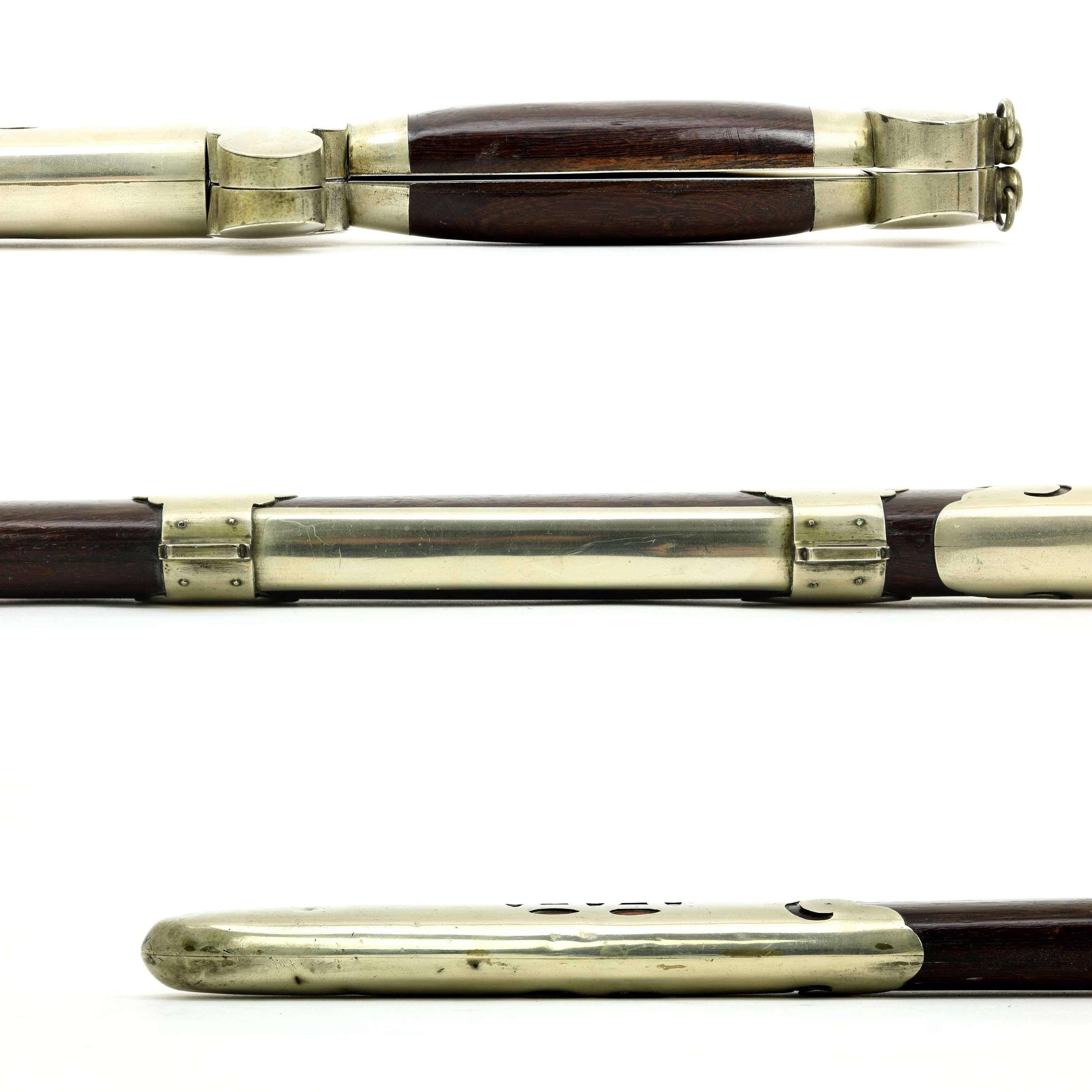 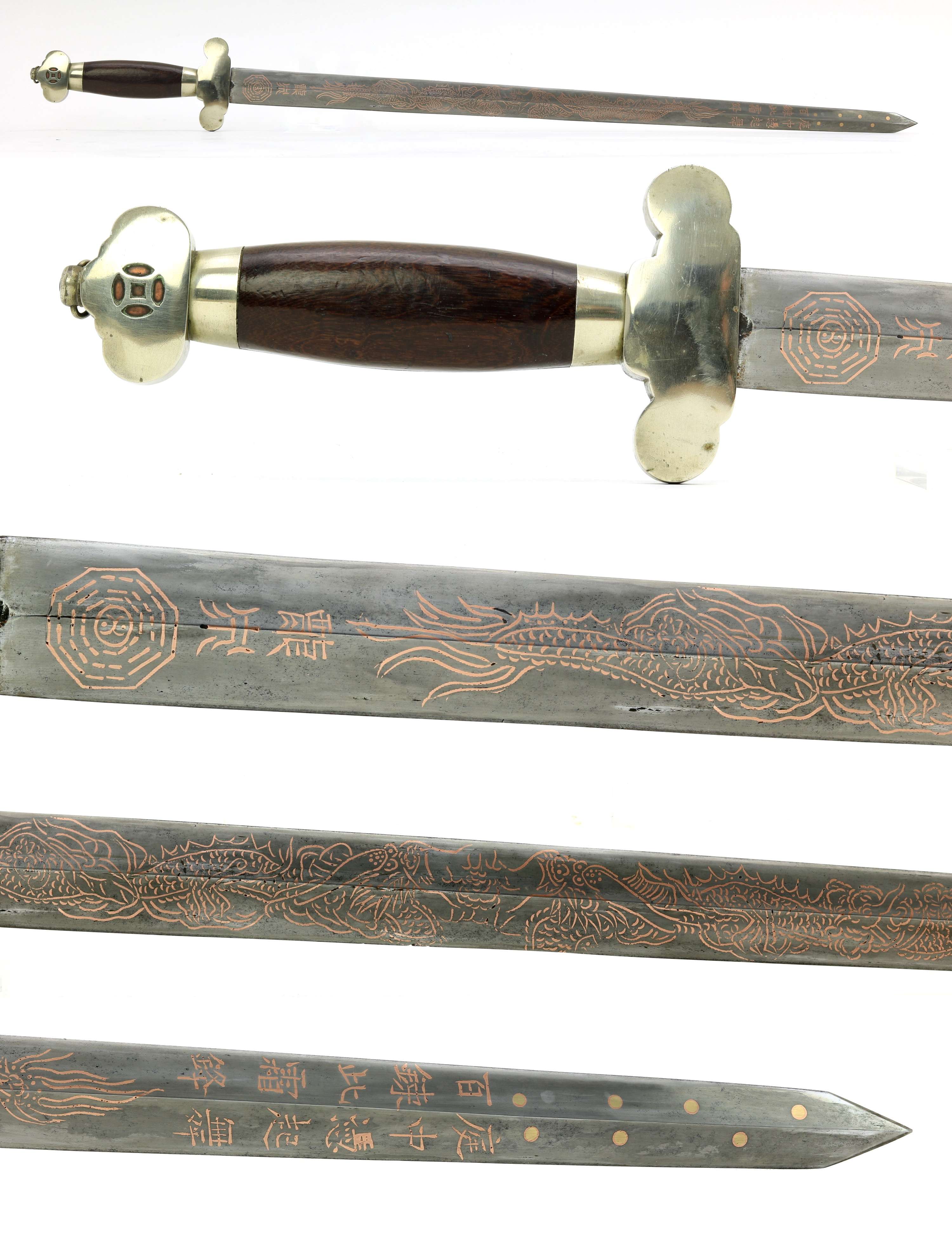 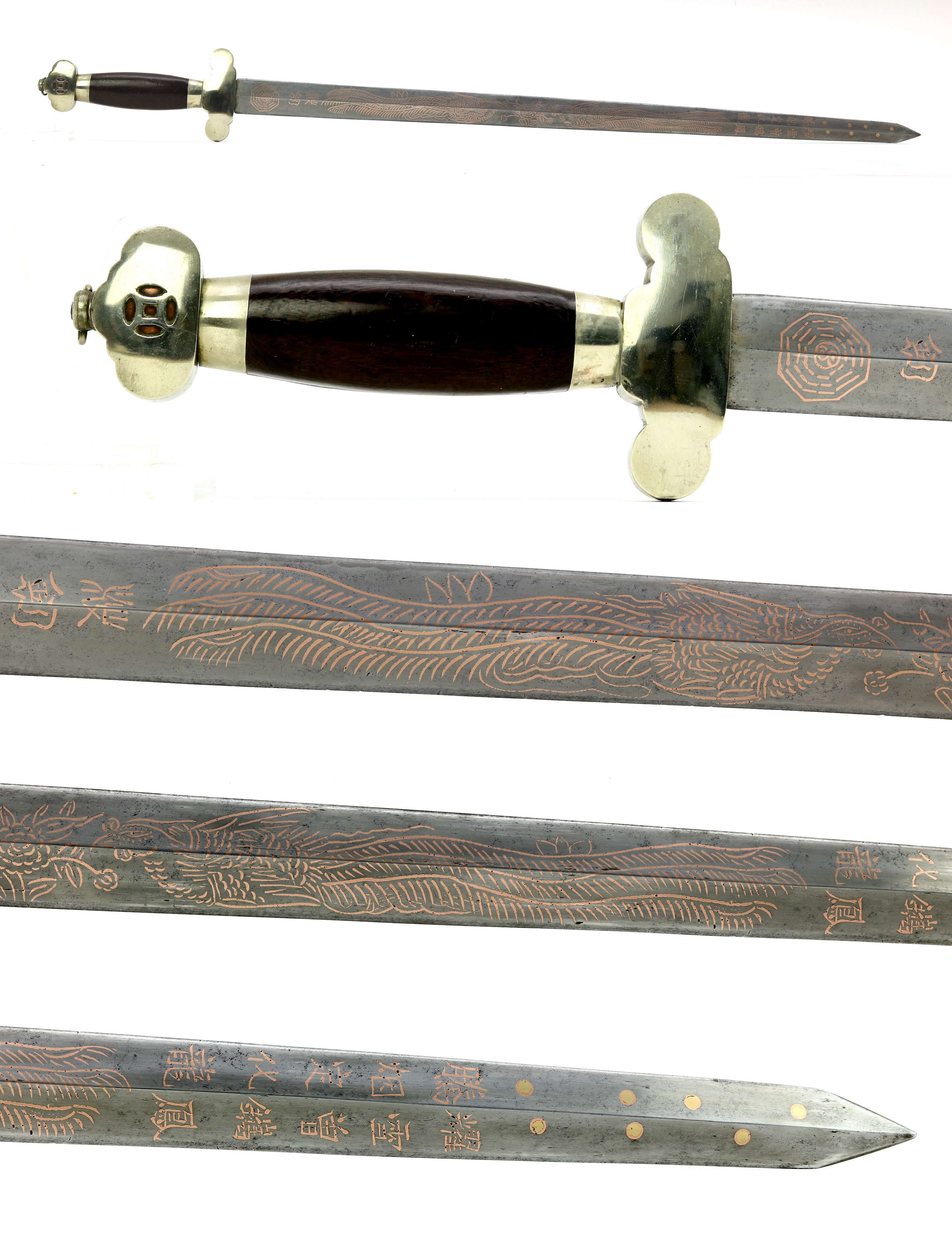 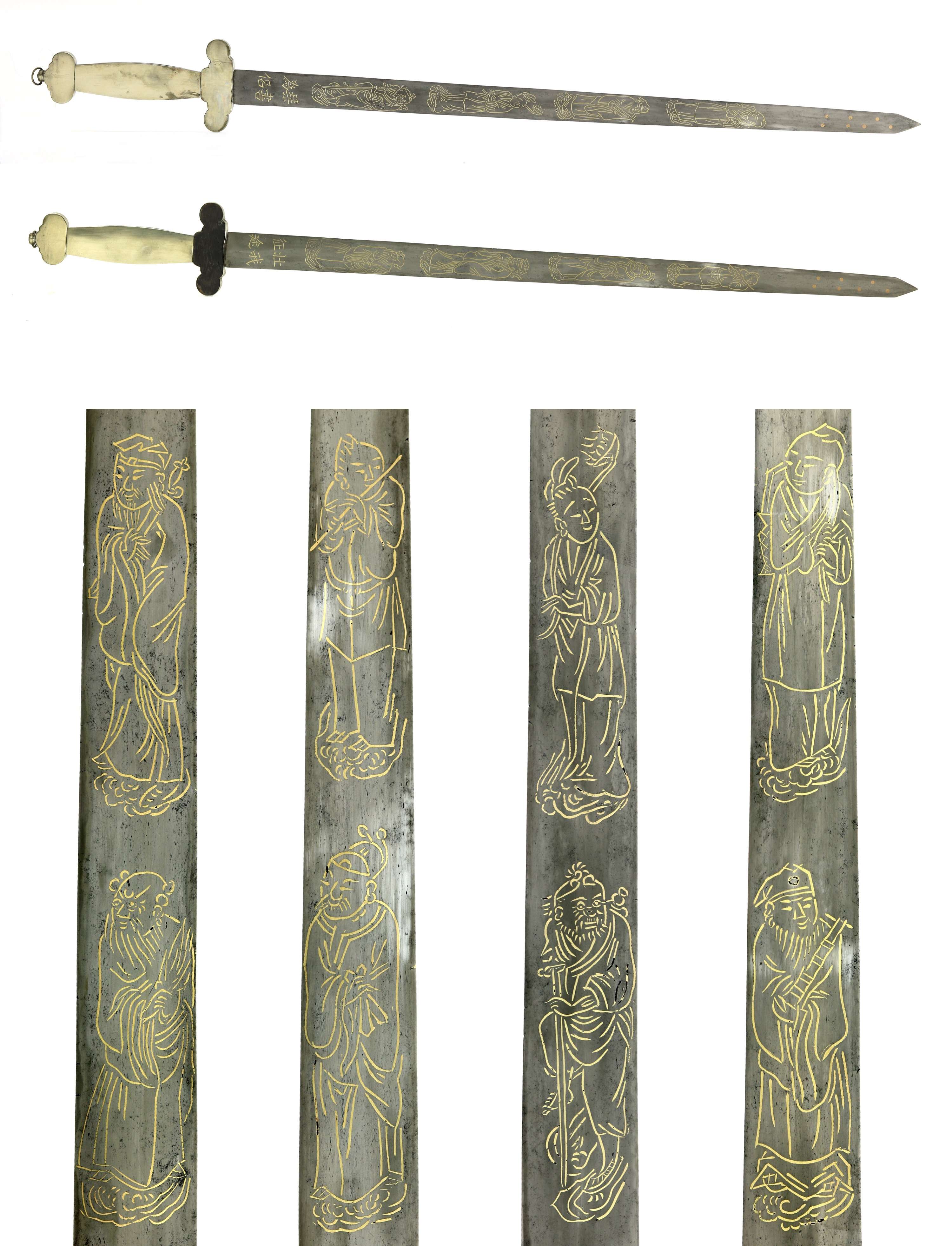 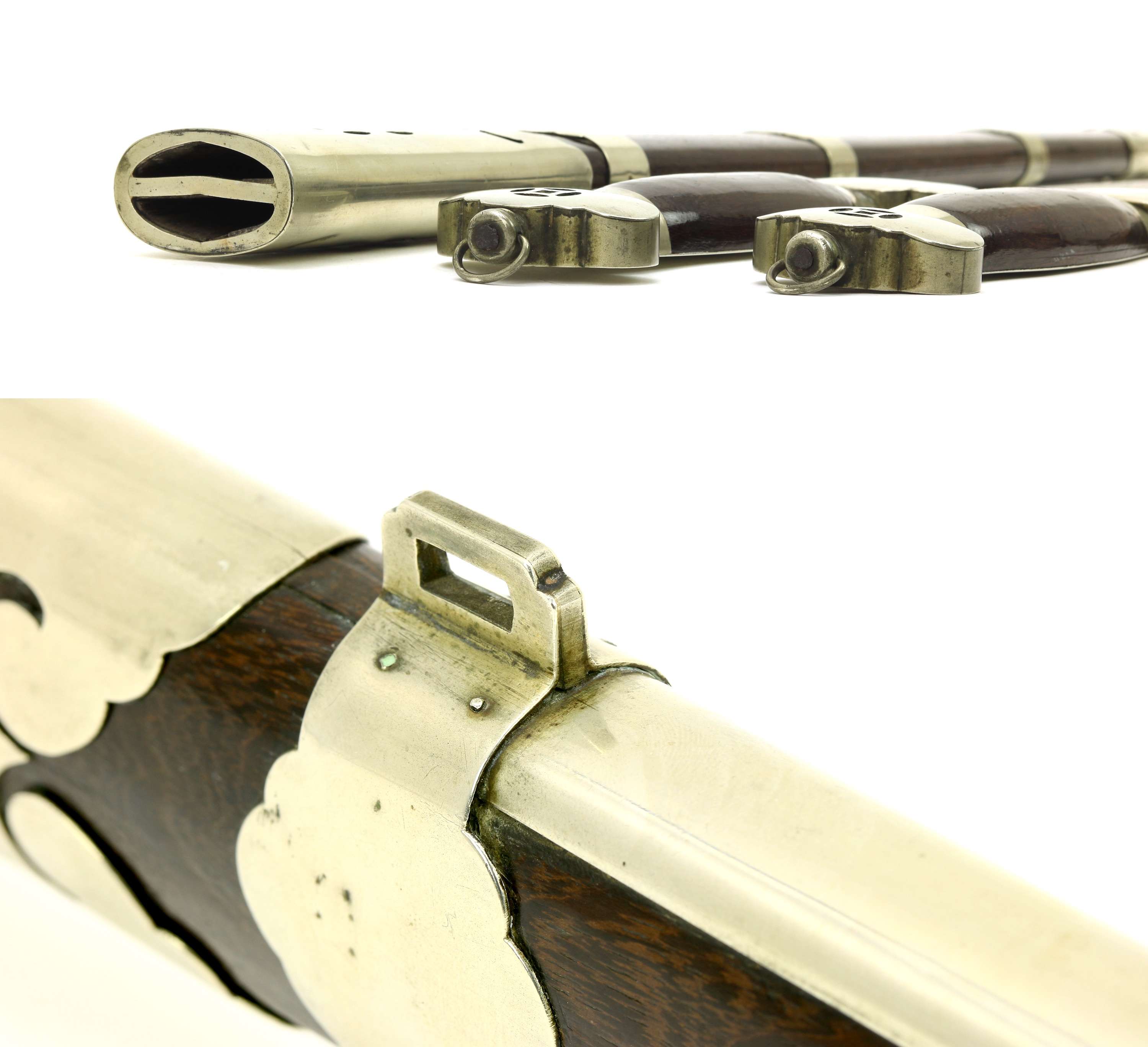 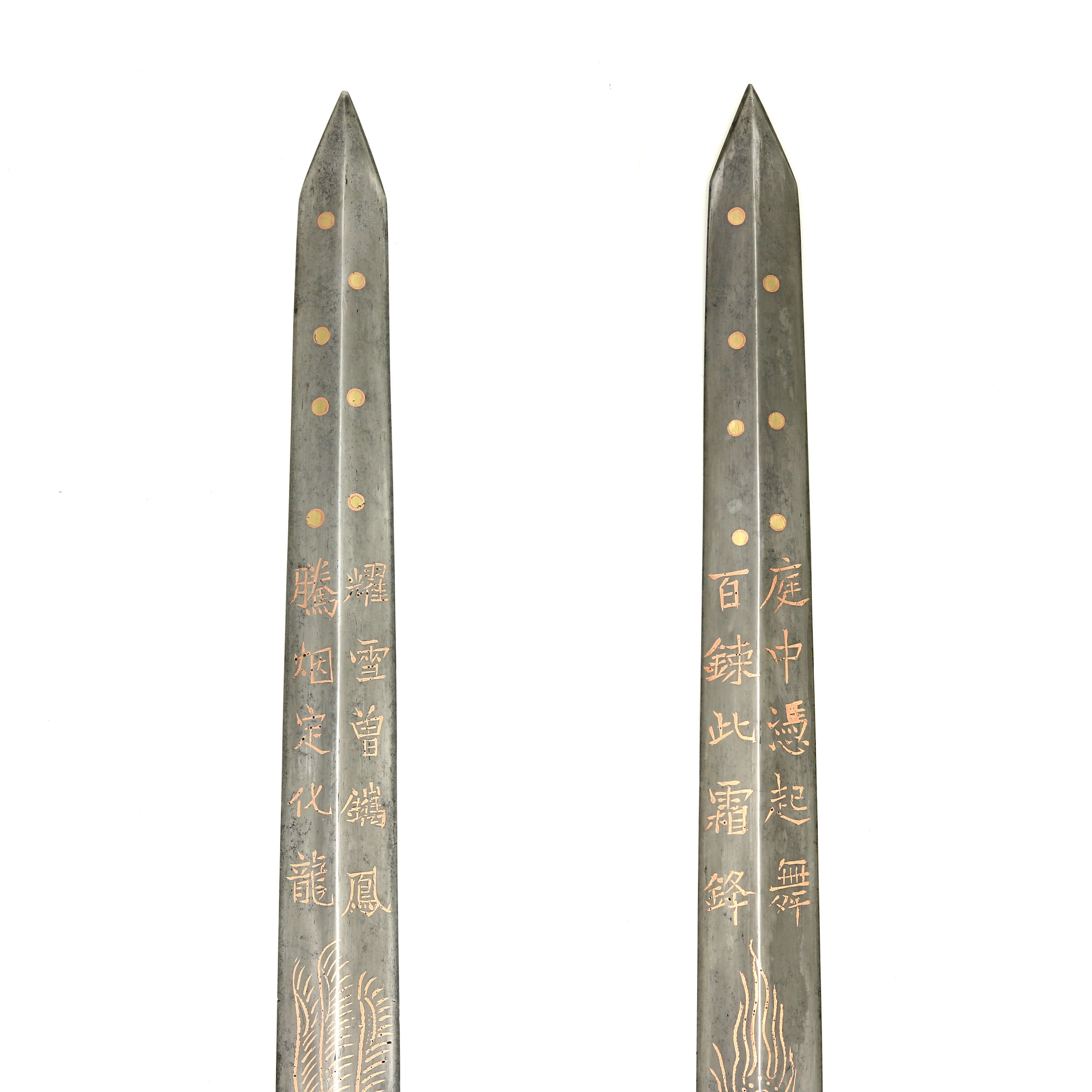 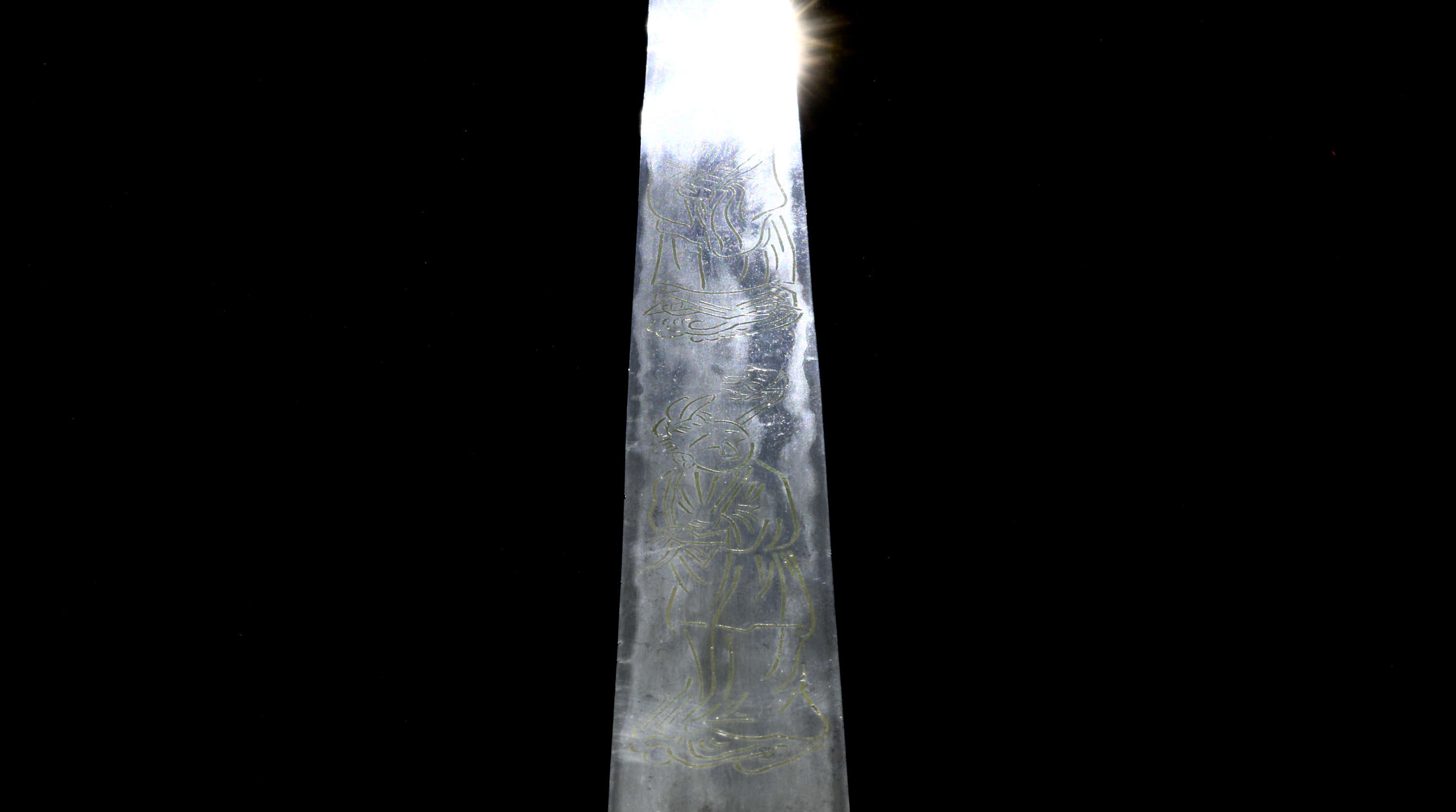 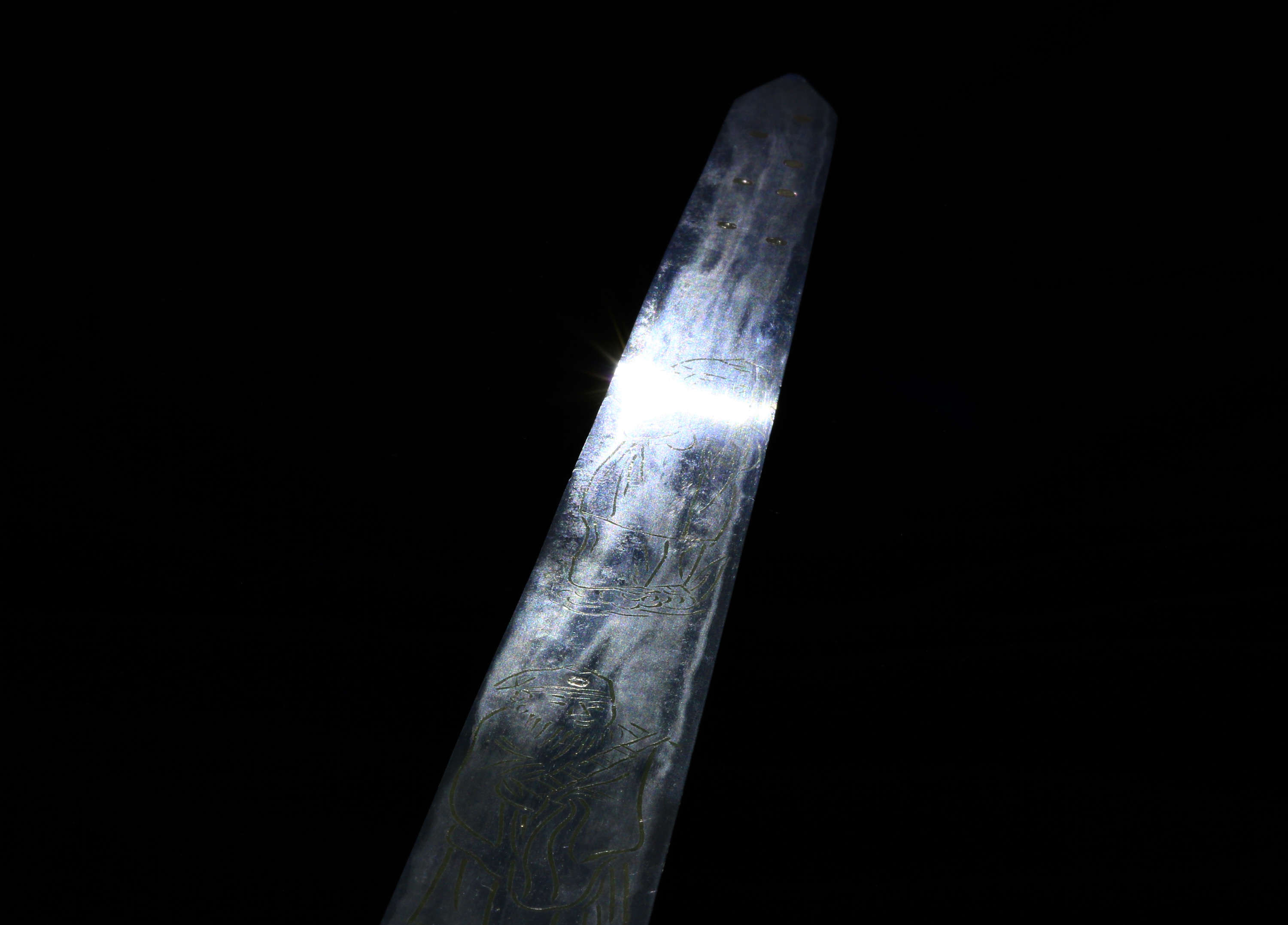 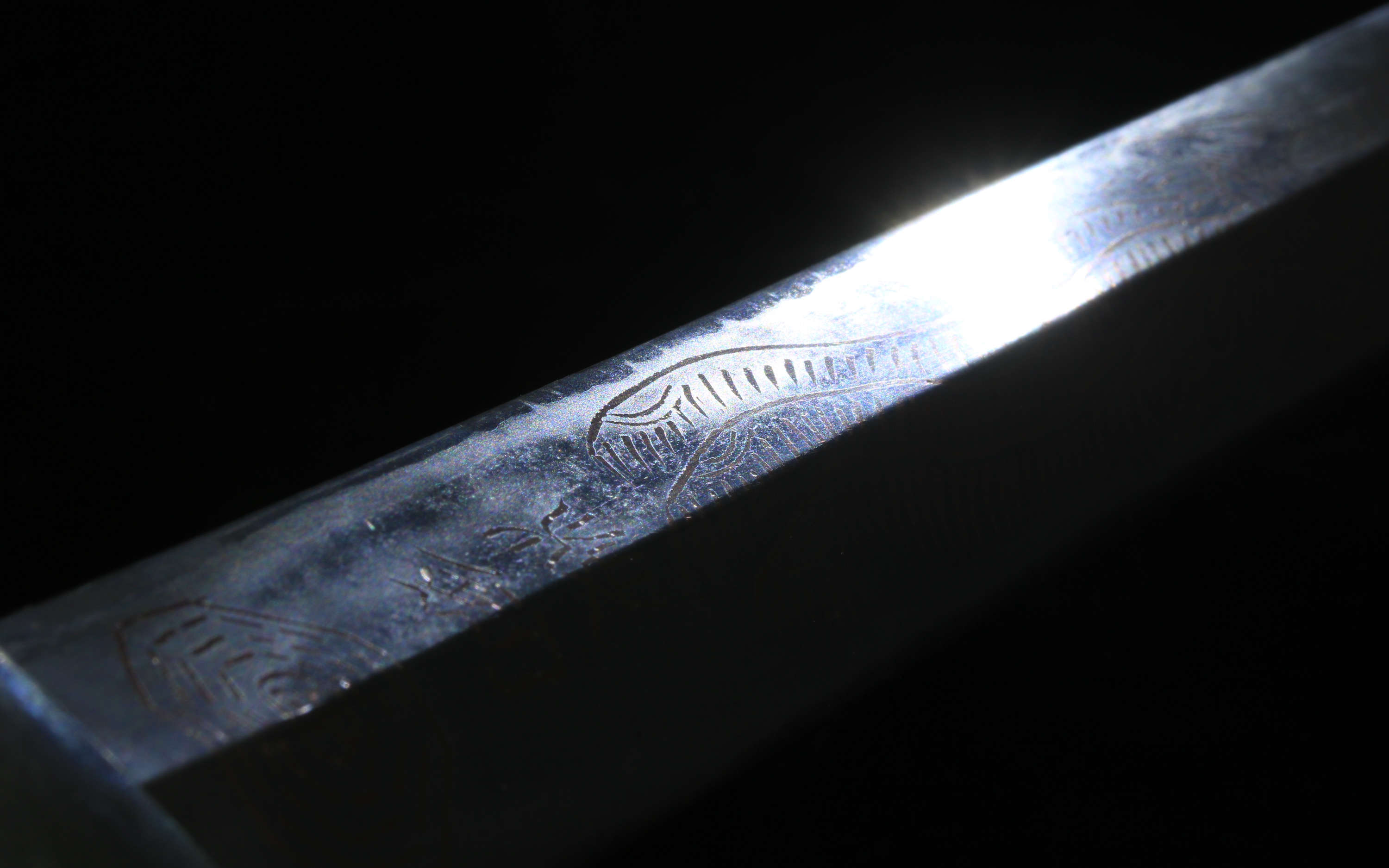 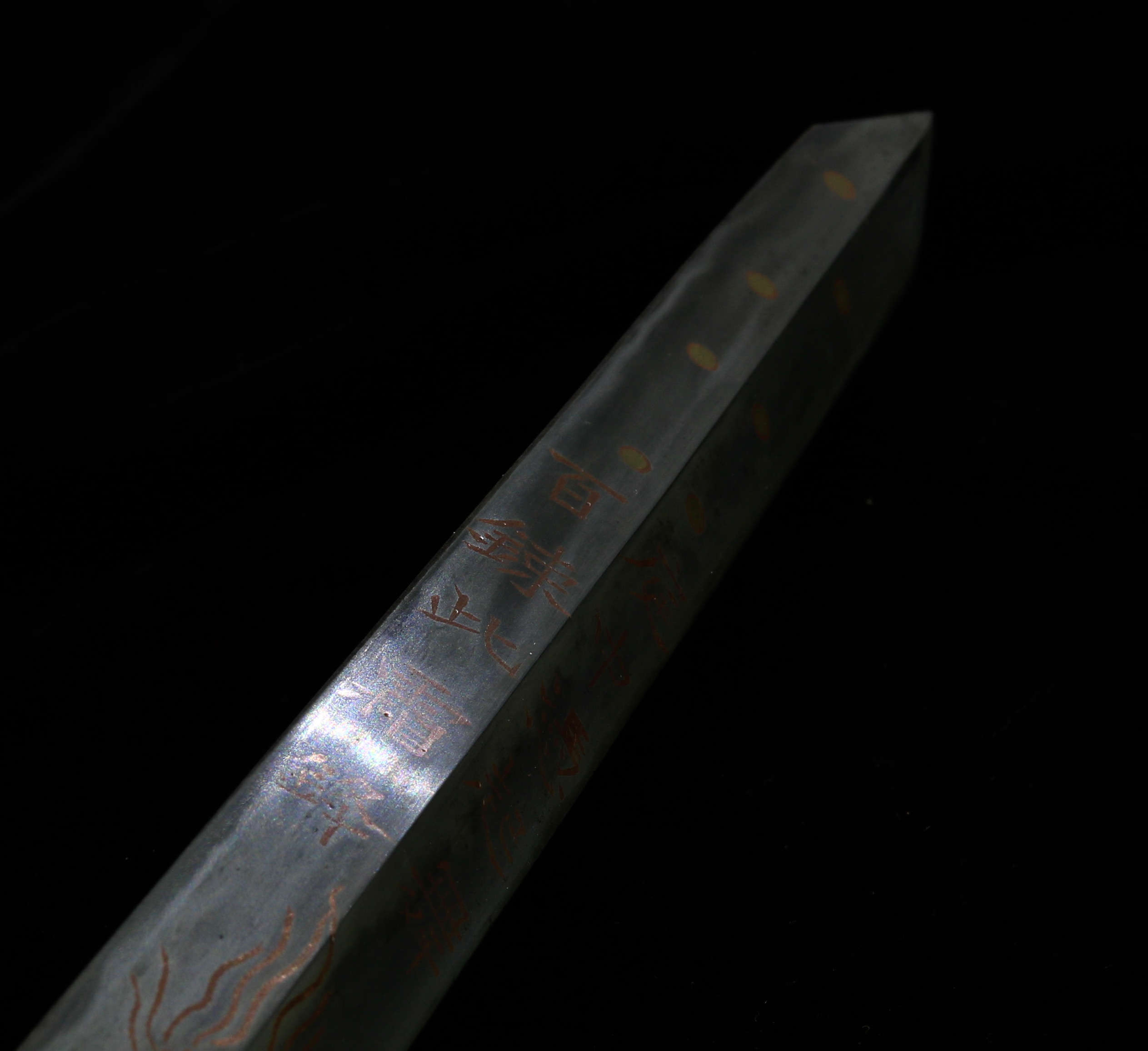 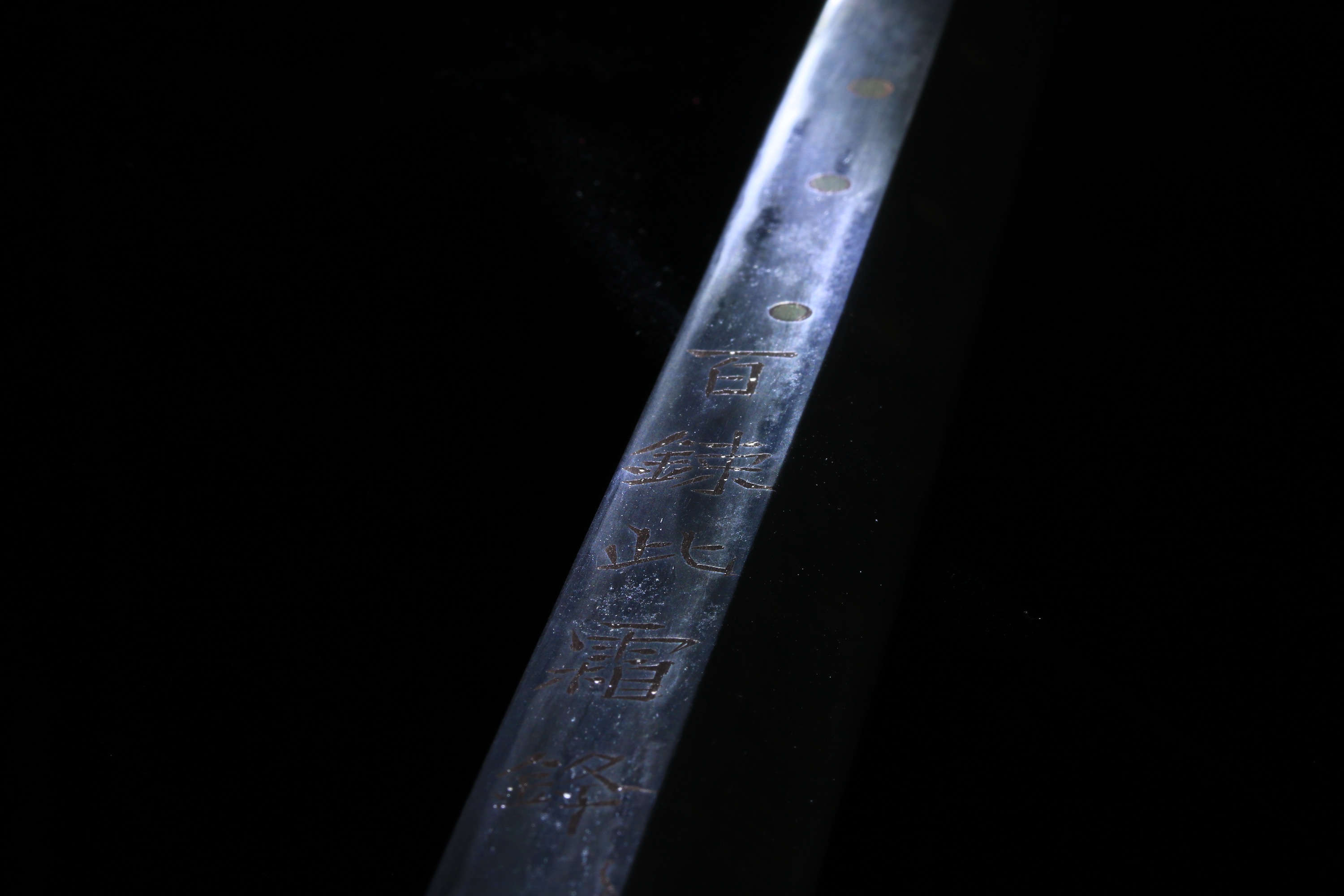 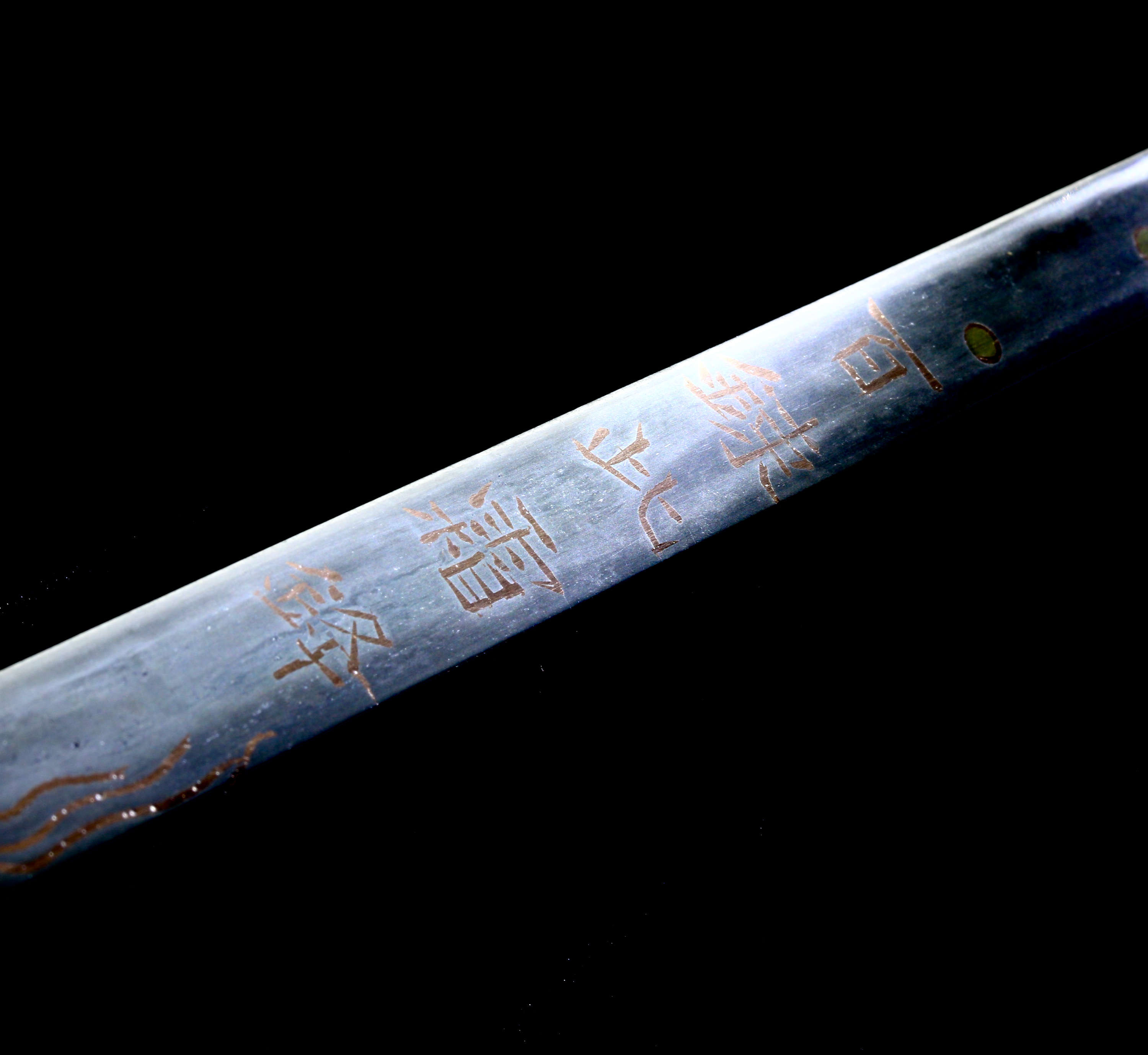 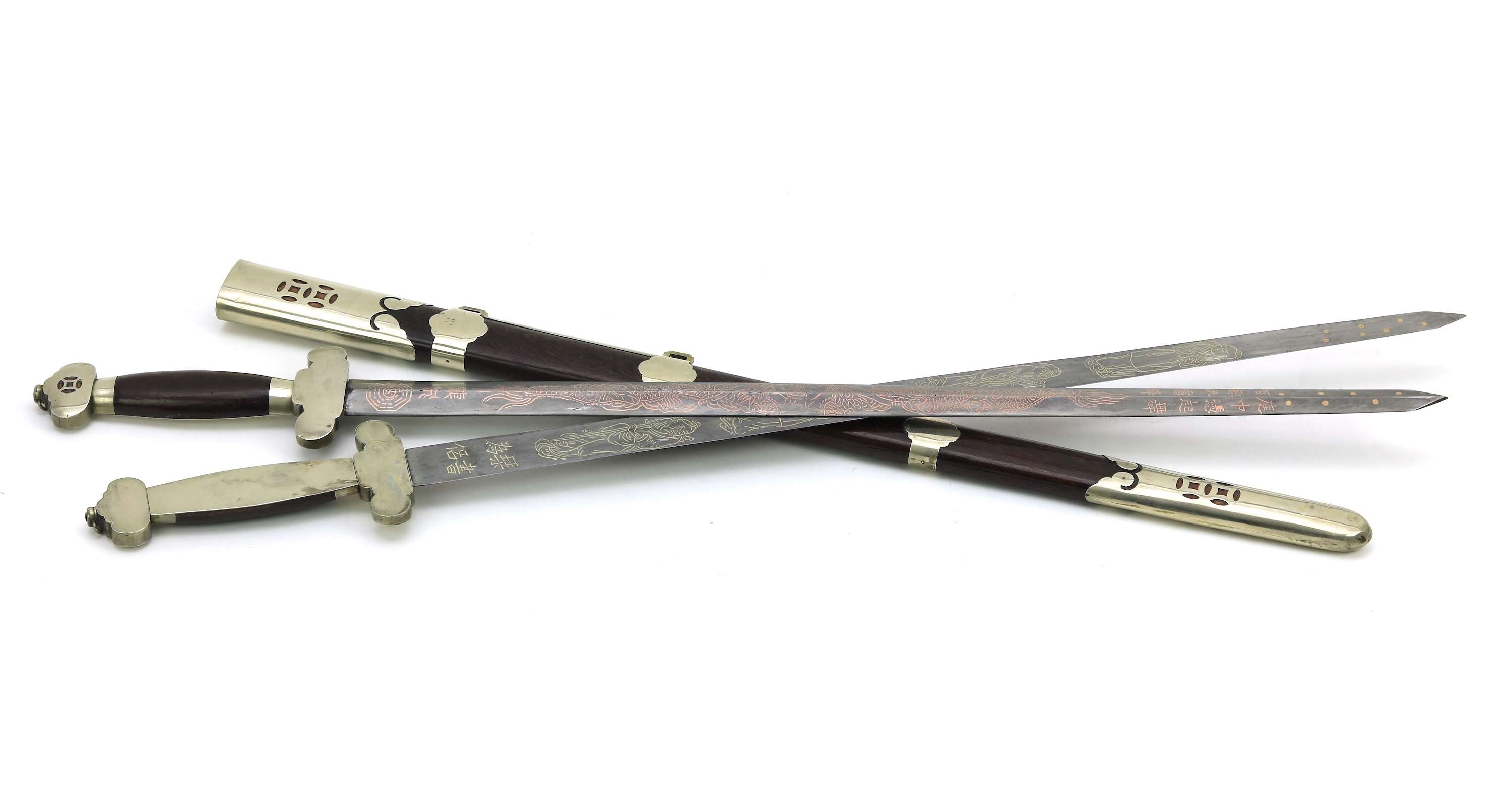