An interesting and early Indian sword, a predecessor of both the Indian pata and the katar. Such weapons first emerged in south India in the 16th century and are primarily associated with the Vijayanagara empire that ruled much of southern India until the mid 17th century. With the original name being lost in time, I will call this piece a Vijayanagara pata.

The Vijayanagara was an alliance of many smaller Hindu kingdoms that unified in an attempt to stop the Muslim armies that were invading from the north. The Hindus set their differences aside as the Muslims were a far greater concern that threathened the Hindu lifestyle, ravashing temples and forcing people into conversion.

It is probably because of this new threat that the late Vijayanagara period saw a rarher rapid development of two Indian weapons that would become a staple of Indian arms culture for centuries to come.

The hilt is typical for its period, consisting of an H shape with two bulging handle-bars. The hand is protected by two widening sidebars and a recurve hood on top. At the end of the hood is a small makara head, a mythical monster. Apart from being ornamental and talismanic, the makara also fulfills a practical function: To stop anything that hits the hood from sliding off the end and hit the arm.

At the back of the hilt there is a loop that goes from the side-bars around the hood, an earlier feature that would be omitted on later examples. It also has a second protective plate running between the side of the hood and the sidebars on either side, connected to the loop on top, offering further protection and reinforcement between hood and sidebars. This is a rare and unusual feature.

The blade is held by two long langets and three rivets, which is typical for South Indian construction of all sorts of daggers and polearms. There are rudimentary decorations on the base of the langet, now largely worn.

The outside of the hilt is in rather good shape for its age. The inside has a nice, deep brown patina. 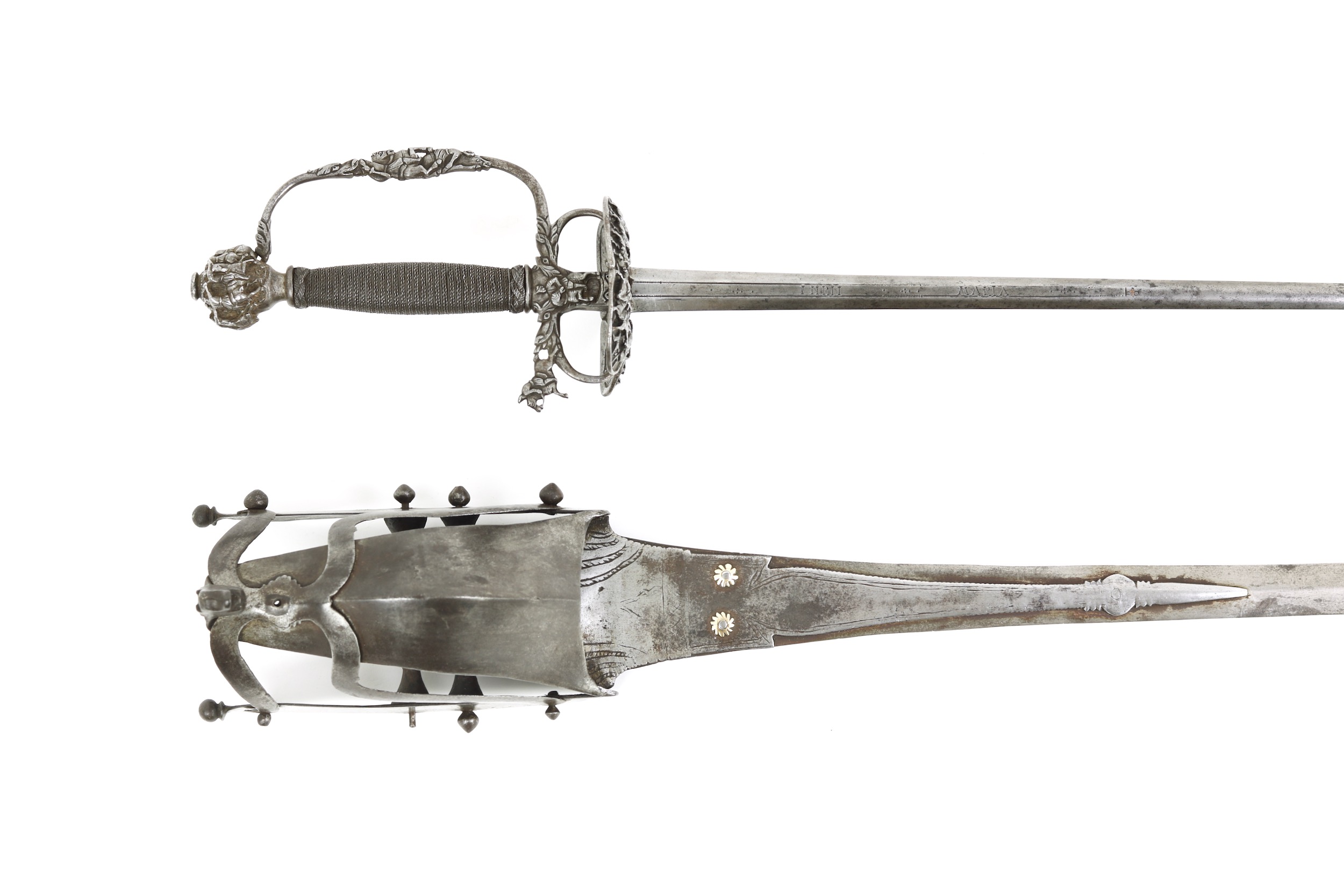 Compared with a Dutch smallsword of the 17th century.

As this type of weapon developed, one main branche would become shorter and shorter, eventuelly lose the hood to make it easier to carry on a daily basis and develop into the dress katar that we know from the 17th to 19th centuries. This is the weapon we generally call katar today.

I think the loss of the hood represents the shift from the Vijayanagara katar as a primary weapon, sometimes being seen wielded one in each hand, to the katar as a secondary or backup weapon later.

Another offshoot of this weapon's development would keep its length, but would enclose the hand entirely in a gauntlet for protection.

Overall in pretty good condition for its age, with no excessive pitting or damage. No recent repairs or replacements. One of the nuts holding all the parts of the hilt is missing, one brass washer on the langet missing, not all nuts are the same shape indicating working life replacements.

I could find only one similar example, in the Metropolitan Museum in New York, accession number 36.25.929. It is in poor, damaged condition, with a broken hood loop. The museum dates it 17th century, following Stone's notes who bequeted it to the museum in 1936.

A rare example of a rapier-like sword in the hilt of a Vijayanagara katar, representing some of the earliest forms of both the later katar and pata. An academic piece for the collector or institution that is interested in the development of arms over the ages. 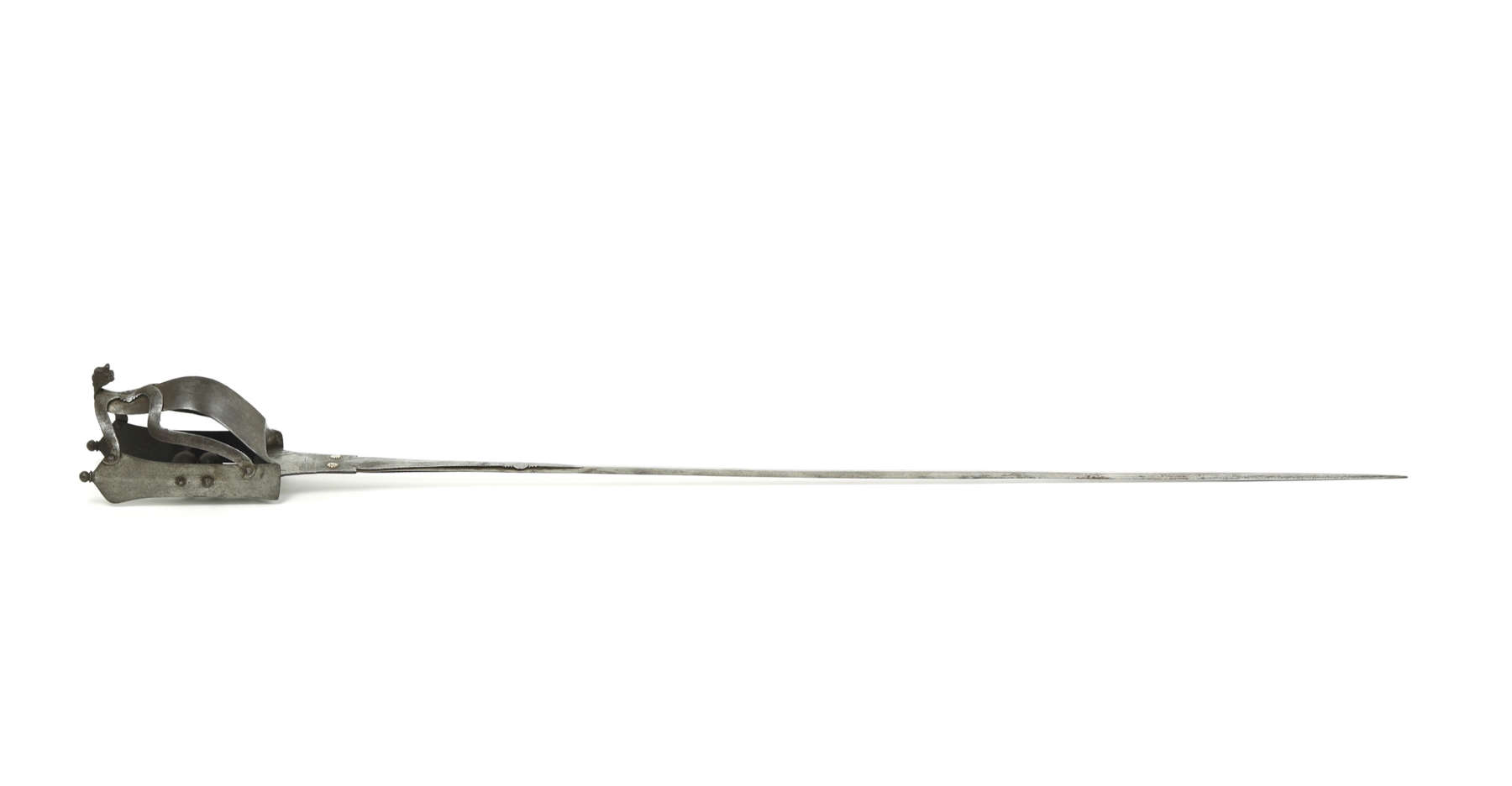 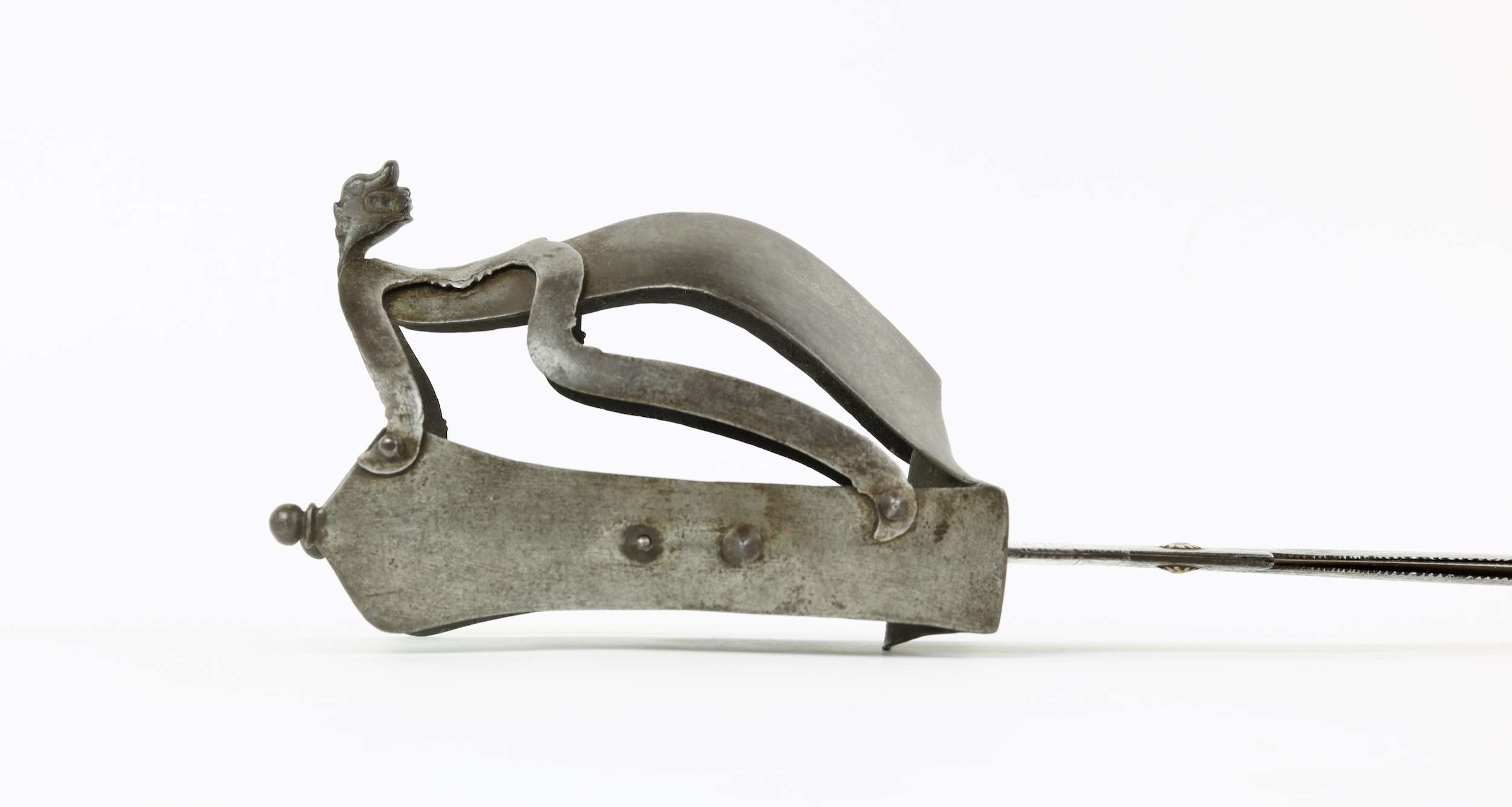 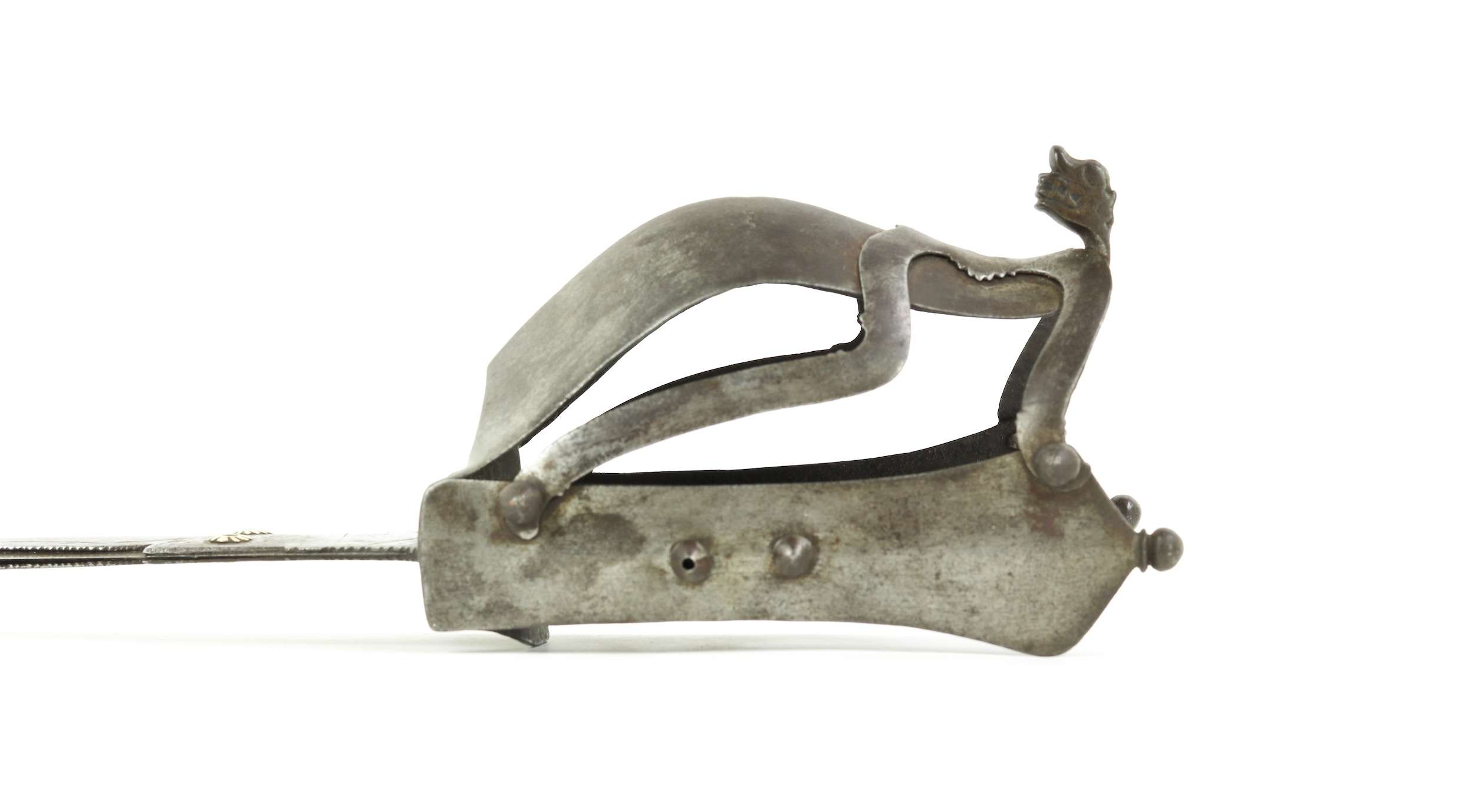 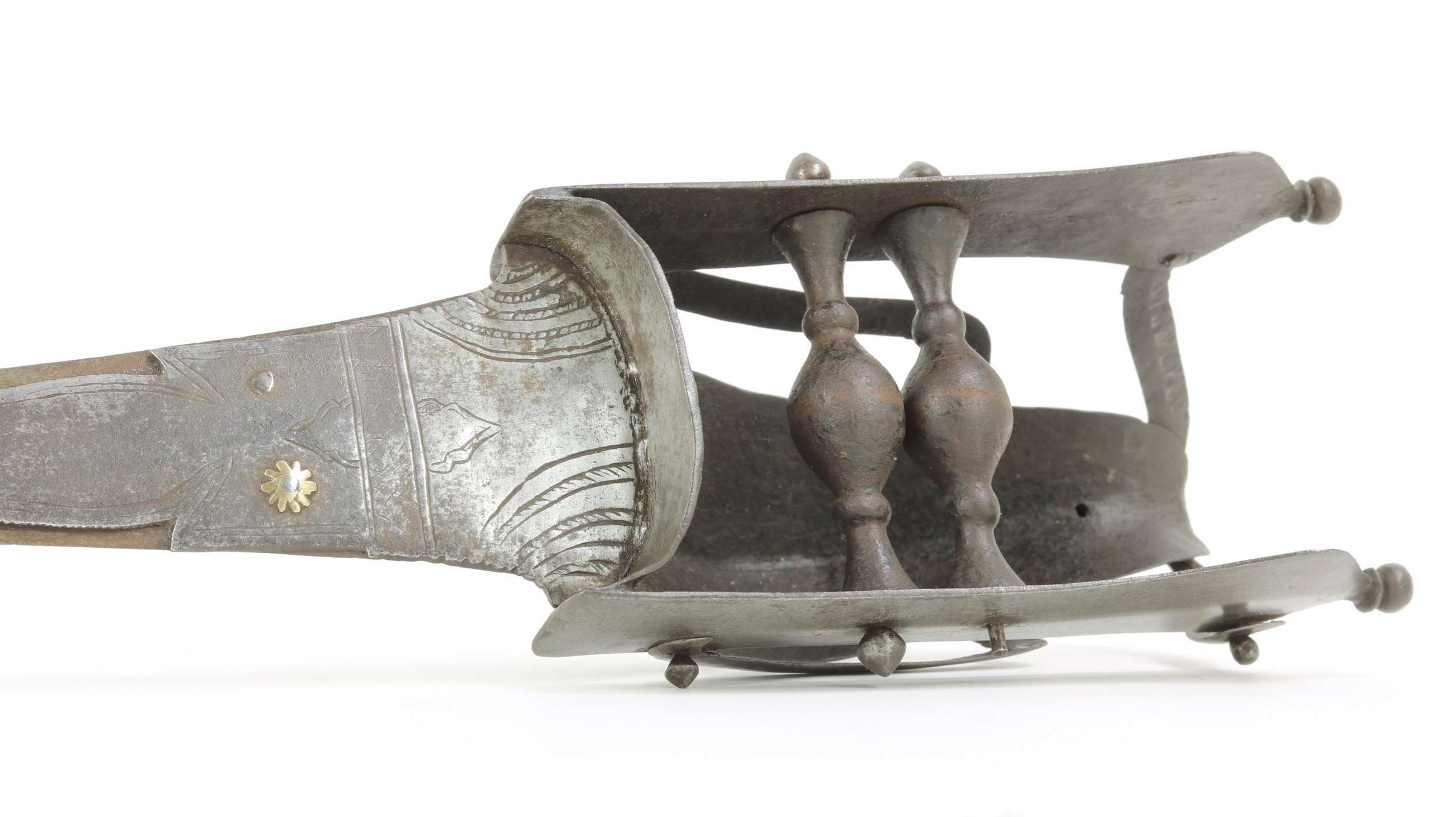 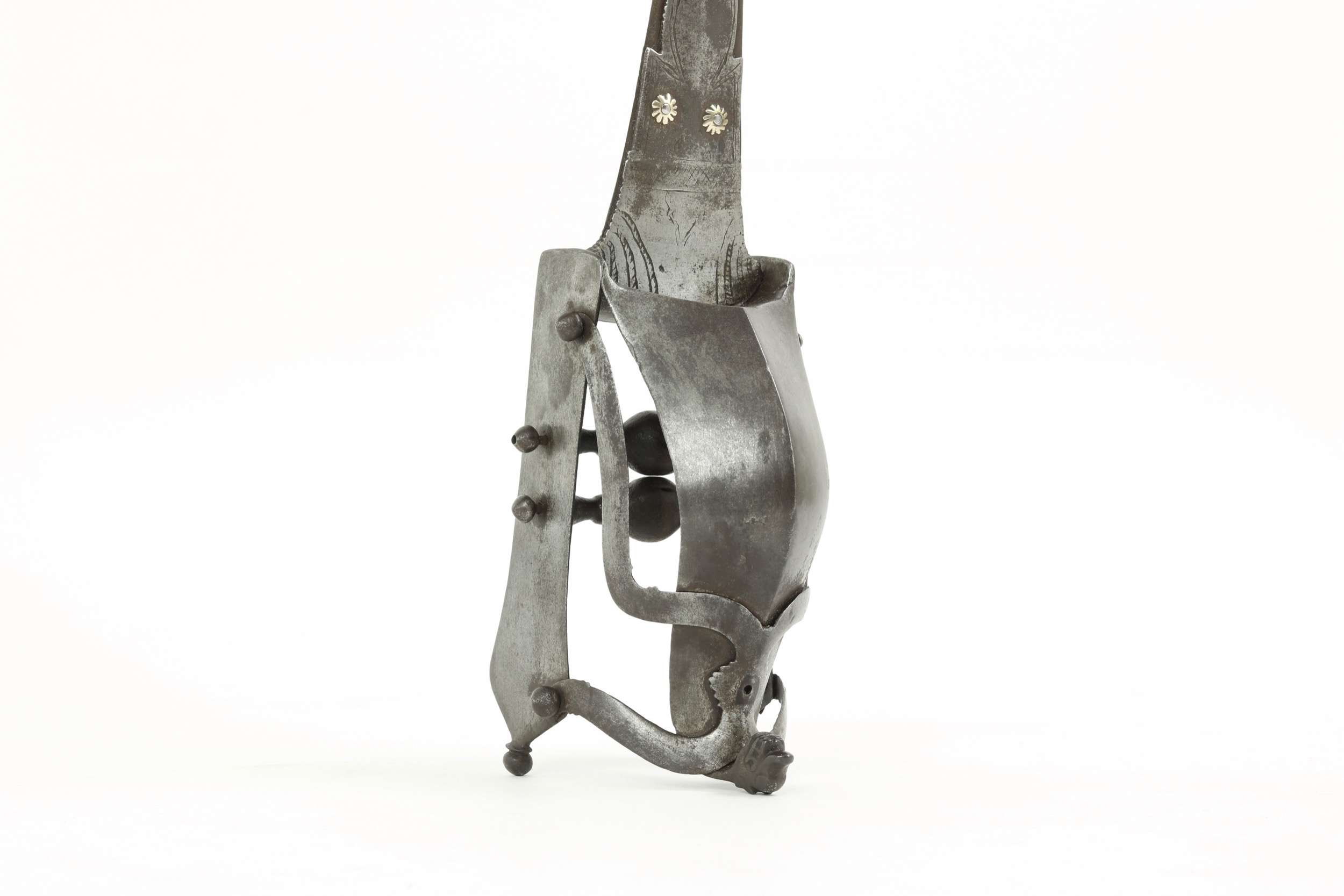 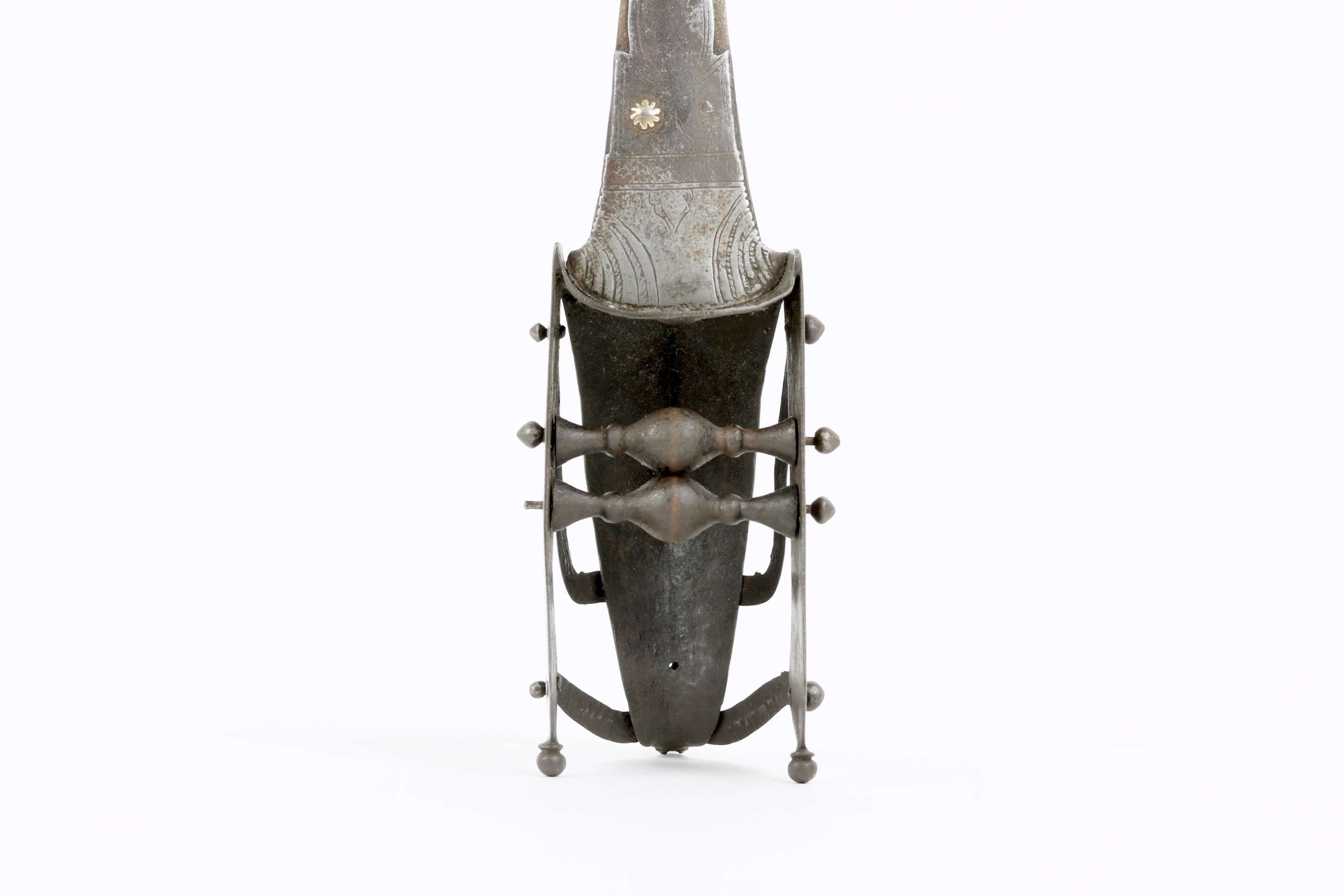 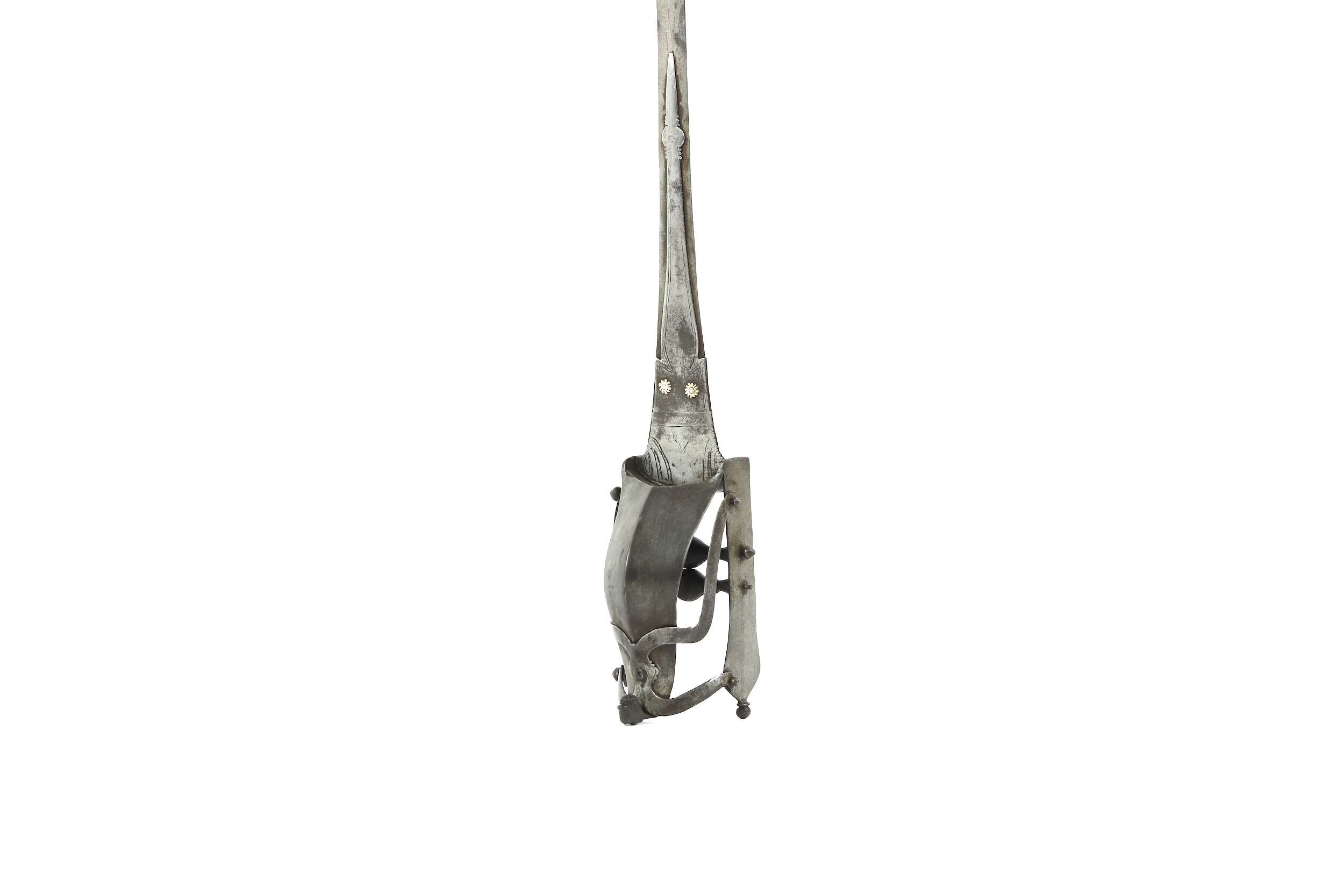 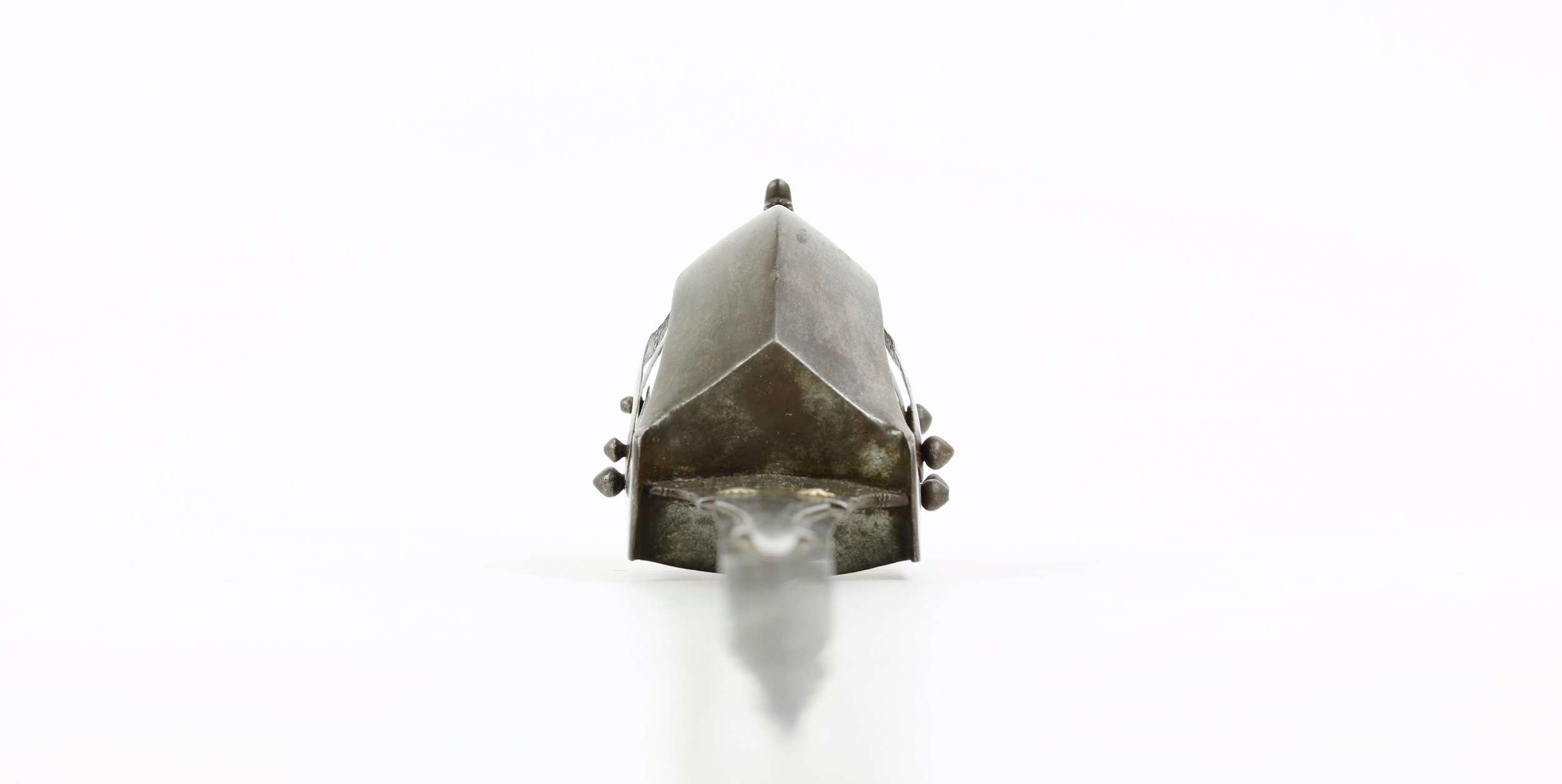 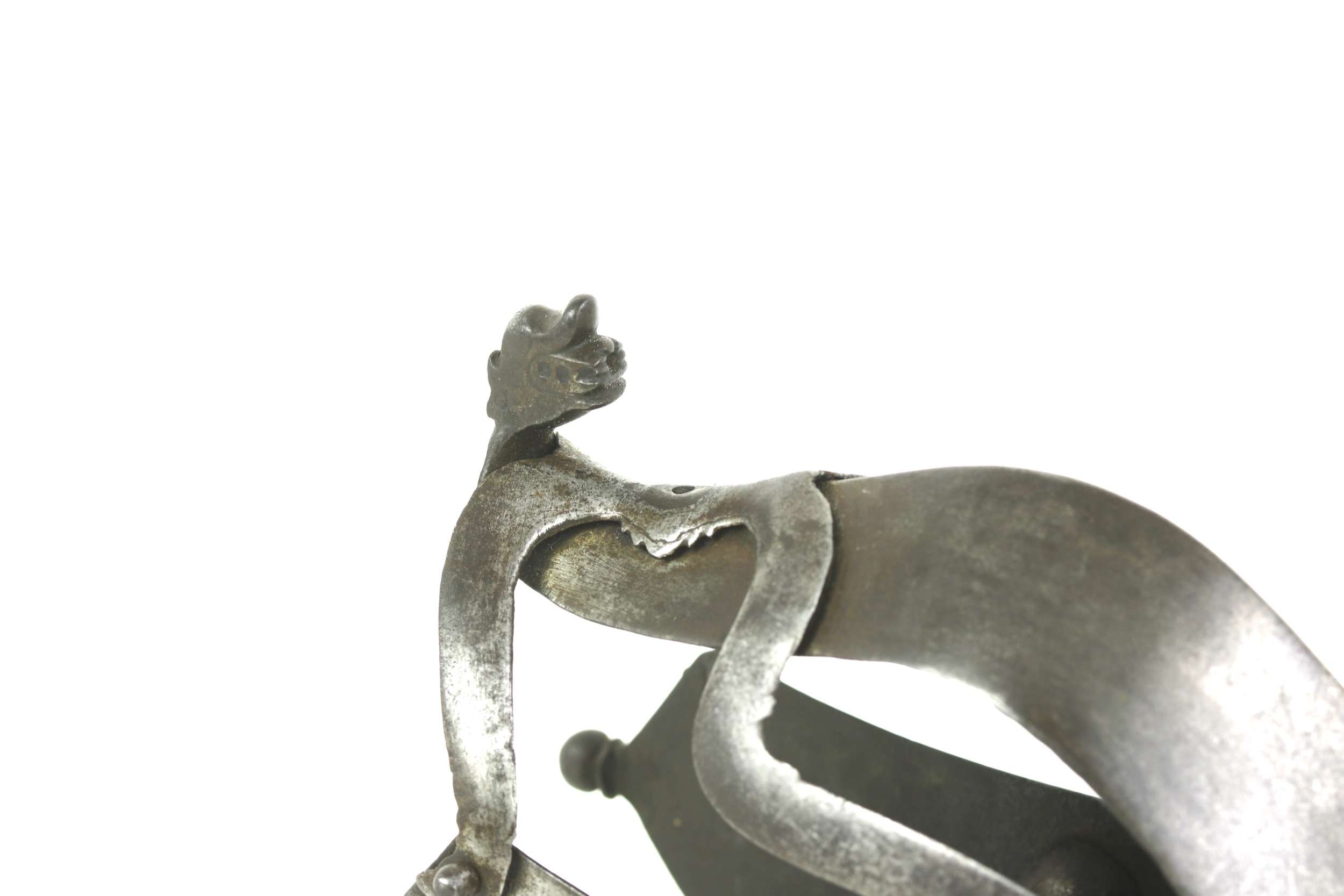