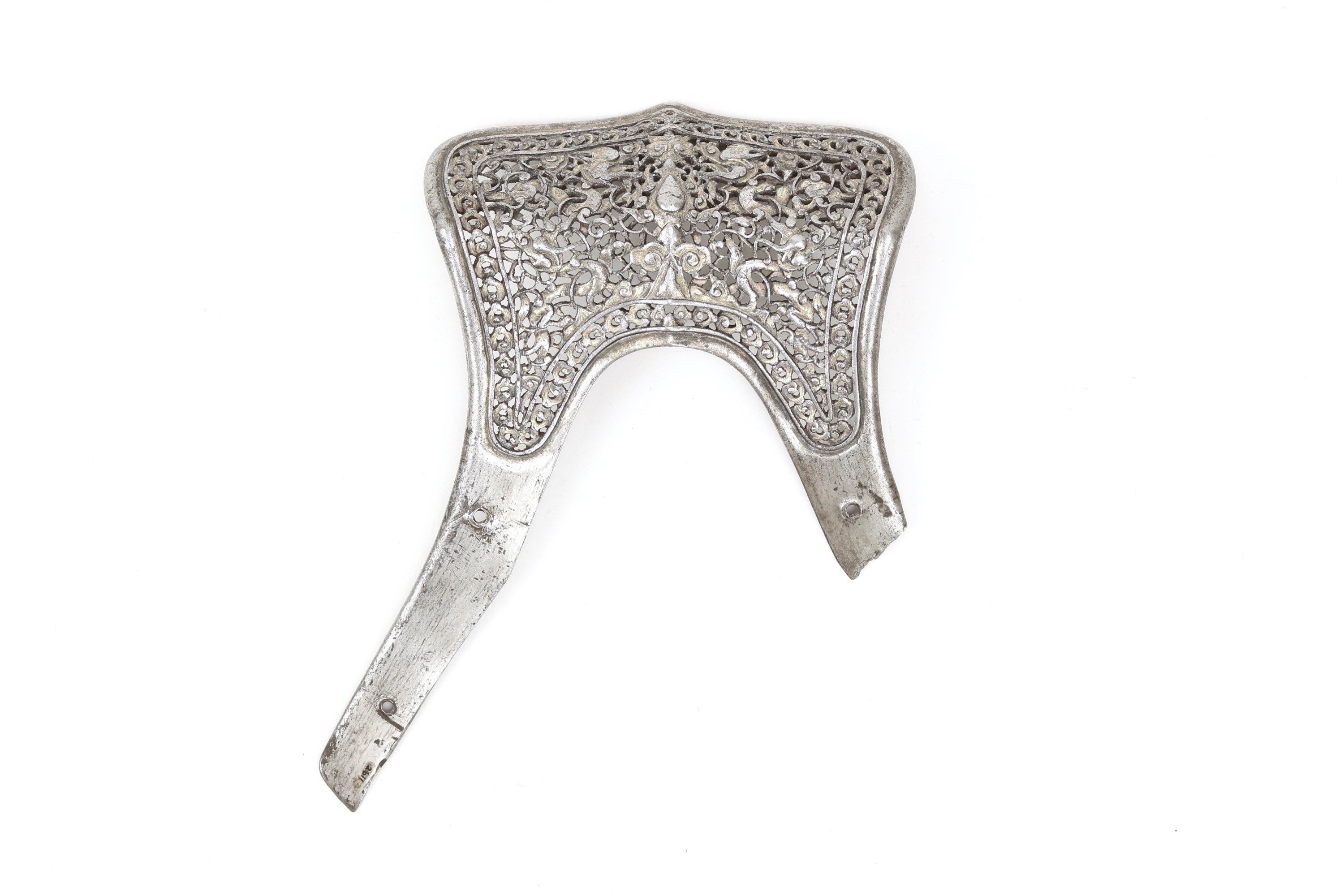 A pierced iron plate that went on the pommel of a saddle. At first glance, it seems like a typical example of pierced ironwork in the Tibetan style but it is eccentric in more than one way.

Observed from the front it has waisted sides and a widened top with a subtle peak in the center. Observed from the side it shows a fairly sudden backward bend in the top section of the plate. Close inspections shows it is deliberately made that way. While the general form is more often encountered among these, the peak and the bend are elements I have no yet encountered before.

It is elaborately pierced and chiseled with designs of four dragons in scrollwork around a ruyizhu (如意珠) or "wish-granting-jewel" positioned on the center line. It hovers above a pointy rock emerging from the sea with a stylized cloud above it. The jewel itself is positioned on a bed with a stylized lotus bud on top and flames all around. On top is another highly stylized cloud with three pointed elements on top.

The entire pierced section is surrounded with a double rim, between which are a series of stylized clouds.

The piece is plated in its entirety in sheet silver, adhered by hammering it to a crosshatched background. It was then fire-gilt, with a fair bit of the gilding remaining until this day. You can still see some of the blueish and reddish hues created by the fire that was used to evaporate the mercury during the process.

Unfortunately, one "leg" of the plate is broken but the pierced part is all intact. Almost all of the silver damascening remains, and some of the gold. In good condition overall.

Normally the shape of the clouds and other decorative elements follow a fairly straightforward evolution, by which one can date such pieces. In this case, the rendering of all design elements is somewhat eccentric, making it harder to put a firm date on it. The designs are not typical for work produced during the rise of the Manchus -for which Tibetan style pierced iron was their imperial style as used on saddles and sabers- and the ensuing Qing dynasty and so it probably predates the rise of Nurhaci.

Saddle plates of this general form with widened upper section and flattened top were popular during the Ming dynasty. Some are seen on the Jiajing period (1522-1566) "Departure Herald" and there is an extant Wanli period (1572-1620) saddle in the Honolulu Academy of Arts.

Two saddles with plates of the exact shape have been circulating on the antique market. One was auctioned in China some time ago. At least one of these seemed to have been from the 18th century, as it had a typical dragon and cloud treatment consistent with this period.

All considering, I would say this piece most likely dates from the 16th - 17th century.

There is an old inventory number "1611" scribbled on the remaining leg.

This is the inventory number of Annette McGuire Cravens (1923-2017), philanthropist and patron of the arts who collected archaeological and ethnographic items. She collected for the benefit of the education of herself and others and donated many pieces to institutions, among others 1100 items to the University of Buffalo. She was also known for her meticulous cataloging.

Her obituary can be read at buffalonews.com. 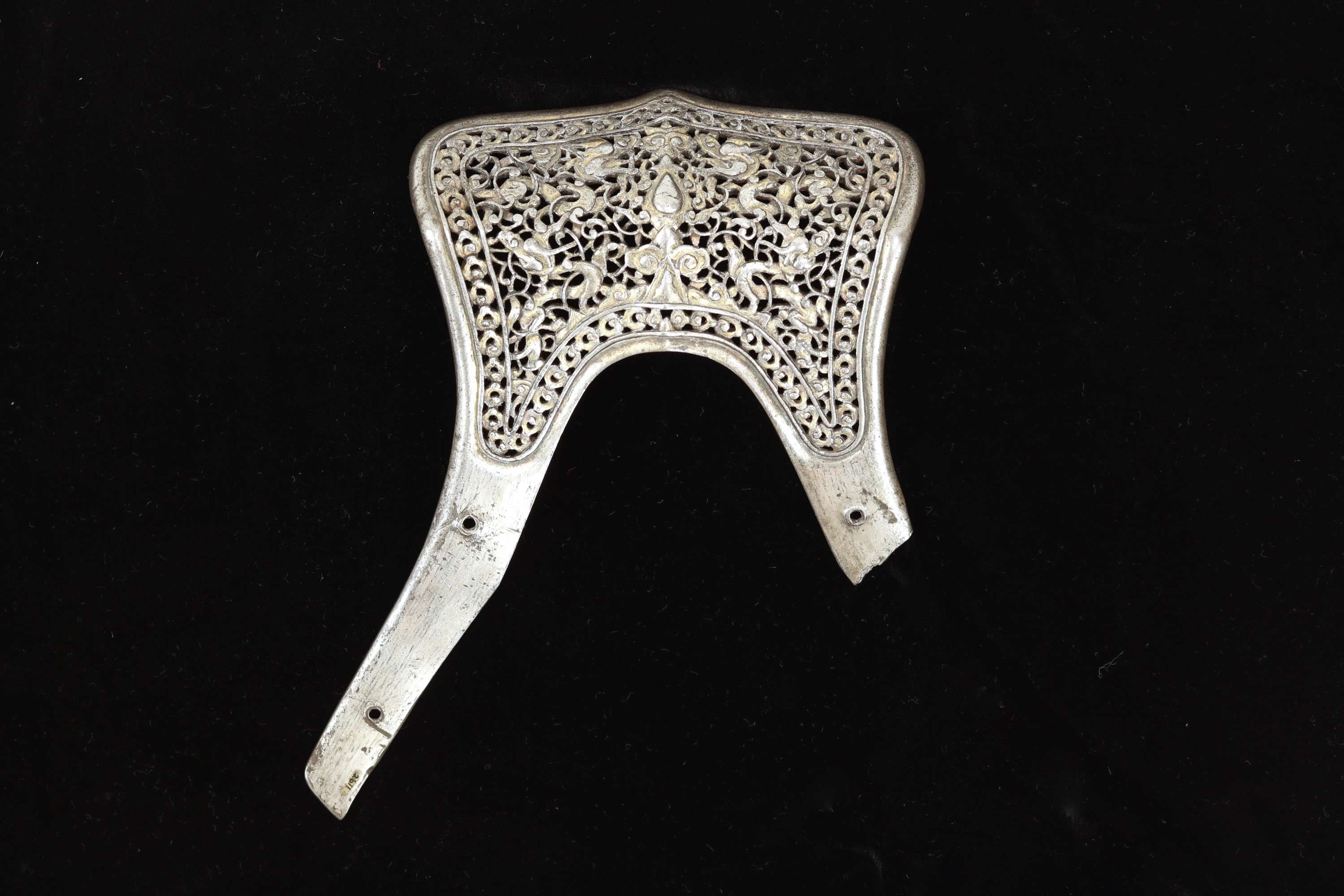 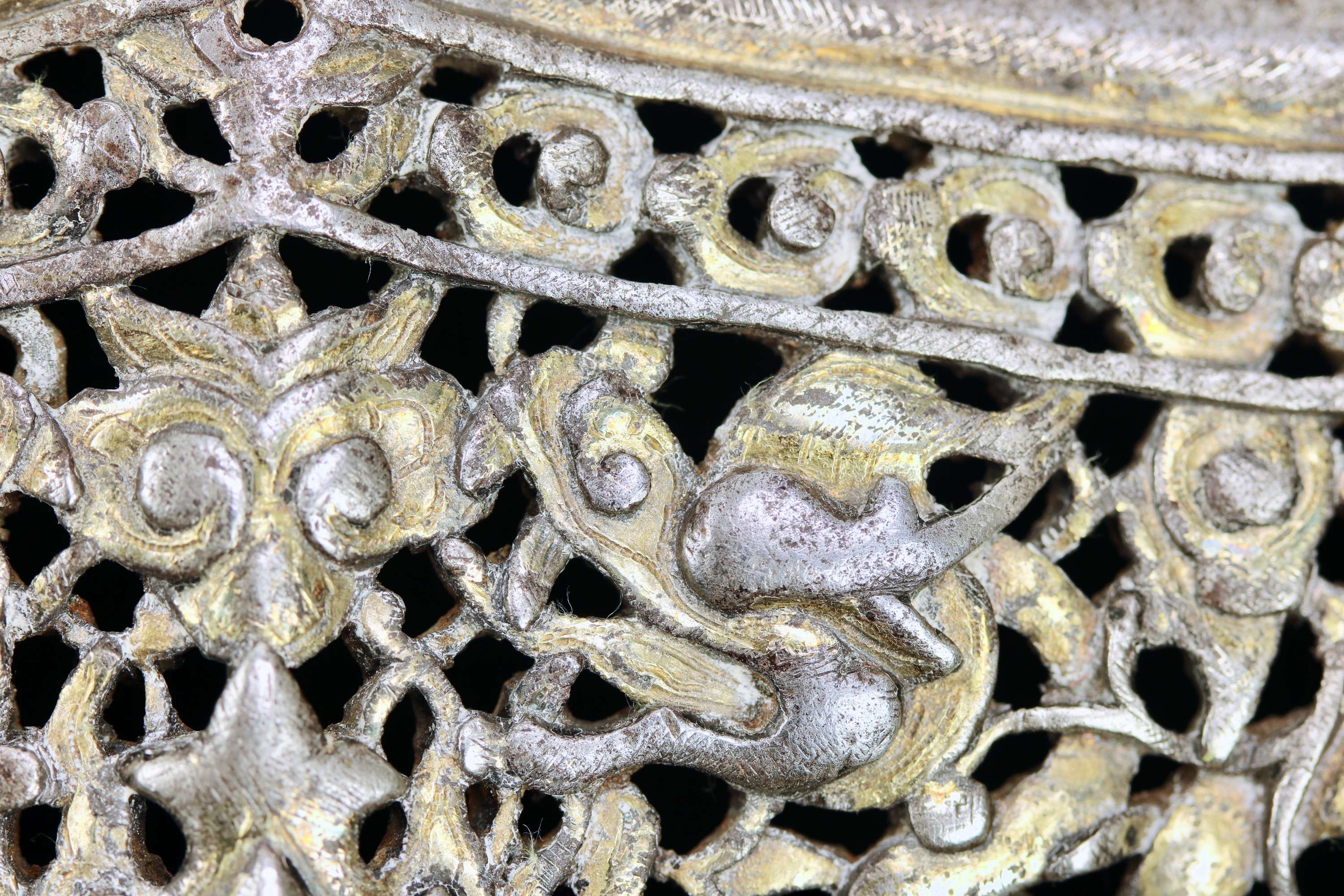 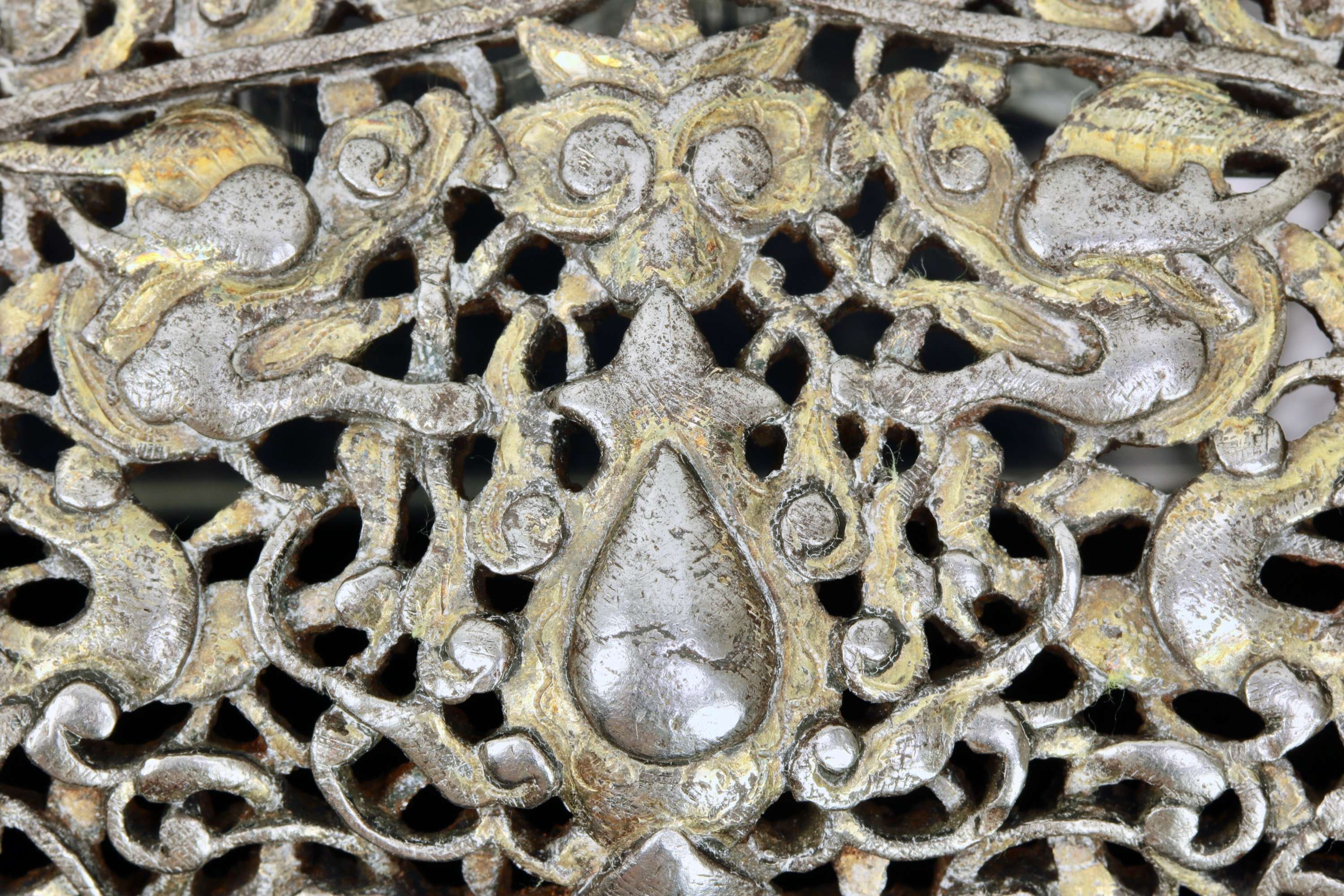 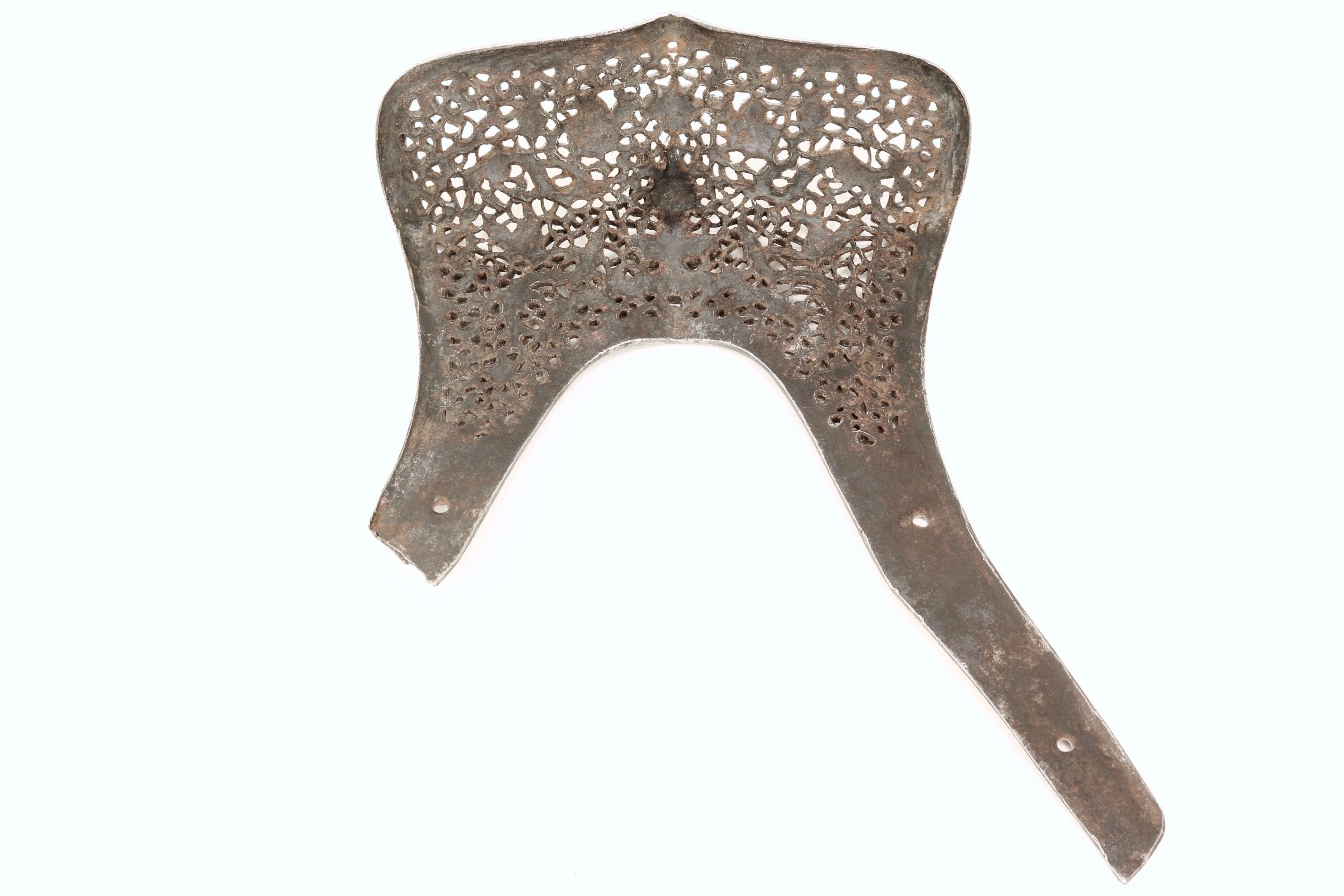 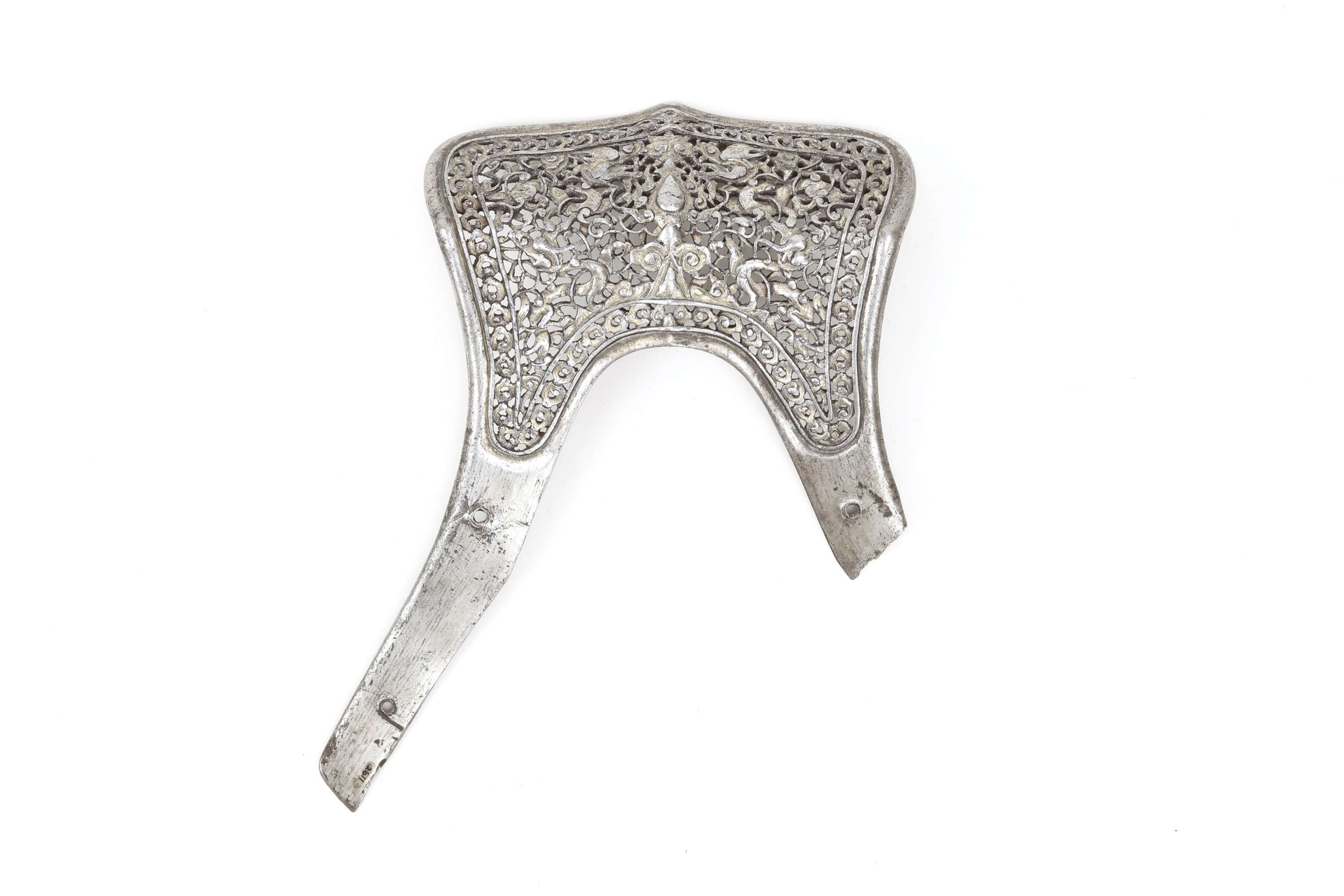 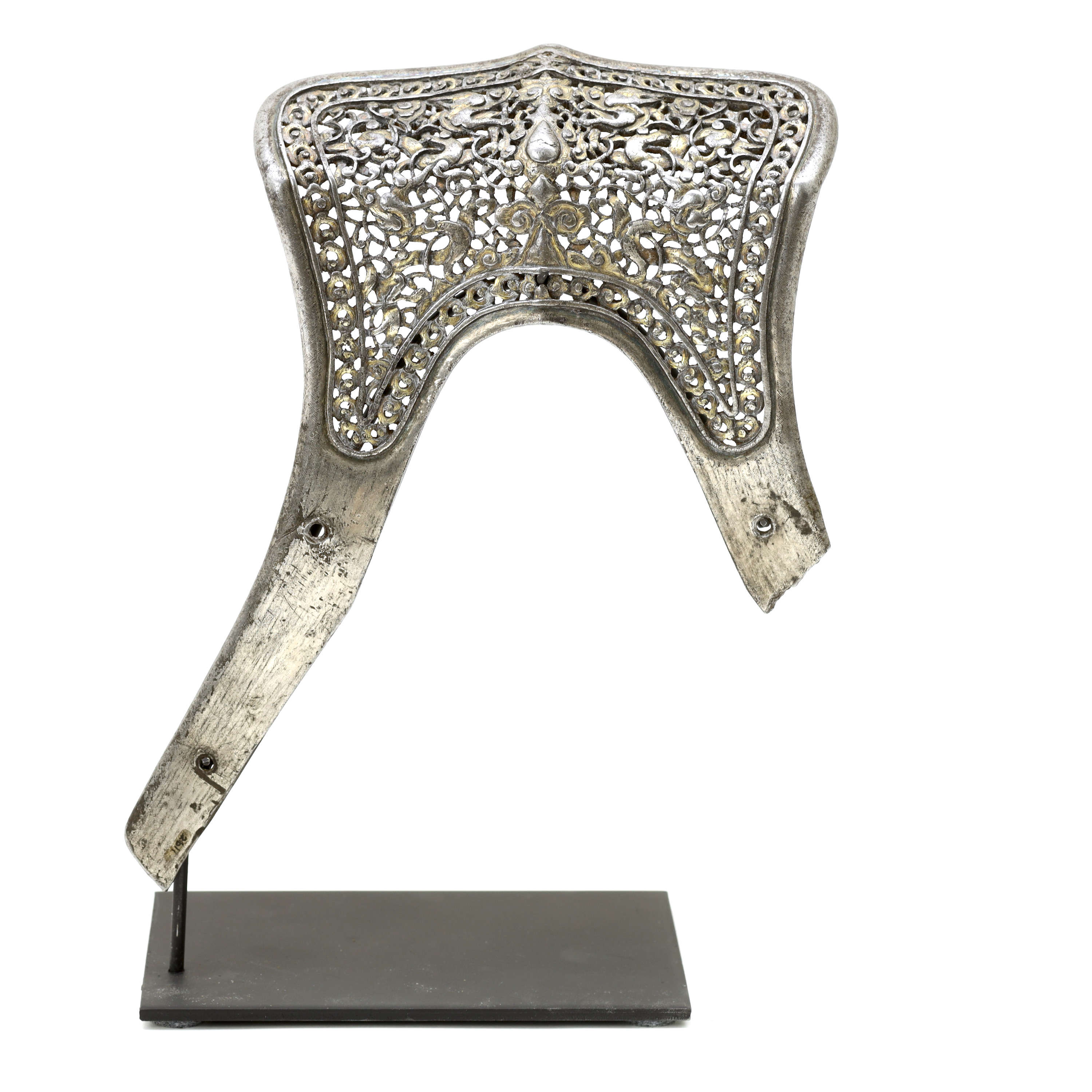 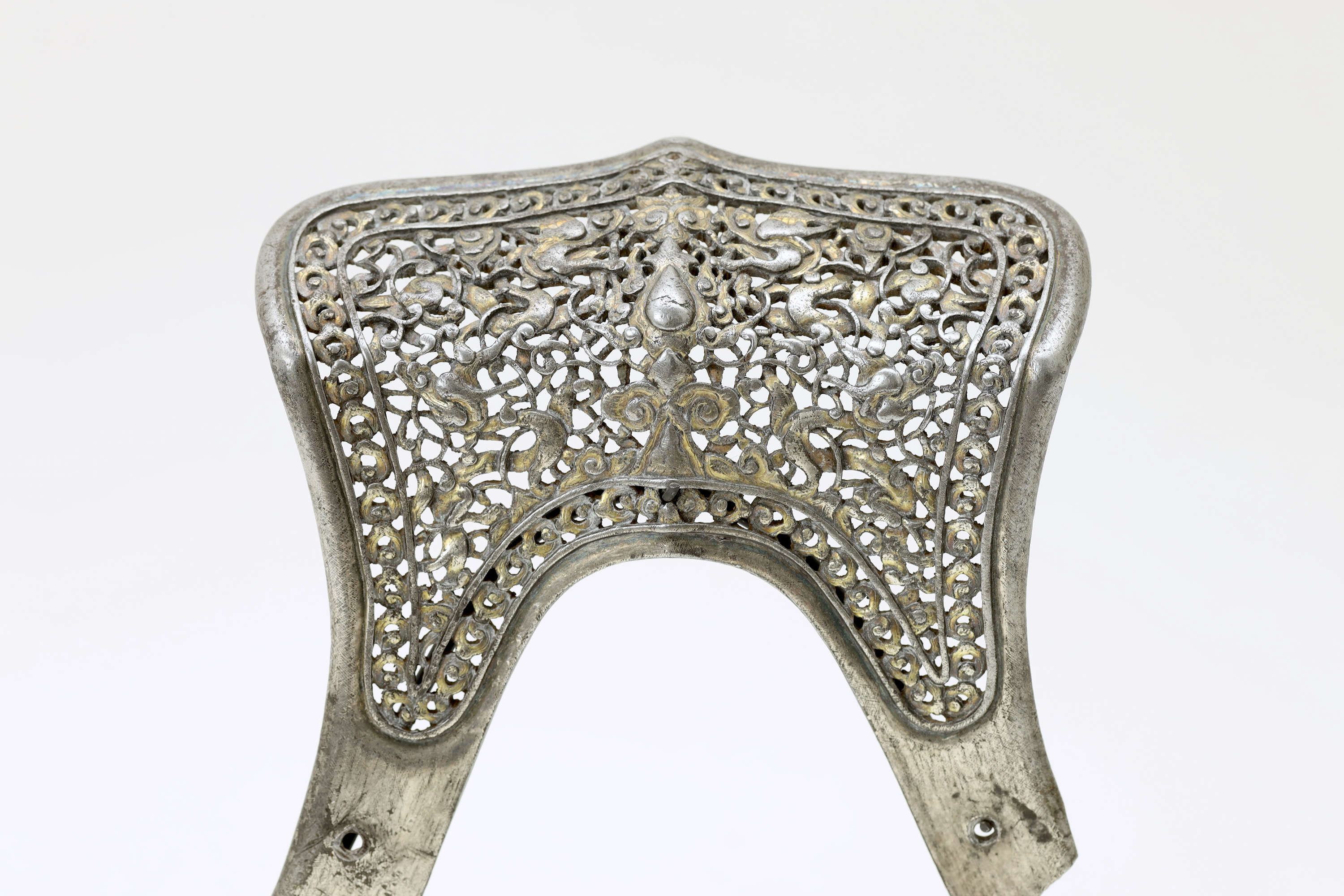 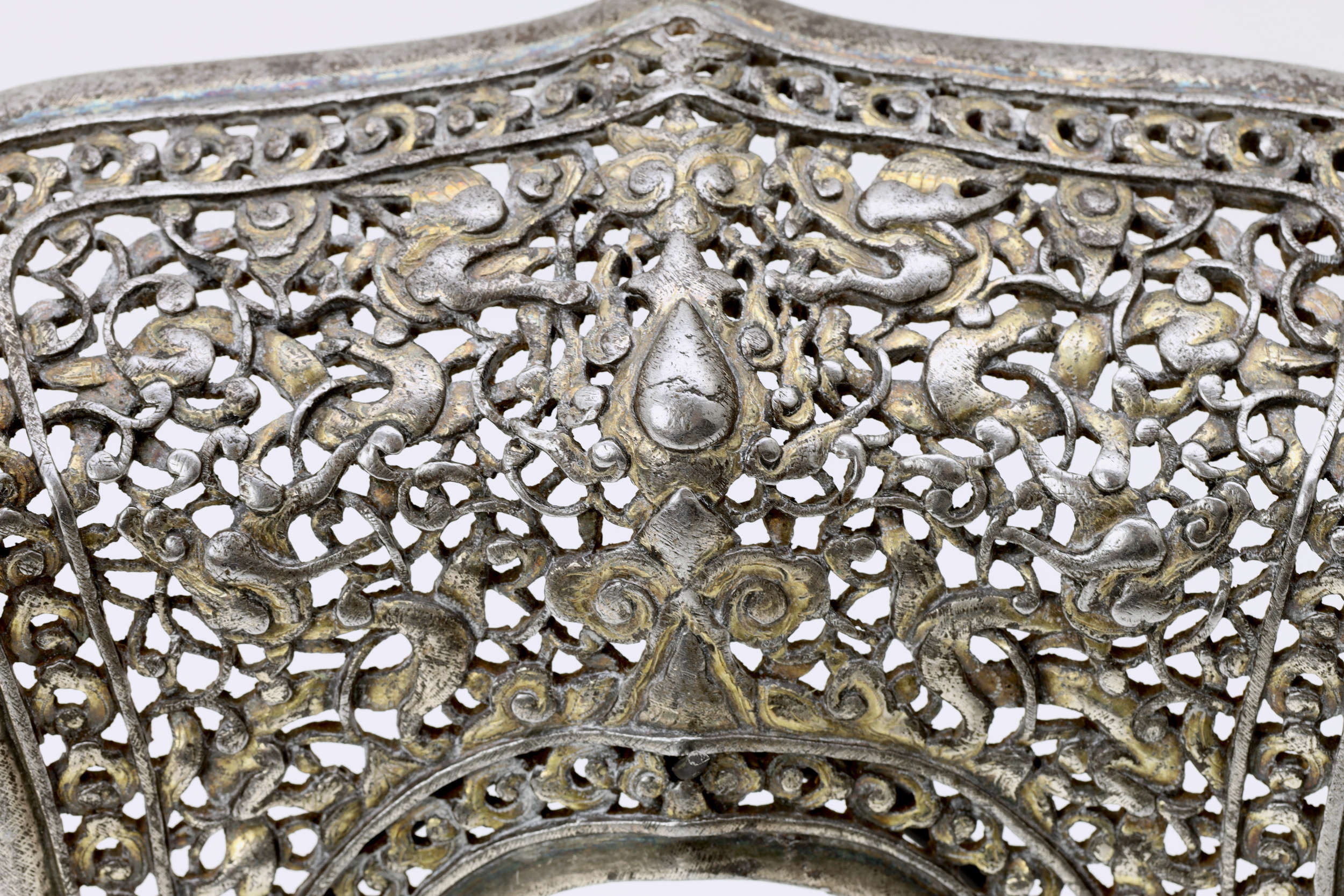 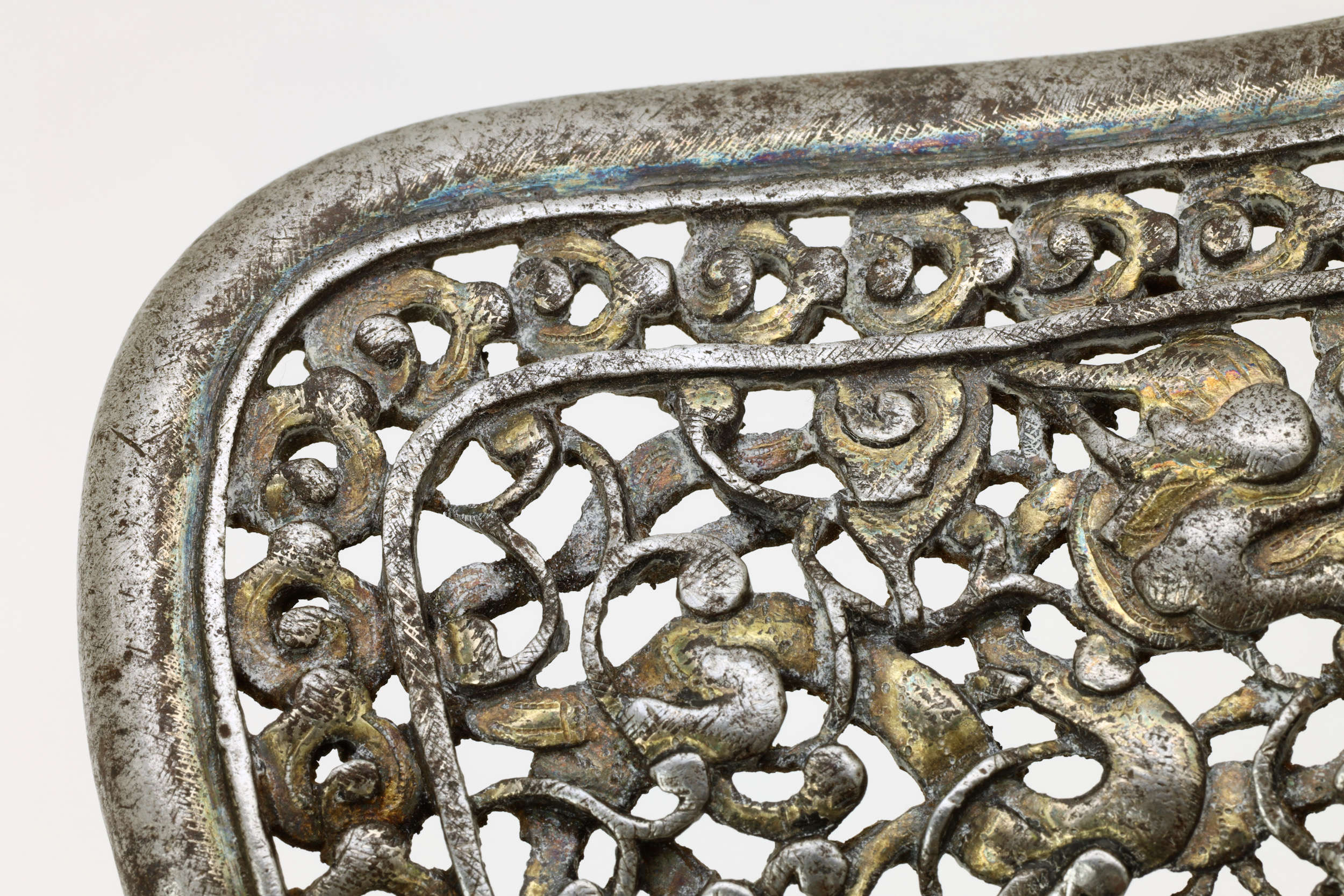 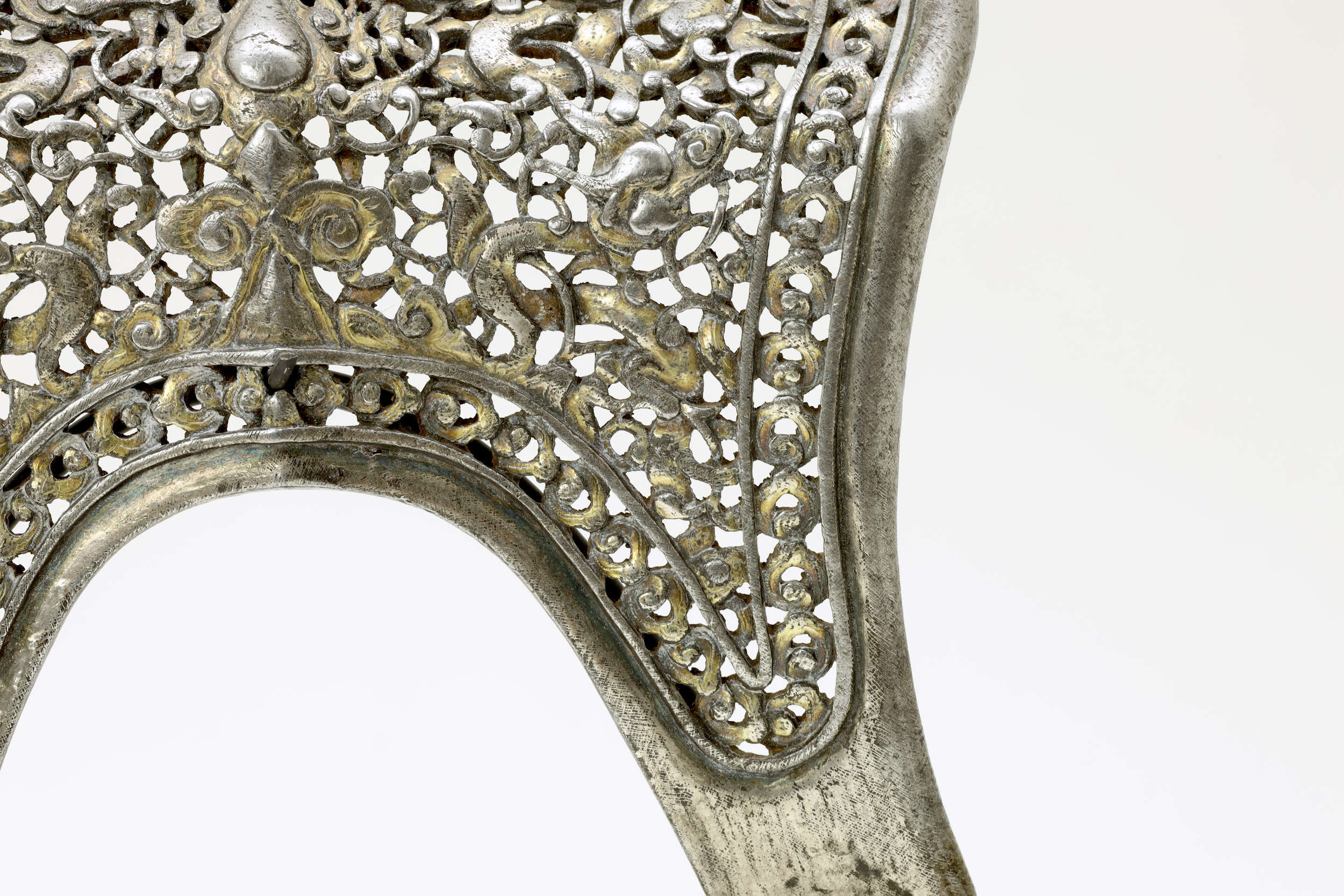 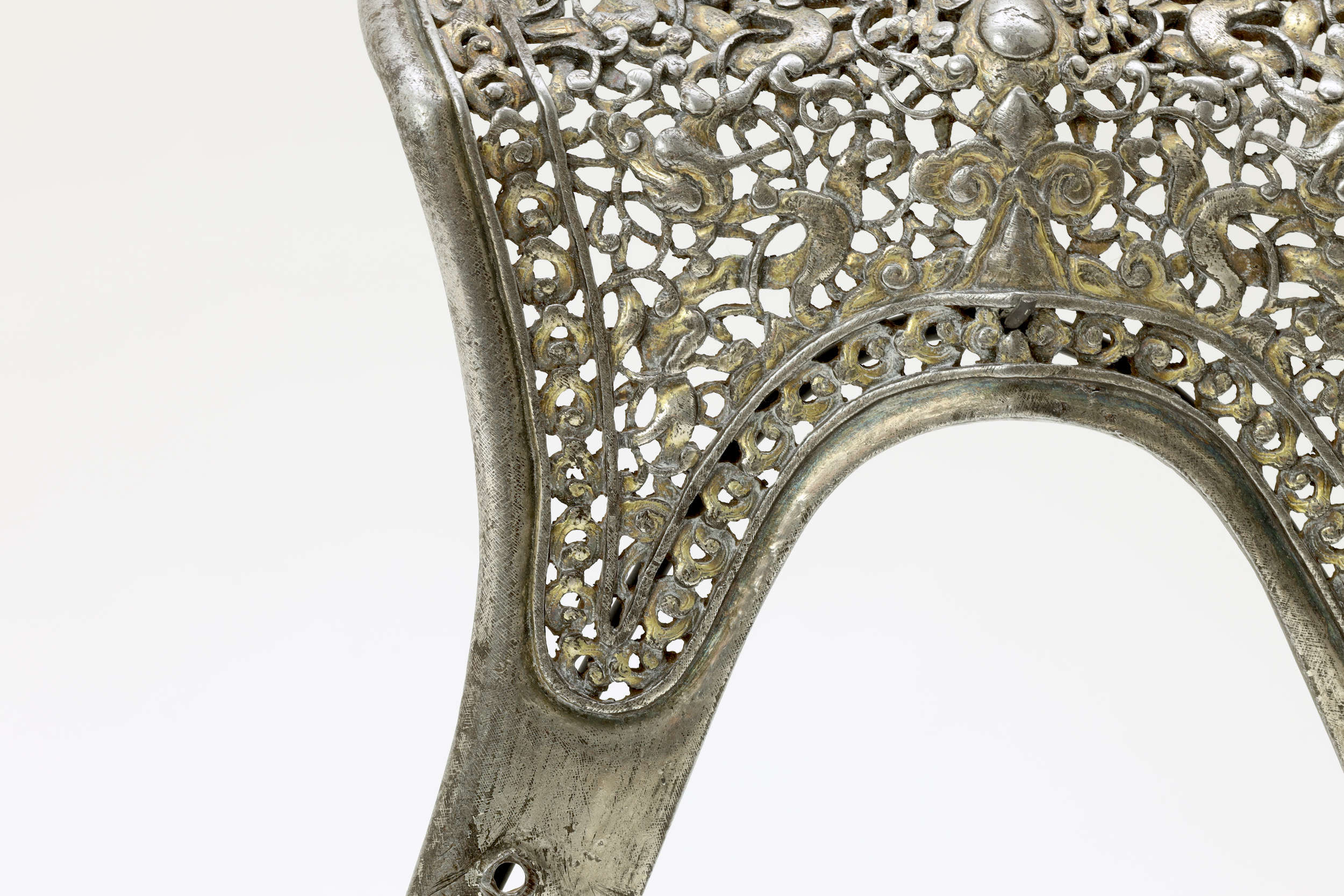 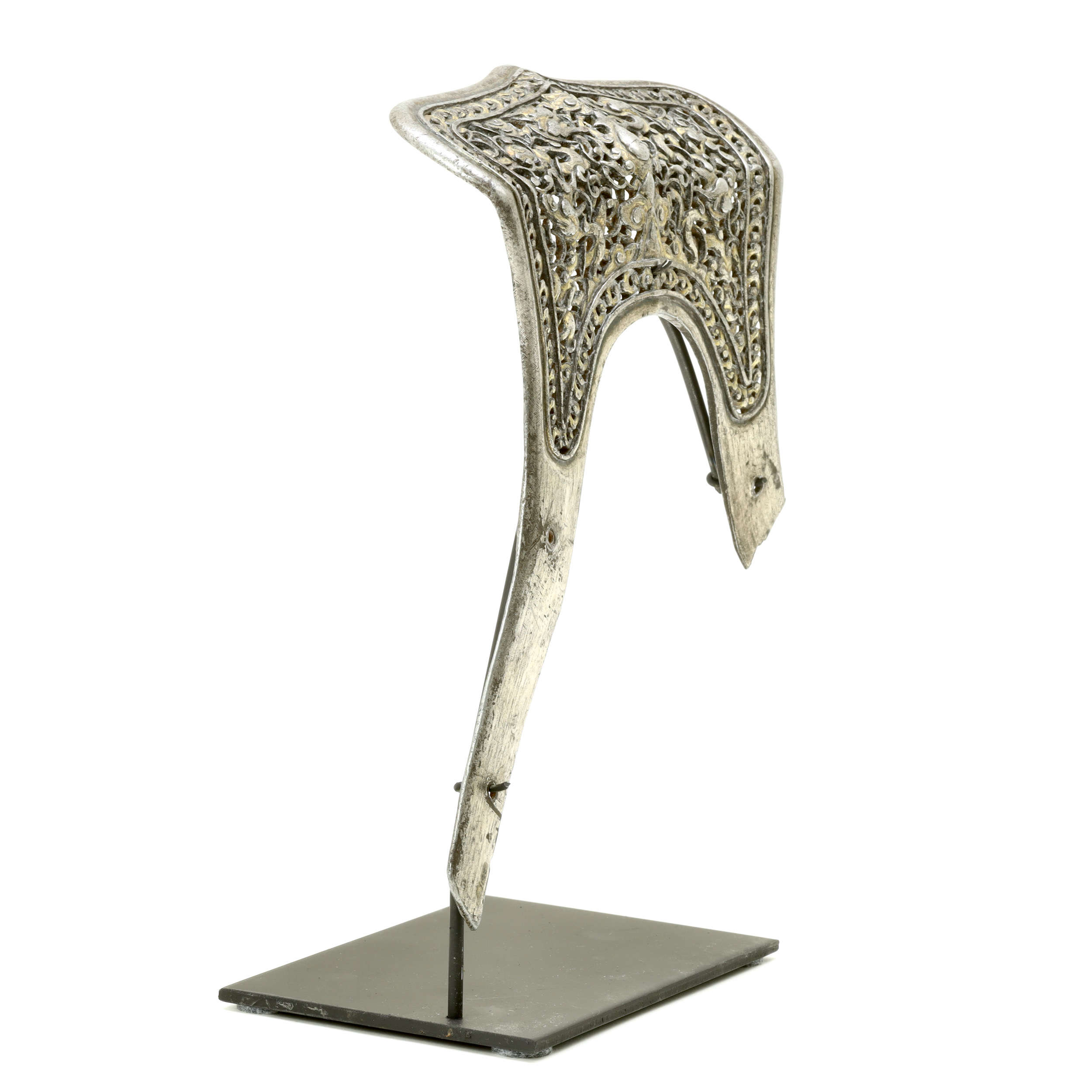