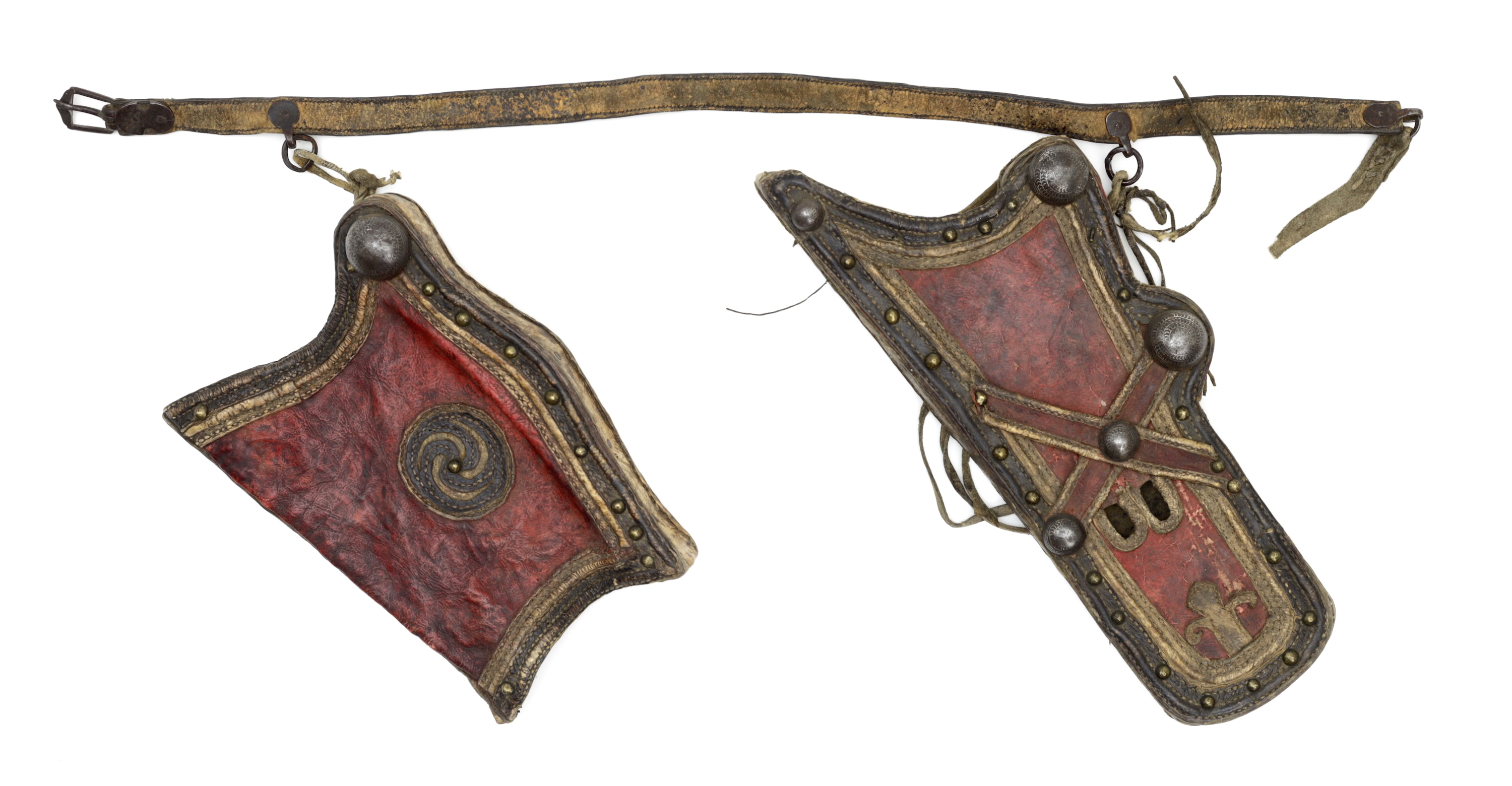 Up until the advent of modern, fast-loading firearms, armies of archers on horseback dominated large parts of Asia and sometimes far beyond, as was the case with the conquests of Ghengis Khan.

Their success was in the fact that they moved fast, even by modern military standards, and were often largely able to live off the land by hunting and herding animals. They used their speed to their advantage, surrounding an enemy force and harassing them with arrows before retreating, regrouping and re-attacking. Shock combat troops like European knights had trouble against such armies because these swift archers simply wouldn’t stand there to receive the shock. Instead, they would disperse, shooting their arrows to weaken the enemy and finally send their own heavy cavalry in with lances. Retaliating was also hard, as nomad armies had no fixed cities to besiege, and a conventional army could only follow them into the steppe for so long until supplies ran out.

The horse archer would carry on his belt two cases. One for his bow on the right side and one for his arrows on the left side. The style of which reflected the culture, status, taste, and wealth of the owner.

Presented in this article is a set of Tibetan bowcase and quiver of the 19th century. They differ from earlier types in having a narrower quiver, and a smaller bowcase that only covers a portion of the bow instead of the larger ones that typically cover more than half of the bow. It comes complete with a belt.

The quiver has a wooden frame covered with leather, red on the outside and brown on the back. It has a main compartment for arrows and two openings on the front for special arrows that would be stuck under the cross-straps into the openings. Decoration on the quiver consists of leather applique work in a stylized lotus bud and five iron bosses, damascened with silver.

Iron bosses on the quiver.

The soft bow "holster" is made entirely of leather. Decoration consists of a single iron boss, damascened in silver, and applique in leather in the form of a gankyil or "wheel of joy".

The gankyil is somewhat similar to the tàijítú (太极图) of Chinese philosophy, only with an additional "comma". It is often described as representing the three sacred jewels: the Buddha, the Dharma, and the Sangha.

In the older Bon religion it denotes the three principal terma ("hidden teachings"); the "Northern Treasure" the "Central Treasure" and the "Southern Treasure". 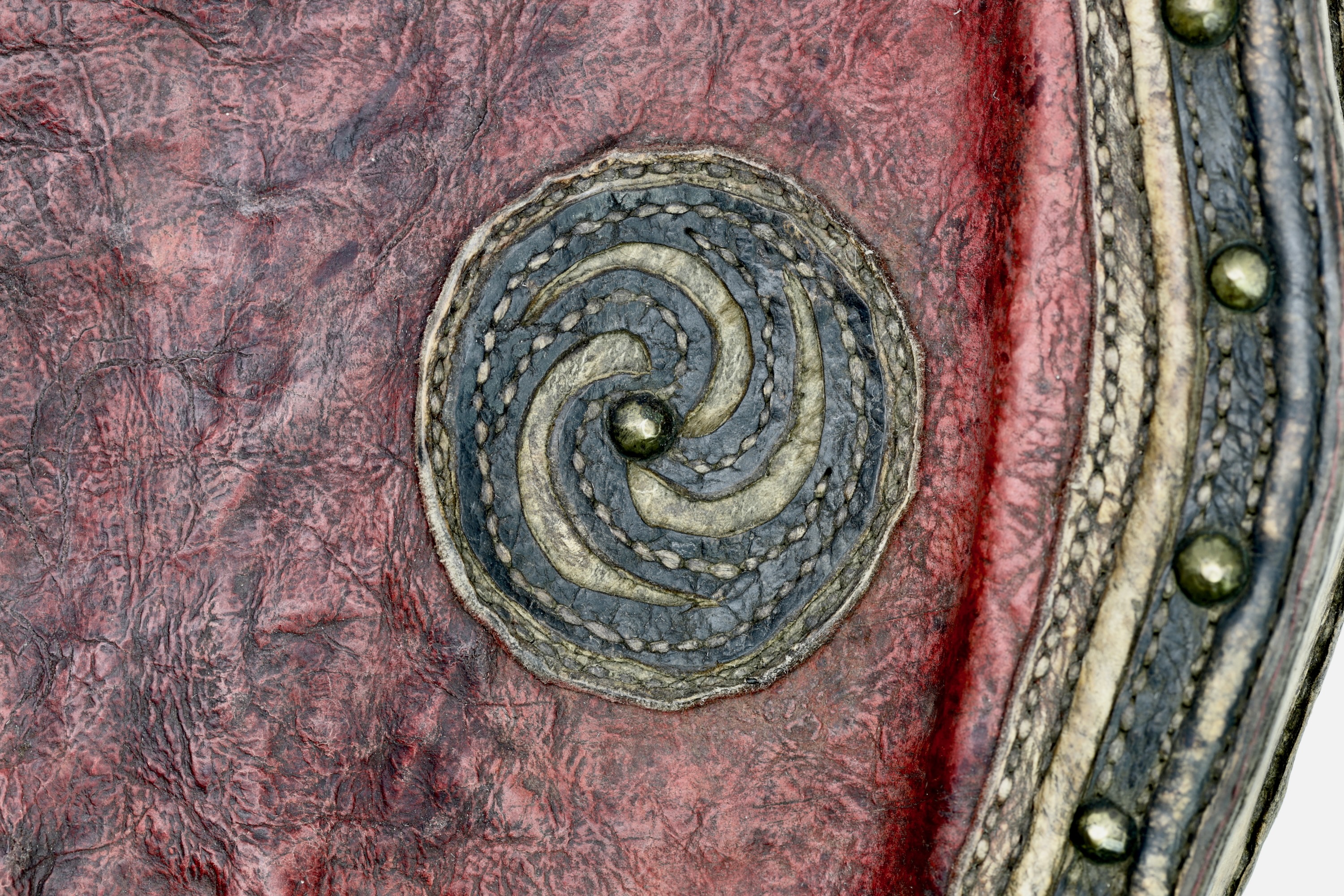 From the collection of Stephen Selby, a prominent author on Chinese archery. Exhibited at the Hong Kong Museum of Coastal Defense in 2008. He had initially cataloged it as "Qing military," but it is, of course, Tibetan.

The following photos shows a somewhat similar Tibetan quiver with cross straps and bosses. The next shows a short bowcase that only partially covers the bow, that also seems to be decorated with a circular ornament. 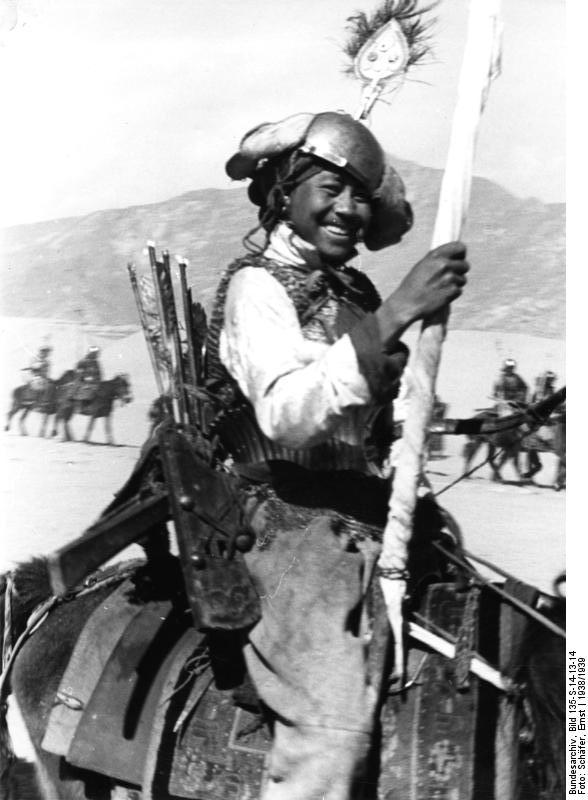 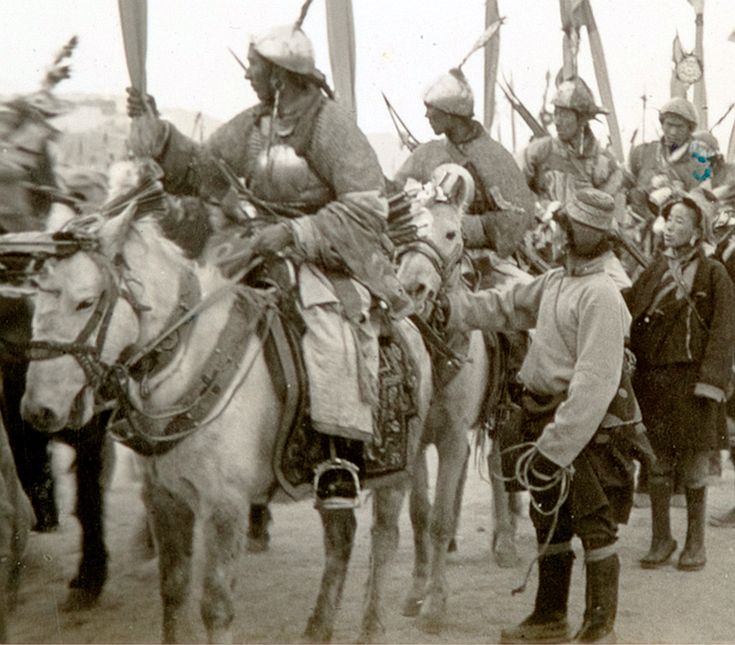 "Zimchongpa warrriors mounted on horses and wearing ancient armour including chainmail, helmets decorated with ornate plumes at the Trapshi Tsisher review which took place on the twenty-third day of the first Tibetan month at Trapshi."

Pretty good condition overall. Some damage to the leather of the quiver. Some losses to the silver on the bosses. Otherwise in good shape. 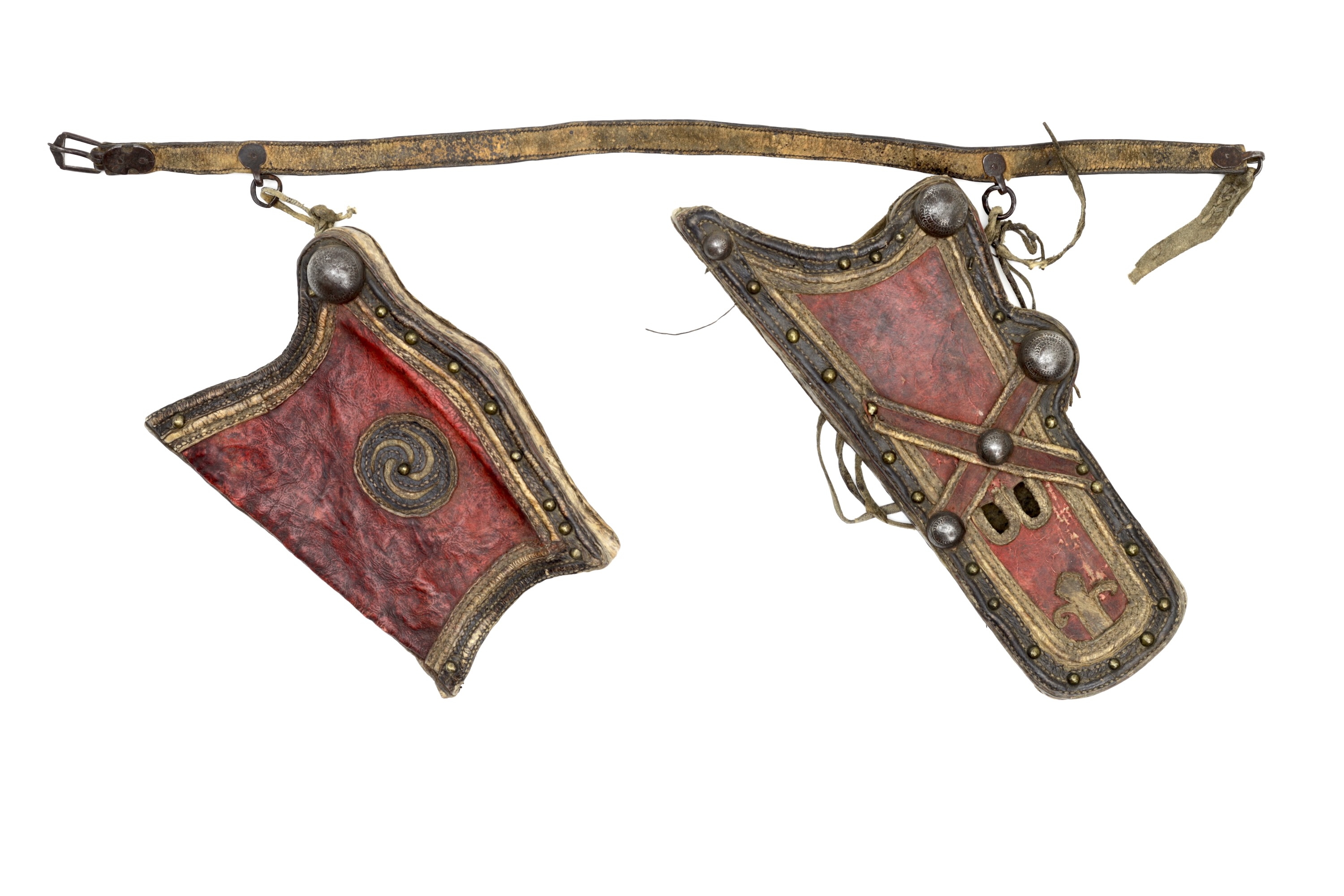 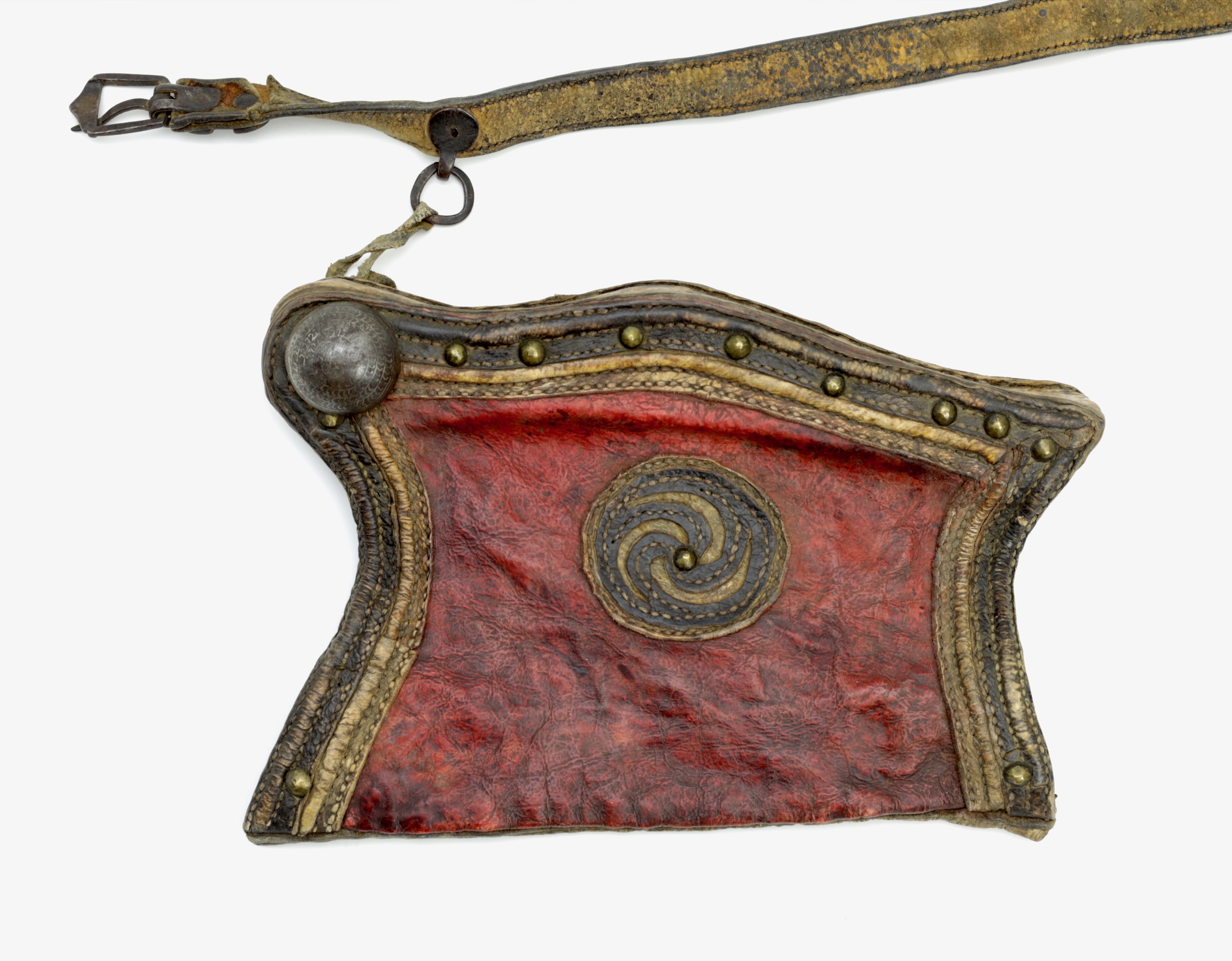 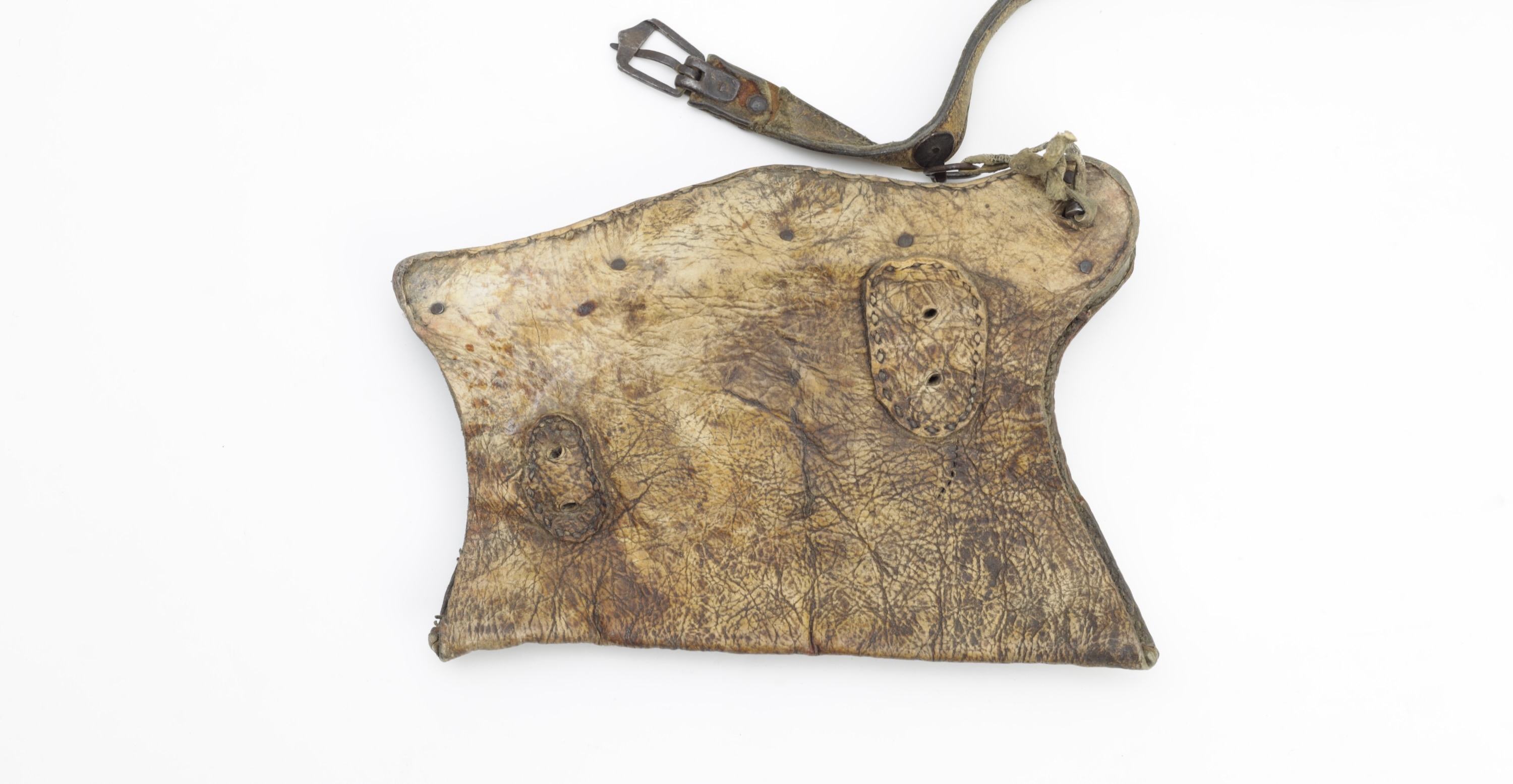 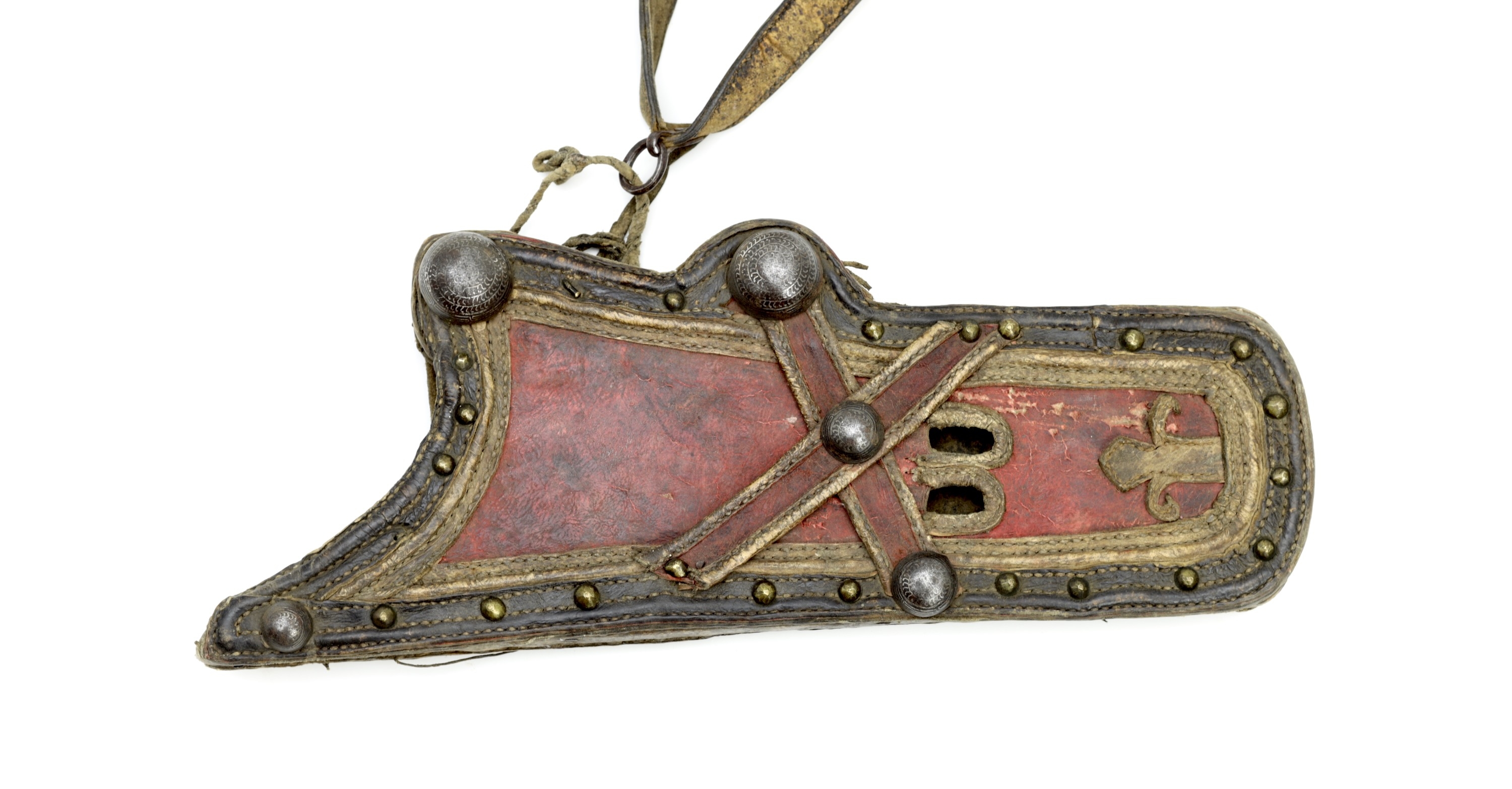 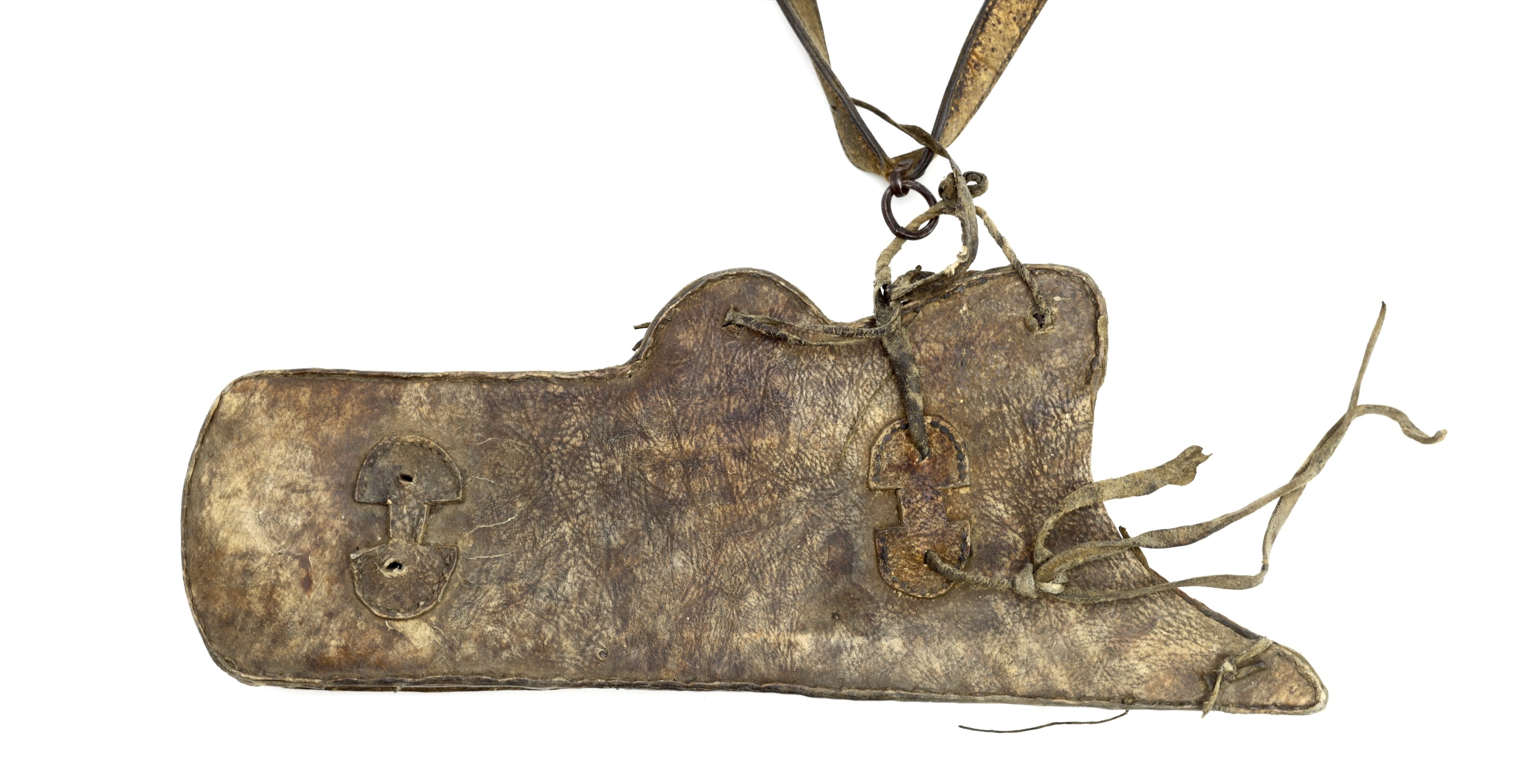 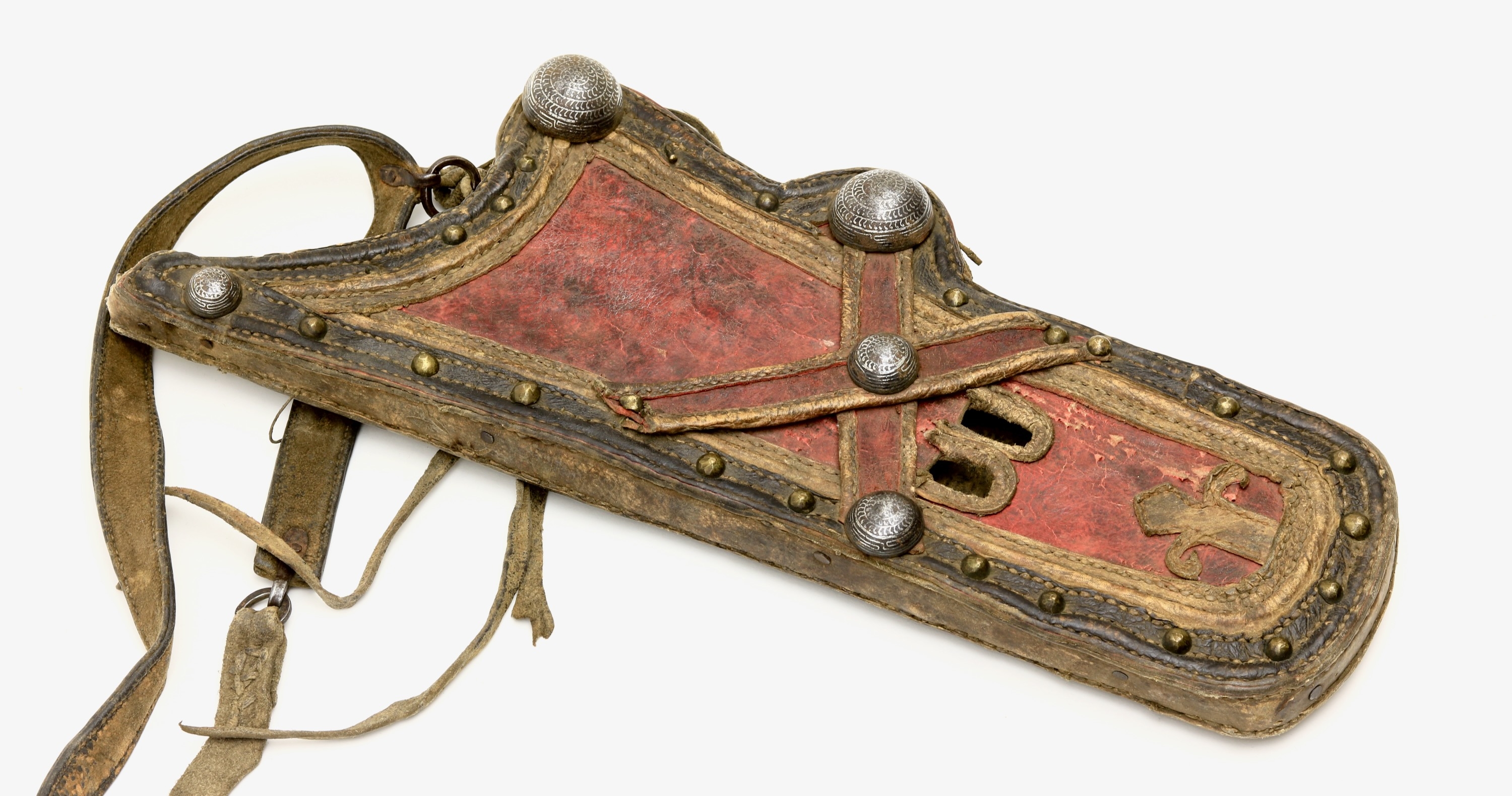 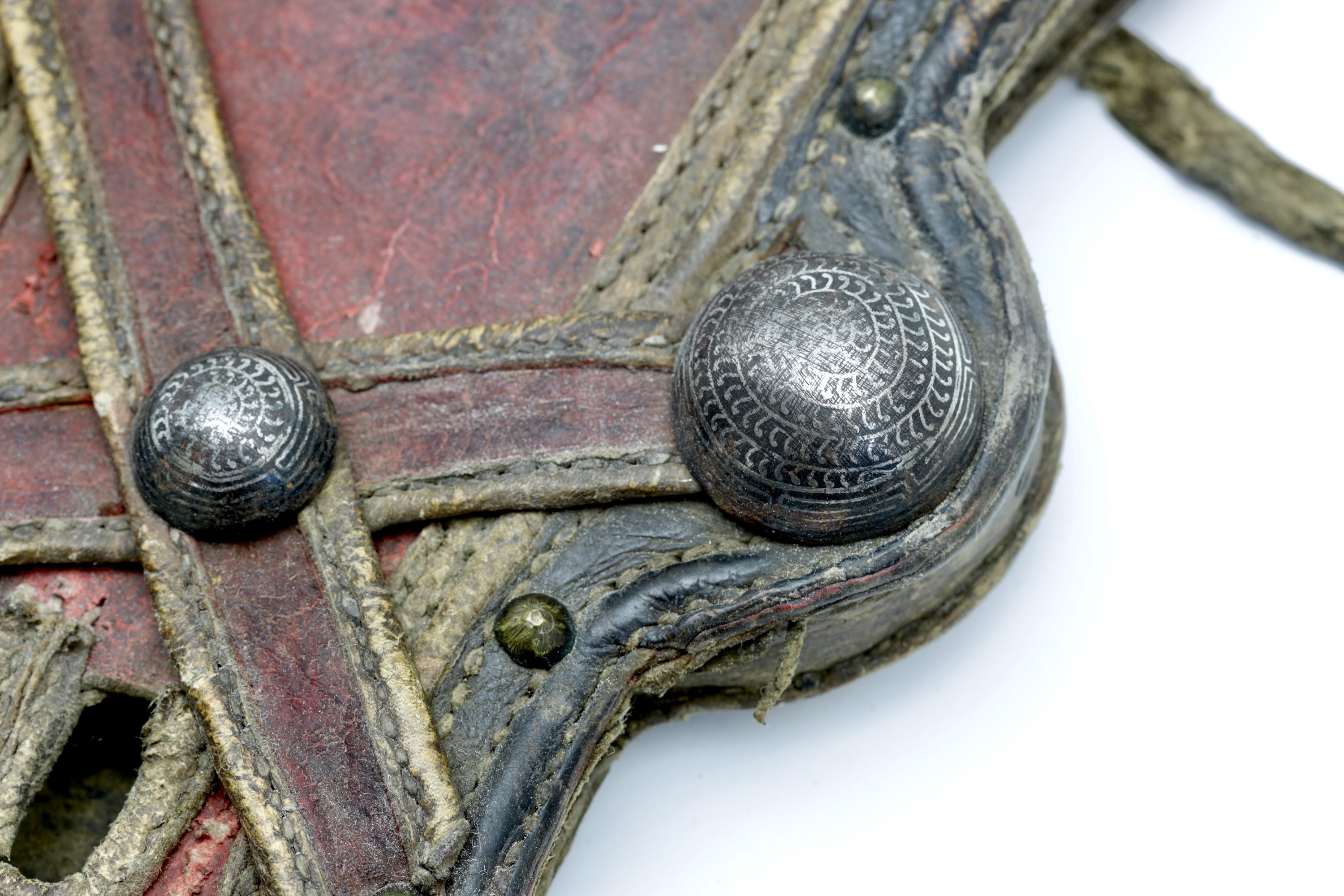 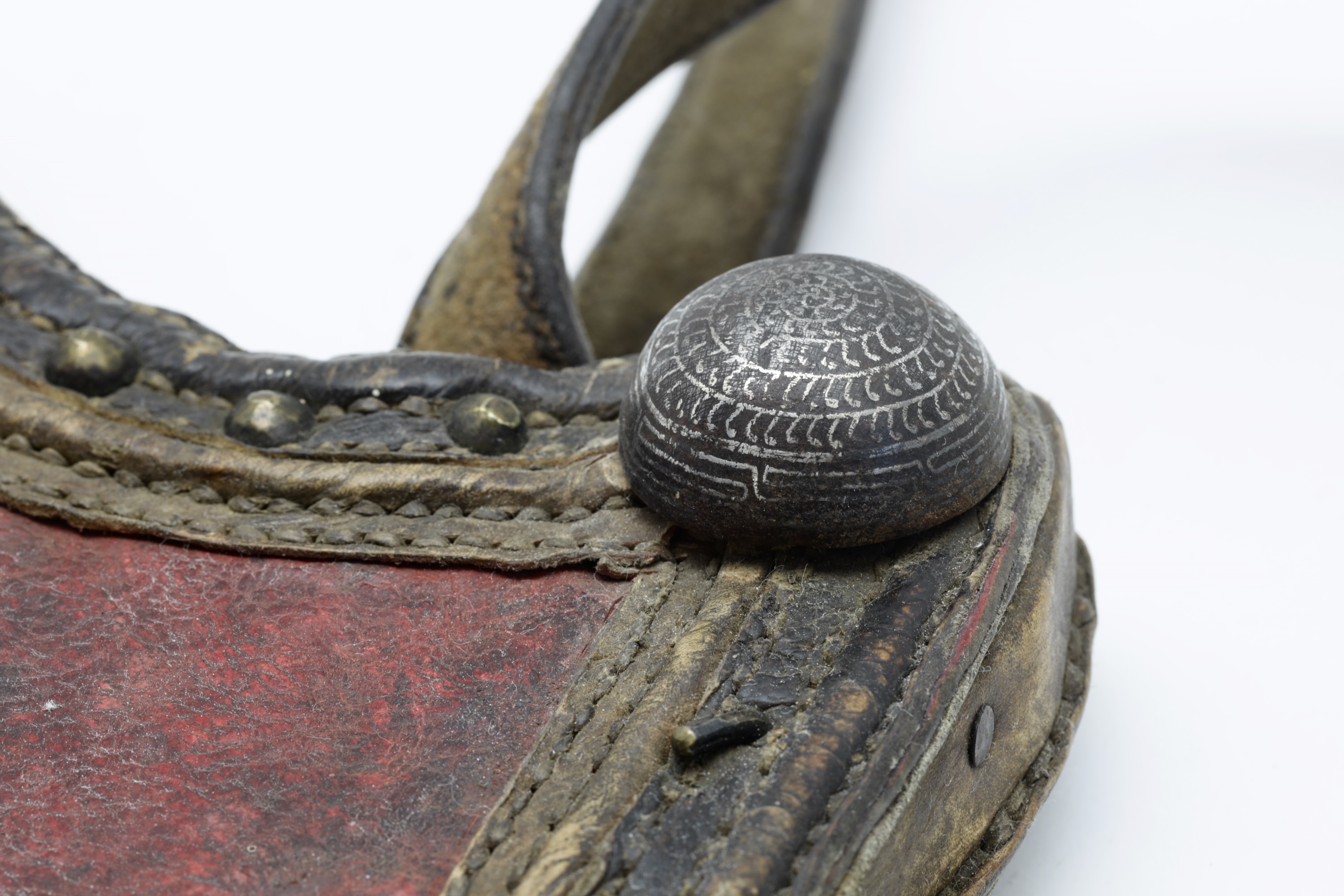 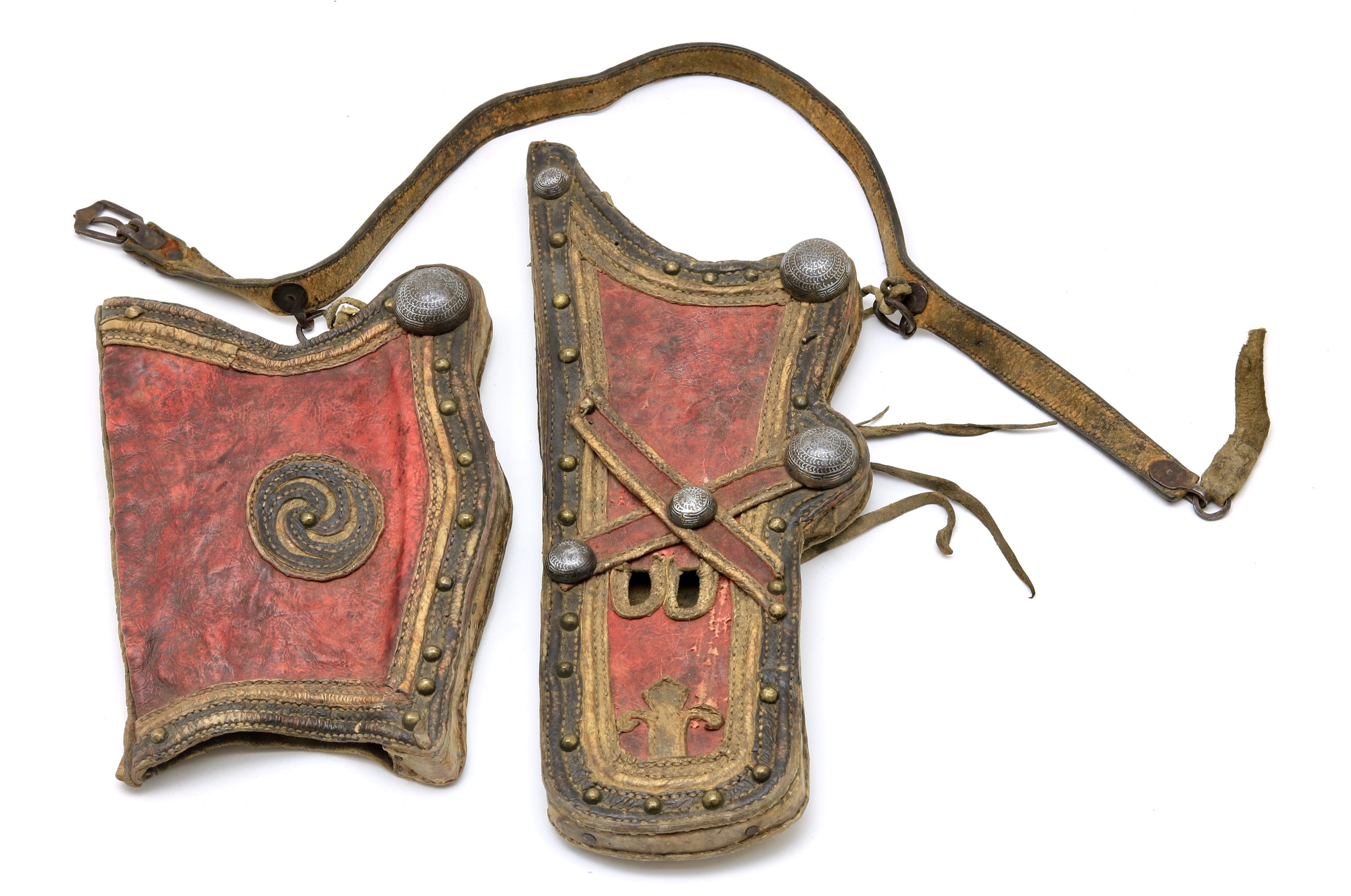 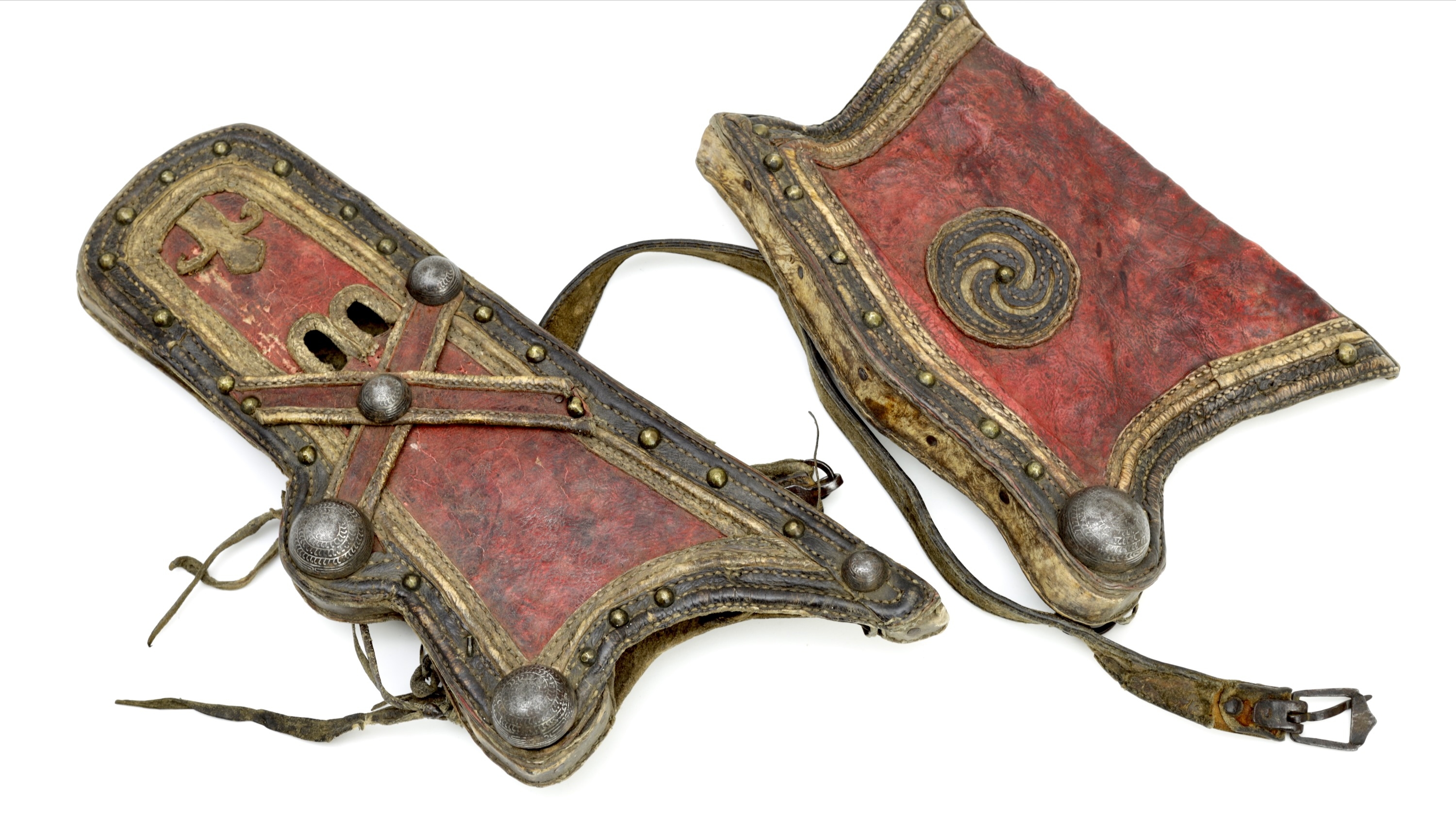 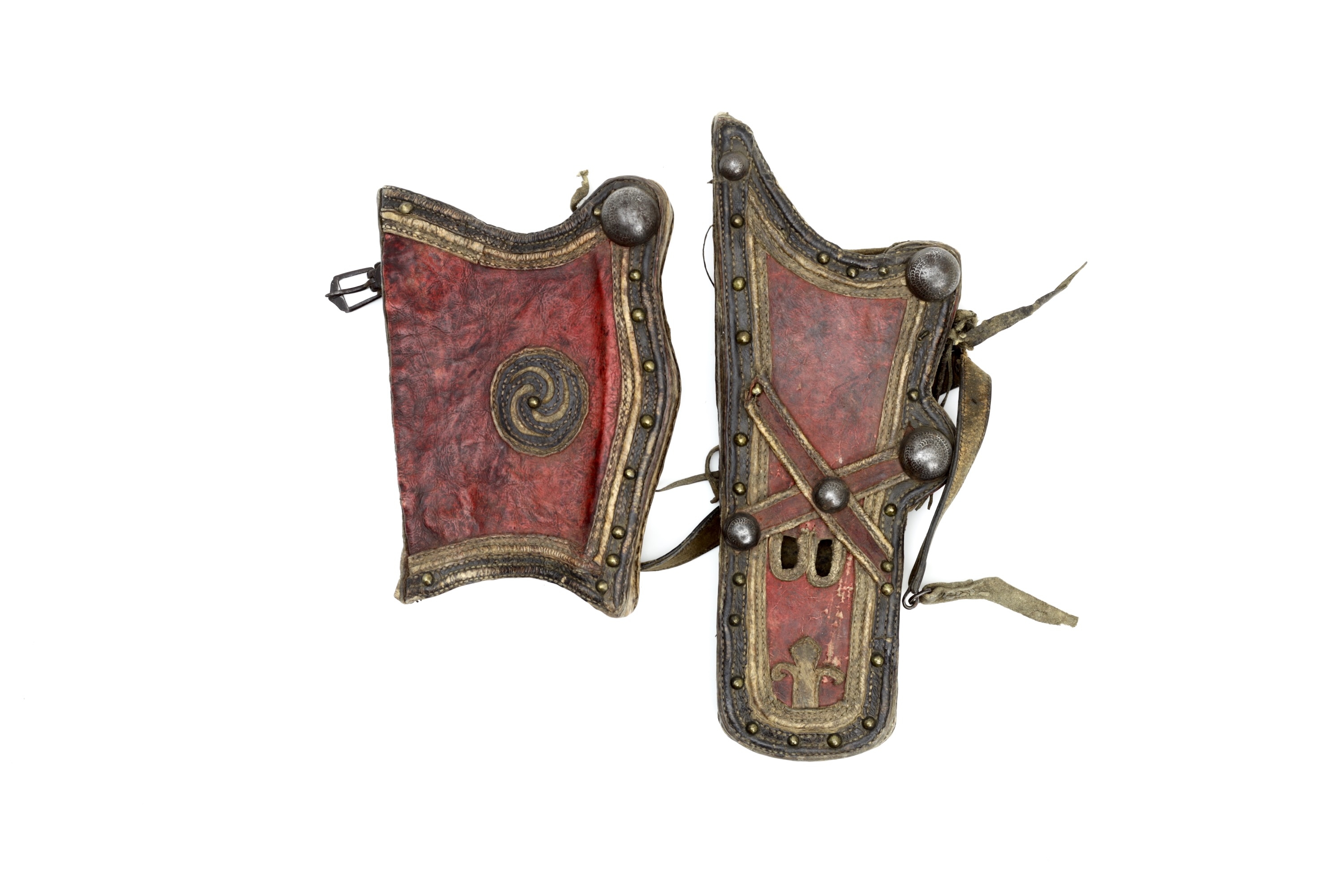