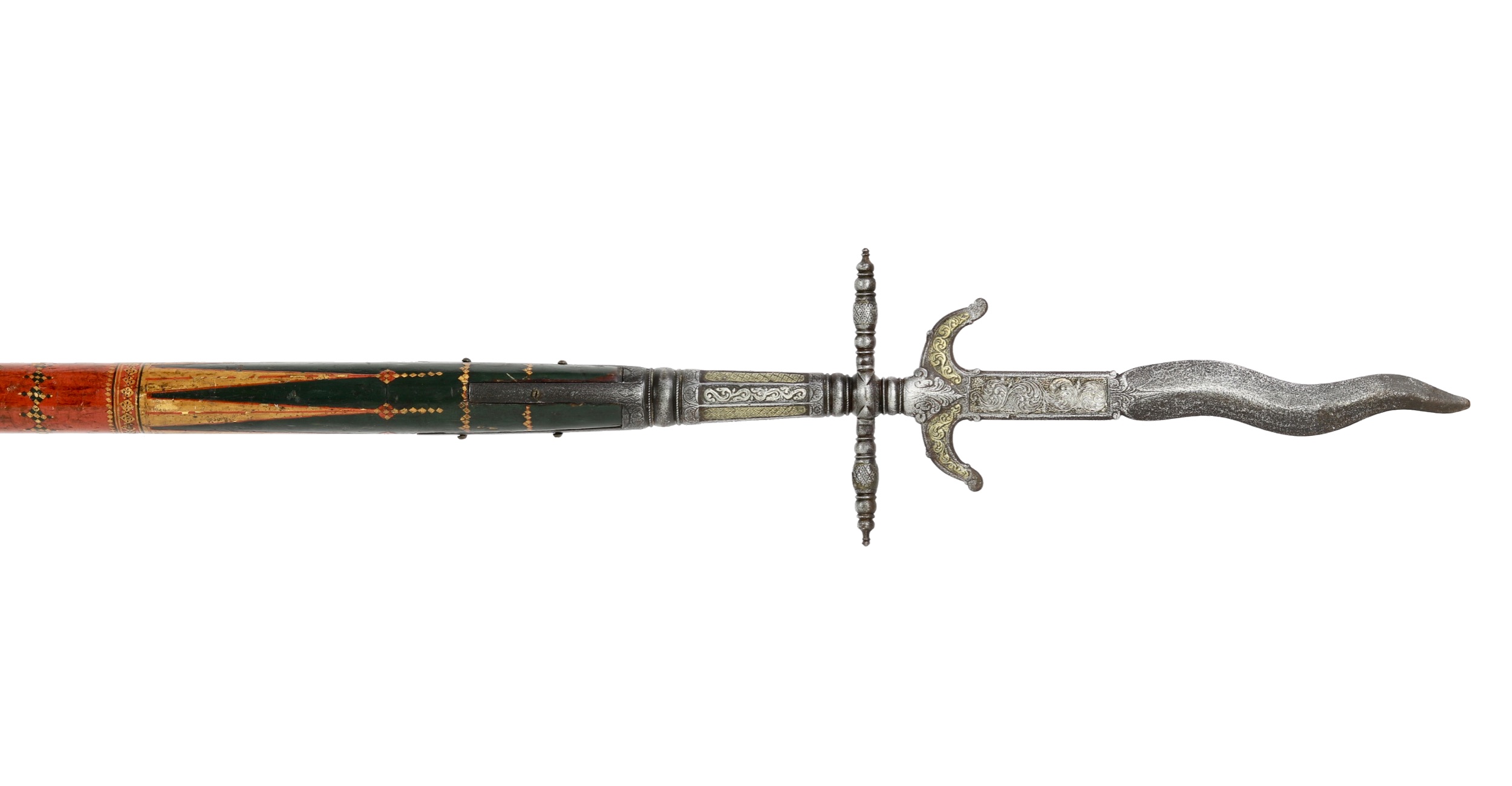 Blade thickness at base 4.5 cm

blade width near base 23 mm

Patisthānaya is the Sinhalese word for a type of polearm that resembles the partisan of Europe.1 Weapons of its general form were in use on the island of Sri Lanka well before the first colonists appear.

These typically only have two wings without the crossbar and are called thatu hella or "winged spear".2 Those with the added crossbar are typically called patisthānaya, the word seems to have derived off the Portuguese word partidária.

In the Kingdom of Kandy, ornate patisthānaya were presented by the king to high ranked officials and were carried by their retainers as an emblem of rank. 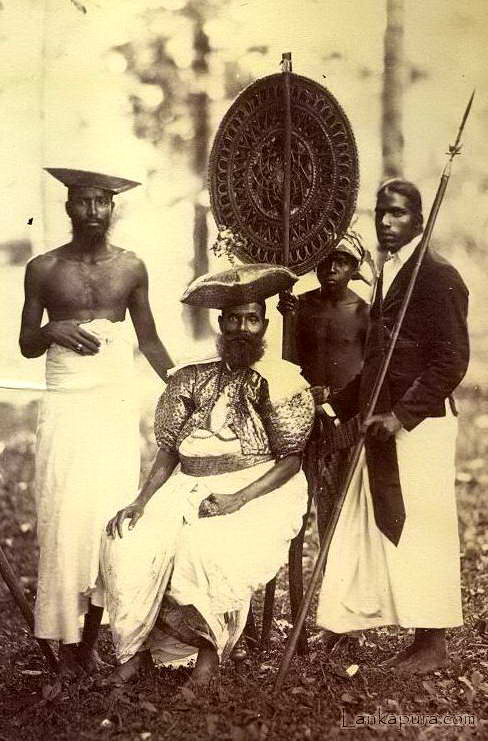 A fine example of a processional patisthānaya, of a type that was made in the king's workshops and presented to high ranked Kandyan chiefs and carried by their retainers.

The spearhead features a wavy blade with ridged cross-section, somewhat reminiscent of the Indonesian keris. The forte of the blade is straight and rectangular in cross-section and both faces are engraved with floral designs that were plated with silver. The work is much like that found on the forte of some of the better kasthāné.

The base of the blade is winged, with further chiseled floral embellishments that are plated with a bright yellow copper alloy. It is much like brass, but doesn't tend to tarnish like brass so it is perhaps some alloy containing silver and / or gold.

Under the blade are three flattened bolsters, the middle of which holds a crossbar. Under that starts the socket, which is octagonal in cross-section. Each faced is chiseled with floral decoration and plated with silver and a yellow metal alloy.

In typical Sinhalese fashion, the fit is further reinforced by four langets, two long and two shorter, that are sunken into the shaft and are secured with small screws.

The long shaft has a thickened butt for balancing and a gradual taper towards the tip. It is covered in its entirety with lacquer work in black, red, yellow and dark green. The lacquer workers were called Ī-vaḍuvō, literally arrow-makers who were involved in both the turning of wooden objects and lacquering them. At any time, two of them would be working in the armory of the King's Four Workshops.

The Sinhalese craftsmen had a peculiar way of applying such lacquer that did not involve a brush but instead was applied in strings with sticks, and cut with the nails. As a consequence, lines with have straight ends and "dots" are angular in shape.3

A beautiful example of a rather rare Sinhalese pole-arm that served as an emblem of rank for Sinhalese chiefs, of which few survived in such good and original condition. 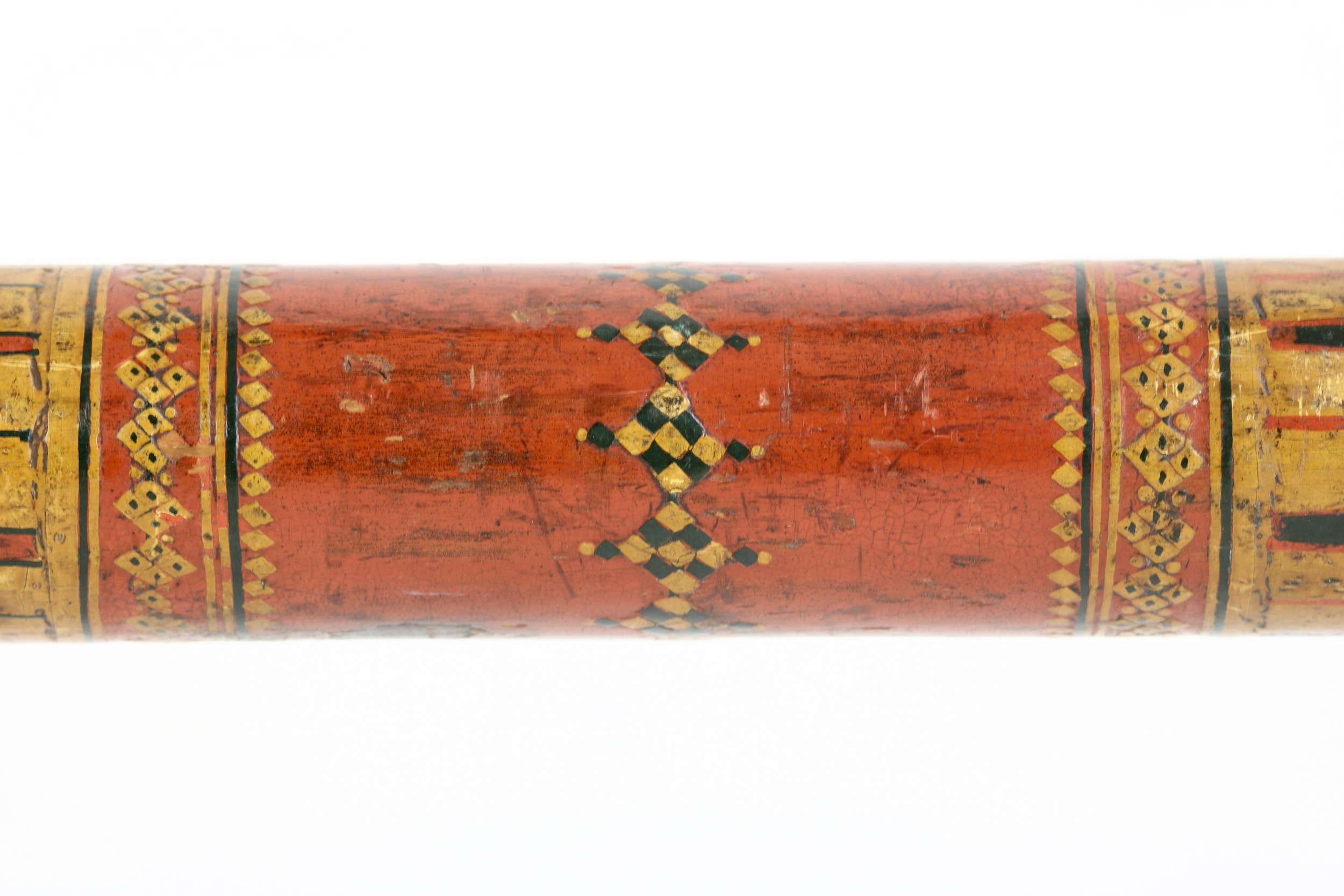