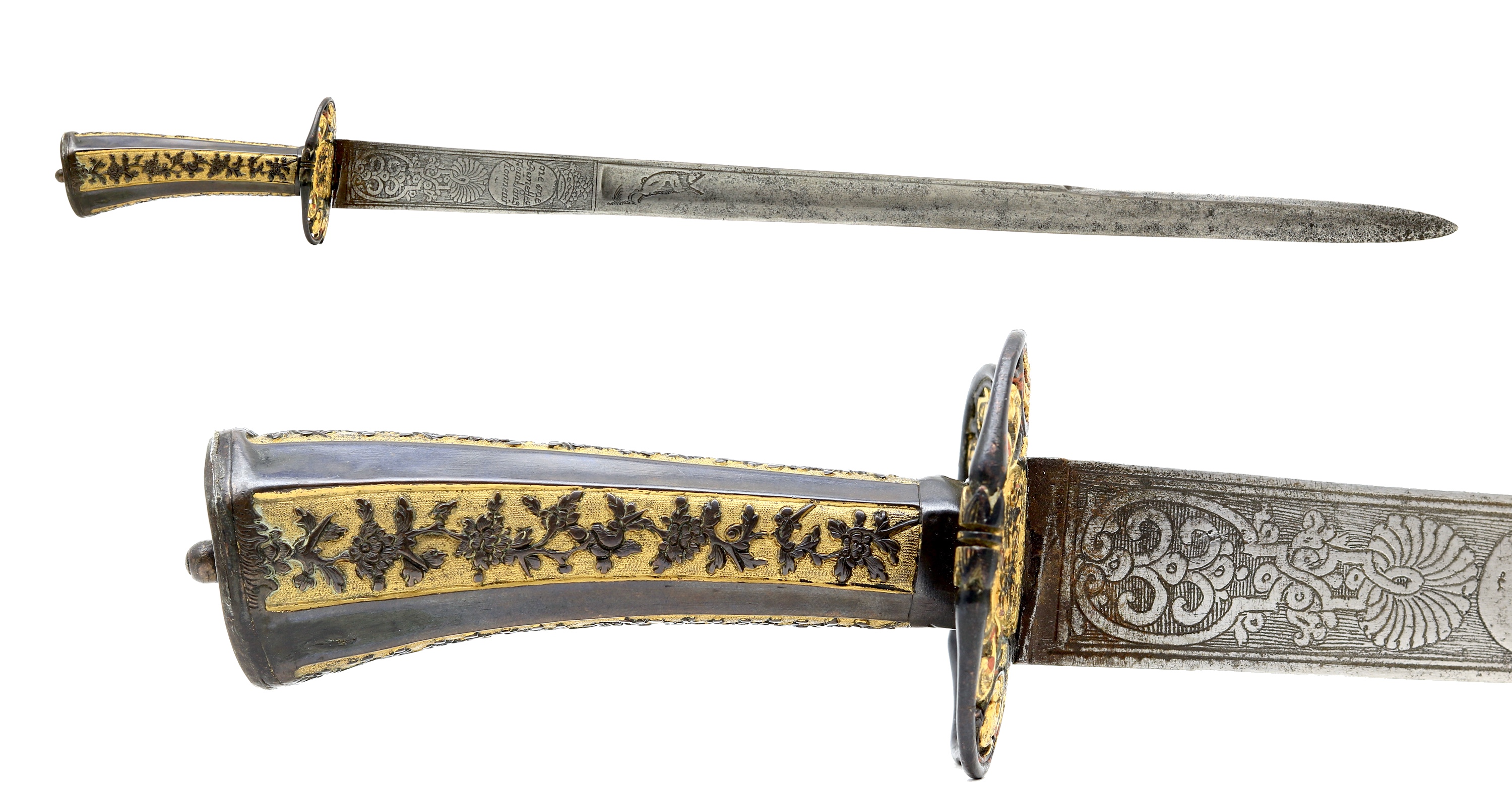 Sawasa is a copper-gold alloy that was patinated a "raven black", with parcel gilt highlights, creating a distinctive black and gold appearance. Sawasa wares were commissioned by the Dutch V.O.C. personnel in the 17th and 18th century and were primarily made for the Dutch expat community that was working across Asia, although there was also some trade with Europe.

The nature of the decoration is usually a mix of Japanese, Chinese, Southeast Asian, and European design elements all merged into one, representing the eclectic tastes of the V.O.C. elites who lived and worked across Asia. It was produced mainly in Nagasaki, Canton (Guangzhou) and Tonkin (Hanoi).

A sawasa hilted hunting hanger. It features a straight blade with a double-edged tip and wide fuller, flanked by a narrow groove near the spine. In the base of the fuller on either side are a running stag and a boar, both prized hunting animals. 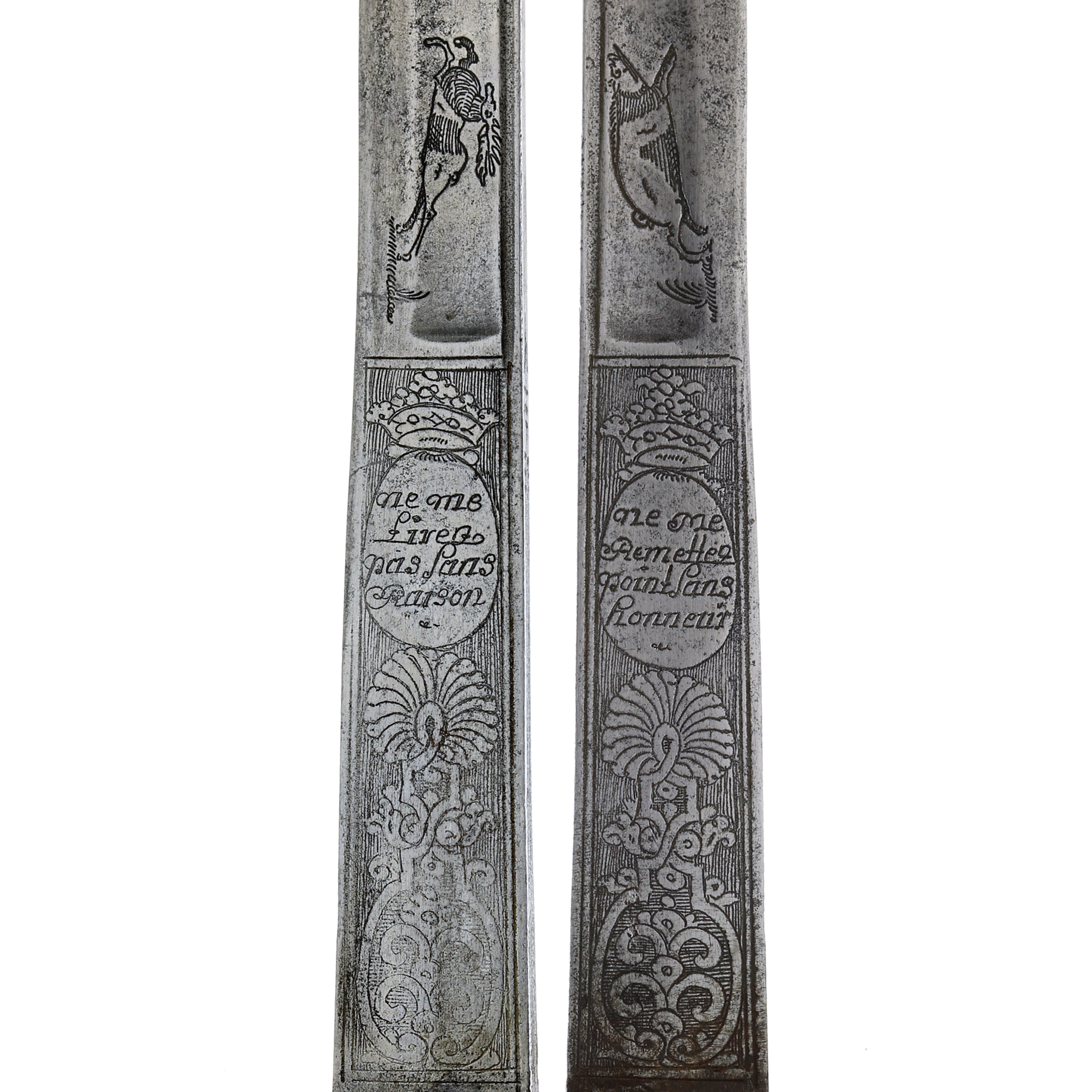 The flats on the base of the blade serve as a canvas for decorative engravings, and within a crowned cartouche the text:

Do not draw me without purpose.

Do not sheathe me without honor.

The blade shows some remarkable similarities to the blades of two hunting hangers in the Visser collection. One of them has the boar, stag, and an arrow on the spine in exactly the same style and workmanship as this sword. It is signed by its maker, Anthonie van de Puttelaar of Amsterdam. There were at least two generations. A list of tradesmen in the Amsterdam municipal archives mentions that Anthonie van de Puttelaar, the second generation, did his master's proof on April 2nd, 1735.1

The hilt consists of a sawasa guard and grip, both made of the copper-gold alloy, patinated a "raven black". The guard is a small asymmetrical smallsword guard of the "double-shell" type, probably initially intended for use on such a sword.

The grip is of more typical construction for this type of weapon, octagonal in cross-section and flaring out in thickness towards the pommel plate. 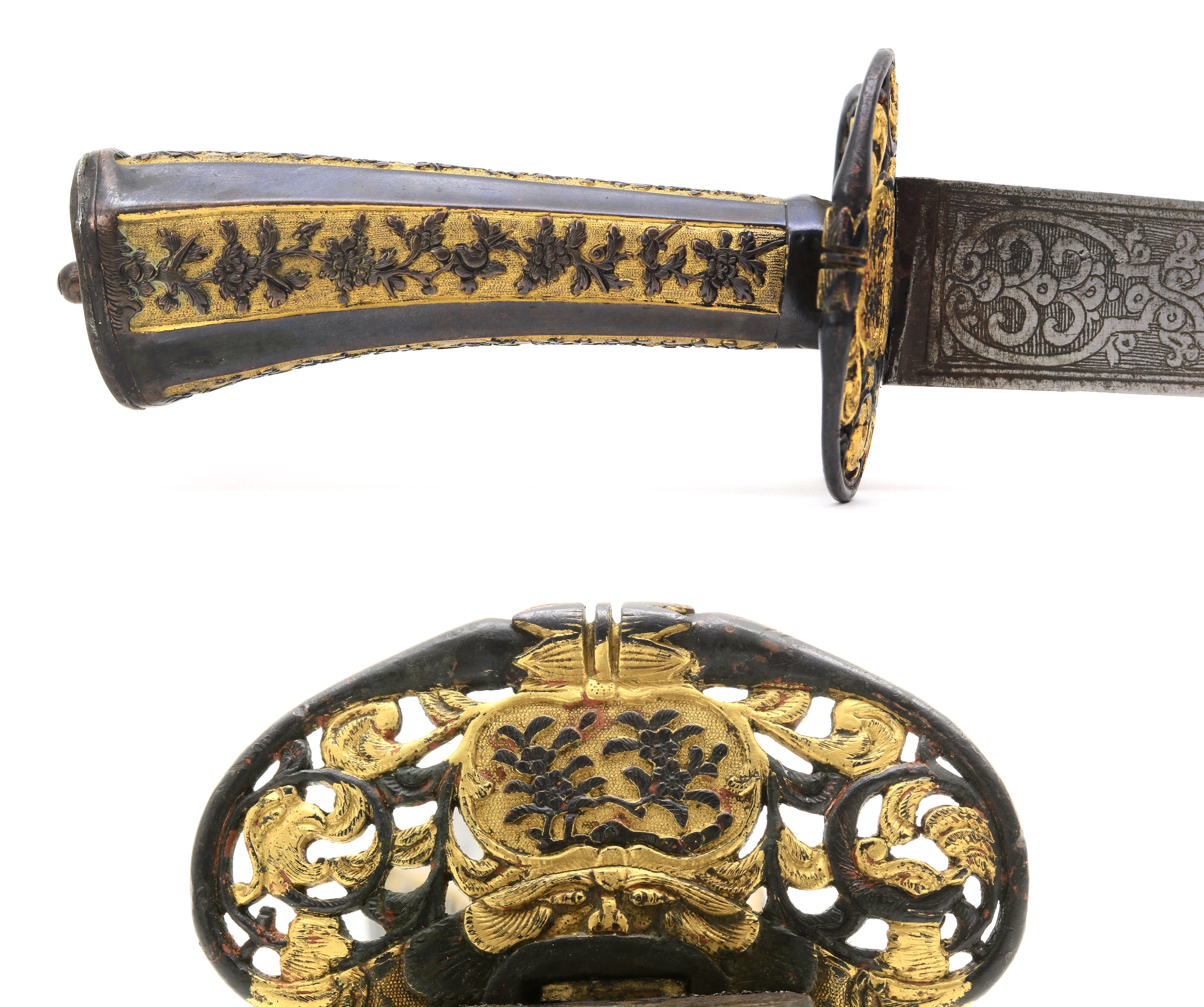 There is a lot to see in the decoration of the fittings. Typical Western European are some design elements on the guard, including the executiuon of the scrolling and the partial faces near the tang opening, and the stylized bird head (left) and stylized fish (right) hidden in the designs. Both guard and hilt also feature cartouches with more Asian floral designs raised from a golden surface with a texture of punched dots, executed in a manner that reminds of Japanese nanako but with more looseness in its execution.

Some wear on the blade and pitting mainly near the tip section. The hilt went through some repair; the plain plate at the back of the pommel is a replacement and the pommel peening was re-done. Some of the usual wear and tear on the sawasa and some reddish oxidation here and there. The main decorative elements are all of the period and without repairs and restorations. 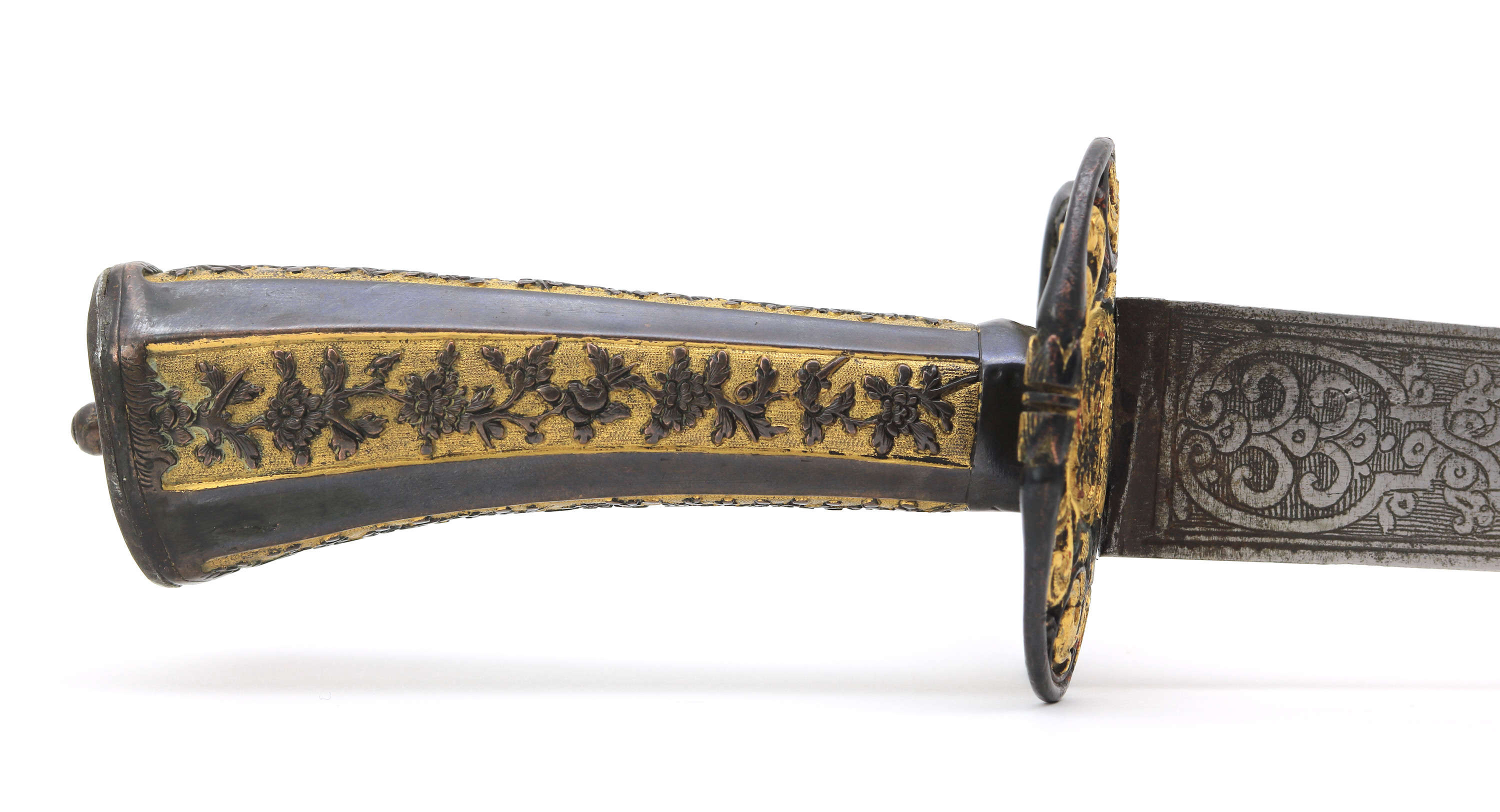 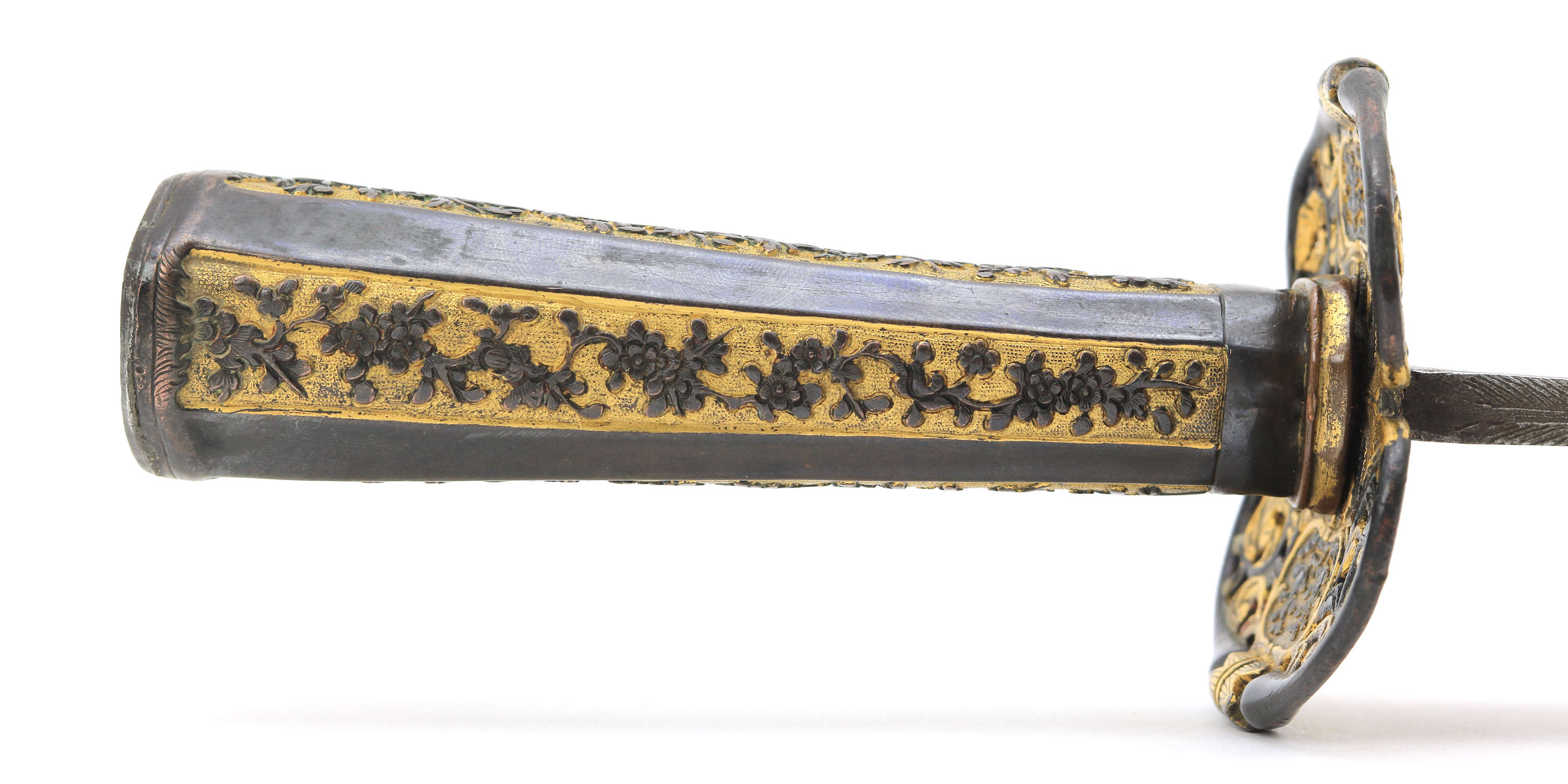 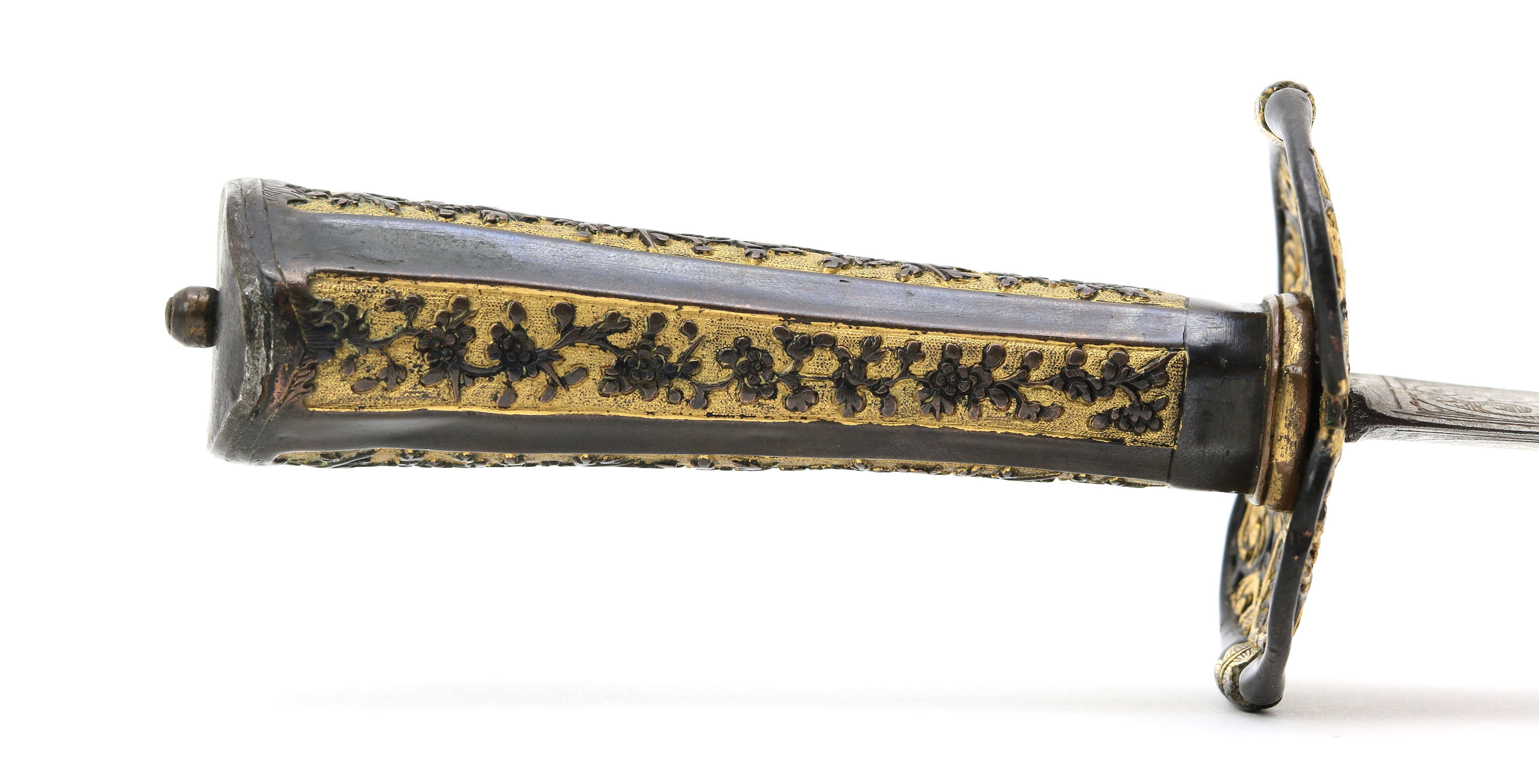 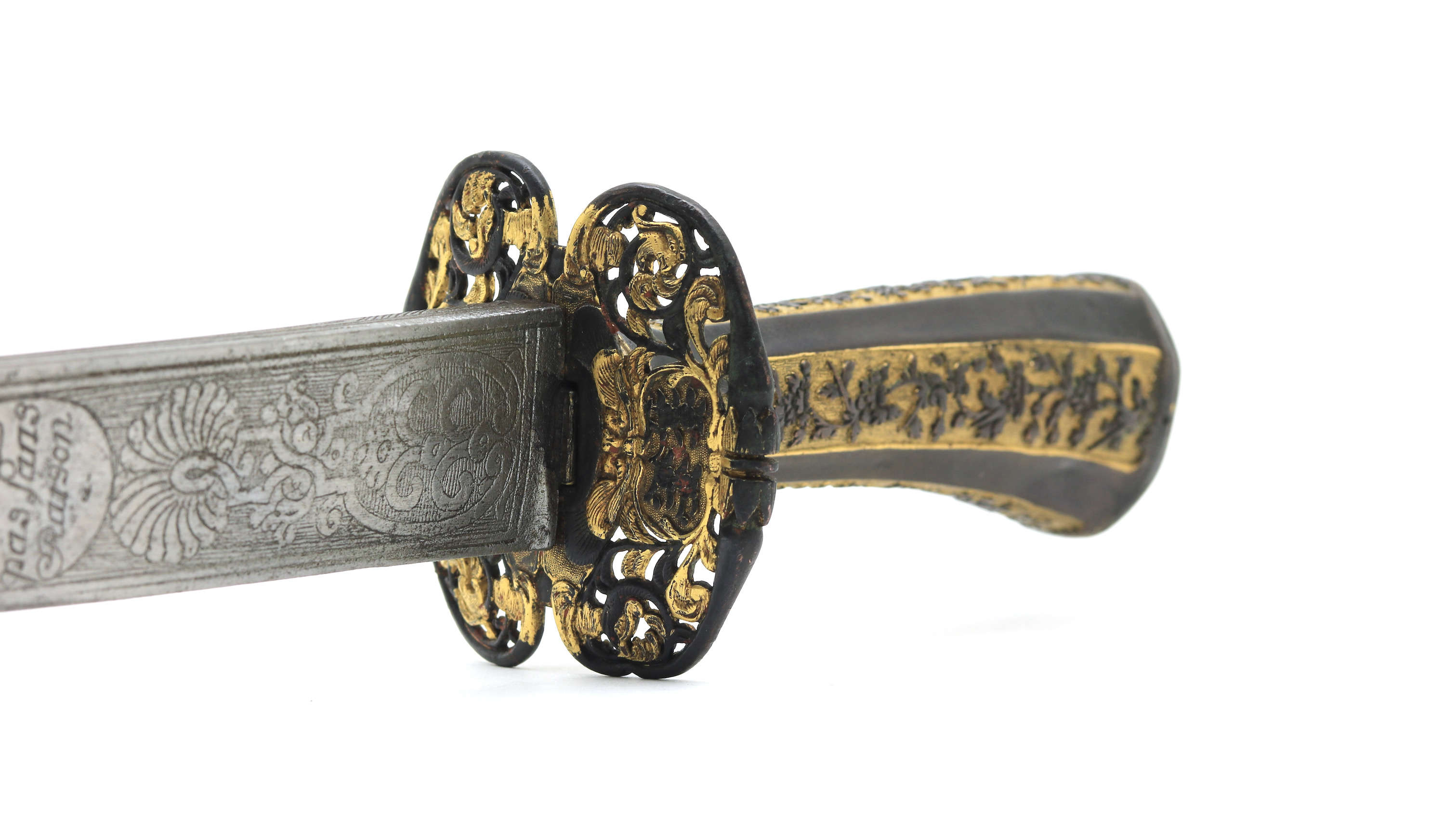 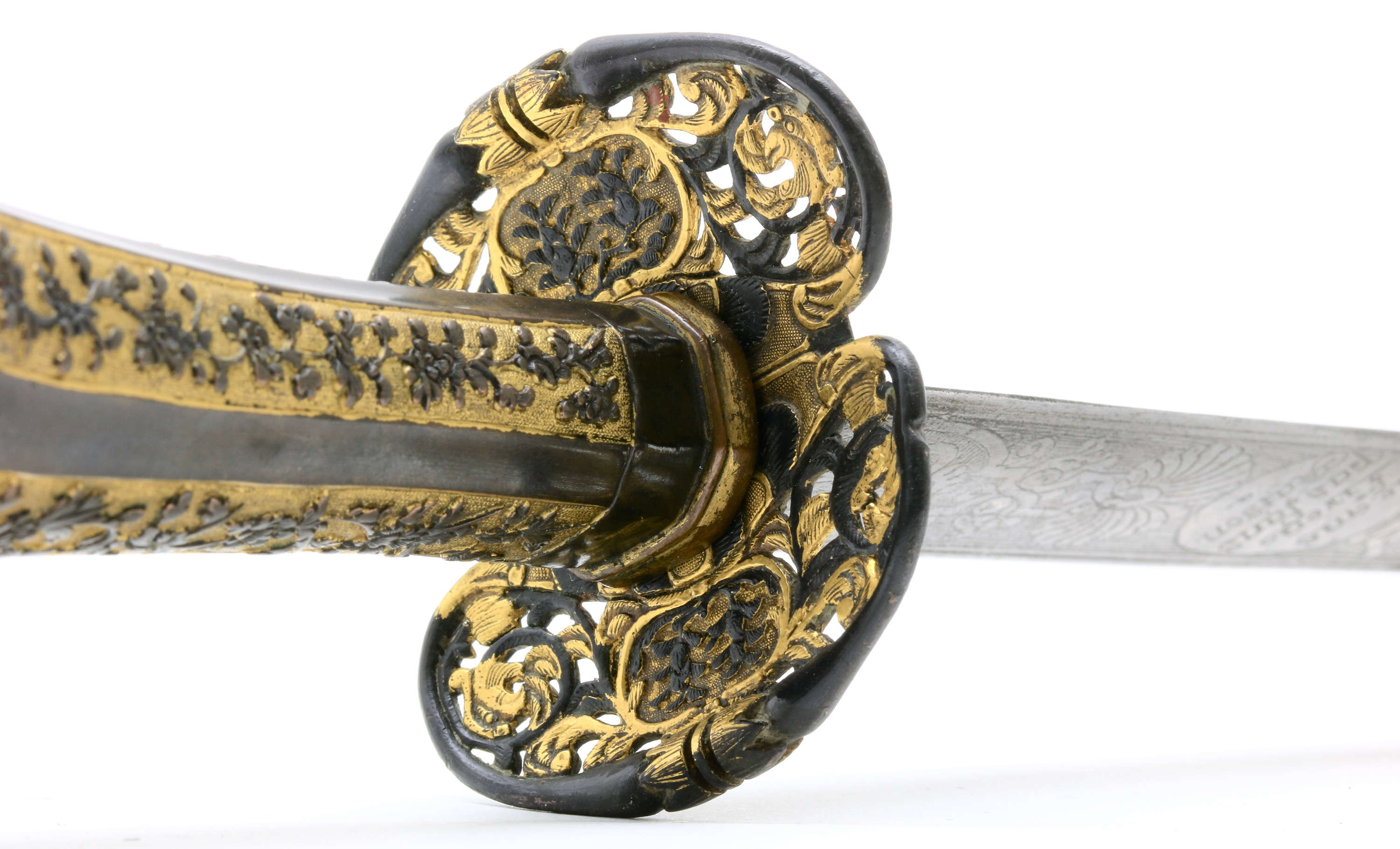 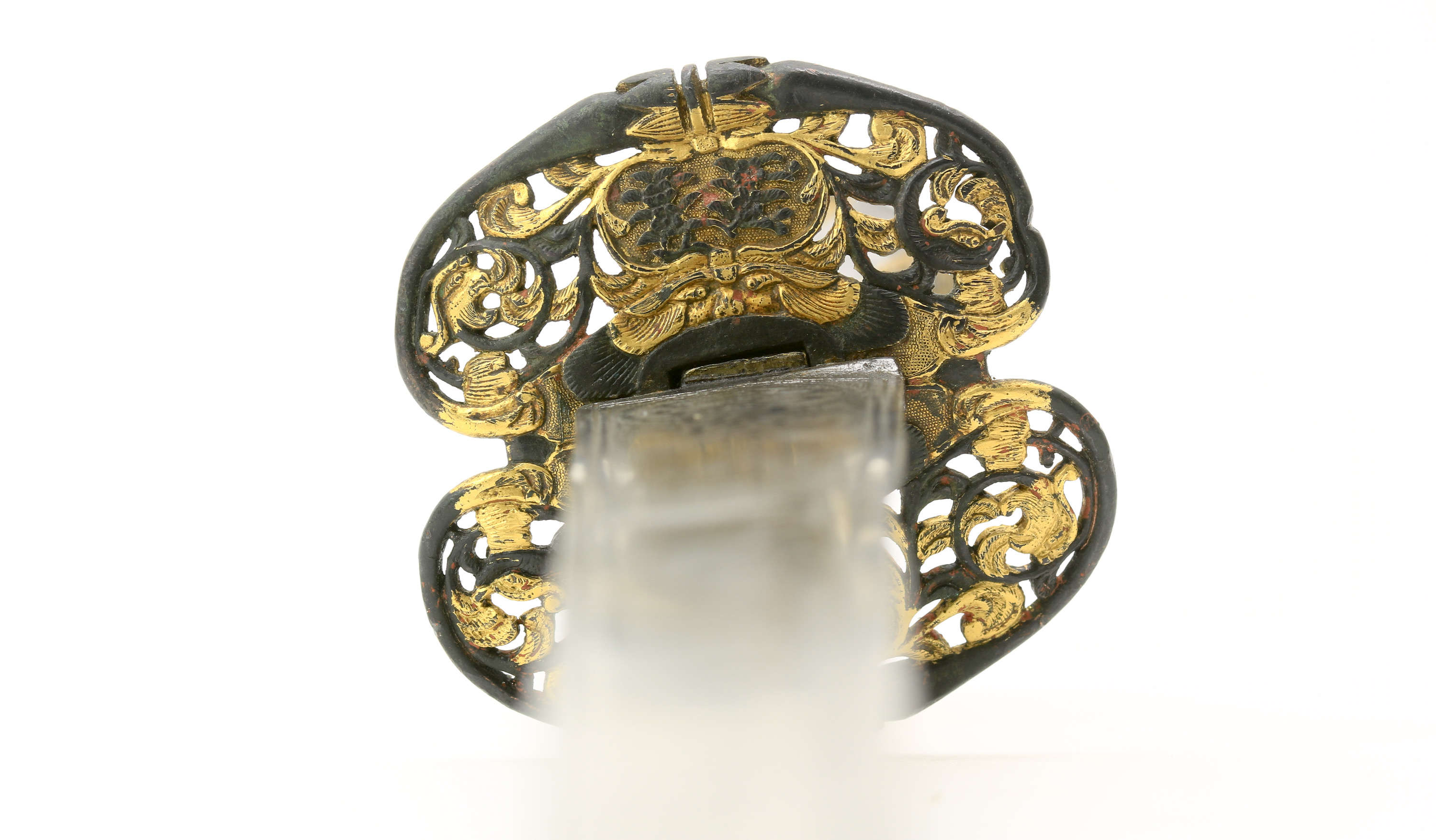 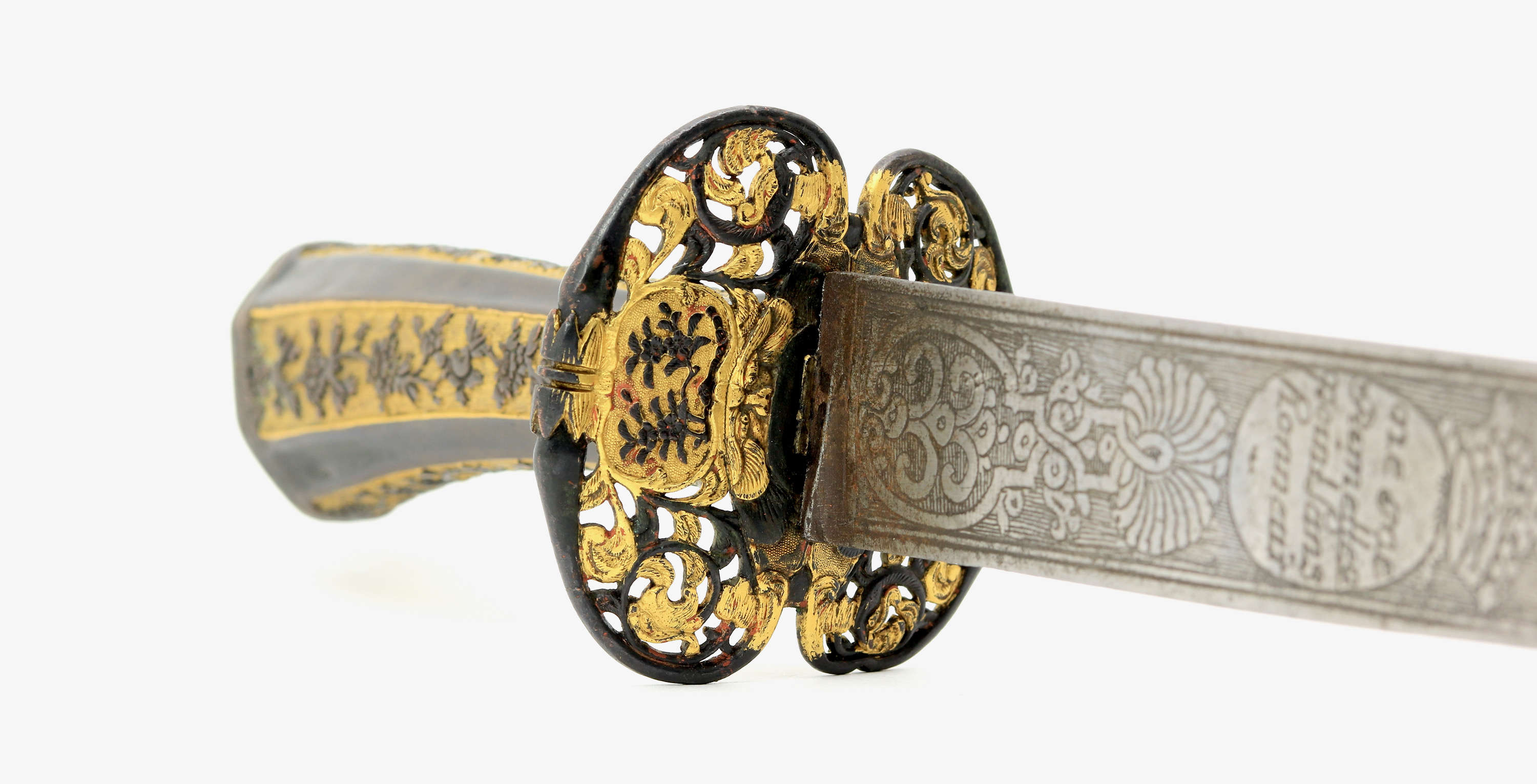 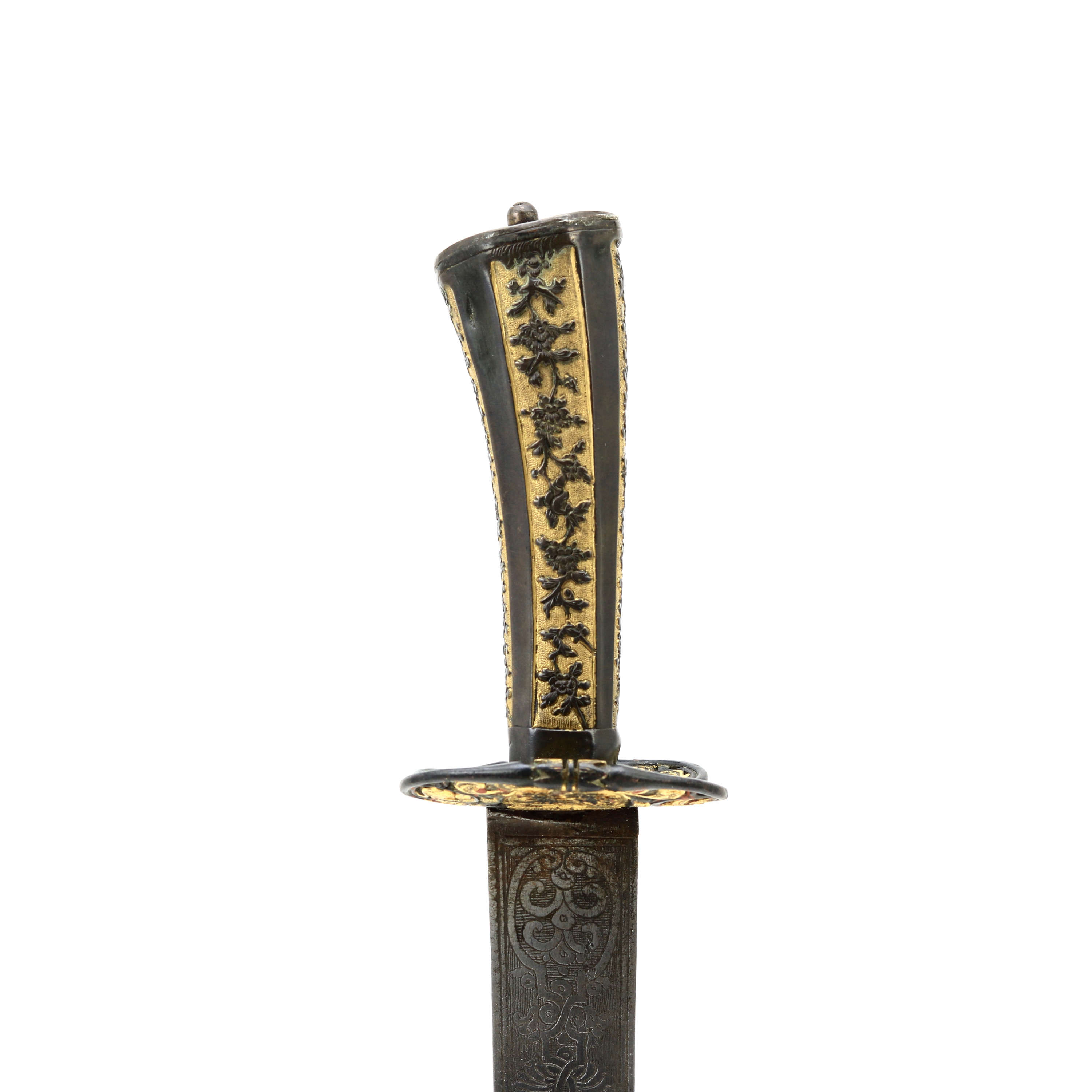