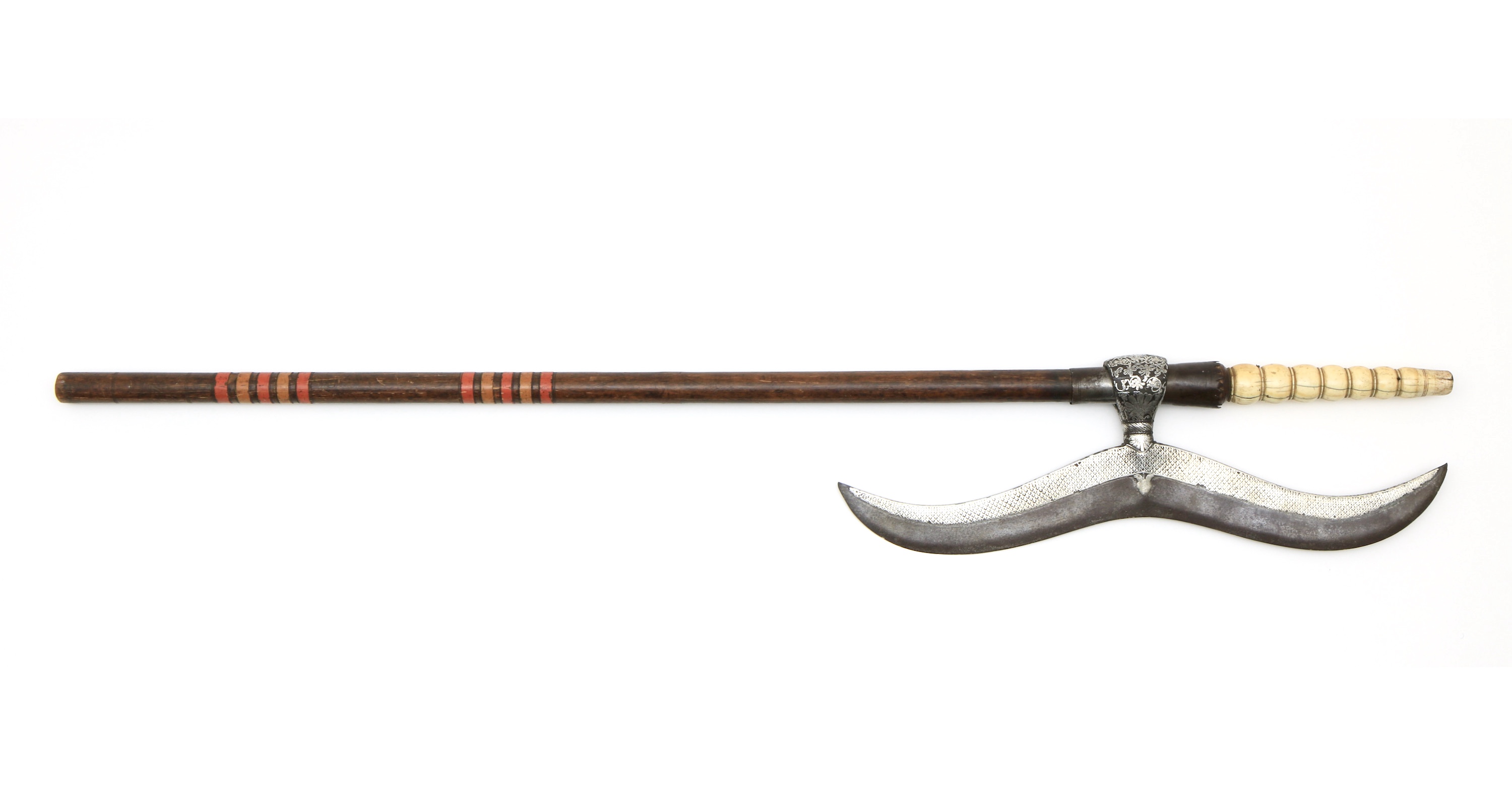 Axes such as this one are mostly associated with the Khonds, a clan-based tribal people of central, eastern, and southern India. They were their primary melee weapon, used in both hunting and warfare.

"The Khond usually carries a long staff, but when armed he wears a turban ornamented with a showy crest of feathers, and a strong cloth encircling his loins; he carries a bow and arrows, and a battle-axe with the blade in two divisions. He marches to battle singing, shouting, and brandishing his battle axe, most commonly under the influence of strong potations. The matchlock and shield are the favourite weapons of the people inhabiting the Southern district; but the curious and formidable battle-axe seems most relied on by the heroes of Boad and Goomsur." 1

"The following instance occurred to Lieut. McNeill when out bear shooting, accompanied by some Khonds, who had been rescued from sacrifice. He had posted himself in a favourable position one moonlight night, when a bear came up, but owing to the uncertain light, for the moon was not very bright, he only wounded the beast slightly; it made off at once right across the rice fields in the open plain, with the intention of seeking shelter in the neighbouring hills, without allowing time for the adjustment of the sight for a second shot.

The Khonds had started at full speed in pursuit, to cut off the animal's retreat to the hills; they soon placed themselves between the bear and the hills, and then with axe in hand they resolutely attacked him, and literally hacked him to pieces in less time than it has taken to narrate this adventure. The axes used were certainly formidable weapons, but it requires more than ordinary courage to attack a savage bear with such instruments as these, by moonlight, and on broken ground." 2 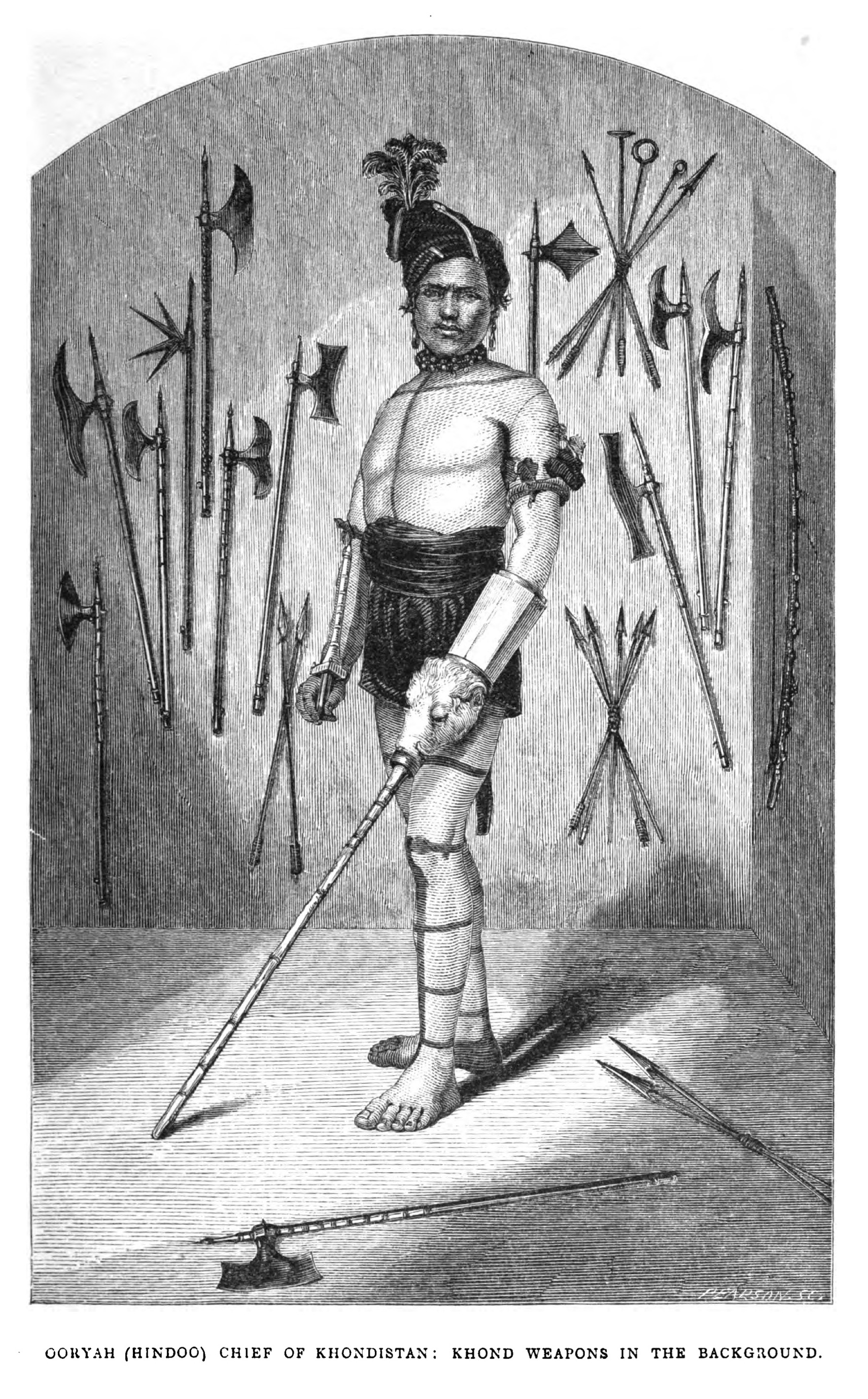 A survey through the standard literature gives various names for these axes, possibly reflecting various dialects in use. Lord Egerton of Tatton, writing in 1880 calls them pharetri and gives the Hindi name tonngya while George Cameron Stone, well aware of Egerton’s work from which he quotes extensively, insisted to call them bullova instead in his 1934 "Glossary". It was this name that mostly stuck with collectors until today.3

Of classic form, with a mustache-shaped blade, but easily the best example of this type that is known to me in both private and museum collections.

While the style is very much central Indian tribal, the workmanship is not. The blade is richly overlaid with geometric patterns in silver on both sides and the back. The socket is beautifully overlaid with stylized floral motifs. Both style and workmanship of the overlays are what one would expect from some of the better koftgars (precious metal encrusters) in the more metropolitan areas of Deccan India. The axe is seated on a hardwood shaft that is decorated with bands of yellow and orange decoration. The upper part is reinforced with an iron sleeve with a serrated top. At the very top is fitted a turned ivory finial, missing a spiked cap at the very end.

A puzzling thing about it is just how good it is, far exceeding the quality of any of the similar style axes presented to King Edward VII, when Prince of Wales, during his tour of India in 1875-76. None of the famous 19th and early 20th century collectors have found an axe in this style that is this ornate, and no museum collection that I know of has one.

It was probably either commissioned by a wealthy Khond chieftain himself or made to present to one by someone with access to these kinds of craftsmen. Local landowners, called zemindar, enjoyed the status of minor kings with small scale courts at among others Baudh, Dashapalla, Patna, Kimedy and Guddapur would more likely have access to this kind of work.

The red and orange bands and turned grooves on the shaft, as well as the style of the silver decoration, seem to point to a rather southern origin, possibly the Khonds of Andhra Pradesh.

The piece comes from Han Hendriks (1919-2008), a notable Dutch blacksmith with a forge in the Balistraat, The Hague. He kept a study collection of antique metalwork from around the world, most of it acquired in the 50s and 60s, some of which I have been able to purchase from his descendants.

CITES
To meet the demands of the Convention International Trade of Endangered Species (CITES), this object is sold with an appraisal document from a certified Dutch appraiser of the TMV Federation. The finial is of ivory of the species elephas maximus, listed on CITES appendix I.

Buyers outside of Europe: Beware that it may not be possible to export the item to your country due to restrictions on the international ivory trade. CITES sets the minimal restrictions, countries, and states under the convention often maintain further restrictions on top of CITES. Export permits are increasingly hard to obtain. 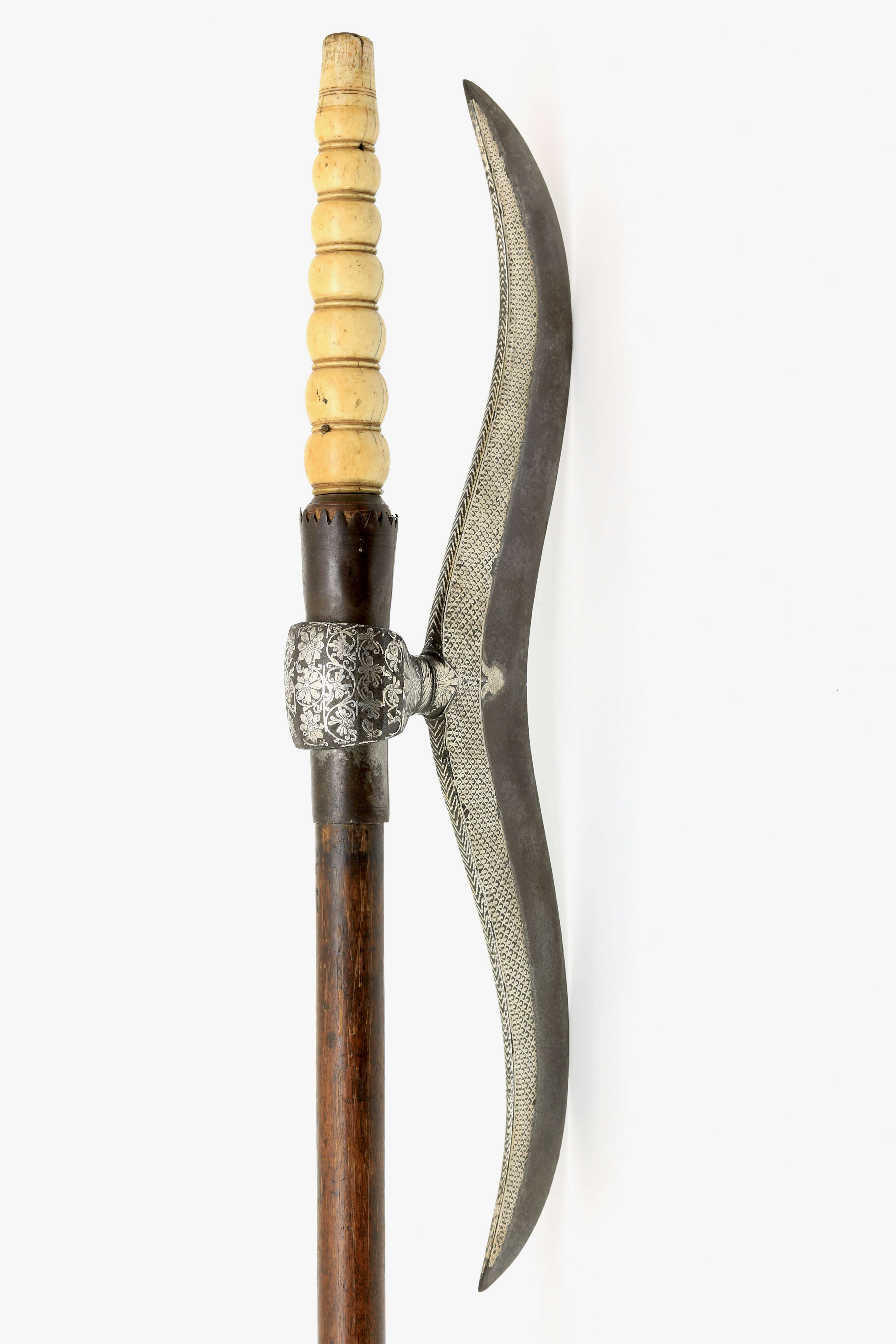