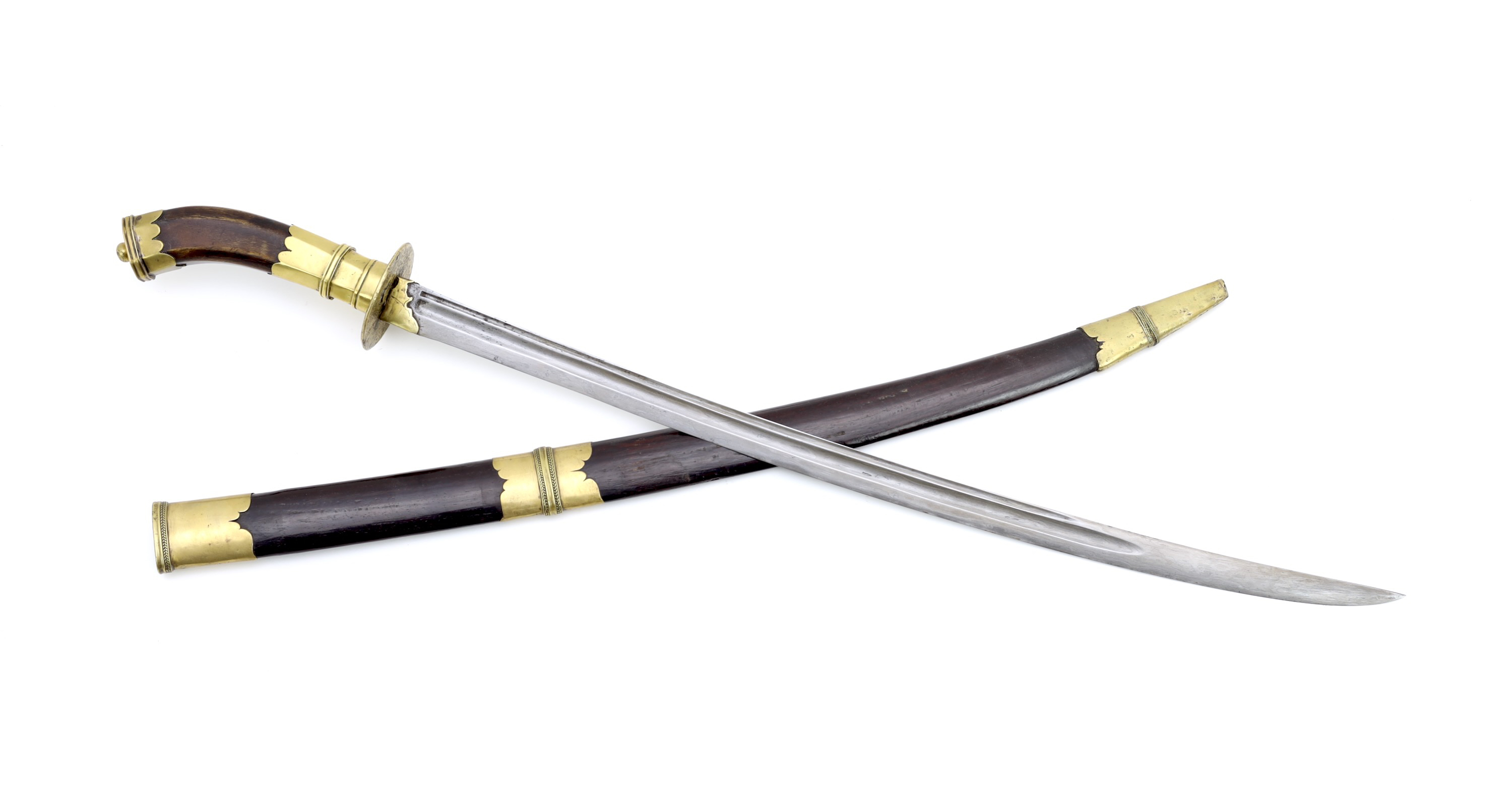 Previously in the collection of Philip Tom

A rarer type of Vietnamese saber, probably dating to the late 18th to early 19th century.

It has a narrow, springy blade with two well-defined fullers; a central wide groove flanked by a narrower dorsal groove on top. The blade is forge folded, showing an attractive wood grain especially where the grooves are cut and lower layers are exposed.

At the base is a brass collar piece, equivalent to the Chinese tūnkǒu (吞口). The pistol-shaped hilt consists of a horn grip section of octagonal cross-section that bends at an angle towards the pommel. Pommel, ferrule and guard are made of brass. The guard is modeled after a Japanese tsuba, with the two openings (hitsu-ana) that the Japanese cut into their guards for two extra tools they carry. 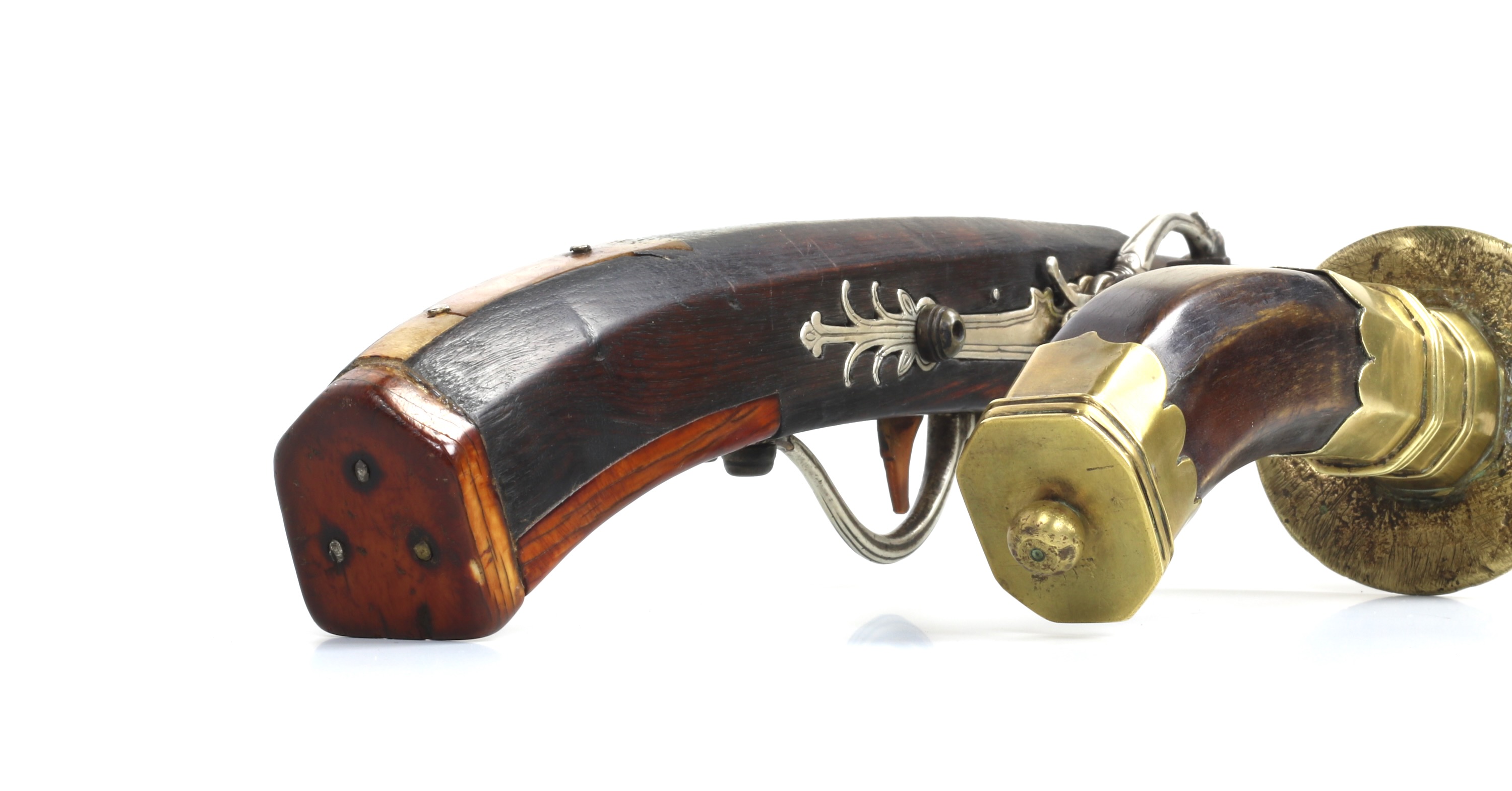 The hilt of the saber somewhat reminds of the butts of 18th century Vietnamese matchlocks.

Japanese design features are common on arms in the area because in the late 16th and early 17th centuries many Japanese fled war-torn Japan and settled in Vietnam and other parts of Southeast Asia. They served as negotiators, translators and mercenaries for various parties, including the colonial forces that had just entered the stage. As most Japanese refugees were men, they married local women and so their culture quickly assimilated into the local culture. By the late 17th century, no one spoke Japanese anymore but hints to their presence remain in little details like the openings in this guard. 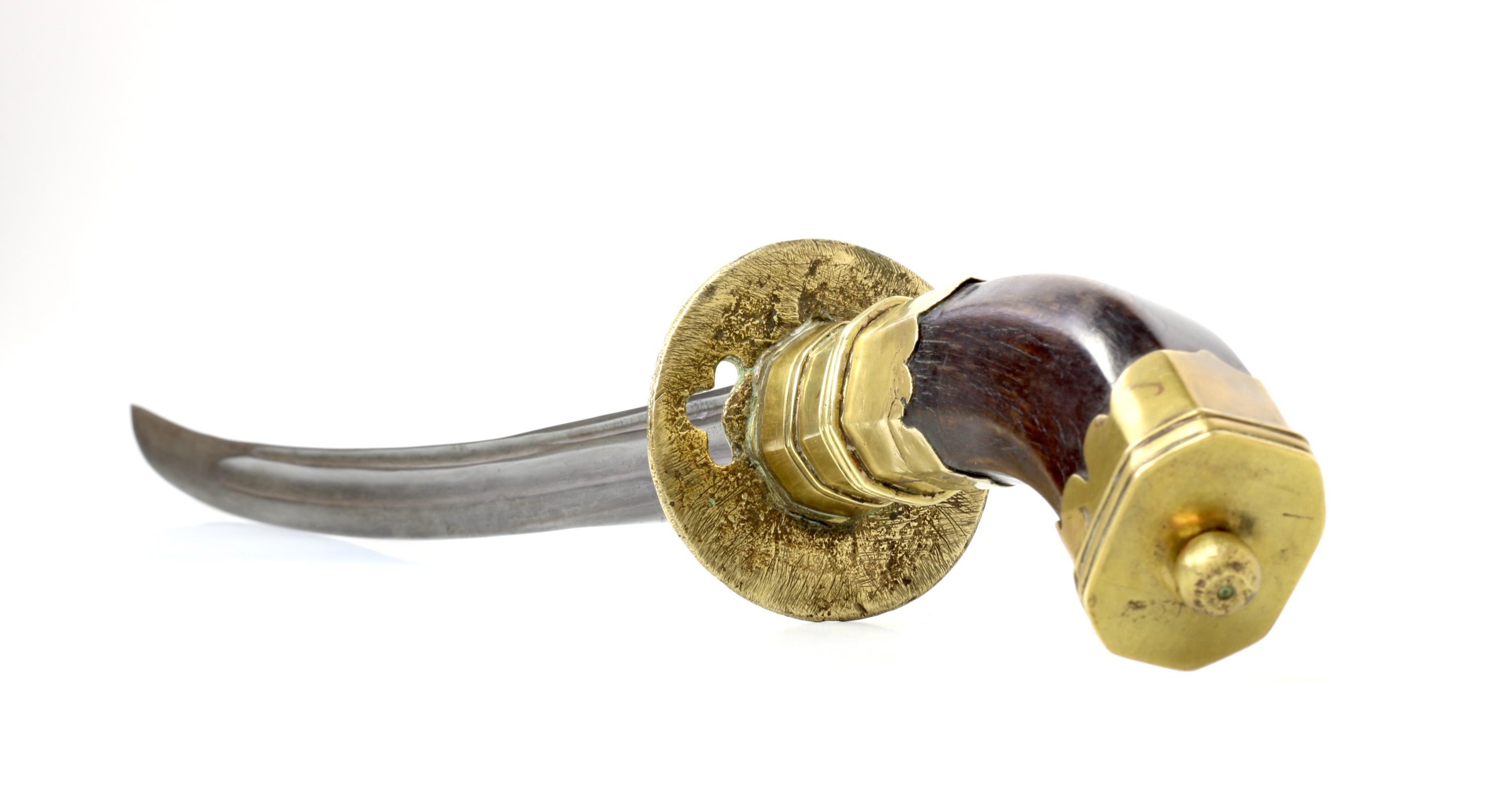 The openings in the guard, after Japanese examples.

The scabbard follows the typical Vietnamese pattern, made of two slabs of wood held together with three brass mounts. Both the pointy profile and setup with three scabbard mounts are also seen on Ming artwork but fell out of use in China during the Qing while the practice was continued in northern Vietnam.

In decent condition with some small losses and cracks to the brass furniture. One hairline crack in edge, otherwise no nicks or pitting. 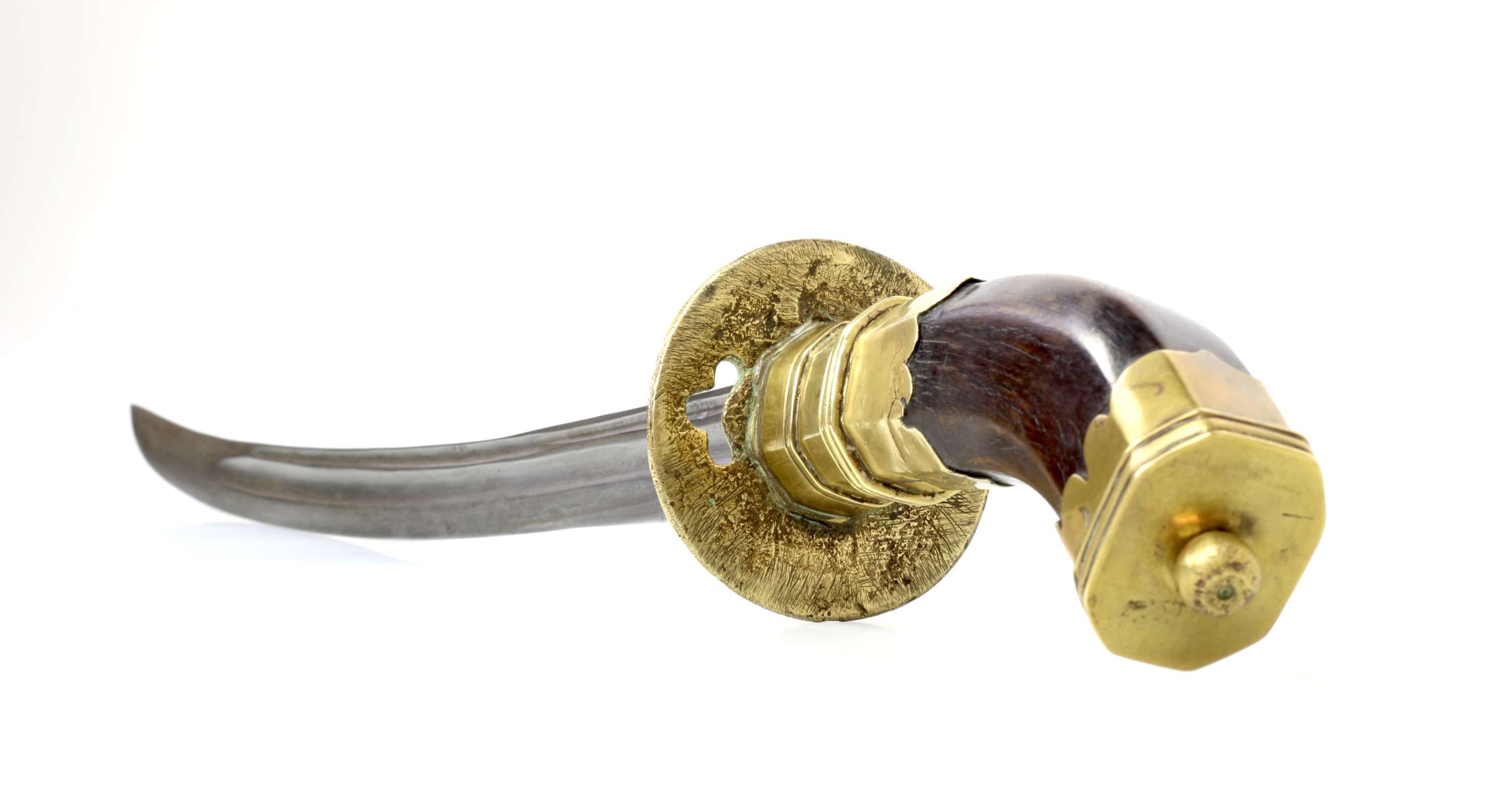 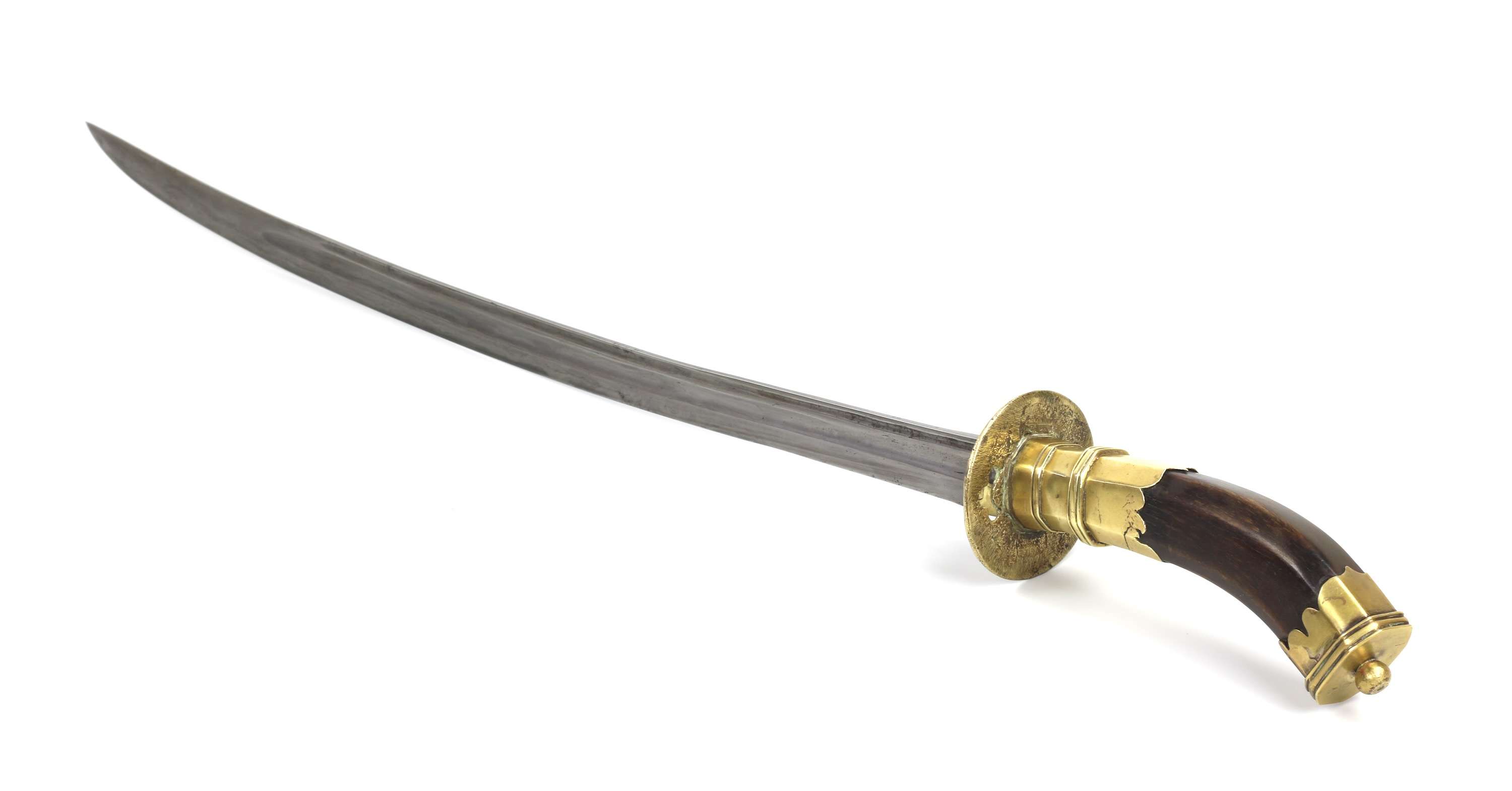