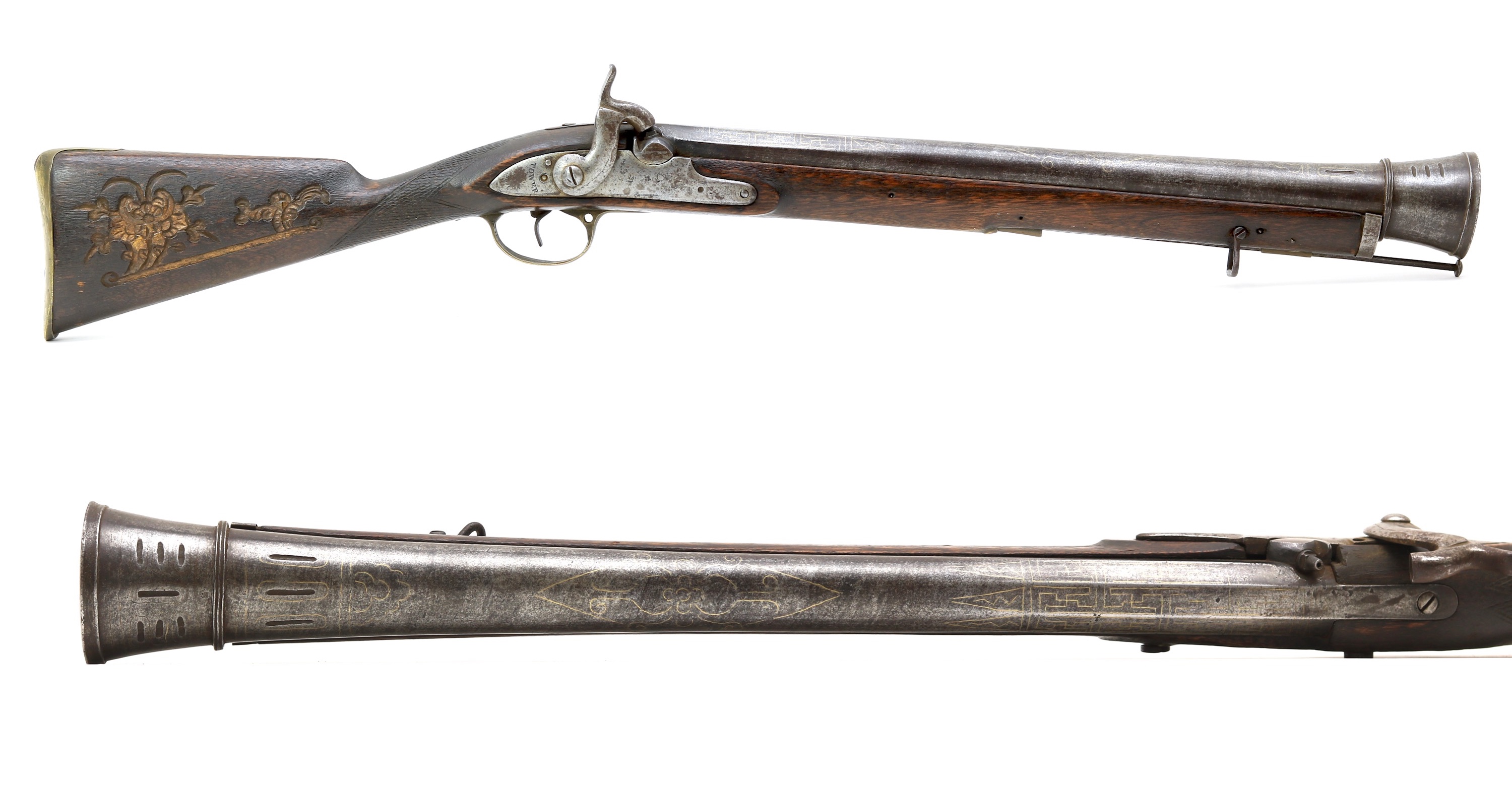 Made by Peranakan / Straits Chinese.

For the local Sumatran market.

Purchased from a French collector.

A group of remarkably similar blunderbusses has been encountered by Dutch colonial forces during their campaigns on Sumatra. They started to appear from around the 1860s onwards and are often equipped with English flint or percussion locks, many of them proof marked "Tower".1 Dutch ethnographers noted that neither the Acehnese nor the Batak who carried them produced firearms themselves. 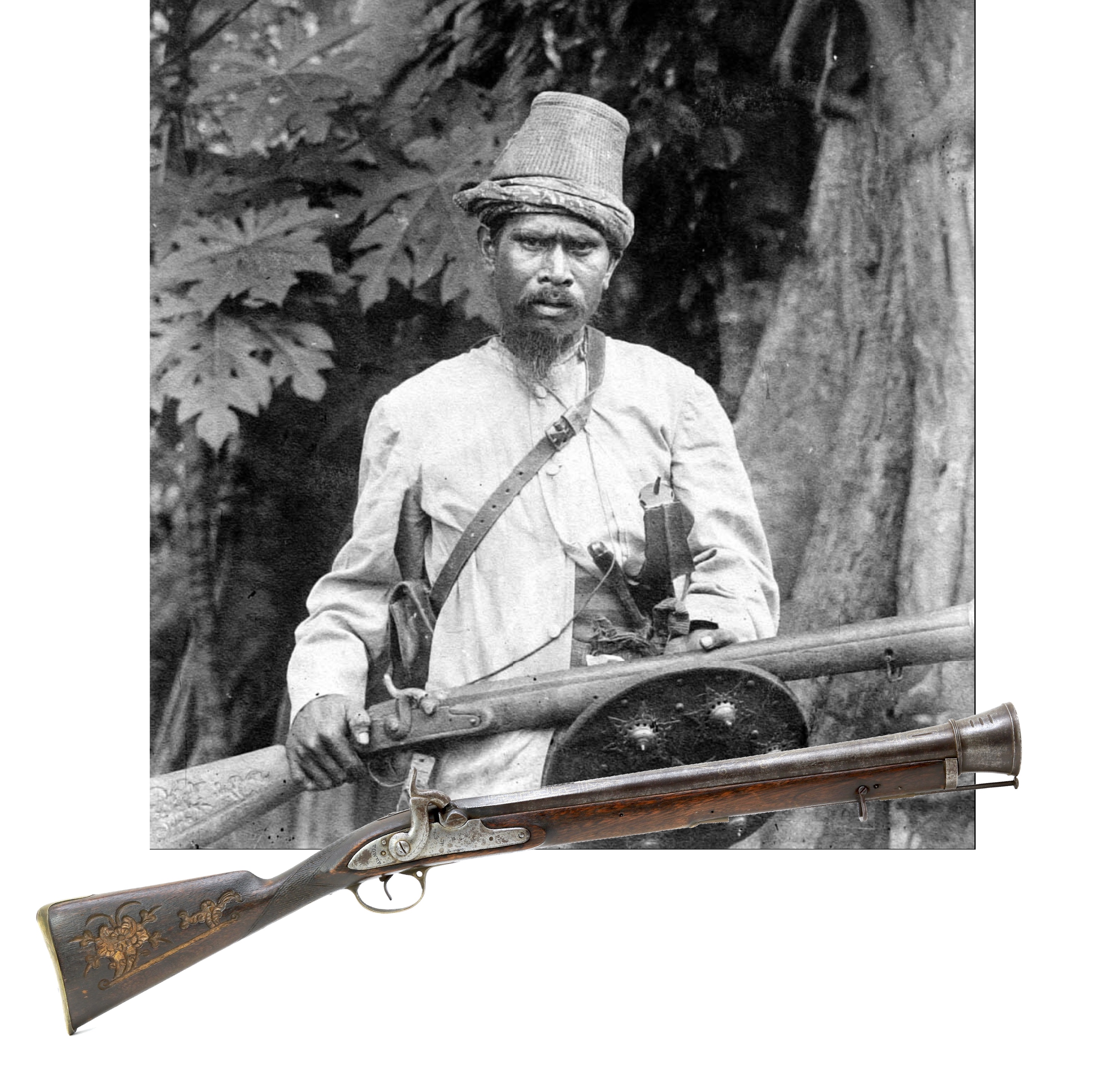 Aceh warrior with near identical blunderbuss, up to the design on the stock.
Superimposed on the image, our blunderbuss.
Photo from Tropenmuseum Collection, Amsterdam.

Designs on these may provide a hint towards their manufacture. The carved stocks are often decorated in the a southern Chinese style. The barrels are all inlaid with silver or brass with a number of designs including swastikas and flowers.

We know that good quality firearms were made for export on the island of Borneo. Especially Banjarmasin and its surrounding kampungs or villages, most notably the village of Negara.2 However, none of the blunderbusses with Borneo provenance have that decoration we find the Acehnese examples with.3

One example with the same decor as ours on both barrel and stock, in a private collection, has the underside of the barrel and inside of the stock marked "正一" meaning something like "true one" in Chinese. Probably assembly marks that confirm Chinese manufacture of these.4

This in itself is not surprising, Chinese communities have long been spread throughout Southeast Asia, most of them craftsmen and merchants. (Those spread across the Malay world are also called Peranakans or Straits Chinese.) The question remains which Chinese community manufactured them and where exactly.

Notes to introduction
1. Search for "donderbus" on the sites of Museum Bronbeek and the Dutch Ethnographic museums joint collection database so see the majority of the Dutch holdings of these.
2. A. Hendriks; Iets over de wapenfabricatie op Borneo. Part 18 of Verhandelingen van het Bataviaasch Genootschap van Kunsten en Wetenschappen. Bataviaasch Genootschap van Kunsten en Wetenschappen, 1842.
3. For some blunderbusses with Borneo provenance, two of which made in Negara, see National Museum of Ethnology accession numbers RV-16-298, RV-781-88, RV-2609-2 and RV-2609-3.
4. David Schenne, Facebook conversation.

According to Dutch sources, these weapons were filled with a heavy charge of powder and all kinds of schrapnel ranging from nails, glass, stones, iron bullets after which is clay, grass or fabric stopper is added.1 Stranger contraptions are also found, such as a multi-pronged spear-like charge for a blunderbuss. . They are used in ambushes and raids, and usually shot without aiming.

A textbook example of a blunderbuss as used on the island of Sumatra in the second half of the 19th century. It features a twist-forged barrel with octagonal breech, its facets gradually fading into a round cross-section barrel with characteristic trumpet-shaped muzzle. The barrel outside is polished smooth, the inside relatively coarse.

It is fitted with a British percussion lock marked "Tower", a crown, and some text that faded; British military surplus items that miraculously made it to populations under Dutch control throughout the Malay archipelago and found ready use among those that resisted Dutch rule. With the Dutch and British competing for power in the region, the distribution of these parts was probably quite deliberate.

The top of the barrel is decorated with a series of short grooves near the muzzle and inlays of brass that look like gold when brightly polished. The inlays consist of swastikas at the octagonal section and floral and geometric elements on the rest of the barrel. The triangular shapes seen may represent auspicious tumpal motifs.1

The stock is made of a dark wood, carved in the European fashion. It has a thick brass butt plate and iron protector for the end of the forestock. The triggerguard is made of thick brass. On the left side, the stock is carved with floral motifs in a southern Chinese fashion.

In very good condition, complete and with a nice undisturbed patina throughout. No major damage to stock. Barrel free of rust and pitting on the outside. Lock is in perfect working order.

The shape of the barrels tend to all vary, but all of the above have stocks carved in the exact same manner as ours. Whoever made them, they were operating a thriving business.

A nice, complete and charming example of a rare blunderbuss that was widely used on Sumatra by the Batak and Acehnese. They were probably made and traded by Peranakan craftsmen and merchants of Sumatra or surrounding areas.

Notes
1. See my glossary article on the tumpal motif. 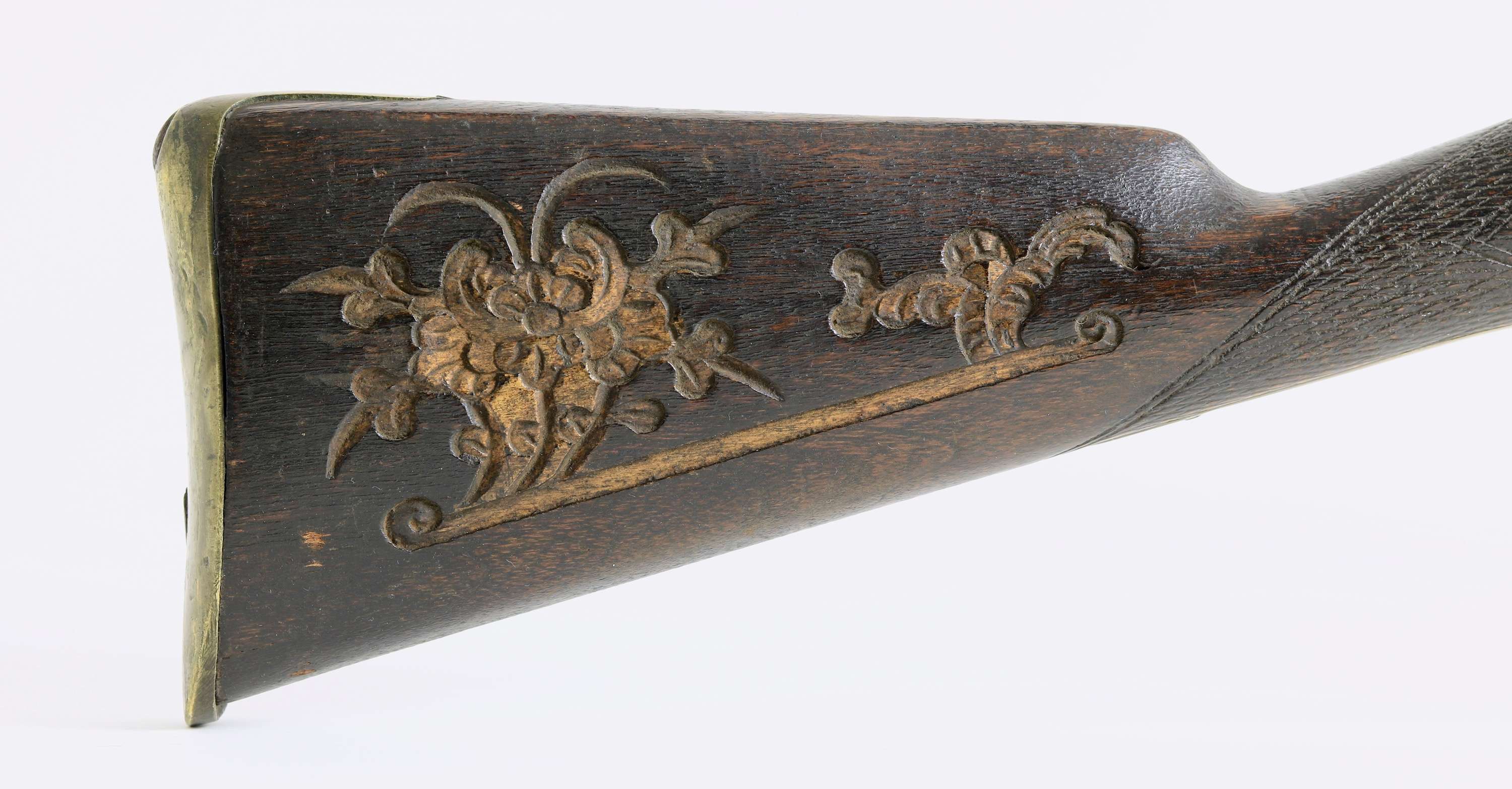 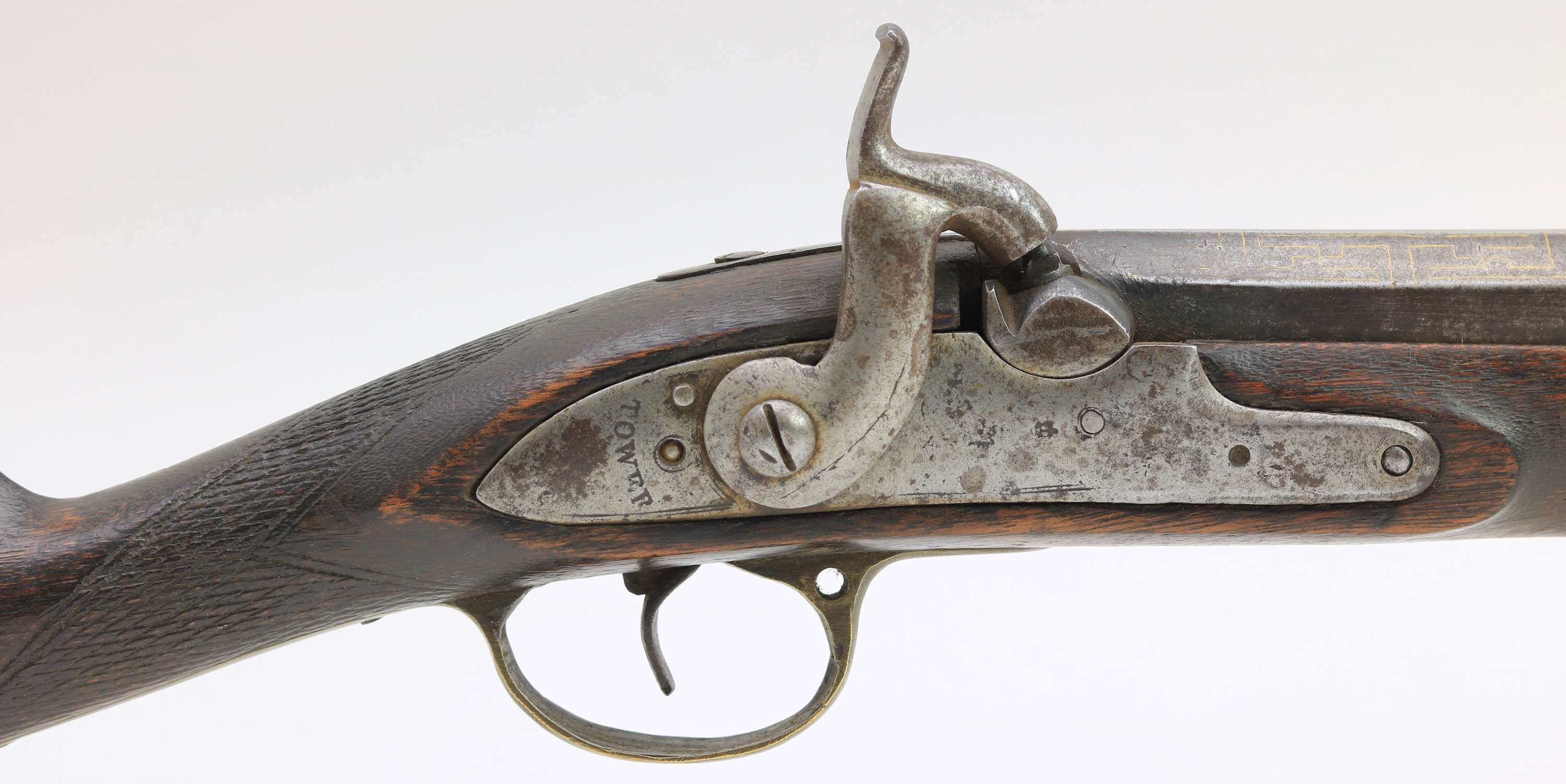 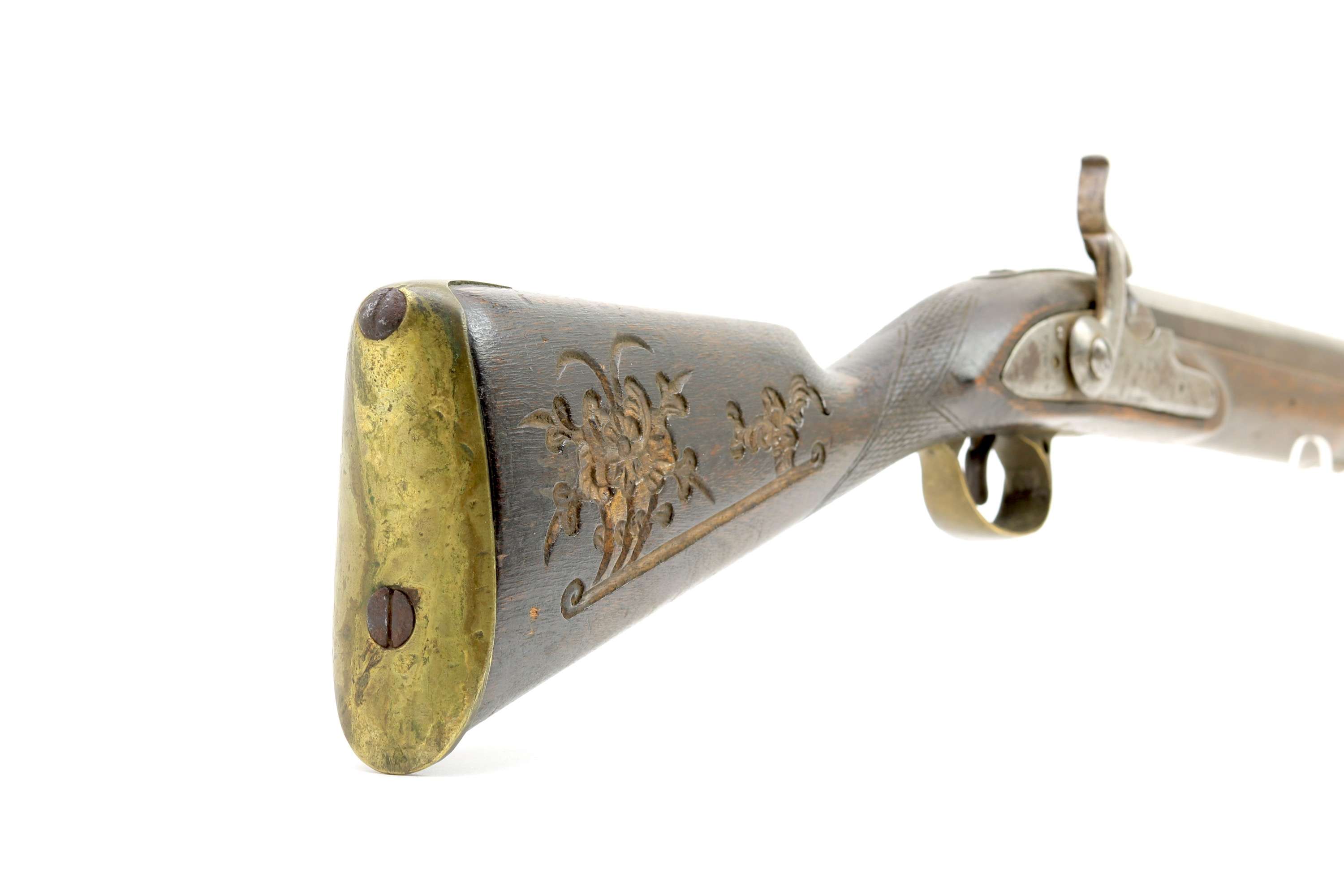