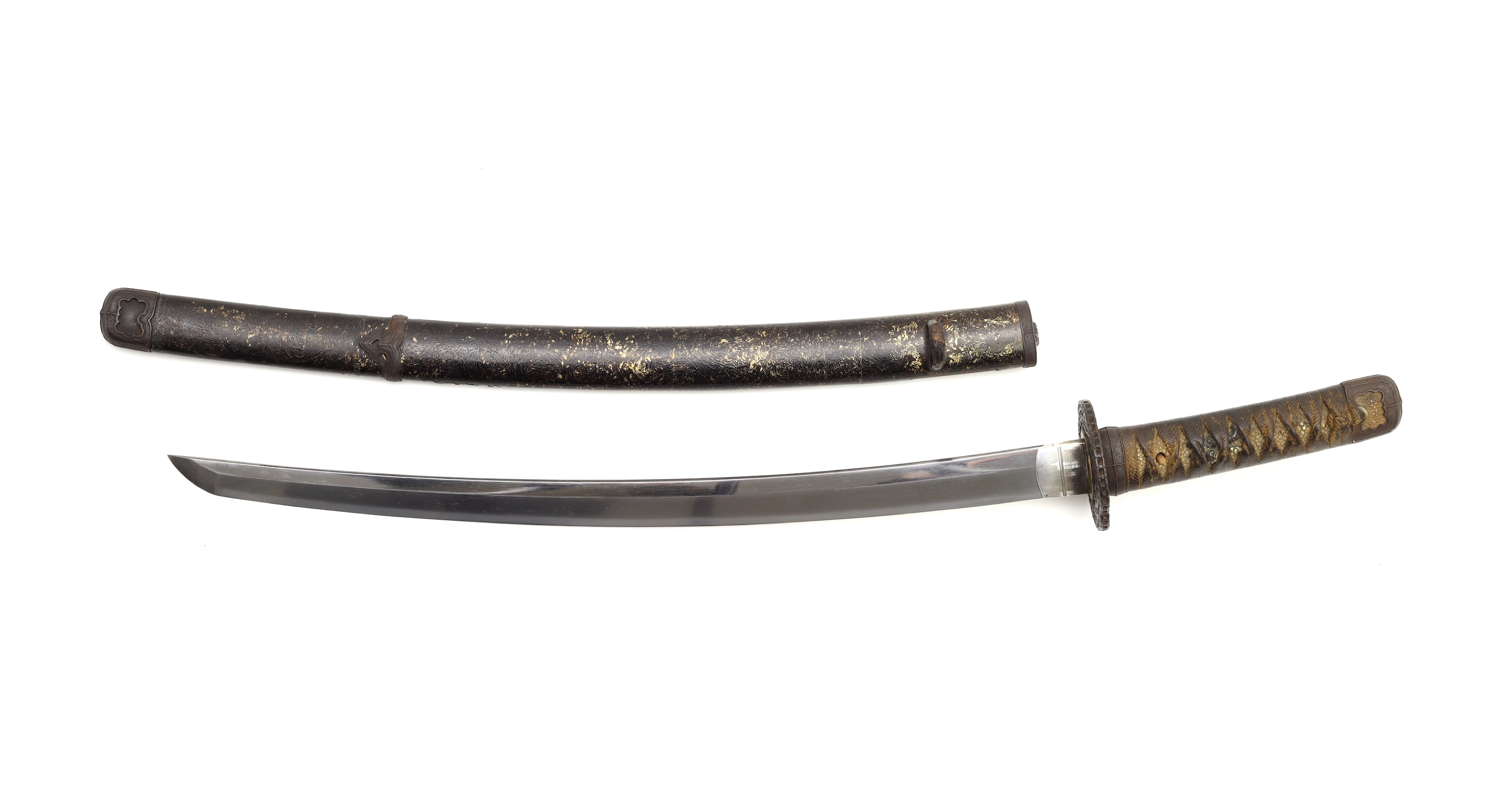 Blade 16 cm from base

Blade and mounts circa 1700

Standard Japanese blade style (shinogi-zukuri) with a deep curvature (sori). The forging pattern (hada) is a subdued itame with masame. It is tightly forged, with no flaws.

The temperline (hamon) is based on suguha (straight temperline), well-executed with good consistency from base to tip; signs of a skilled smith.

The hamon is executed with large visible martensite chrystals, (nie-deki). Nie chrystals are also seen above the temperline (ji-nie). The hamon at the tip (boshi) takes an early turn at the tip, called ko maru sagari. Activities within the hamon include some sunagashi where the wood grain pattern of the blade moves in and out of the hamon, causing streaks of nie like brushed sand. 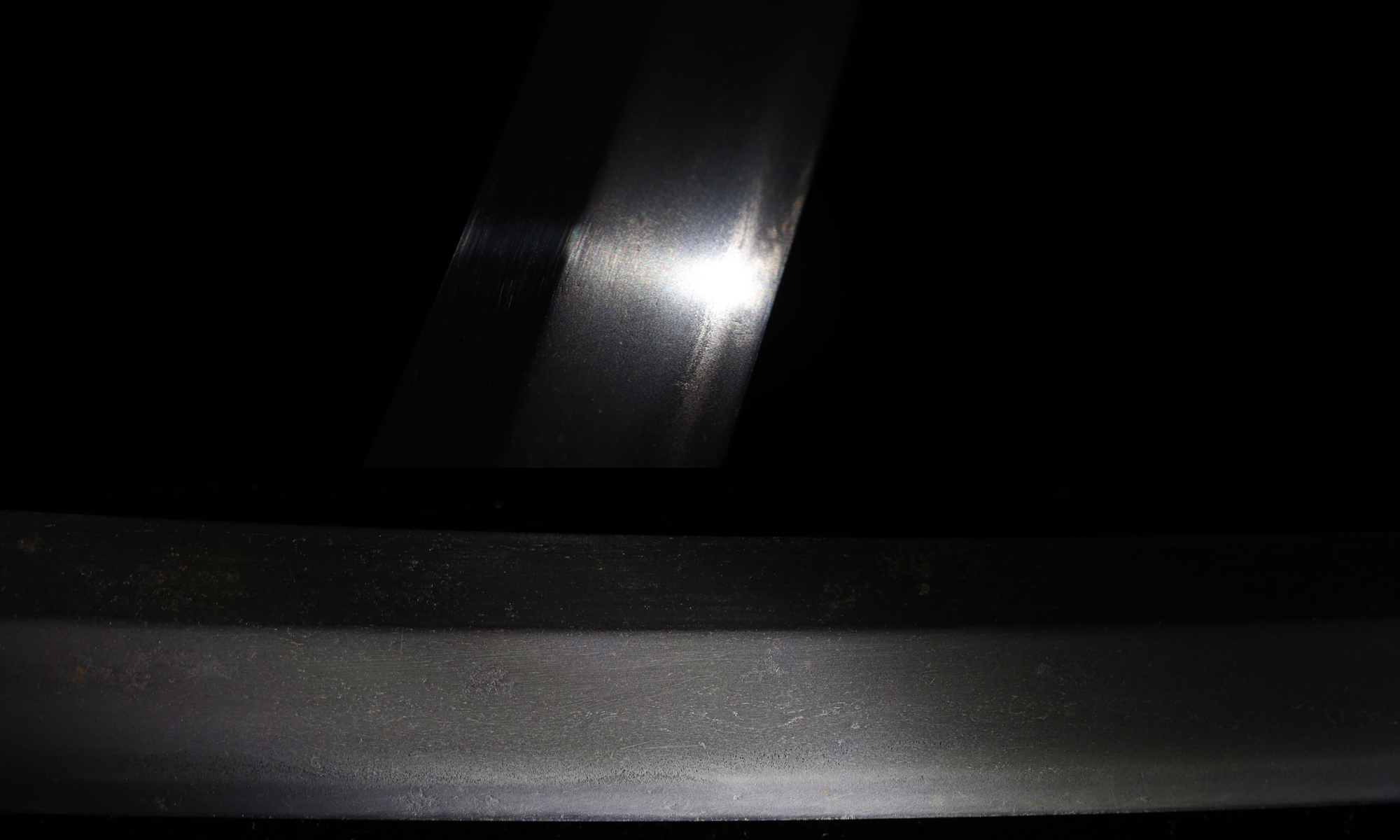 Details in the hamon as seen in different angles of light.

The blade is in an old sashikomi polish. This was the traditional form of Japanese sword polishing that was the norm before the more cosmetic hadori polishes became popular. Some dark spots here and there, but in stable condition. I did not take it to a polisher because I liked the fact that this is an old sword, in an honest old polish.

Short blades in this style, with deep sori, were popular around 1700.

It comes with a silver collar piece (habaki).

The nakago has an angled bottom (iriyama-gata), a stylistic trait associated with the Yamato-province schools, swords produced along the Hokurikudo, and Shinto swords. The file work on the nakago (yasurime) is kiri, or "horizontal".1

It has two holes, called mekugi-ana, for use with different mountings. The upper one appears to be punched, an older method, and the lower one is drilled. 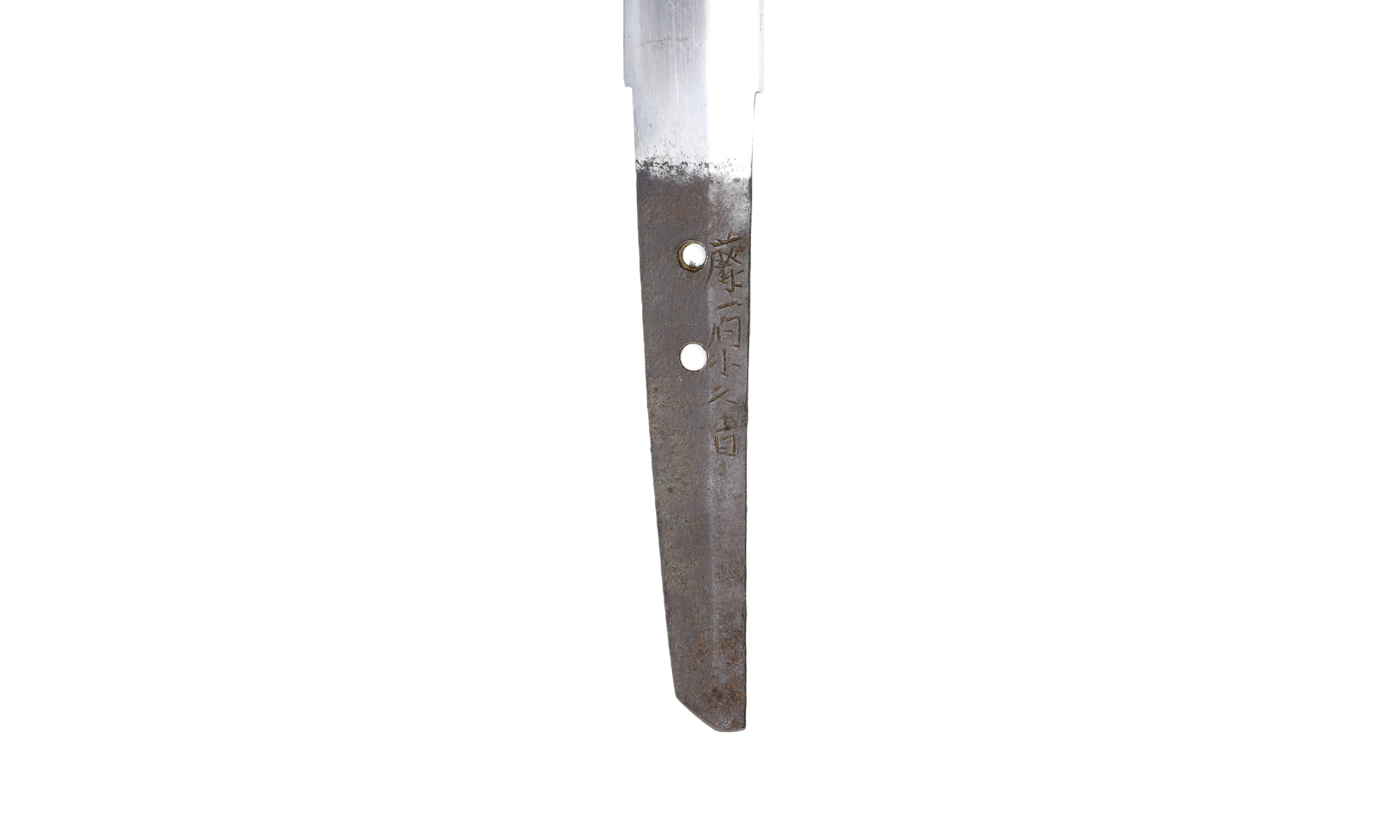 The nakago is signed:

Fujiwara is the name of a powerful Japanese clan from Yamato province. In swordsmith signatures it doesn't have to mean affiliation with the actual clan, it was also used as an honorific title.

The piece comes mounted in a style called handachi or "half-tachi". It is based on the earlier tachi form mountings, but instead of being worn edge down this sword is meant to be worn edge-up. The mounts are all russet iron, tastefully shaped with raised ridges.

The guard is Japanese-made but executed in a Chinese style, called nanban or "Southern Barbarian". It is profusely pierced, even the rim. The hilt (tsuka) is wrapped with golden brown silk, and it has two shishi-lion ornaments (menuki) under the wrap. 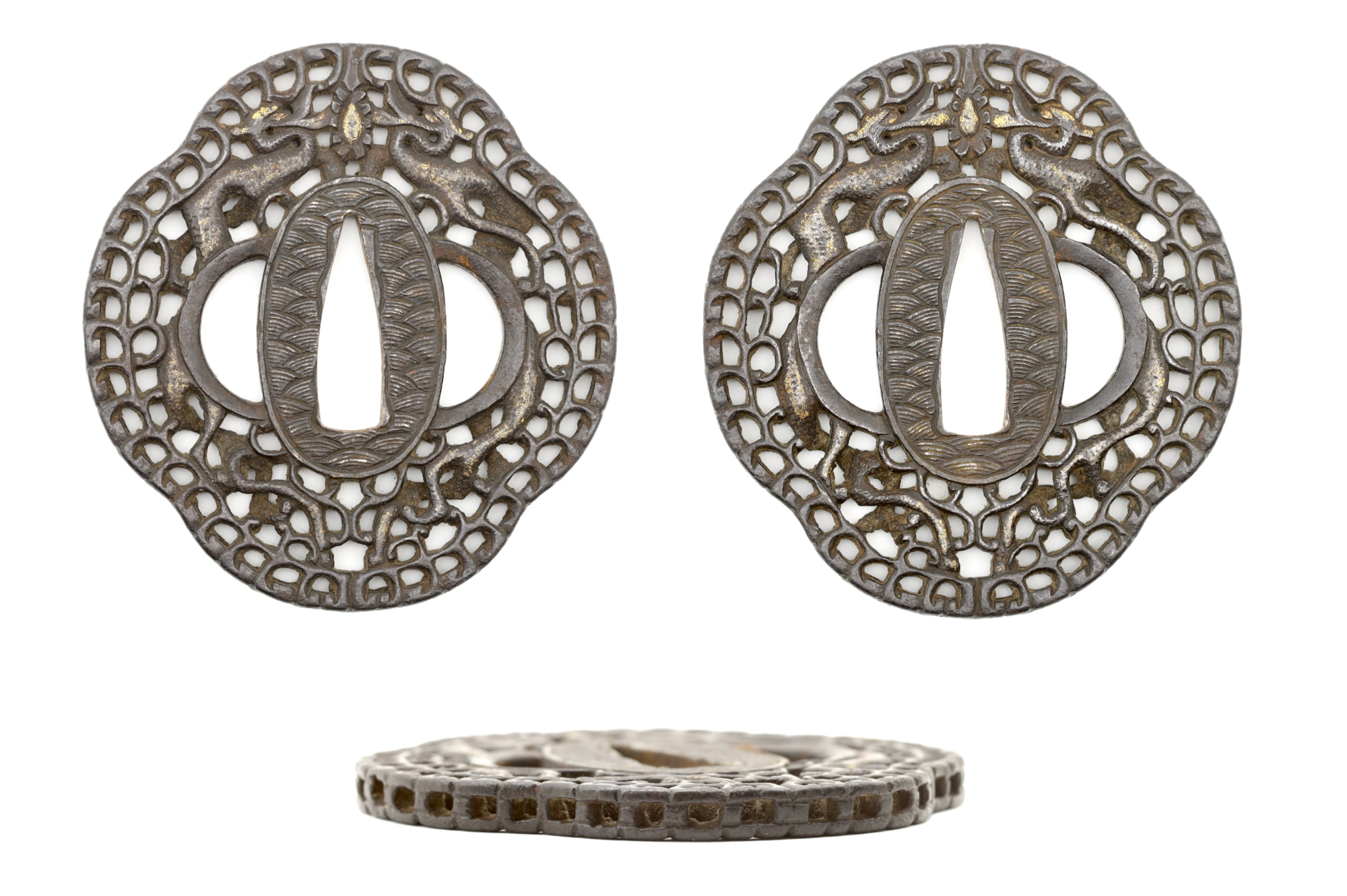 The guard, seen from both sides and the pierced rim.
The style with facing dragons is also known as "Canton-style",
after the Chinese port of Canton.

The scabbard is lacquered black with swirls of gold.

It also has a nanban-style by-knife called kozuka. It did not come with the piece originally but it is a periodic and stylistic match so I added it to this ensemble.

The nanban-style kozuka is a rarity in itself.
Blade shows a hamon, and is signed with a partially legible signature.

With all its original parts and the older polish, this makes a nice package for the collector who is looking for a representative Japanese shortsword of the late 17th to early 18th century.

During the Tokugawa period, the handachi mountings were stipulated to be worn by samurai on (official) trips or when hunting.2 However, this being a wakizashi, it wasn't necessarily a samurai's weapon. Ordinary people, provided they could afford it, could also wear the wakizashi. Nanban-style guards were among others popular among doctors who were fascinated with Western medicine.3

The sword has no papers. When buying a big-name sword, papers are important because the bigger the name, the more people would try to fake this maker. Such fake signatures were common, even back when the original maker was still alive. In this case, the signature is of an unknown maker, and so we can be sure that it was not an attempt to raise the value of the piece, so papering this piece is less relevant. 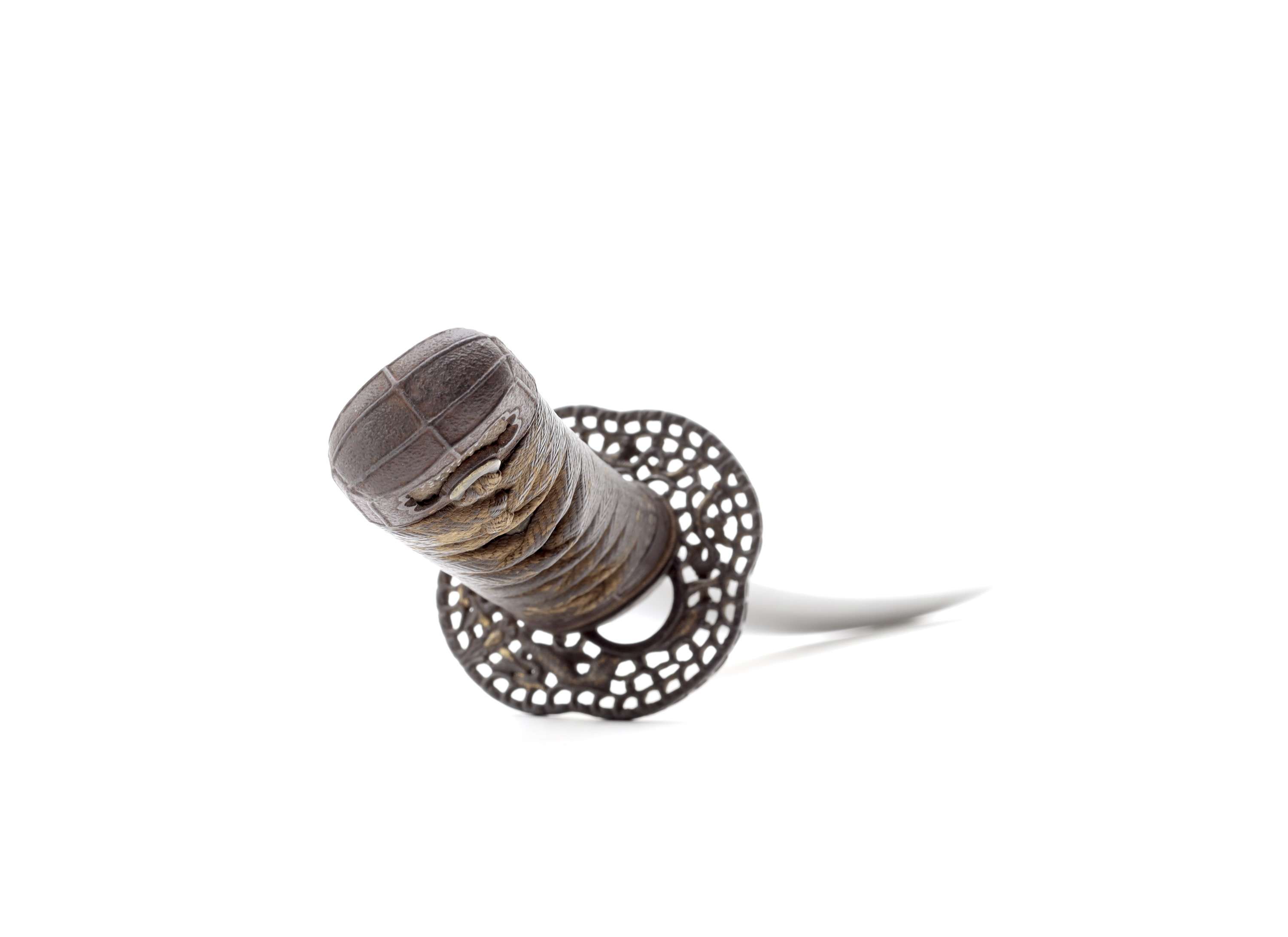