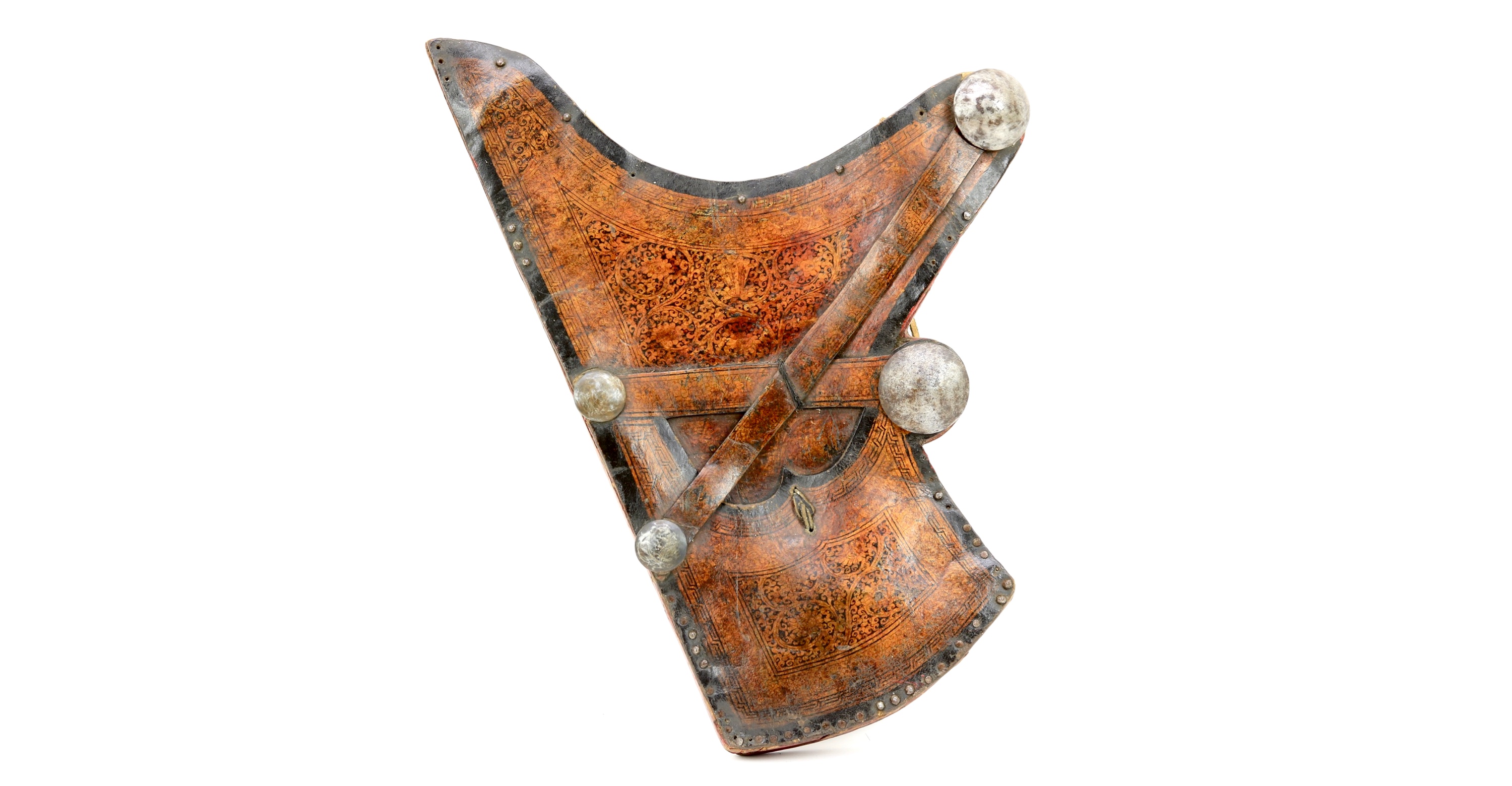 Thickness at base 37 mm

Purchased in the 1980s in Kathmandu.

In a Hong Kong private collection until 2019.

An early example of the Asian open quiver. This general type was used across Tibet, Mongolia, and China, this being Tibetan or Mongolian. The 18th-century Wǔ Tǐ Qīngwén Jiàn (五體清文鑑), a five language dictionary, refers to this type of quiver as mda‘ gdong (མདའ་གདོང་). The type is called sādài (撒袋) in Chinese and jebele in Manchu.

It consists of a wooden frame with a round base and a beam projecting upwards on the left. The wooden piece on the right was probably once also a single, curved piece, but is now in several fragments, with some of the pieces being later working-life replacements. A channel is cut into the base. Rawhide is applied to the back with nails, and two pieces of lacquered leather to the front in the same manner. There is an additional cross-strap running diagonally across a strap that is cut loose from the bottom lacquered part.

There are four iron domes bosses on the front that date from different periods. The large one on the lower right is the oldest. That above that one seems somewhat later. Those two on the left are newly constructed by a professional metal restorer. A braid of thick cord in the quiver's opening serves as a spacer for the arrows.

The front of the quiver is covered with gold dust suspended in varnish, now tarnished, that gives this piece its deep yellow-brown color. When new, it was probably a more brilliant golden yellow.

The surface was then carefully painted with black ink. The outline of the quiver is framed with a black border flanked against a geometric pattern known as "thunder scroll", somewhat similar to the "greek key" in European art. Then follows a wide border filled with floral scrollwork in very fine lines, also seen on the cross-straps.

In the center of the top part is an area with more bold floral scrollwork, the center roundel of which does not have a flower but instead shows the Three Jewels representing; the Buddha, the fully enlightened one, the Dharma, the teachings expounded by the Buddha, and Sangha, the monastic order of Buddhism. The panel in the center of the bottom section also shows this bold floral scrollwork, but without the Three Jewels.

The decoration is very nicely done, executed with confidence and precision in lines ranging from bold to very fine.

This distinct form of varnished gilded leather is seen on a number of objects that are dated to the 15th to 17th centuries. Important in relation to the current object, is that it is seen on a small group of very rare early closed tube quivers from the 15th to 16th centuries. While the shape of quiver transitions from tube quivers to open quivers, the decoration remained the same, indicating that open quivers decorated in this manner are among the first open quivers to have been used in the region.

A number of notable comparables stand out .

3. Forearm guard for the left arm. Metropolitan Museum, accession number 2001.35a. Showing similar style and workmanship to the preceding tube quivers, and a strong parallel to the quiver described in this article.

2. A quiver in the Royal Museum of Edinburgh, accession number A.1927.321A-O, dated 17th-18th century. Very flamboyantly decorated in what is clearly a somewhat later style. 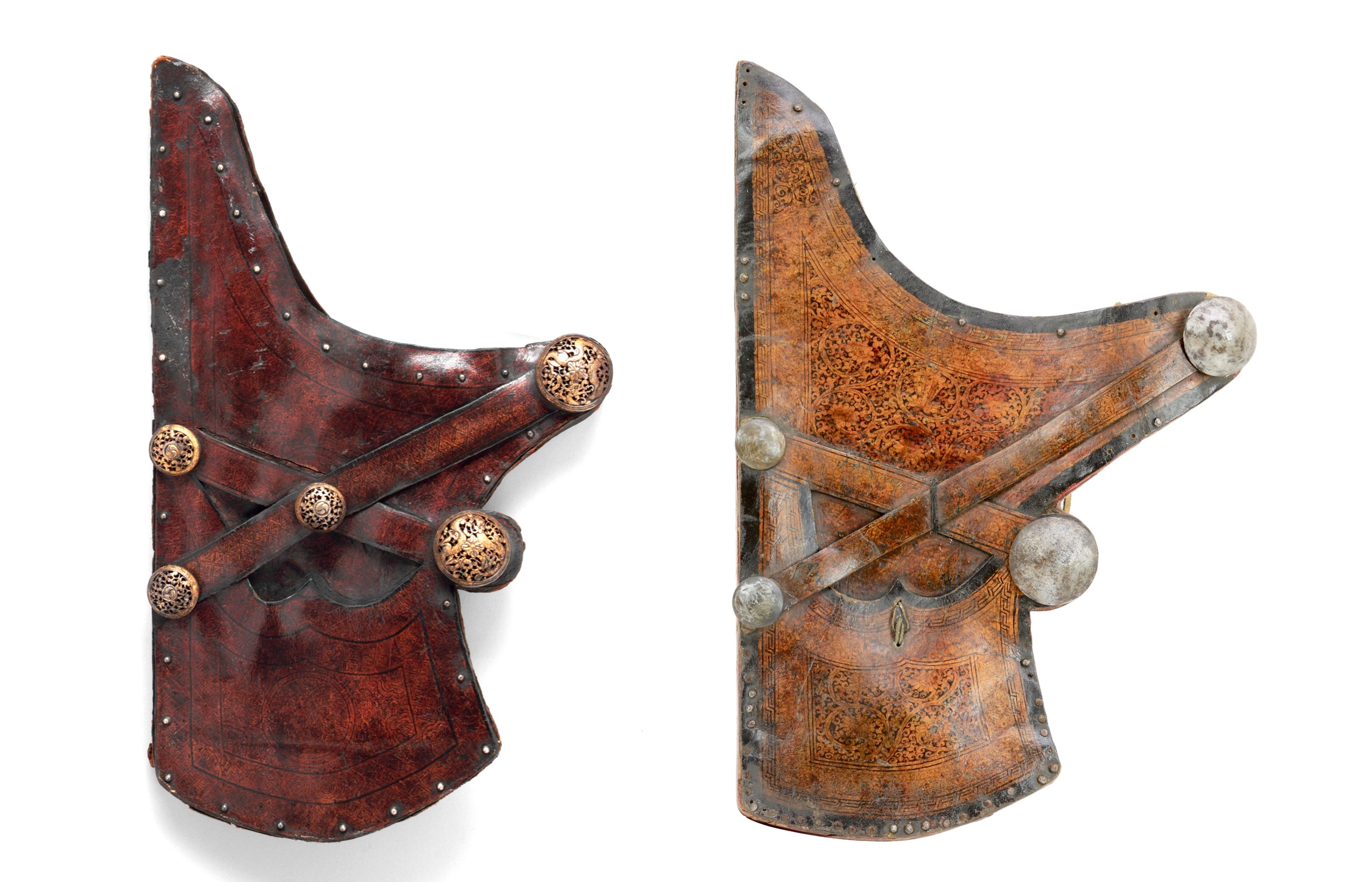 Quivers compared.
Left, Metropolitan Museum in New York, accession number 2003.344.
Right, the quiver that is subject of this article.

Closed quivers were the norm for Asian archers for many centuries. The shift towards open quivers that spread the arrows out like a fan seemed to have started in the late Mongol Empire, through contact with Islamic cultures.

A circa 1280 painting of Khubilai Khan hunting already shows a more open, more box-like design that was clearly inspired by Islamic quivers, and which were the start of the trend towards full open quivers. Remains found at Tsagaan Khad that were dated to the 14th century were also accompanied by an open quiver.2

The fact that our quiver is decorated in the same way as some closed quivers that appear date from the 15th century points towards it probably being from the final period of transition of the 15th to 16th centuries and so I believe this quiver to be no later than the late 16th century.

Leather faces front and back in very good condition for age. Wooden frame with damage, parts missing and working-life replacements on the right side, some losses to the base. Iron bosses are probably all later, the two on the left are recently made. Some of the nails that attach the leather faces are missing, those remaining indicate they are from different time periods. All this is to be expected, Tibetan items that were kept in monasteries remained in use during festivals for centuries, up to recent times.

A rare and early quiver that is decorated much like some late closed quivers, suggesting it is from a transitional period between the two. With repairs, luckily the star of the show, which is the front panel, remains in good condition. One of the earliest open quivers I've had the pleasure to own. 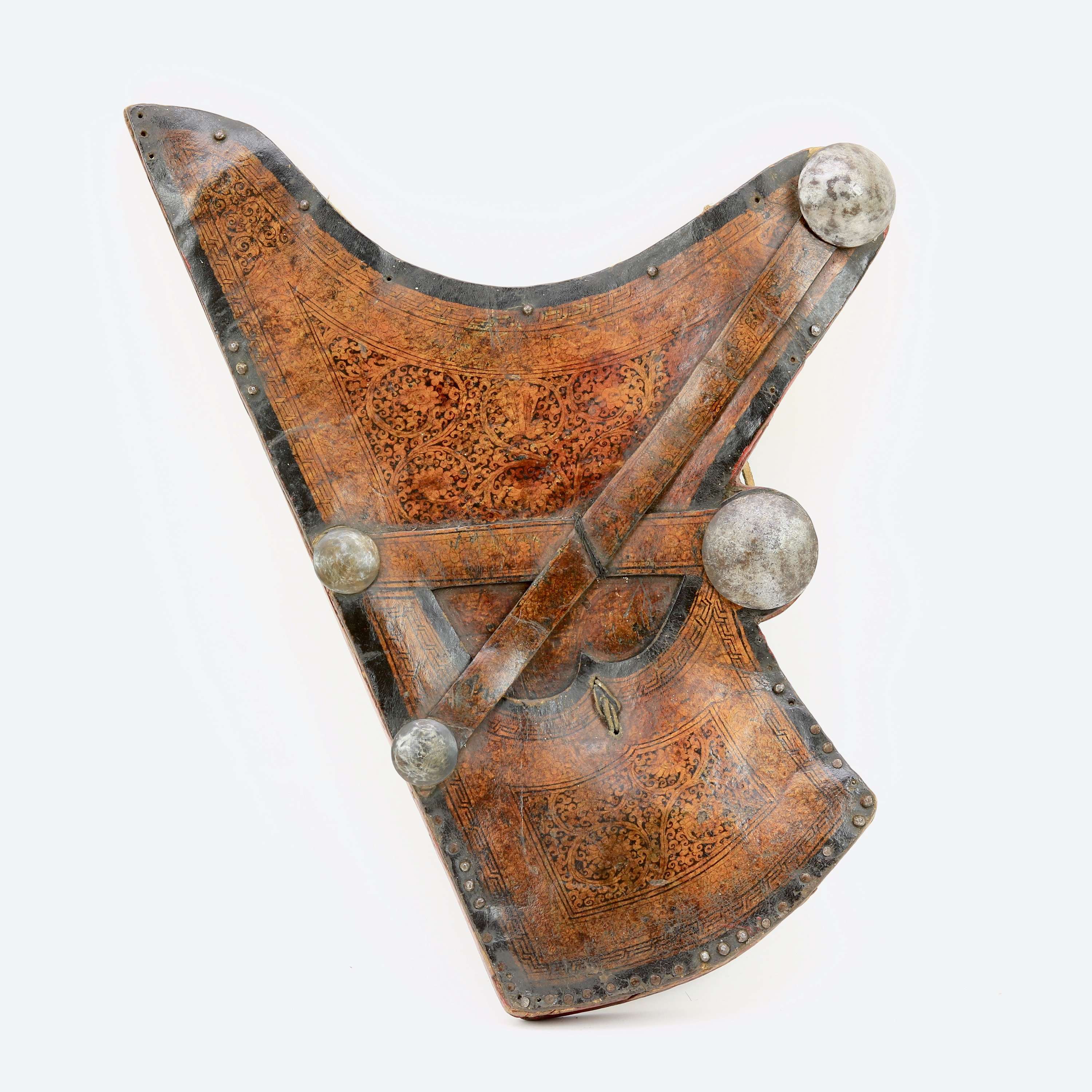 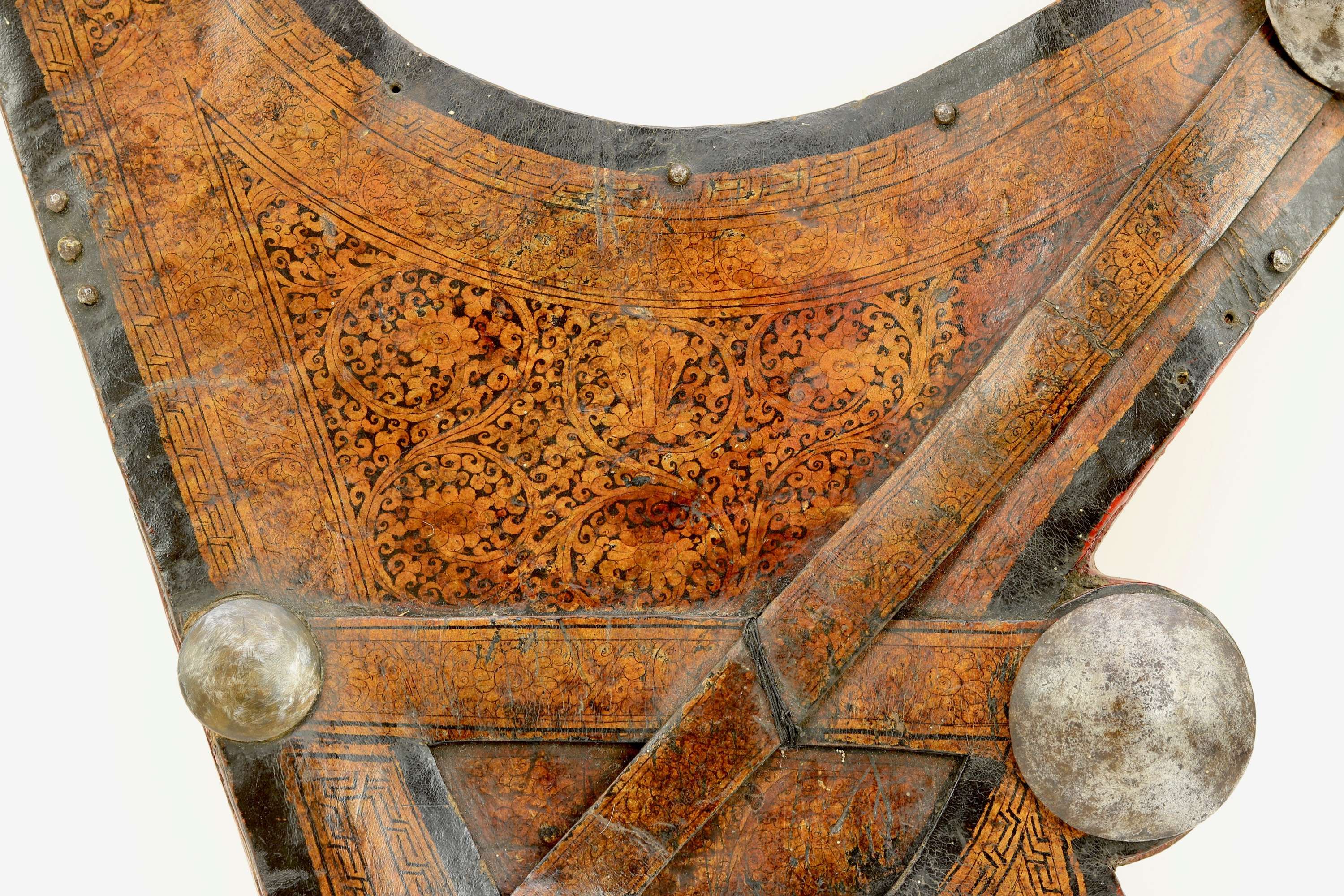 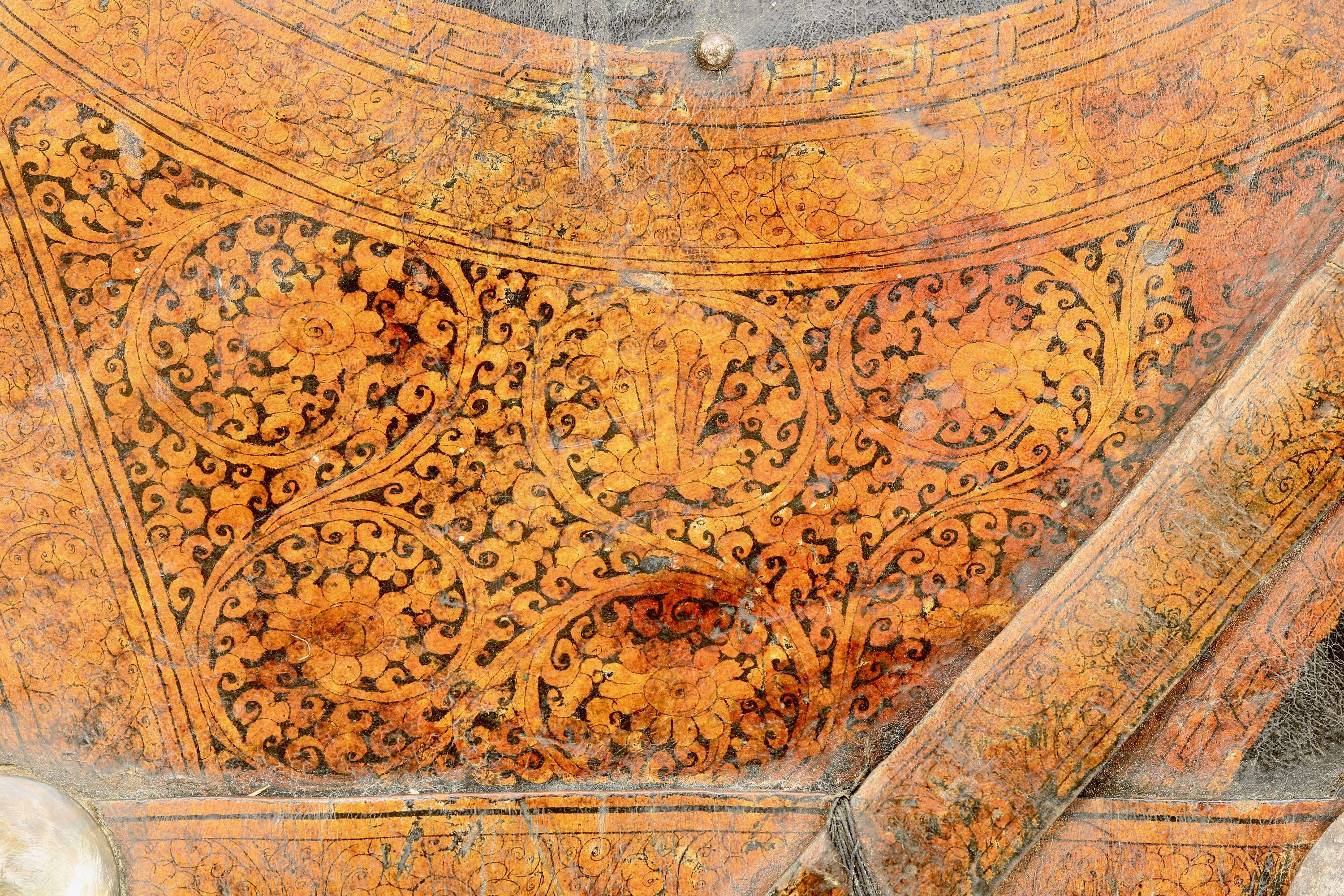 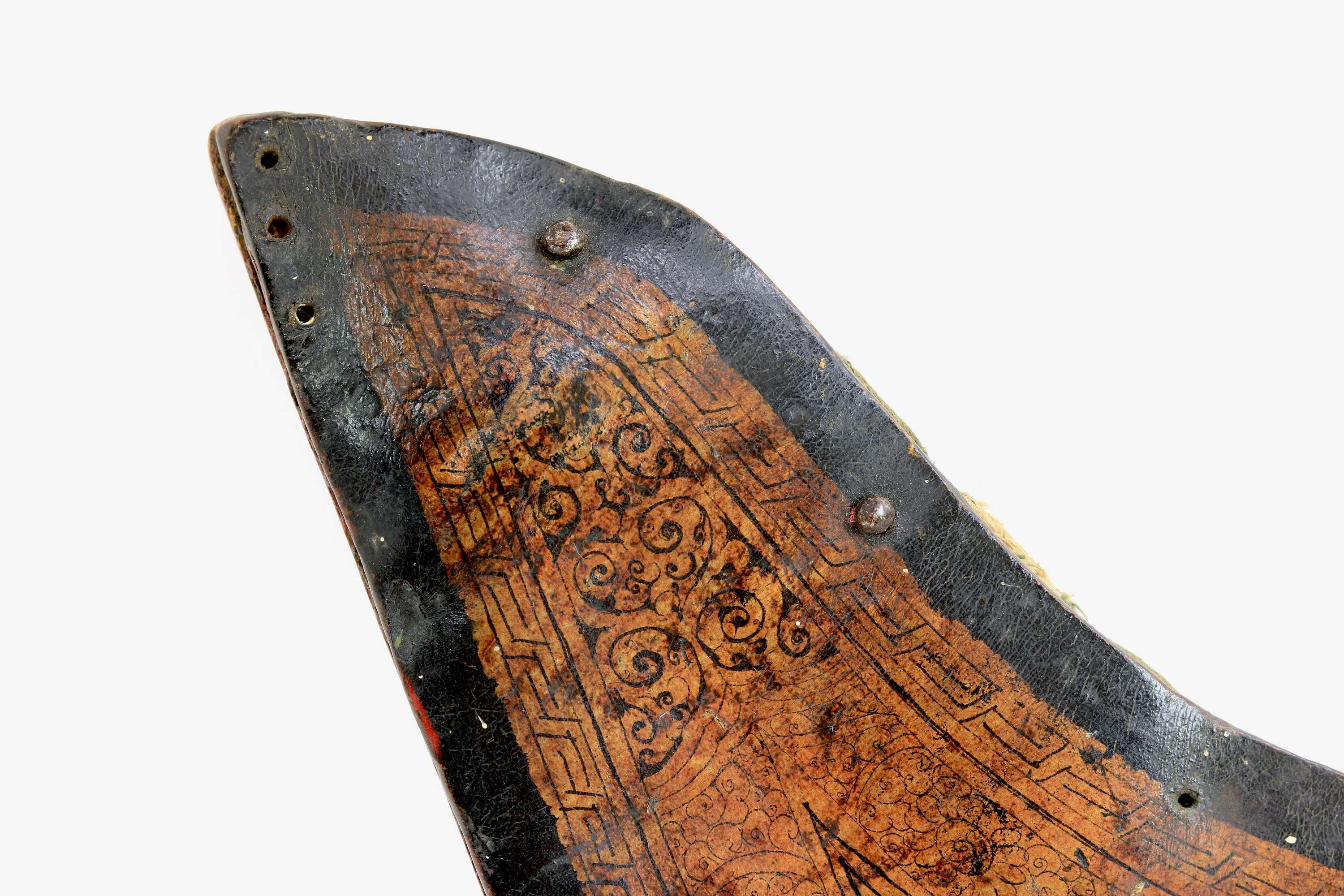 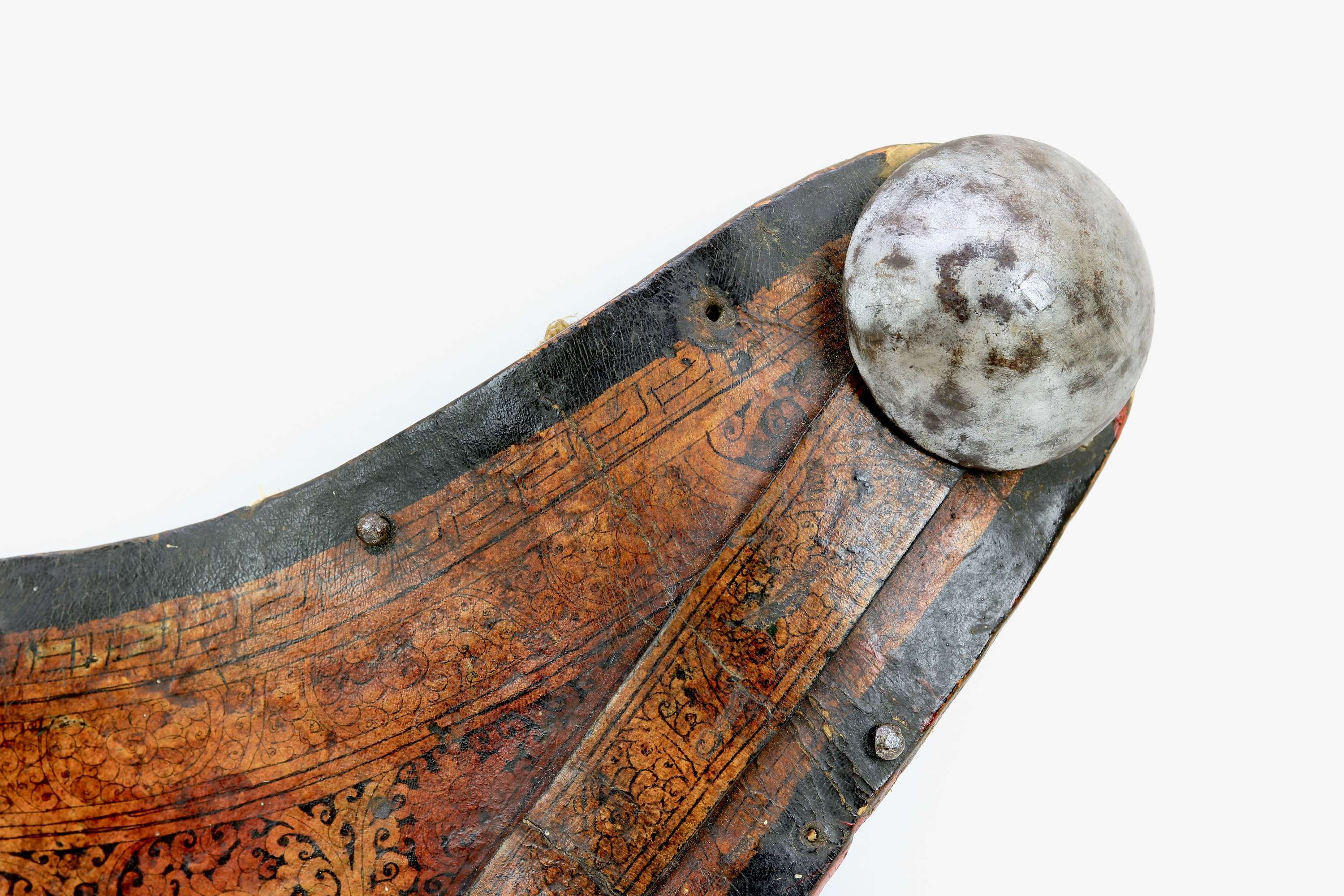 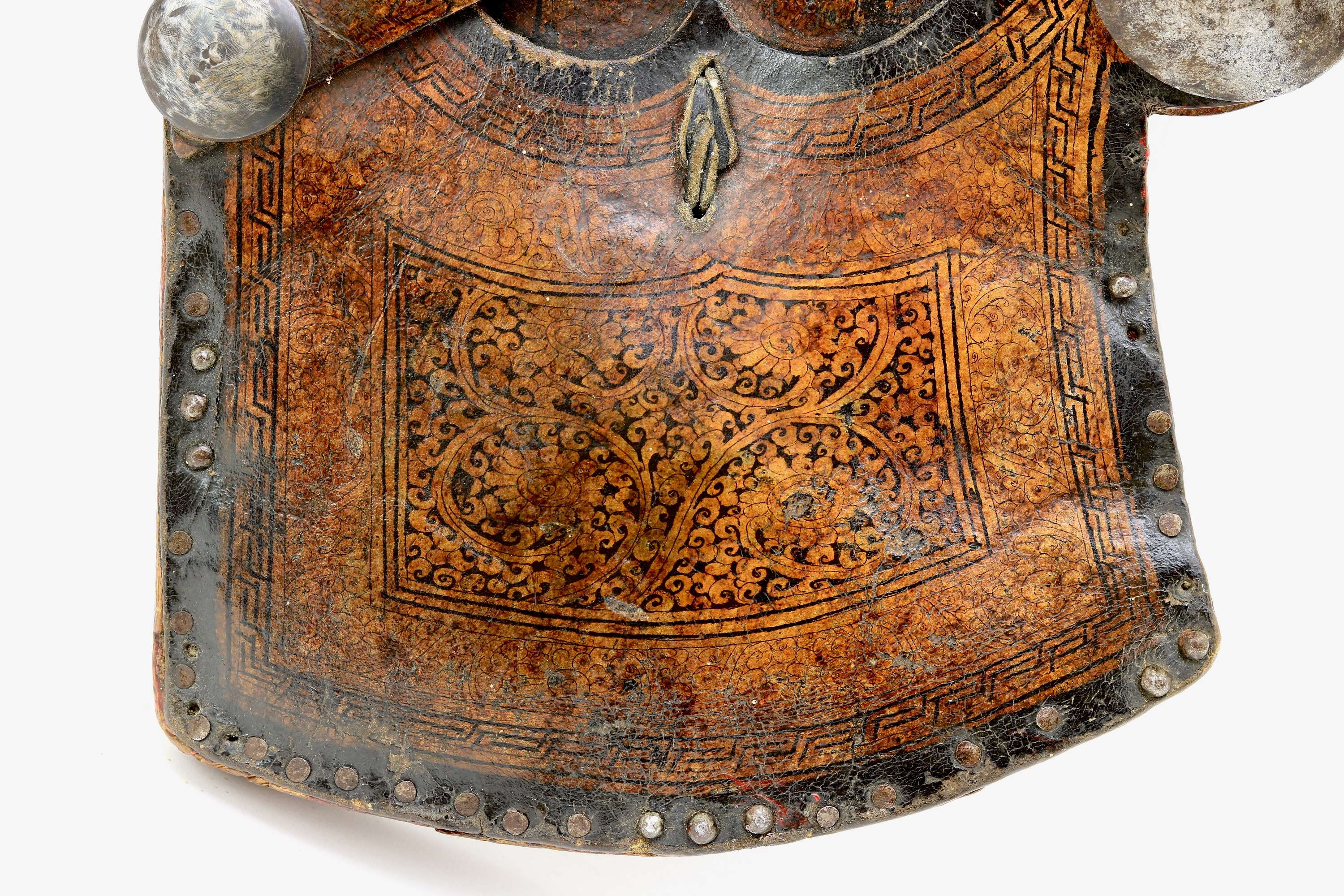 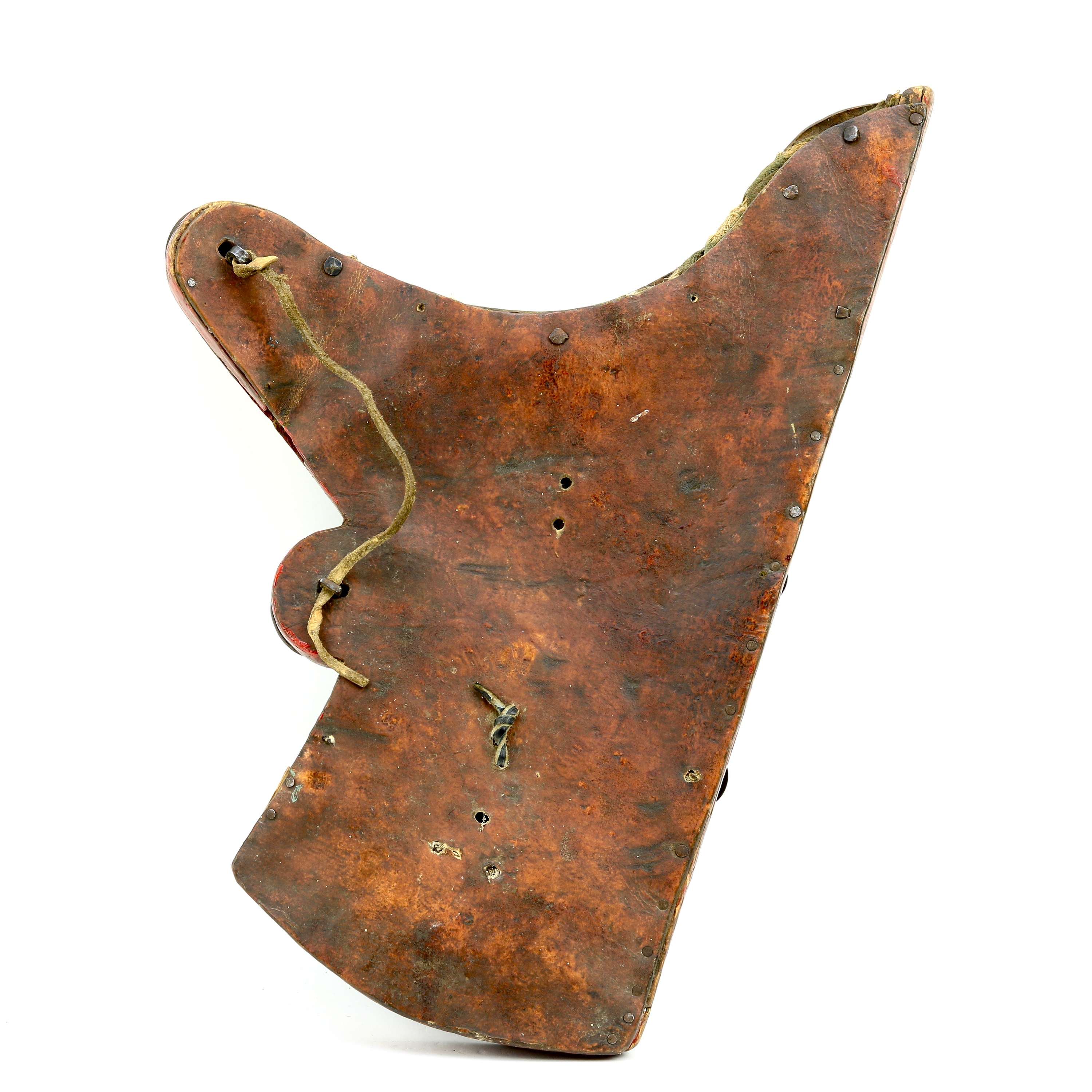 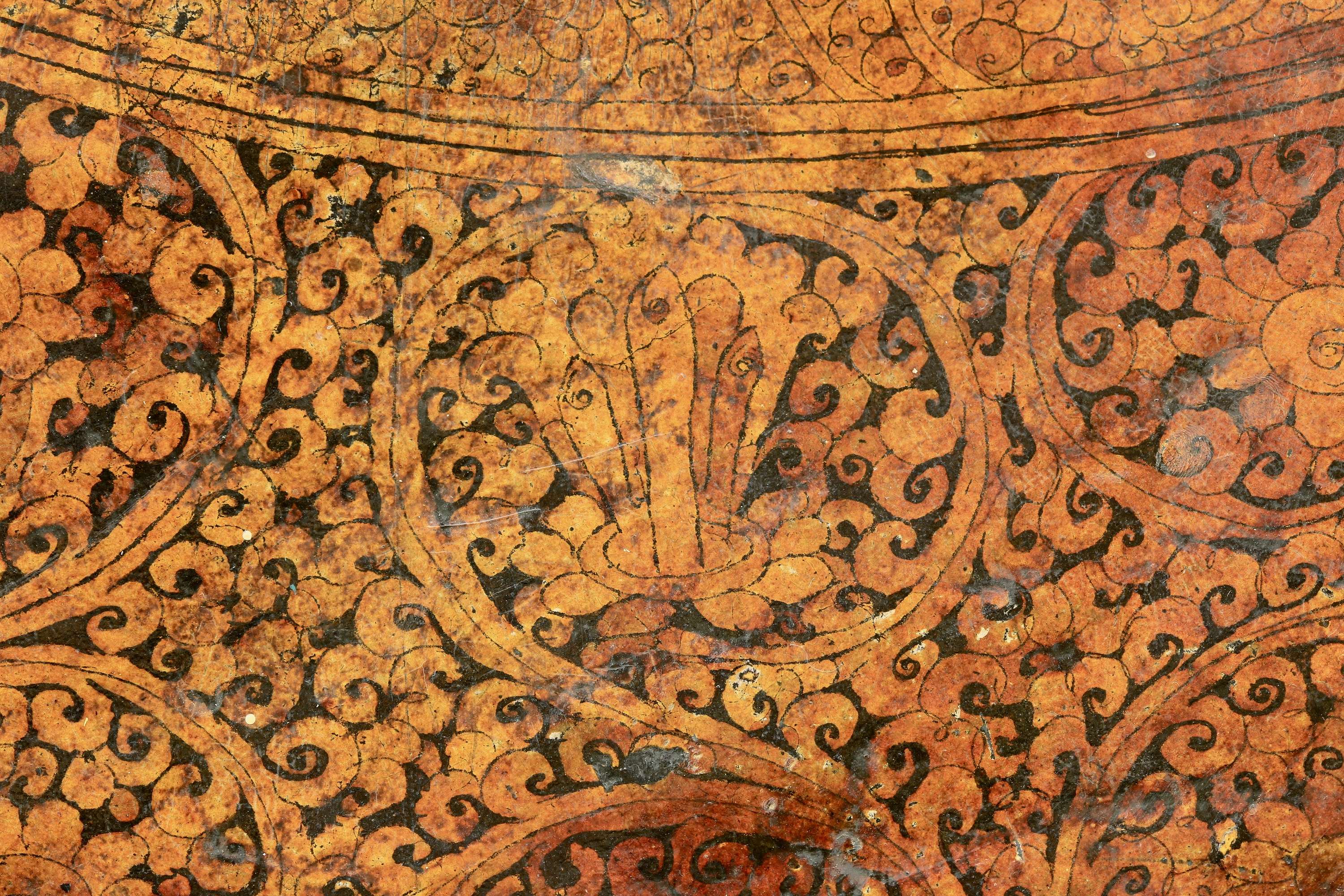 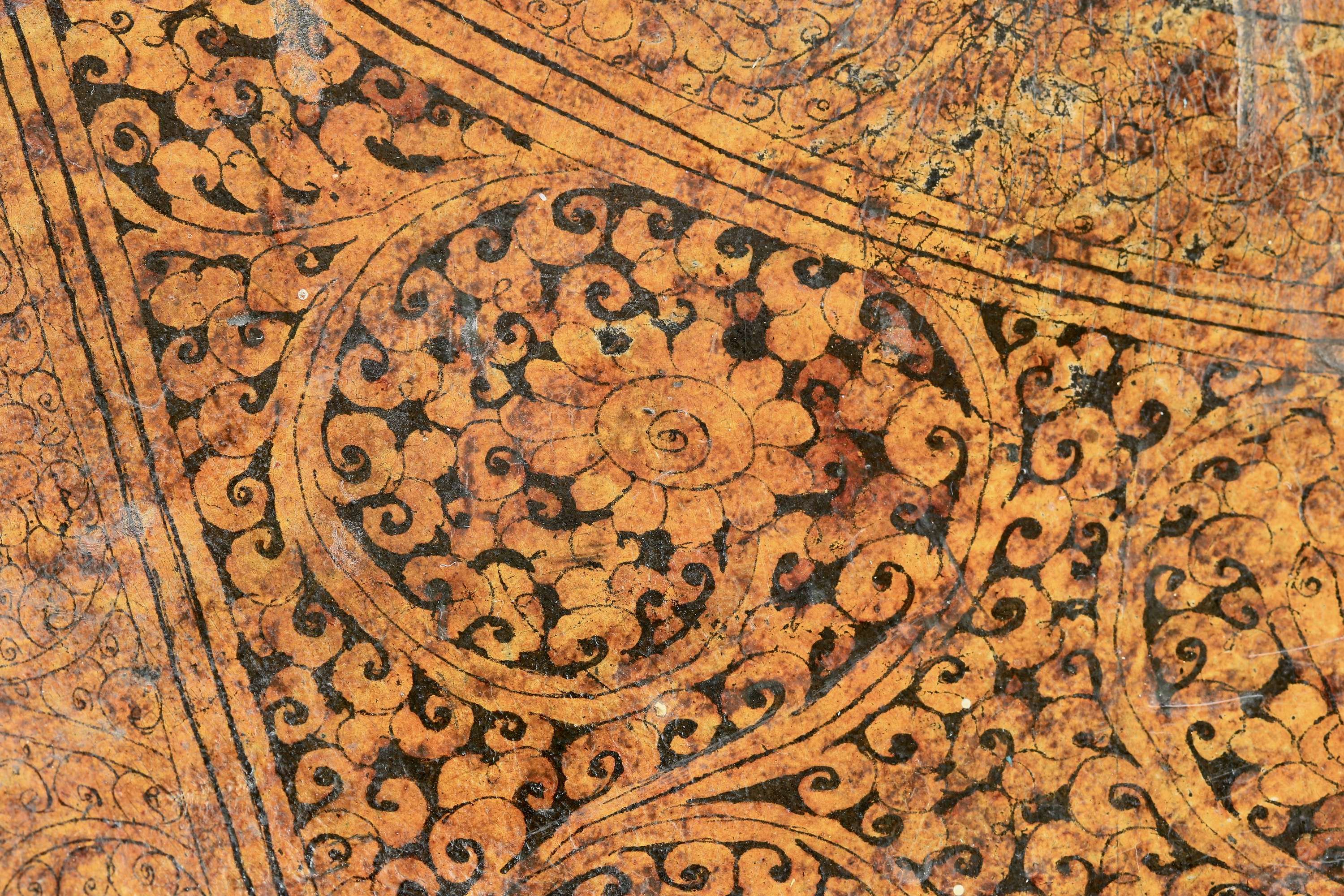 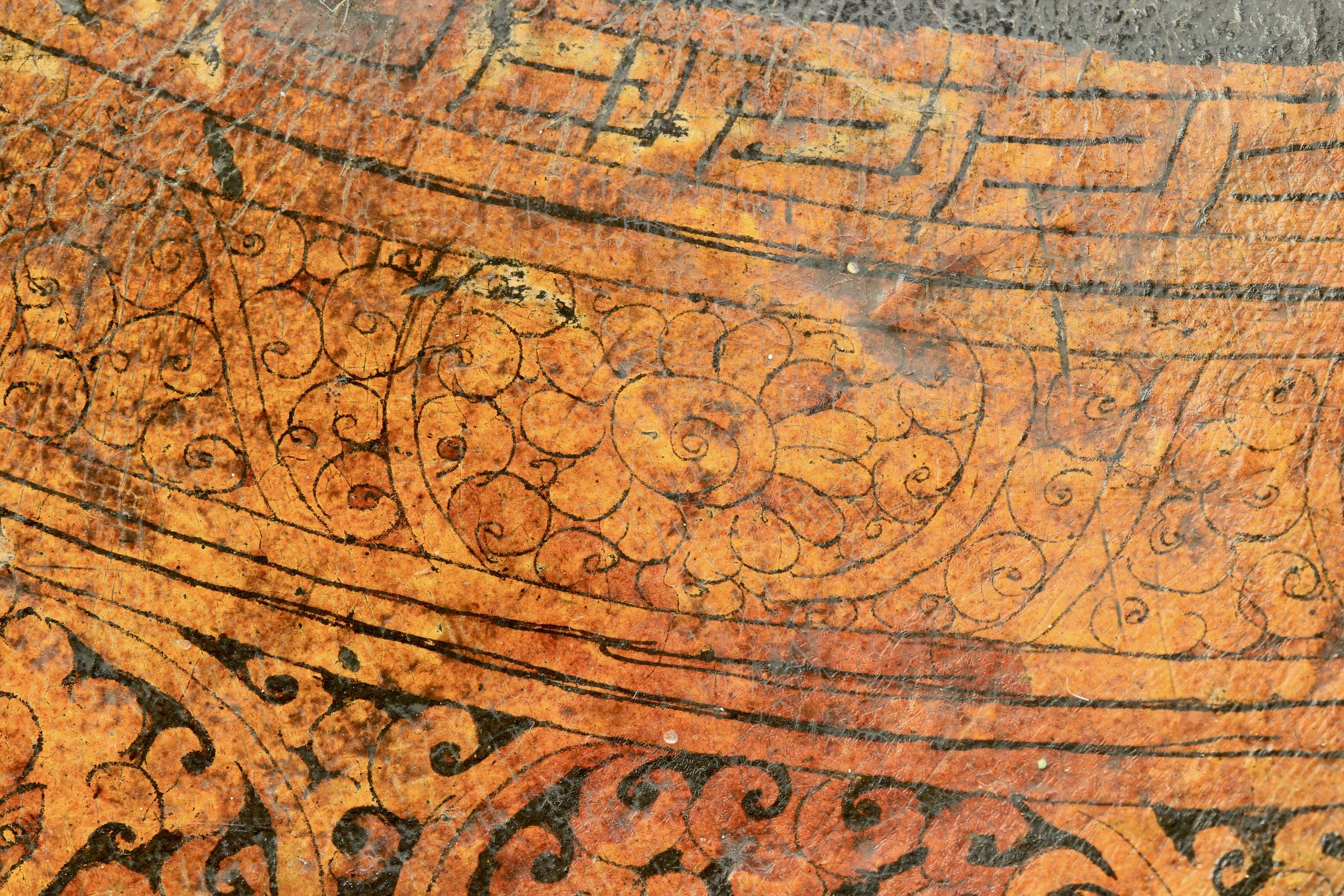 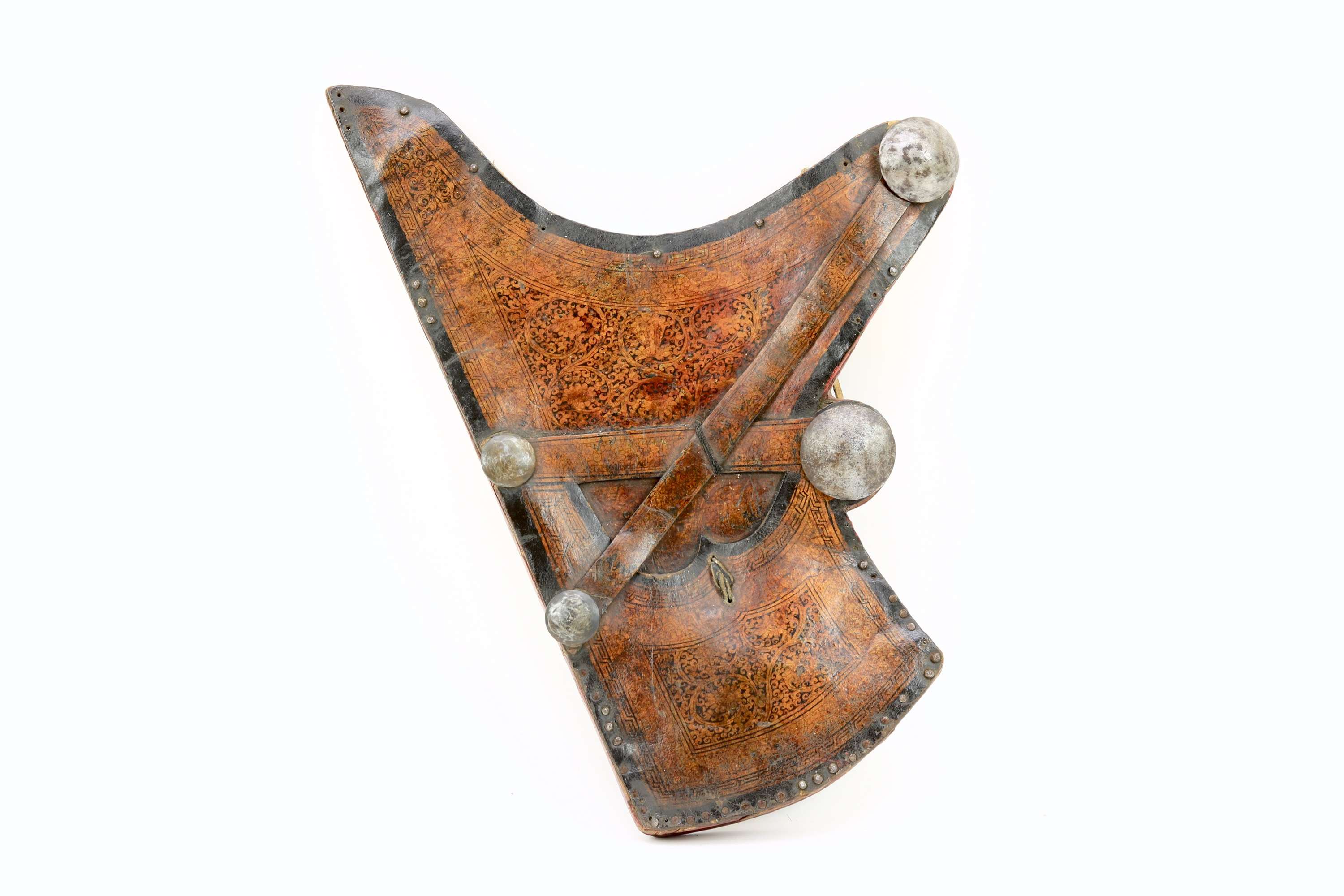