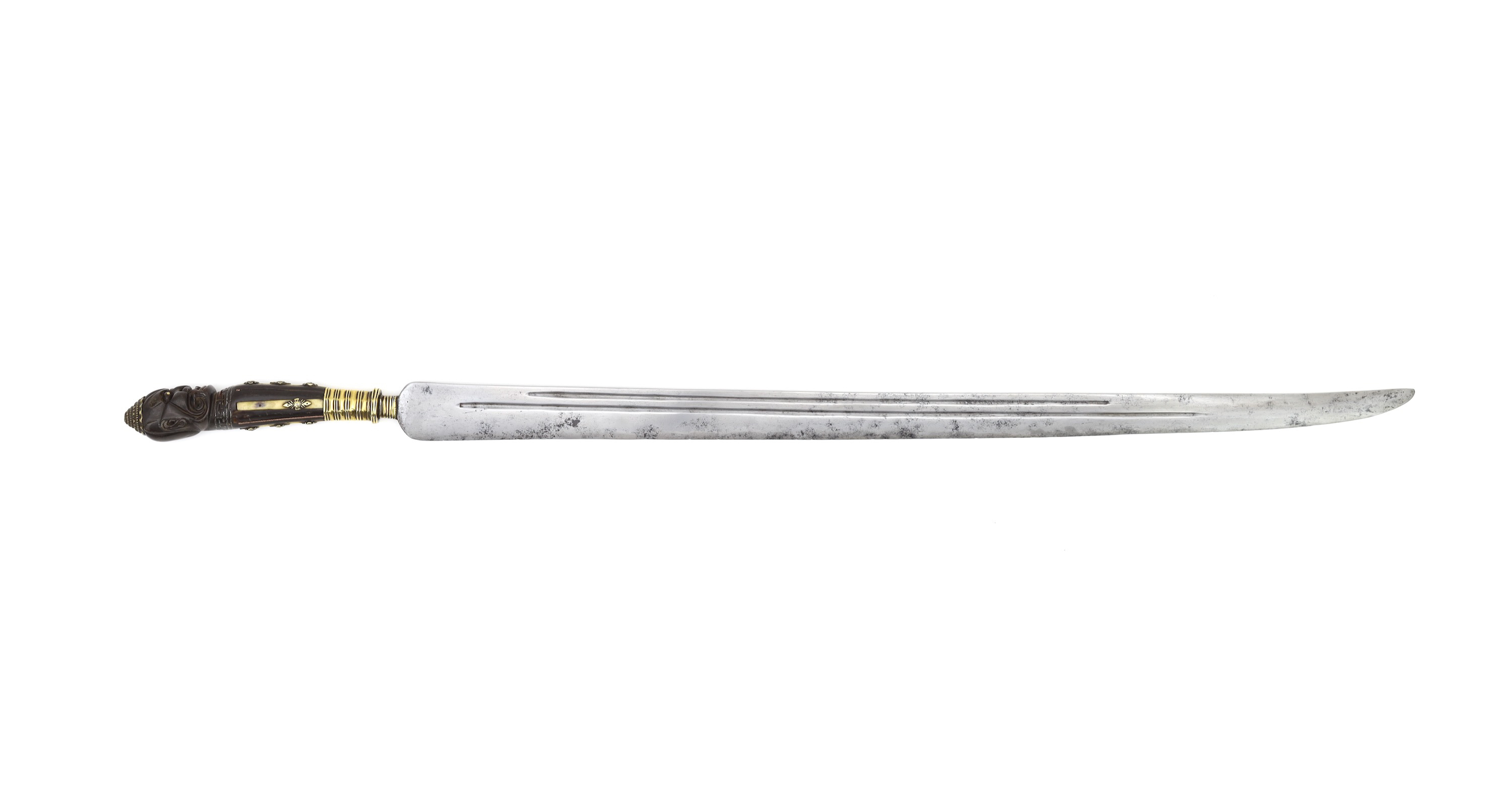 From a Scandinavian art dealer

This unusual sword is built around a relatively standard pattern, Southern Chinese military saber blade. It has two grooves of equal width, positioned in a staggered way from the base, the top groove terminating to make way for a back bevel. The blade is mostly straight, sweeping up gently towards the tip. This overall shape is reminiscent of Ming dynasty saber design, often seen in later Southern Chinese blades that remained more conservative in form for much of the Qing dynasty.

The blade is not in full polish but in current condition already shows its straight wood grain pattern, inserted high carbon edge plate, and rather interesting cloudy effects of the differential heat treatment. One normally finds these saber blades in standard pattern Qing military mounts, usually made of brass.

This blade differs from the norm in that the base is rounded at the “shoulders”, probably an after-market treatment. 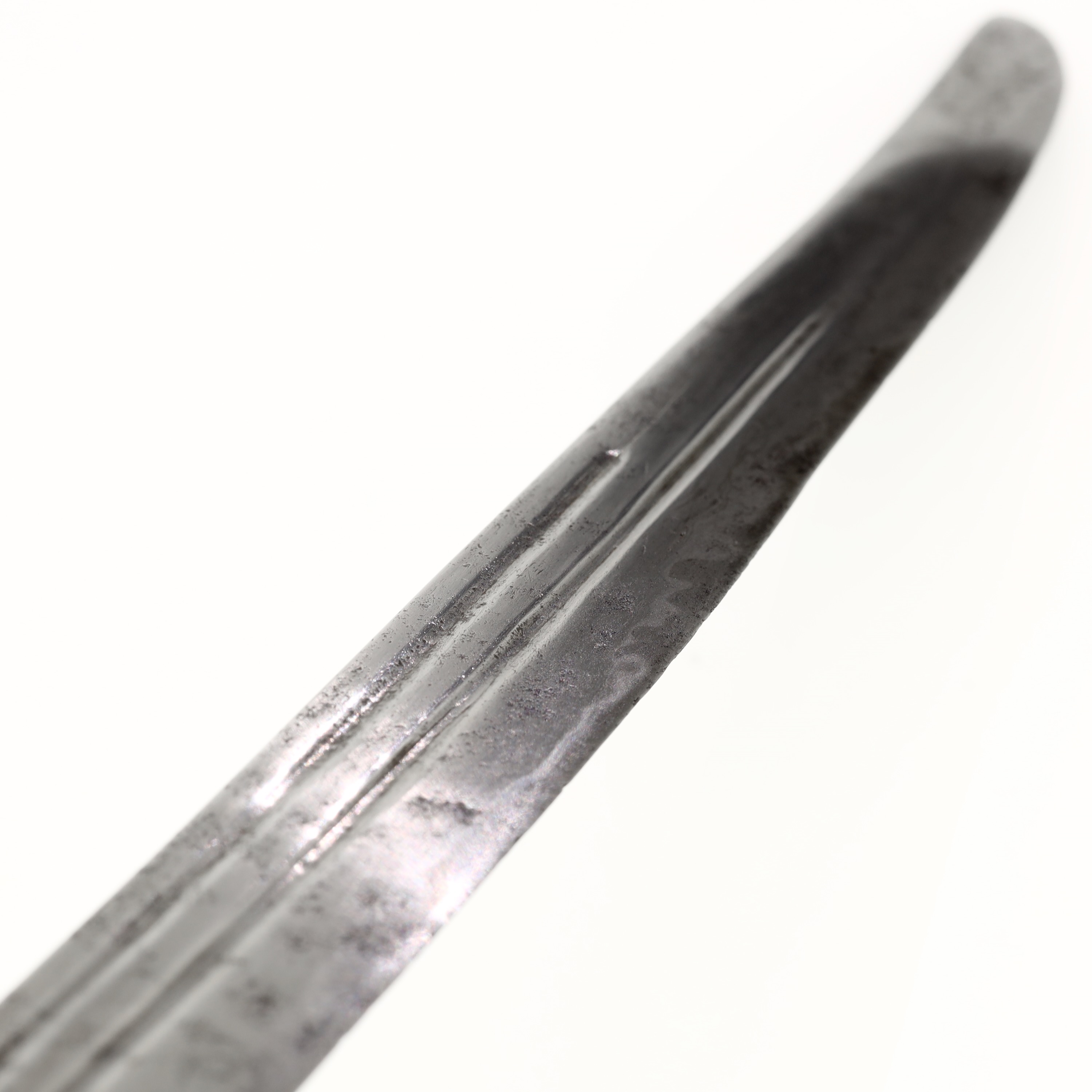 Considering the wilder heat treatment on this piece, it may be advisable to have it polished by Philip Tom.

The hilt is most unusual. Made of buffalo horn, carved in the shape of an armless humanoid figure with a demonic face with fangs. Further embellishment on the hilt includes a stylized thunder border, also known as “greek key” pattern, carved out in much the same way as seen on Chinese húdiédāo hilts, but with the difference that the cavities are filled with some filler with silver particles in it. I have never seen this before.

The bottom of the hilt consists of a long brass ferrule with an integrated guard. Octagonal in cross-section and with faceted “ribs” this work reminds strongly of the work seen on the ferrules of both Northern Vietnamese and Southern Chinese fighting knives. The small guard is something I would associate mainly with Yunnan, Guangxi, and northern Vietnam. The tang end is peened over a stack of washers on the top of the head.

All in all a very interesting mix of styles, very nicely executed. The style appears somewhat tribal, but the finish is much better than normally produced by tribal societies in that area, which suggests it was probably made in a more metropolitan (port?) town where all the mentioned influences came together.

The blade shows signs of use and (re)sharpening, indicating active service. Whatever it was, it was not merely a showpiece. 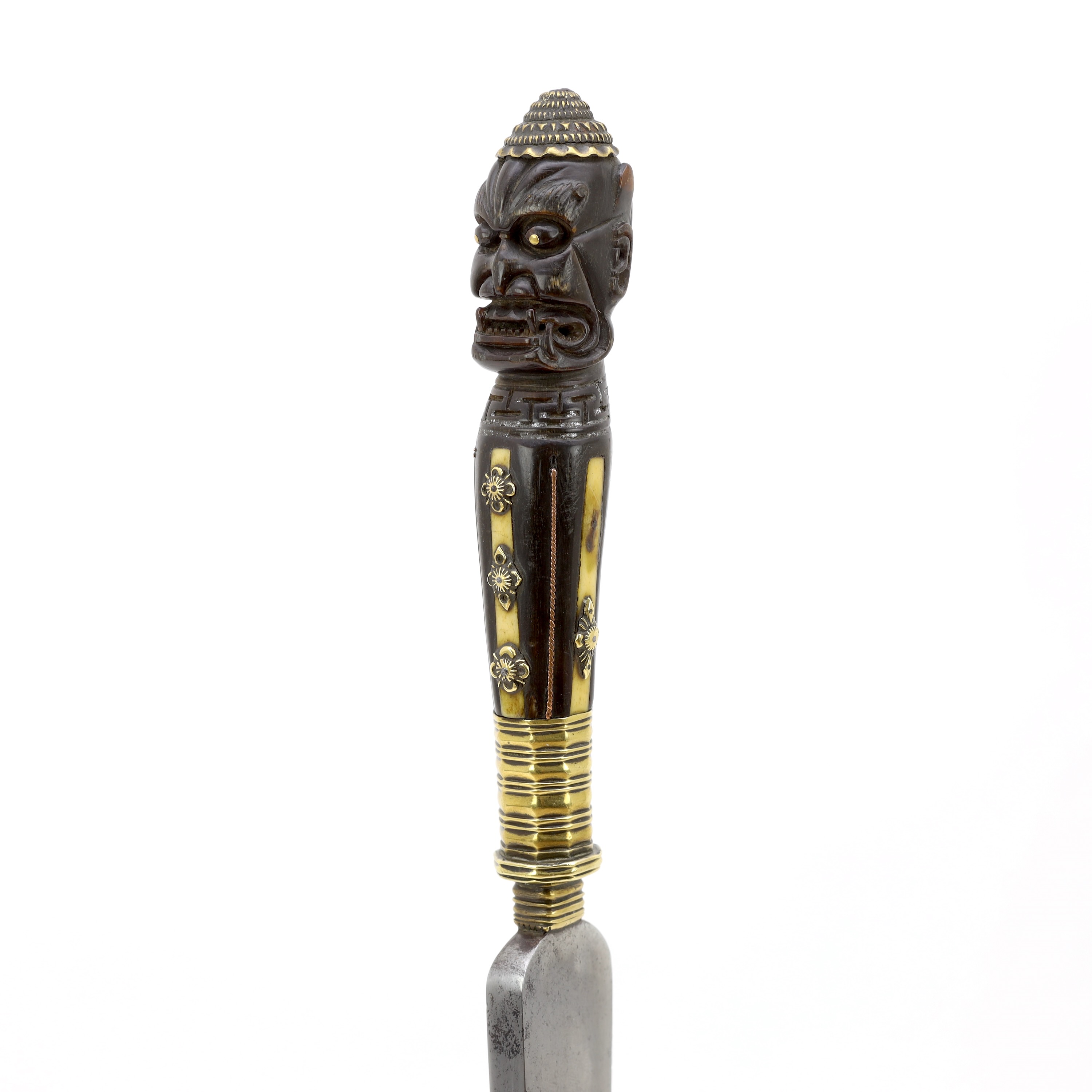 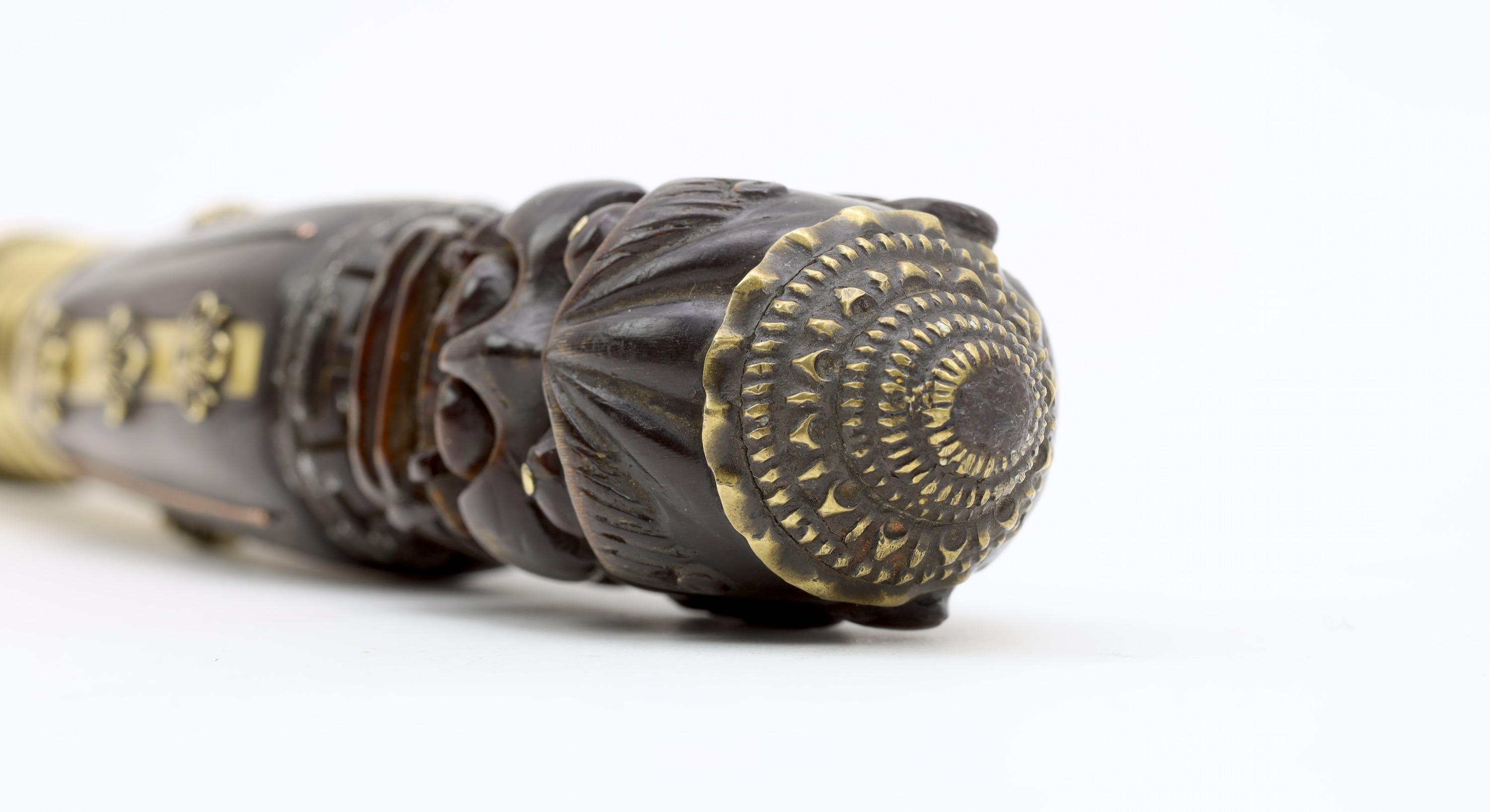 Stack of washers atop the peened hilt.

Which specific culture produced it remains somewhat of a mystery, but I would put it in the general area of Yunnan, northern Vietnam, and southern Guangxi provinces. Circa 1850s.

It is possible that the owner was military and was issued this blade but had it hilted in a local fashion. Minority people in the area had great freedom in the choice of their equipment and were for example also allowed to use their native crossbows rather than the standard Qing composite bows.

Comes without a scabbard, but with an upright stand for display. 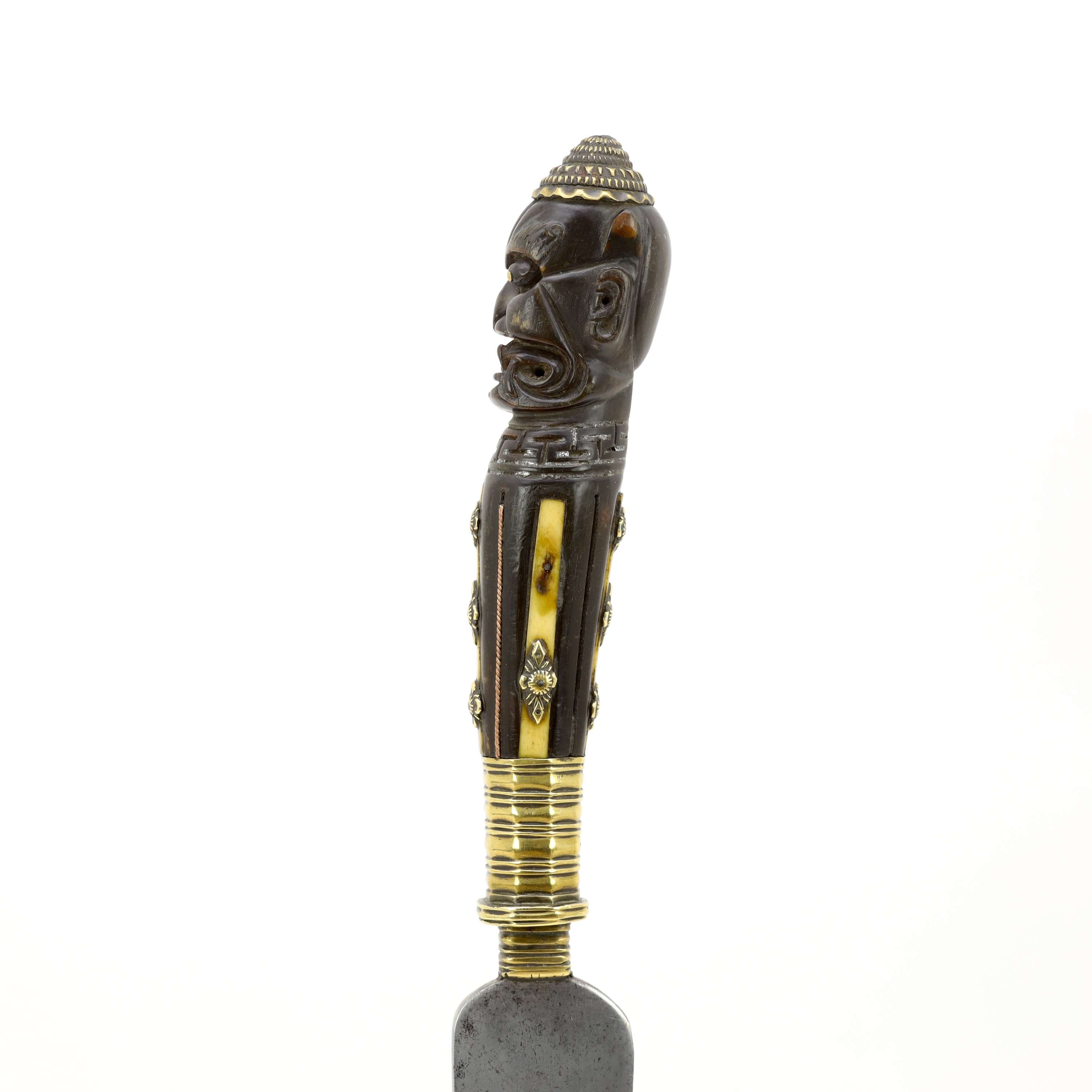 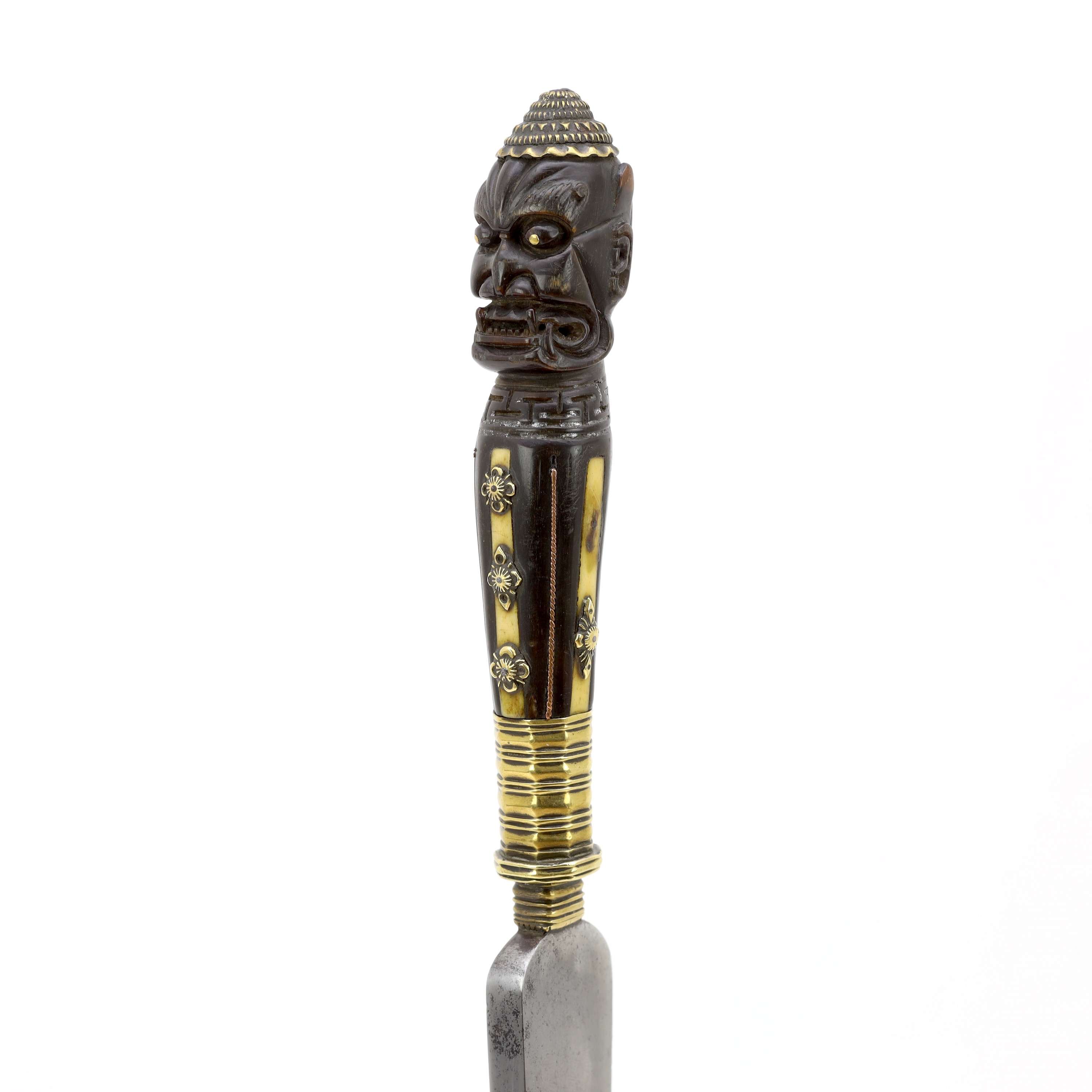 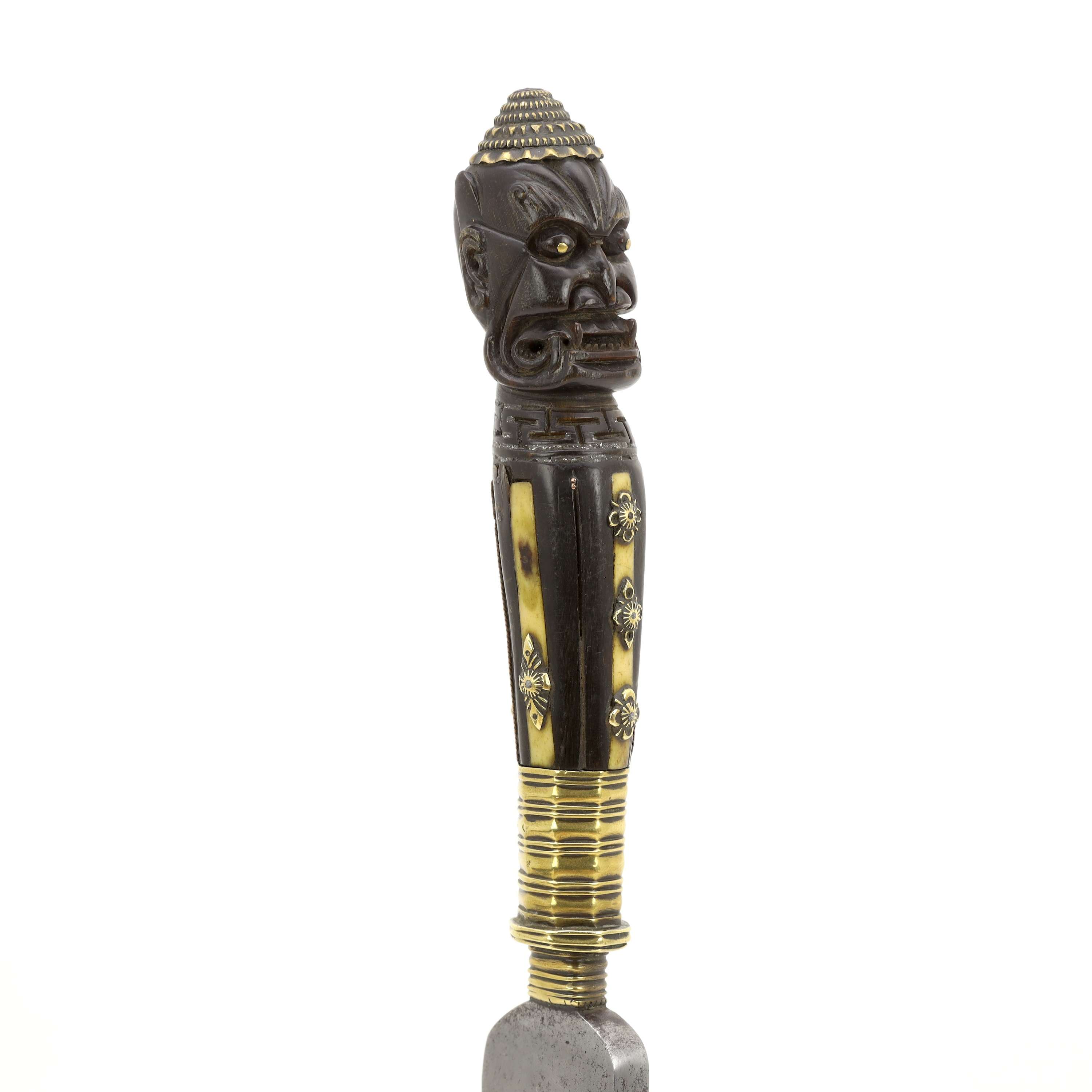