The Manchus were the ruling elite of China from 1644-1912. Manchu men were all born under one of the Eight Banners, which were military and administrative divisions. They enjoyed various privileges such as monthly pay in silver, rice stipends, land grants, and exclusion from torture when committed a crime.

They ate the emperor's rice, and in return, they served him with their life: They could only work as a warrior or state official under one of the Eight Banners making them effectively a warrior caste, much like the samurai of Japan.

Despite their highly martial culture, most of their weapons remained unmarked and today it is hard to find an antique weapon of the Qing of which we can say with certainty that it belonged to a Manchu. Here is a rare exception, an early Qing saber with a Manchu mark.

Blade
A massive 17th-century saber blade of the rarer early yanmaodao type. The blade has two narrow grooves on each side and a very well-defined bevel that leads to its double-edged tip. It is thick and narrow up to the center of percussion where it dramatically widens through a raised backedge. It is the largest yanmaodao I’ve seen to date, and was clearly a cavalryman’s piece and balanced as such.

The steel is a fine forge folded construction with inserted high-carbon edge plate exposed from the edge. It has undergone a differential heat treatment resulting in a series of cloudy crystalline patches of martensite, like the hamon on Japanese swords.

The blade is in remarkable condition for its age, with intact contours and bevels and only two minor nicks from edge-to-edge contact in a distant past. The blade was polished 30 years ago by a Japanese sword polisher in the classic sashikomi style polish.

Significance of the markings
We find the word kanahan in the Tongwen Guanghui Quanshu (同文廣彚全書) or "Enlarged and complete dictionary", a Qing imperial dictionary in Chinese and Manchu of 1702, of which each entry was double-checked and approved by the Kangxi emperor himself: 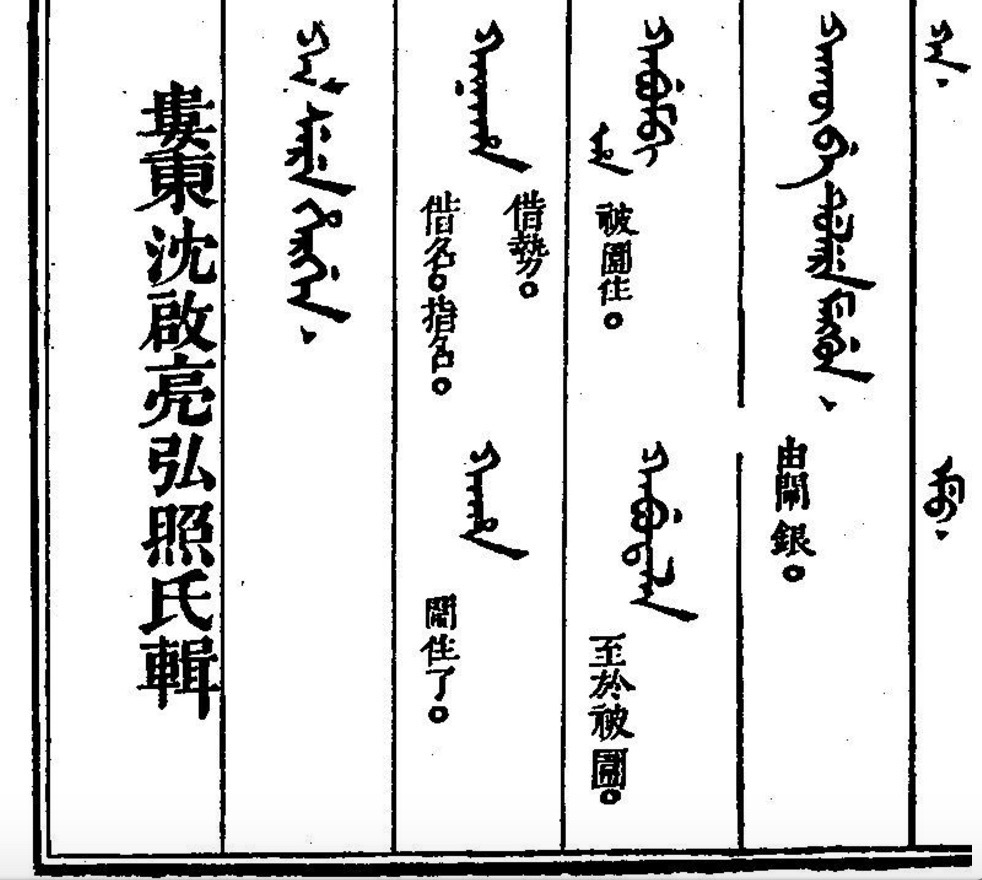 Kanahan as it appears in the Tongwen Guanghui Quanshu of 1702.

Alternatively, it can be translated as to borrow, or pretense, neither seem to make any sense. Per my current knowledge, the word kanahan does not appear in any later dictionaries.

On the Chinese marking, the word for “guo” is a shorthand that resembles the modern character but then without the dot next to the 王. I found this character in the Kangxi dictionary of 1716, it seemed to have fallen out of use after the Kangxi reign. 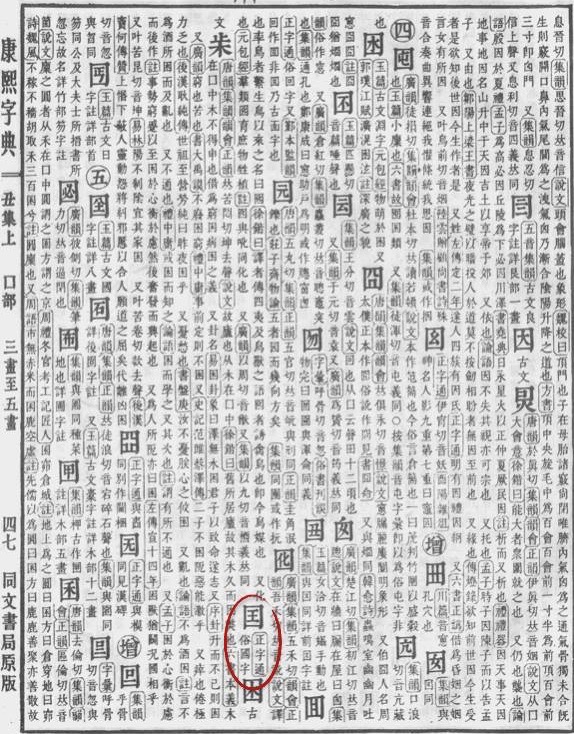 The rare shorthand for 國 in the Kangxi dictionary of 1716.

The format is that of a typical Qing military marking, but military marks typically start with a city or province. Like a southern paidao I have with a “Guang series” (廣字) marking that probably refers to the province of Guangdong or the city of Guangzhou. In this instance, the "Country series" (國字) probably refer to the main imperial forces from the capital Eight Banners.

Looking at the markings it is also interesting to see how coarse the Chinese characters are, while the Manchu is nicer. This may reflect a time when bannermen were probably still better much versed in Manchu than Chinese, something that was about to change drastically over the course of the next century.

Finally, the marking on the tang. The tang is a curious place for a marking on a Chinese sword because the handles were customarily peened and not easy to disassemble like the Japanese sword is. As a result, we rarely encounter any markings on Chinese tangs. When we do, they are usually

The marking on the tang is very curious. Markings on Chinese tangs are very rare because the Chinese way of mounting a Chinese sword involves peening it at the pommel so it cannot be readily disassembled. Most sword owners, therefore, would never get to see the tang of their sword. If we encounter a marking on a Chinese sword tang at all it was probably meant for the people in the workshop that handled the unmounted blades. I've seen marks of quality before.

In this case the word qian (前) simply means "forward" and it is not a common character in names or quality indications. The first thing that comes to mind is the Manchu Vanguard, or qianfeng (前鋒). It is possible that the workshop was finishing a batch of sabers for this unit and had the tangs marked for that purpose.

The old blade it comes with a hilt and scabbard made by Philip Tom in 2008 using classic fangshi mounts that he designed himself. The blade was deliberately not peened as is the Chinese tradition but kept in its handle by means of a pin so the handle can be removed at any time to study the tang and appreciate the impressive blade without its mounts.

An extremely rare example of a saber that can be attributed to a Manchu Bannerman of the early decades of the Qing dynasty. It has three distinct markings that help provide context. Both the Chinese and the Manchu markings contain words that were last published under the Kangxi emperor and fell out of use soon thereafter, indicating the inscriptions are probably as old as the blade. The tang bears an interesting marking that is a possible reference of it being made for the elite Manchu Vanguard.

But even without the markings, the blade can stand on its own as an impressive example of a large and early cavalry yanmaodao with raised backedge. The geometry is precise and forging quality is excellent, with tight layering and prominent effects of heat treatment visible. 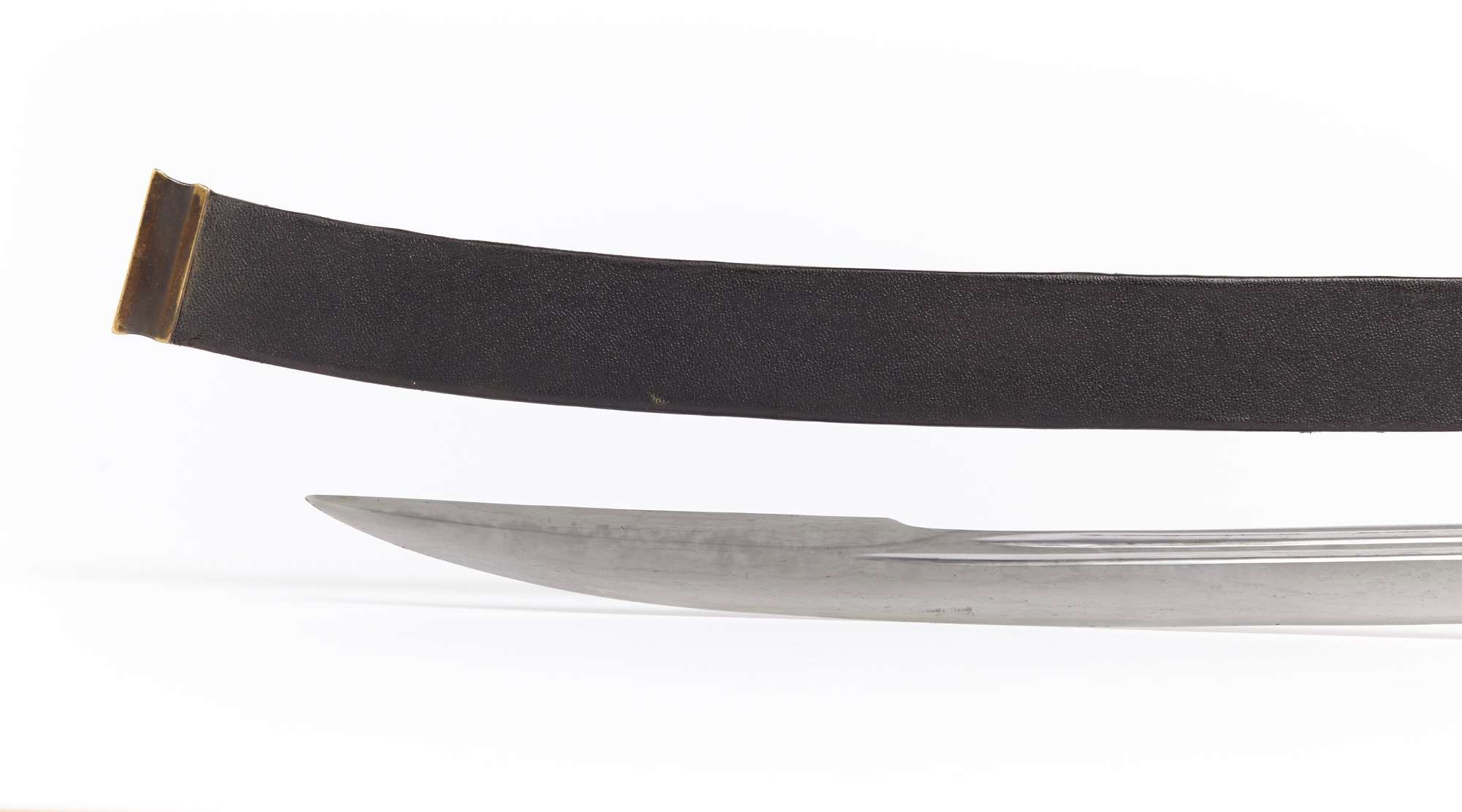 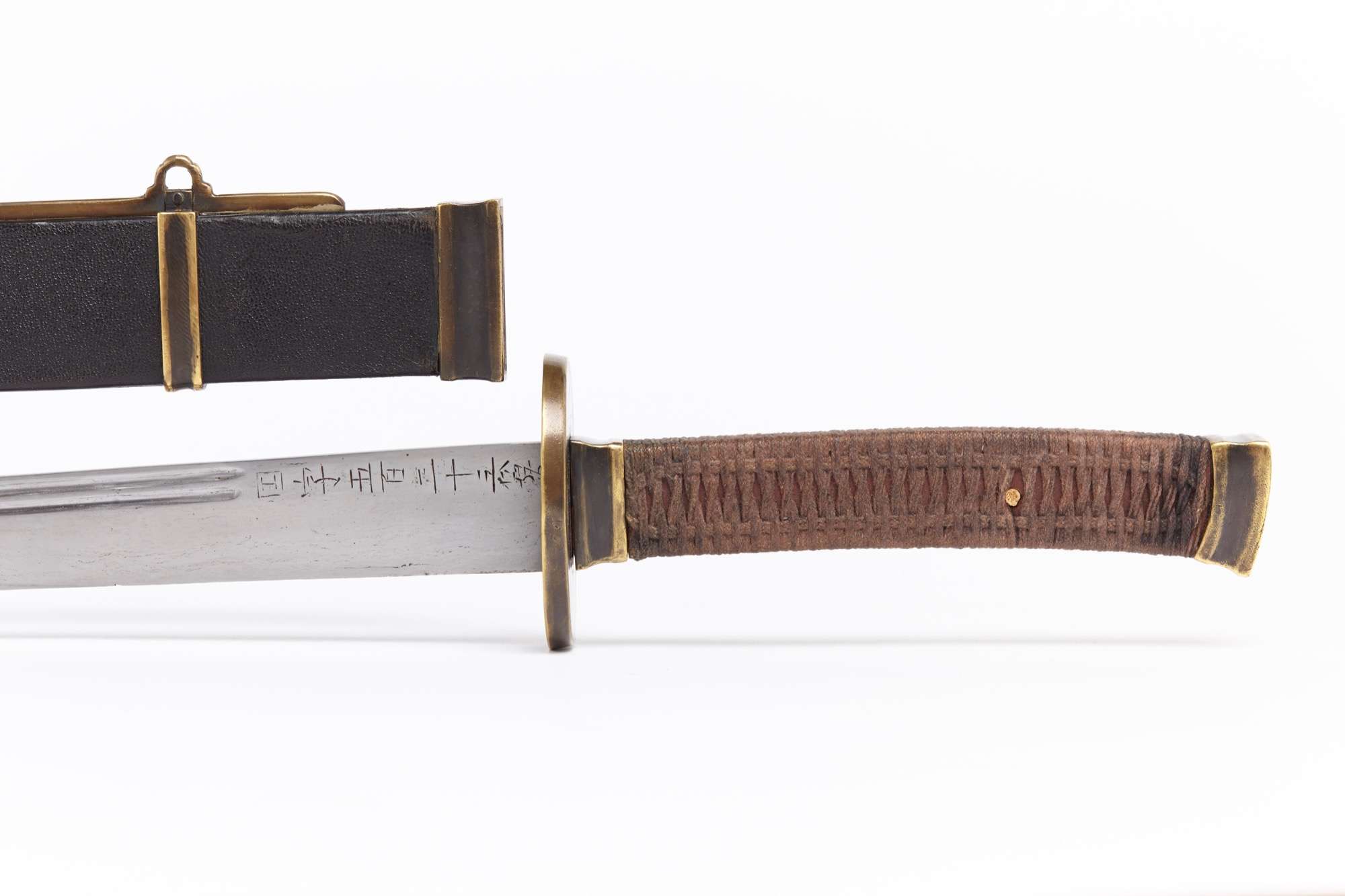 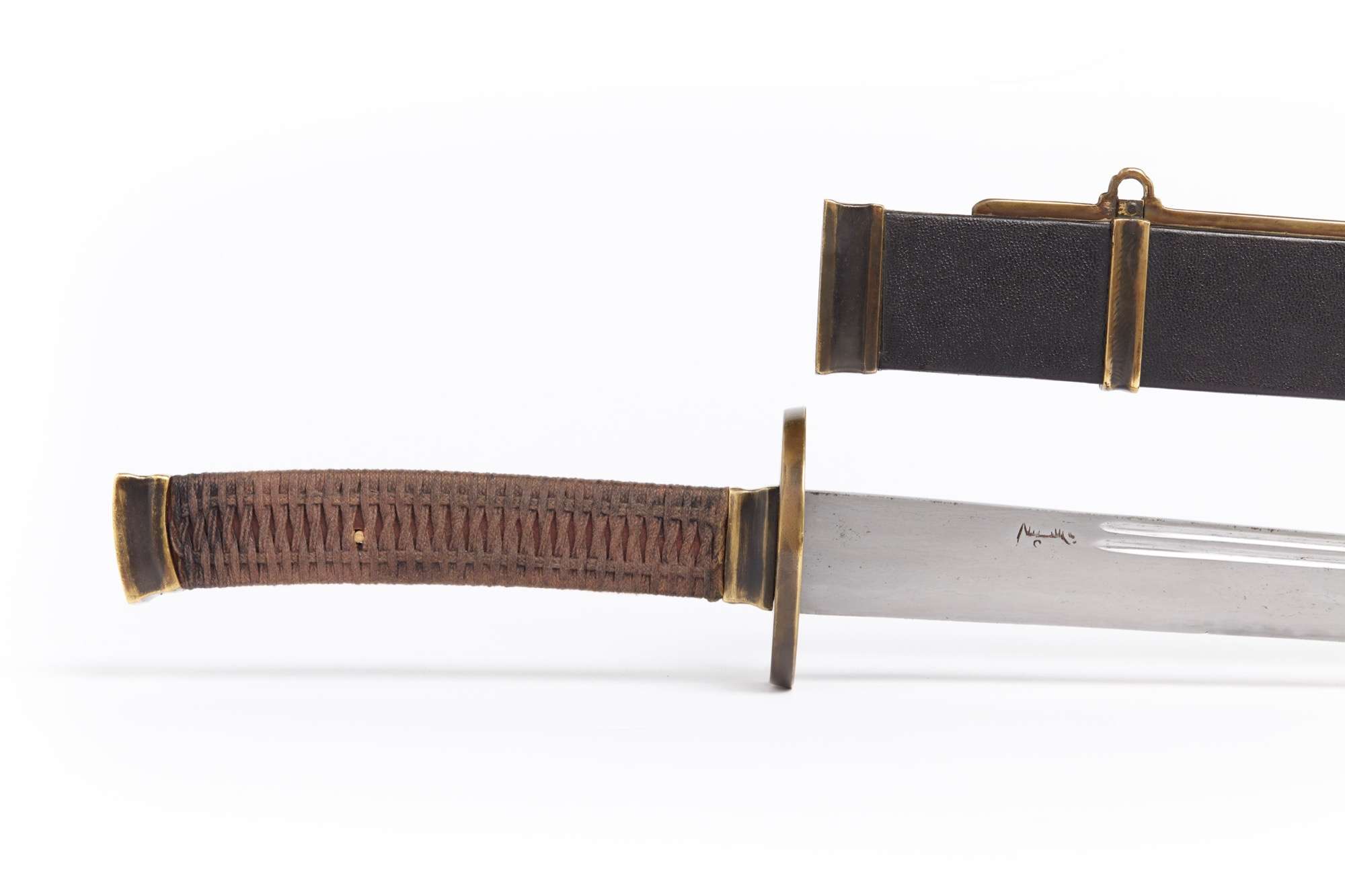 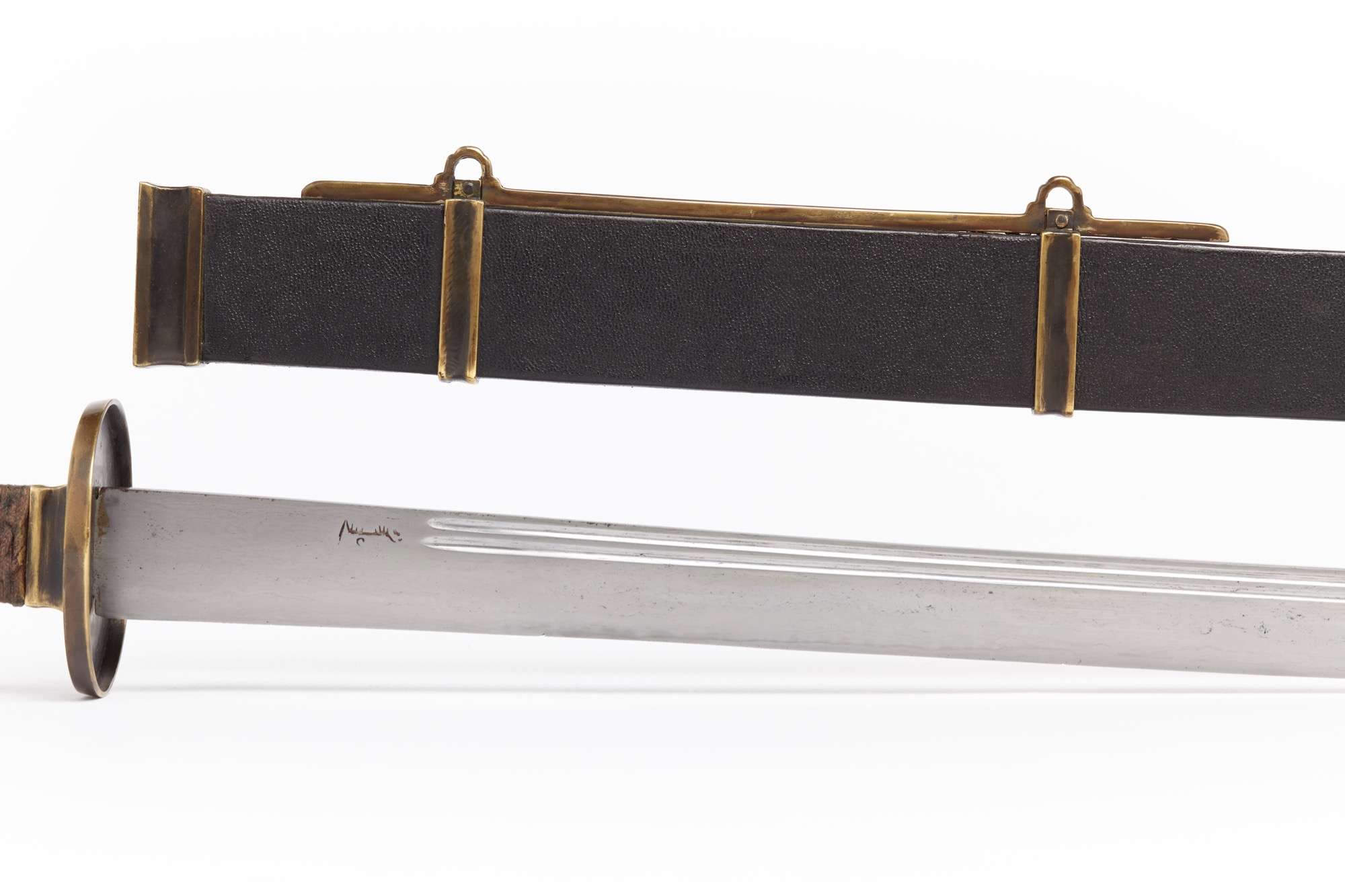 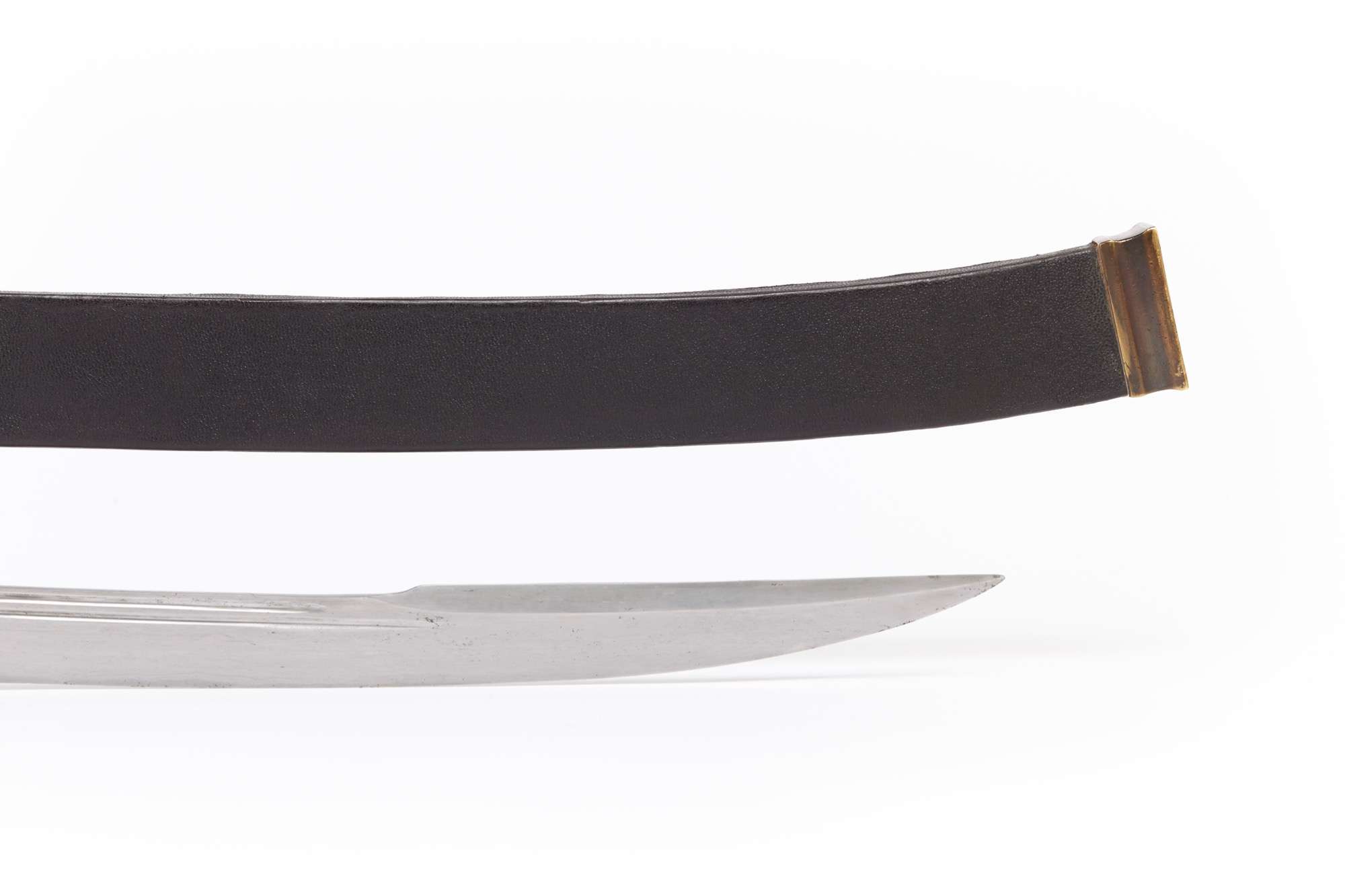 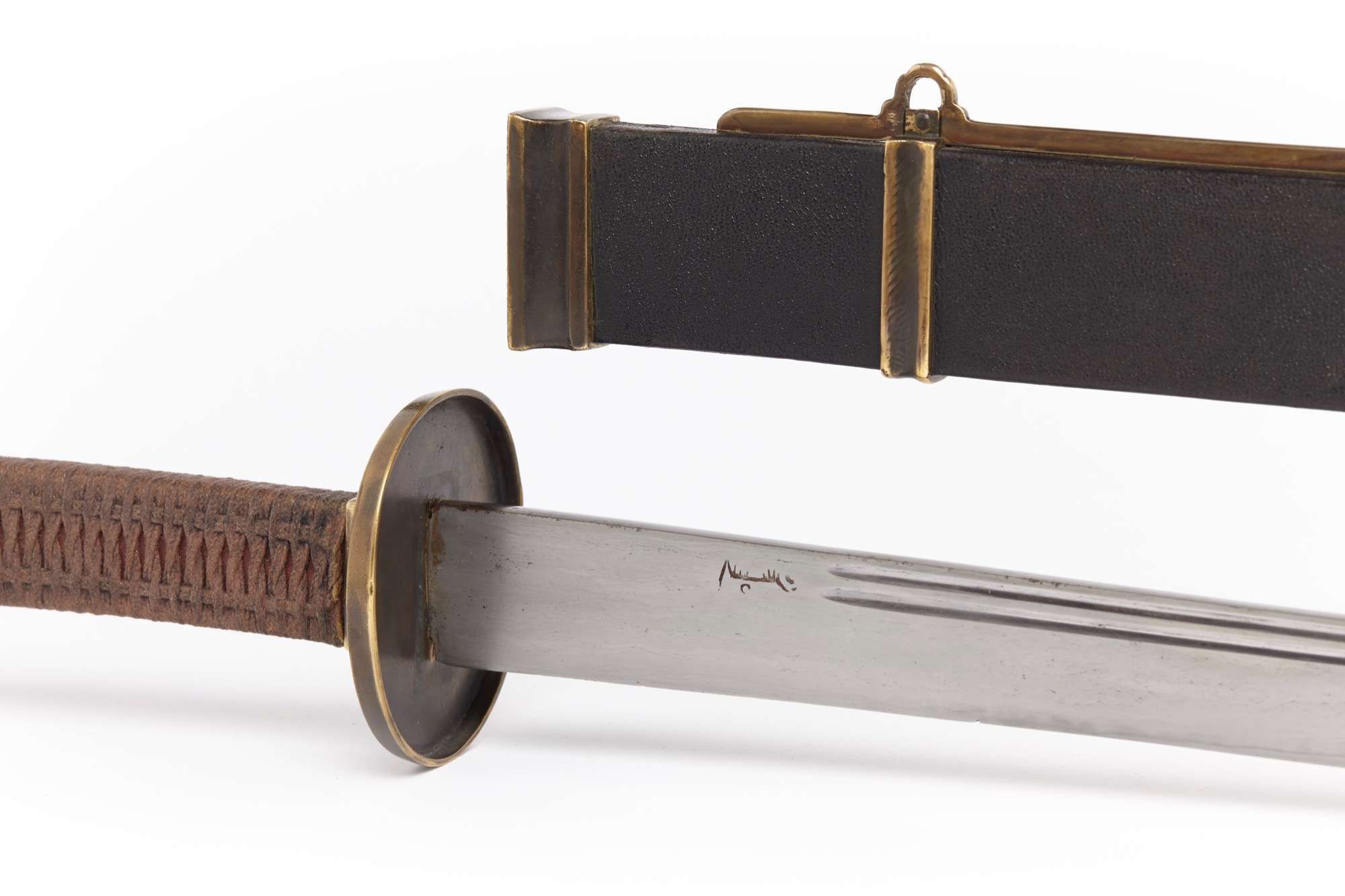 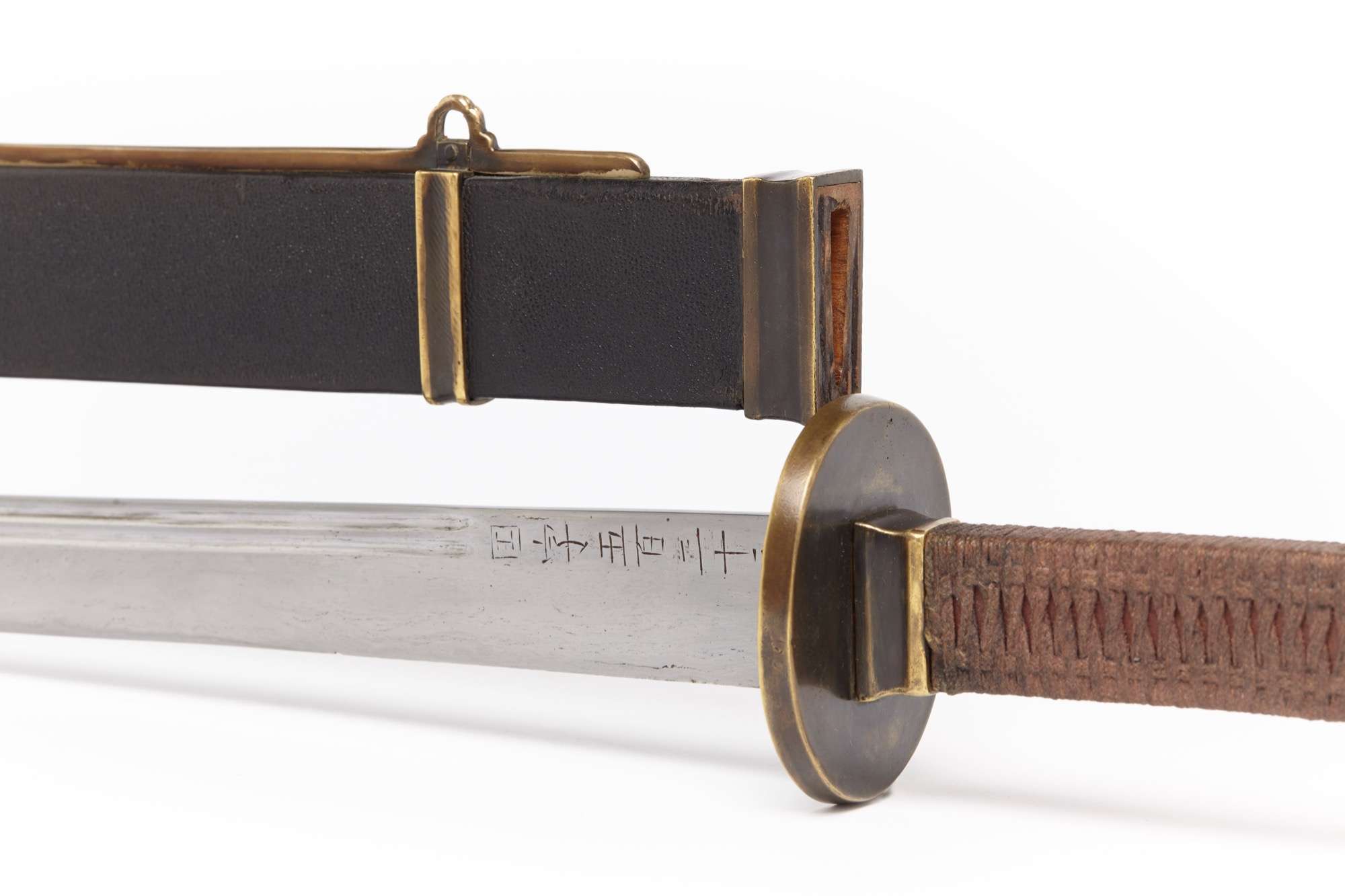 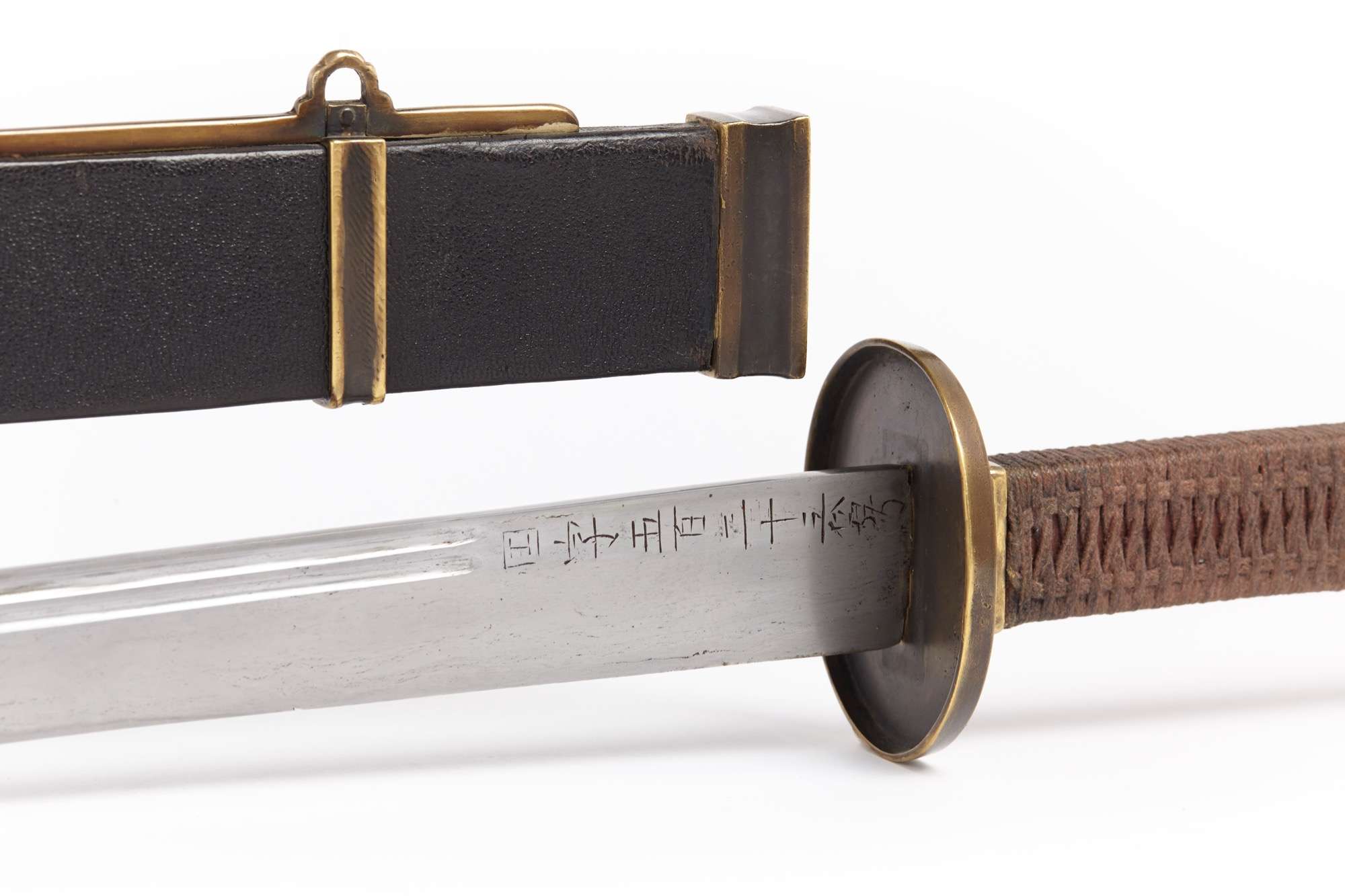 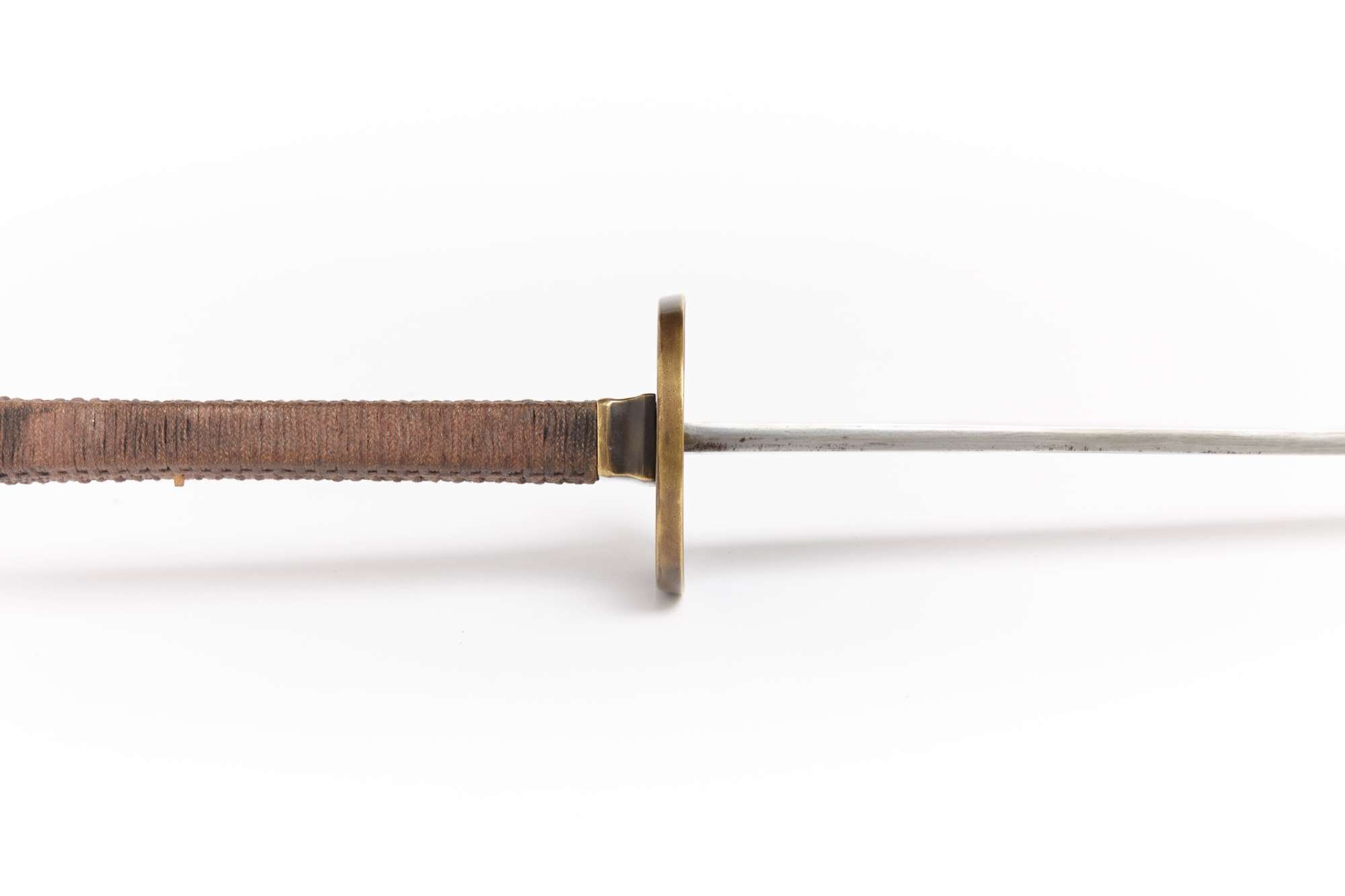 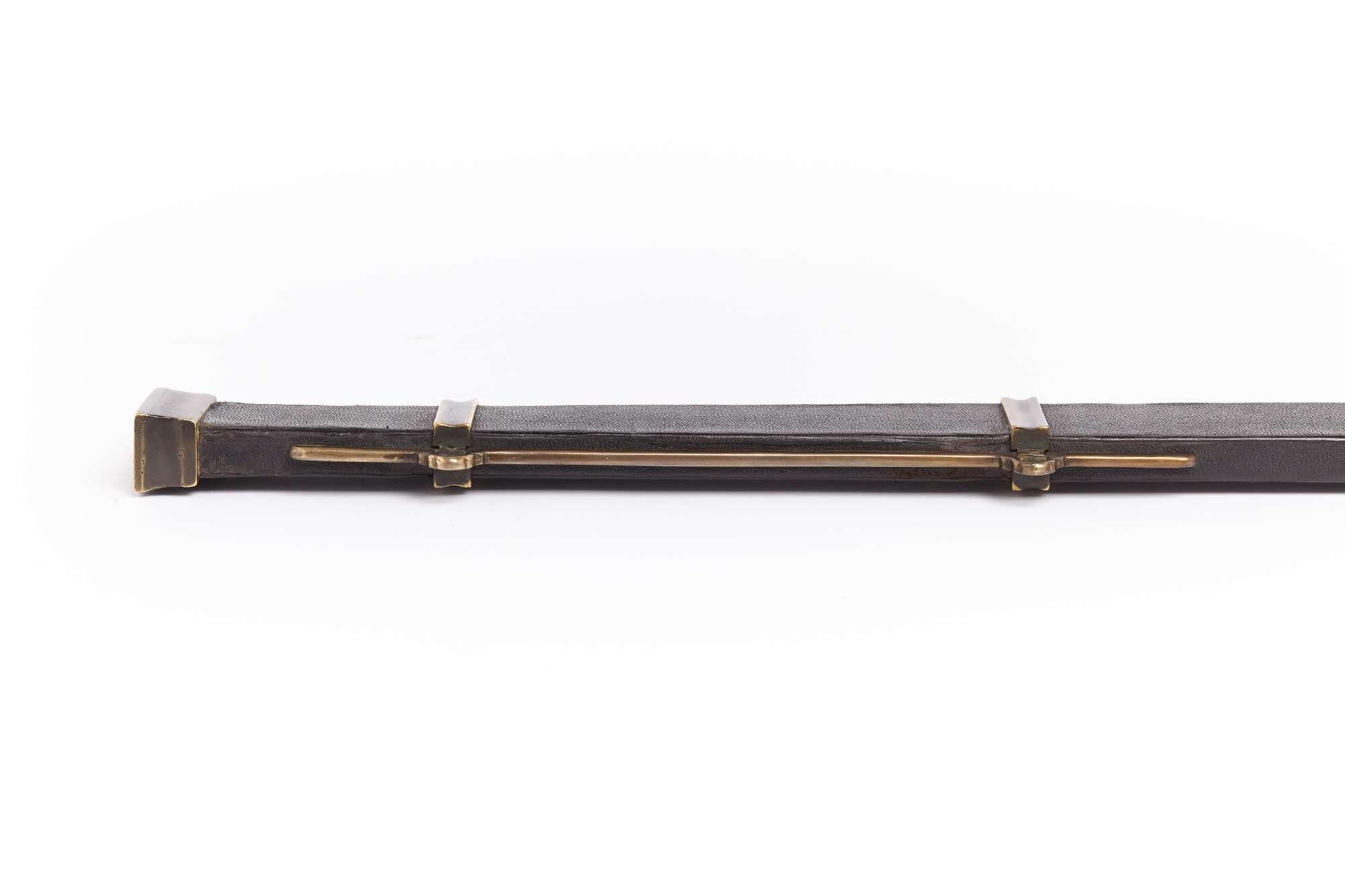 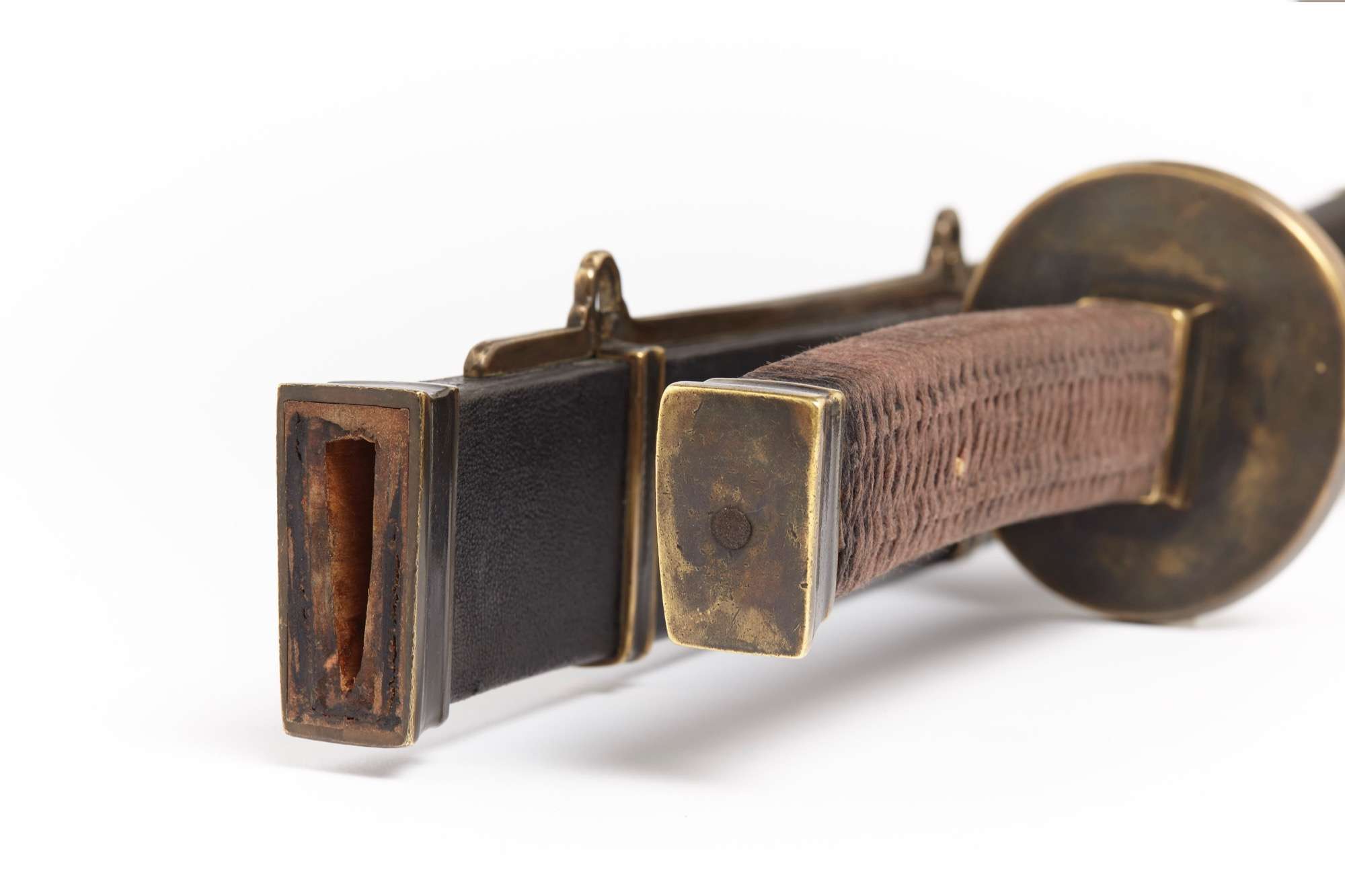 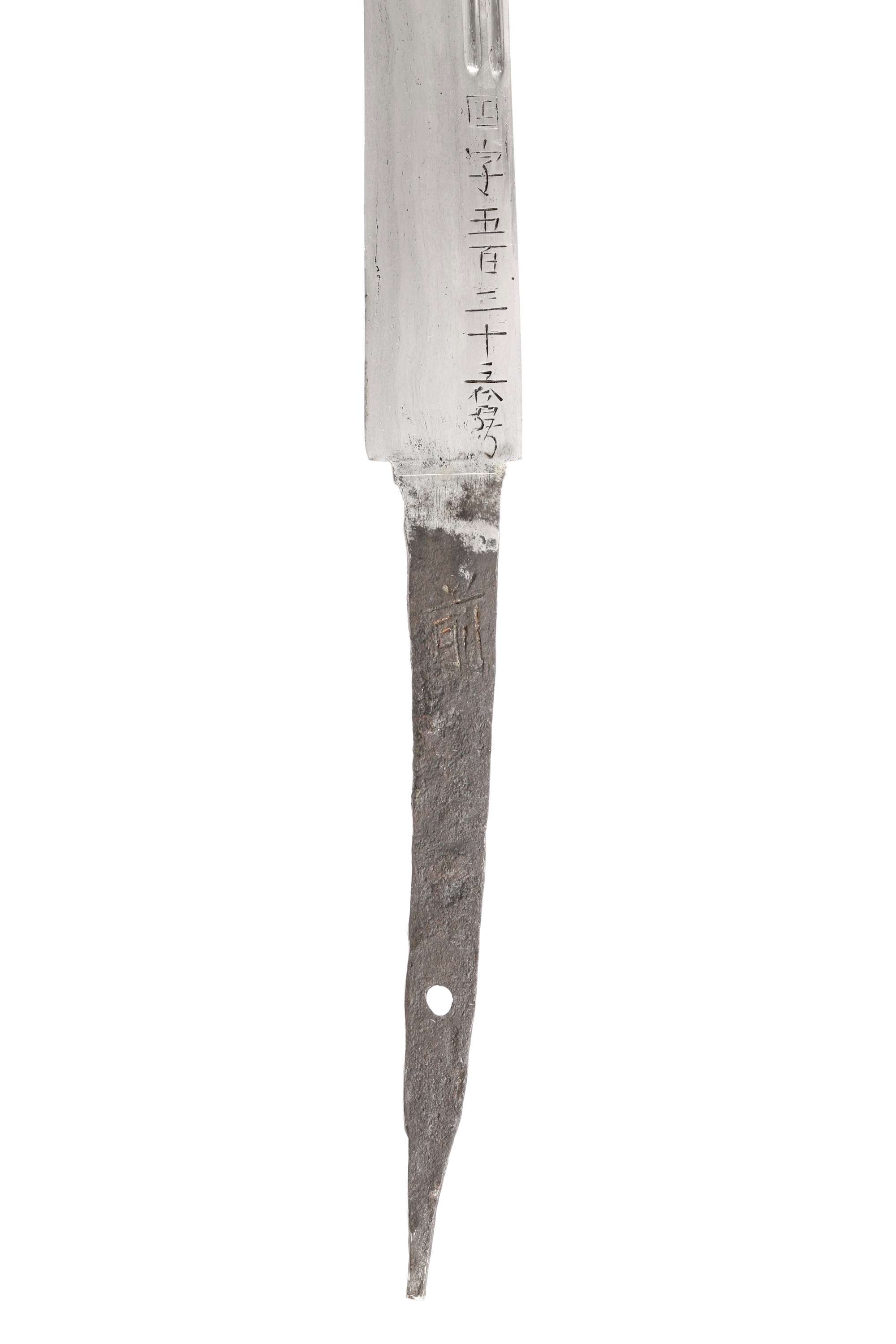 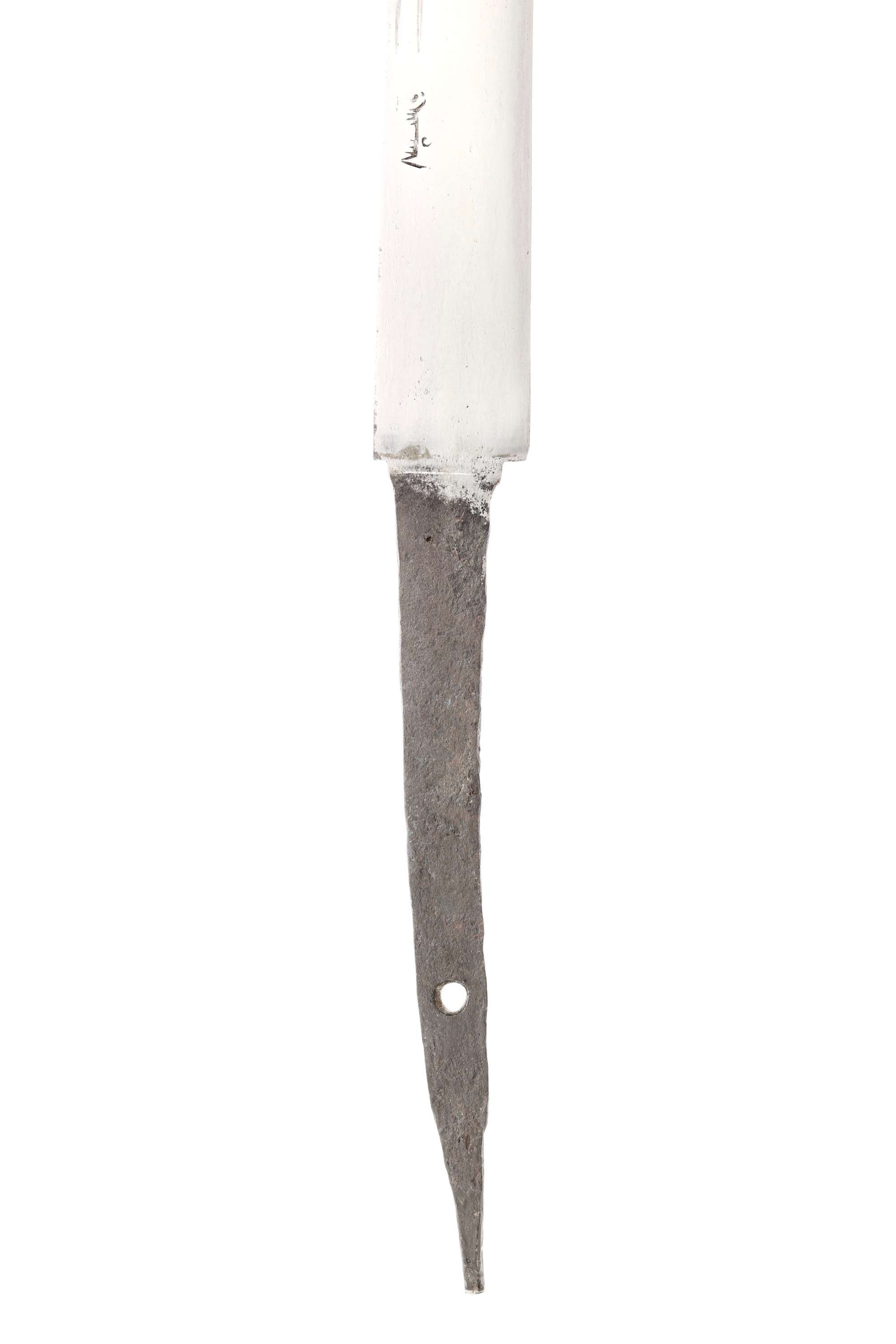 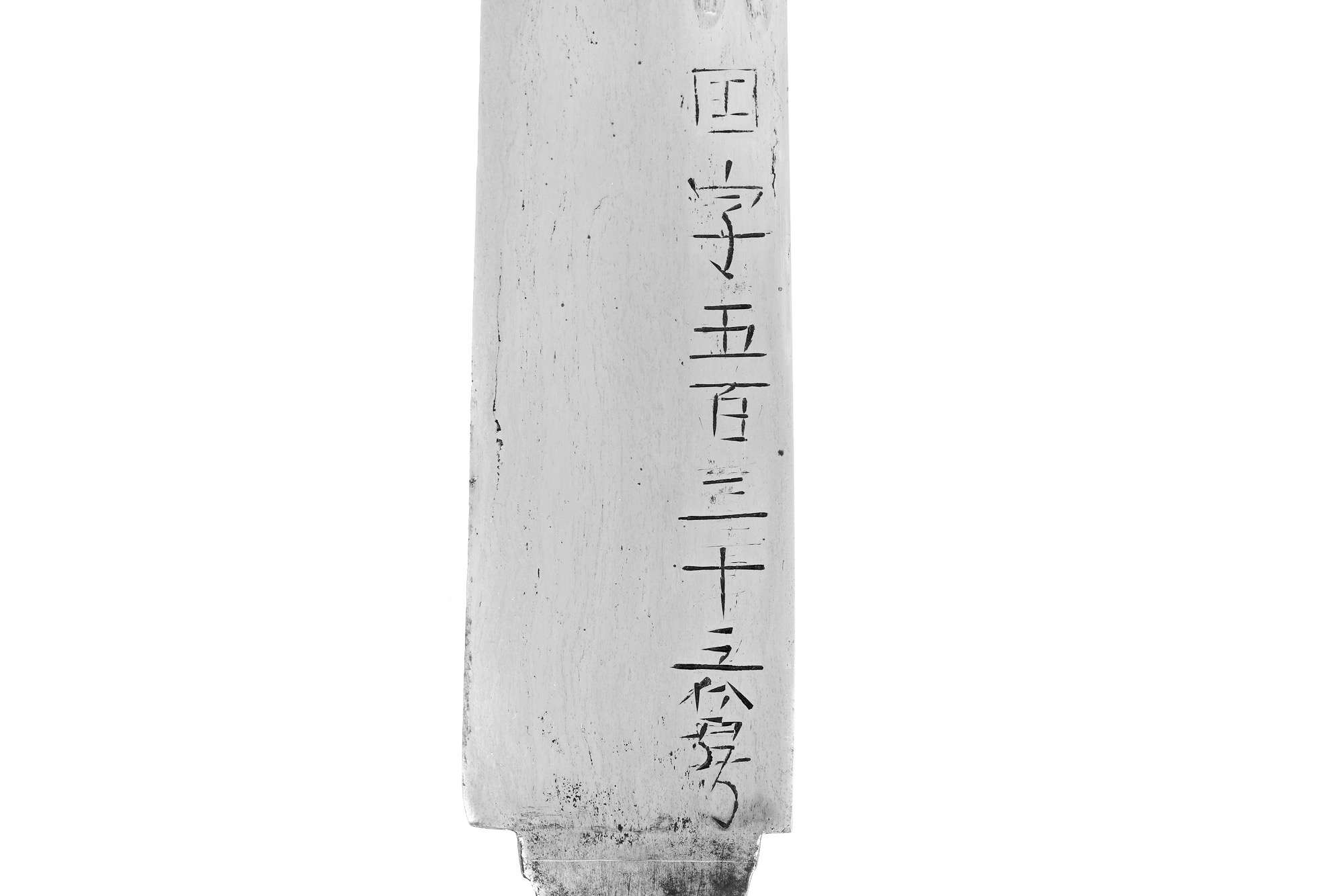 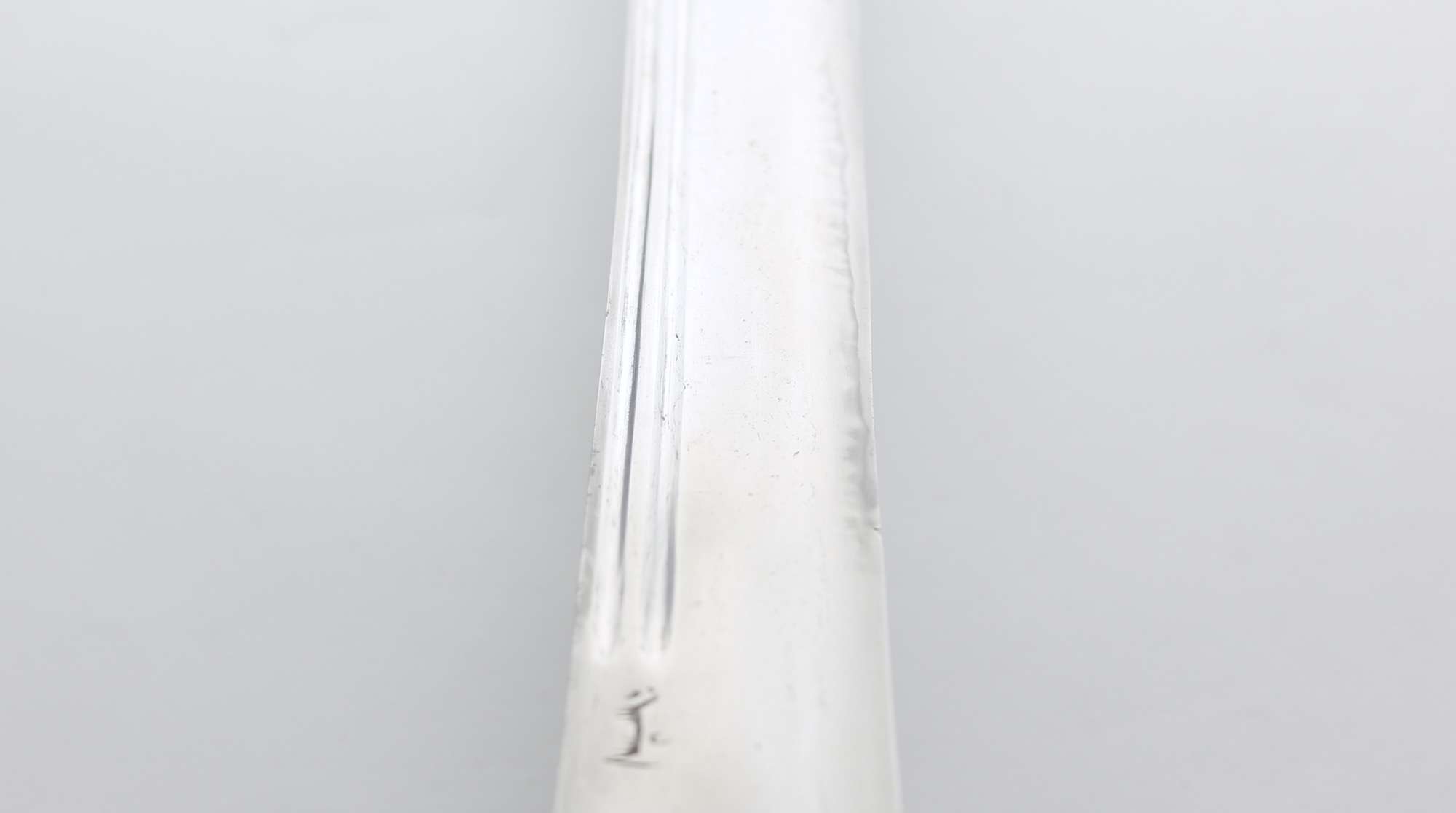 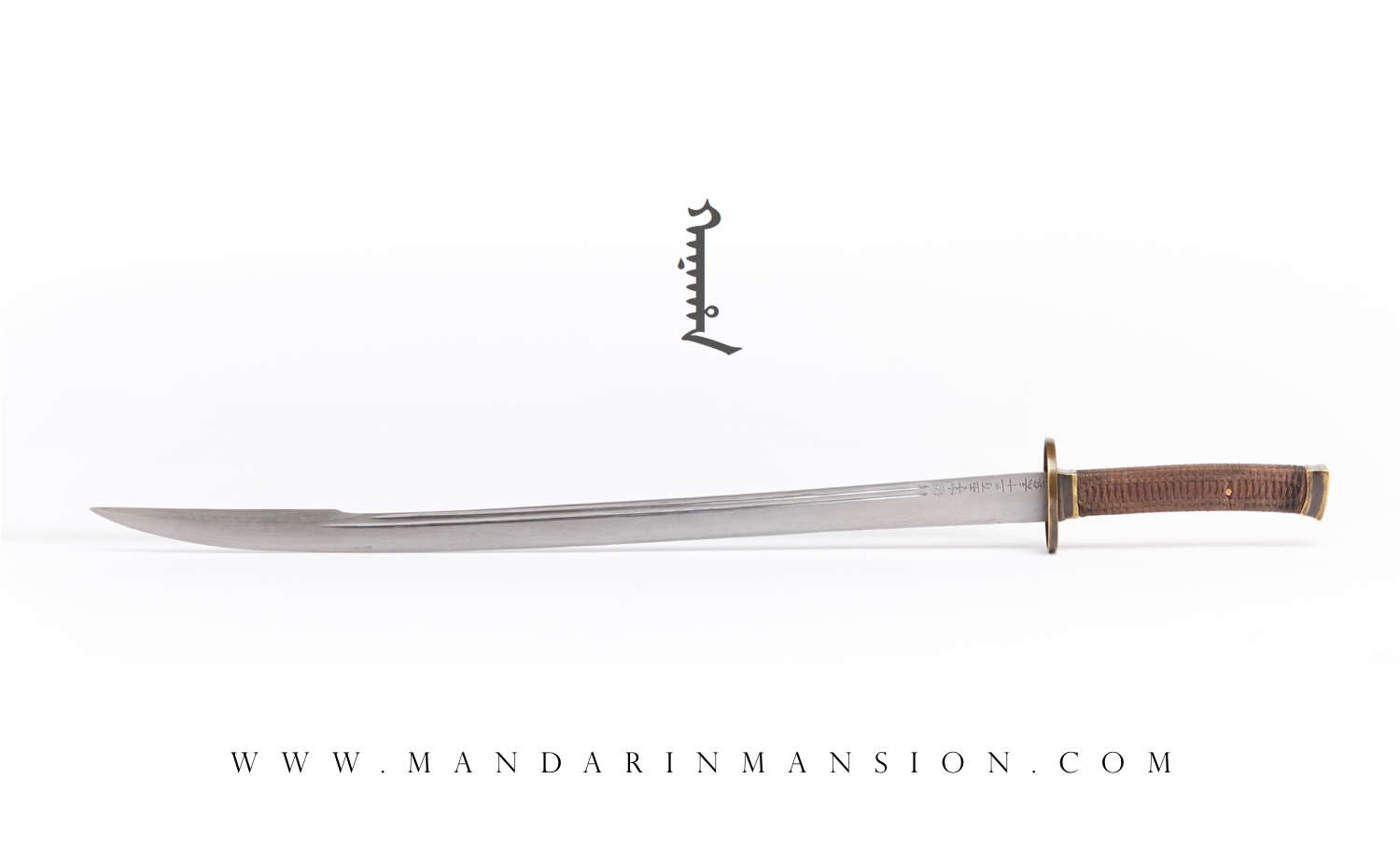