The Chinese character used is that for scythe or sickle.

One of the earliest Vietnamese swords I've had. Notice the guard, with tomoe designs that featured in the royal crest of the Ryukyu islands, possibly referring to early trade relations. It also has a seppa, the ribbed washer between guard and the base of the blade that is typical for Japanese swords.

Above a saber that is probably of the 16th century, combining the round cross-section southeast Asian style hilt with what is possibly a Japanese import blade.

Notice how the guard again has Japanese influence, with a stylized chrysanthemun shape that became very popular in Vietnam. Also notice the hitsu-ana, openings in the guard for the Japanese kogai and kozuka that are rendered useless by the round cross-section of the hilt.

Vietnamese guom of the 18th century.

A very nice Vietnamese gươm of the 18th century. The hilt style is inspired by Chinese sabers of the period, with the difference that the cross section of the handle is octagonal, as opposed to the trapezoid form of Chinese hilts of this period.

The guard is a blend of Vietnamese design and execution, but still with Japanese-inspired hitsu-ana.

A fine Vietnamese gươm with an all-horn hilt typical for southern Vietnam. The wide profile of the blade with its peculiar groove combination and well-defined backedge as very Chinese in style, as is the brass collar piece. The floral engraving on the blade is purely Vietnamese.

It, too has the tomoe cutouts in the guard that show a continuation of the style of the early Cham saber. Also, notice the seppa like washer. 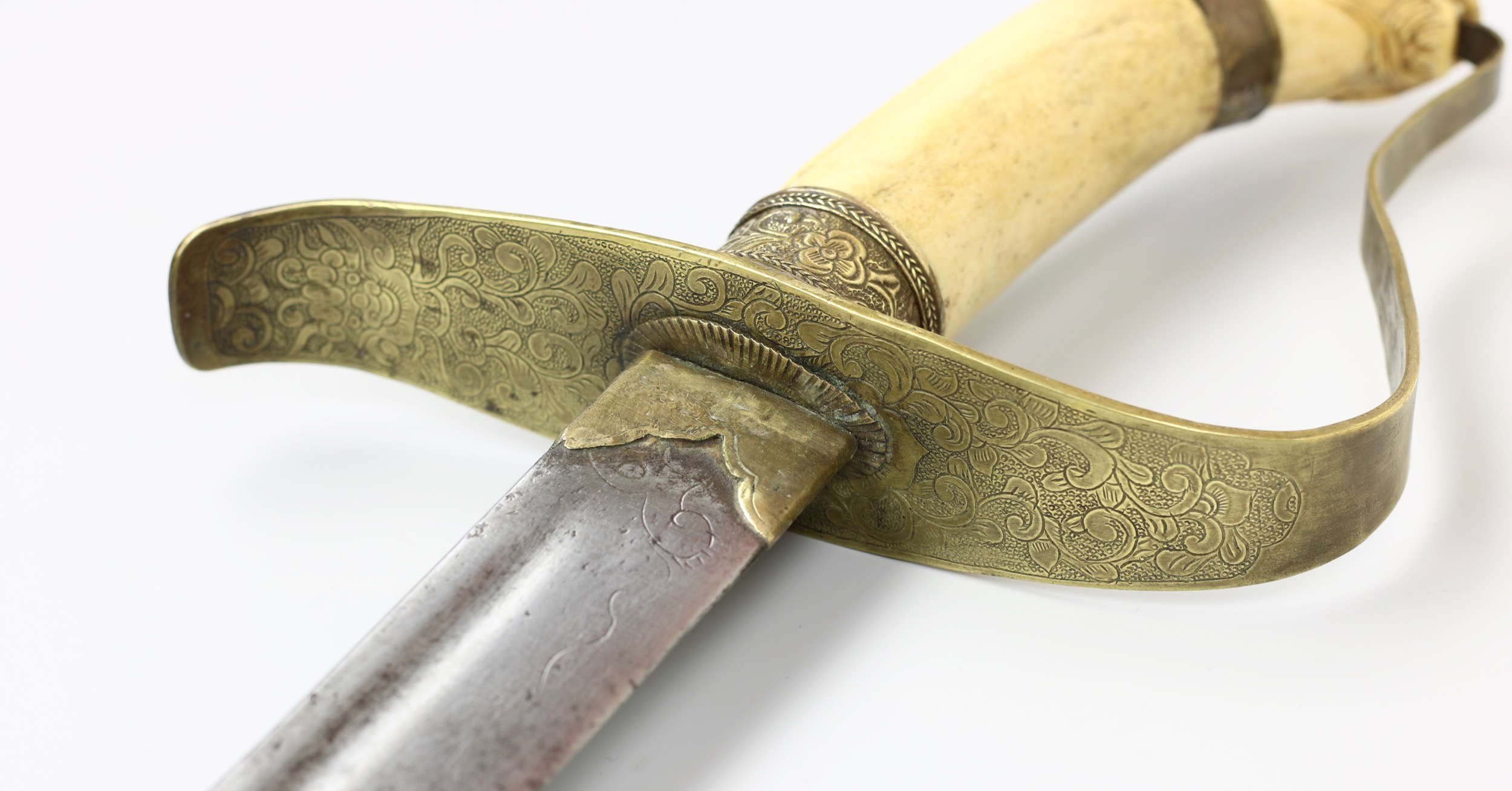 A Vietnamese gươm of the 19th century.

In the early 19th century the Vietnamese gươm starts to adopt the closed hilt and lion head pommel from European, mainly French swords. This is a feature that was to stay well into the 20th century.

Still, on the guard, the Japanese-inspired washer remains.

Ceremonial gươm of the Nguyễn dynasty

In the Nguyễn dynasty, special ceremonial gươm were made to be carried as emblems of rank by high ranked officials and their retainers. The blades on these are often quite thin and barely functional, if at all. Some examples even have brass blades that only serve to keep the hilt and scabbard together.

These were often sumptuously decorated with fine mother-of-pearl inlaid scabbards and grips of precious materials like ivory or elephant molar which makes them quite desirable today among collectors.