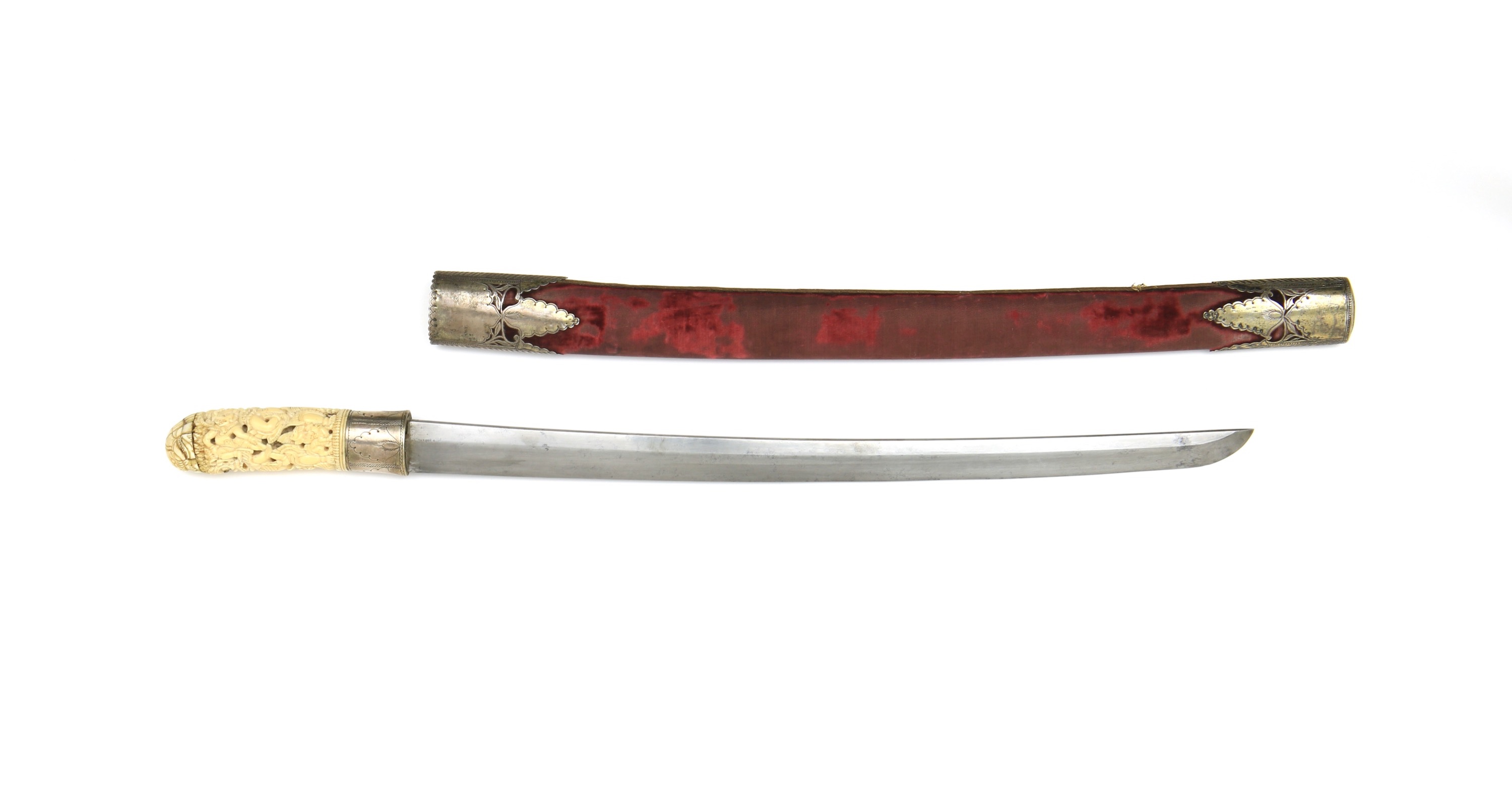 I very much like unusual and cross-cultural pieces, and this is one of the most curious ensembles I have come across so far.

It features a Japanese wakizashi blade of typical shape and proportions. It is somewhat out of polish, so no hamon or hada (temperline and grain) can be seen in its current condition. It also has no kissaki, (a ridgeline near the tip that runs perpendicular to the edge), but these are easily lost when a non-Japanese trained worker polishes the blade. The steel is very consistent, without forging flaws or any kind. This and the precise geometry is all consistent with Japanese work and I have no doubt that the piece is, indeed, Japanese and not one of the many Southeast Asian copies that were made in the 17th and 18th centuries.

The nakago (tang) was cut down trimmed in width in order to fit in the finely carved hilt. There are two holes in the tang for retainer pins that were probably used with the original Japanese mounting it once had.

Exposed tang during conservation. The reduced tang of the wakizashi blade, showing the two holes.
The black is resin used to fit Burmese and Indian blades to their hilts, the cement-like material is filler.

The sword is mounted in a finely carved ivory hilt, of typical Burmese style and workmanship. Such work was mostly associated with Moulmein (Mawlamyine) in the southern stretch of Burma although ivory carving was also done in Rangoon and Pyinmana in central Burma.1

The hilt depicts a number of figures. Most prominently on the edge side is a monkey-like demon with piercing black eyes who holds two daggers, than lje (သန်လျက်). Such daggers are part of Burmese official regalia but normally only one is carried, the use of two symbolizes great strength.2 The demon is naked, and between its legs is a bird that snaps its beak at the demon's penis which explains the demon's distressed expression! The underlying message may be that something the powerful can be overcome by using its weakness, like our David and Goliath.

Another large figure is seen on the other side, this one with a calm and content expression, eyes closed. Either side shows on the ground a chinthe (lion) with a small bird on its back, with above that a monkey-like figure (Hanuman) jumping upwards towards the pommel. The work is nicely done and executed with great charm.

The pommel cap is a separate piece of ivory, depicting some sort of monster. It's less well executed than the rest of the hilt and is clearly later and possibly by a different hand, and has several old repairs.

The engraved silver ferrule is not Burmese, but Indian, and is en-suite with the mounts of the scabbard. 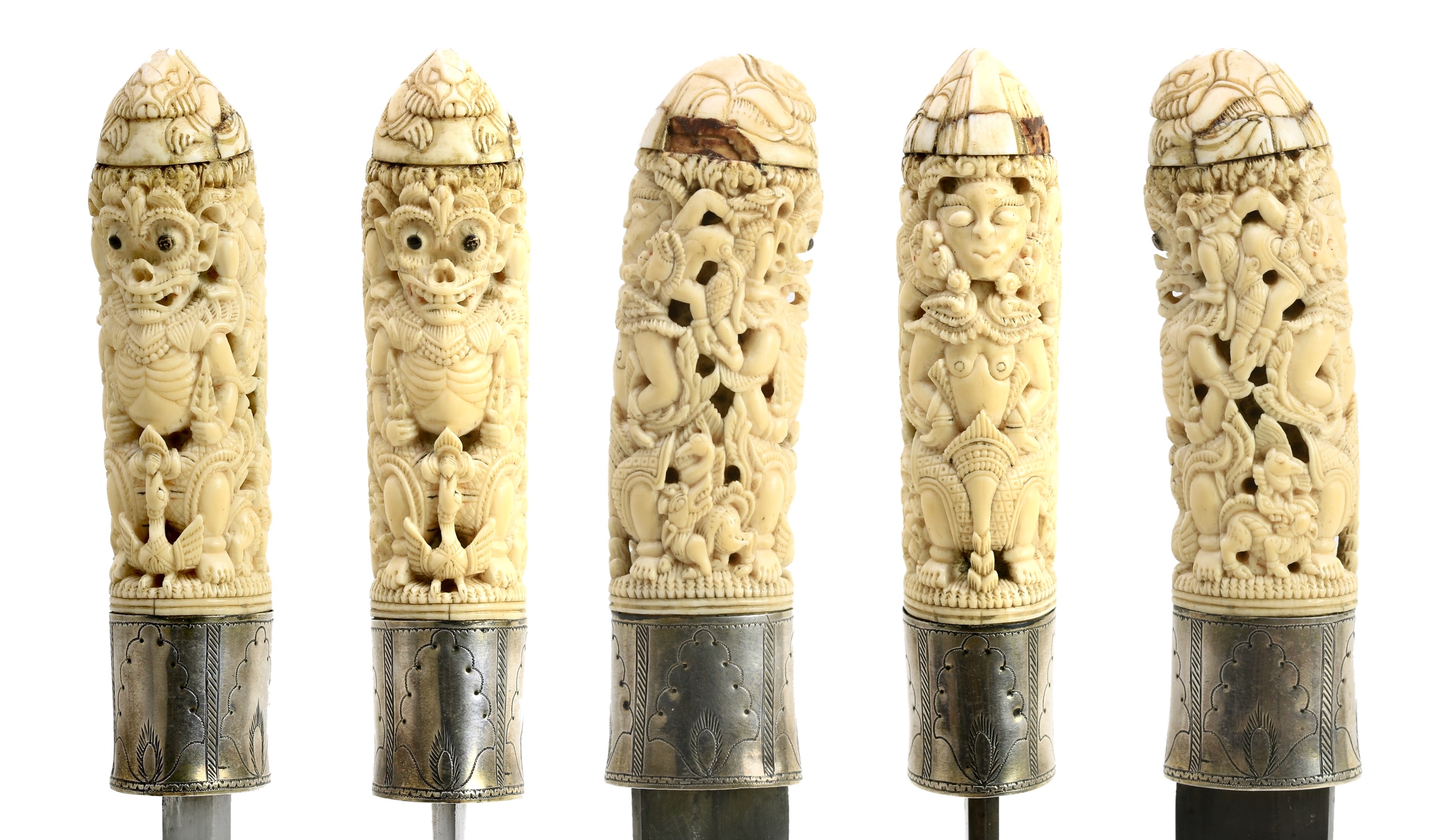 The hilt seen from various angles.

The sword comes with a red velvet-covered scabbard, the velvet pile now mostly worn as is usually the case with this material. On the back covering the seem, runs a strip of braided metallic wire, a typical finish on north Indian scabbards.

The scabbard has two ornamental silver mounts with remains of gilding. The mounts are very Indian, in a style that reminds somewhat of work that was done in Lucknow, Uttar Pradesh.

The bottom plate of the scabbard's chape features a logo with a cross in an oval shape, with lines radiating outwards. I have not been able to place it as of yet but it may be a hint as to who commissioned the piece.

Some sort of monogram appears on the scabbard endpiece.

The silverwork, including the ferrule, and the scabbard are north Indian so I think that whoever commissioned this piece came to India with a wakizashi blade and a Burmese carved hilt.

The finely carved Burmese hilt is most certainly of the 19th century, and so are the scabbard mounts. The Japanese blade could be from anywhere from the 16th to 19th centuries, hard to say exactly because it is out of polish and if the tang was ever signed, that information is now lost. Early Japanese blades would have been easy to get by, and even today are still surprisingly common. That's all we can say about "when".

"Who" and "why" remains. I get the impression that the parts were collected by someone who traveled through Asia and wanted to combine several elements that he liked. The Japanese were renowned for their blades, the Burmese for their fine and most charming ivory carving, and the Indians for their beautiful velvets and silverwork.

It could have been a wealthy local, perhaps a merchant operating in one of Asia's trade hubs who liked to wear something strange like this as a personal side-arm and a conversation piece. But given that cross symbol at the end of the scabbard, and the mix of cultures, I tend to think it was more likely commissioned by a traveling diplomat or colonial officer. We might never know for sure.

Whatever we come up with needs to make sense, but sometimes historical reality is stranger than fiction!

An intriguing ensemble combining some of the finer elements found in each of its source cultures. A Japanese blade, a fine Burmese carved hilt in a pretty nice Indian scabbard of a quality only seen on some of the better pieces.

A next owner may want to look into the symbol at the scabbard's end for more information. Or, have the blade polished by a Japanese polisher to once again reveal its hamon.

CITES
The handle is of ivory of the species Elephas Maximus, listed on CITES appendix I. The item is within article 2 of council regulation EC NO338/97 and within Convention of International Trade of Endangered Species (CITES): The materials were removed from the wild and significantly altered from their natural state well before the date of the convention: June 1st, 1947. It can be freely traded within the EU without a permit and is eligible for a CITES export permit for trade outside of the EU.

Buyers outside of Europe: Beware that it may not be possible to export the item to your country due to restrictions on the international trade of ivory. CITES sets the minimal restrictions, countries, and states under the convention often maintain further restrictions on top of CITES. I will be happy to advise you. 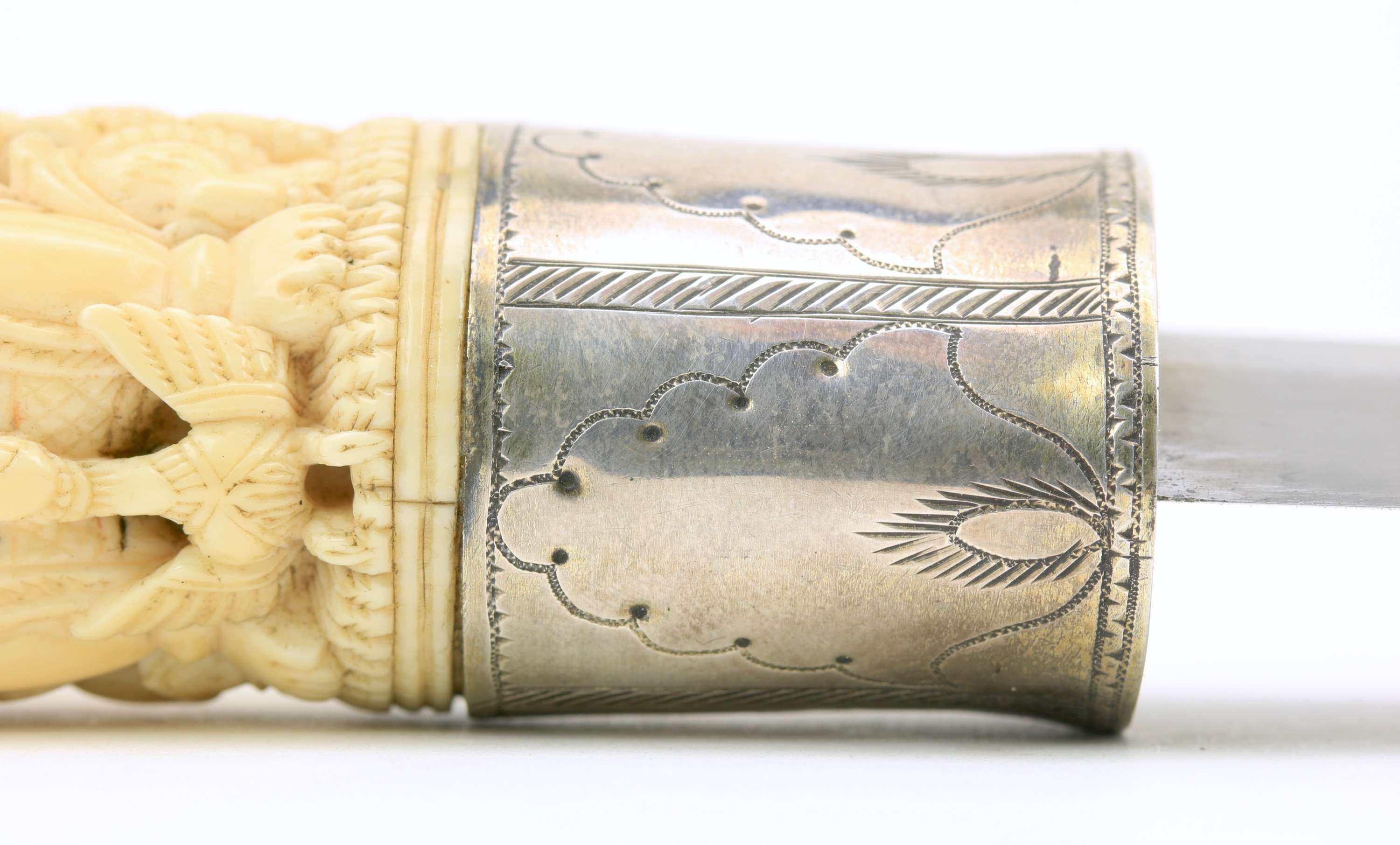 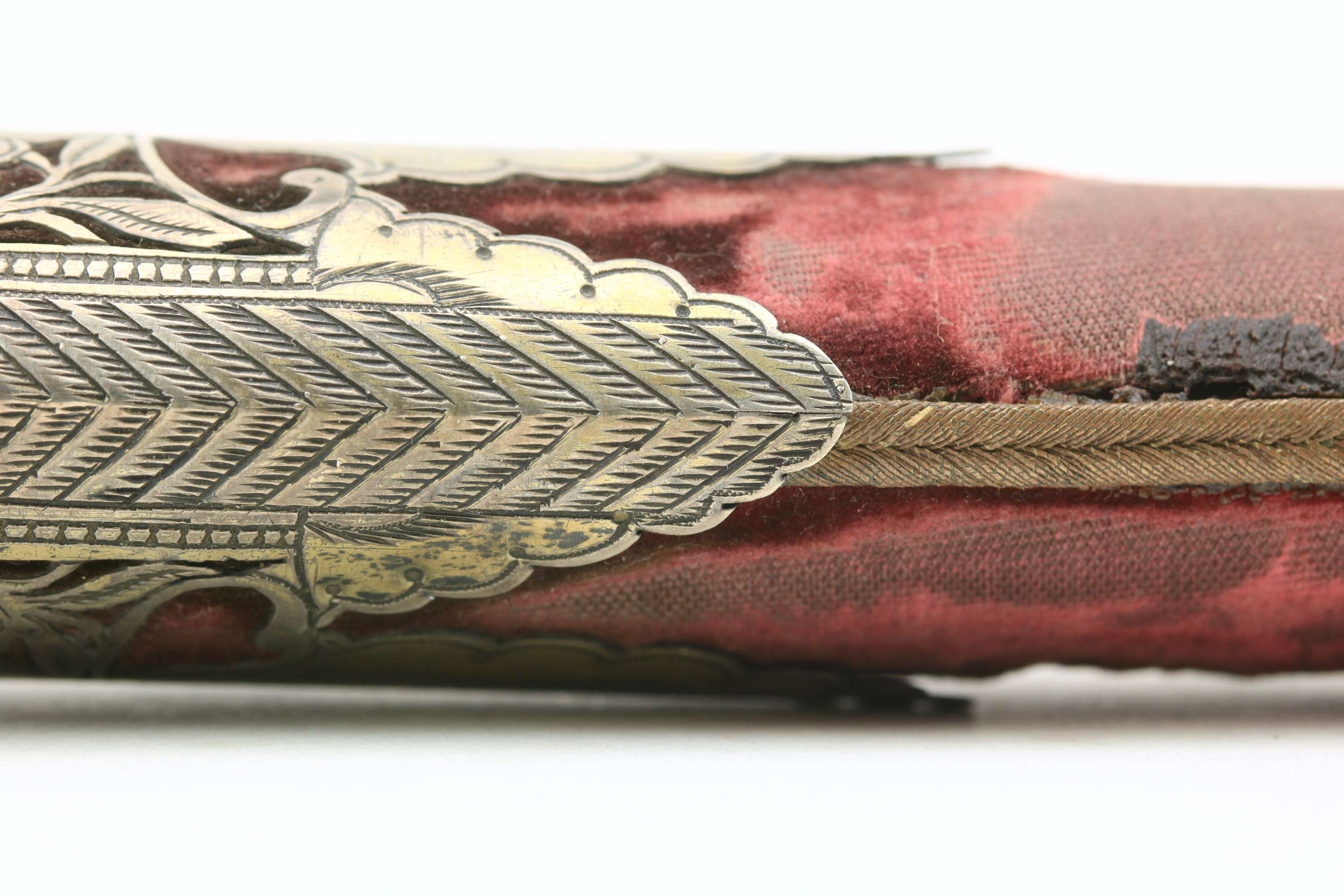