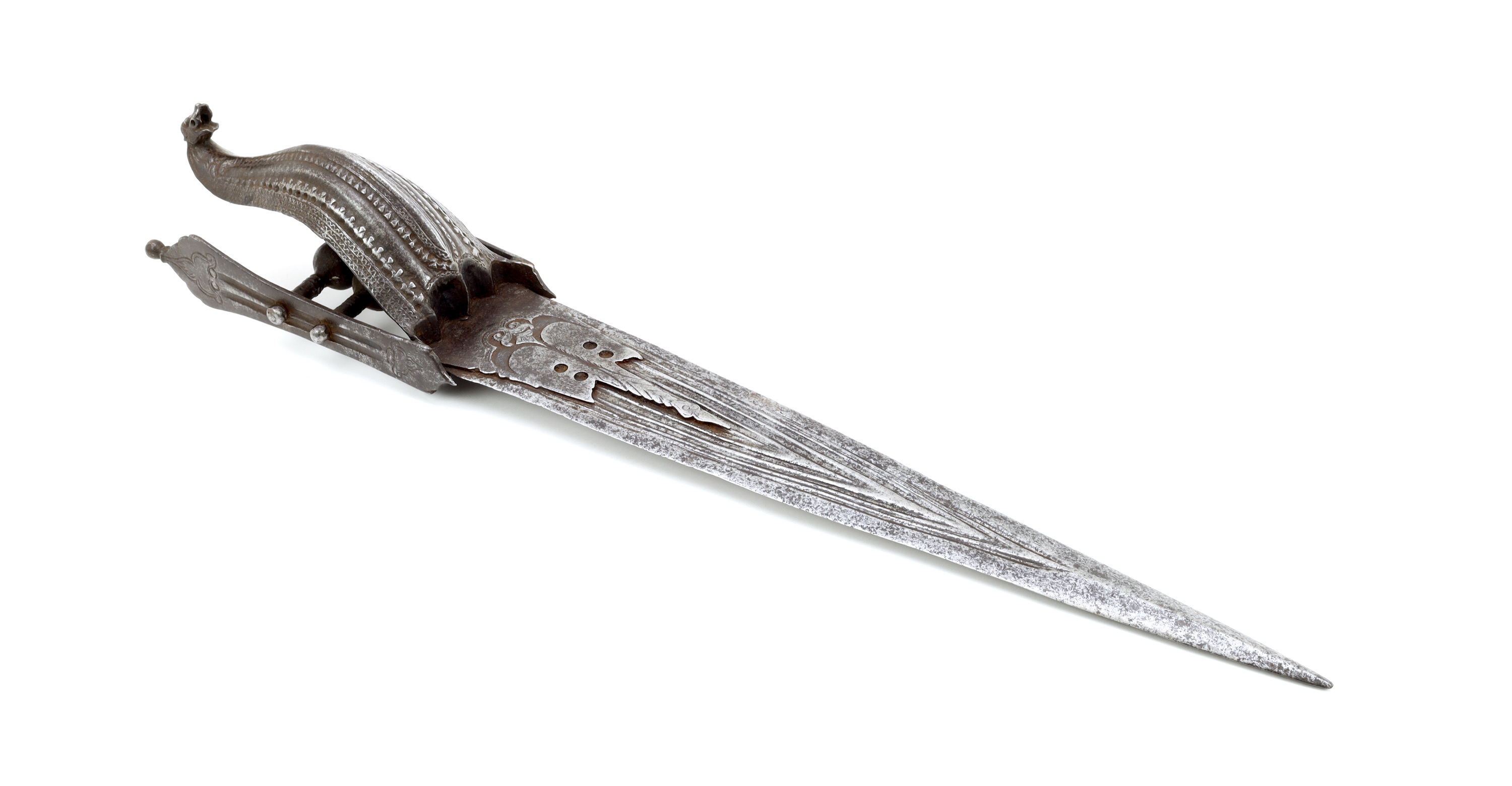 Ahead of langets 3 mm

Ahead of langets 51 mm

3 cm from base of hilt

The Vijayanagara Empire originated in south India from attempts of several smaller Hindu kingdoms to resist the Muslim invasion from the north. Founded in 1336, its capital was the city of Vijayanagara, which at its height was after Beijing the second-largest city in the world with an estimated population of half a million people. It was overrun by the Deccan Sultanates in 1565, the start of a gradual decline of the empire that lead to its fall in 1646. Many Vijayanagara arms in Western collections today were found in the Tanjore armory, the contents of which were sold by the British in the 1860s.1

One of the most characteristic weapons of the Vijayanagara are the push daggers or katara, after the Tamil kaţţāri, a weapon best known in the western world under the English romanization "katar". The Vijayanagara examples are believed to be the earliest forms of this characteristic Indian weapon. They typically have rather large blades and a shield-like guard incorporated into the handle.

On the Vijayanagara stone statues at Ranganathaswamy Temple, Srirangam for example you mainly see this hooded katar in use as primary weapons either used with a shield, or wielded with one in each hand. 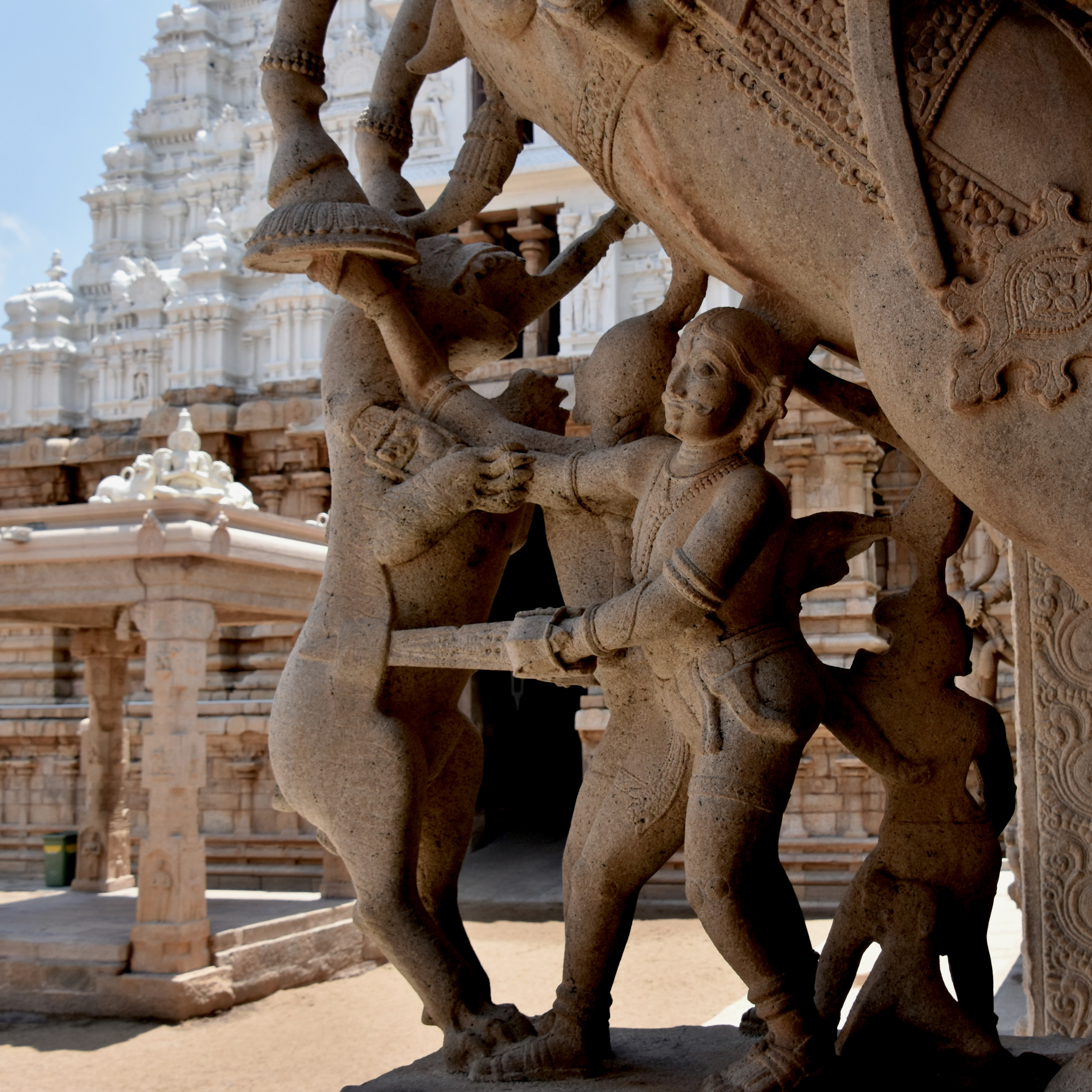 These characteristic shields would soon disappear from katar as their role changed from primary melee weapon to an everyday carry dagger and backup weapon. Making them without shield is a concession on hand protection, but at the same time made them much easier to wear as part of one's attire and enabled a quicker draw.

A classic example. It has the wide-triangular ribbed blade you also see in the Vijayanagara statues. The ribs on this one are well defined and stand out quite high above the lower surfaces. It has a thickened tip, often believed to have been designed for better armor piercing. With 8mm it is the most thickened tip I have seen on these to date, which was probably a rection to exposure to more heavy armor in their clashes with the Deccan Sultanates that were trying to push south.

The blade riveted to two large langets, of typical form, which in turn were welded against the base of the hilt. The blade itself is further secured with two small tangs that were peened from the inside of the hilt.

The base of the hilt, with cusped form, mimics the archways of Hindu architecture: 'Facade on the W. Side of the Nayakar Durbar Hill' in Thanjavur (formerly Tanjore).
From the photograph album by Capt. Linnaeus Tripe,
'Photographic Views in Tanjore and Trivady'.
South India, 1858.

The side bars flare out dramatically towards the end, a typical feature of 16th century South Indian design. Another very early feature are the handle bars with their large ball-shaped features that would get a lot smaller and eventually change shape over the course of the next century.

The shield is nicely formed with deep chiseling, and at its end a very detailed Yali, a mythival creature that symbolized strength and vigilance. Yali were also the royal emblem of the Vijayanagara Empire. Besides being a nice decorative feature, the upturned head serves as a catch to prevent a blade that hit the shield to slide into the arm.

The piece comes from Han Hendriks (1919-2008), a notable Dutch blacksmith with a forge in the Balistraat, The Hague. He kept a study collection of antique ironwork from around the world, which he acquired mainly in the 1950s and 1960s. I have purchased some of them from his descendants.

A nice, honest example of its kind. Some age-related wear and tear, but no restorations, repairs or significant losses. It has also not been overcleaned like many have. 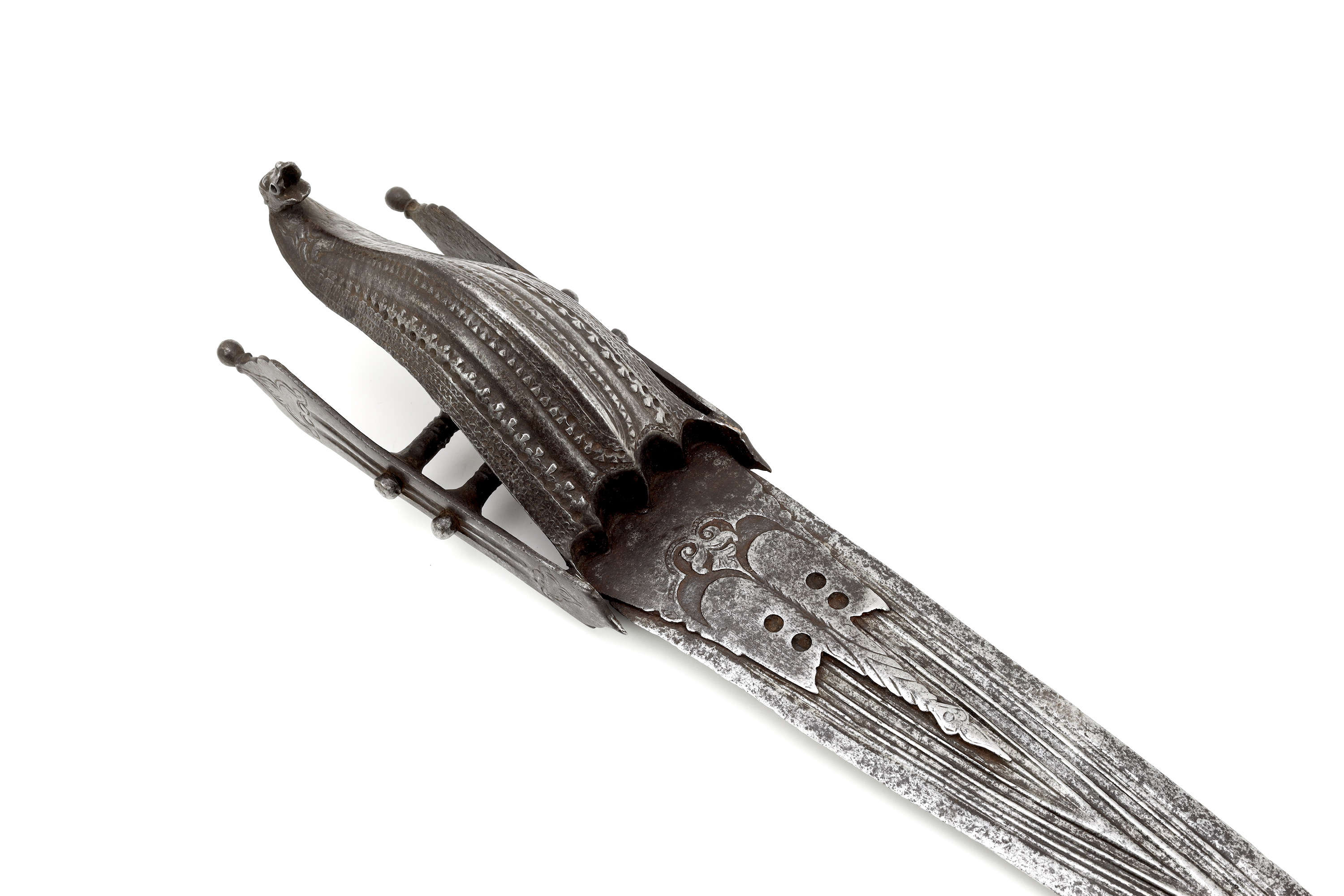 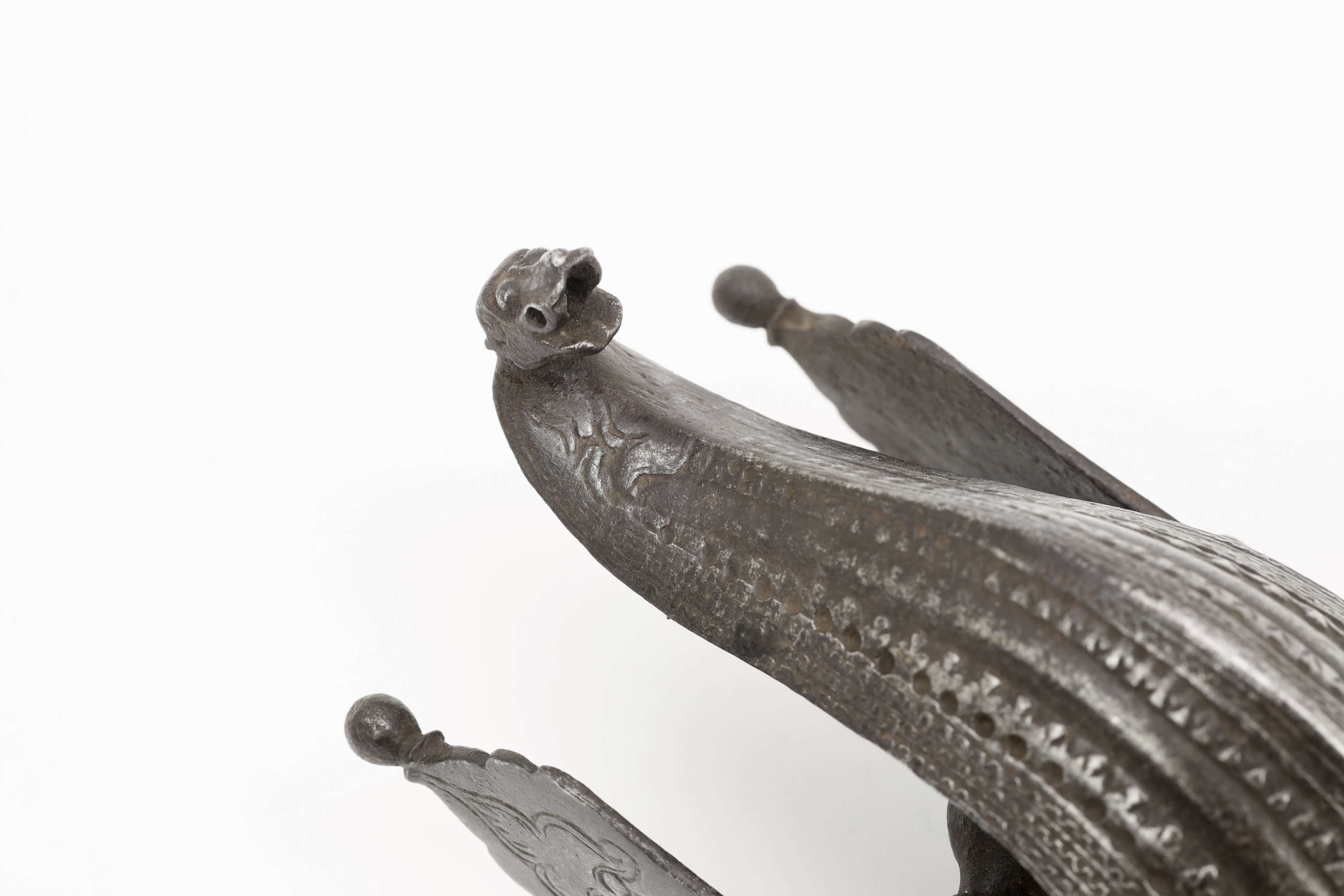 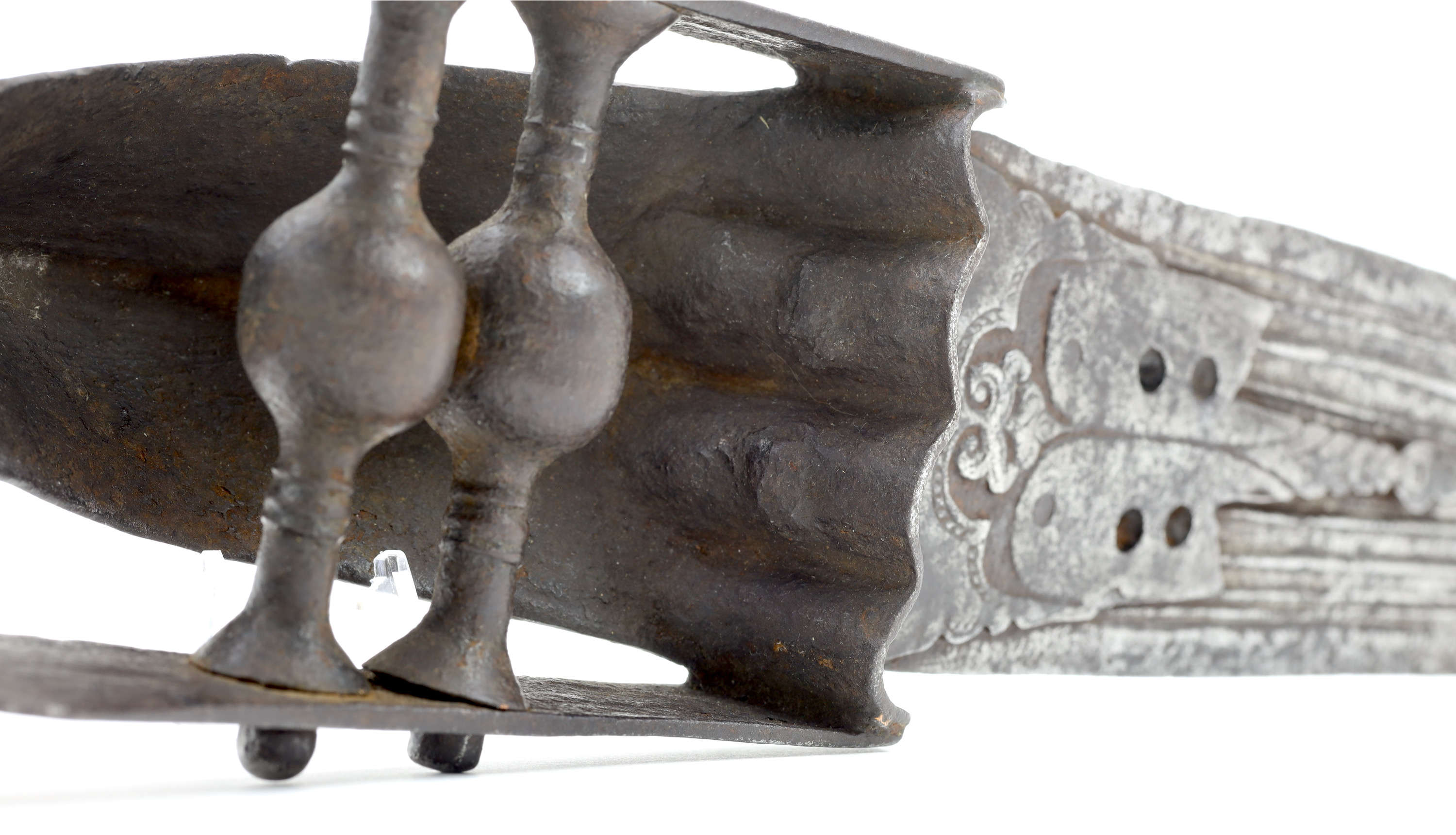 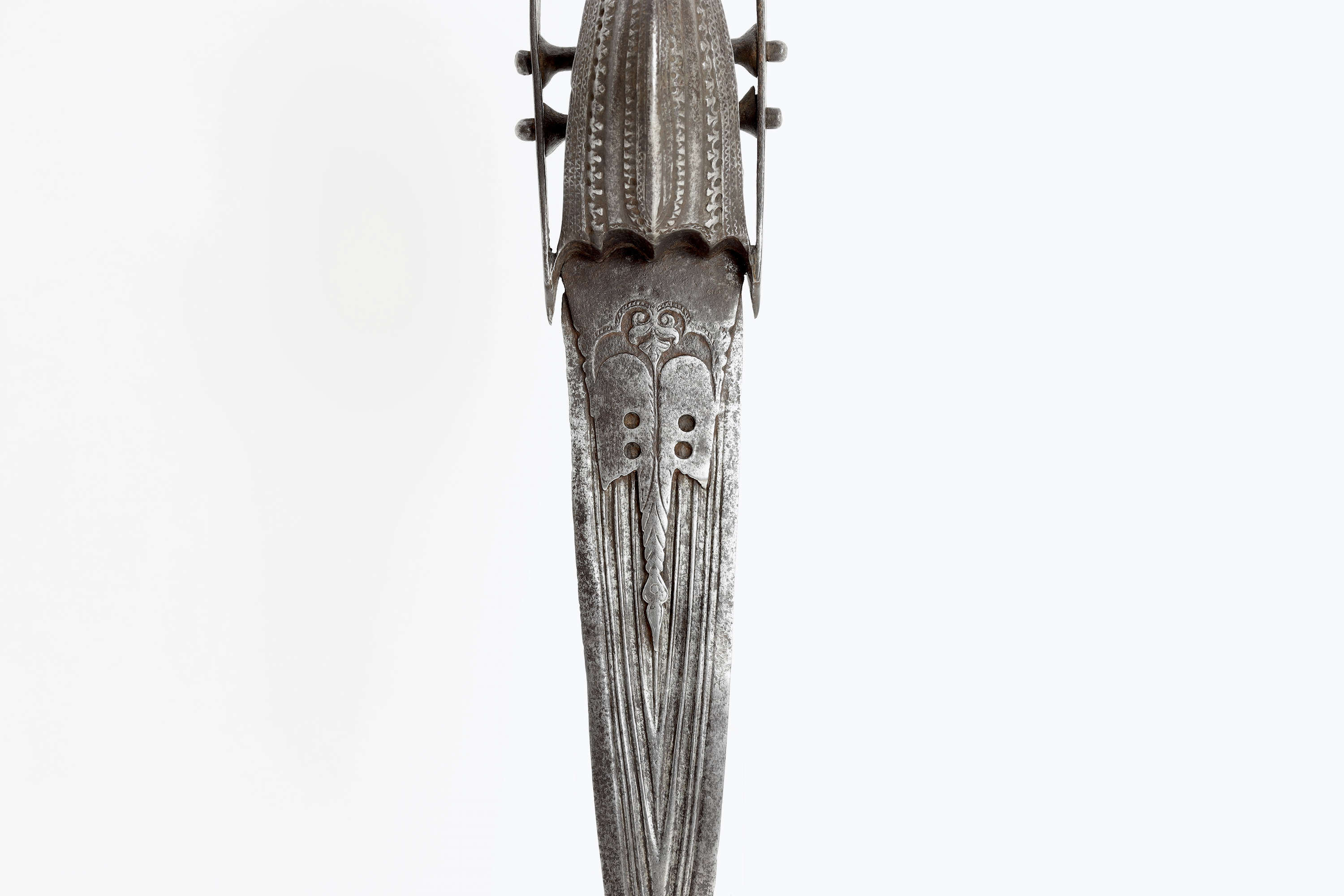 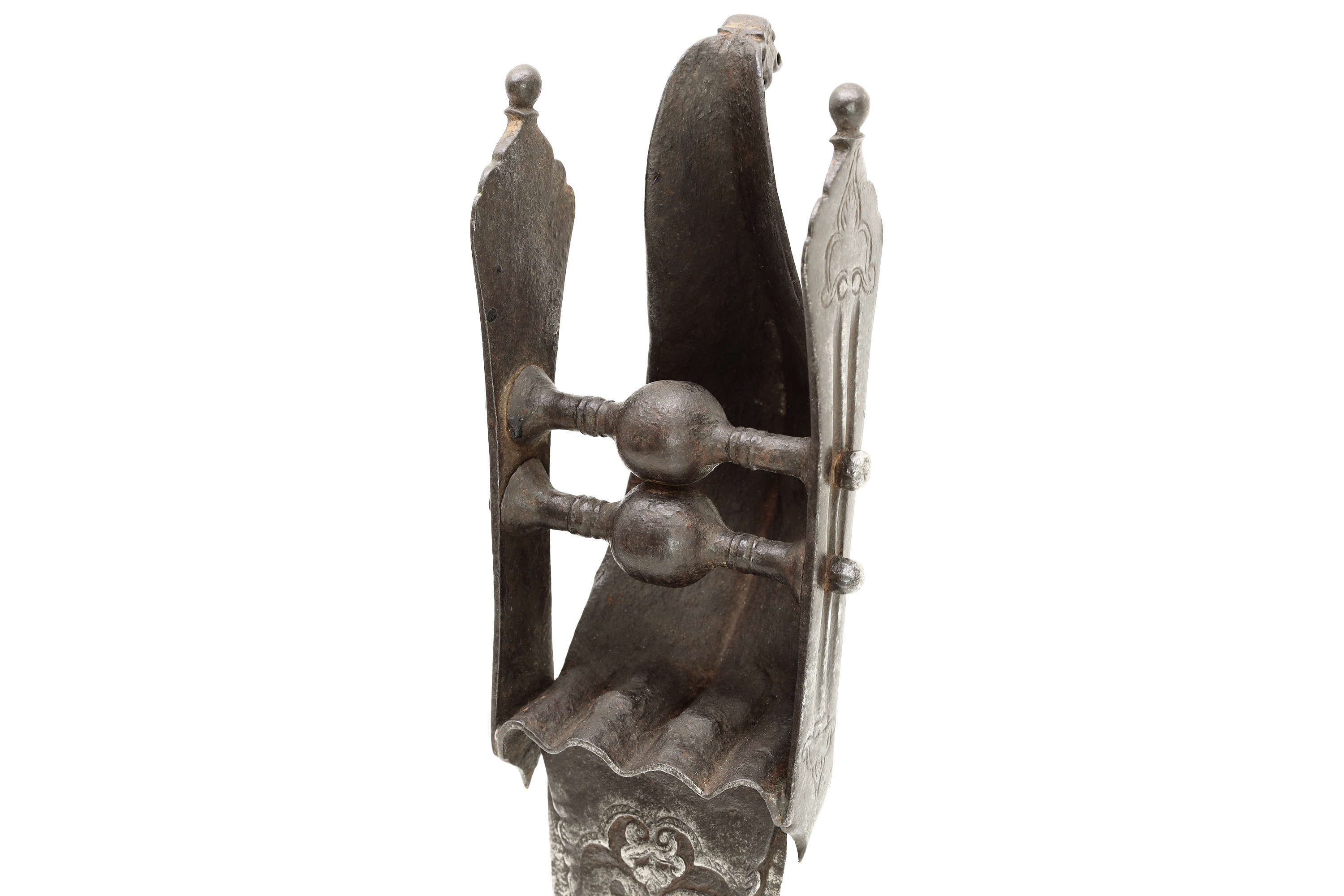 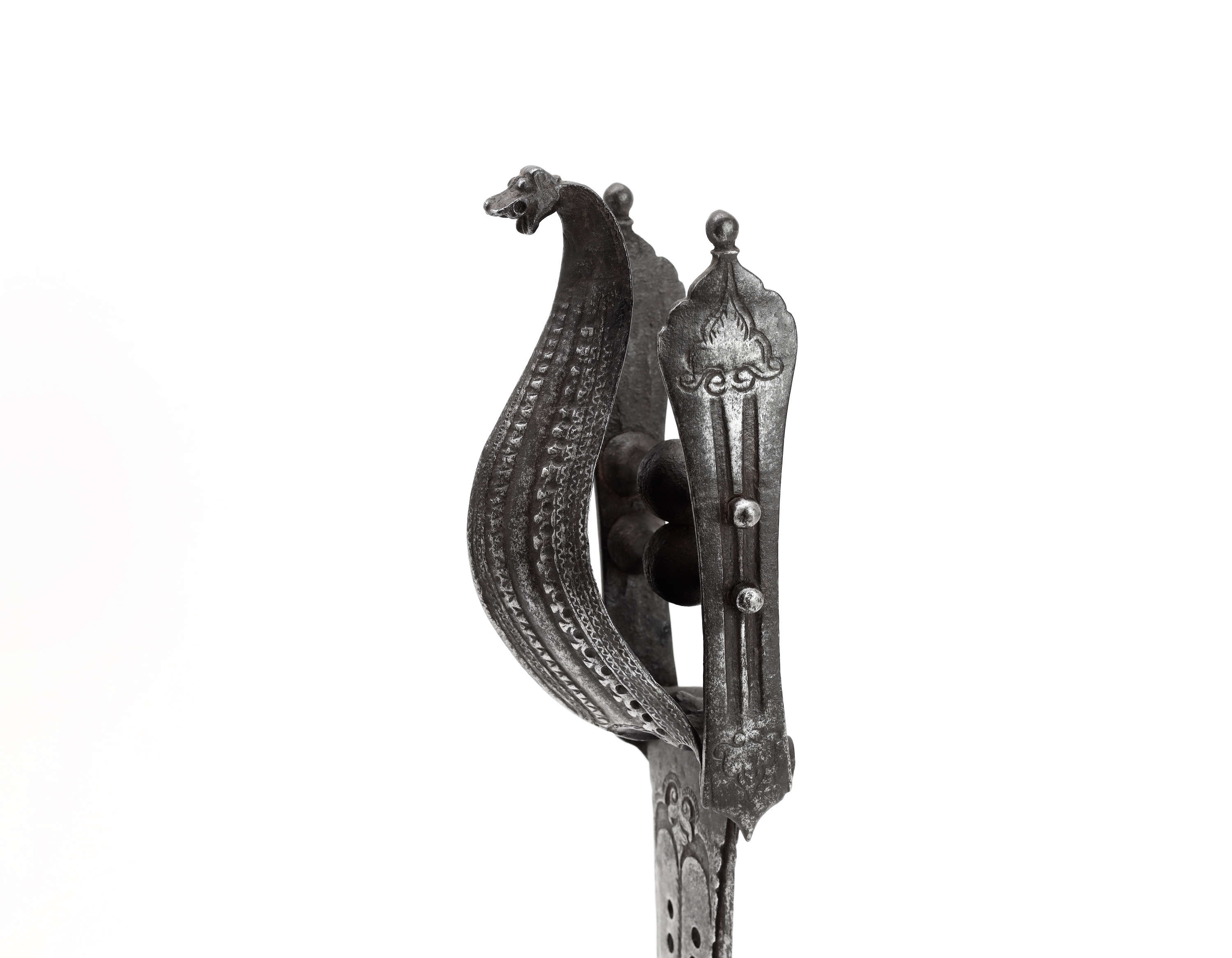 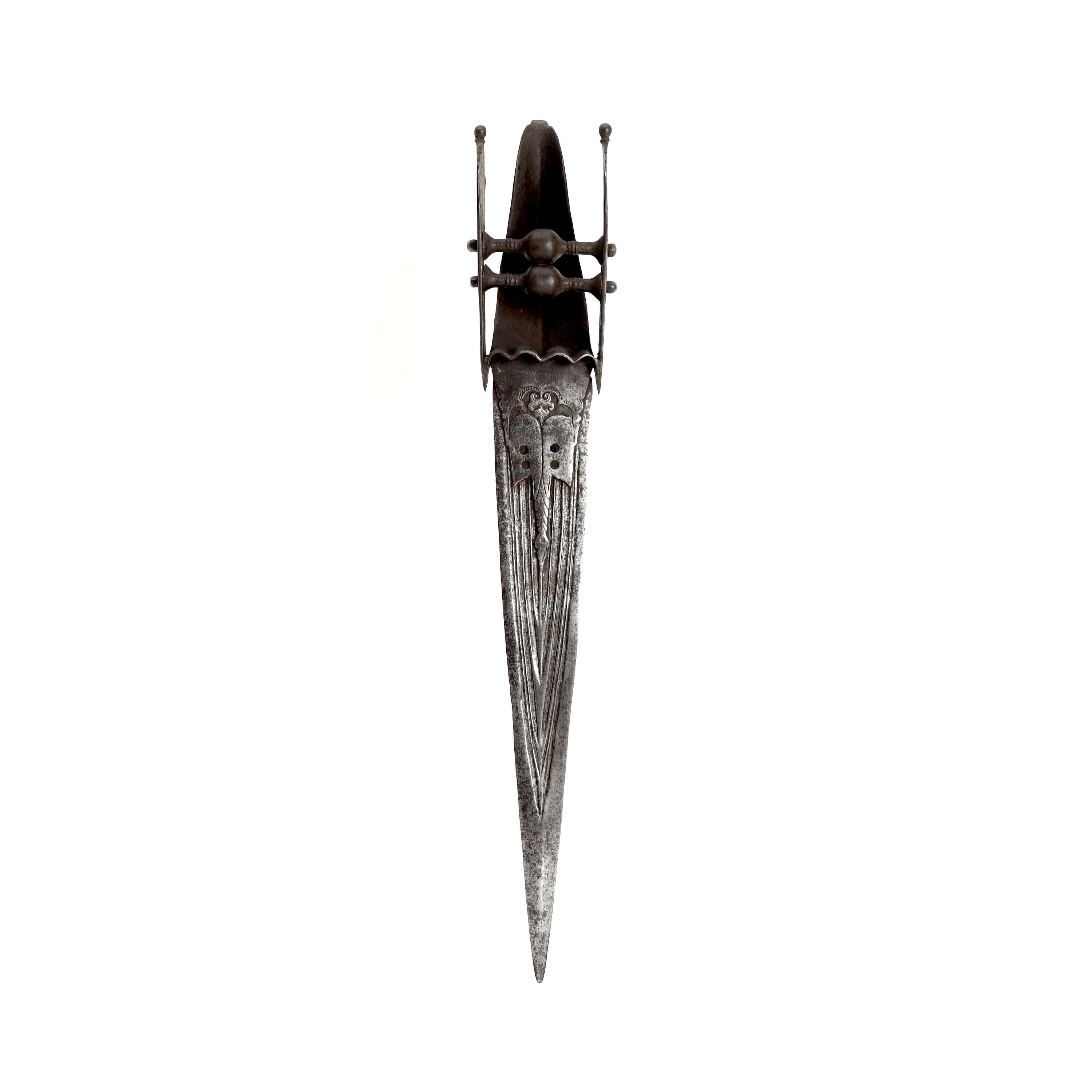 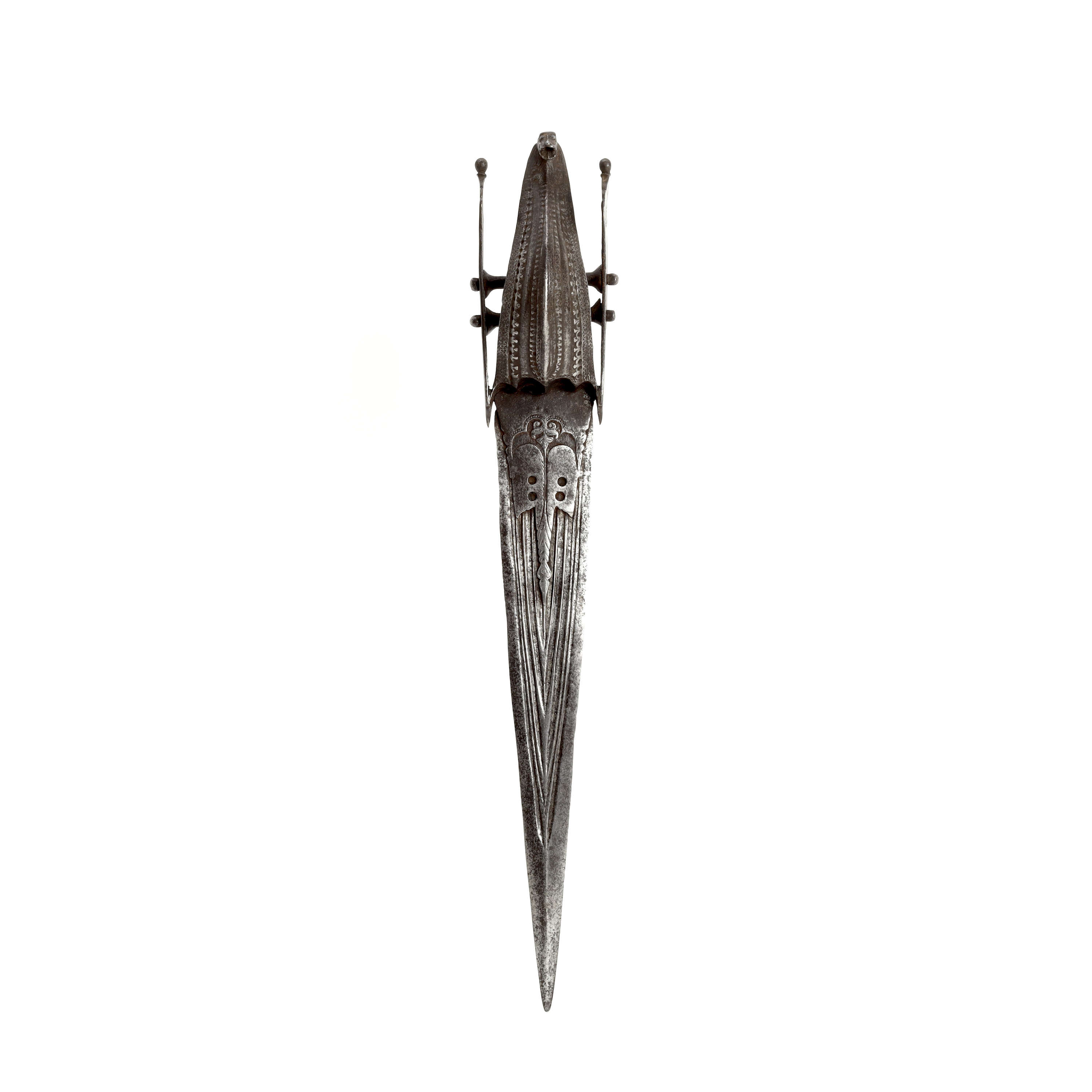