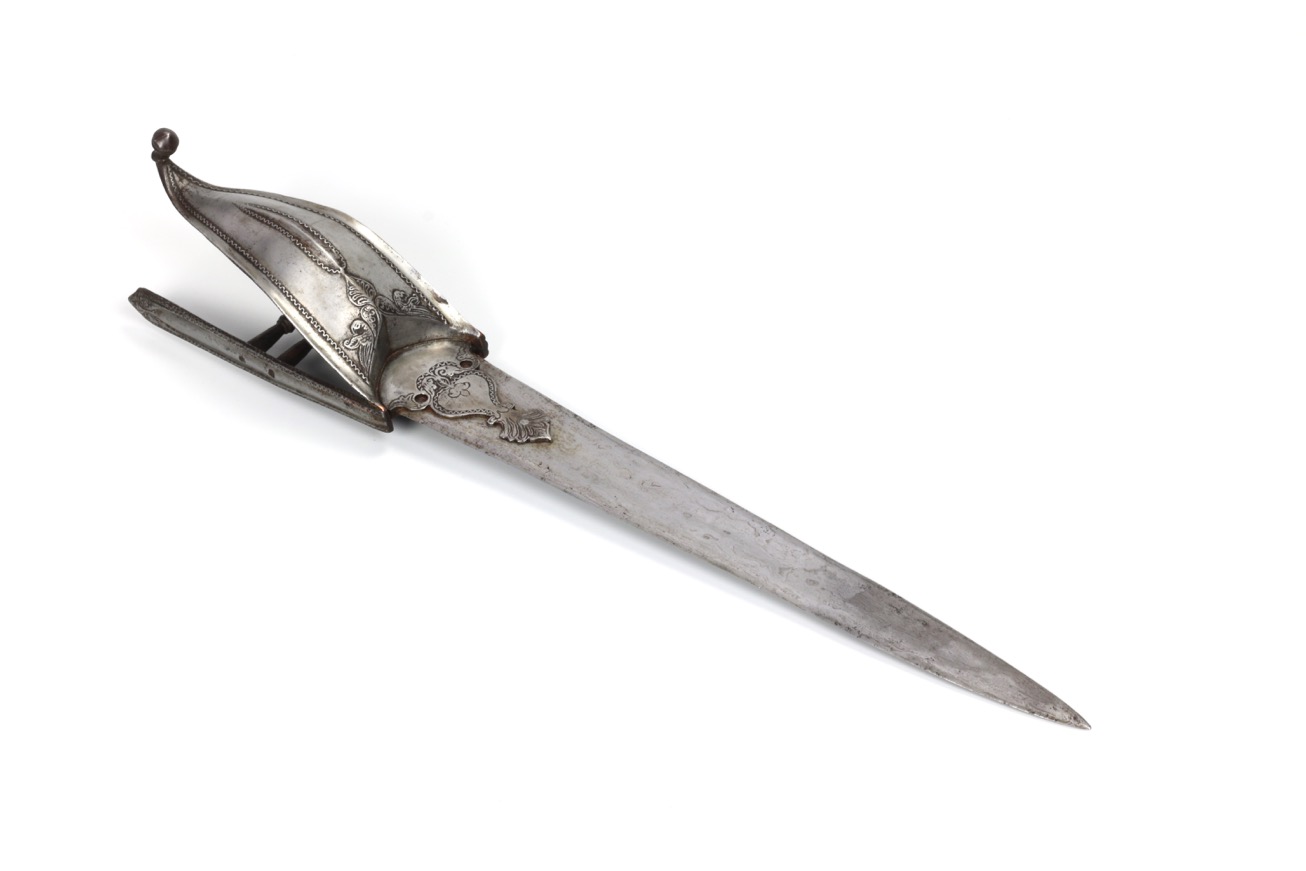 The Vijayanagara Empire originated in south India from attempts of several smaller Hindu kingdoms to resist the Muslim invasion from the north. Founded in 1336, its capital was the city of Vijayanagara, which at it's height was after Beijing the second largest city in the world with an estimated population of half a million people. It was overrun by the Deccan Sultanates in 1565, the start of a gradual decline of the empire that ultimately lead to its fall in 1646. Many Vijayanagara arms in Western collections today were found in the Tanjore armory, the contents of which were confiscated and sold off by the British in the 1860's.

One of the most characteristic weapons of the Vijayanagara are the push daggers or katara, after the Tamil kaţţāri, a weapon best known in the western world under the English romanization "katar". The Vijayanagara examples are believed to be the earliest forms of this characteristic Indian weapon. These early katar are characterized by having rather long blades and a shield-like guard incorporated into the handle.

A classic Vijayanagara katar of the late 16th century with its characteristic protective shield and a grasping handle consisting of two transverse bars with spool-shaped center sections. The shield is of thick, solid steel with a hammered, deeply patinated inside and clean, polished outside.

The shield is reminiscent in thickness, shape, workmanship, and decor of the armorer's work on European-influenced Deccan cuirasses of the 16th and 17th centuries.1 Shield and sidebars are decorated with zig-zag patterns that are also found on these cuirasses.

Further decor includes swirling and palm-like motifs on the shield, sidebars and blade langets. Another notable feature of its decor are the two parrots at the base of the shield. Compare these elements to a somewhat similar example in the Metropolitan Museum accession number 36.25.905. Notice in comparison that the decor on this one is better articulated than on the Met's example, while theirs has a more classic south Indian blade with multiple grooves.

The parrot is the vehicle of Kāma, the god of love. According to Elgood, the presence of parrots of these katars can probably be linked to the universal linkage between love and war, a theme frequently used in Tamil poetry. It is interesting to note that the decor does not stop on the outside, but continues on the inside of the handlebars; You get the sense that it was not purely done for the observer, but served a much deeper purpose for the owner or wielder of the weapon. All decor is executed with great precision.

Many Vijayanagara katar from the late 16th century onwards are fitted with imported and subsequently cut-down European rapier blades. This blade has a native south Indian blade forged of mechanical "damascus" steel with a prominent active pattern. The blade starts wide and tapers gradually to an acute point, its center section is mildly hollow-ground.

All parts are very sturdy, nothing is loose. No significant losses or damage. There is a shallow hairline crack on the top of the blade. It remains confined to the top layers of damascus steel -which is exactly why damascus steel is so strong- and not seen on the reverse side. It does not seem to affect the structural integrity of the blade. The katar comes with a modern-made scabbard, of excellent fit, covered with antique red velvet.

These Vijayanagara hooded katar emerged in the mid 16th century and were only used in a fairly brief period. Their shapes started to change by the late 16th century with more drastic changes over the course of the 17th century. By the mid 17th century, they lost their characteristic hoods. Some of the first examples are seen on statues in the Ranganatha Temple of this period, which bear similarities to the one offered here.2

Hallmarks of these earliest examples are the solid, closed shields and relatively modest decor. At the end of the 16th through 17th centuries they started to feature elaborately open worked shields and increasingly complex and flamboyant chiseling that became known as typical for south Indian arms.3

Of special interest on these early ones is the cusped arch at the transition between blade and shield, inspired on the cusped arches seen on Vijayanagara architecture. All of the early examples seem to have a cusped arch, a common shape of archways in the Vijayanagara. This example, with its pointed arch, reminds more of Islamic architecture. The influence of these styles increased over the 17th century, but we do already see such Islamic style arches in the city of Vijayanagara which was overrun in 1565 and never rebuilt. This means that despite the hostility between the Islamic north and Hindu south at the time, these arches were already a common motif on royal Vijayanagara buildings around the mid 16th century.

All considering, it is safe to say that this katar most likely dates from around the late 16th century.

The following images compare these katar with elements of Vijayanagara architecture. These are ruins of the city of Vijayanagara as photographed by Colonel Alexander J. Greenlaw in 1856. The city was overrun in 1565 and abandoned since, showing that Islamic influence was already apparent in Vijayanagara before they lost their capital to the Deccan Sultanates. A very rare Vijayanagara katar of the 16th century. It is of solid workmanship throughout, and in good condition for its age. Only minor wear and tear and no losses or loose parts. Most of these have since long found their way to museum and private collections, this is a rare chance to own one of this quality and condition.