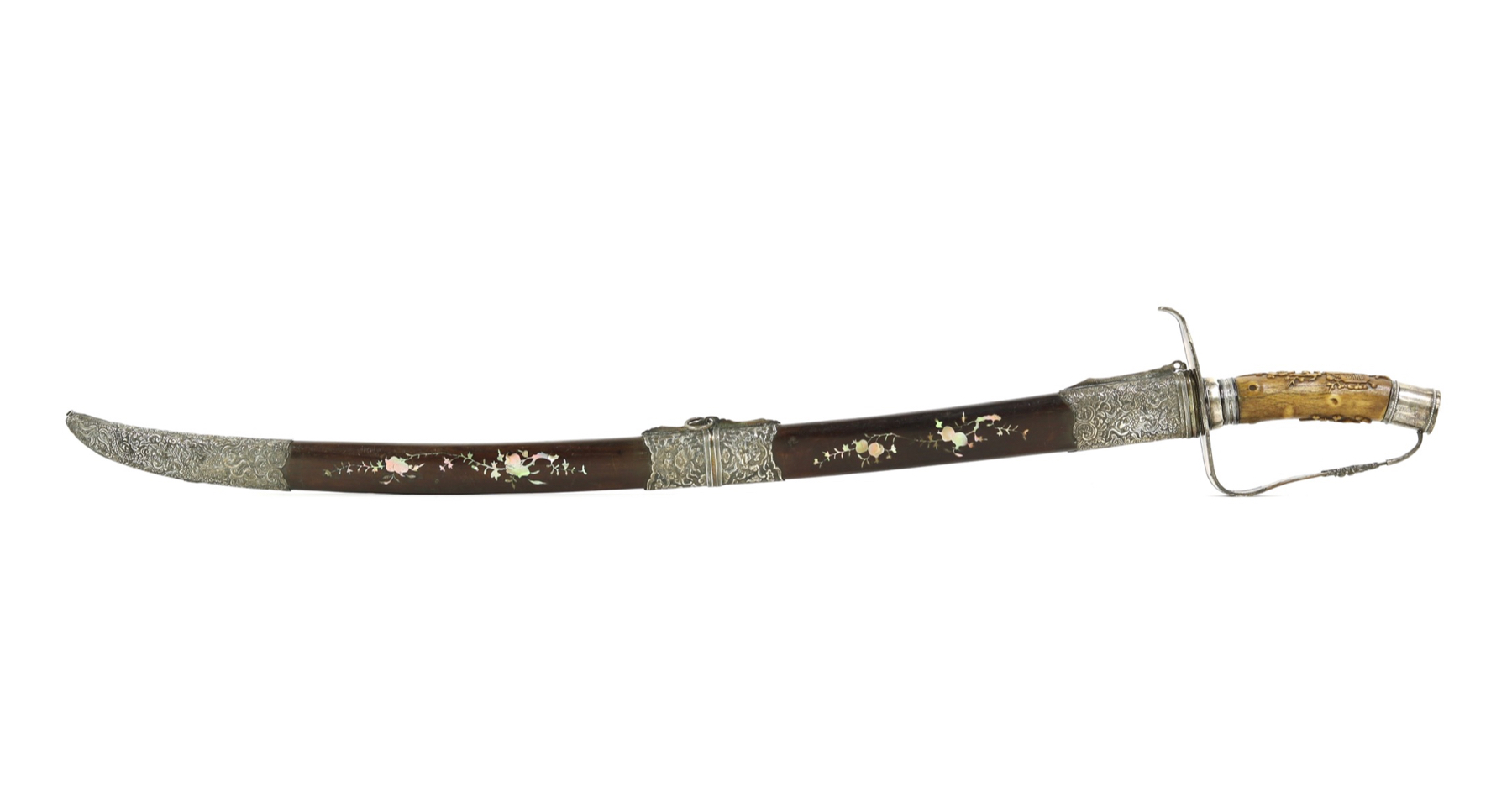 Antique Vietnamese sabers come in three main varieties: Ornamental pieces that were emblems of rank that were carried during processions, ornamented pieces with good blades carried by officers, and simple soldier's fighting pieces. Here is an ornamented officer's saber with live blade.

Of long and slender form with a gradual taper over its length, reminiscent of saber forms seen on Ming artwork. It has a wide main groove that is flanked by a narrow groove on top, with an engraving that wraps around the main groove at the base and turns into a floral spray rendered in typical Vietnamese fashion. A similar engraving connected to the narrow groove is seen near the tip. The blade is of good steel but carries scars of use, among which a fairly big nick at the tip. It has a brass ornamental collarpiece and a silver washer.

The hilt consists of a carved stag horn grip that is shaped as if it is an old stump of wood. It is further embellished with high relief carvings of blossoming plum, admired for its ability to withstand the cold and the symbol of the gentleman. On the back two plaques are carved with stylized longevity symbols in them. The carving is of very good quality, and the aesthetic is reminds of that of the southern Chinese scholar's garden.

It has a thick copper D-shaped guard with silver lining. The guard is further inlaid, inside and outside, with floral patterns. Near the bottom of the guard at the pommel is inlaid "長生", Chinese for longevity.

Ferrule and pommel are made of silver plate. The ferrule has the typical Vietnamese shape with a notable swelling near the grip. It is ornamented with bands of fine braided silver and two darkly patinated bands of copper alloy, similar to Japanese shakudo. The pommel is a simple cylindrical shape with ornamental bands of silver. The dark blue tarnishing on the hilt mounts suggest a high purity of silver.

The hardwood scabbard has three mounts in silver, worked in repousse with Vietnamese dragon, clouds and floral motifs. The panels between the mounts are inlaid with mother-of-pearl in a more simplistic fashion as is common in the lavish ceremonial sabers. The theme mimics that of the grip, being plum branches and blossoms, and plums.

Minor wear and tear throughout, including some denting on the silver mounts but with only very minor losses, see photos. One substantial nick in the blade. Some movement in te hilt.

A somewhat more unusual Vietnamese officer saber with a staghorn hilt that looks like something you would find in a southern Chinese scholar's garden. The entire piece carries references to the plum, a winter hard plant, and longevity. Unlike most, it has a good fighting blade that was clearly put to use. 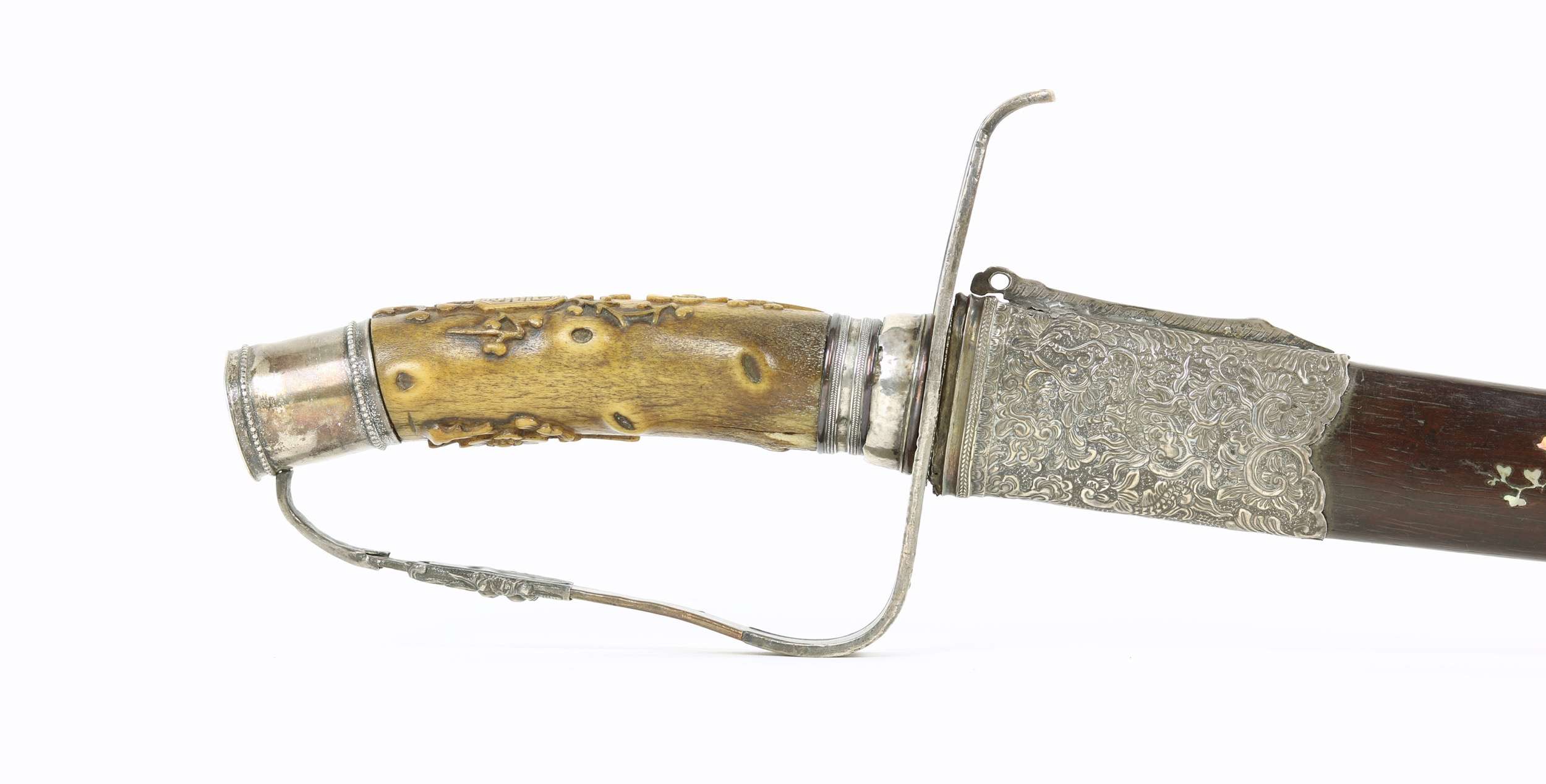 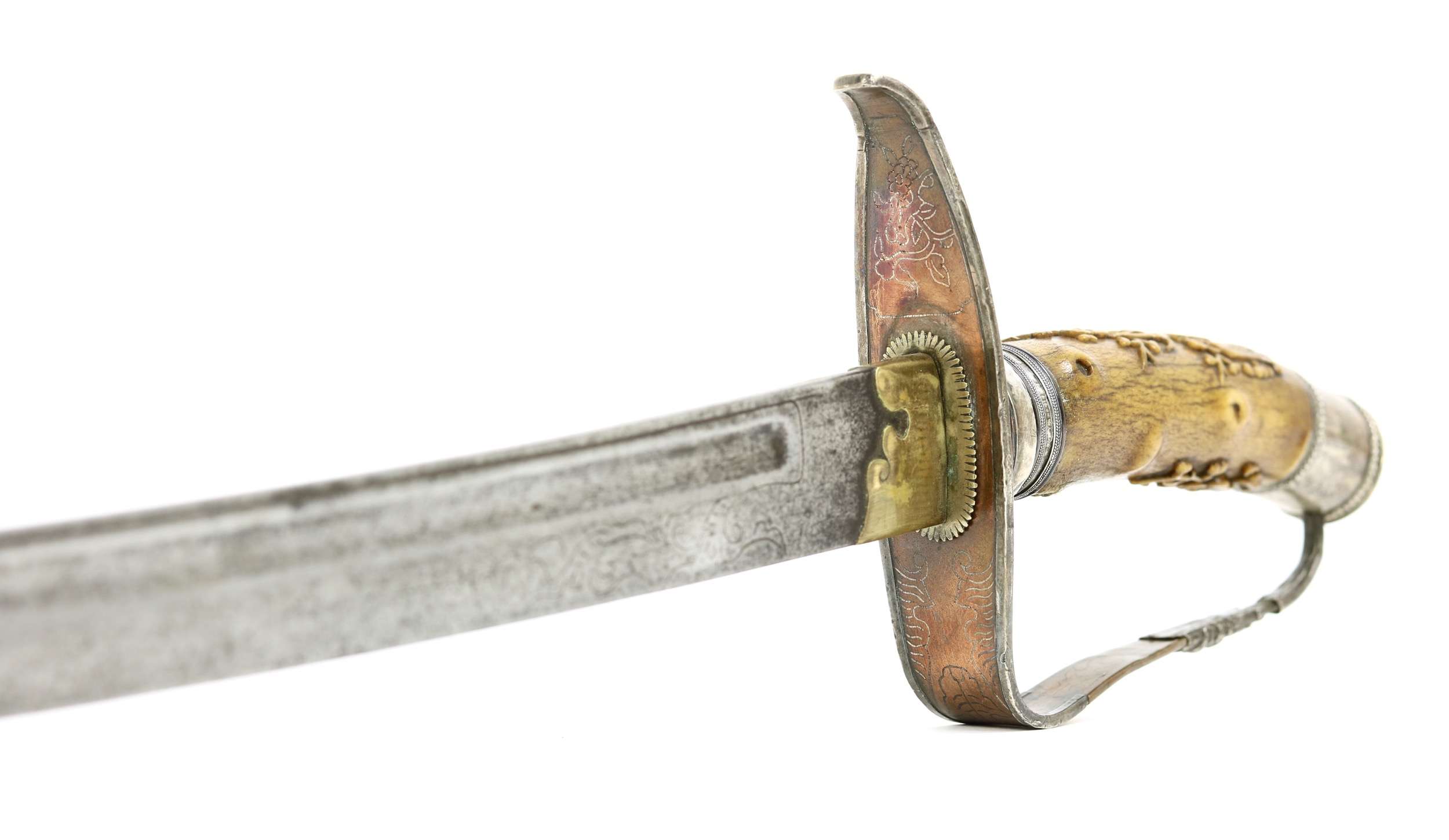 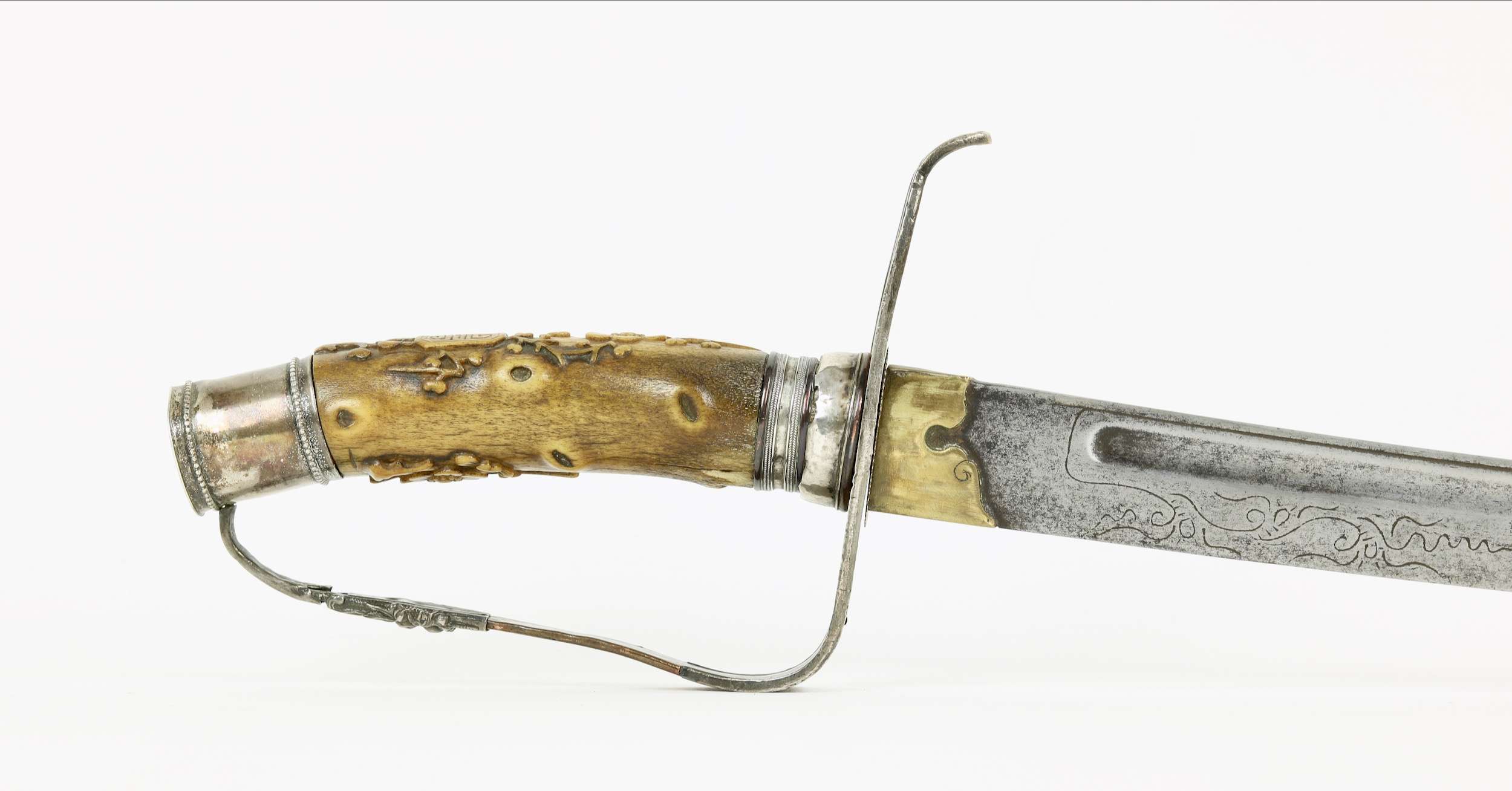 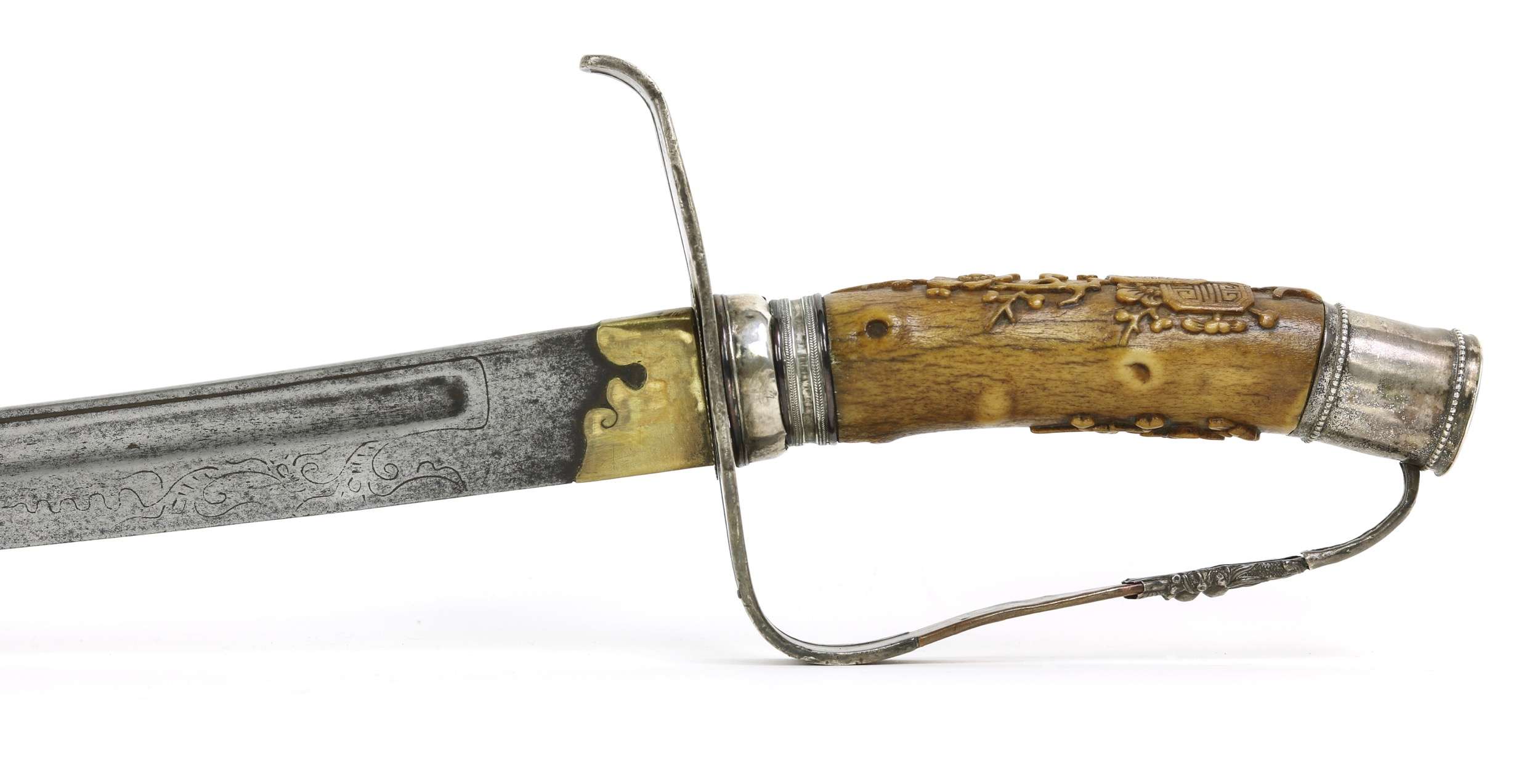