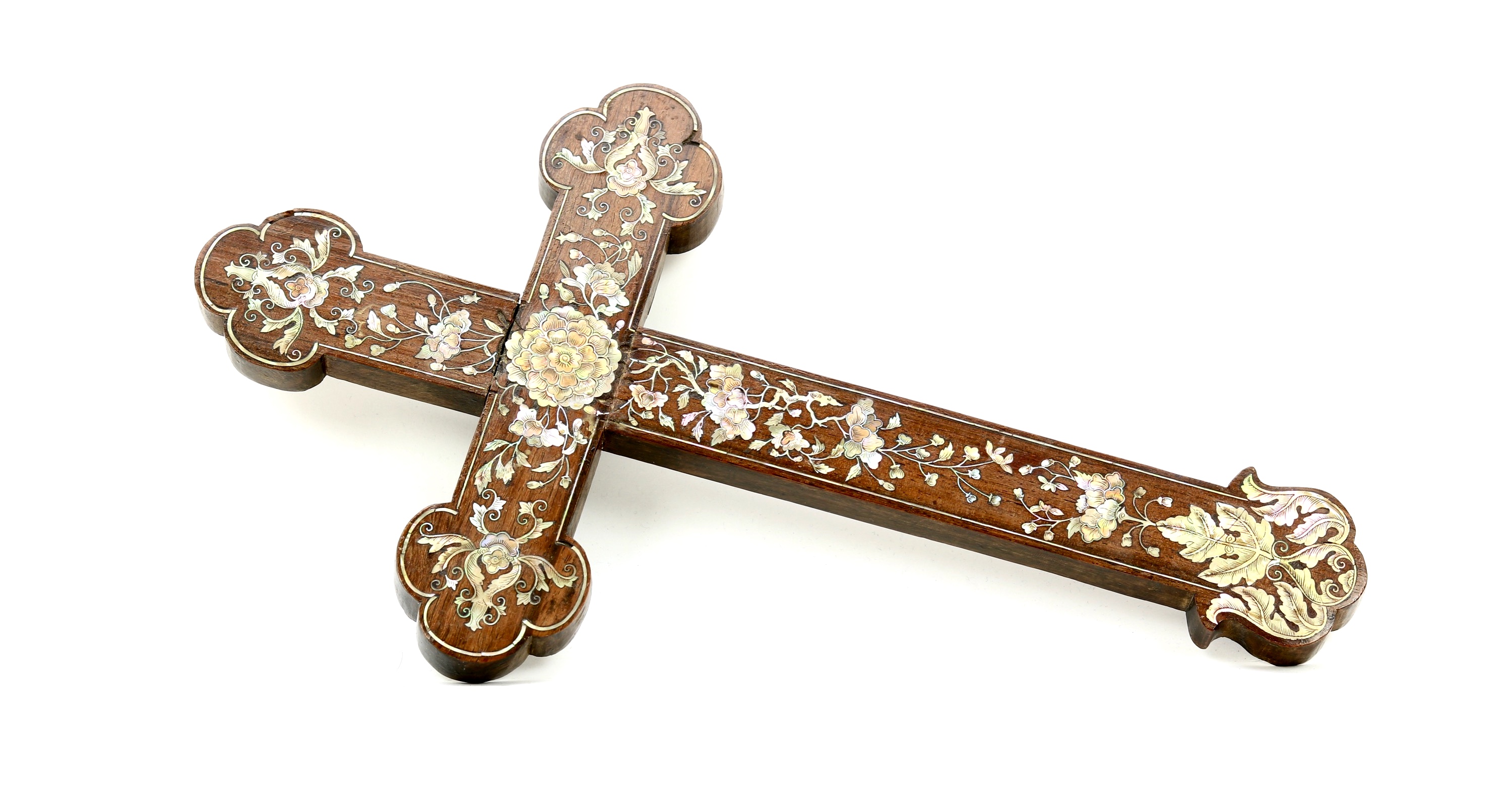 A number of Christian crosses have turned up over the years that were made of dark hardwoods with fine mother-of-pearl inlays. They have featured in high-end sales from auctioneers like Christie's, Sotheby's, and upmarket dealers and are often described as "mother-of-pearl inlaid apostle cross".

Surprisingly, they are almost invariably attributed to 17th or 18th century Macau where, granted, there was quite a Christian presence. This (mis)attribution seems to be based on an example owned by a well-known Tokyo based dealer Sakamoto Goro, which was exhibited in the Kyushu National Museum in 2005 and describes as being from Macau.1

However, anyone who is familiar with Vietnamese ceremonial swords and sabers will instantly recognize the work on these as being from the Nguyễn dynasty. Meaning, northern Vietnamese, and 19th century. Compare for example to a saber made by Nguyen Ngoc Cat in 1895.2 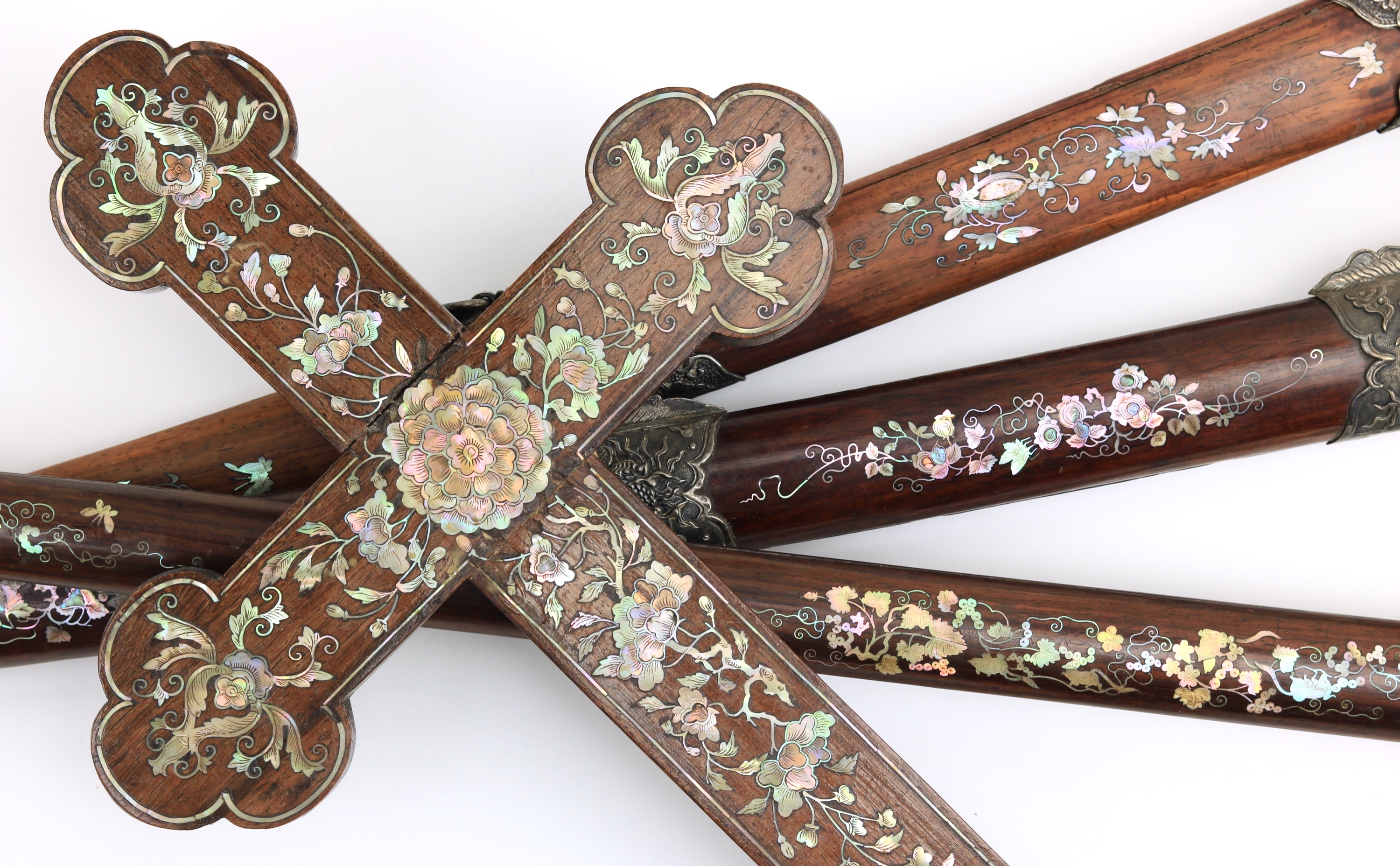 This cross shown on top of three Vietnamese ceremonial scabbards of the Nguyễn dynasty.
(See the kiêm listed here and the gươm listed here.)

The first Christian missionaries arrived in Vietnam in the 16th century, mostly Catholic Spanish and Portuguese. The first Nguyễn emperor, Gia Long ( 1802–1820) had good relations with Christians and allowed the faith to flourish, partly because European troops had aided his victories in the establishment of his dynasty. By 1820 there were as many as 300.000 Christians in Tonkin, northern Vietnam. His son and succesor Minh Mạng (reigned 1820-1839) however was deeply opposed to Catholicism, as he strongly favored orthodox Confucianism. Persecution of Christians followed, as did various unsuccesful revolts lead by pro-Catholics both European and Vietnamese in attempts to topple his rule.

During the French colonial campaign of 1858-1883, many local Catholics joined the colonial forces, which eventually lead to the establishment of colonial rule and diminisching the Nguyễn imperial line to a ceremonial purpose only. From this moment onwards, Catholics received an elevated status in society and many imperial posessions and lands moved to Catholic hands.

A nice example made of a dense, dark brown hardwood, meticulously inlaid with mother-of-pearl. The center of the cross is decorated with a large rose, symbol of the Virgin Mary. Each end of the cross has a trilobed shape, referring to the holy trinity; The Father, The Son, and the Holy Ghost.

Each end is inlaid with European style acanthus leaves, while the rest of the cross is decorated with more traditional Vietnamese interpretation of blossoming shrubs.

In relatively good condition, with only minor losses. The biggest losses occur at the junction between the two pieces of wood, this is almost always the case on these and was a result of the wood slowly shrinking over time, popping the inlays out. Further, minor losses are seen in the thin line that goes around the edges, most notably in the top three extremeties.

Like mentioned in the introduction, some of these were offered by high-end dealers and auctioneers as being much earlier and from Macau.

One example was sold by Christies London in 11 May, 2015 for a staggering 27500 GBP.
This was obviously a freak result, as they are not nearly as rare as to justify this kind of pricing.

In November 2019, Sotheby's tried their luck with a similarly misattributed cross, described as A morther-of-pearl inlaid cross, Qing dynasty, 18th/19th century. The estimate was 6000-8000 GBP but buyers were smarter this time and the lot went unsold.

A nice example of a Nguyễn dynasty Christian cross, showcasing the kind of fine mother-of-pearl work that Vietnamese workers are famous for. They are quiet witnesses to a very turbulent past of the religion in Vietnam. These crosses are frequently misattributed, and as a result often mis-priced. Here is an opportunity to purchase one correctly described and, not unimportantly, more favorably priced. 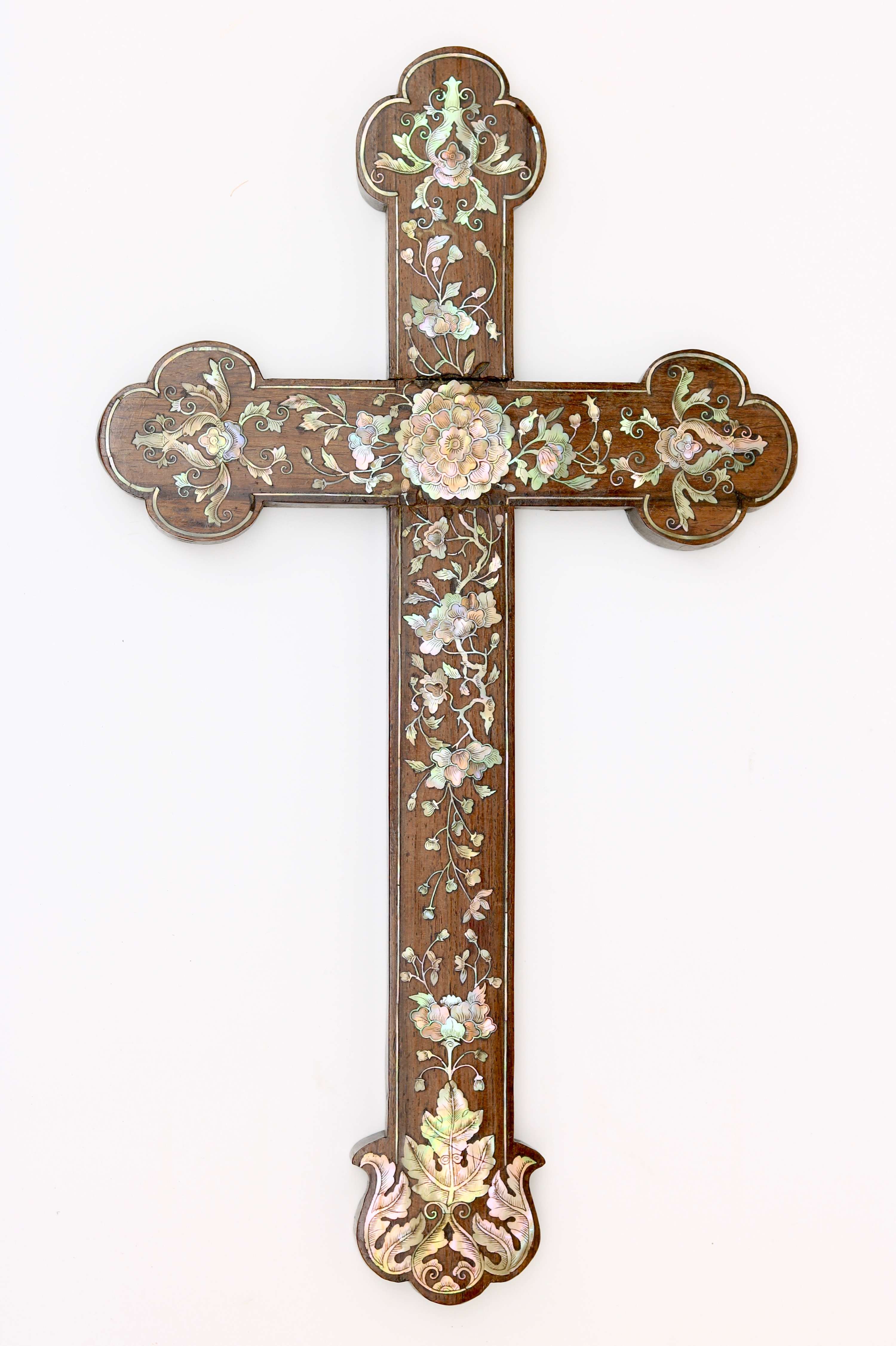 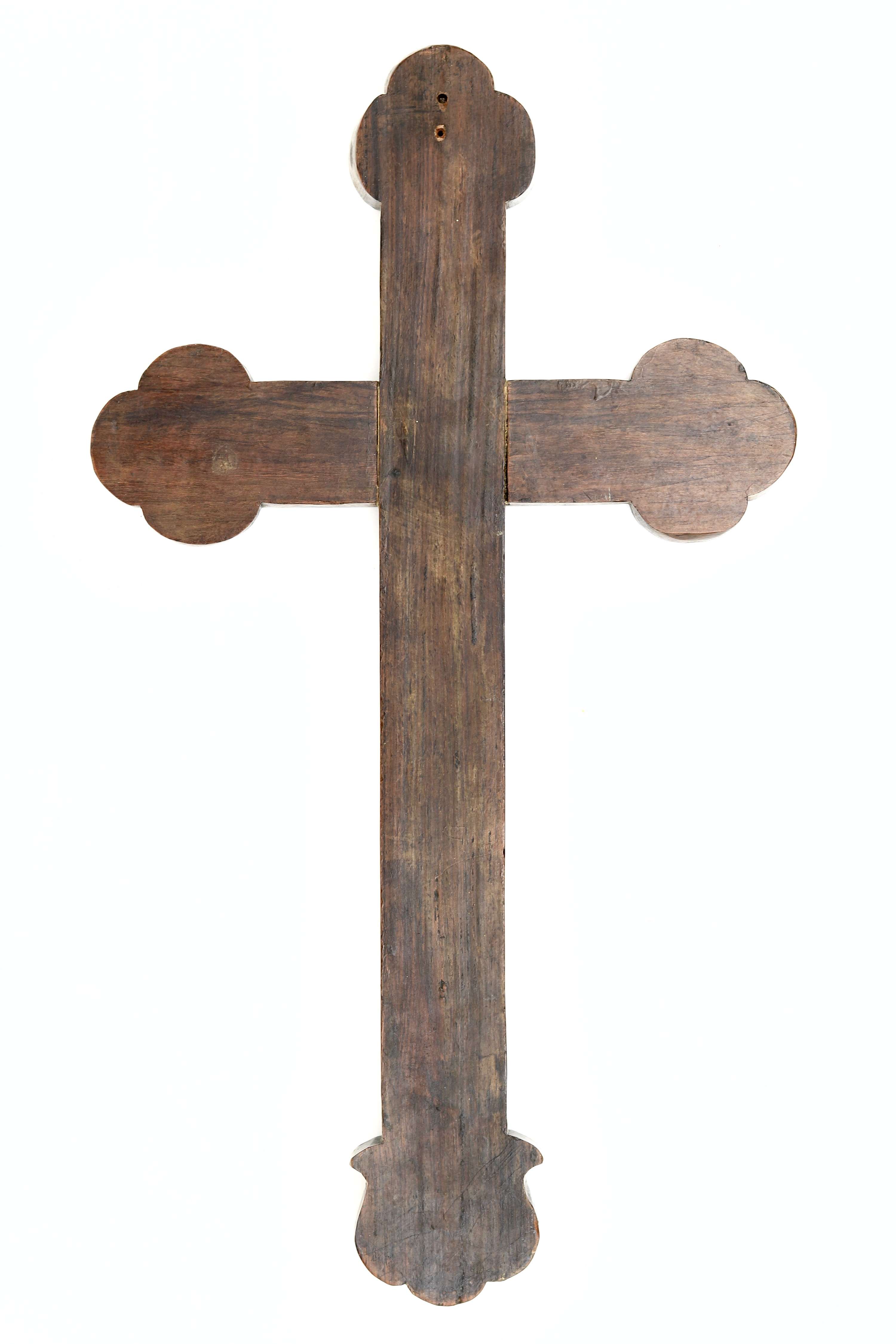 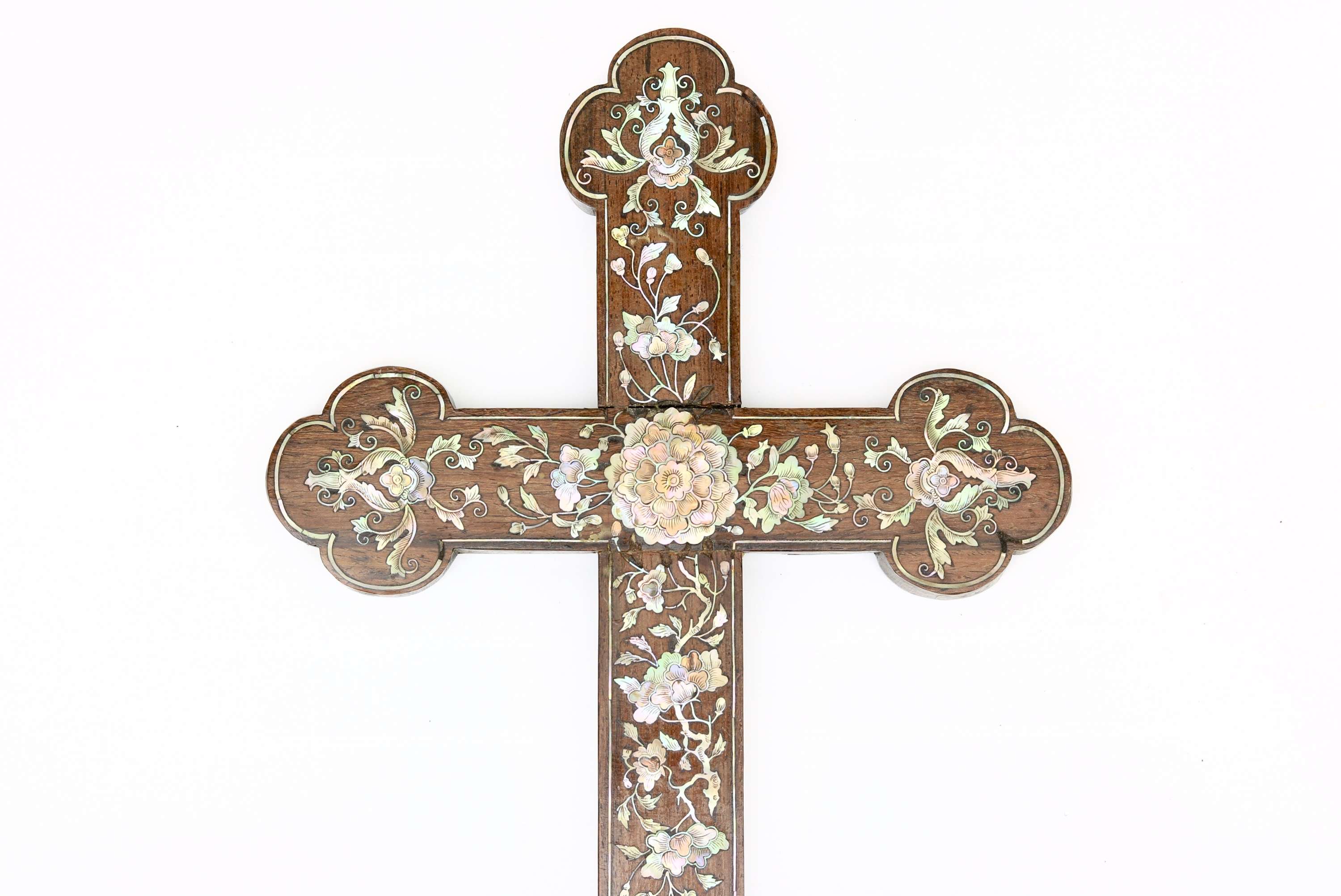 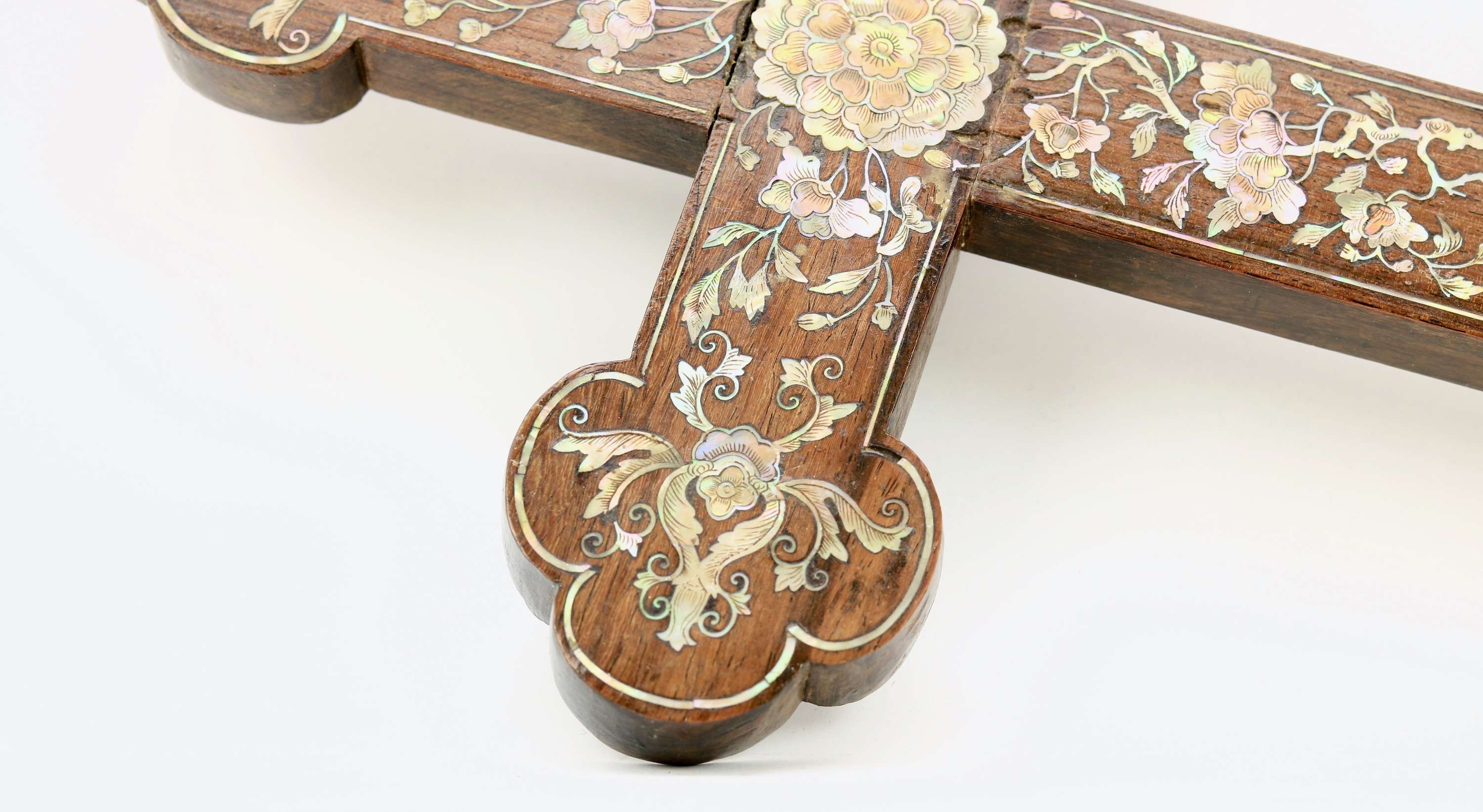 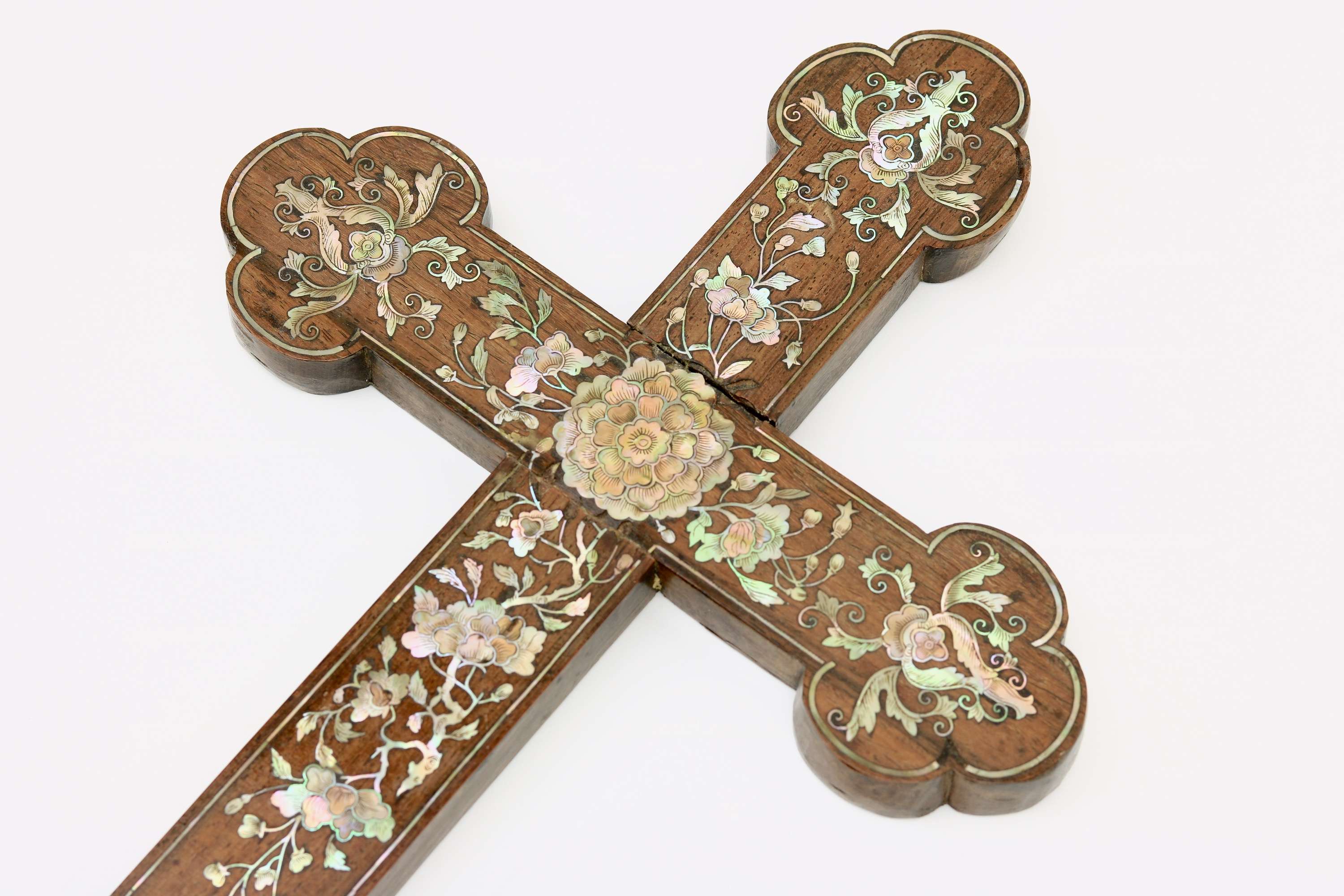 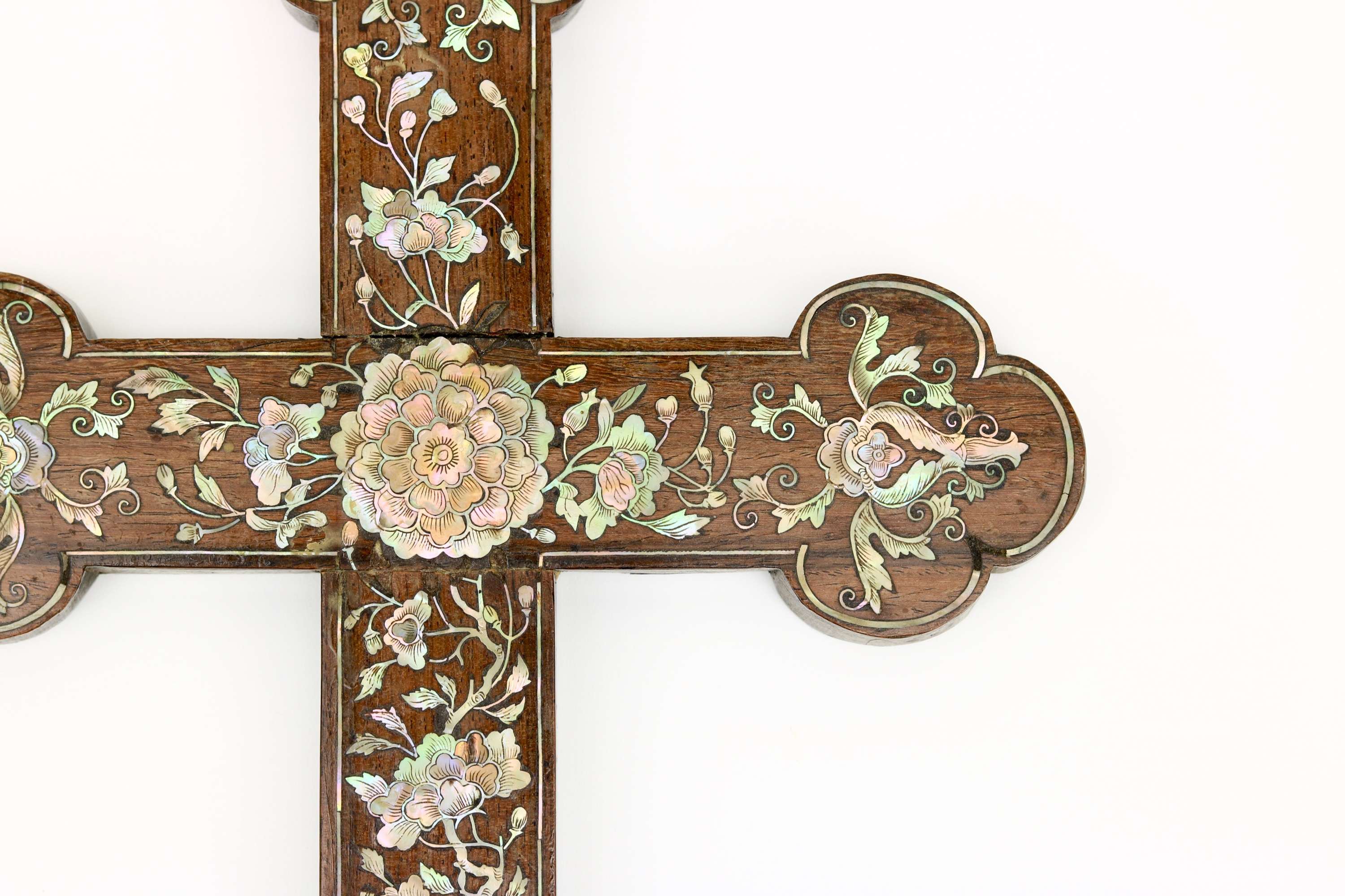 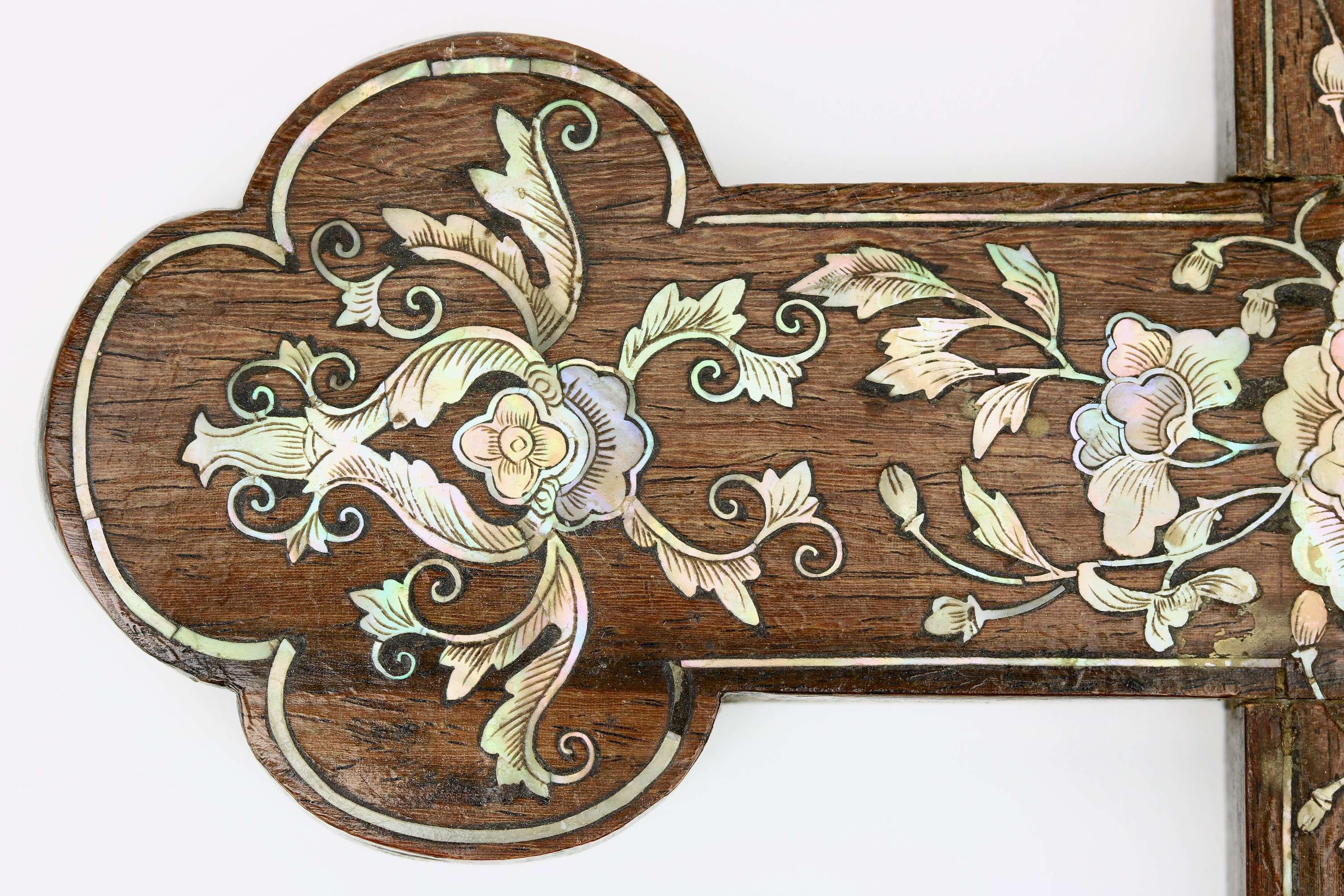 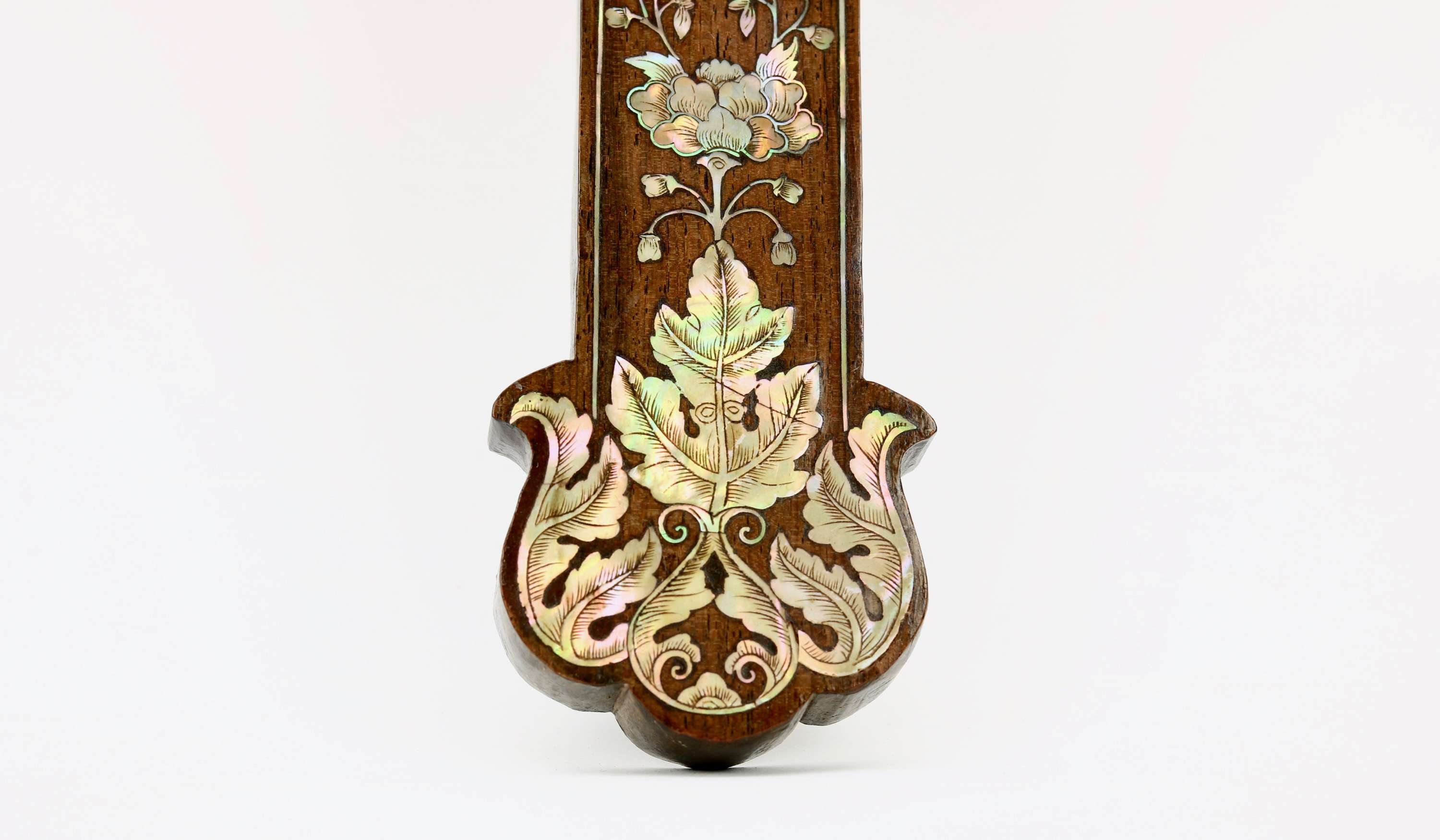 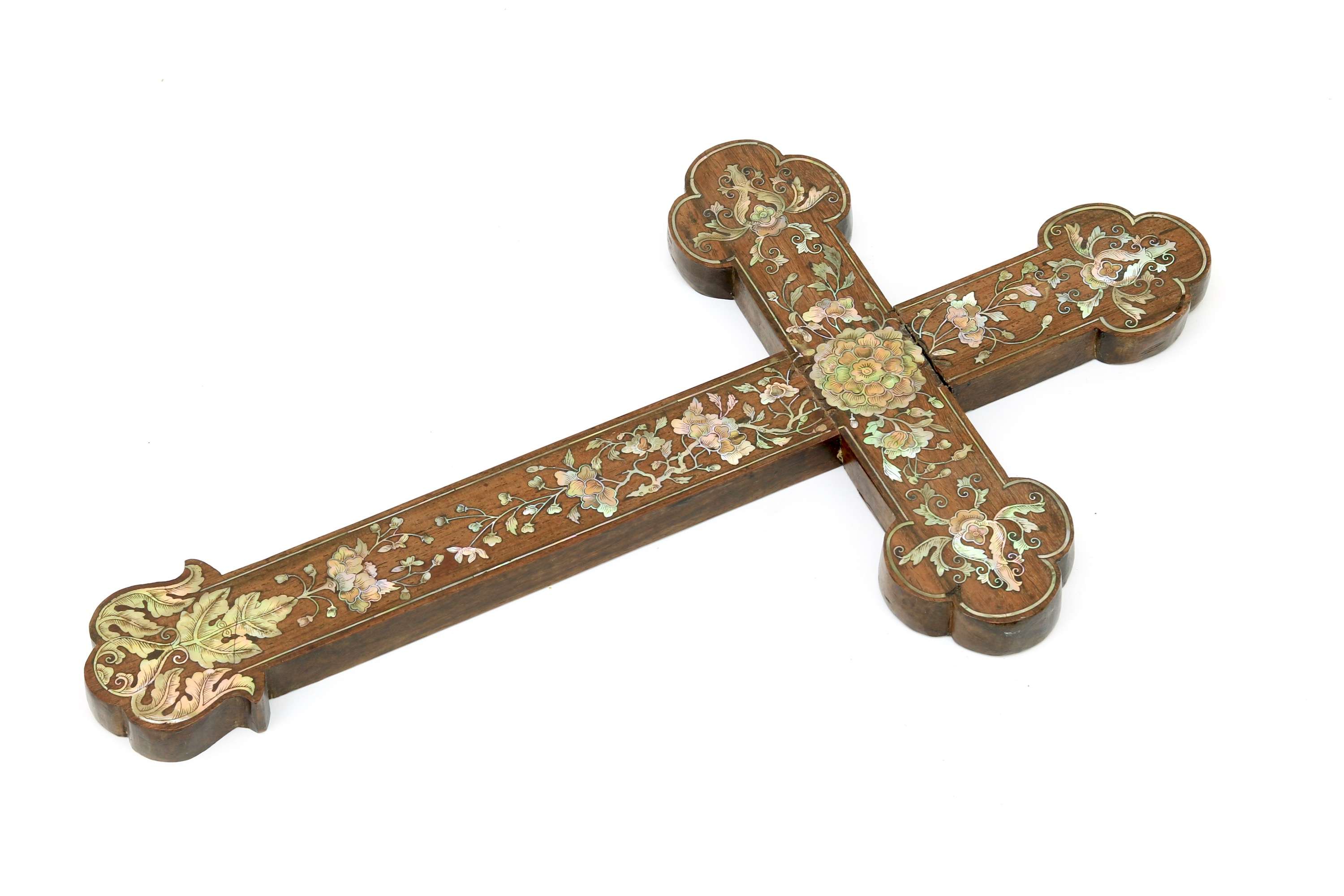