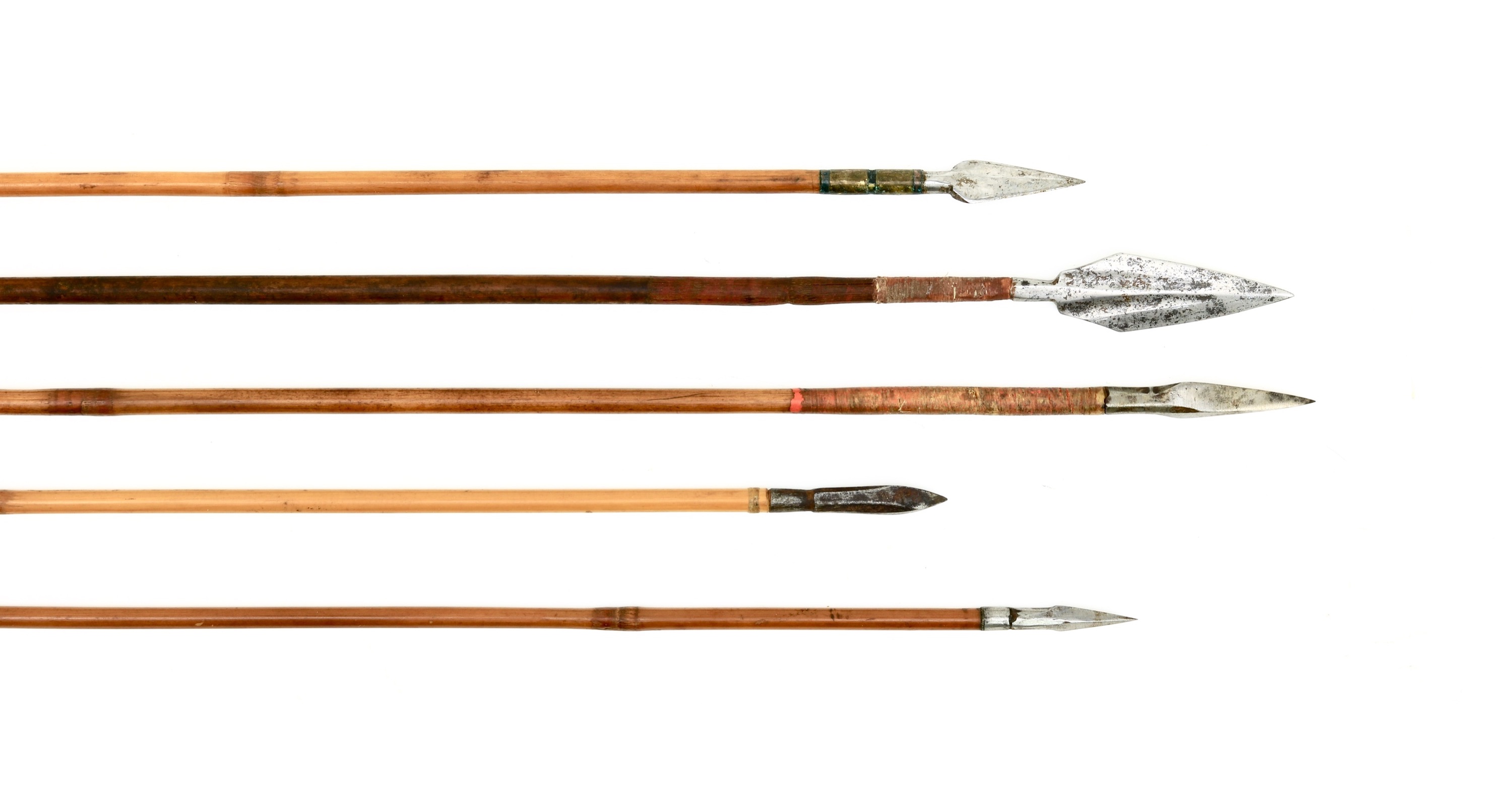 The Hindi word for arrow is bāṇ (बाण). In northern India, where these arrows are probably from, arrows were called tīr (तीर), derived from the Persian tir (تیر). According to A dictionary, Hindūstānī and English by Shakespear, arrow shafts were made from Saccharam Sara, a synonym of Saccharum bengalense, a type of bamboo grass.1 They are often well-made and come in a large variety of types.

A set of five assorted Indian arrows, each representing a piece that originally came from its own set. Within a set, the cresting at the tail would always be identical or at least very similar, and these all differ. Also the lengths differ, indicating that they were most likely made for different bows shot at different draw lengths.

The shaft lengths below are all measured the standard archer's way, from the base of the head to the nock's hollow.

Let's start with the best arrow of the set. It has a relatively thick and heavy triangular blade with pronounced center ridge and secondary edge bevels. The tanged head is seated in its bamboo shaft, the foreshaft reinforced with copper and brass rings.

The shaft itself is beautifully painted at the tail end, which ends in a classic wooden bulb nock. It was once fletched with three feathers, only part of the rachis remaining. 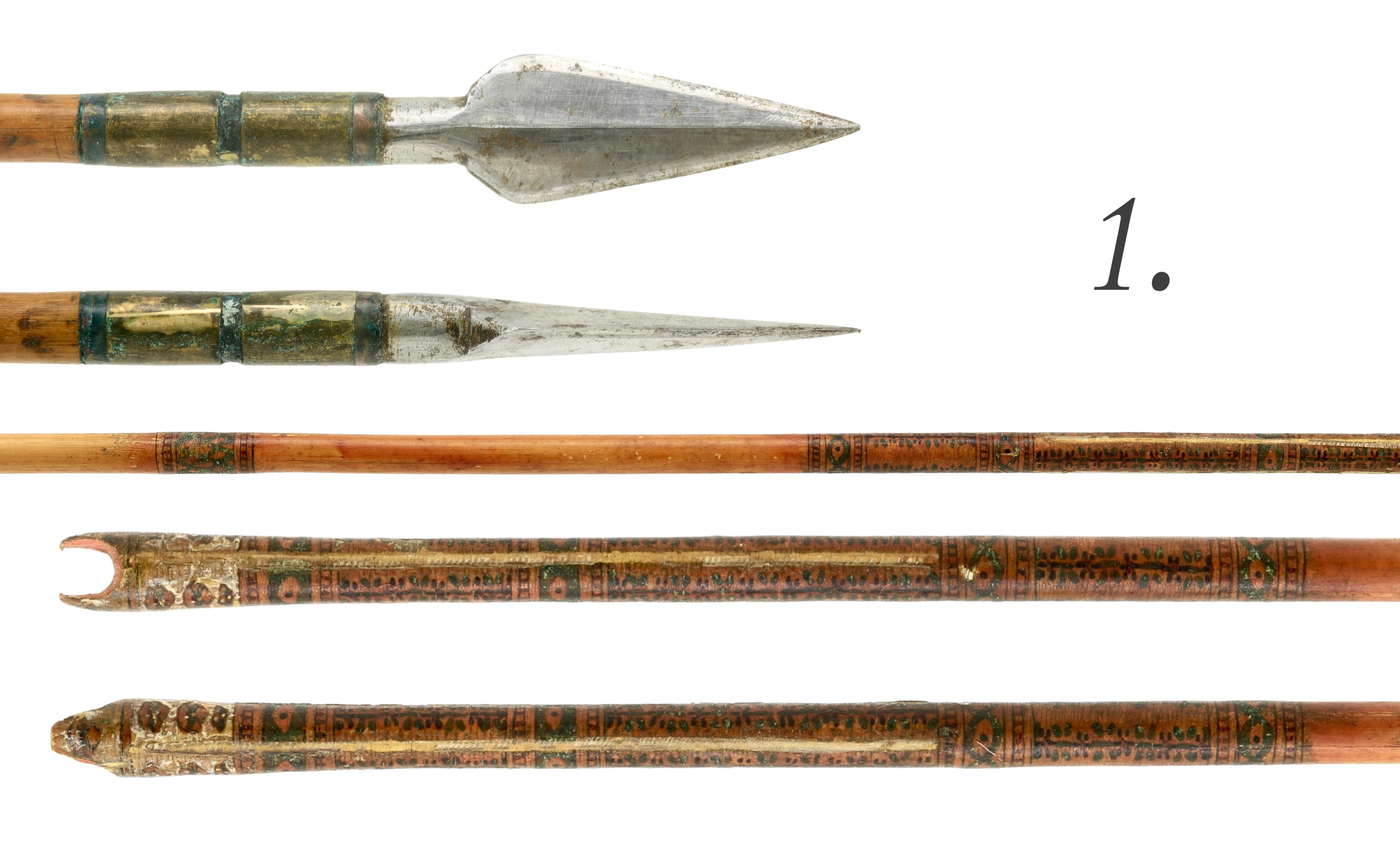 A rarer type of Indian arrow with a very large and wide broadhead. Four groove give the large blade some lightness to improve range and speed. Such heads can do a lot of damage, but do not fair well against armor. They were most likely be used for hunting, or shooting at unprotected targets.

Its shaft, darkly patinated with age, is reinforced with sinew wrapping on either end. At the tail is inserted a wooden bulbous nock, and there is some painted decoration. Some splits in the shaft due to drying of the materials. 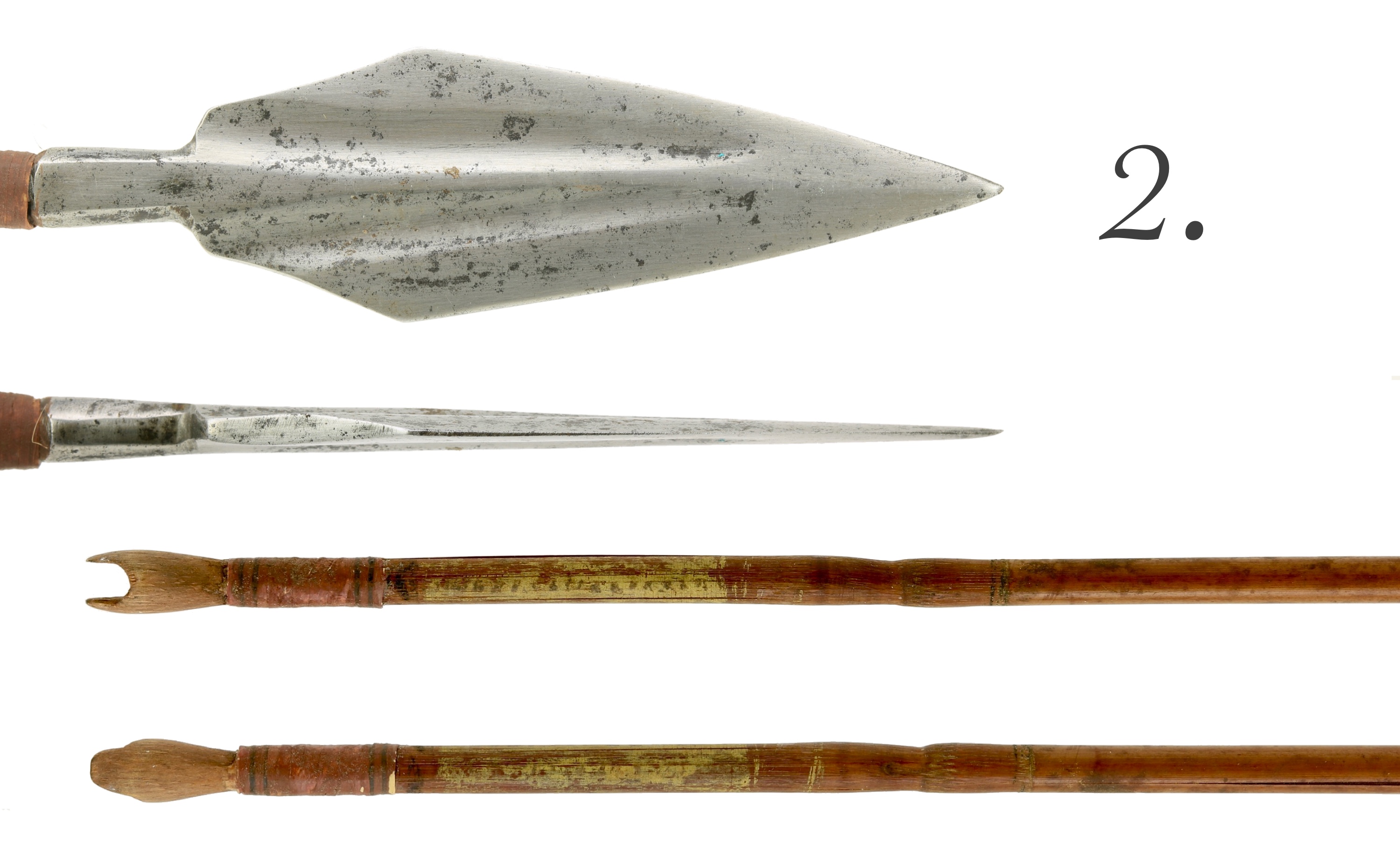 This arrow has a very thick and heavy bodkin type point, optimized for armor-piercing. Its bladed part has a flattened diamond cross-section while the neck of the head is facetted with an octagonal cross-section.

The simple unadorned shaft is reinforced with sinew wrapping on both ends, with some sinew wrapping being loose on the tail end. Remains of feathers on the shaft indicate it was once fletched with four rather short feathers.

Interesting fact: some believe that four-fletched had the added advantage that the archer didn't need to look at the arrow while nocking to prevent the cock feather from rubbing against the bow. In this case, the theory falls apart: two feathers are in alignment with the nock, and two at right angles with it. So no matter how you turn it, one feather will be pointed directly towards the bow handle. Some 14th-century arrows found at the Chagaan Khad in Mongolia were also fletched like this.

The balance is quite far back, which is strange, to say the least, because the head is so heavy. Running a magnet along the shaft I found a long tang but nothing magnetic past the balance point. Perhaps heavier inserts of another material pulled the balance back. 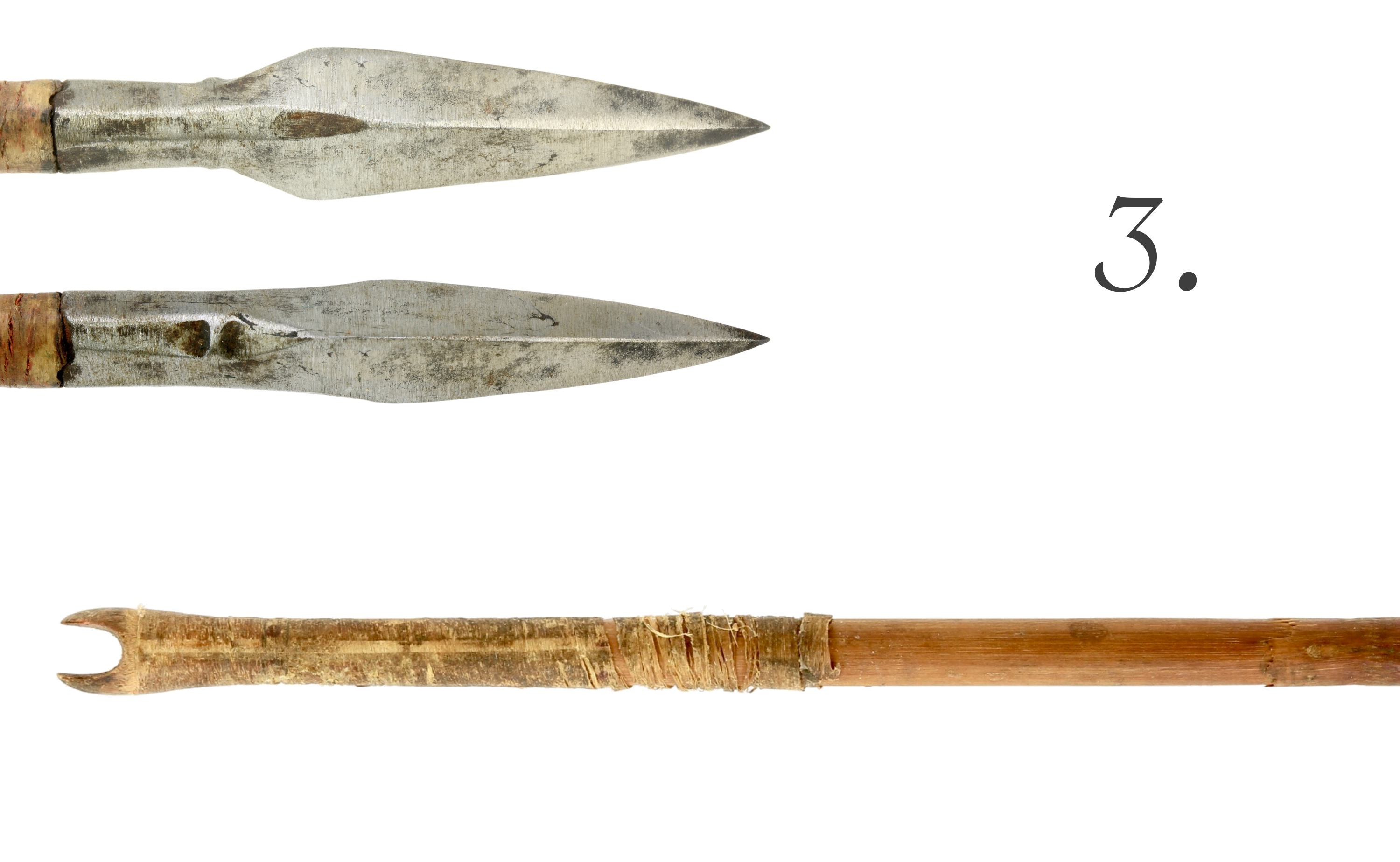 Another armor-piercing arrow. This one with a somewhat lighter head than the previous one, but of very refined shape. It has a bullet-shaped profile with steep edges that meet at a four-edged bodkin like tip section. The head it designed to punch a relatively big hole through this the rest of the arrow can pass with minimal friction.

Its shaft has some sinew reinforcement right behind the point. The tail end is spliced, with a longer piece of wood inserted, its joined hidden under sinew wrapping that was painted. At the end is a bone nock of somewhat unusual shape, it seems designed to tightly grip the string. A quality piece, exhibiting fine workmanship.

The point of this arrow can gently be taken out to inspect the tang.

(Again, the balance is quite far back.) 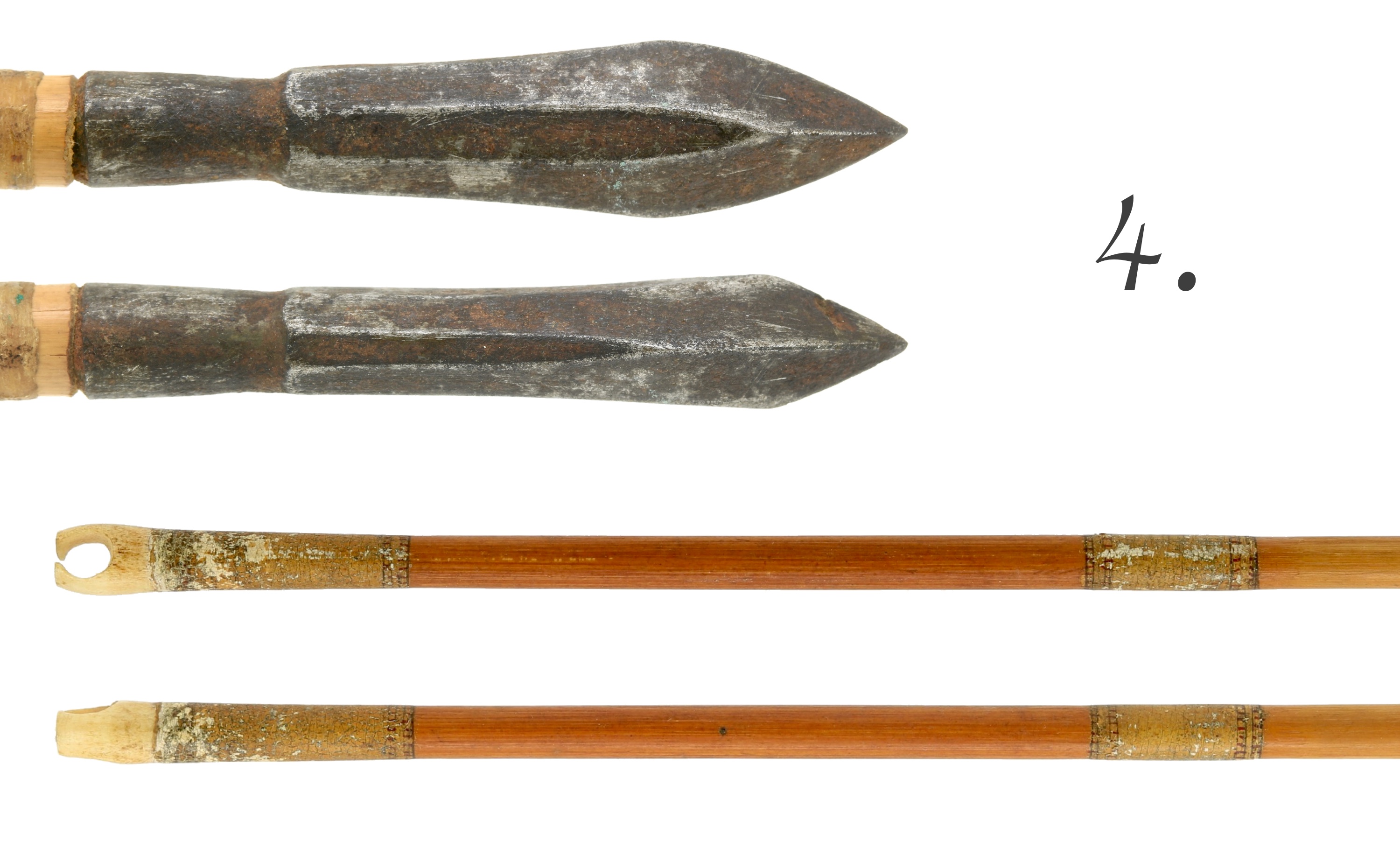 A relatively small Indian war arrow. It has a small double-edged tip, of general armor-piercing shape but also narrow enough to slip through the rings of a mail vest. It's reinforced behind the head with a steel washer. It is quite light and seems built for speed and range.

The shaft's tail end is completely reinforced with sinew and painted over. It has a bulbous nock and remains of three fletchings. 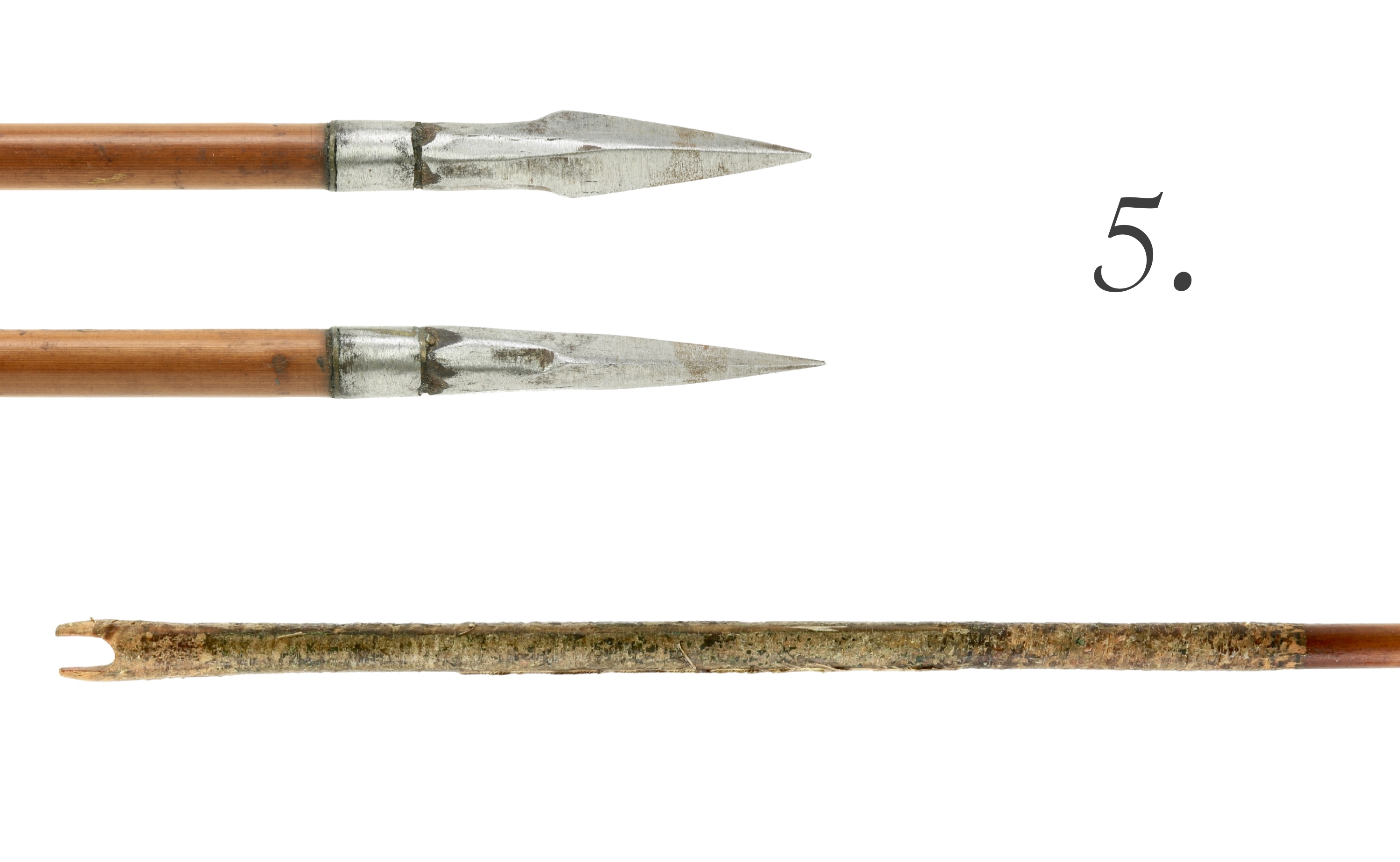 An interesting ensemble of Indian arrows, each with its own distinctive features. The student of the Indian archery tradition will find some interesting elements to explore in this set.