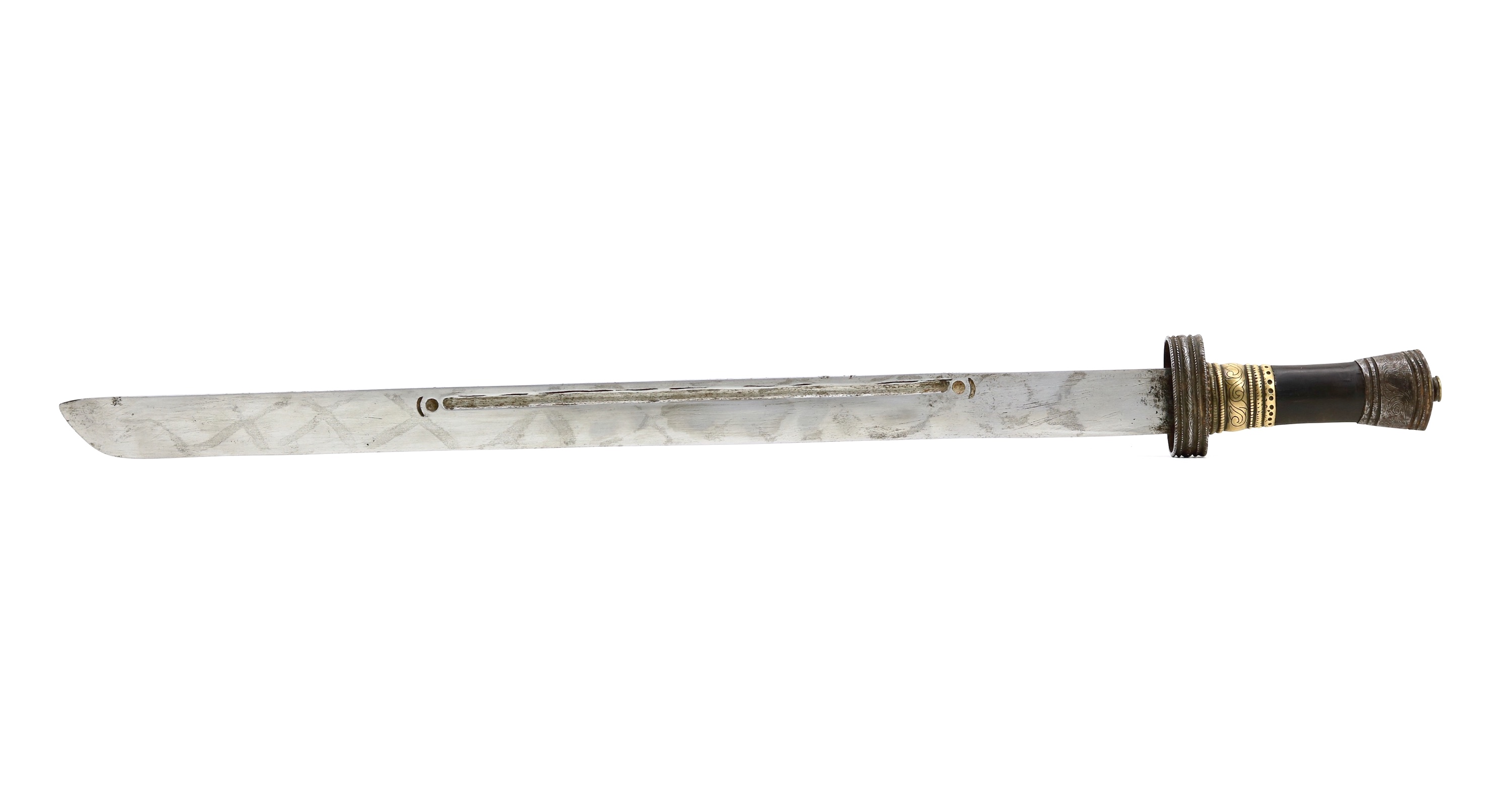 An interesting sword that came from Qinghai about 15 years ago. The straight, single edged blade reminds strongly of that found on the Tibetan dpa'dam. This example, however, has a fuller on the left side of the blade starting and ending at a sun and crescent moon symbol. Above the fuller runs a narrow groove, now partly faded due to polishing. At the point is a subtle dip of the spine, a feature also not typically seen on Tibetan swords.

Another difference with typical Tibetan work is that this piece does not exhibit the hairpin laminations often seen on Tibetan swords. Instead, the blade is bright steel with no signs of hairpin forging. Instead, there are series of X's on the blade, I count 10 of them on each side. I have not been able to determine whether the decoloration is a result of a surface treatment, or whether it represents the actual steel composition of the blade. In any case it seems very deliberate.

The guard is an iron oval cup-guard with a rather high rim, constructed out of plates that were soldered together with brass and copper. The thick rim is decorated on the outside with a series of raised bands. The smaller outside bands are engraved as to resemble rope or cord, the wider center band is engraved with a representation of stylized water. Between guard and grip is a copper washer that reminds vaguely of a Japanese seppa.

The ferrule is brass, again decorated with rope-like bands and a center, wideband that is engraved with highly stylized scrollwork. The lowest band is perforated with a series of holes. The grip section itself is made of black water buffalo horn. The iron pommel is similarly decorated, also with a center band with stylized floral scrollwork engravings. The tang is peened at the pommel over a brass washer.

The form of the hilt with short grip and large flaring pommel reminds strongly of Chinese saber hilts of the 17th and 18th centuries.

Sword itself probably late 19th / early 20th century. Scabbard possibly later, especially the corduroy fabric did not become popular in the region until around the 1970s.

Collected in Qinghai some 15 years ago, the unusual style of the sword suggests it did probably originate in that region. It exhibits the blend of Chinese and Tibetan design features we would expect to find in this region.

The scabbard follows the Eastern Tibetan style, having no metal U-frame as commonly seen on work from the Ü Tsang region. It is made of two pieces of wood joined together and covered with a piece of black corduroy fabric. The scabbard mounts consist of a brass throat piece and chape, each with reinforcing rings in copper on either side. The chape is adorned in the Tibetan fashion with a piece of turquoise and two pieces of coral.

An interesting and charming sword from a region whose antique arms are not yet very well documented. It exhibits an interesting mix of Tibetan and earlier Chinese features. 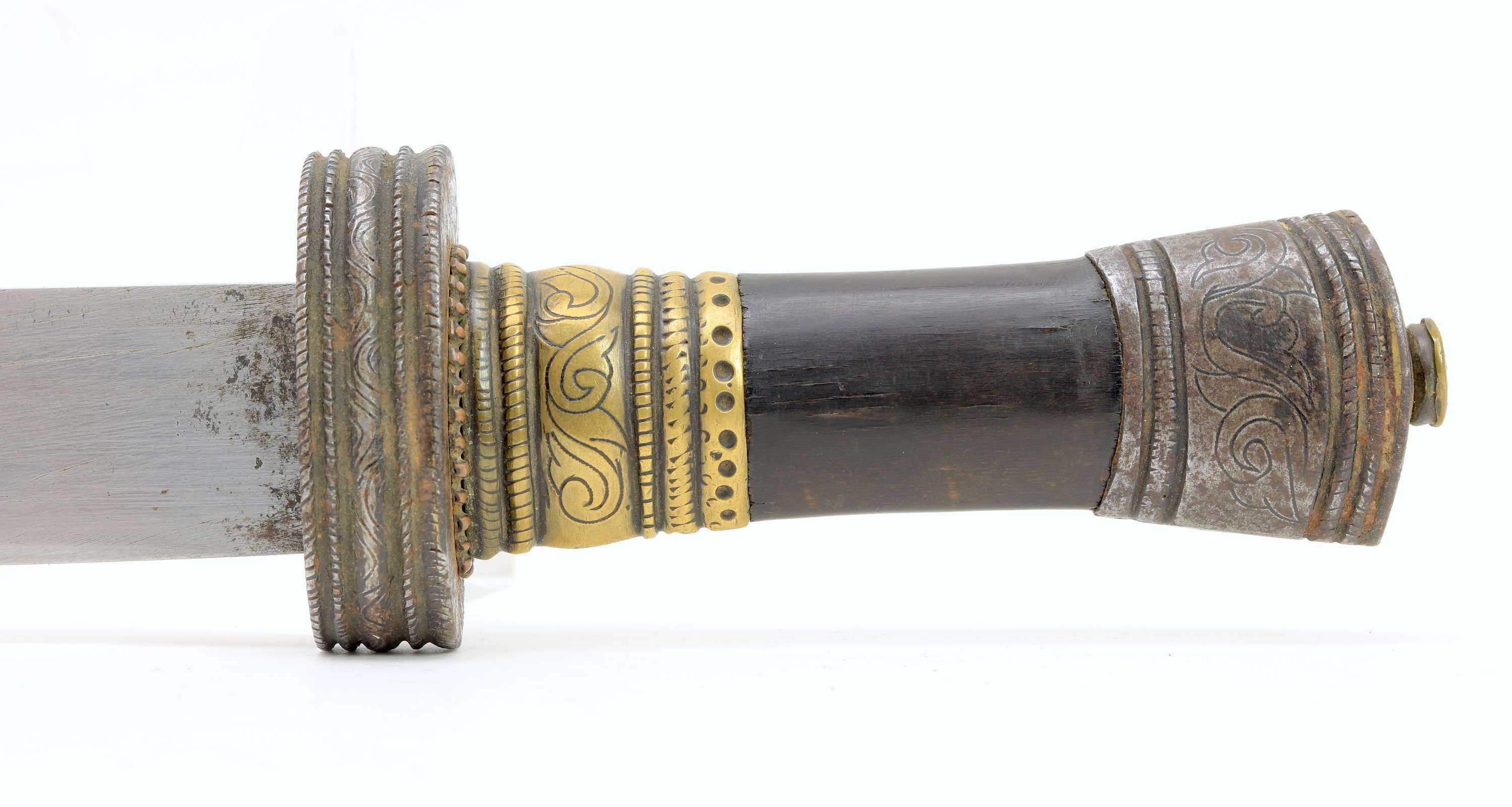 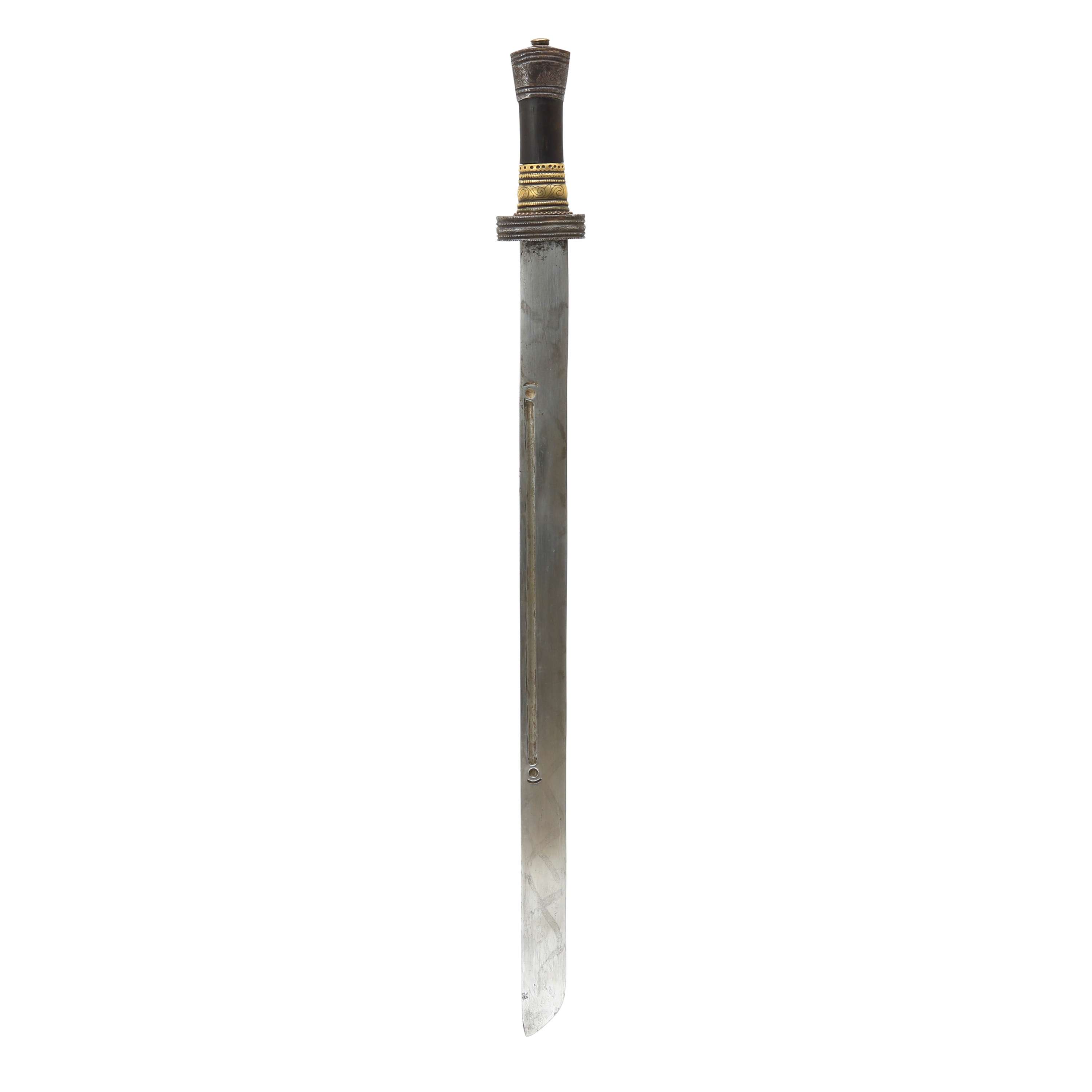