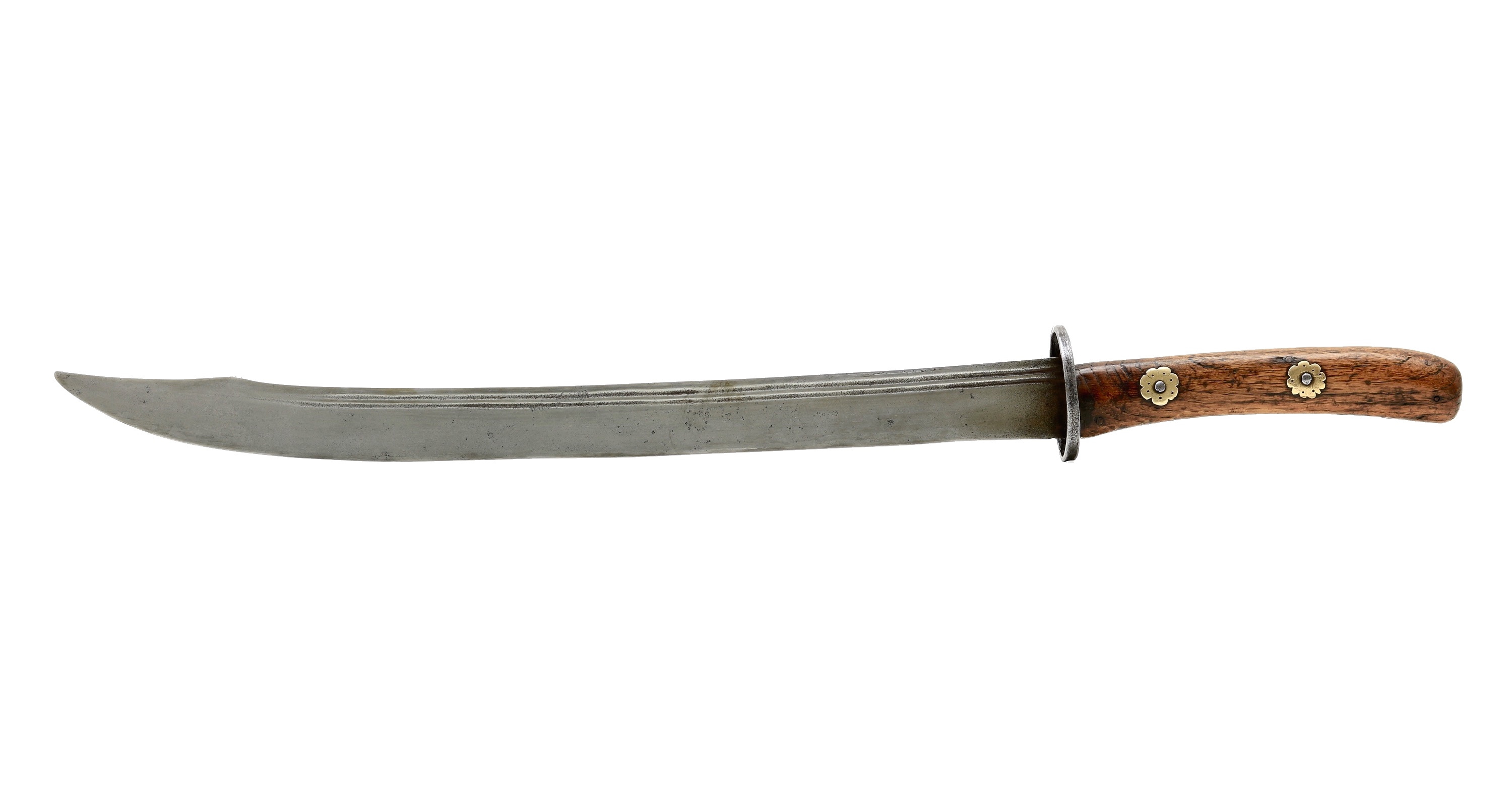 Presented in this article is a very unusual Chinese dāo (刀).

The blade's profile, with peaked back at the tip, is known as yútóudāo (魚頭刀) among collectors. It is a blade shape that on sabers is primarily associated with pretty early blades, most notably of the 17th century. The blade form did survive longer on certain pole-arms, but these blades tended to be wider overall.

The substantial blade starts out at 10mm at the base, narrowing down to 2.5 mm at the peaked spine. It has two grooves running parallel that both fade just before the peak. Somewhat unusual for Chinese sabers, the grooves start from the base already. Normally, grooves start some distance ahead of the guards. This may mean that the blade was shortened from the hilt side at some point.

The blade construction is stypical for Chinese sabers, with a high-carbon edge plate between layers of forge folded tougher iron and steel. This blade in particular has some areas showing bold layering with a high contrast between the two. The forging is very tight, with no visible forging flaws. Edge bevel shows signs of repeated sharpening sessions over the course of its lifetime.

Hilt
The hilt is something else. The forged iron guard with shallow raised rim is again rather typical for Chinese sabers, but the rest certainly is not. The grip consists of two slabs of wood that were riveted to the tang with two iron pins with brass washers. Four bamboo pins further secure both plates, a good construction because despite shrinkage of the wood over the years, the construction is still tight as ever.

Scabbard
The piece comes with a recently associated scabbard, altered to fit the blade by a previous owner. The scabbard is a standard pattern Qing military type from around 1900, missing mouth- and endpiece. It is old but does not belong to this piece, so consider it a complimentary resting scabbard with some history of its own.

What to make of it?
The blade is probably Qing military, made in the 17th or 18th century but possibly used well into the 19th century.

The construction of the hilt with its two pins and washers reminds of the method of mounting used on some northern Vietnamese pole-arms. The shape also reminds somewhat of some Vietnamese tusk-hilted swords. In handling, it feels very much like the da swords of Yunnan, Burma and other parts of mainlaind Southeast Asia. The overall shape of the grip also has some similarities with late Ming to early Qing styles, some of which remained in use longer among minorities, especially those that resided further from metropolitan areas where fashion moved quicker.

The origin of the blade is probably one of the many Qing campagns in the border area of Yunnan, Burma and Vietnam. In the early 1660s the Qing armies under lead of Wu Sangui were chasing the last Ming heir to the throne into Burma, who was killed in the process. Not long thereafter, Wu Sangui himself rebelled in an event known as the Sānfān zhī luàn (三藩之亂) ) or Revolt of the Three Feudatories which lasted from 1673 until its ultimate defeat in 1681 by the elite banner troops sent by the Kangxi emperor. In the next century, more Qing armies would be sent to Yunnan. This included the Jinchuan campaigns of 1747–1776 and the Sino-Burmese War of 1765–1769. Yunnan would also be the theatre of a series of rebellions in the 19th century. All in all plenty of events that brought many Qing military sabers into Yunnan.

My best guess is that the blade is Qing military, either produced for a local garisson or left after one of the aforementioned campaigns, which was then mounted in a local preferred hilt style. 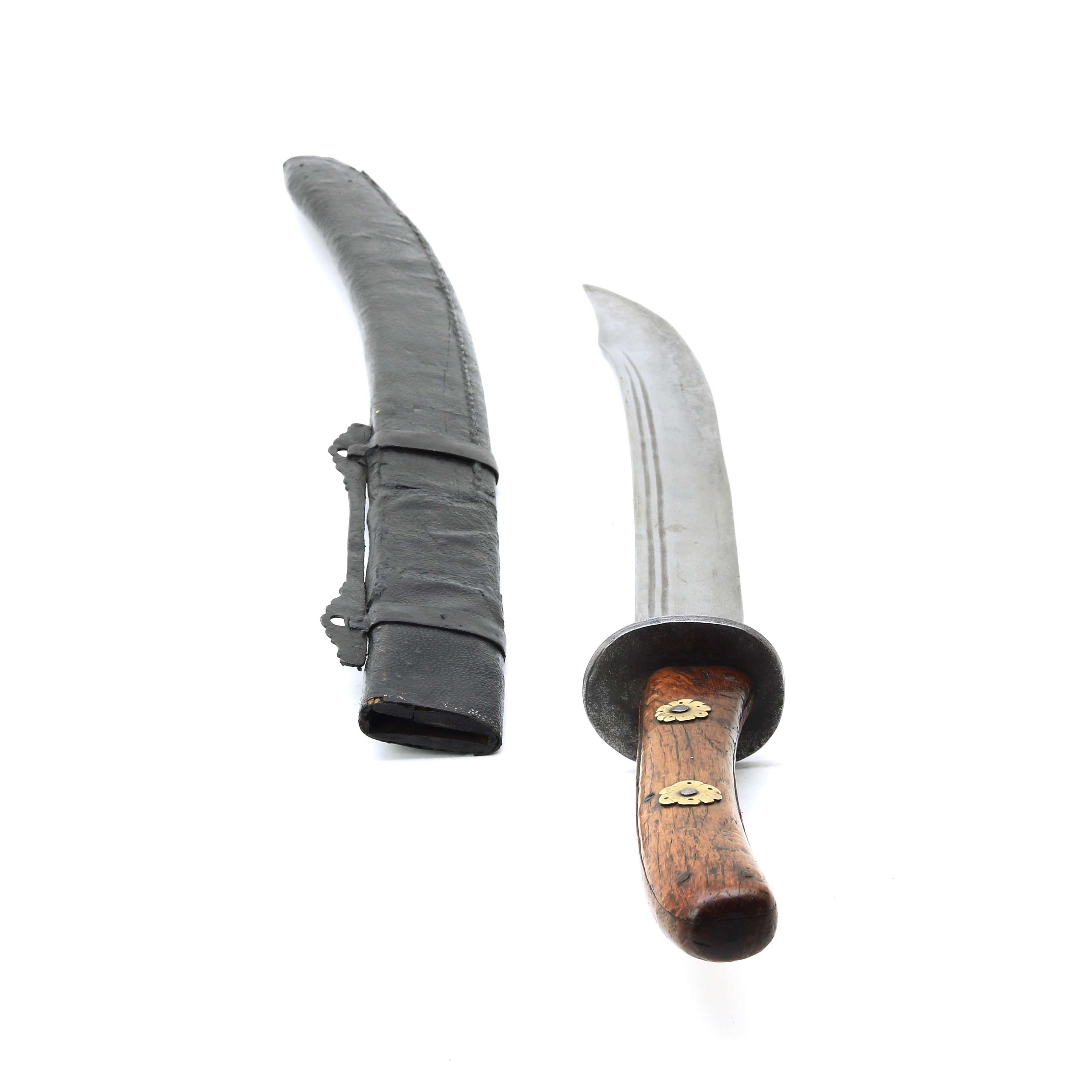 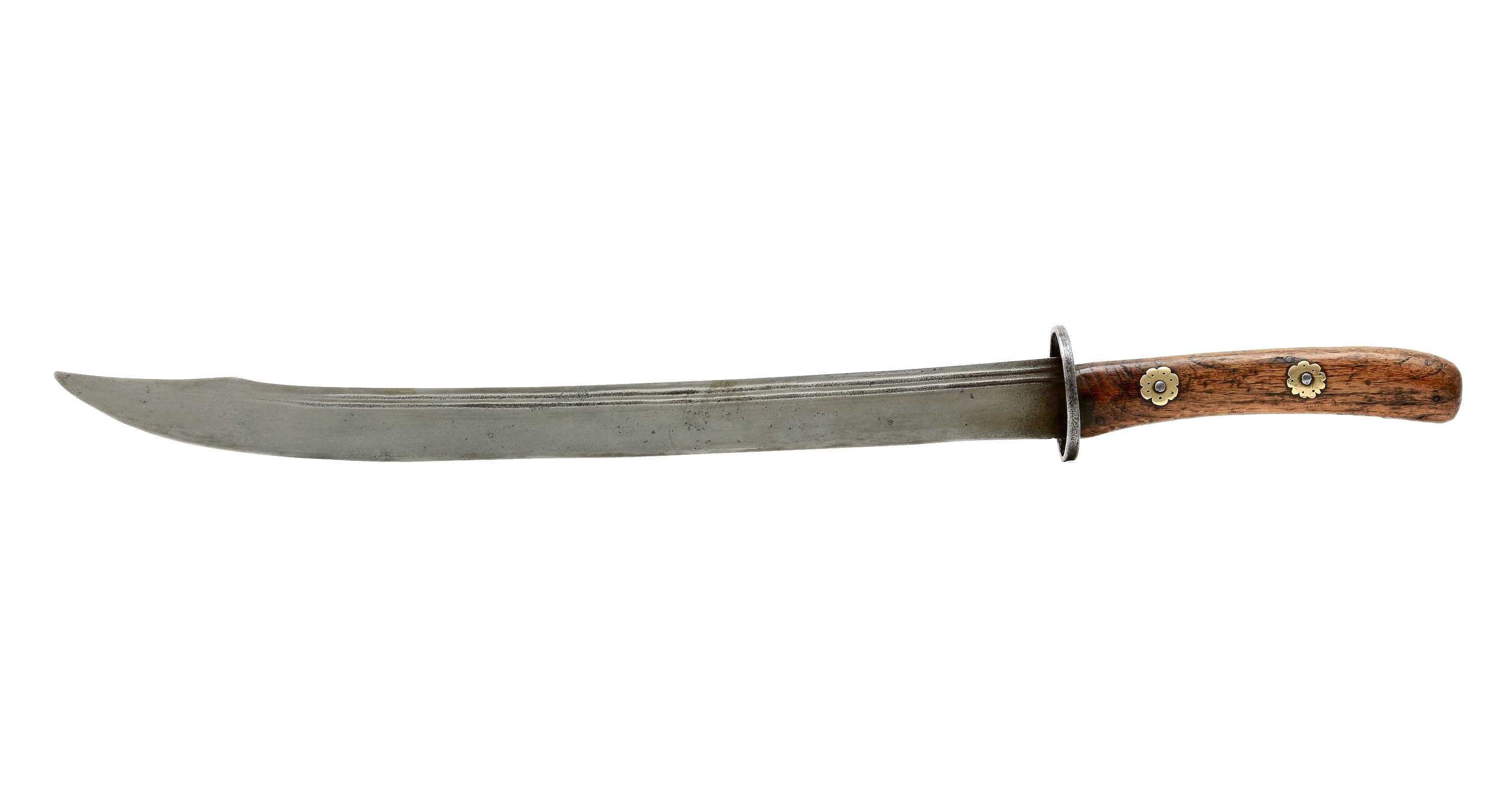