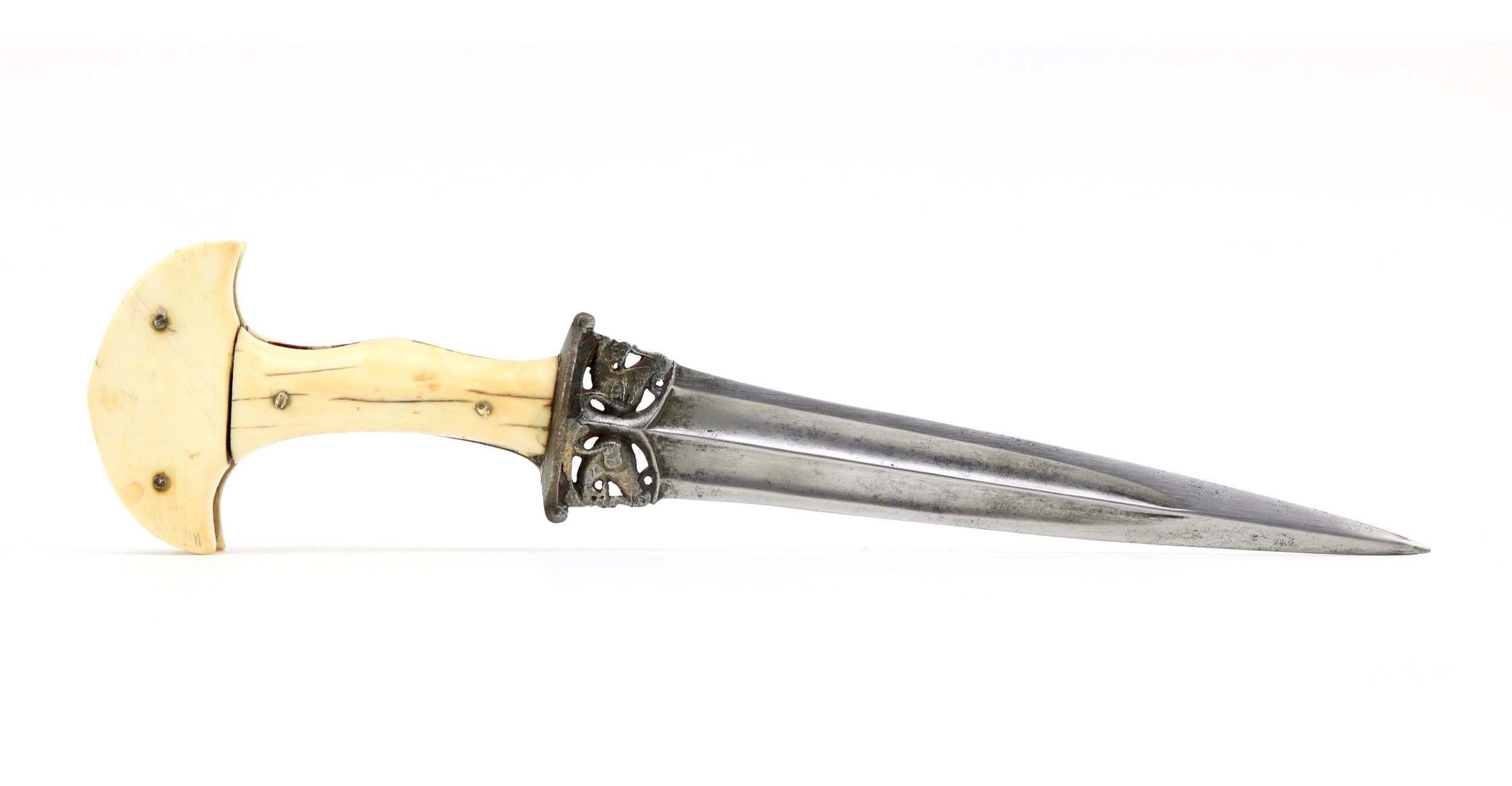 An unusual khanjarli dagger in that it doesn't have the typical recurved blade, but a straight blade instead. The blade is double-edged, with a pronounced center ridge and two sunken panels on either side. The steel is a fine forge folded steel, some of the layering is seen in the sunken panels. At the base of the blade are two Yali, south Indian mythical lionesque figures, chiseled in openwork.

The hilt is of typical form with ivory plated grip and lunette pommel. It has a subtle crossguard with a discoid plate in the center and bud-like finials on either side. The tang follows the profile of the hilt, albeit a bit smaller so the sides of the tang are somewhat sunken between the plates.

Both yali and the sides of the tang were once covered with silver overlay which was fire-gilt, decorative techniques commonly found on the better south Indian arms. Now, the silver and gilding are only partially remaining. Cross-hatching on the exposed iron surfaces indicates where more silver would have been.

Khanjarli often include a knuckle guard, but this example does not have one, and never had one. In that sense it is closer to some earlier chilanum.

Khanjarli with straight blades are incredibly rare, and at this point, only one comparable example comes to mind. It was in the Richard R. Wagner Jr. collection.1 The blade of that example was nearly identical to the example here, while the hilt was slightly different in that both sides of the pommel curled inwards and formed stylized bird heads. It was auctioned at Bonhams in 2015 for € 3,371 including premium.

It was thought to date from the 17th century, and was attributed to Vizianagram. The Vizianagram attribution is often made, after the writings of Lord Egerton in 1880, but needs further research.

This piece probably dates from the 17th or early 18th century. I err more towards earlier because of the absence of a knuckle guard, and relatively small size of the lunette pommel that seemed to have gotten larger on later examples. Yali were among others a royal emblem of the Vijayanagara empire, which lasted until 1646.

A very interesting khanjarli with a straight blade and chiseled forte depicting two Yali. It is one of oly two such examples known to me at this point. It is in relatively good condition for its age, and has a nice strong blade with well-defined features. 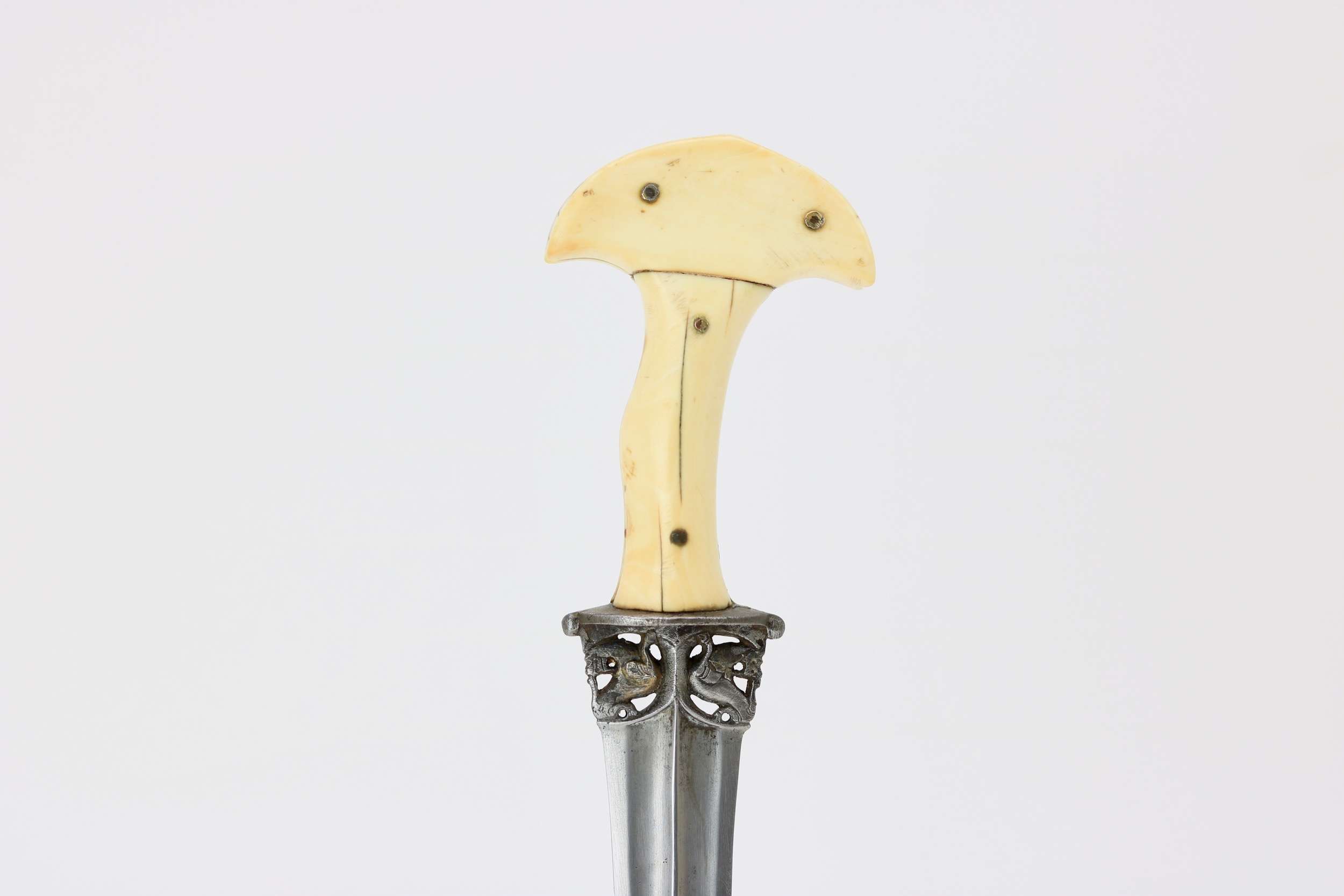 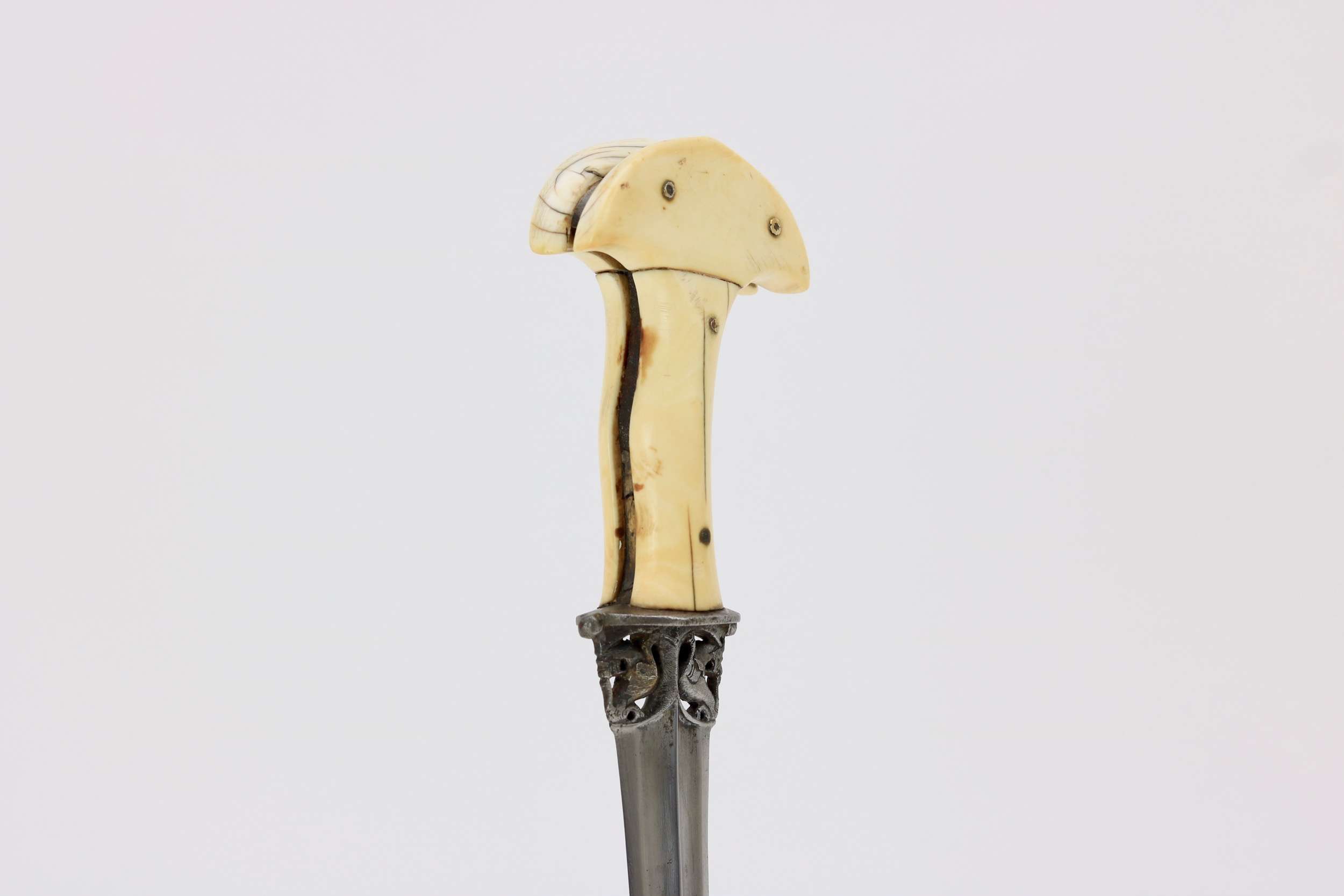 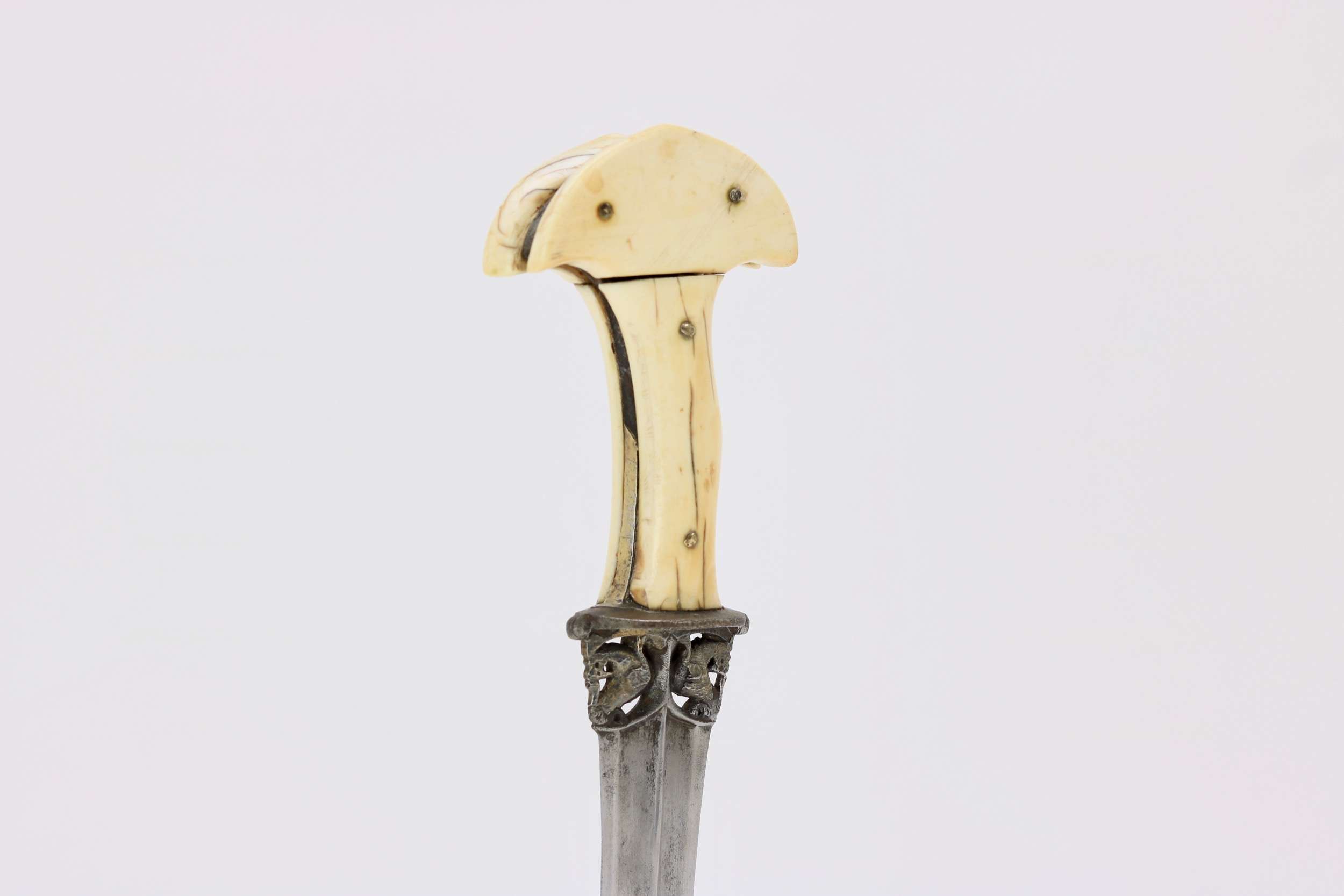 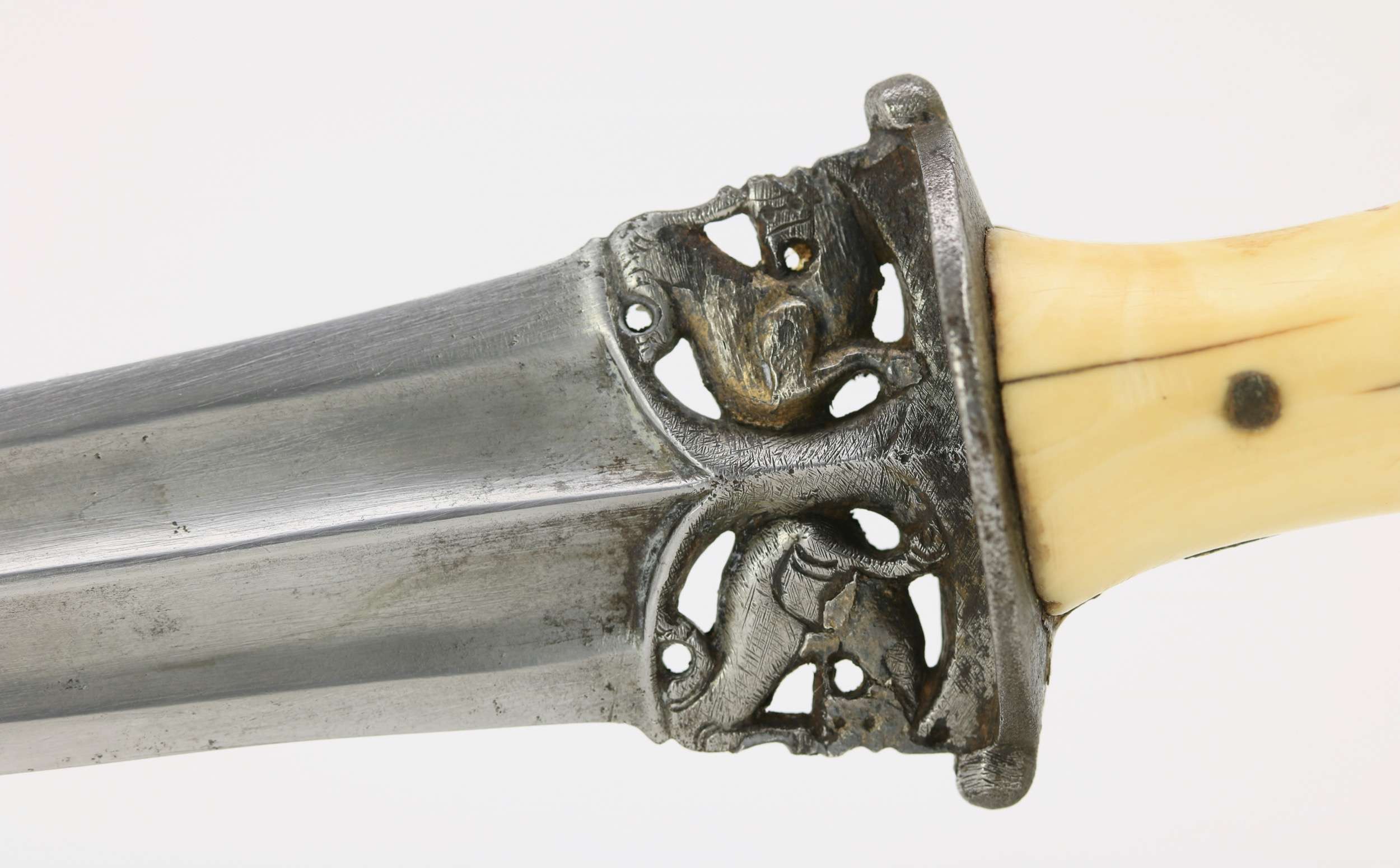 Weapons not for man, but for an unfortunate rooster. Retired, in a hardwood box.