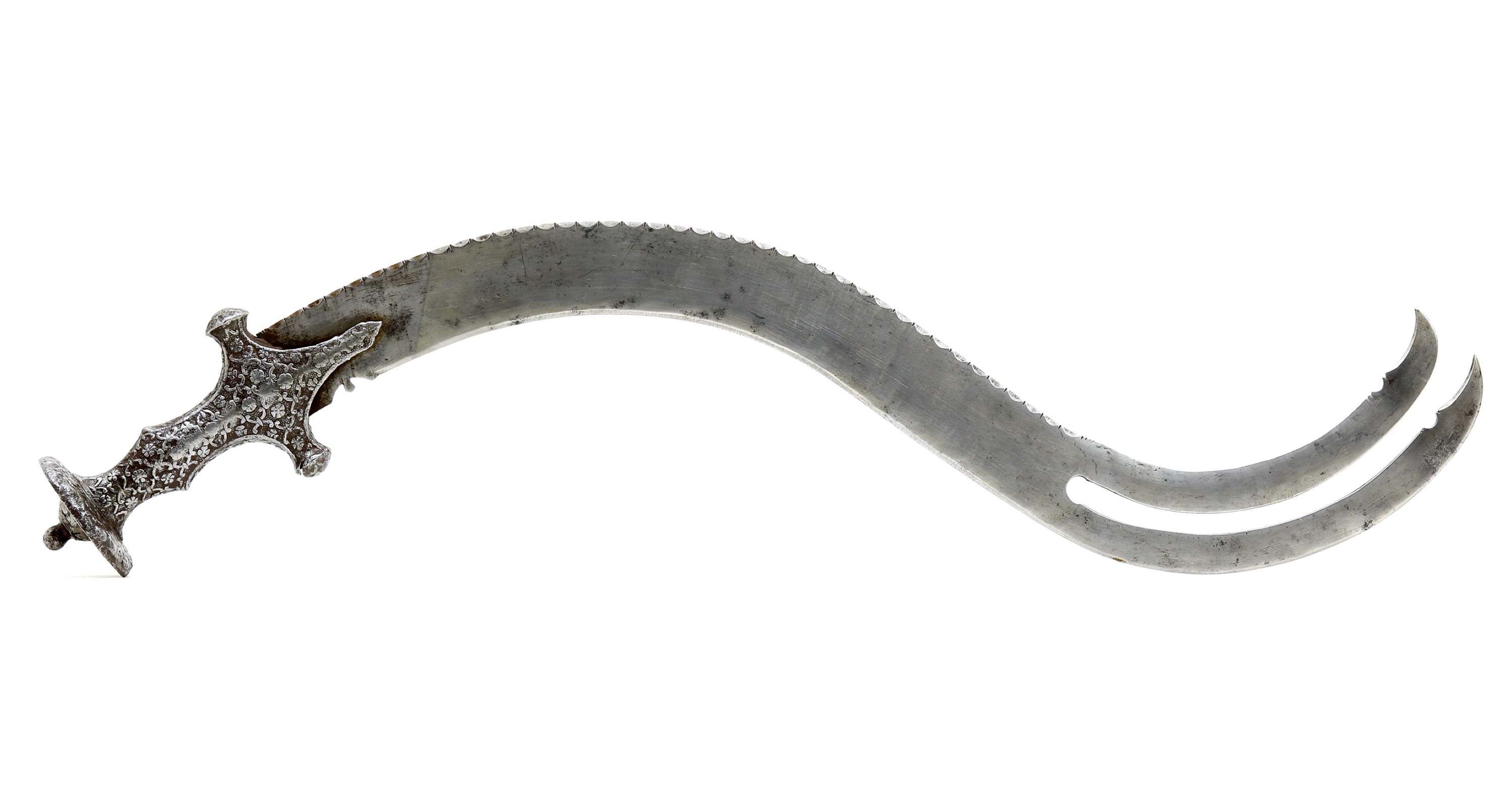 I like unusual items, and they rarely come as unusual as this.

The sword features a strongly S-shaped blade with a bifurcated tip. Each tip ends in an upward swept, fang-like double-edged point. The blade's cross-section is mostly flat, with a notched spine. The edge starts a little portion up the blade, in typical Indian style, but has the strange feature of a notch with a protrusion in its center. This notch is clearly modeled after the kauro seen on the Nepalese khukurī. 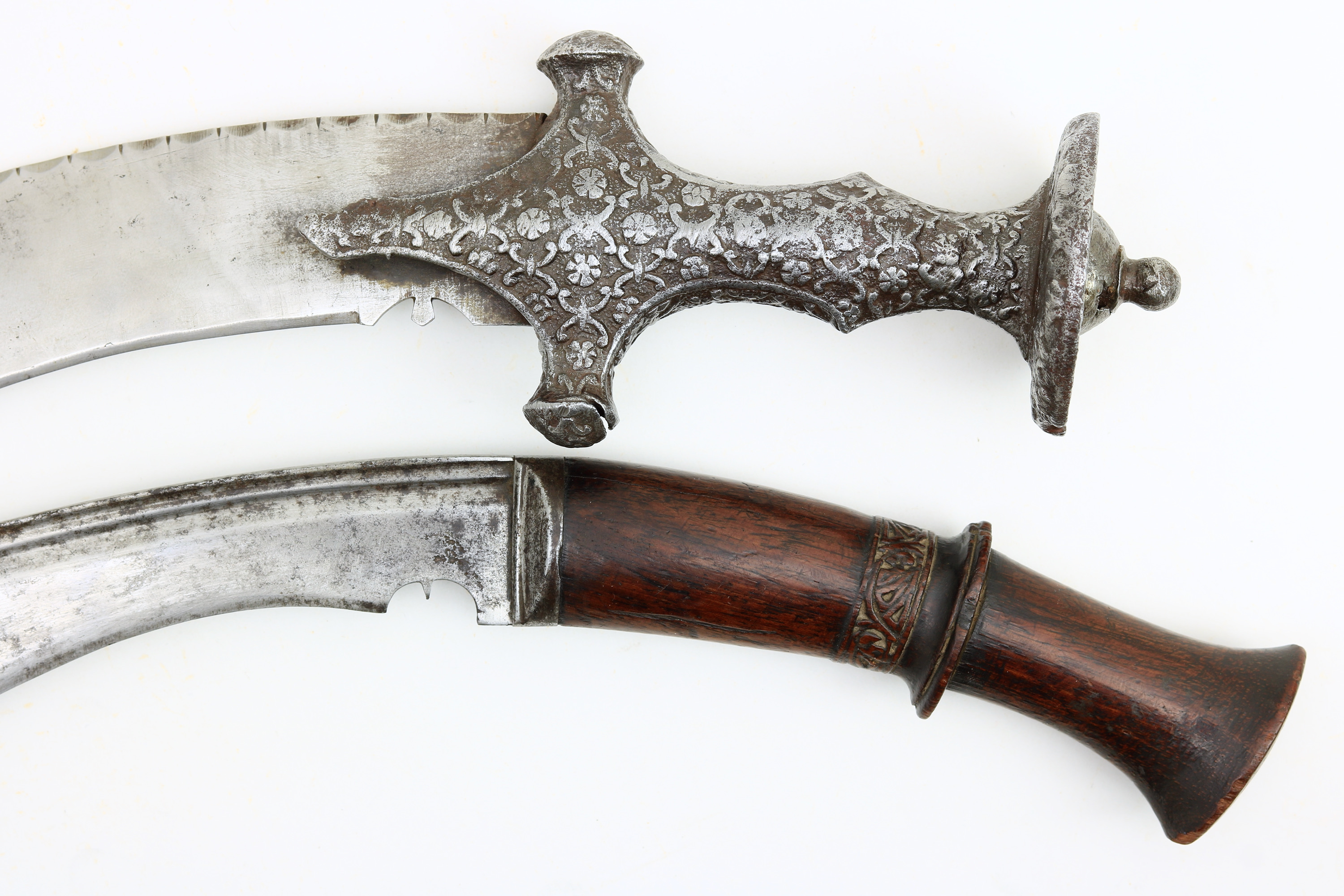 The blade, surprisingly, appears to be made of a low contrast Indian wootz steel. It has also been heat treated, with a clear oblique demarcation between the quenched part and the base of the blade. It was not in a very high polish when I got it, so like many Indian arms probably wasn't created to show off the wootz, so I kept it like I got it. 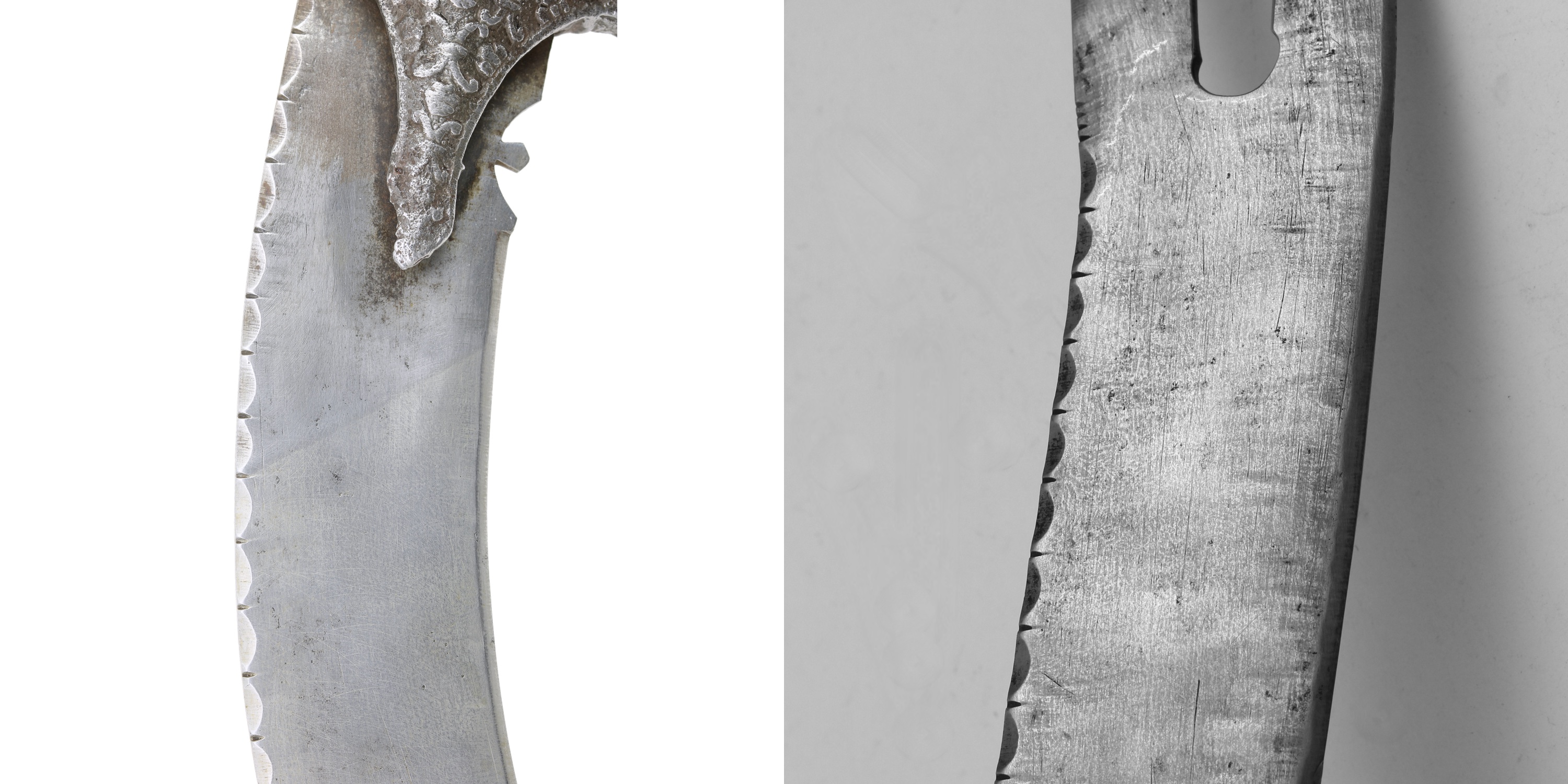 The blade's construction is clearly a reference to Ḏū-l-Fiqār (ذو الفقار), often spelled zulfiqar, the legendary sword of Ali, cousin and son-in-law of Muhammad. In the world of arms and armor it is mostly famous for the phrase from the 10th century Persian classic Tarikh al-Tabari (تاريخ الطبري) or "History of the Prophets and Kings":

"No warrior but Ali, no sword but Zulfiqar"

This sentence prides on a lot of old swords, as a talisman that imbued some of Ali's strength into the wielder.

The text gives no description of the sword's shape, but it can be interpreted as "being bifurcated", "having a spine", or "being notched". This gave rise to a large number of interpretations of the sword, many with a bifurcated tip, some notched, and some combining both elements in their design.1

It is interesting that the notch is a clear nod towards Nepalese (Hindu) warrior culture, on a blade otherwise shaped like an islamic talisman.

The blade is mounted in an old iron talwar hilt. The type of pitch used to join the two, as well as the corresponding patina under the langets suggest both have been together for a long time, although the hilt gives the impression of having been older than the blade.2 Older hilts married to later blades was common practice in north India, various examples with dates blades and hilts exist in for example Rajput armories.

The hilt is of north Indian Hakim khāni form, decorated with a diaper pattern over a raised and dotted background. A notch in one of the quillons, and one at the disc pommel suggest it once had a hand guard, now lost.

I have found only one comparable so far, it was sold by Micheal Backman of London. The blade is nearly identical to this one, while the hilt is a different style of norther Indian talwar hilt. On both hilts the quillons incline slightly forward, a feature I have come to associate with the Punjab and to lesser extent also with Delhi.3 The Decor on the Backman example is similar to two examples in the Jodhpur armory, one of which was attributed to Punjabi by Elgood.4

The blade on the Backman example bears a stamp with a logo, some incomprehensible text and the numbers 17 09. If any of the readers has any idea what the stamp may signify, I'd be happy to hear from you!

An interesting and unusual sword. The shape seems to render it unpractical for fighting, yet the blade is of quality material (wootz) and tempered to hardness. There is only one close comparable, which is also mounted in a talwar hilt. Judging from its various stylistic features, it's probably made in the northwestern part of India. 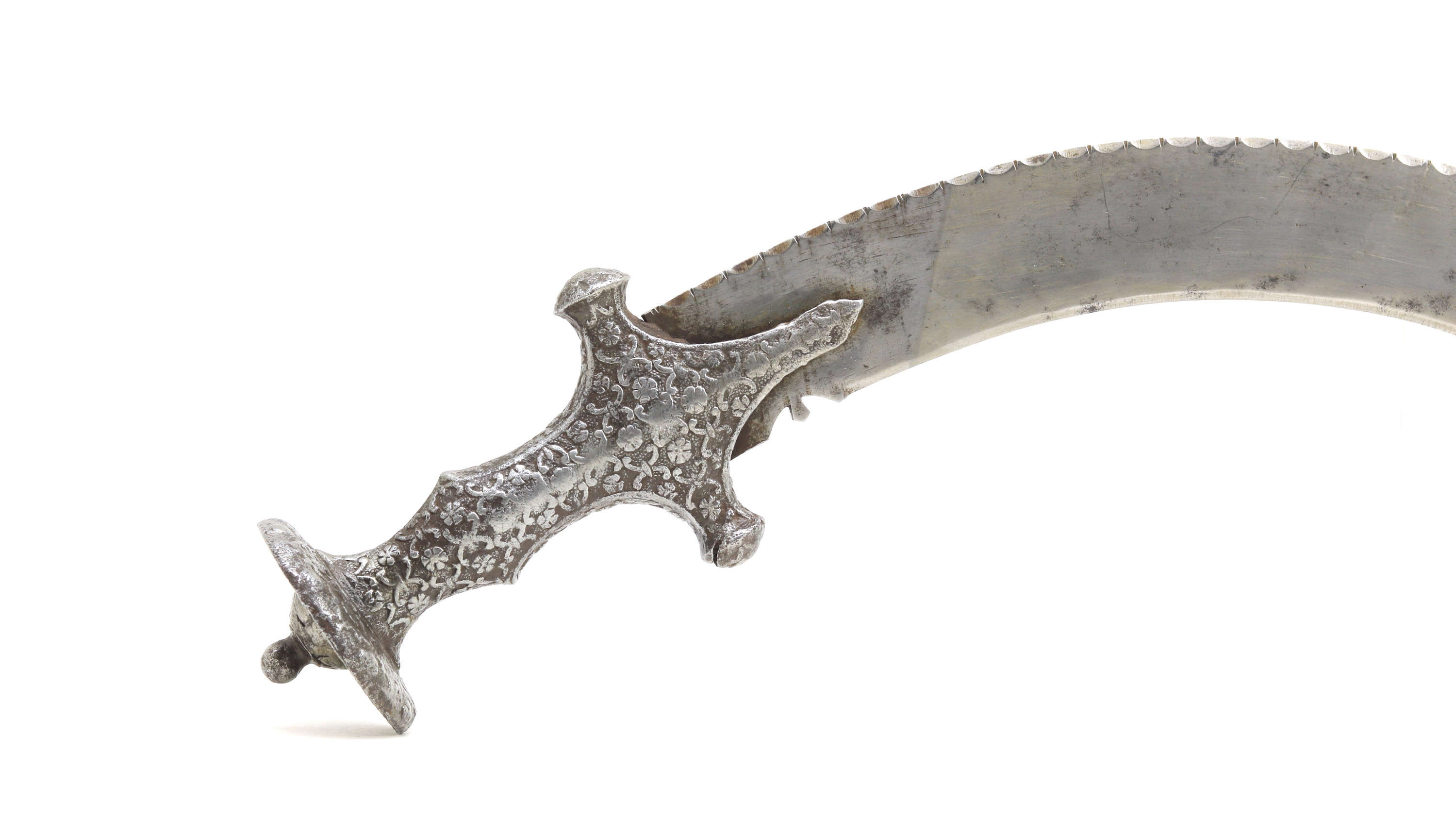 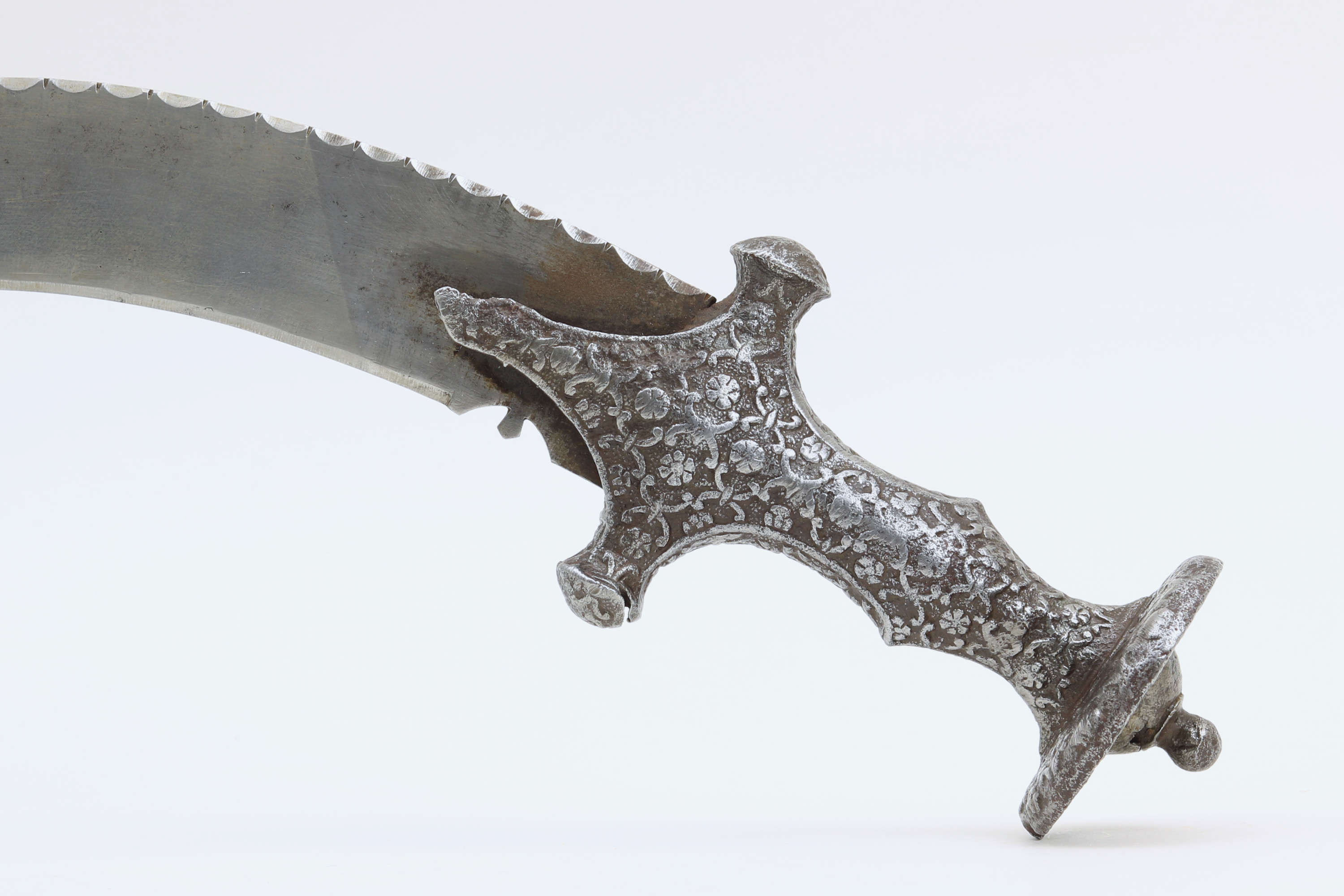 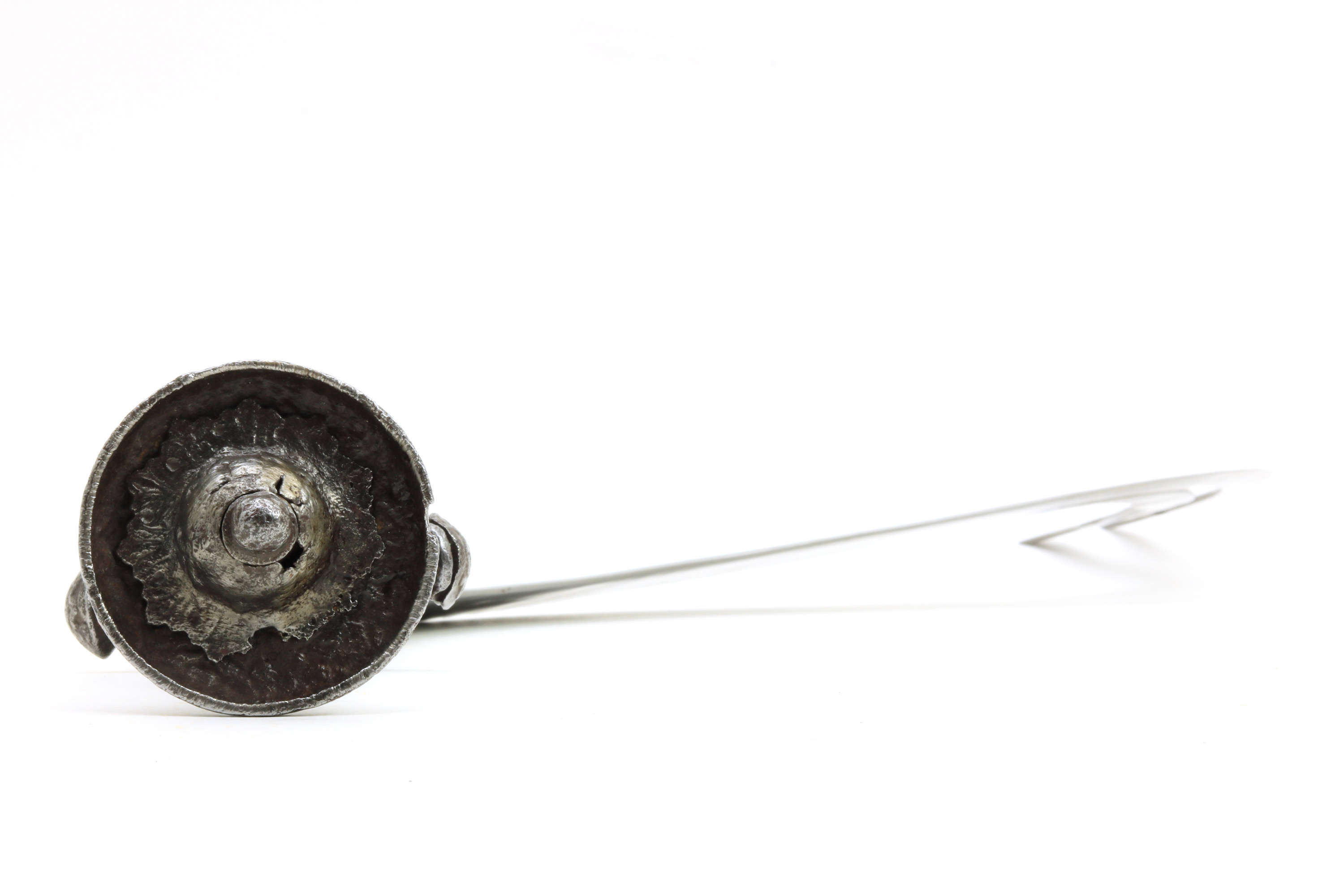 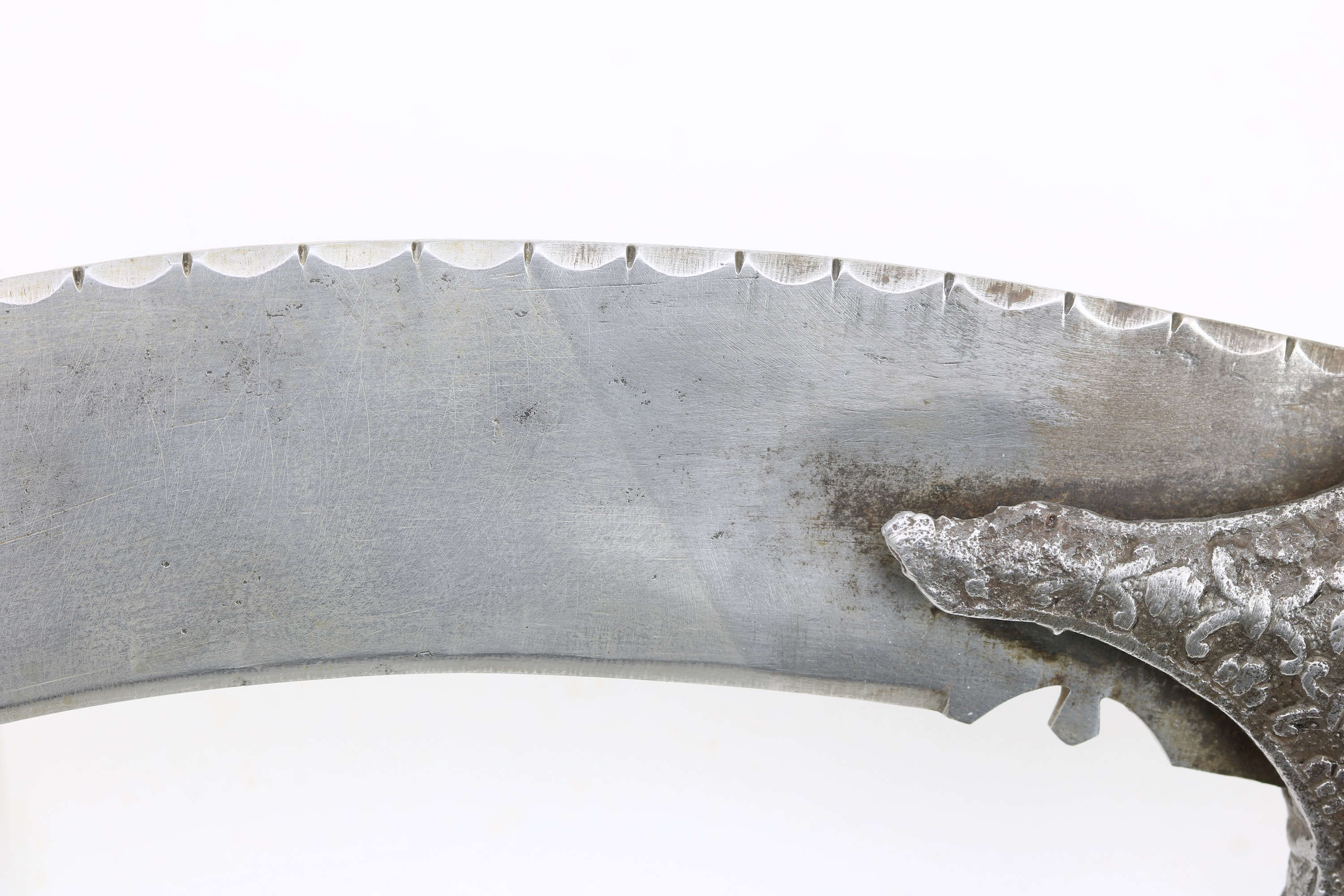