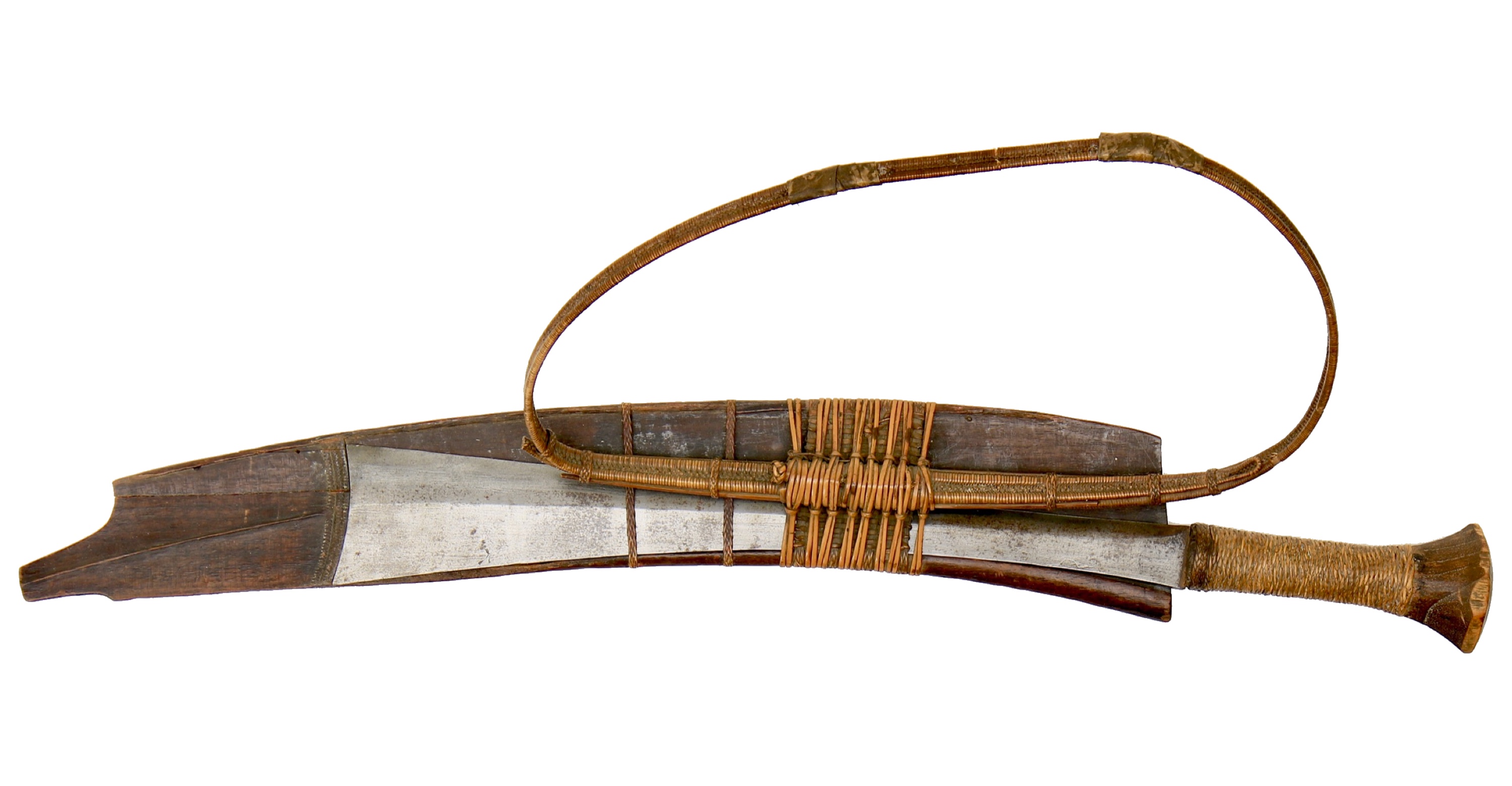 Made by the Tureng people.
Used throughout Kachin State and neighboring Assam.

In collector's circles, these swords are mainly known as Kachin dha in reference to the people of Kachin state in northern Burma, situated between Yunnan, Tibet and Arunachal Pradesh.

Here the weapon is mainly associated with the Jingpo people. They were however not exclusively carried in Kachin, the Naga of Assam also used identical swords which lead some to call them Naga dha instead.

As it turns out, neither of these people produced these swords and imported them from elsewhere. Period travelers indicate that the Tariang produced them. In colonial writings, the weapon is known almost exclusively as the Linkin dha or in Burmese, simply lin gin (လင်းကင်း).

The dha with the Chingpaw, as with the Burman and the Shan, is a national weapon. At the hilt the blade is an inch and a half in width, widening to about two and a half inches at the truncated tip. The back is slightly curved. It is half sheathed in wood and slung over the right shoulder by a rattan ring. In the case of well-to-do people or warriors, this rattan sling is sometimes adorned with cloth and embroidery, or with the claws or teeth of wild animals. It hangs with the hilt in front ready to the hand. This is the proper shape of the Linkin or Chingpaw dha.

Among the Kachins who have pushed farthest south there are other types, taken from their Shan or other neighbours, but the characteristic half-sheath is almost always retained.

East of Bhamo Mr. George says the Kachins use a long straight sword, about two and a half feet long, which they call ntugaht.

These, with the more orthodox Linkin are said to be manufactured mostly by the Tareng, the Nga-chang, and possibly also the Khunnongs. Like the wild Wa the average Chingpaw cannot or does not make his own dha. 1

-Gazetteer of Upper Burma and the Shan States, Part I Volume I, 1901

Adventurer and tea planter Errol Gray saw such dha being produced in northern Kachin in 1885:

"Mr. Errol Gray speaks of meeting Turengs on his way to the country of the Khumongs, above latitude 27° 15' and in about longitude 97° 30'. The Turengs, he says, are the great blacksmiths of that neighbourhood, just as the Ngachang are for the country round Hotha and Latha. They make all the dhas and daggers worn by the Singpho and the Hkamti Shans, and these under the name of Hkampti dhas form one of the chief articles of trade between the Hkamti valley and Assam.

The iron is found in the hills forming the boundary between the Turengs and the Khumongs.

It is of excellent quality and the knives are very durable.

The dhas are made in tour varieties, the streaked, the indented, the white,

and the black dhas" 2

-Gazetteer of Upper Burma and the Shan States, Part I Volume I, 1900

Given the above, linkin dha or hkampti dha seems the more appropriate term for such swords. For more information, see my glossary article: Lin gin (လင်းကင်း).

A classic example of the type. Echoing Errol Gray's observations; the blade quality van be called pretty good. It is forged folded -rather finely so for what is essentially tribal work- and shaped with precision.

Blade
Along the edge we can see it has a hard inserted edge that is protected by layers of tougher iron, the edge's steel with martensite chrystals formed during quenching that show up in the form of a temperline.

The blade's cross-section is wedge-shaped with a secondary bevel at the forte, and gradually merges into a flattened lenticular cross-section at the wide tip. The secondary bevel is markedly more pronounced on the right side than it is on the left, making for somewhat of a chisel profile. It reminds of the asymmetrical cross-sections Taiwanese aboriginal knives and mandau of the Dayak of Borneo, which in turn may have inherited the shape from early Chinese swords.

Because it goes from thick to rather thin at the top, has a very nice balance and is not as top heavy as the profile would suggest. The function of this widening is to put steel behind a very thin edge, making for impressive cutting power, while the center has more of an axe-like geometry with a beefy edge that can split wood without taking damage. It's a rather clever geometry that perfectly suits its intended purposes. 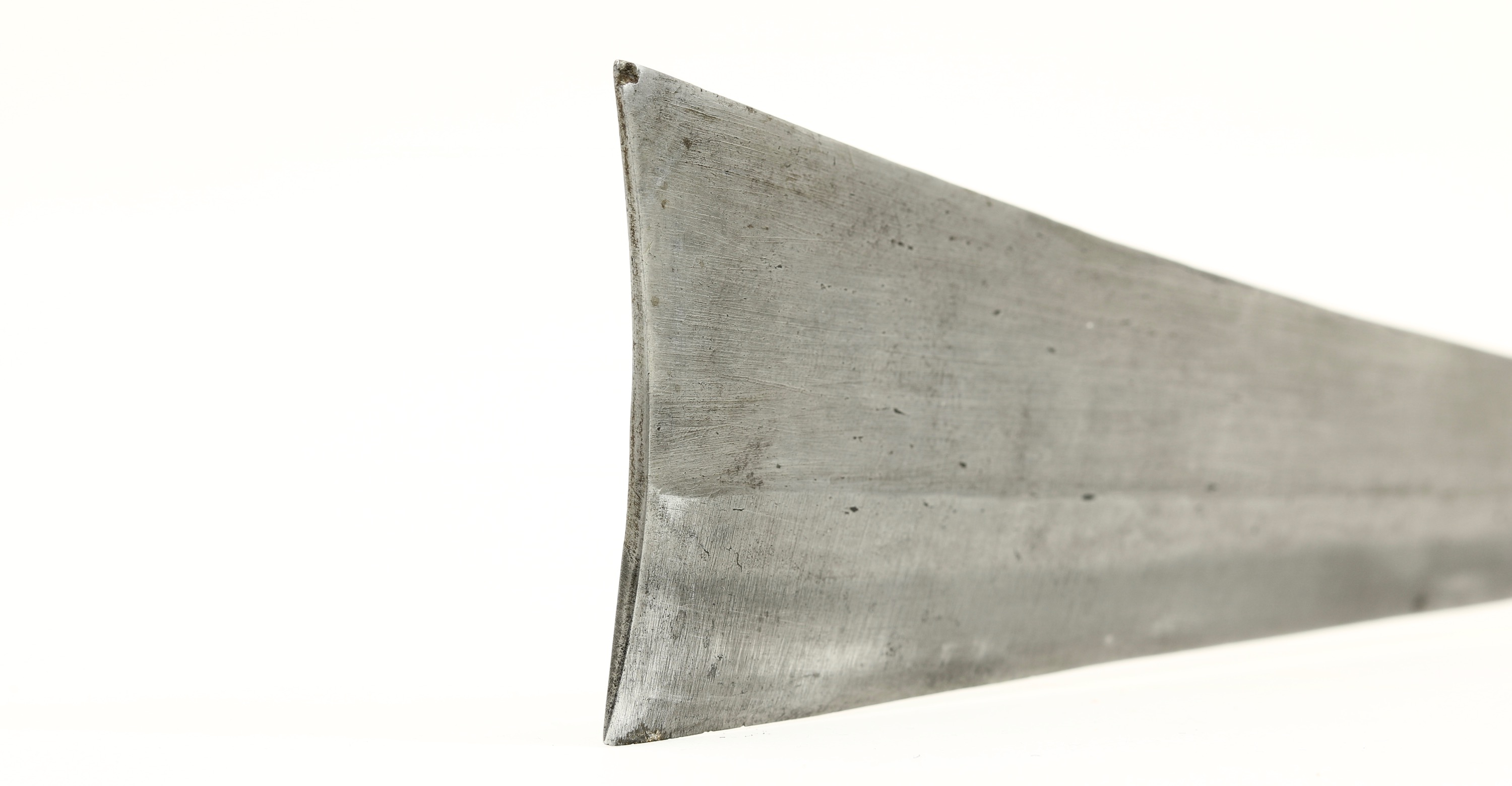 Close-up of the tip.

Hilt
The hilt appears to be made of Chinese magnolia, known scientifically as Talauma Hodgsoni also known as Magnolia hodgsonii. It is also used in Nepal for making khukurī handles, where the wood is called paṭpaṭe (पट्पटे). Some chips on the pommel, with a patina indicating it was working life damage.

The hilt is bound with braided strips of rattan, no losses, and everything is still tight.

Scabbard
The scabbard is made of a flat piece of wood, now split but held together by rattan braid. It retains its rattan original baldric, attached by a woven structure of rattan. The now dried out baldric did snap in three places and was repaired in more recent times, twice by means of tape and a third time with metal wire. Some wood missing at the tip, and some rattan bands are missing.

A very similar dha was in the collection of George Cameron Stone. Now in the Metropolitan Museum in New York.

A linkin dha in the Metropolitan Museum, New York. Accession number: 36.25.1630a, b
Provenance: Bequest of George Cameron Stone, 1935.

A photo of two Kachins, one carrying an identical sword was published by Lt. Col. Willoughby Wallace Hooper in 1886.1

"Kaychins, a tribe inhabiting the hilly country to the east of Bhamo."
Photo by by Lt. Col. Willoughby Wallace Hooper, taken 1886.

The Census of India of 1931 shows a number of Nung men carrying these dha.2 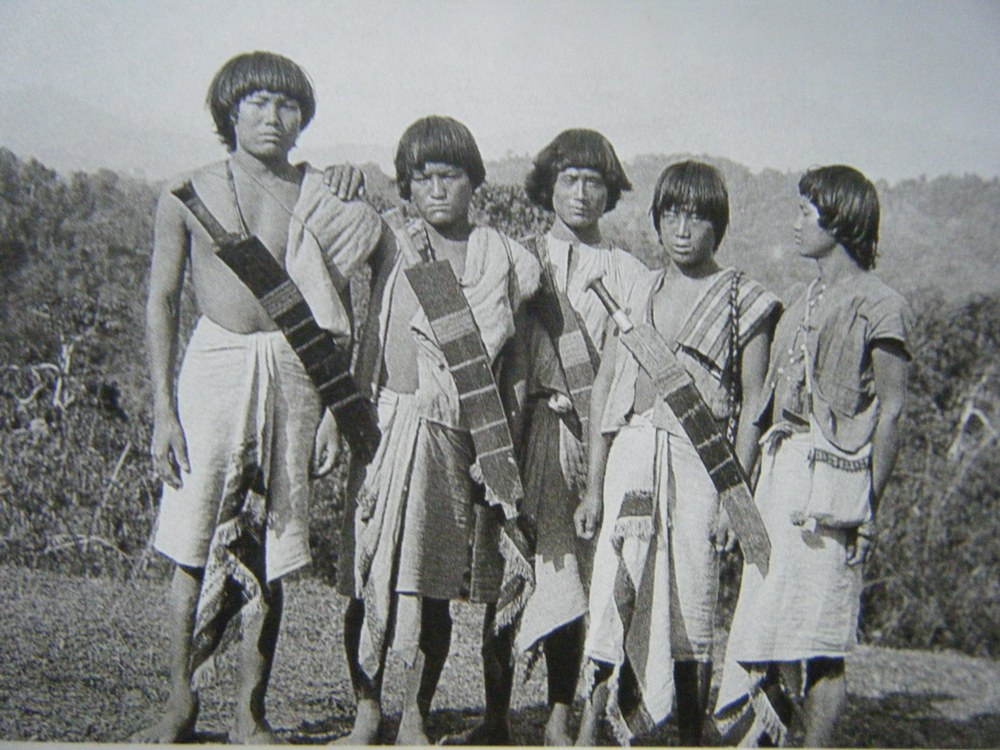 Another photo was shot during WW2 by Billie R. Casey from Texas.3 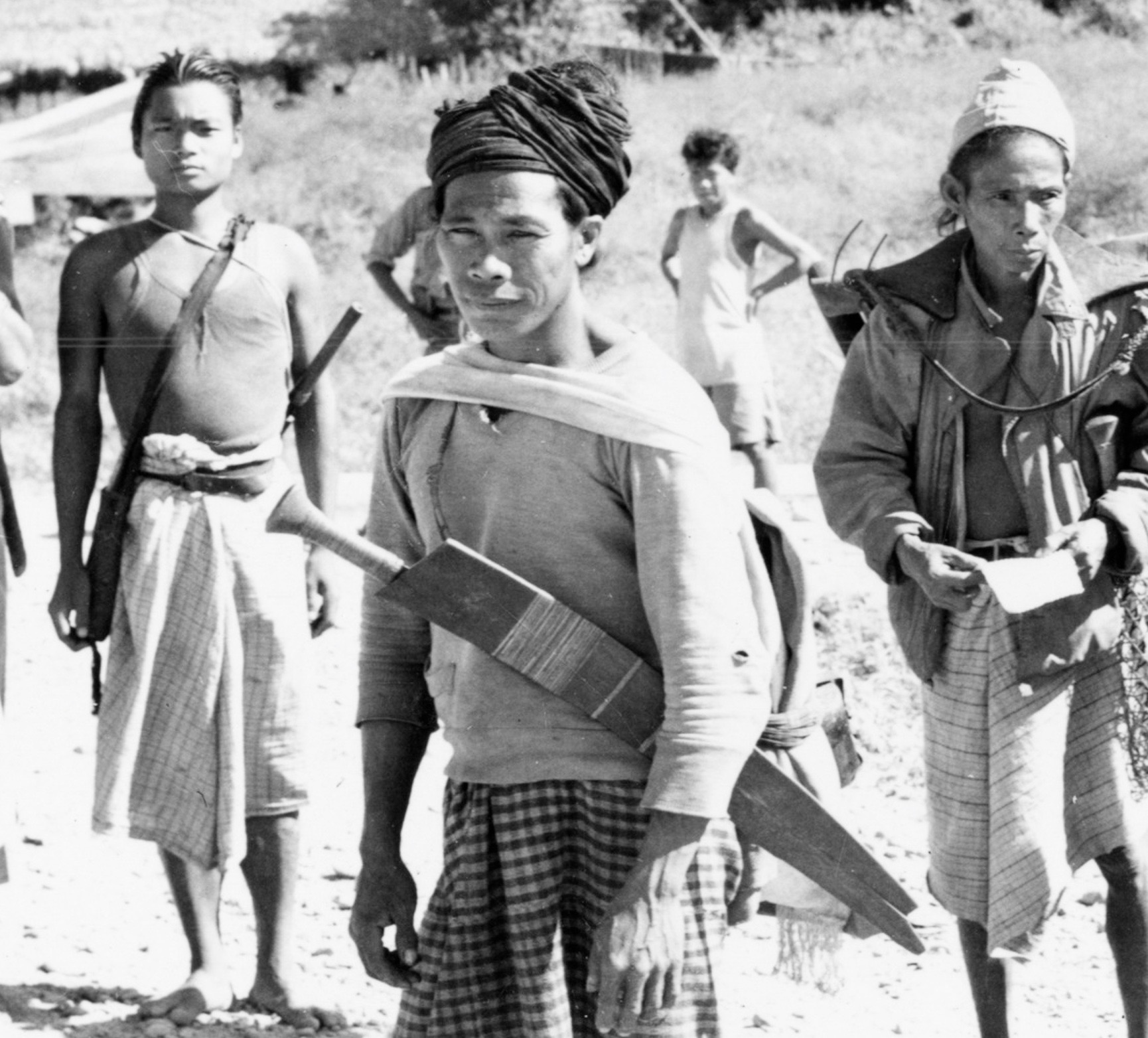 A Kachin soldier with his dha, 1944.
Notice how the scabbard is also split, and with broken tip, like ours.

Often called a Kachin dha or Naga dha, none of these people actually made them. They were made by a people called the Turengs and traded under the name Hkampti dha, referring to part of their intended market, the Kampti Shans. In colonial writings they are consistently described as linkin dha.

A classic example with a good quality blade, nicely forged and of a thoughtful geometry. Having it in one's hands one can see how the often rather discerning colonial authors were impressed by them. 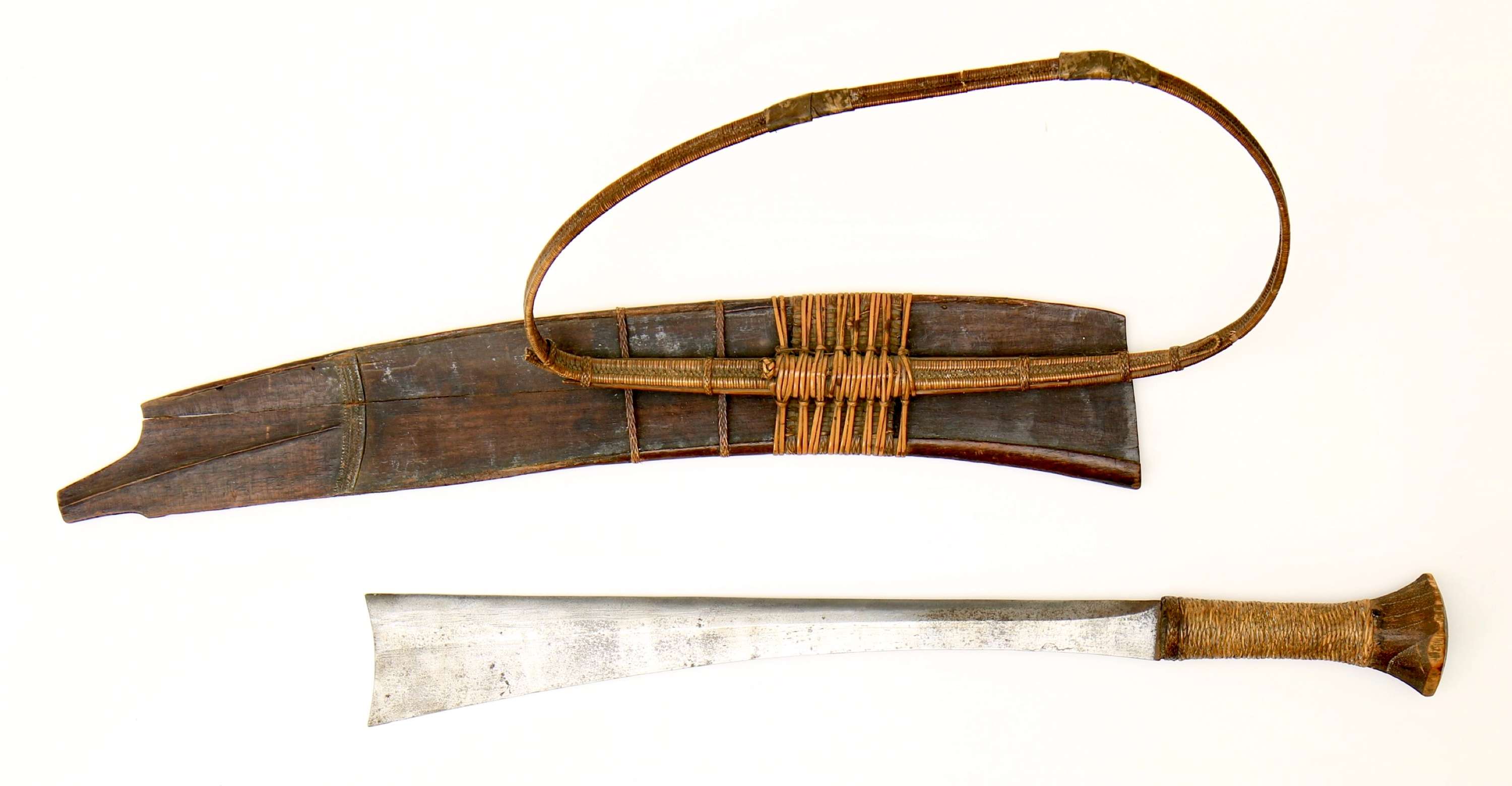 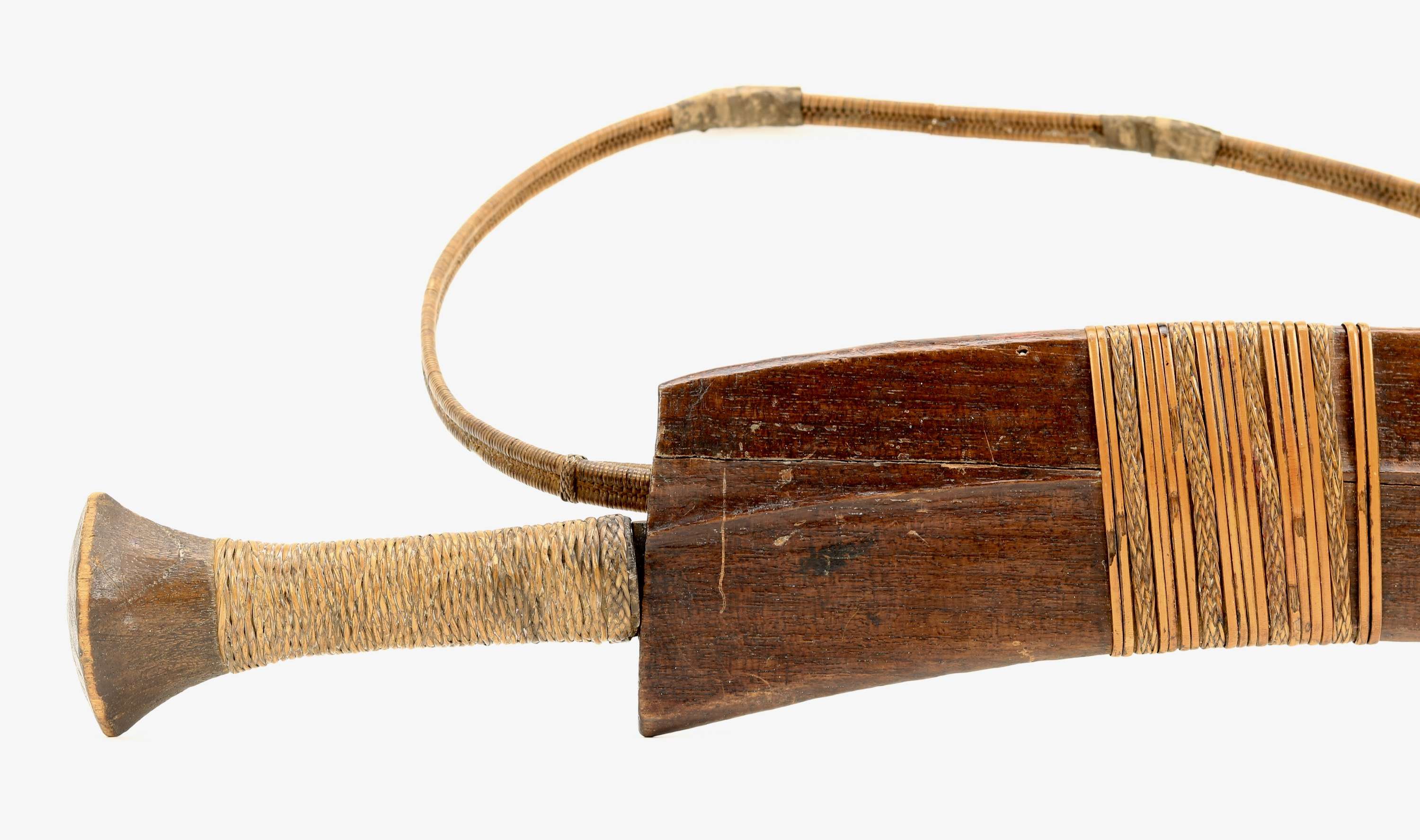 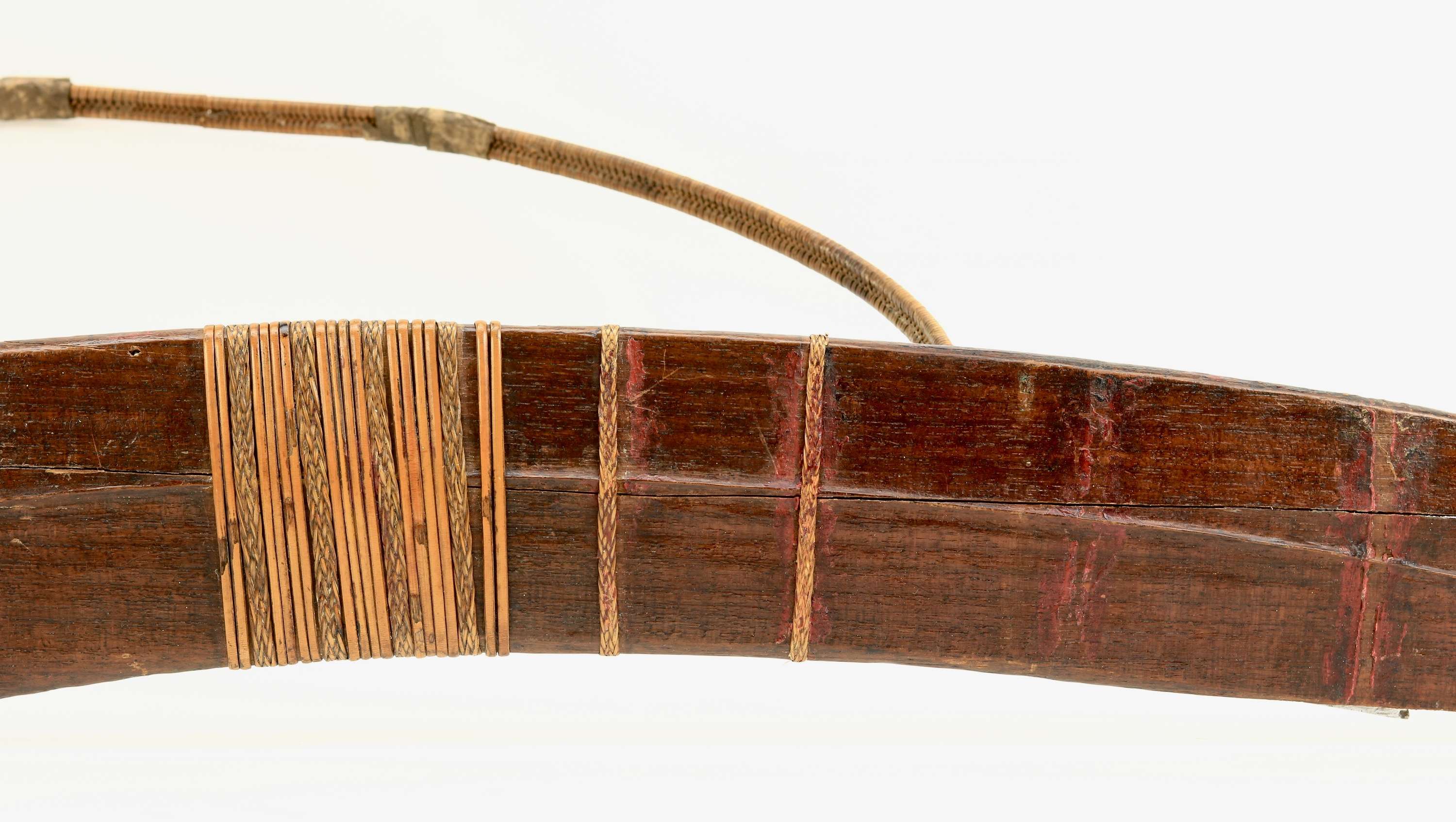 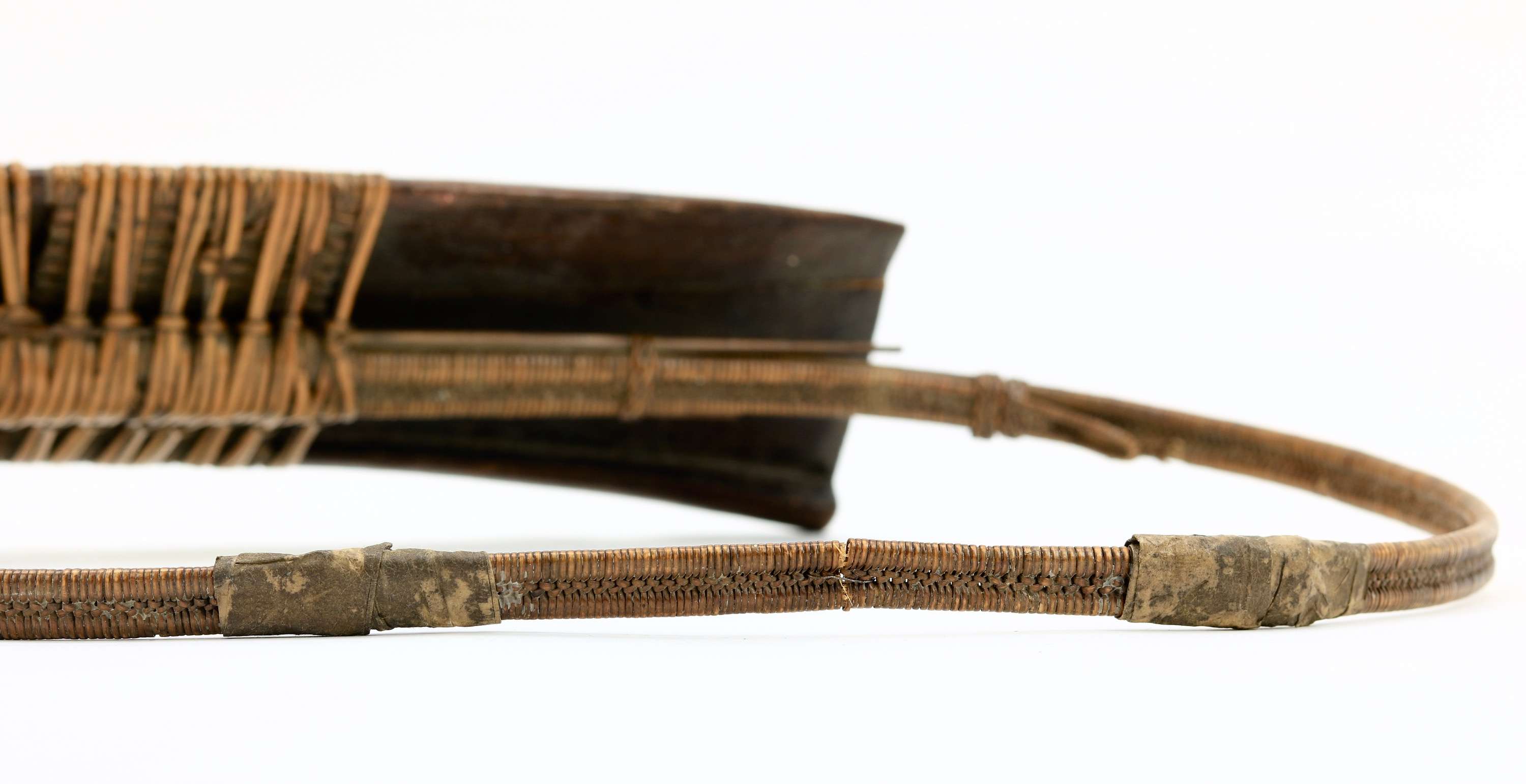