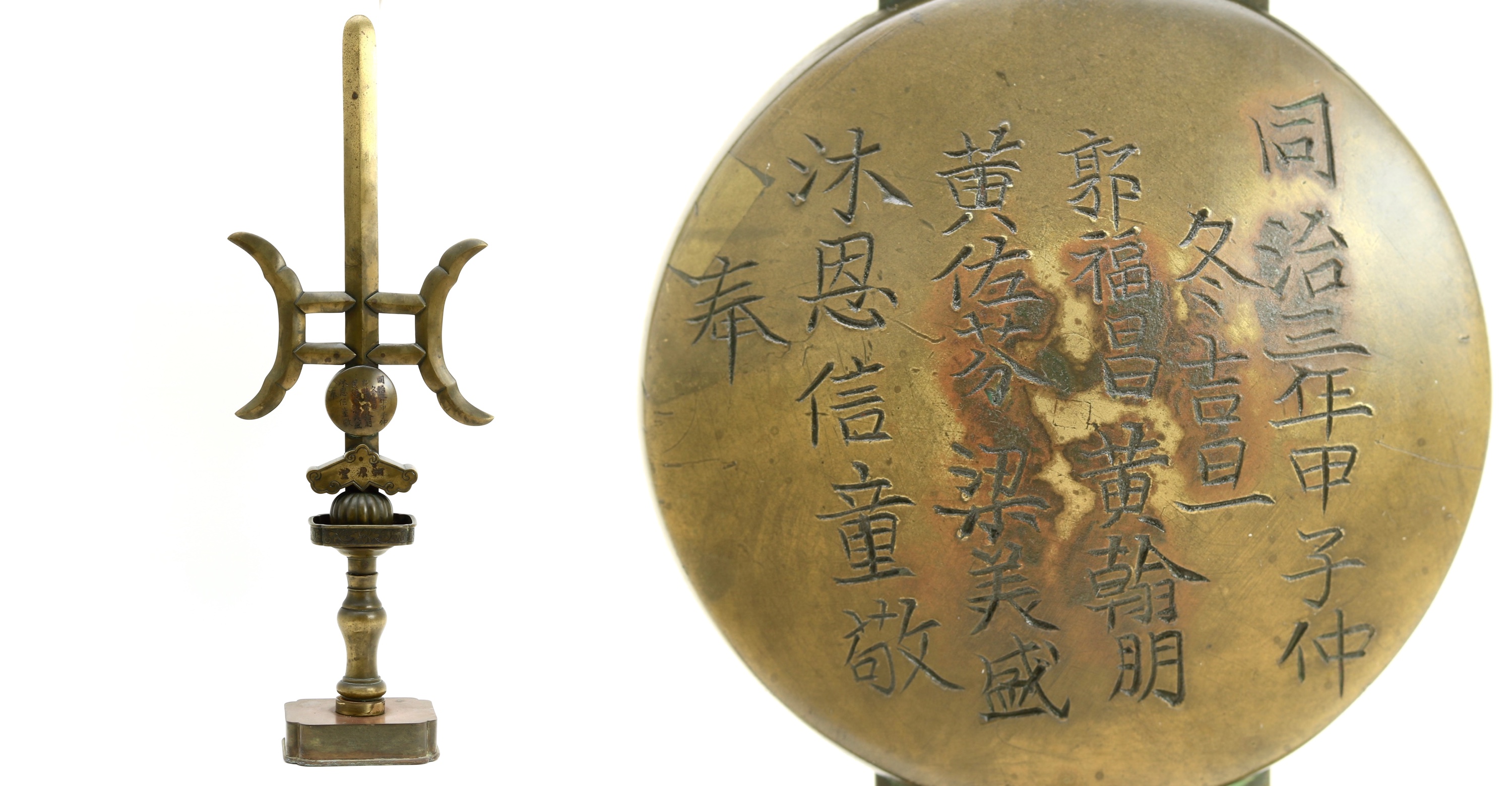 During the Qing dynasty, people that held a high office were often accompanied by an entourage, some of them carrying a diversity of traditional Chinese arms as emblems of their rank and power. It is a tradition that goes back a very long time and originally these men were probably actual guards.

In the late Qing dynasty, when firearms had taken a more prominent role in warfare, these arms were often purely ceremonial pieces. They could be made of painted wood, pewter, brass, or bronze.

A large and heavy example, constructed entirely out of bronze and weighing over 9 kilos. It features a ceremonial spearhead with on each side a crescent moon, attached by means of two bars each that were riveted to the main head.

Such a polearm can have either one or two of these crescent blades, and is called a jǐ (戟), loosely translated in English as "halberd".

Under the main head is a disc-shaped feature with markings on either side and below that a heavily stylized cloud shape with more markings. Under that is a pumpkin-shaped ball that sits in a rectangular cup guard. The rim of the guard is chiseled with traditional Chinese flower designs.

Under the guard is a vase-like neck, that sits on a square base with indented corners. The base is a later addition, to which the upper part is screwed. I think the base was originally for an early electric lamp because there is a hole in the top surface of the base on one side where the switch may have been.

The markings are fascinating, and really make this piece stand out above most others.

Markings on the disc, side A:

"The first day in midwinter."

The 1st day of the 11th month of the lunar calendar. An auspicious day.
Corresponts to November 29 of the year 1864.

What follows appears to be a number of names:

Markings on the disc, side B:

Markings on the stylized cloud, side A:

Táng is best translated as "hall", like a large room in a house or even a shop. In this case, it most likely refers to an ancestral hall, temple, or a yamen courtroom.

The other two characters are the name of this place. The first character is written in a nonstandard way and could also be an alternative way to write piǎo (顠).

Markings on the stylized cloud, side B:

This is the name of the shop that made it. Shop markings on Chinese arms and armor and related items are extremely rare. The shop name literally means "Ten thousand victories".

An important reference to these is in the Illustrated catalogue of the remarkable collection of the Imperial Prince Kung of China.

Accession numbers 534 and 535 are two racks that hold four pewter pole arms each, the second from the left on rack number 535 is a halbert like the one shown here.

The racks are described as:

535 - ANOTHER STAND OF FOUR HALBERDS

Including Imperial and scholarly insignia of rank, in pewter, and
matching preceding. Mounted with red lacquer shafts of wood. Used
for procession and ceremonial purposes. Size similar to preceding. 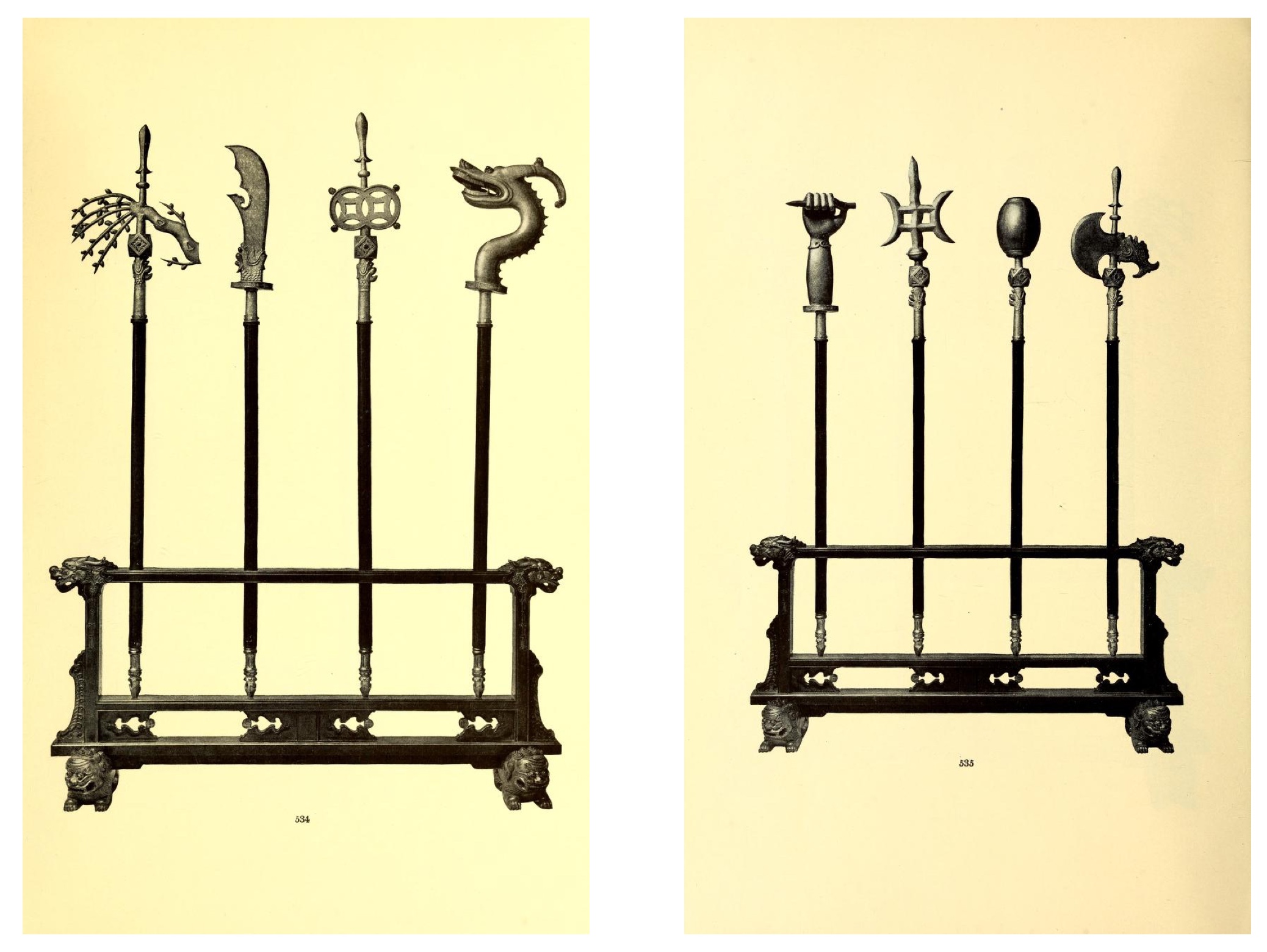 The collection was acquired from the prince by the renowned art firm Yamanaka & Company and auctioned by Thomas E. Kirby of the American Art Association, at the American Art Galleries, Madison Square South, New York, on February 27th, 28th and March 1st, 1913.

Decent condition throughout. Some minor scratches and blemishes, two larger patches of corrosion on either side, near the main tip. I left the original patina intact, a subsequent owner can choose to polish it up more but I personally prefer those signs of age to survive intact, especially on a piece that is wholly constructed out of bronze.

Such pole arms are fairly rare but not incredibly so. What really makes this piece stand out is the many markings on the piece that inspire further investigation. It features among others a shop name, an intended place, an exact date in the year 1864, and a myriad of names.

I am under the impression that is is a commemorative piece that was to be placed in the hall mentioned in its markings, and perhaps taken out during ceremonies. The varied nature of the surnames seems to point away from an ancestral hall, so perhaps it was a more public place like a place of worship.

Notes
1. Illustrated catalogue of the remarkable collection of the Imperial Prince Kung of China, 1913. 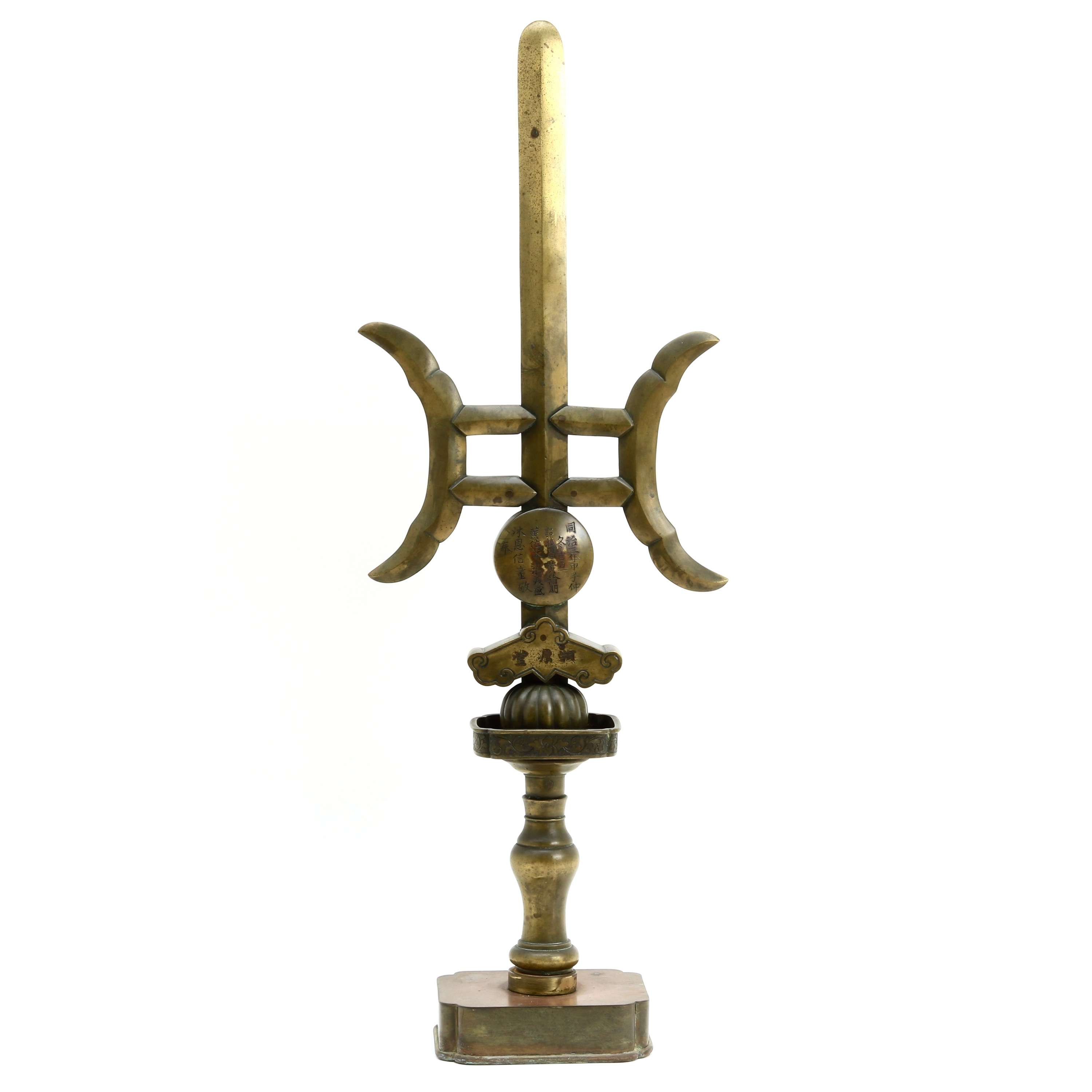 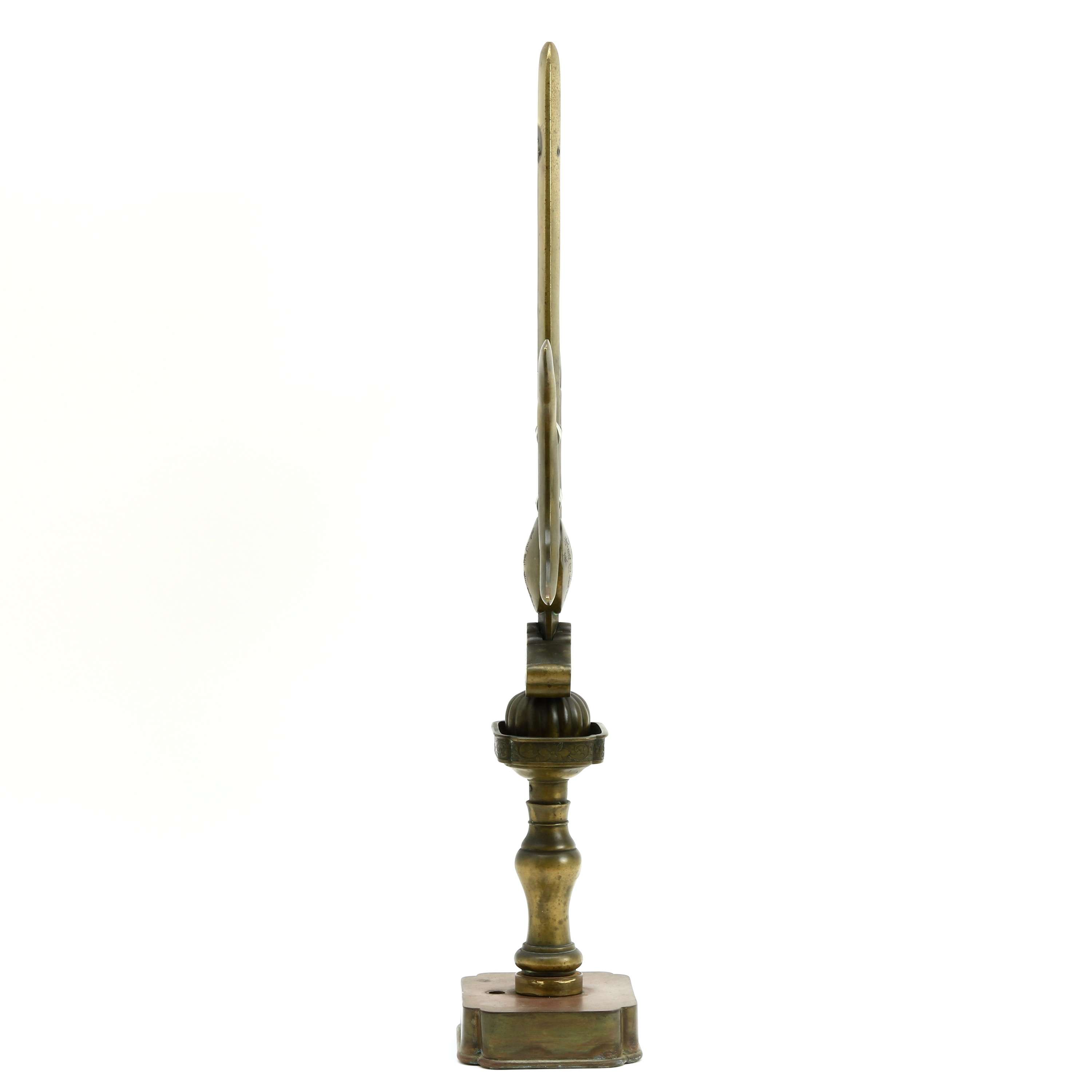 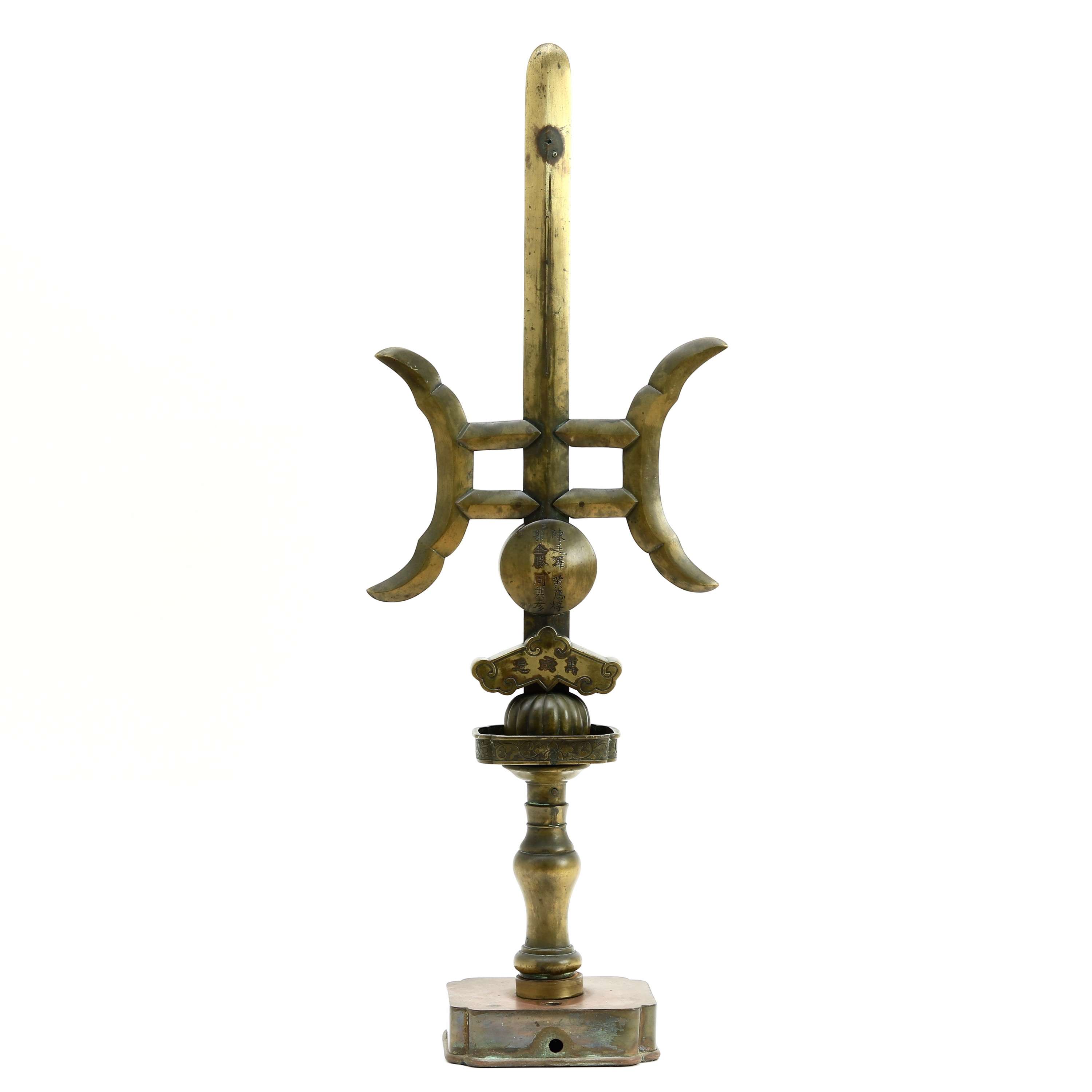 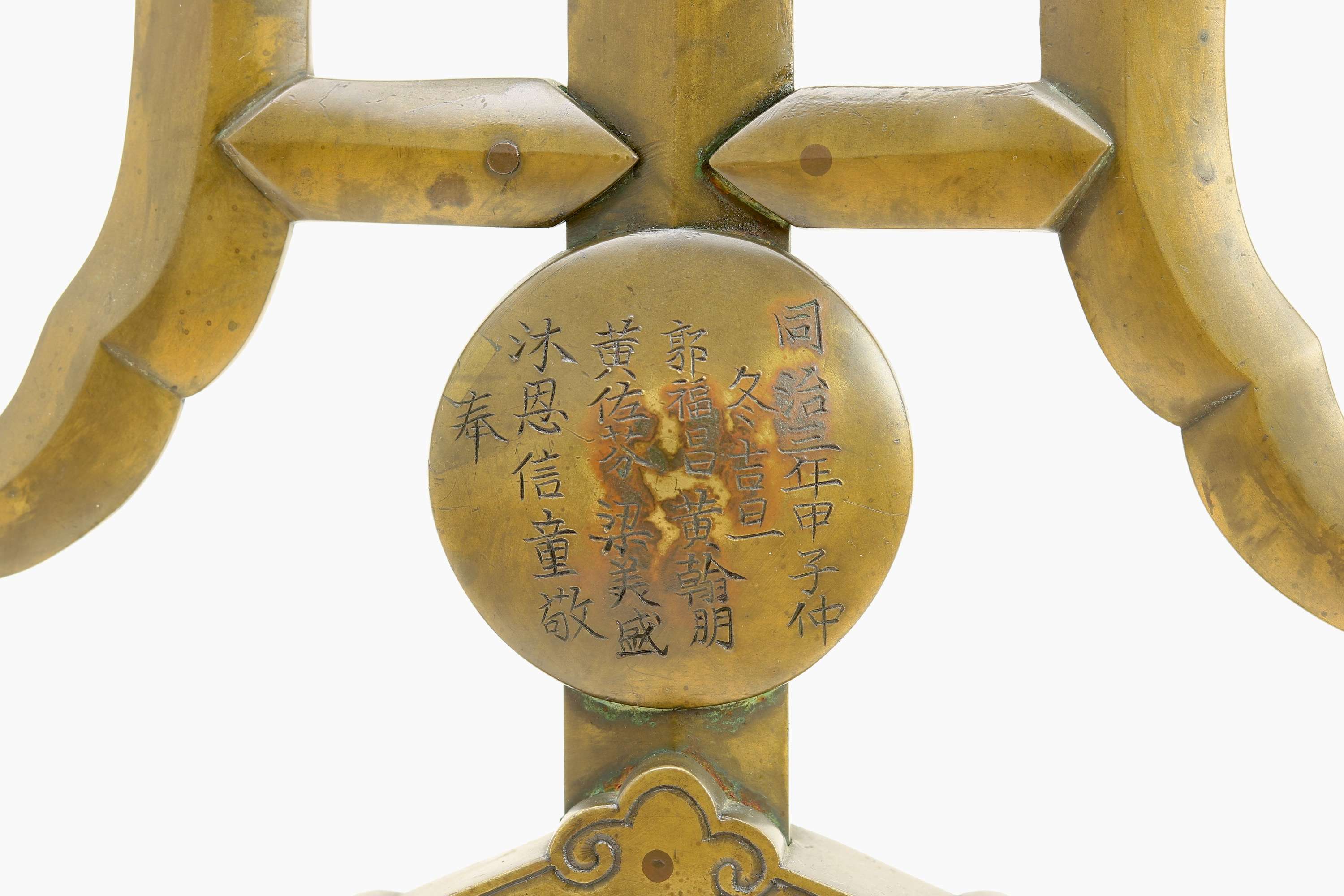 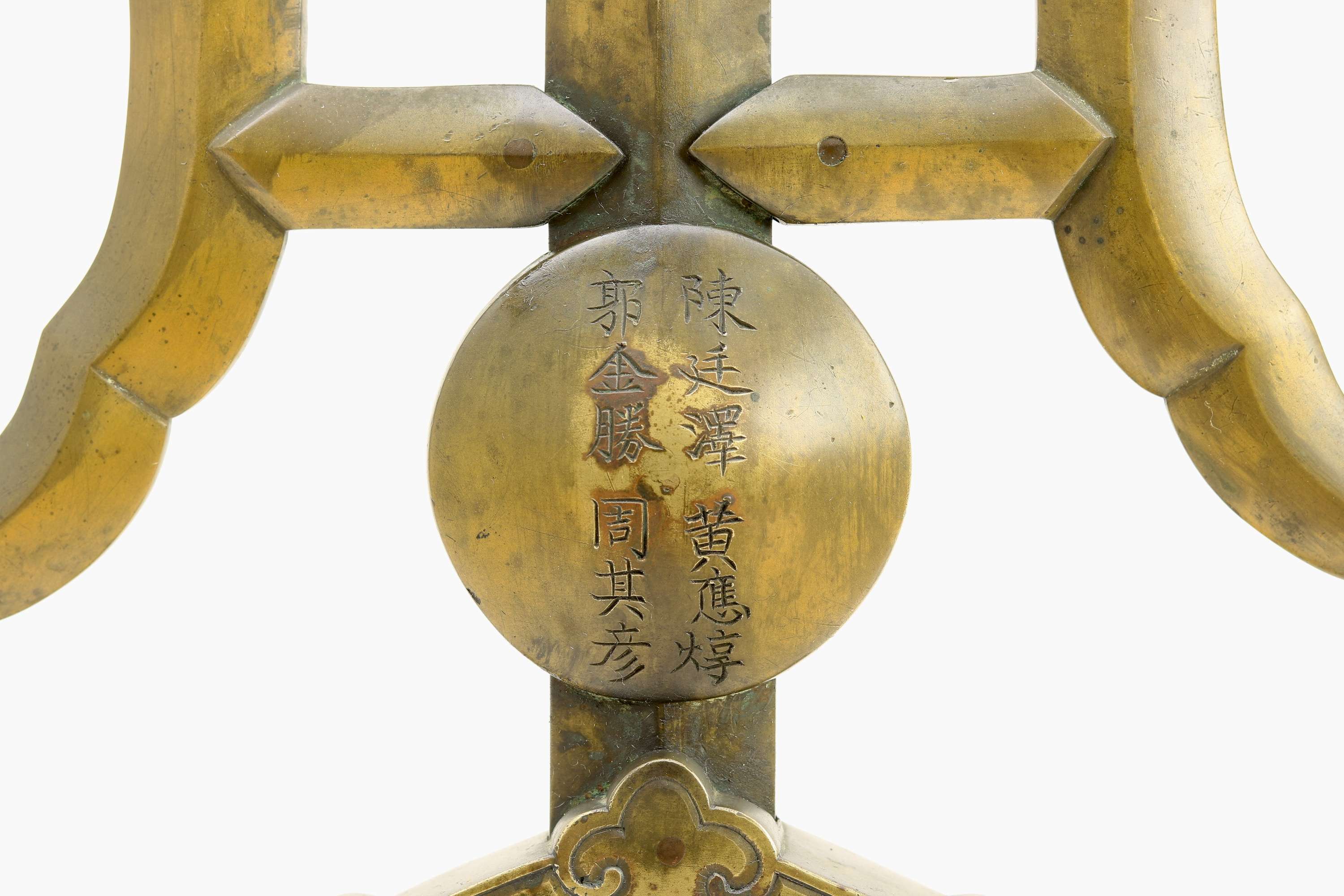 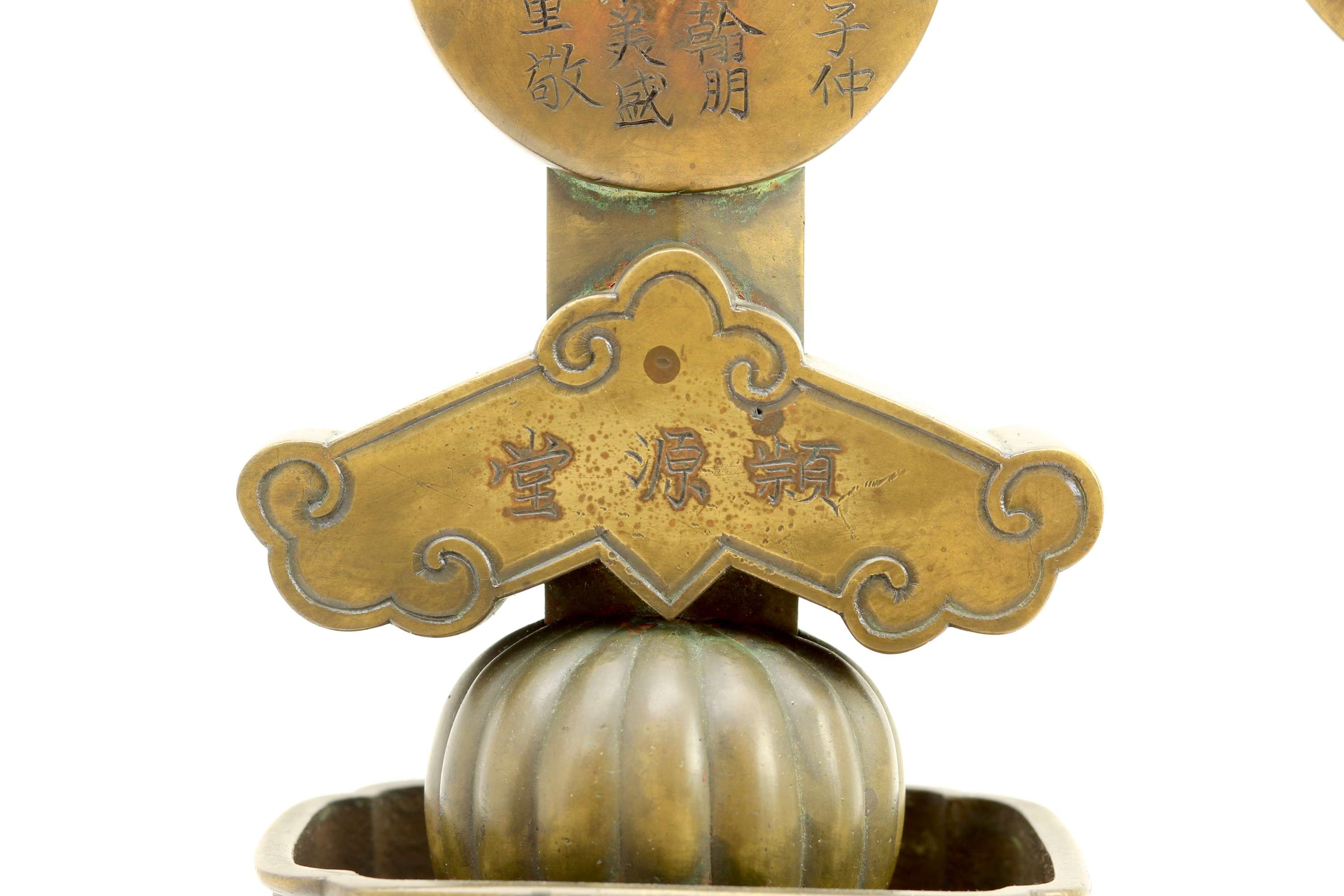 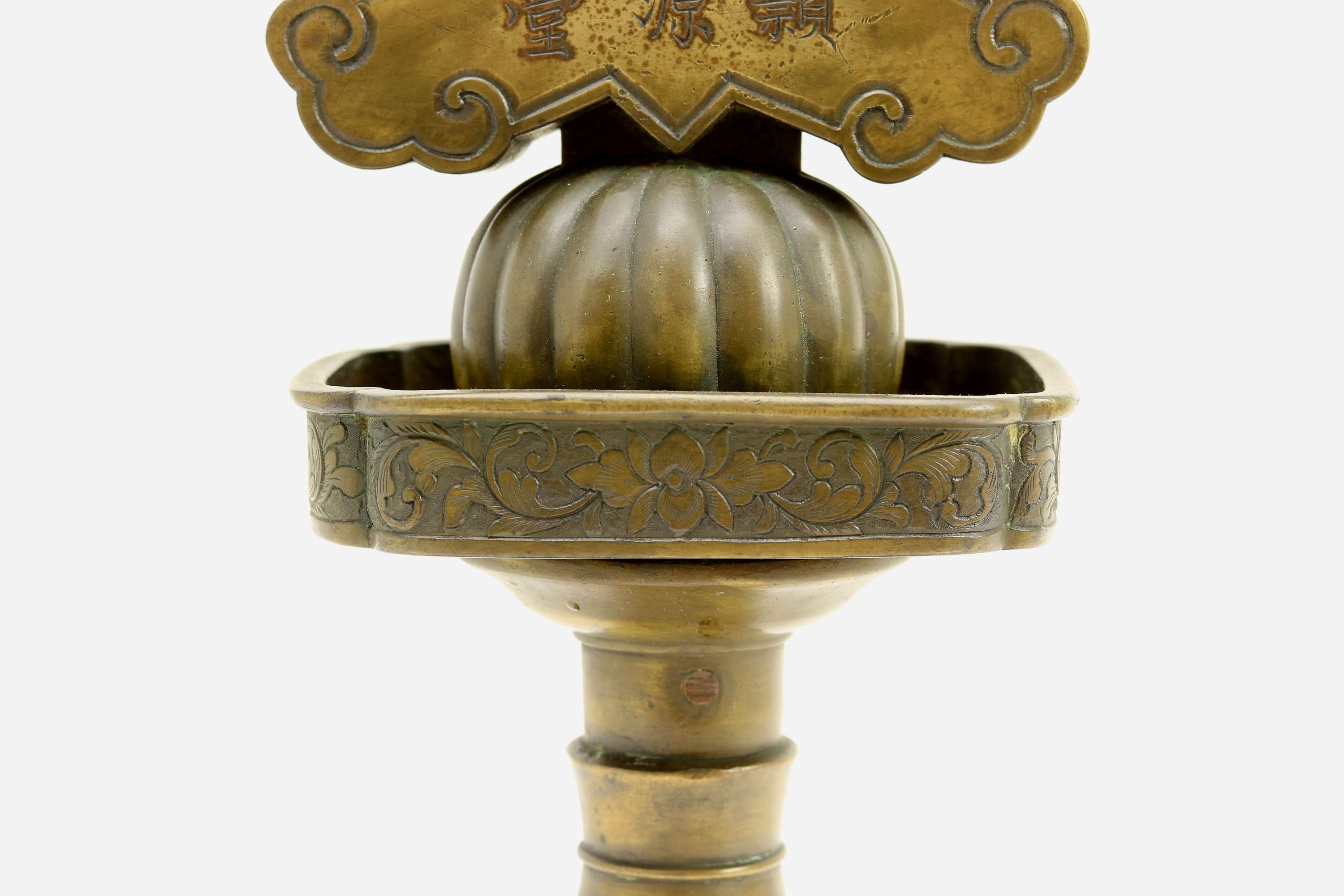 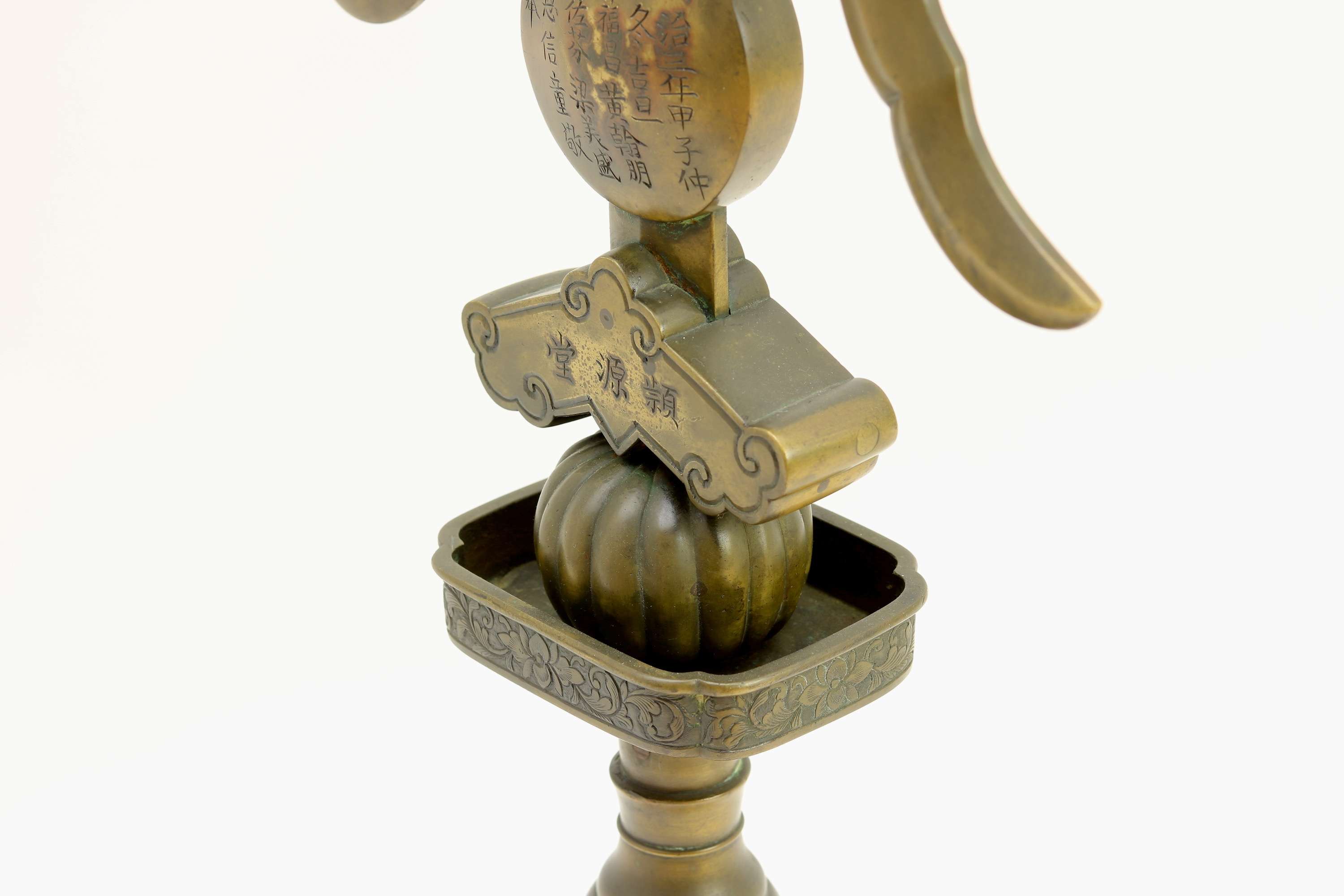 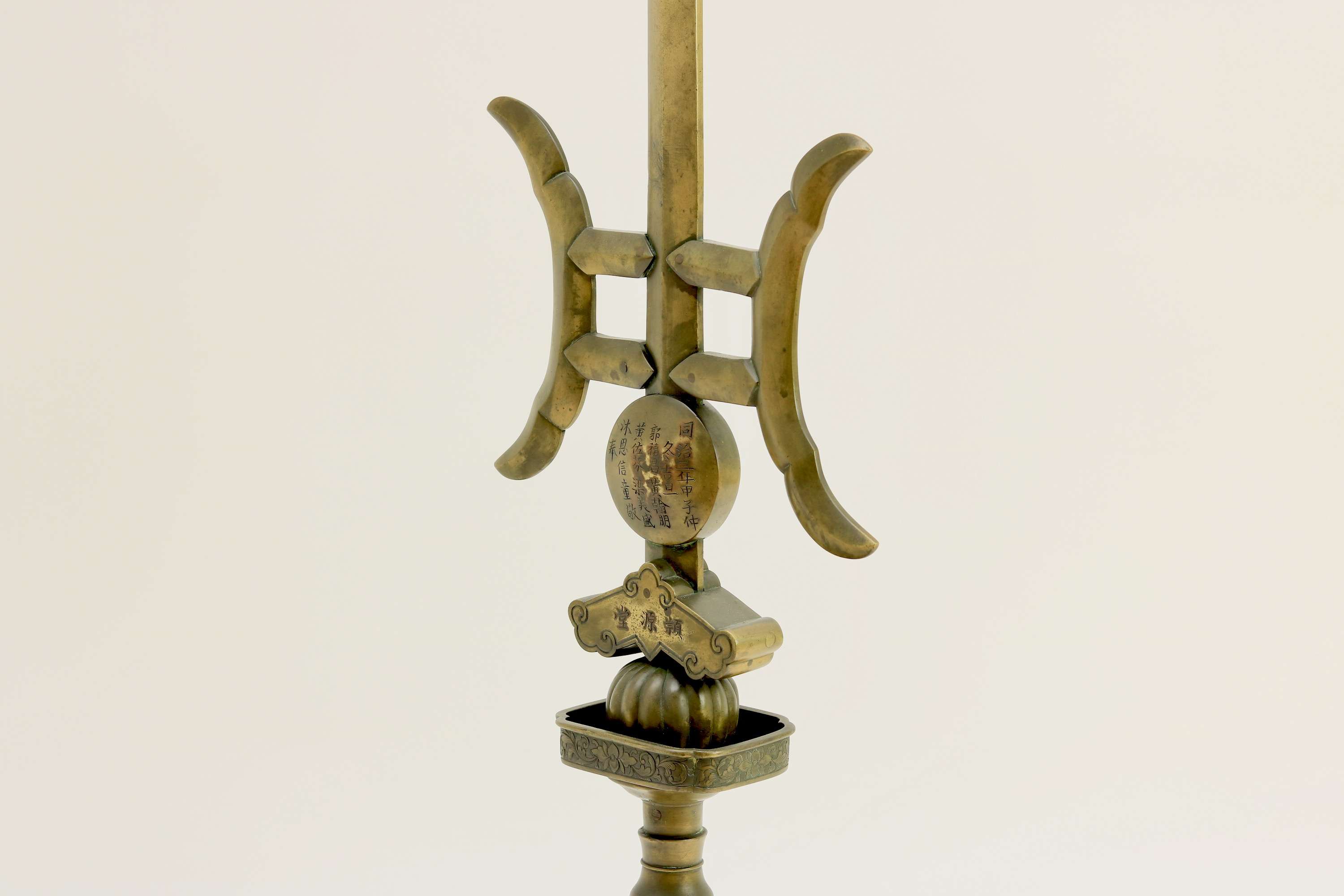 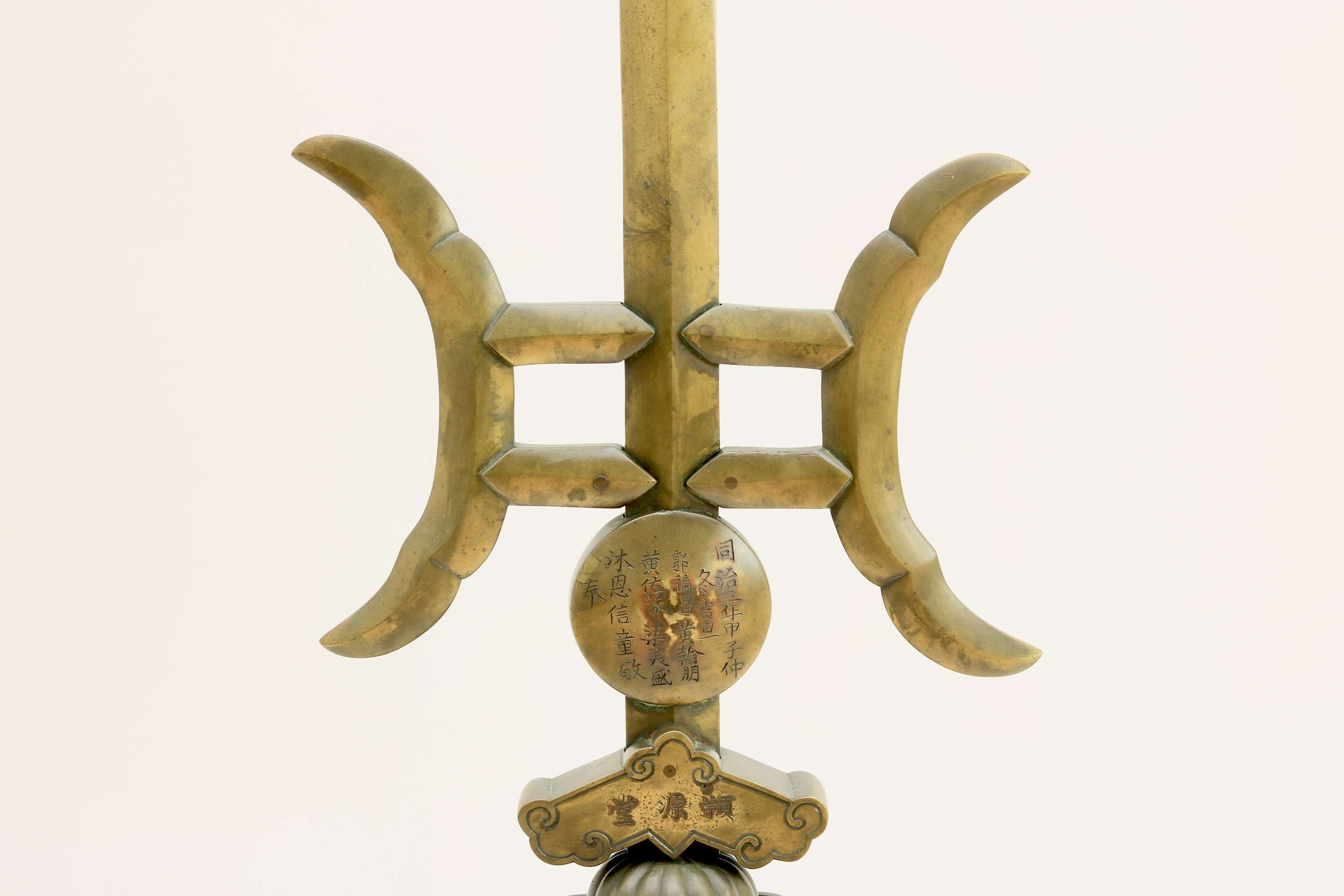 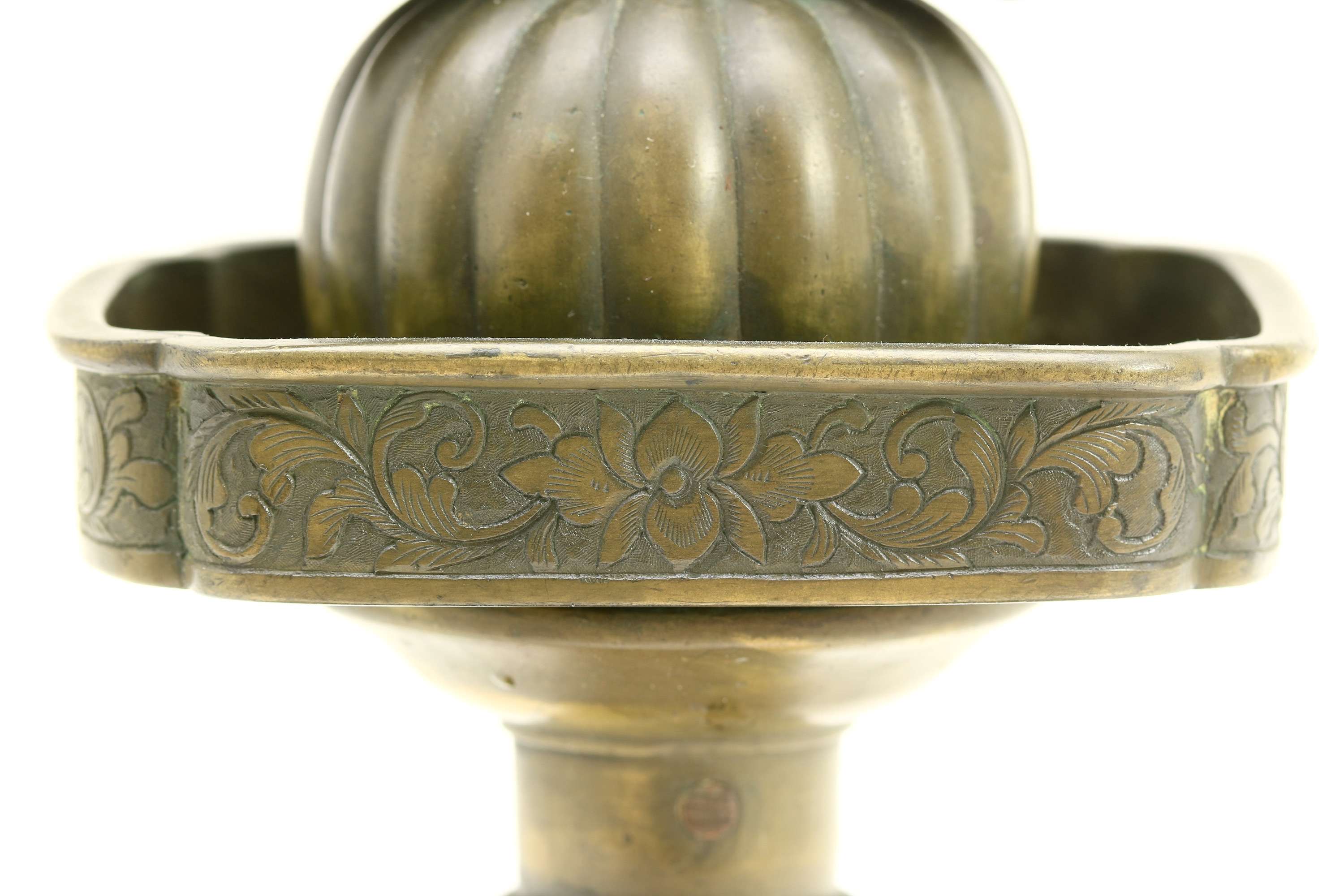 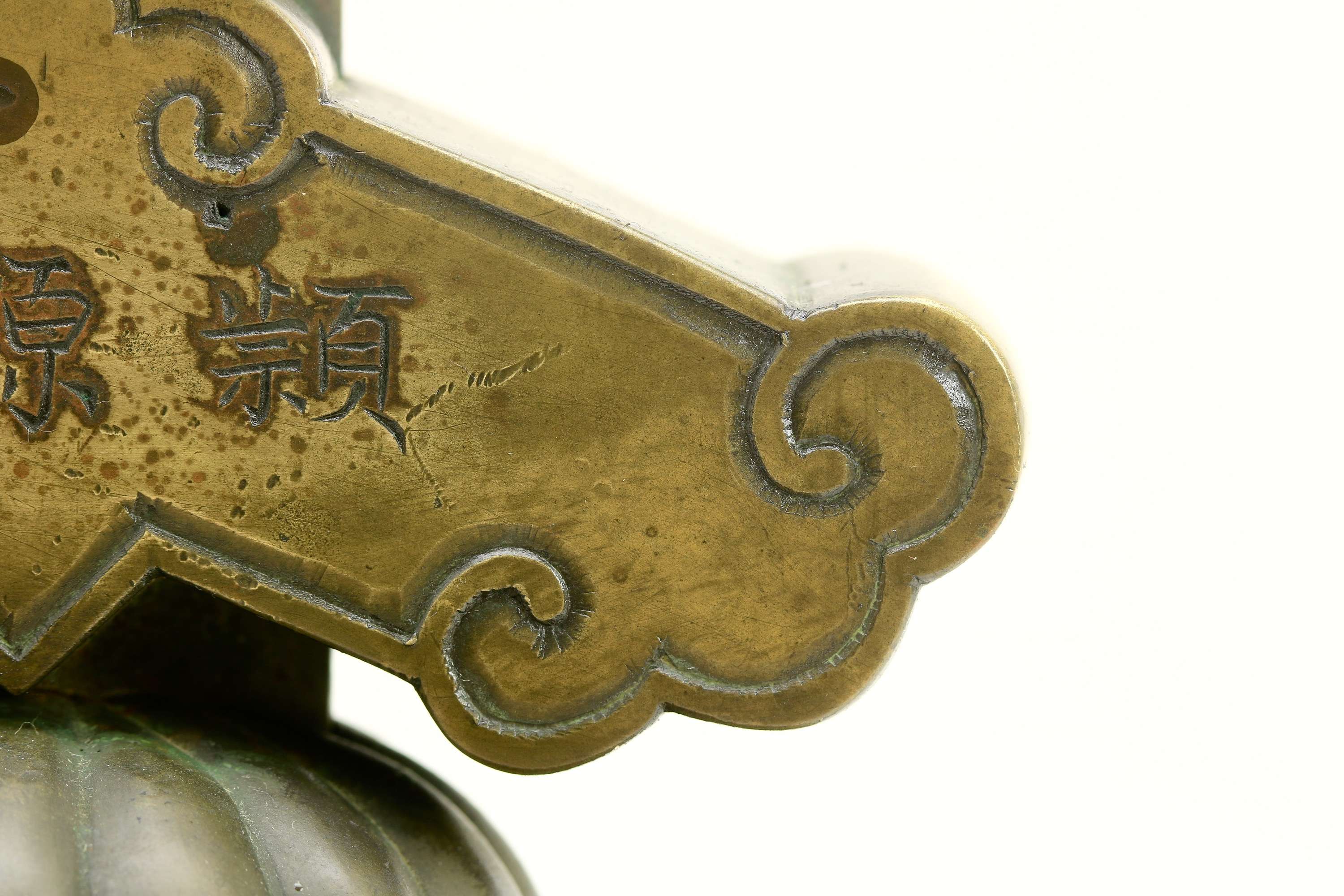 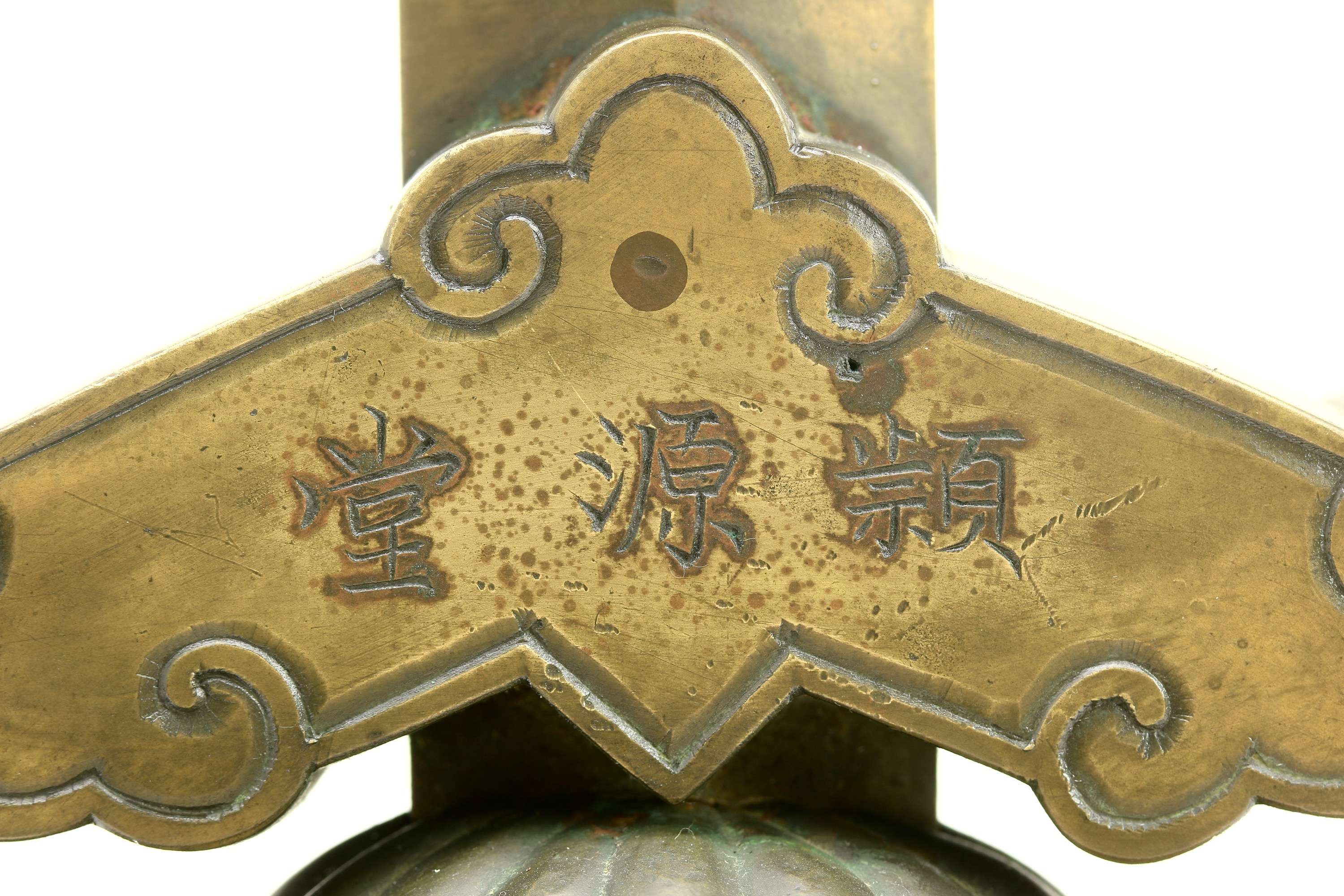 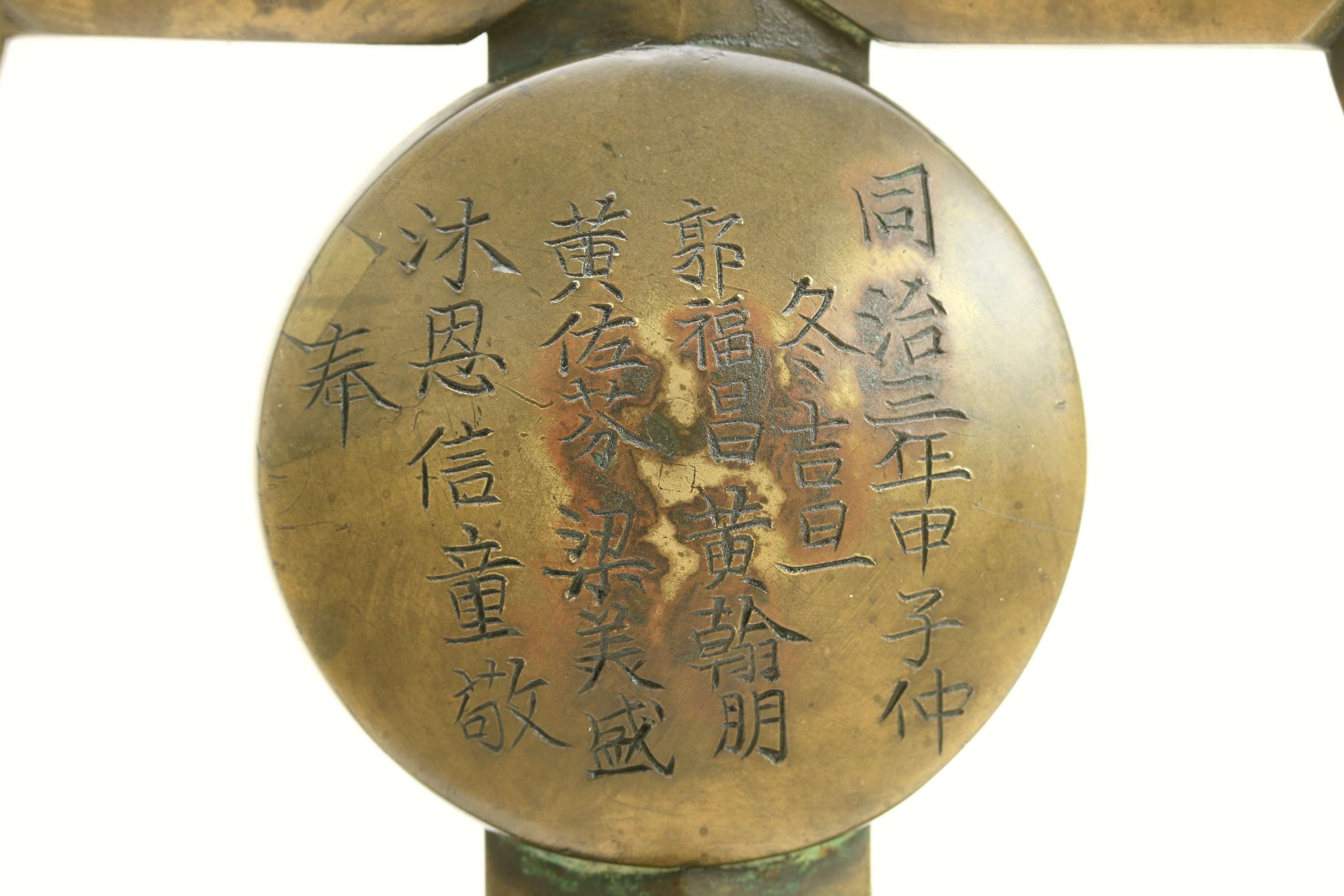 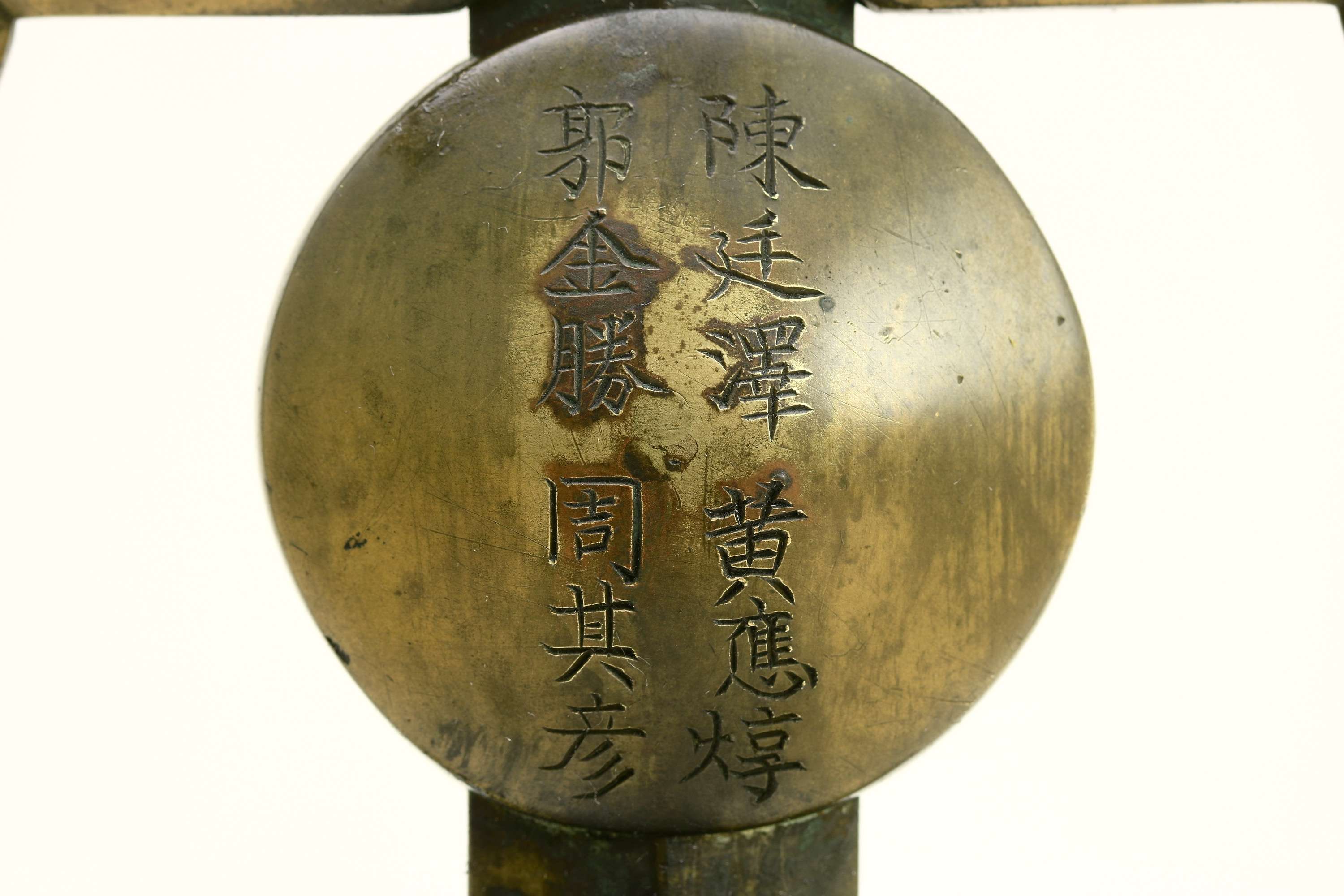 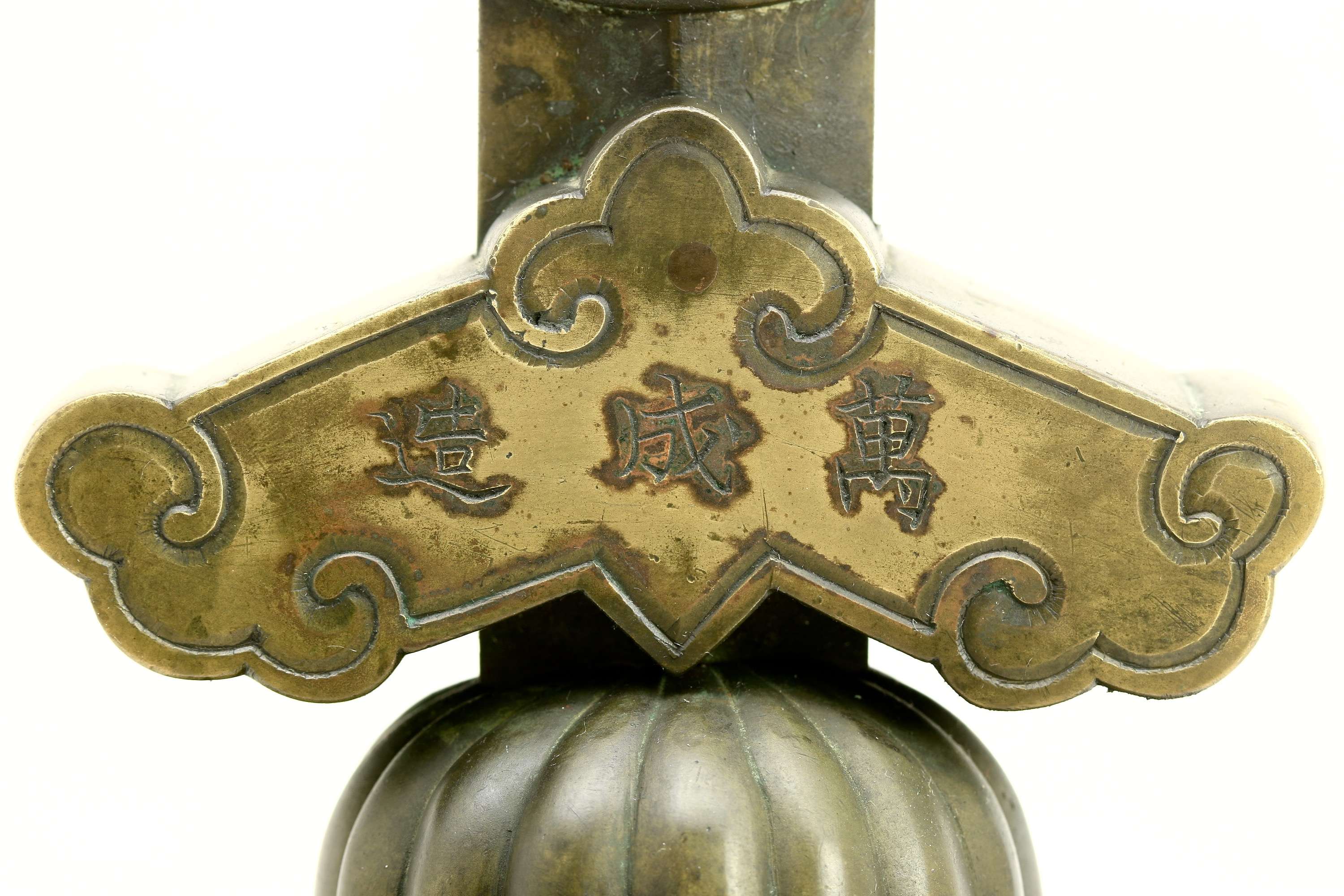 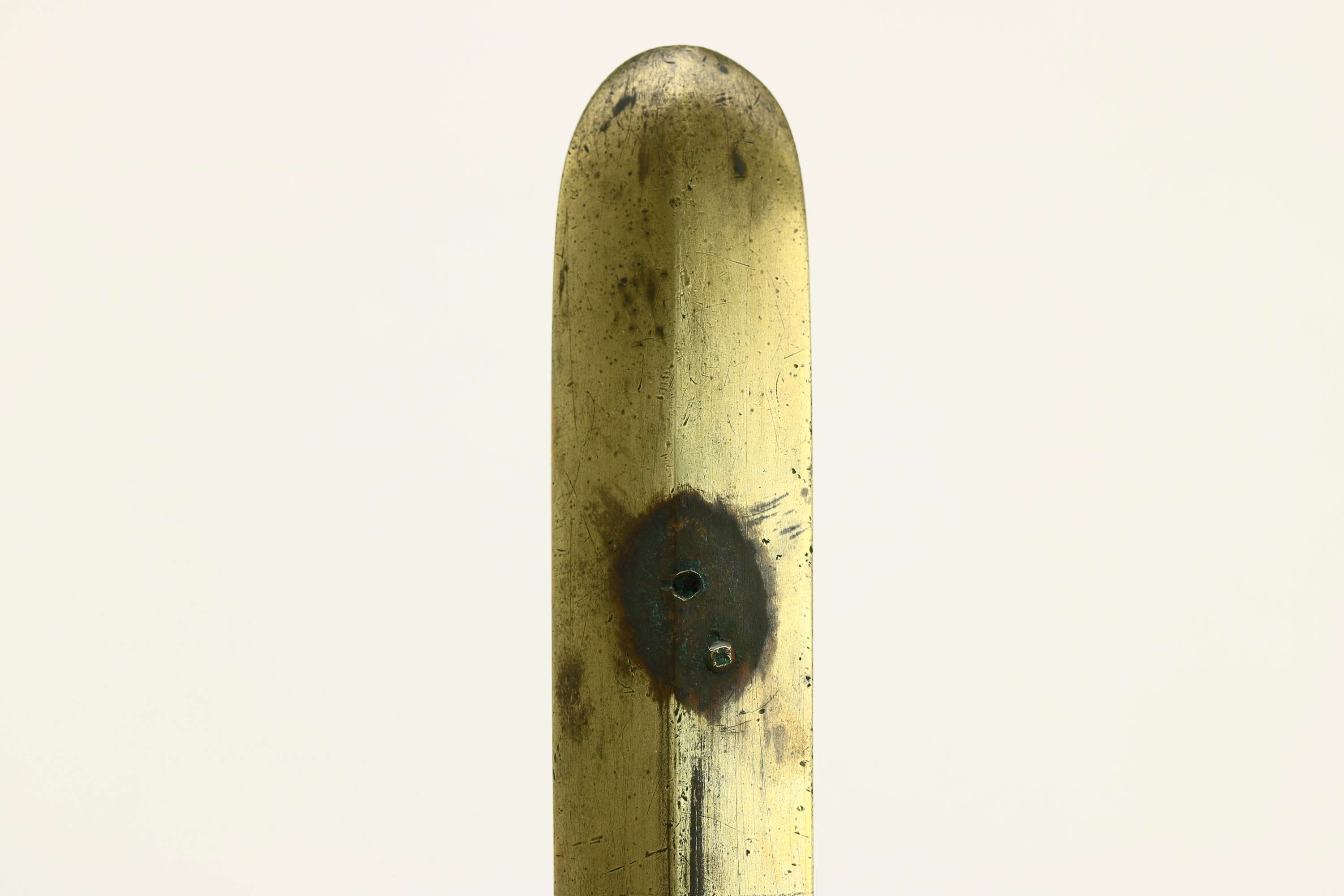 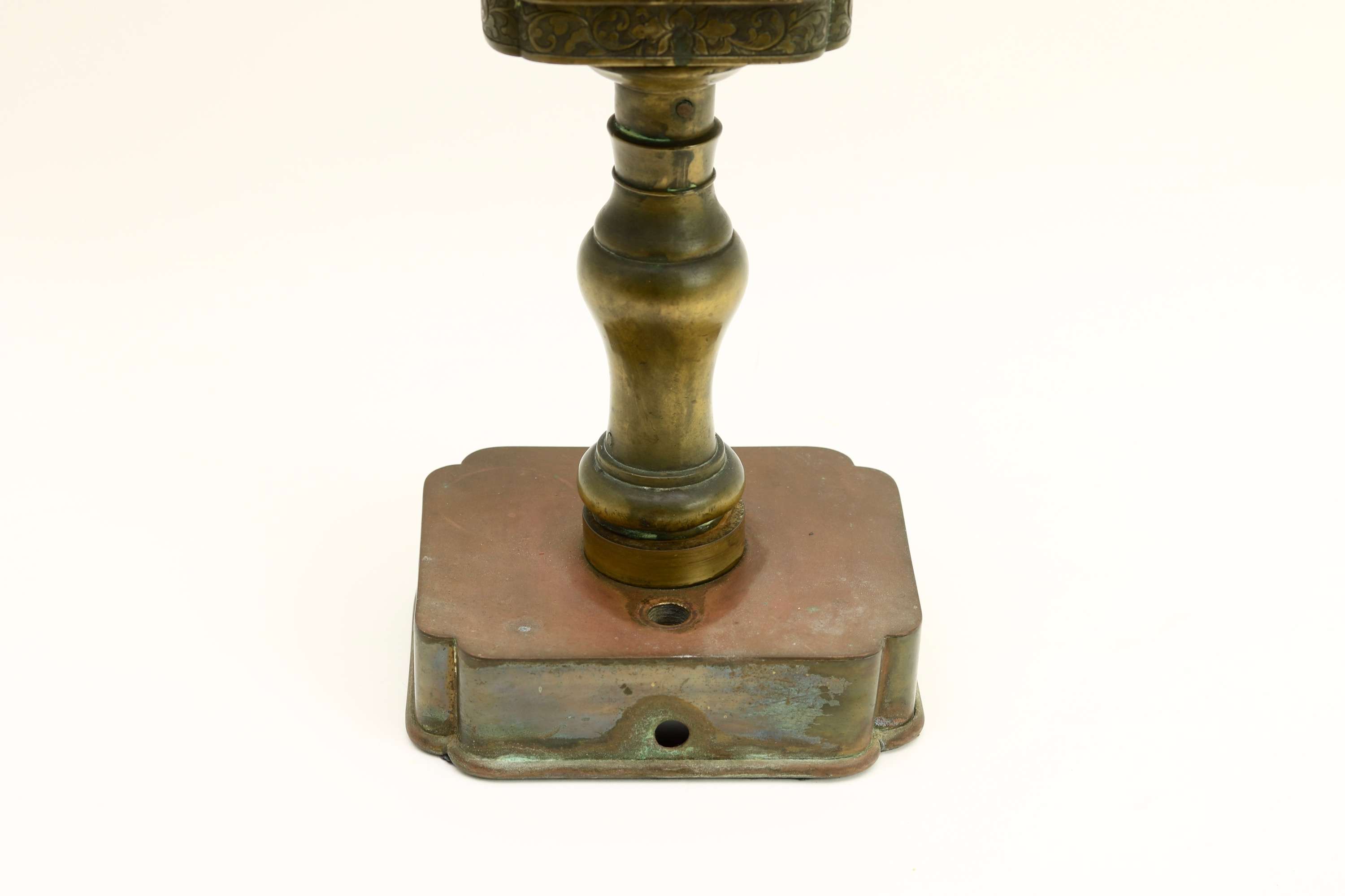 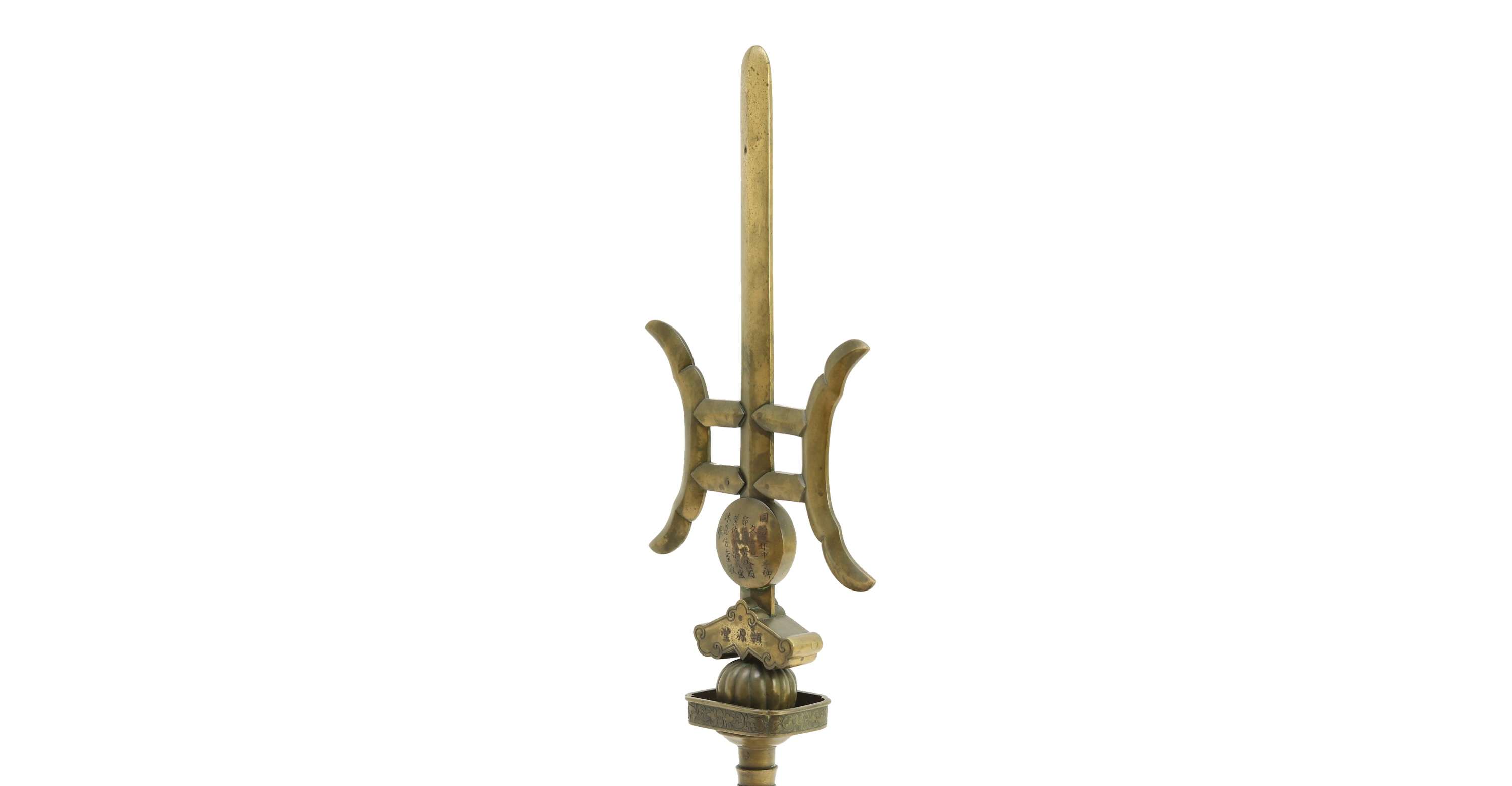